Military exercises Zapad-2021: who, when and where 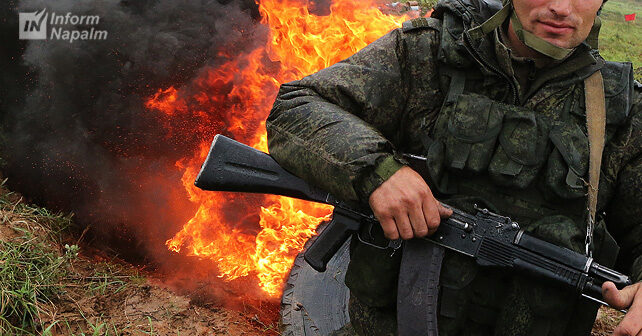 This feature is a fresh OSINT investigation from the Belarusian team of InformNapalm volunteer intelligence community. Although its editor-in-chief, journalist Dzianis Ivashin, was arrested by the KGB of Belarus on March 12, 2021 and remains behind bars as a political prisoner of Lukashenka’s regime, our Belarusian volunteers are only stepping up their activity. On June 28, a new OSINT investigation was published by the Belarusian team of InformNapalm on the topic of the Russian exercises Zapad-2021 planned near the borders of Ukraine and several NATO countries.

On June 21, on the Belarusian governmental procurement portal goszakupki.by, an auction was announced for the provision of “transportation and forwarding services for the organization and performance of transportation of personnel and cargoes by rail across the territories of the Russian Federation and Kazakhstan” (archive). The client is the Ministry of Defense of Belarus.

These services are apparently needed to deliver military equipment and personnel from Russia and from the training grounds of the Russian Ministry of Defense in Kazakhstan to Belarus, and from Belarus to Russia and Kazakhstan in connection with the major military exercises Zapad-2021, which will be held from 10 to 16 of September. 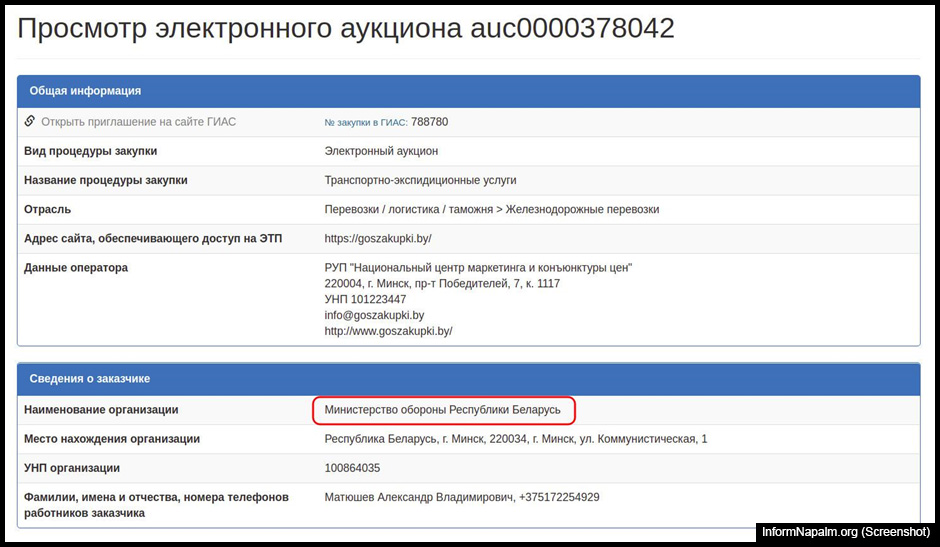 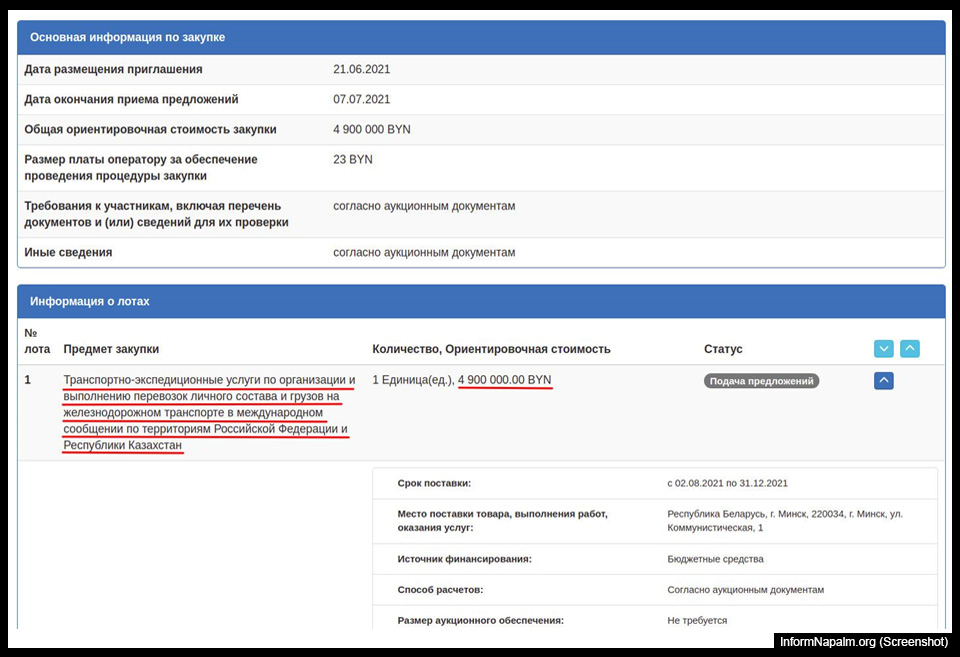 This auction must result in two contracts for forwarding and transportation services. The term for the performance of services for both draft contracts is indicated until December 31, 2021.

For convenience, we will call them “Contract 1” and “Contract 2”. Contract 1 provides for the transportation of military equipment and personnel by 670 wagons (screenshot).

There is Annex 1 to the Contract 1, Preliminary plan for military interstate rail transport for 2021, which clearly shows in which directions, military cargo and servicemen will need to travel (screenshot) back and forth.

This annex mentions two railway stations in Russia and one station in Kazakhstan.

In addition to the fact that there is a training ground in Mulino, the 6th Armored Brigade (military unit 54096) is also based there. This brigade is part of the 1st Tank Army, which according to sources, will participate (archive) in the Zapad 2021 exercise. 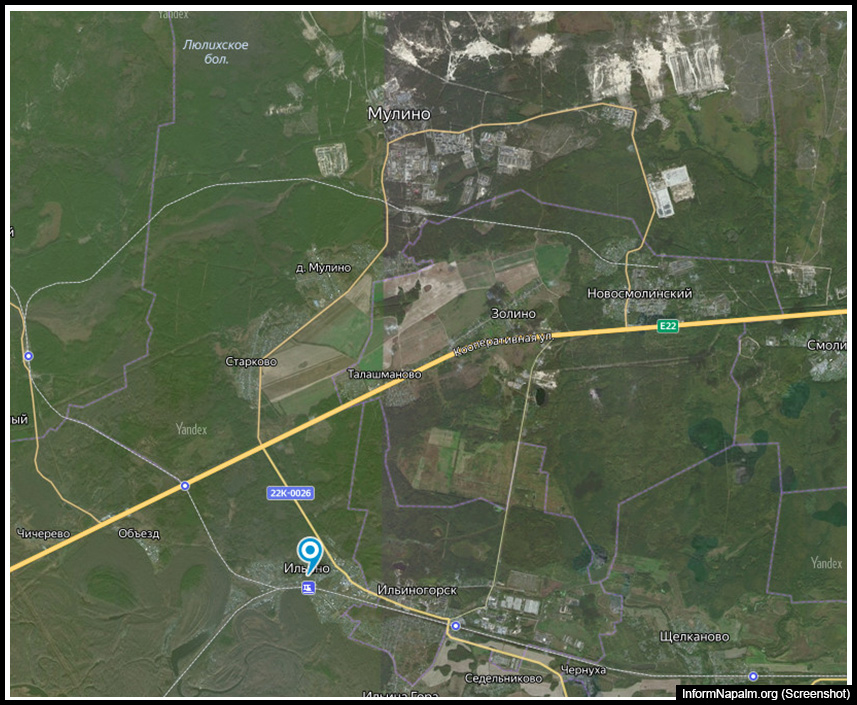 The second Russian station is Ashuluk (Astrakhan Oblast), located near the military training ground (archive) with the same name. 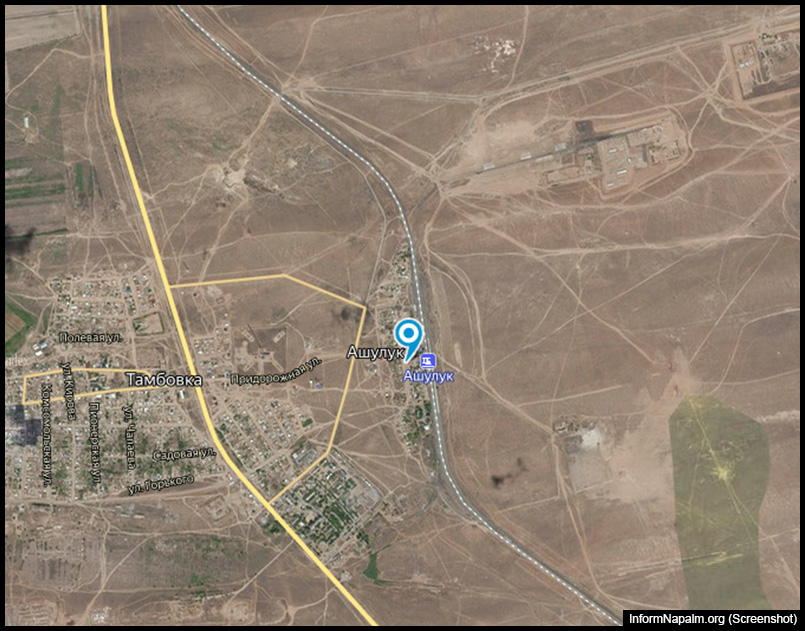 And the Koktas railway station (Kazakhstan, Karaganda Oblast) is located near the Sari-Shagan military training ground. Now this training ground is in posession (archive) of the Russian Ministry of Defense. 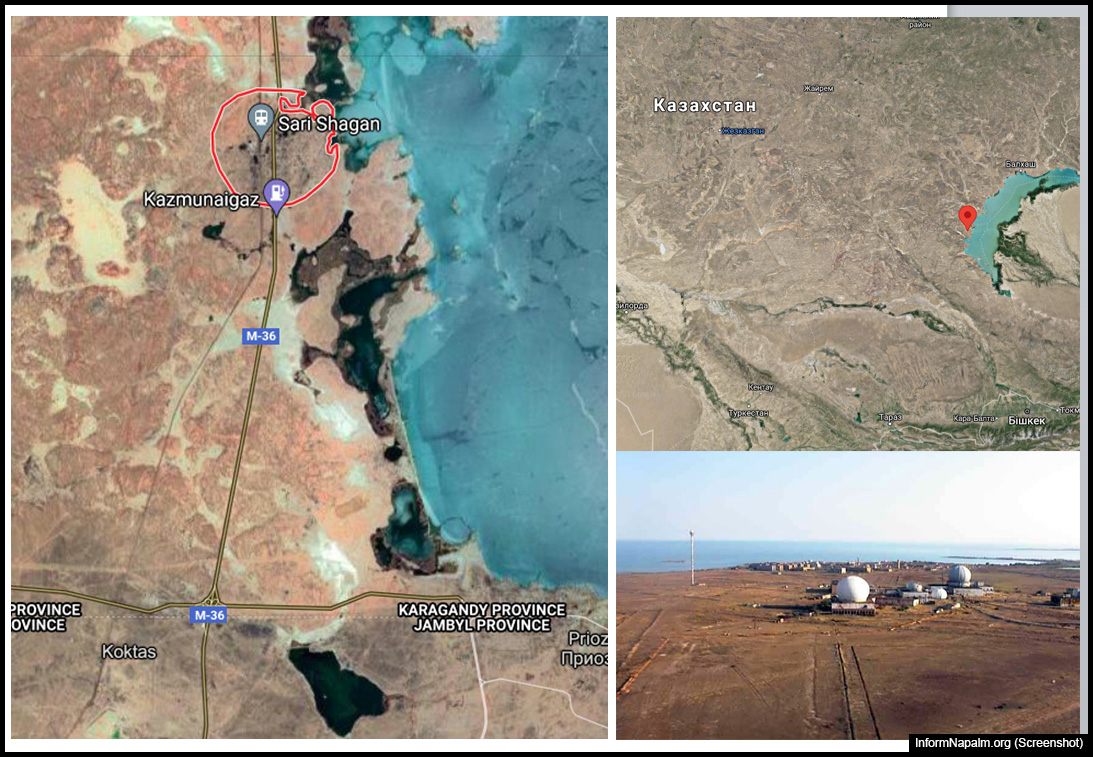 The annex to the contract shows how many wagons are allocated for each direction. 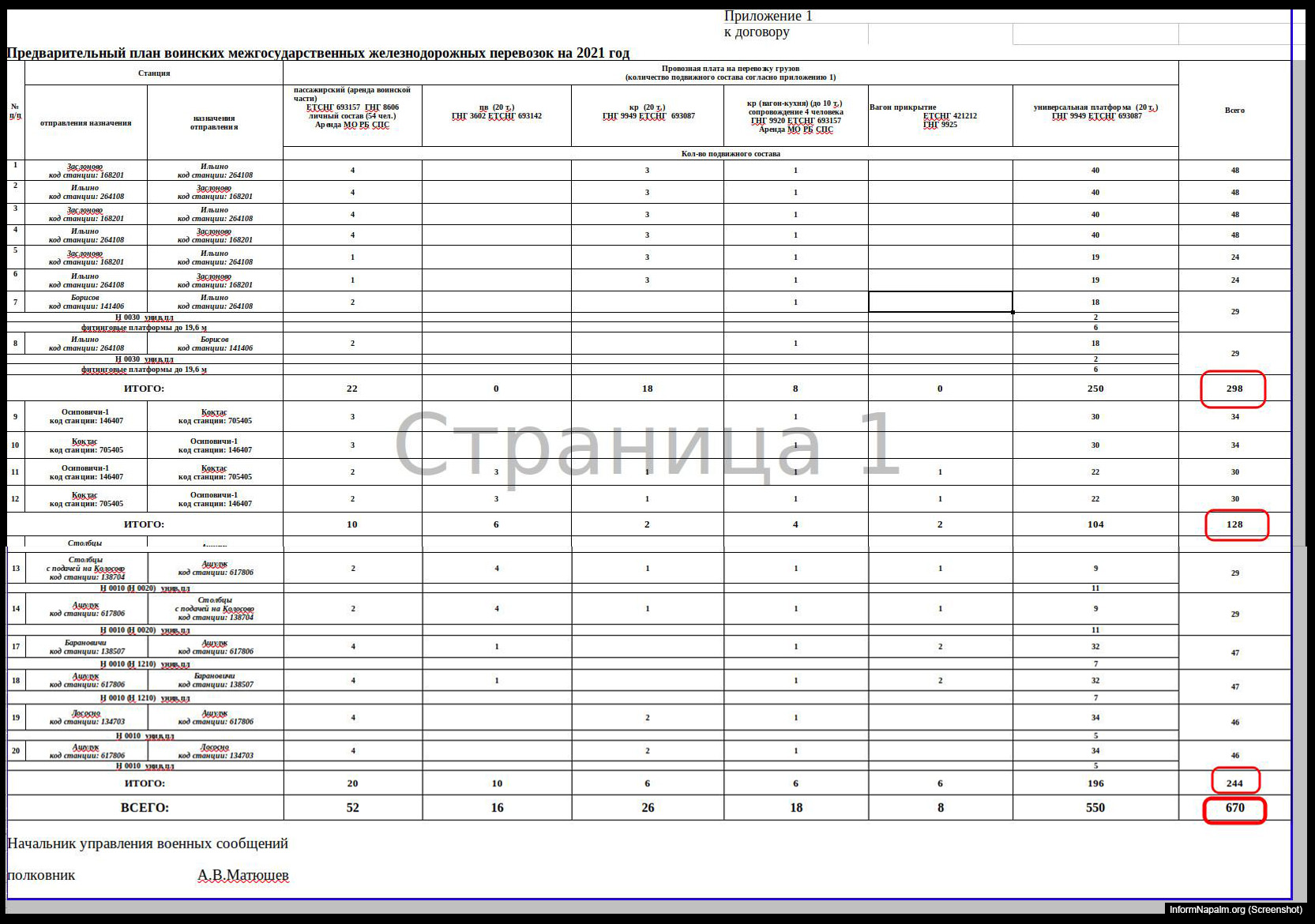 Contract 2 provides for the transportation of equipment and military personnel in 114 wagons (screenshot).

At the same time, in spite of the fact that the auction has only just begun, the details of the forwarder are already indicated under the company details in white print, in Contract 2. This is the state enterprise BTLC (archive). This may indicate that, the counterpart has already been selected. 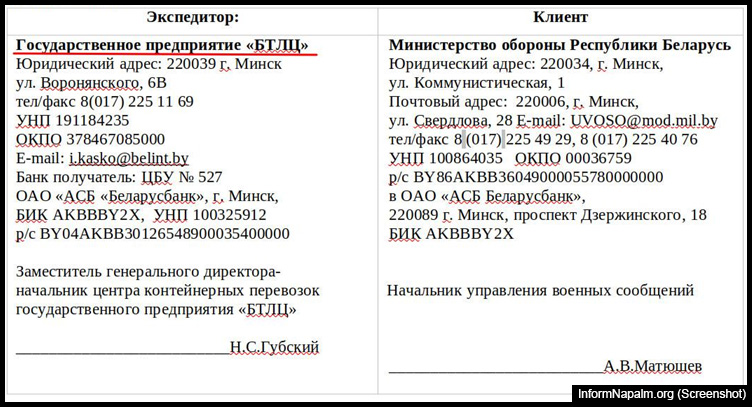 There is also Annex 1 to Contract 2, Preliminary plan for military interstate rail transportation for 2021, where it is clearly visible in which directions military cargo and military personnel will travel back and forth.

Firstly, this is Tunnelnaya station (Krasnodar Krai) which is located within the boundaries of the city of Novorossiysk. The 7th Air Assault Division (military unit 61756) is based in Novorossiysk. Investigations about this military unit are collected in the InformNapalm database of the Russian military aggression against Ukraine.

Secondly, this is Selyatino station (Moscow Oblast), near the city of Naro-Fominsk. 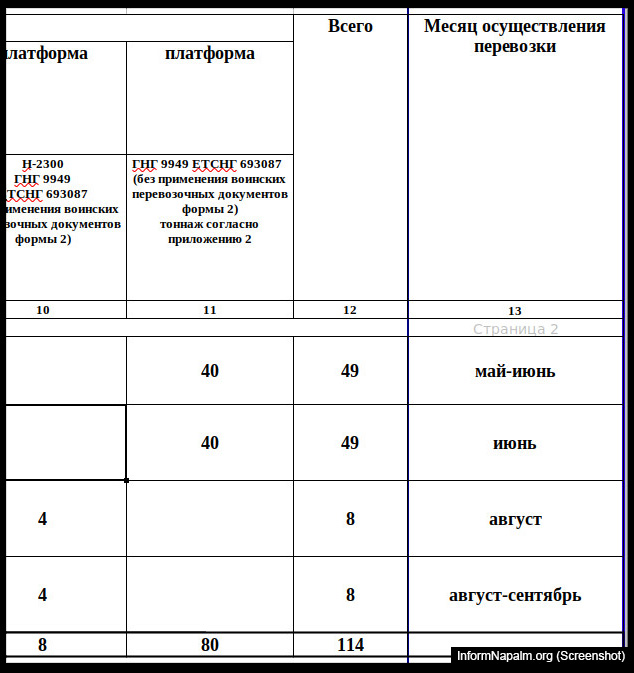 As for Russian military equipment and personnel, the specified documents attached to the auction announcement show us their exact destinations.

According to the plan, Zapad-2021 exercises will cover almost the entire territory of Belarus. There will be five areas of arrival: Minsk (Barysaw, Ozerishche), Viciebsk (Viciebsk, Zaslonava, Stolbtsy), Mahilioŭ (Osipovichi), Brest (Baranavichi) and Hrodna (Lososna).

It is obvious that such a large coverage by the troops of the hybrid aggressor country carries a direct and immediate threat to the independence of Belarus.

Civil society should carefully record all movements of the occupiers across the territory of Belarus, as well as monitor possible cases of hidden deployment of any part of the military personnel and military equipment of the Russian Armed Forces after the end of Zapad-2021 exercises. 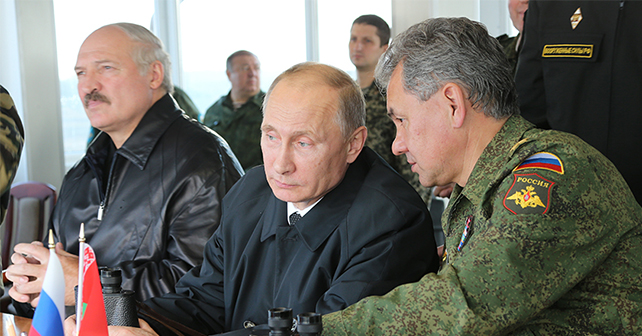 The OSINT investigation was prepared by the monitoring service of the Belarusian editorial team of InformNapalm international volunteer community. Translated by Andrii Gryganskij, edited by Artem Velichko.  Distribution and reprint with reference to the source is welcome! (Creative Commons — Attribution 4.0 International — CC BY 4.0) InformNapalm social media pages:

No Responses to “Military exercises Zapad-2021: who, when and where”