Identified: Zaza Khasia, member of the Putin Martial Arts Club, who was previously spotted in Donbas 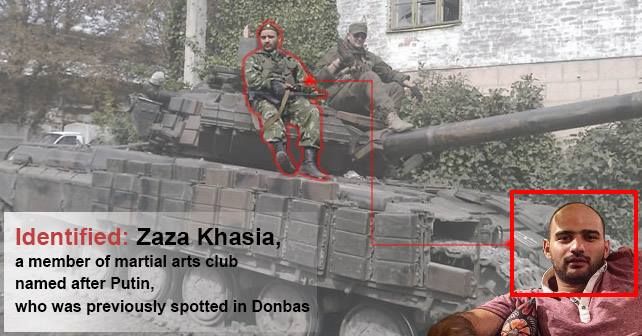 Dedicated to the ‘hero’ of the inglorious war of 2014, Russian citizen of Georgian origin Zaza Khasia, in memory of the 3rd anniversary of his participation in the undeclared war of the Russian Federation against Ukraine

Most of the OSINT investigations of InformNapalm international intelligence community are based on the primary information provided by our readers – Ukrainians, Georgians, Belarusians, who shared with us interesting materials. This publication is no exception. If it were not for the primary data from our friends, we would not have learned about the new ‘Bagration’ and pride of Russia who raised arms against the fraternal nation.

On February 23, 2017, on VK social media website, a Defender of the Fatherland Day greeting was posted with hashtags #Georgians #February23 in the Georgian diaspora in Moscow group. Of the six photos of the ‘defenders’, our attention was drawn to a photo of an armed militant in a camouflage uniform and beret, a tactical vest and a machine gun against the backdrop of a T-64 tank. 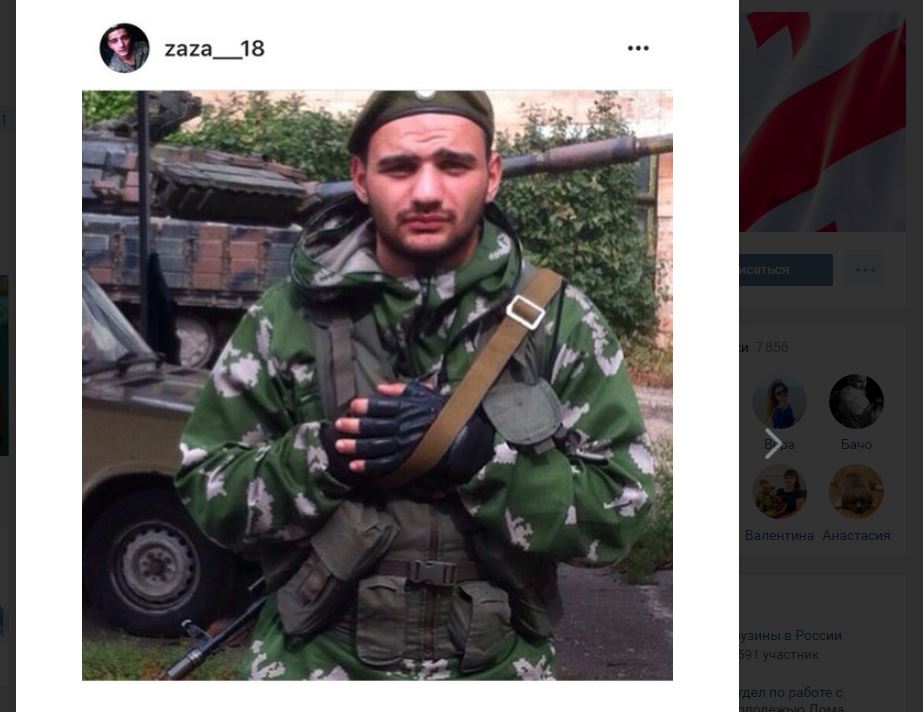 There were several reasons that prompted us to find out more about this photo. First and foremost, the out-of-regulation appearance of the ‘defender’ of the Russian Federation, who looks more like a mercenary-militant of Novorossiya, and, of course, the T-64 tank.

Note: Ukrainian T-64 tanks were actively used by Russian-terrorist forces in the Donbas at the initial stage of the conflict. The reason for their use is trivial: to disguise the Russian presence and to make it look like all the equipment transferred from Russia was supposedly captured by ‘rebellious miners’ from the Ukrainian military. Indeed, some of these machines were seized from the Ukrainian Army. However, a large number of T-64 tanks were deployed to the east of Ukraine from Russia (see Fig. 1, 2, 3, 4), where there are hundreds of them are in conservation at storage bases. After a while, ‘separatists’ started using T-72 tanks, as well as other Russian weapons and equipment, which were no longer possible to disguise as captured.

According to military experts advising InformNapalm, the photo above most likely shows a tank captured from the Ukrainian Armed Forces, as evidenced by the specific pain job. Though, machines of this type were transferred from Russia as well. In any case, the photo of the militant with a T-64 on the background was taken in the Donbas. 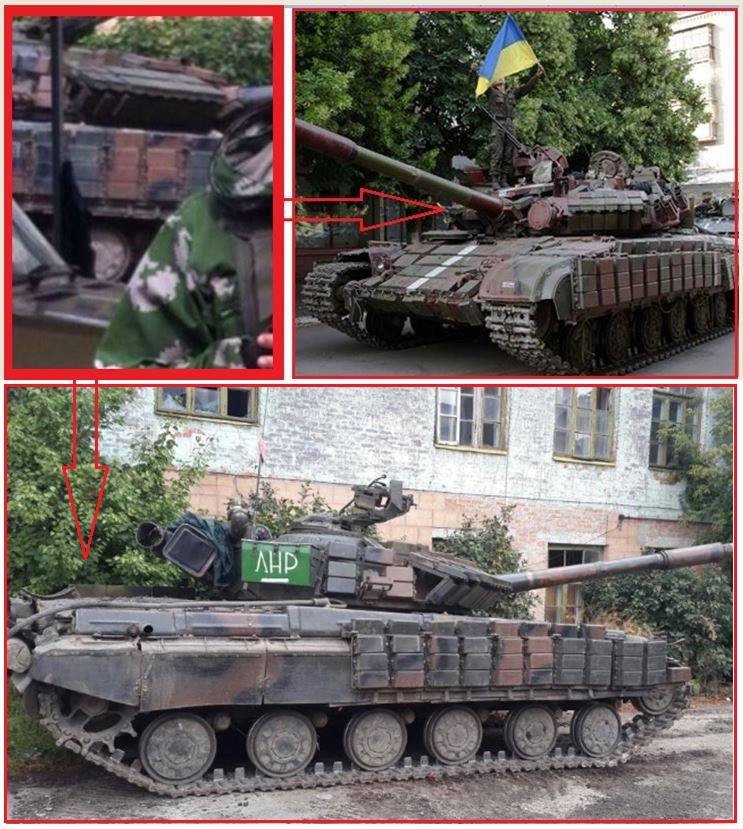 We found a photograph of this particular tank, against which the militant poses, on the Lost Armour website. Moreover, there we found a photo of the T-64 with two militants sitting on it, and again one of them is the main figure of our OSINT investigation. The photo was taken in the same place as the first picture that attracted our attention. 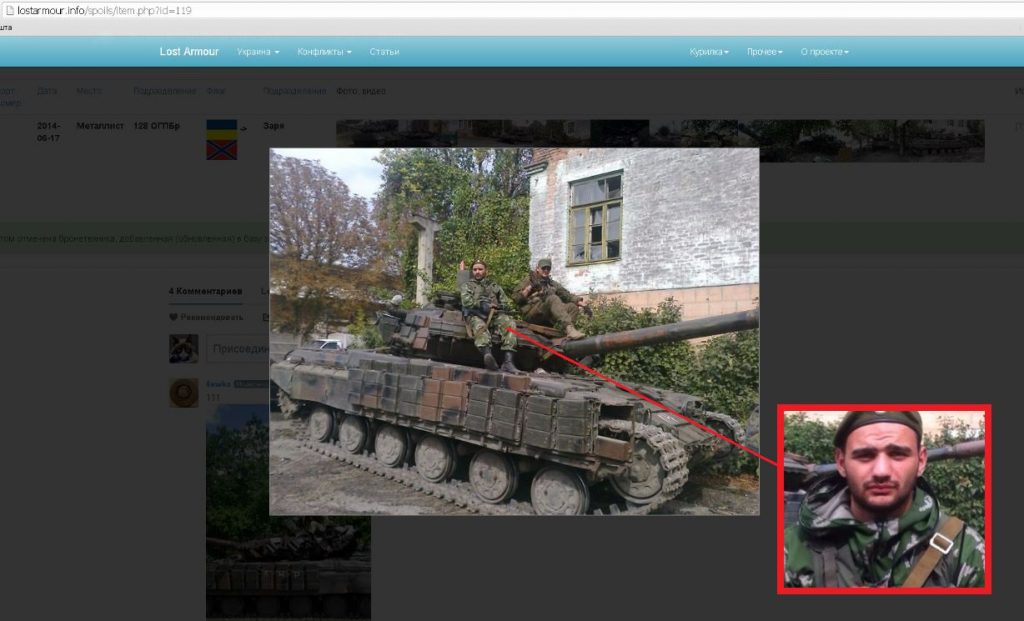 According to the Lost Armour records, the first time the T-64BV tank was spotted near the village of Metalist in Luhansk Oblast on June 16, 2014. This tank, which was listed with the 128th Mountain Infantry Brigade of the Ukrainian Armed Forces, was captured by the so-called Luhansk Zarya Battalion (IAF Russian-terrorist troops) and later was in service with the ‘army of the South-East’.

Enough of the tank and let’s get back to the militant with a nickname zaza___18 (he is on the photo). Although the posing militant was very cautious in social networks, it was not difficult to identify him. The format of the photo suggests it was posted on Instagram. Using simple combinations, several search engines and analyzing the collected information, it was possible not only to identify the subject of the investigation, but also to collect a lot of information about him. 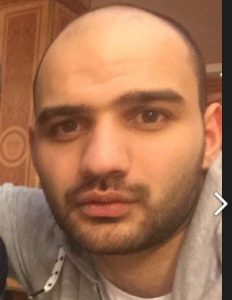 Born on December 18, 1992. A registered place of his residence is in Moscow, according to the entry in the Moscow phone database from 2010. Originally from the Samegrelo region in Georgia. 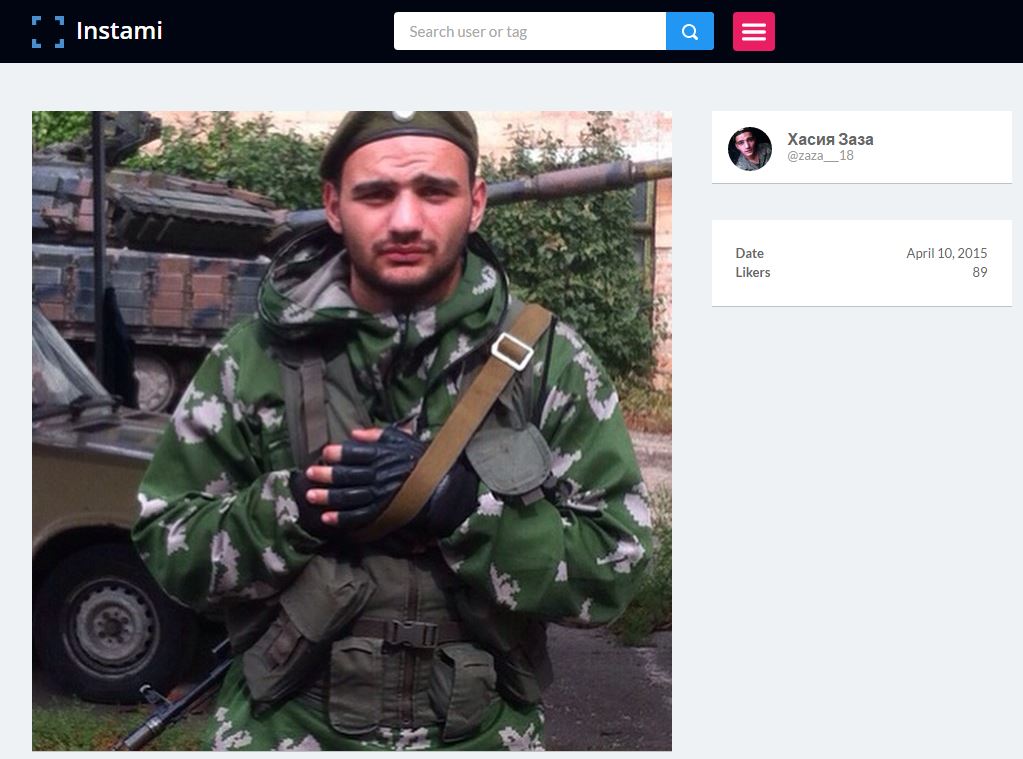 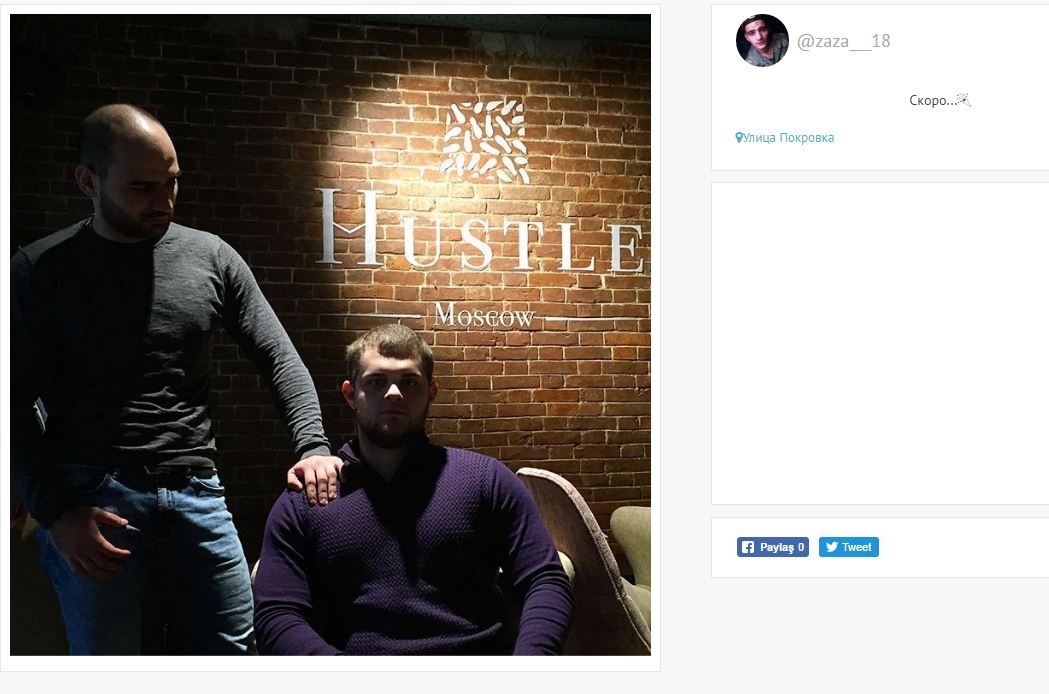 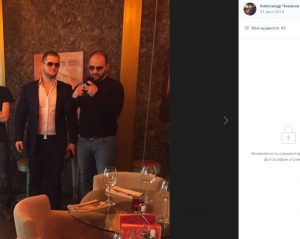 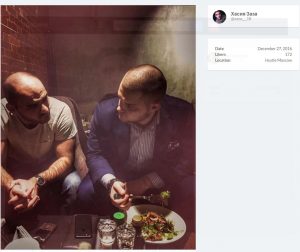 Among other Instagram photos of Khassia’s glamorous life in Moscow are a picture with a ‘For Special Forces’ hookah, made by himself, as well as a photo with his mother, Inga Khassia. 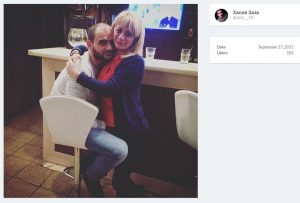 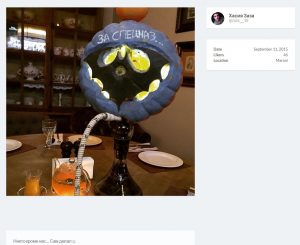 Zaza Khasia was listed as a student of the Orthodox St. Tikhon Humanitarian University, a private educational institution of higher professional education, majoring in systematic theology of the confession, in 2015 under #36 with a minimal number of points 34.

Looking at the accounts of relatives of our subject, we found another photo of Z. Khassia in the photo album of his aunt, uploaded in January 2015. Like the first one, it testifies to his deployment to the Donbas. On the second photo Khassia poses in the same camouflage clothe, with new details – a St. George ribbon arm patch and a cross that is most similar to the so-called Award Cross “For Merit to the Cossacks of Russia”. 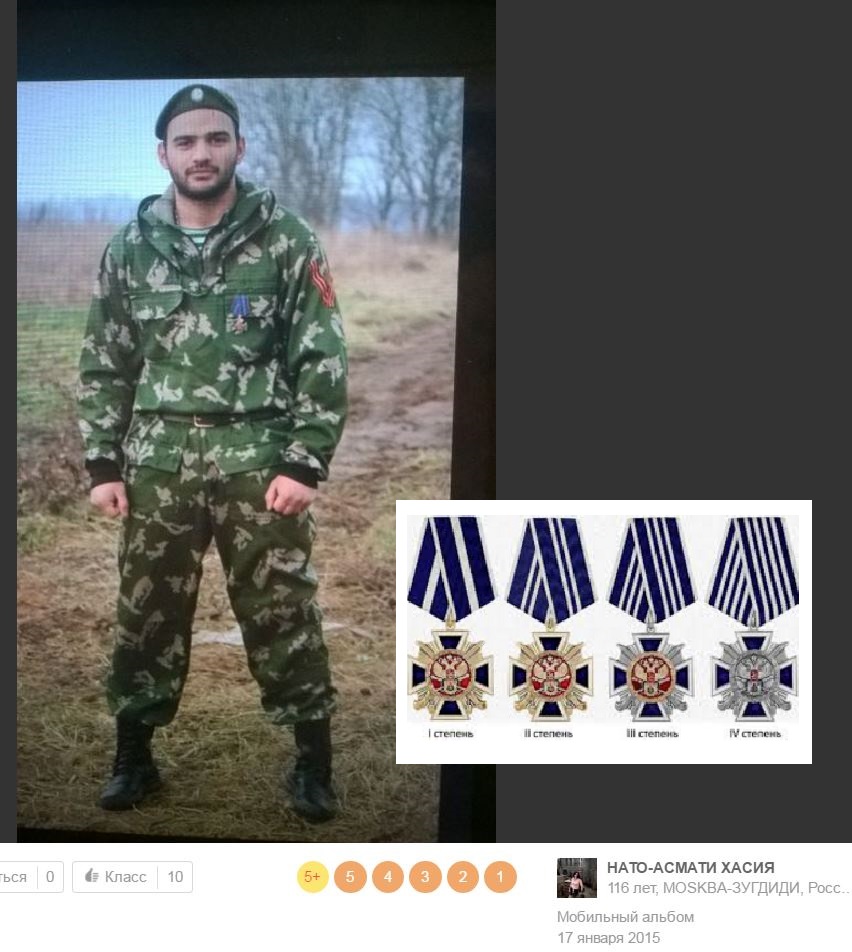 Award Cross “For Merit to the Cossacks of Russia”

Appendix No. 1 to the decision of the Council of Atamans of the Cossack societies of the Russian Federation from May 5, 2000, No. 5

About the Award Cross For Merit to the Cossacks of Russia

For Merit to the Cossacks award cross of the 1st degree;

For Merit to the Cossacks award cross of the 2nd degree;

For Merit to the Cossacks award cross of the 3rd degree;

For Merit to the Cossacks award cross of the 4th degree;

Appendix No. 1 to the decision of the Council of Atamans of the Cossack societies of the Russian Federation from May 5, 2000, No. 5

Award For Merit to the Cossacks of Russia

The most informative is Khassia’s VK profile, with his birthday: December 18. It also mentions military unit 54046 (the 9th Motorized Rifle Brigade, vil. Mulino in Volodarsky Raion of Nizhny Novgorod Oblast, Western Military District), where he served in 2012-2013. Noteworthy are the comments to many photos. 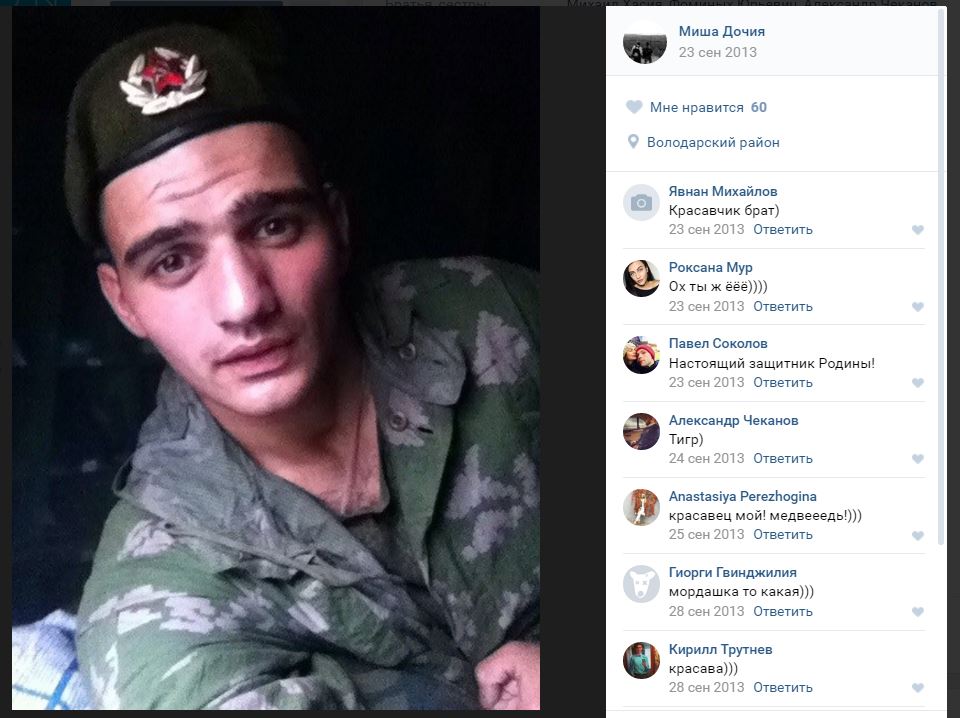 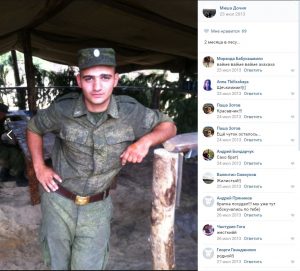 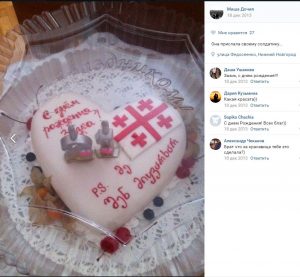 Although Zaza Khassia (aka Misha Dochia) cautiously hides his track records in social networks, judging by the photos from 2014, we can assume that immediately after the discharge from the conscript service in 2013 he signed a contract with the Armed Forces, most likely – in the intelligence unit of that very same 9th Brigade in Mulino. From there, either as a member of the unit, or as an independent “vacationer”, he was sent to the Donbas. This is indirectly indicated by the congratulatory post from February 23, 2014 with a mention of the Kubanka (a low sheepskin hat of Kuban Cossacks, which was often used by Russian military at the initial stage of the conflict in the Donbas for deception) and the photo of two militants from the back, clearly made in eastern Ukraine. 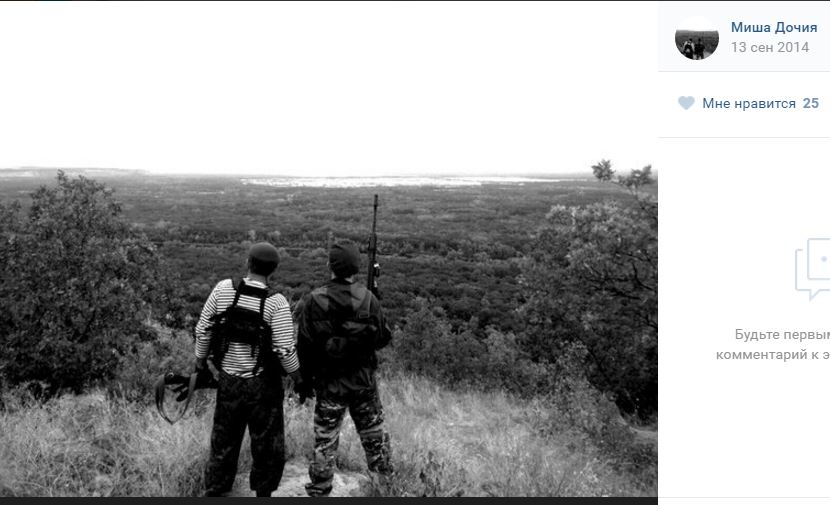 It is worth to recall our investigations from 2014, in the initial phase of the Russian aggression against Ukraine, which featured the 9th Brigade and its reconnaissance detachment, as well as the captured soldiers from this brigade.

One way or another, we can confidently say that in 2014 Zaza Khassia was in the Donbas as a ‘defender of the Russian world’. It is irrelevant, if he was there as an active duty Russian military man or as a mercenary of the Zarya Battalion or another illegal armed unit.

While Russia occupies about 20% of the territory of Georgia and more than 270,000 of its citizens were forced to leave their homes, while Georgian patriots perish for the freedom and integrity of Ukraine, it is difficult to consider a member of the martial arts club named after Putin Zaza Khassia to be Georgian, despite his Georgian surname. More than blasphemous is his comment to the image, which reflects human losses in the Second World War: «Pride takes for such a large figure, for such a small nation.” It is about 300 thousand Georgians who died in that war.

Zaza Khassia is not the only Georgian defender of the Russian ‘fatherland’. We remind you that earlier InformNapalm wrote about other Georgians defending the ‘Russian world’ in the Ukrainian Donbas:

This publication was prepared on the basis of the own OSINT investigation by Irakly Komakhidze and Victory Krm.

No Responses to “Identified: Zaza Khasia, member of the Putin Martial Arts Club, who was previously spotted in Donbas”