Rescue Worker Abdullah Al Hafi: When You Dig Out a Living Person from Underneath the Rubble, an Energy Fills You Which Can Last for the Next Thousand Years 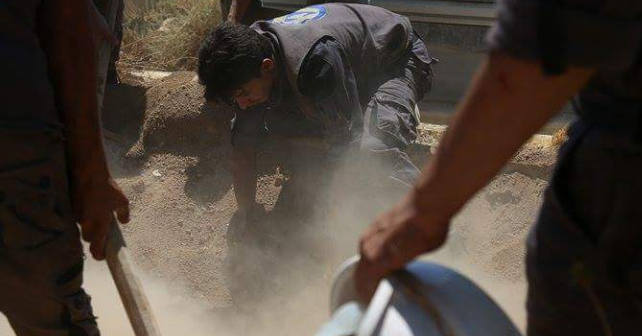 Lots of public initiatives emerged in the ranks of the Syrian opposition forces fighting the criminal Assad regime. There are activists performing complex and critically important work. The system of social management is developing, growing stronger and deeper. Thus, civic committees formed at the beginning of the Revolution gave birth to the movement of ‘White Helmets’. They are rescue workers performing the most difficult and dangerous work. They are the first to come to the scene of any emergency, they retrieve the wounded from underneath the rubble, provide first aid and ambulance transportation. In addition, they are are holding information and awareness campaigns helping people to survive under the Russian air strikes and shelling from Assad troops. A society with such initiatives and such level of self organization holds a lot of promise.

The Syrians had entered into the war against tyranny before the Ukrainians did. Bashar al-Assad, with the support of the Kremlin used much brutal methods against them. The civil society in Syria did not only survive this onslaught, but also generated a number of initiatives worth studying and learning from.

Here, we introduce to you one of the activists of the Syrian Revolution, who dedicated himself to saving lives. In this interview, we spoke about the Russian air strikes, about civilian casualties and about how people manage to maintain a sense of dignity and go on living. 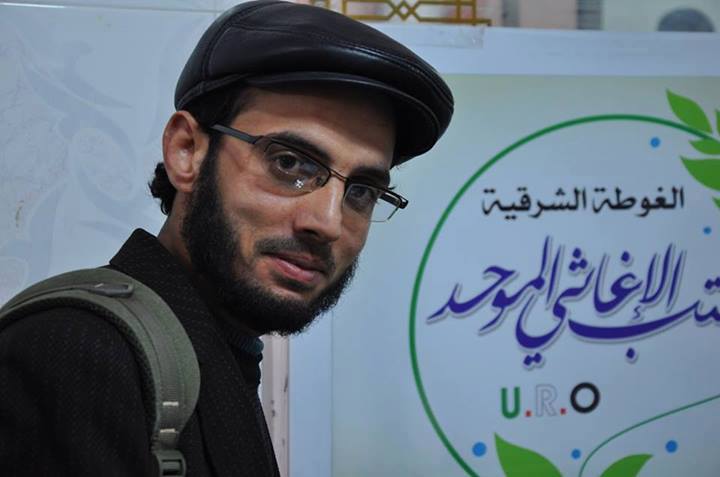 Tell us about yourself – how old you are, your education, what did you do before, where do you live, when you started to work as a rescue worker?

My name is Abdullah al-Hafi, I am 32 years old. I hold a degree in Economics from a university in Damascus. I worked as a financial manager in a food company in the town of Al-Maliha. I became a rescue worker from the moment the first bomb fell on our town. It began in mid-2012, we started to function as rescue workers attached to the first-aid stations. There, the idea of civil defense was born. 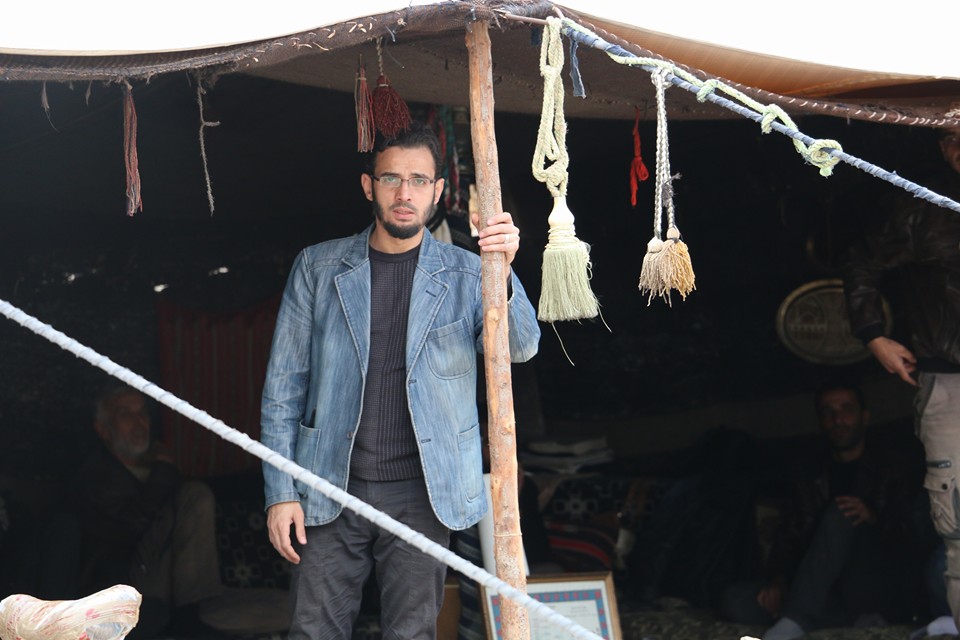 What are the ‘White Helmets’? How is this service organized in your area? How many people are engaged, what is the structure of the organization?

We began to form rescue crews around makeshift civil hospitals. Then we developed simple stations for first medical aid with the teams which pulled the victims from the rubble of bombed buildings and also fire brigades in different districts. Then we tied it all into one system for the Eastern Guta and the Capital area. Thus, we organized a single management system for the ‘White Helmets’ in the territories liberated from the regime. 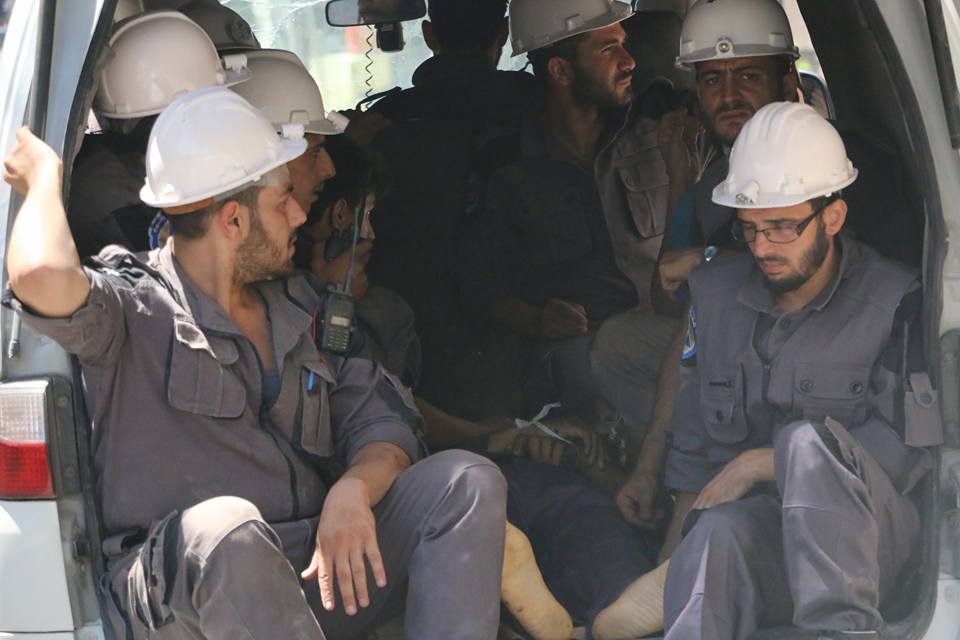 Our structures consist of: doctors; rescue teams that take people out of the areas affected by destruction i.e. teams that pull people from the rubble; an emergency management group; firefighters; security patrols (to protect private and public property from looters); teams to clear out roads (to free the way for ambulances etc.).

In our area, we now have firefighter, ambulance and rescue teams. They are divided into groups.

In our center, there are 30 people, organized into three teams of 10 people each, and each team is on duty for 24 hours. There is a head of the center and 3 group leaders (for medics, firefighters and rescue workers). 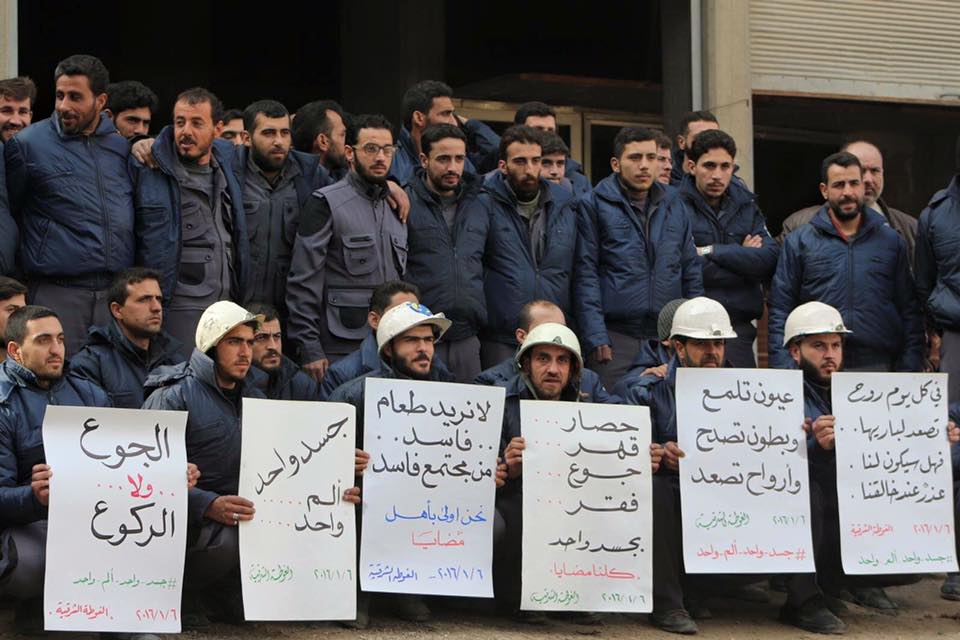 Who is eligible for ‘White Helmets’? Do you give training? How is it organized?

Anybody who wishes can apply to the personnel department, the application is followed up by an interview and evaluation of the candidate’s physical fitness. Then, those who have passed are sent to a training center. There, they are given a training course. We admit candidates into a team on the basis of their performance in the training course and upon positive feedback on the person from the people in the neighborhood the candidate comes from. 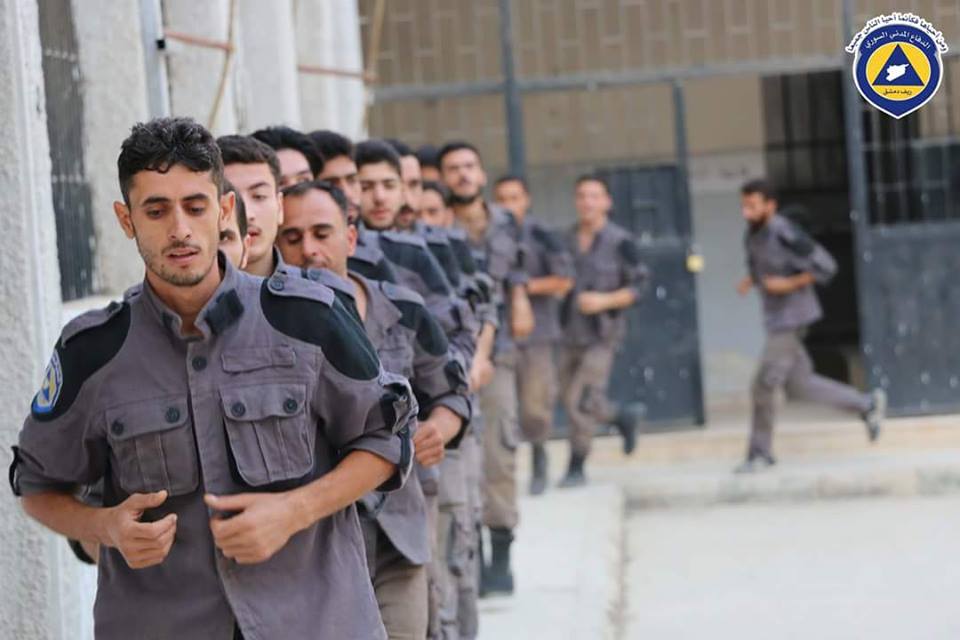 Tell us about the tools you use at work, what kind of vehicles you have, your uniform, any special equipment?

We used to have very primitive equipment, but today we already have ambulances, fire trucks, excavators. We fit some vehicles with additional tools and equipment which is useful in our work. We have uniforms, which in a way makes us more organized. 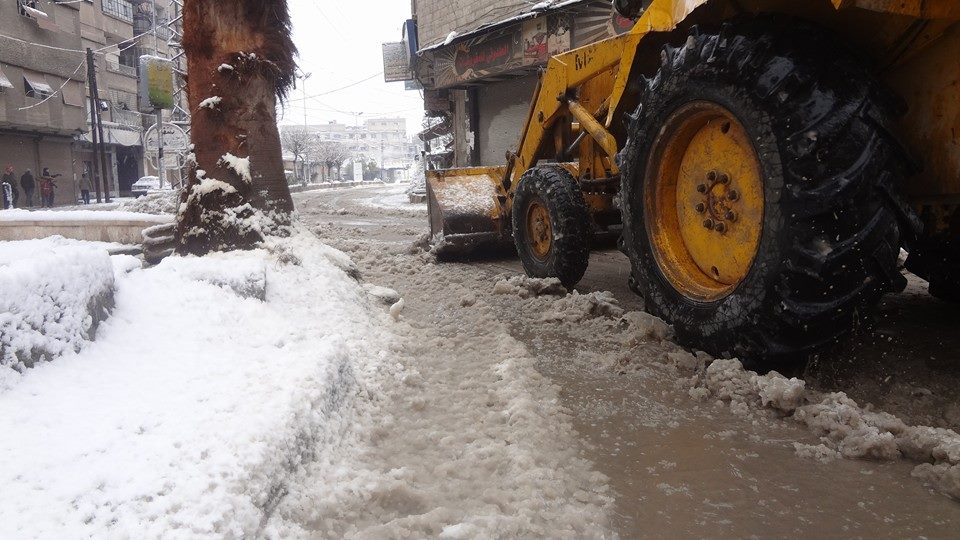 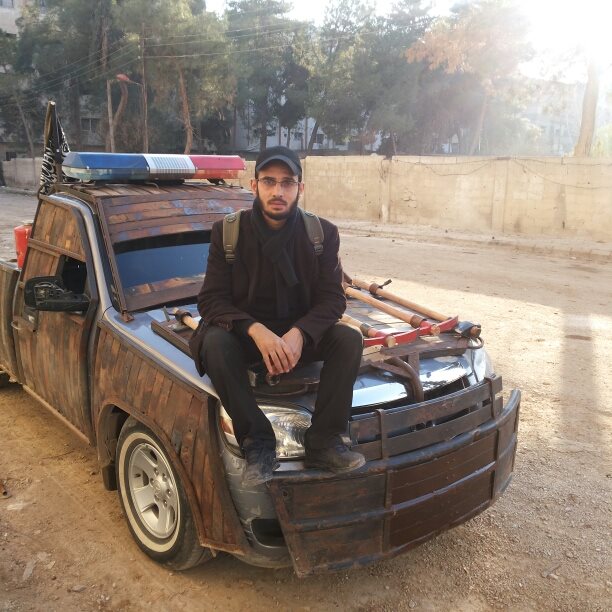 What is the mode of your work?

Experience has taught us effective organization. We already have extensive experience for a quick orientation on the scene. Dense shelling or bombardments and the ensuing chaos are certainly a challenge in our work. 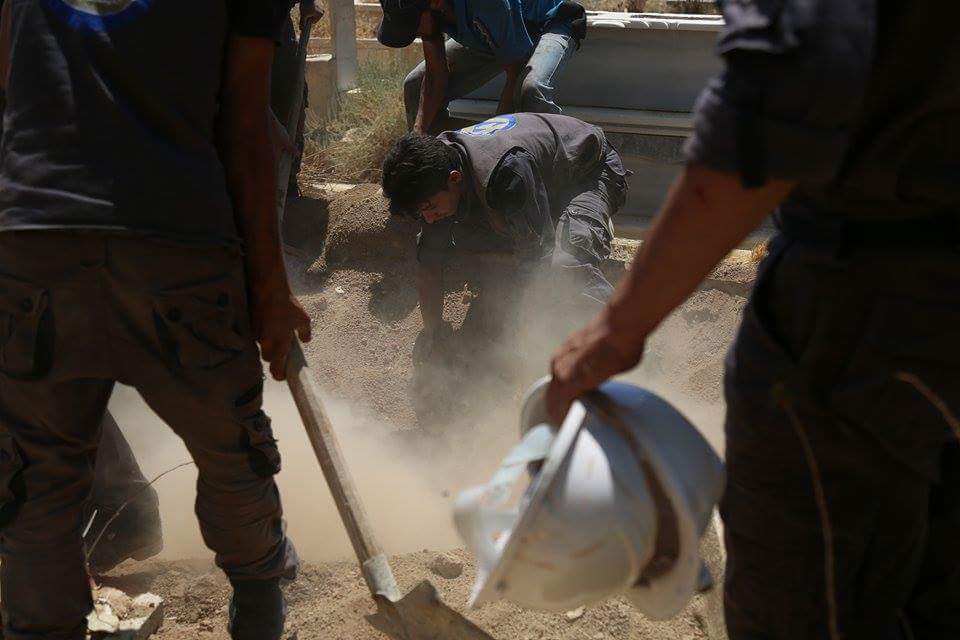 Tell us about your typical day when there are no large emergencies.

When it is quiet, teams of repairmen maintain our vehicles and equipment. Whereas, we hold lectures and trainings for colleagues. 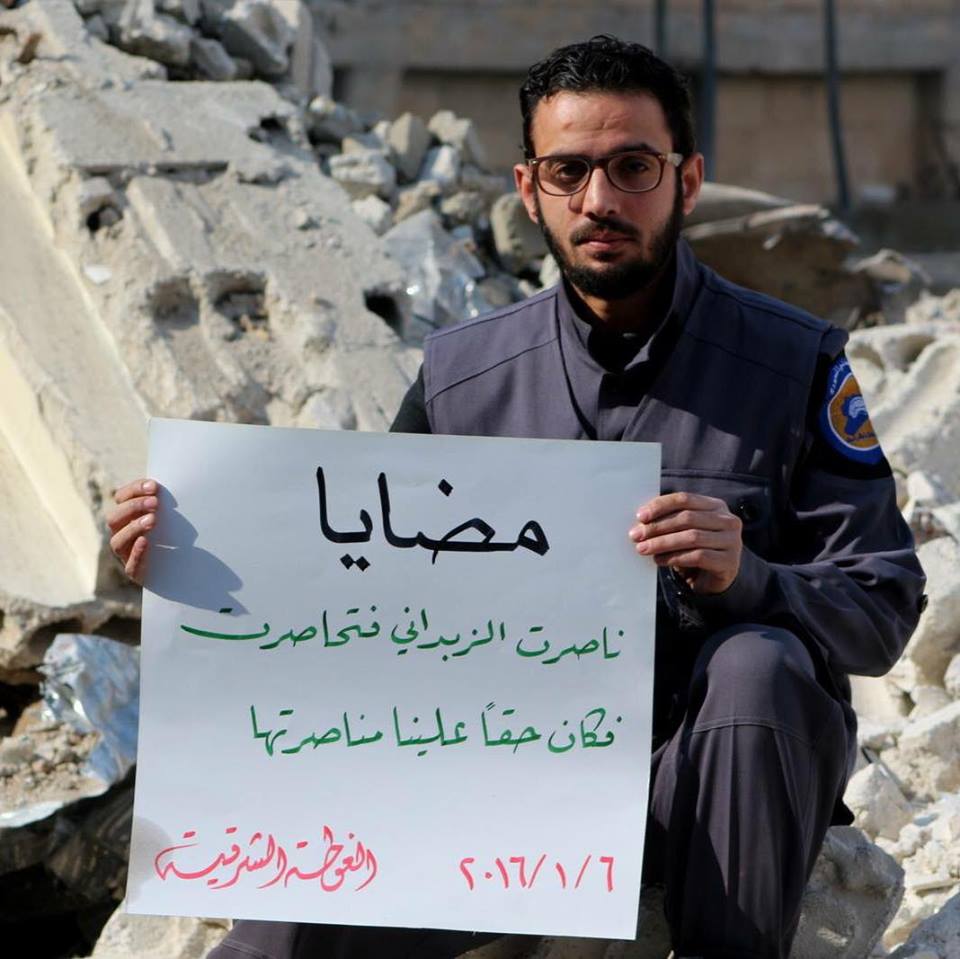 On the picture: Abdullah Al Hafi holding a poster calling to save Madaya. Rescue workers of the Eastern Guta held a rally in support of Madaya and raised money to help the starving people.

What is remembered the most?

In our work, lots of unusual things happen. It happened once that after a few hours of work on a pile of debris and rubble we found a whole family underneath – children and a woman – all alive and totally unscathed. It also happened that the Russians were striking areas directly, but there were no victims. God showed his grace. 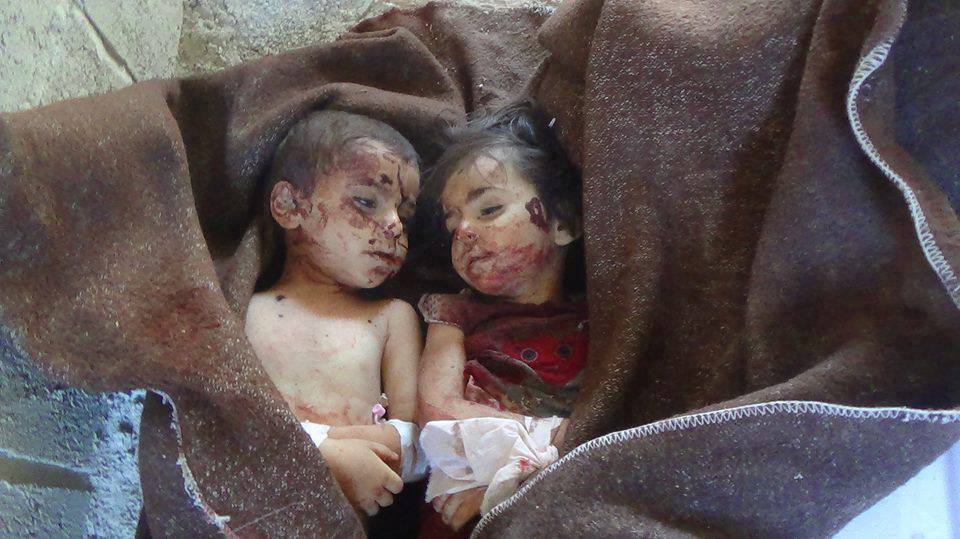 Did you take part in the rescue of people affected by the Russian air strikes? When and where was it? Could you give some details – who were the victims, what kind of destruction did it cause? What was your job?

Since early November, the Russians began to bomb Guta in earnest. In Duma, Hammouria, Kafr Batna hundreds were killed by the Russian air strikes. The Russian cluster bombs reduced whole neighborhoods to rubble. I will never forget the mass killing in Kafr Batna and Jisrin. And the massacre in Hammouria. And strikes on Duma. In my ears there still are these sounds of death, I remember the smell of blood and torn human bodies. 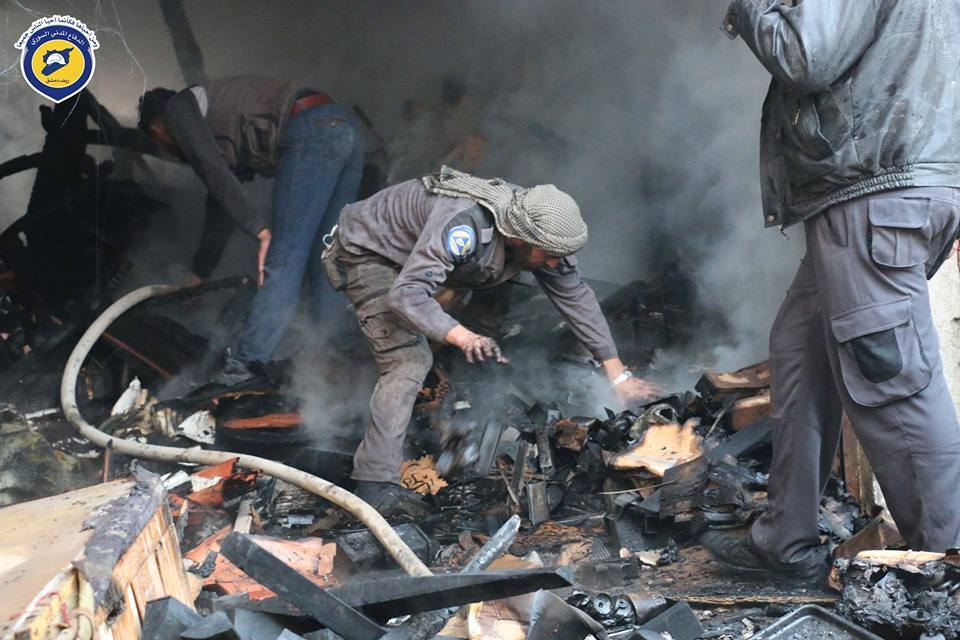 How do you document such cases? Do you have photos and videos, lists of victims of statements of destruction? What kind of information on the crimes committed by Russia could you give us for publication?

We have a documenting office. Civil Defense staff photographs and documents everything. I will send you a separate file with these materials. It is also available on the page of the Civil Defense. 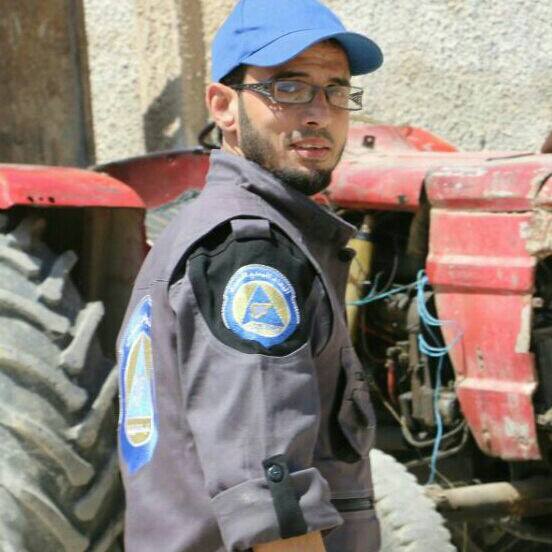 Tell us about the humanitarian crisis in the region caused by the war. What is it, people suffer the most from? How do you help them?

Immediate or gradual death – that is what people suffer from.
The dead go to their resting place, but the survivors have to look for new homes, a new life. Before the next bomb comes, that is. We, as the Civil Defense, rescue them and transport them to a safe place.
Assistance Departments and local authorities find housing for them. 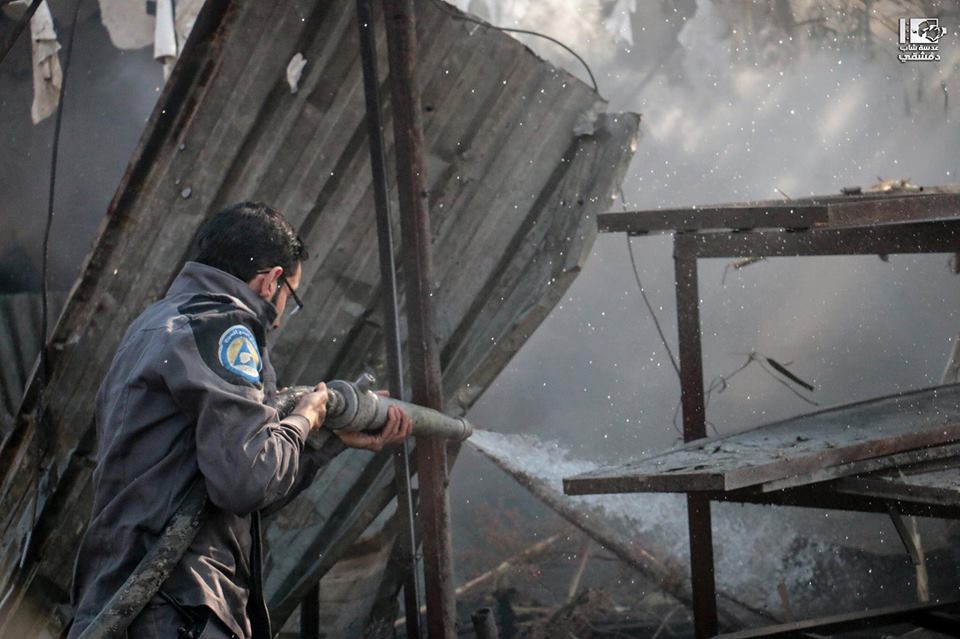 We know that there are lots of minefields and unexploded shells in Syria now. How is the situation in your area? Does disarming the ammunition make part of tasks?

In our area, there are no mines. But after the Russian invasion cluster bombs have become almost daily routine.
Because of a lack of professional mine clearing teams we, as Civil Defense, are trying to lift the submunitions with big excavator shovels and bury them away somewhere. 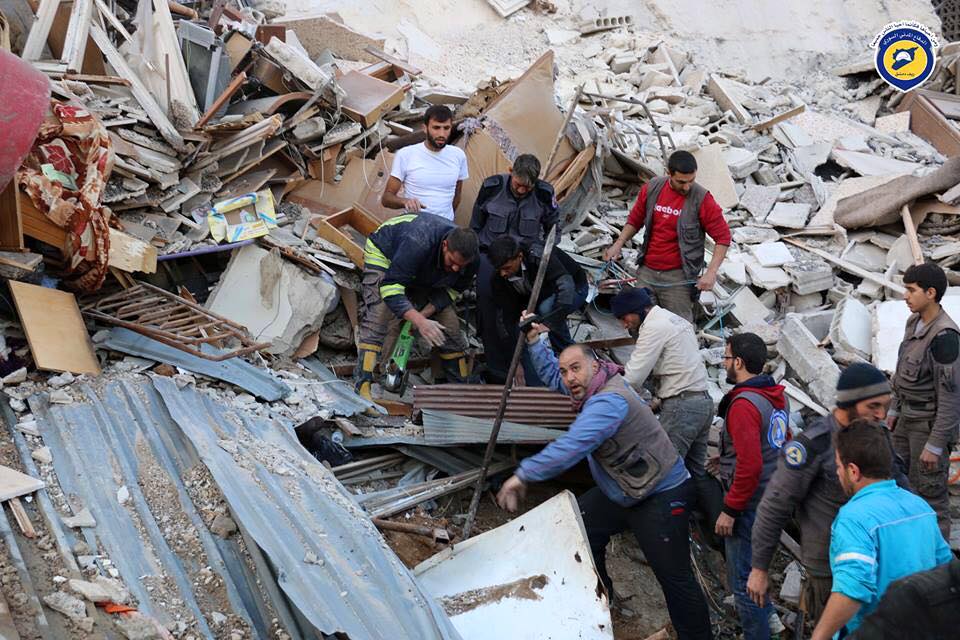 How do you interact with the health authorities? What kind of work do you do together, what is the difference between you?

Medical service in Guta also has first aid teams. But they only transport victims.
And we also search for the wounded and provide medical aid on the bombing scene. We also transport the victims to the first-aid stations. We also organize and coordinate all the work on the spot – deliver all the needed assistance and provide all the necessities like water, electricity, cleared roads, etc.
And of course, we work together with the medical authorities. 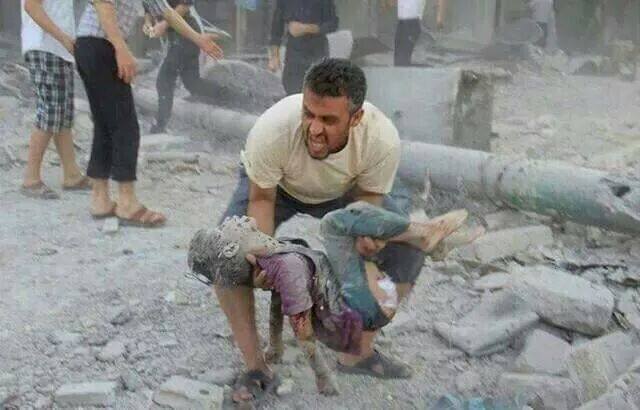 Tell us about your team. Who are you, how do you share responsibilities, how do you interact with each other? Do you have any friendly relationships beyond the business matters?

Our team consists of the young revolution activists. Most people know each other from the revolutionary activity, or volunteer projects.
Many of us do additional work in other areas. For example, I am also active in the field of psychological support for children.
But for me, the Civil Defense is a big family where we share in the difficulties and joys. 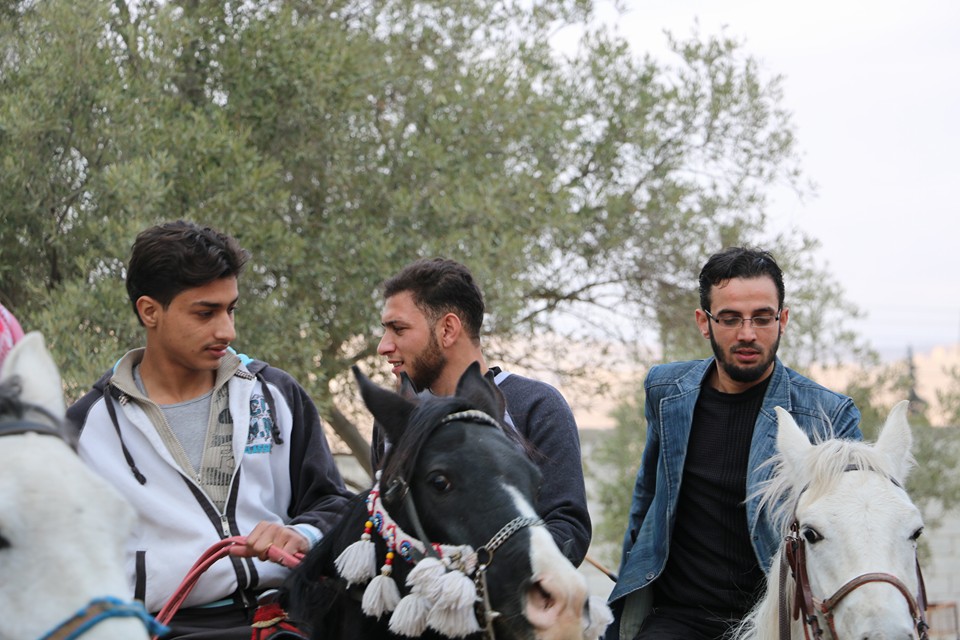 It must be hard seeing so much death and destruction, how do you cope? How do you deal with fear? Who is providing psychological support – the family, friends, a professional psychologist?

Hope is our psychologist. Hope and love are our psychological instruments. When you dig out a living person from underneath the rubble, an energy fills you which can last for the next thousand years.
And in parallel, we are trying to hold courses for the psychological support and specific work with children – these courses are for all the employees of the Civil Defense. And there is a great need for this. 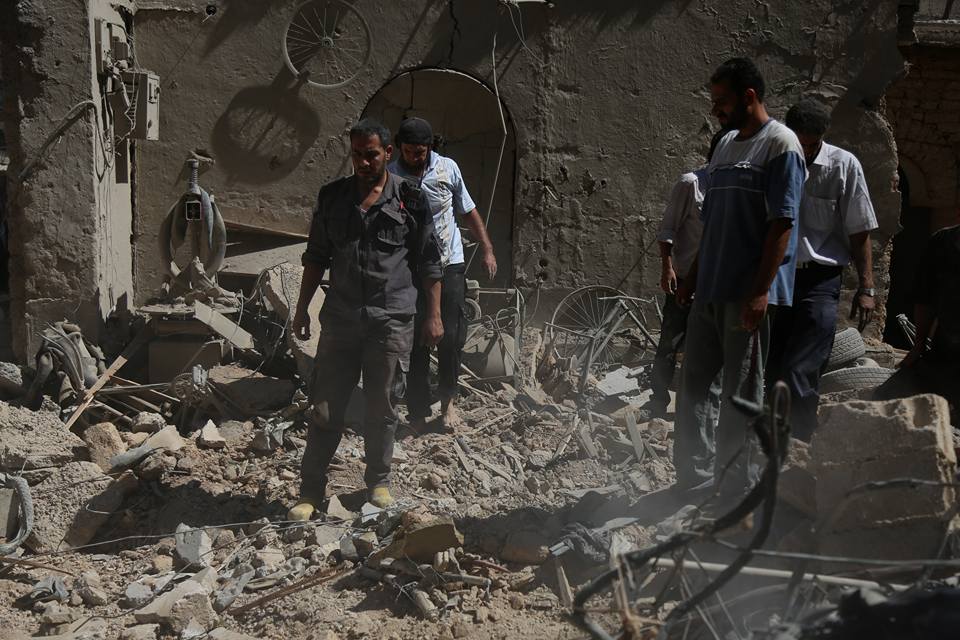 Tell us about the preventive work you are doing. How often, with some categories of the population do you work? Do you see the results?

The Training Center team conducts civil defense trainings in schools for teachers and women. Unfortunately we are very busy at work, and it leaves little time for a broader awareness work. 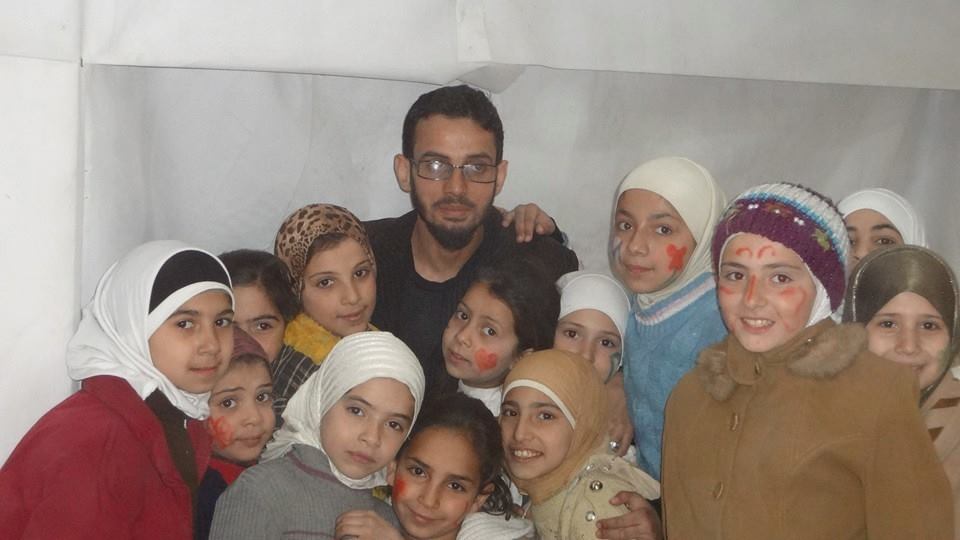 Did you have to rescue children? Could you tell us about such cases?

Children suffer the most from the strikes of Assad and the Russians. When children die – it is our biggest pain. And when they survive – it gives us our greatest hope. When you pull out a child from the rubble, you feel that life will go on, in spite of Assad and Putin. 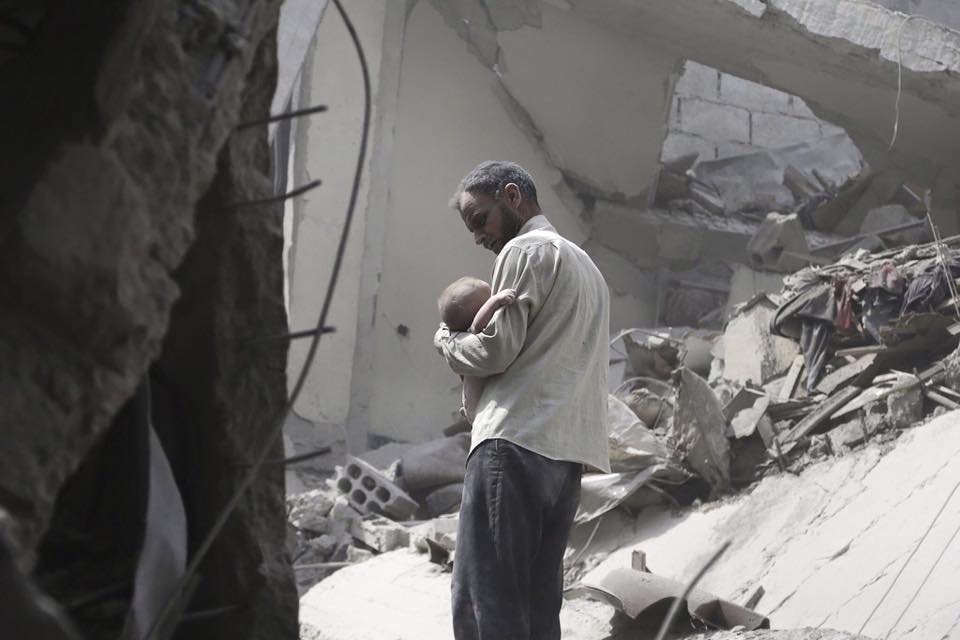 Rescue work is associated with increased risk. Do you know cases when rescue workers got killed while helping others?

The Russians have a grisly tradition – they hit the same place twice. They wait until people gather at the scene after the first strike.
In 2015, only in the Eastern Guta, 30 Civil Defence colleagues were killed and 80 were wounded in air strikes (by Assad and the Russians). 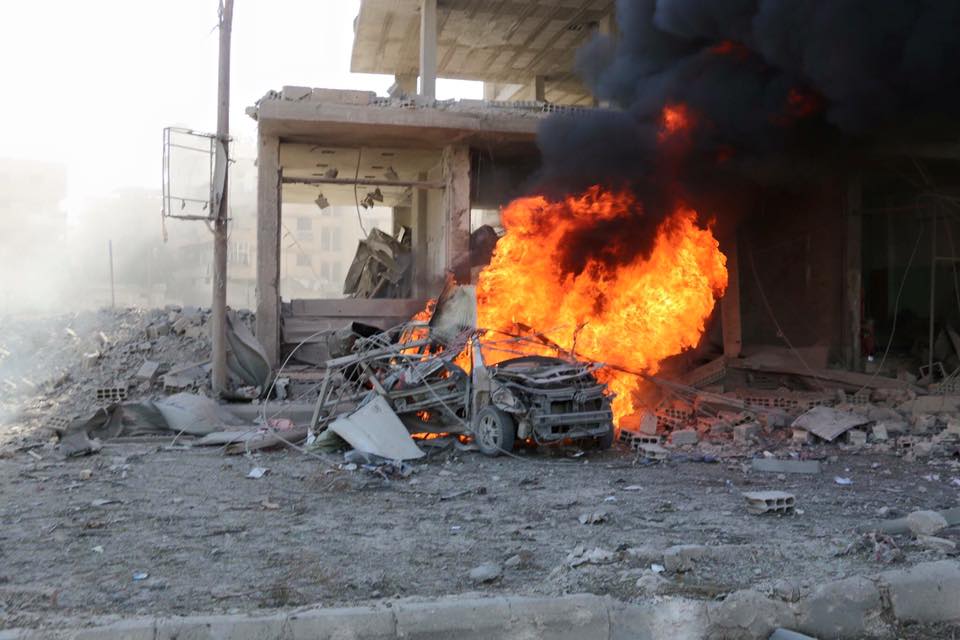 Tell me, what do you see as the main result of your work? What makes you proud both in terms of you personal and you team’s achievement?

Saving lives and holding the honor high, isn’t this the behest of the God the Almighty to the people?
I am proud to be a Syrian, and to support the spirit of our country – the spirit of freedom, dignity and humanity. It is the Revolution. It is the Civil Defense. It is the ‘White Helmets’. 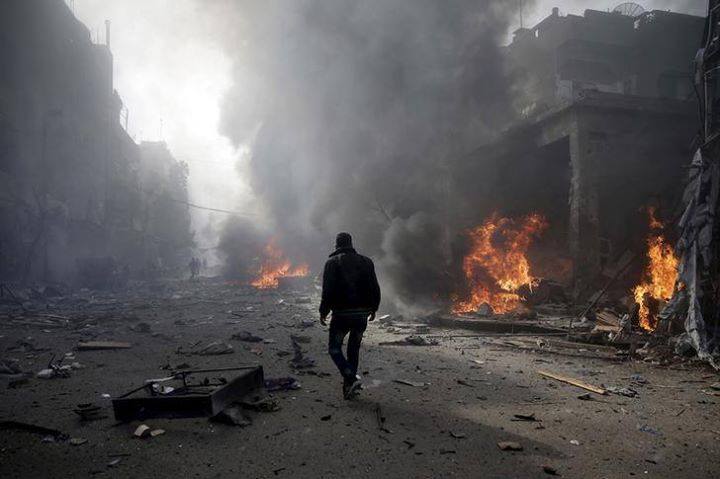 2 Responses to “Rescue Worker Abdullah Al Hafi: When You Dig Out a Living Person from Underneath the Rubble, an Energy Fills You Which Can Last for the Next Thousand Years”