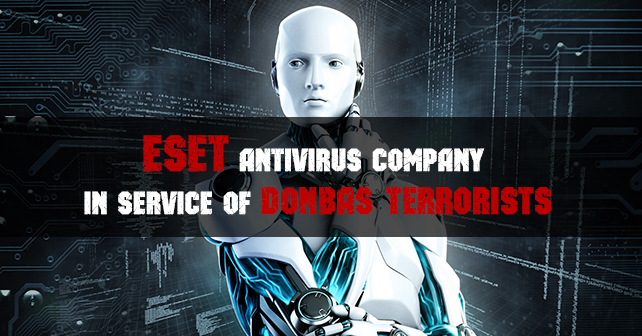 Russia pulls strings around the world. Here is a recent example – the Slovak company ESET has helped Donbas terrorists by conducting an audit and publishing the report on cyber espionage by the Ukrainian intelligence services over the authorities of the so-called ‘DPR’ and ‘LPR’. Moreover, the audit was initiated not by the Russian distributor but the antivirus company’s central office in Bratislava. In particular, by a Russian expert, who has long settled down in the headquarters of ESET.

MFA of Ukraine, the media and other officials, unfortunately, did not respond to the given incident. It is strange that the anti-virus company got away with the assistance to the terrorists and protection of the Russian militants from the Ukrainian cyber attacks.

Why did ESET help terrorists

Just a few days before the ESET’s controversial report, on May 9, the Ukrainian hackers from the cyber alliance of FalconsFlame and Trinity hacked the official websites of ‘DPR’ terrorist enclave and several outreach resources of the pro-Russian militants. Obviously, such a cheeky action seriously troubled the Russian leadership and security services. They were quick to give their answer.

And now, a few days later, a press release with the investigation of cyber espionage over ‘militia’ was posted on a well-known resource habrahabr.ru in the ESET’s blog which is positioned as the official blog of the Russian office of the company. By the way, here is a quote from the press release: “The main objectives of groundbait were militia of the Eastern Ukraine”. Soon, fearing resonance, the article was ‘cleaned up’ as reported by Artem Baranov, a leading virus analyst at ESET in Russia:

It is obvious that ESET antivirus company conducted its research on the basis of the data provided by representatives of terrorist of ‘DPR’ and ‘LPR’. Otherwise, how could ESET have got the specific emails’ topics and attached documents. Below is a fragment from the research, translated by ESET in the Ukrainian:

ESET positions itself as apolitical but it is plain to see that they collaborate with the Russian terrorists in Donbas.

Special attention should be paid to the author of research – Anton Cherepanov, a specialist from the Slovak office. We were not able to find his profile in social networks, just his Twitter account. And his LinkedIn profile says that he graduated from the South Ural State University (Chelyabinsk, Russia) in 2009.

Anton Cherepanov not only carried out the research, but also made a presentation on this topic at Positive Hack Days forum, which took place in Moscow on May 17-18. In other words, the specialist actively promotes the story how the ruthless Ukrainian special services keep tabs on the ‘poor militia’ (read – ‘terrorists’). 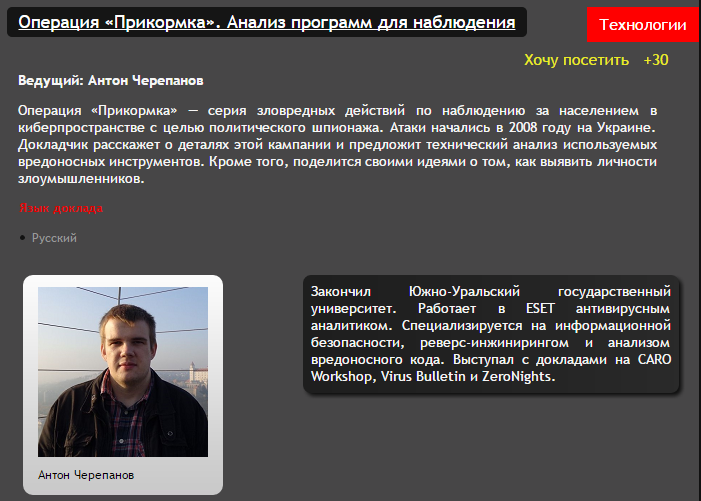 Any journalist and blogger who feel like it can address Anton Cherepanov via his email [email protected]. For instance, it would be very interesting to know with whom of the militants or Russian curators contacted Anton Cherepanov, did he receive any reward for his research, what is the interest of the ESET company in this case, etc.

Will ESET be banned in Ukraine?

An anti-virus company that has access to the objects of national importance becomes very dangerous if ‘third parties’ meddle in its processes. For example, Evgeny Kaspersky graduated from the KGB Higher School in 1987, and starting from 2012, according to Bloomberg data, cooperation between ‘Kaspersky labs’ and the Russian special services have increased dramatically. Not surprisingly, Petro Poroshenko issued a decree in 2015 banning the use of the Russian ‘Kaspersky lab’ and ‘Doctor Web’ products in public institutions.

It means that the grounds for the imposition of sanctions against the Russian antivirus companies are also suitable for the ESET company.

Is there a potential threat to national security if ESET’s Nod32 antivirus is installed in 75% of the state institutions of Ukraine, which means the company has access to the data of national importance?

3 Responses to “ESET Antivirus Company in Service of Donbas Terrorists”