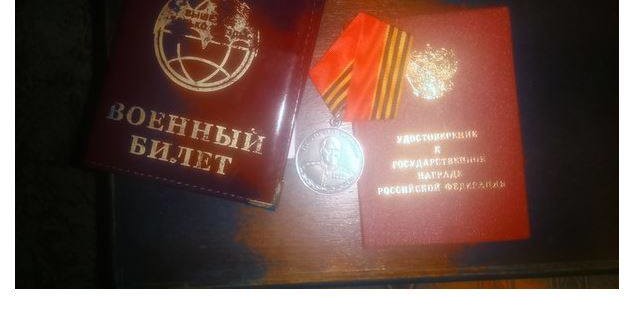 During our collection of information on the Russian military participating in the undeclared war against Ukraine, new soldiers who received awards were identified. They soldiers serve in the battalion tactic group of 7th Russian Military Base (military unit 09332, Gudauta in Abkhazia, Georgia) and they returned from temporary duties in Rostov and Ukraine.

-Gaidukov Vyacheslav Aleksandrovich (link: https://vk.com/id201602774), a contract serviceman holding a position of a troop commander of the cavalry unit of the 7th Base. He has been awarded a “Zhukov medal”; the commendation list no 0541 on the 22 January 2015 sighed by Supreme Commander-in-Chief, Russian President Vladimir Putin. The “Zhukov medal” is a Russian state decoration used to award servicemen of the Ministry of Defense and other departments for their valor and bravery manifested in combat activity of the defense of homeland and state interests. 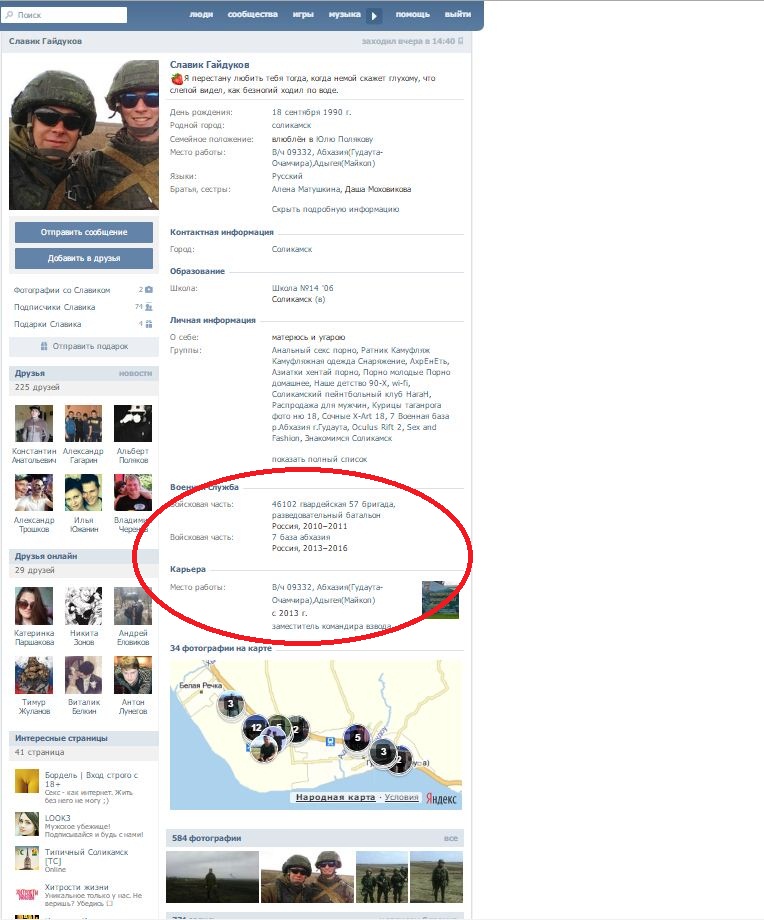 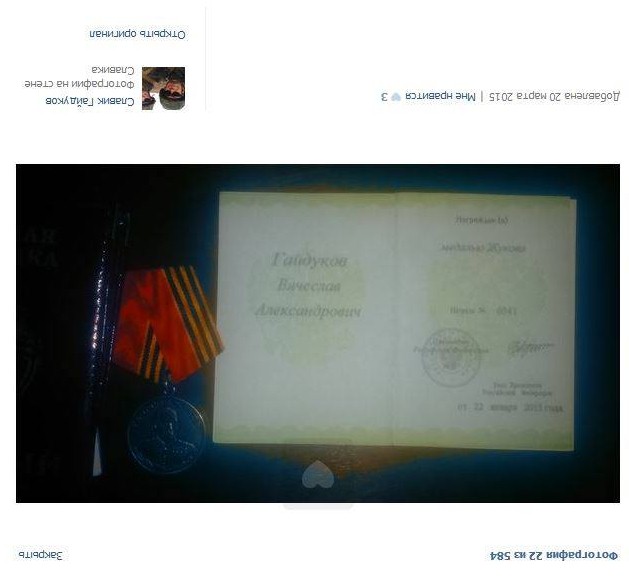 -Demyanovskii Aleksandr (VK profile is now deleted), a contract serviceman of a tank unit of the 7th Base. According to his own comment, he was awarded a medal “for battle merit” (we could not identify his medal exactly). 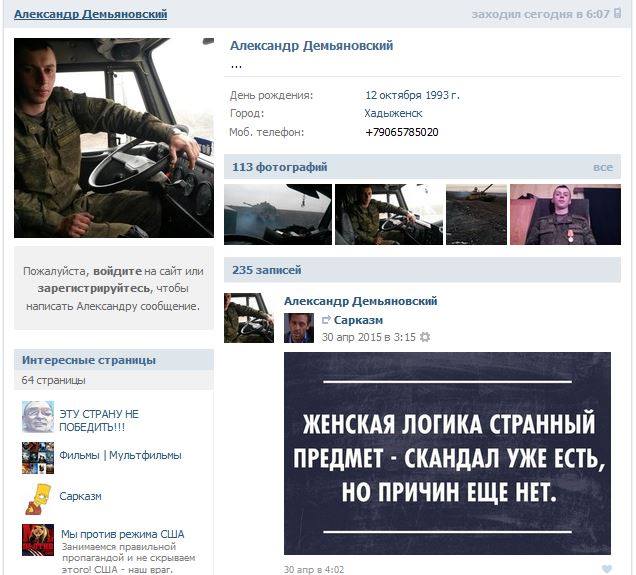 The fact that Gaidukov and Demyanovskii were awarded medals for the Russian escapade in Ukraine is supported by several photographs and comments in social networks:

Apparently, this is not the first Ukrainian duty of Gaidukov. On his timeline there is a photograph from October 2014, where he poses together with his fellow soldiers dressed in a uniform used by “Novorossiya” militants. On the other photograph he poses with a  sign of a railways platform in Persianovka in the background. Persianovka is a little town in Oktyabrskii Rayon (district) of Rostov Oblast, close to where the Russian military has base camps for the deployment of invasion forces. Among other photos uploaded by Gaidukov in April-May 2015, there are slides showing the result of an accident in which an aircraft “IL-76” was destroyed in a fire and series of explosions on 28 April. 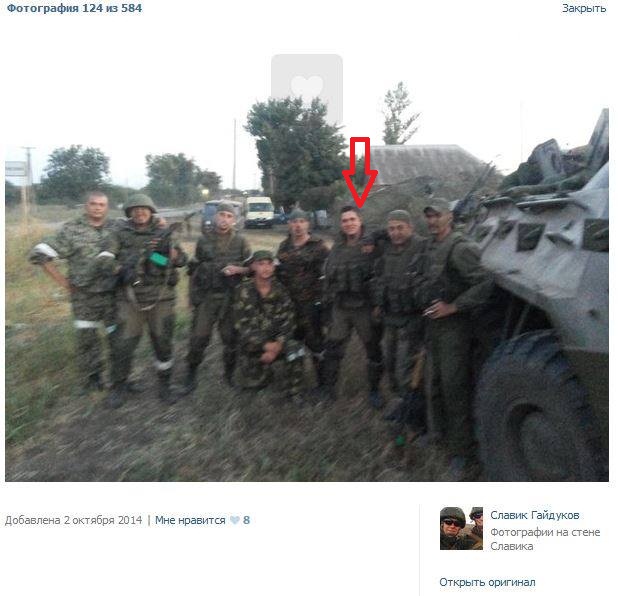 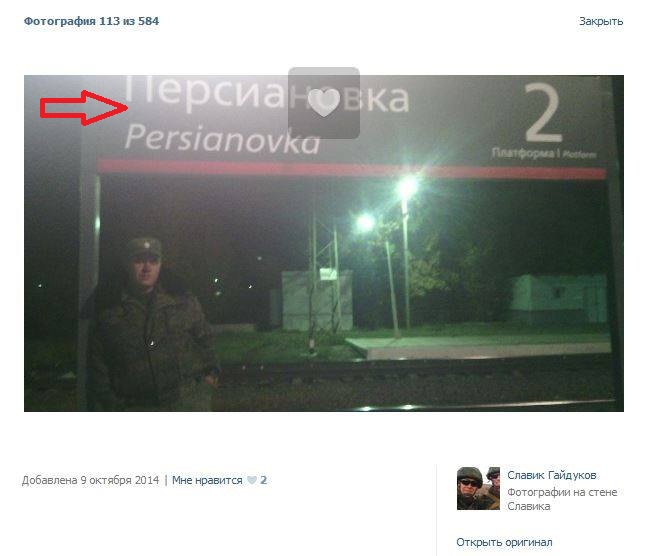 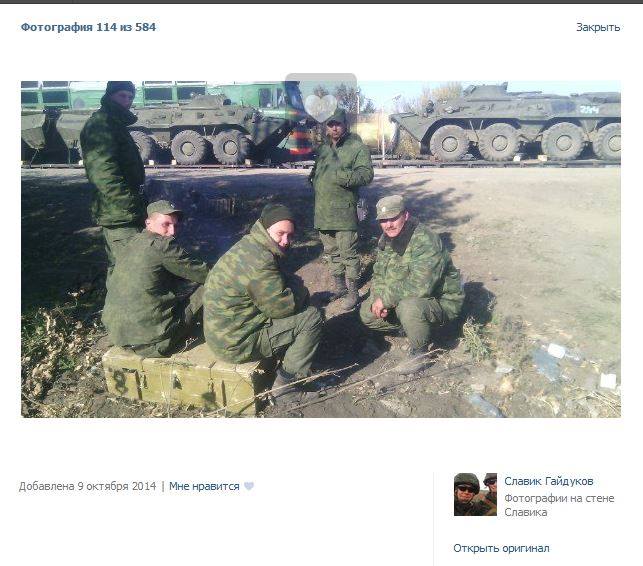 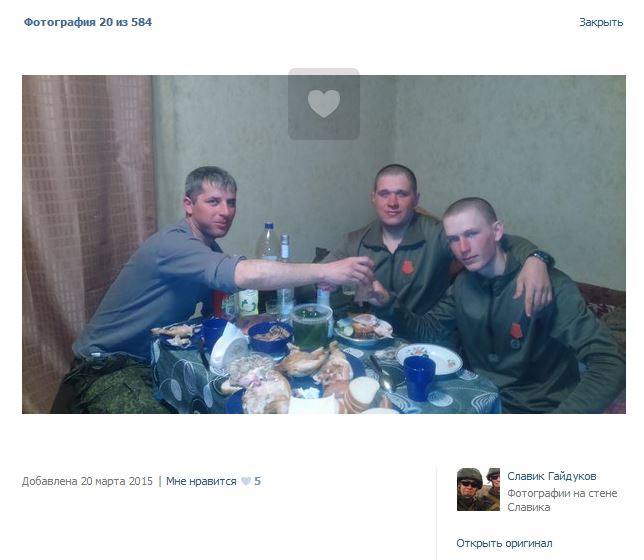 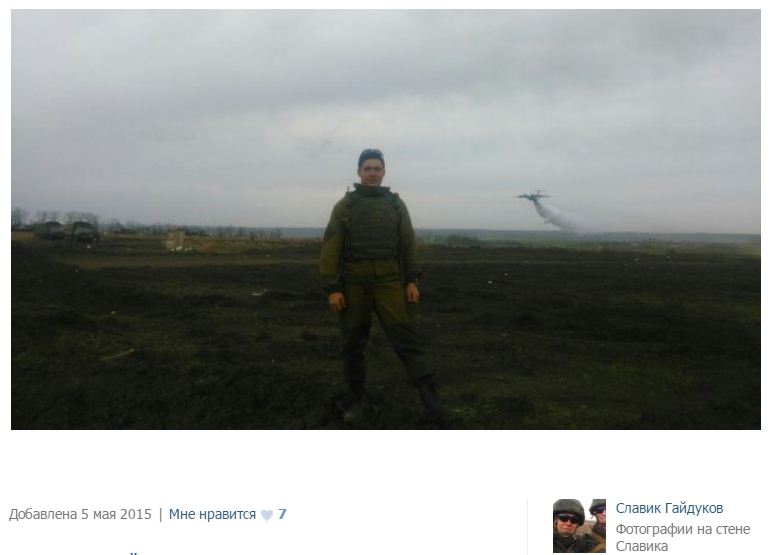 The photo album of Demyanovskii is more modest and not so informative, but he is frank in comments and one can see that he is preparing to his second Ukrainian duty. One of his slides untitled “never forget” is dedicated to the memory of died servicemen from 2nd Motor Rifle Battalion of the 7th Military Base. He boasts under the slide of 31 January 2015 that he received a medal “for battle merit” and the brigade commander awarded them to 2nd Motor Rifle Battalion/ Battalion Tactic Group (therefore, the Battalion Tactic Group of the 7th Base was manned mainly by servicemen from 2nd Battalion, together with appropriate supplementation). One more his comment to the same photo is dated by 1 February and it tells that he is ready to a new trip to Kadamovka (i.e. Kadamovskii in Rostov Oblast). 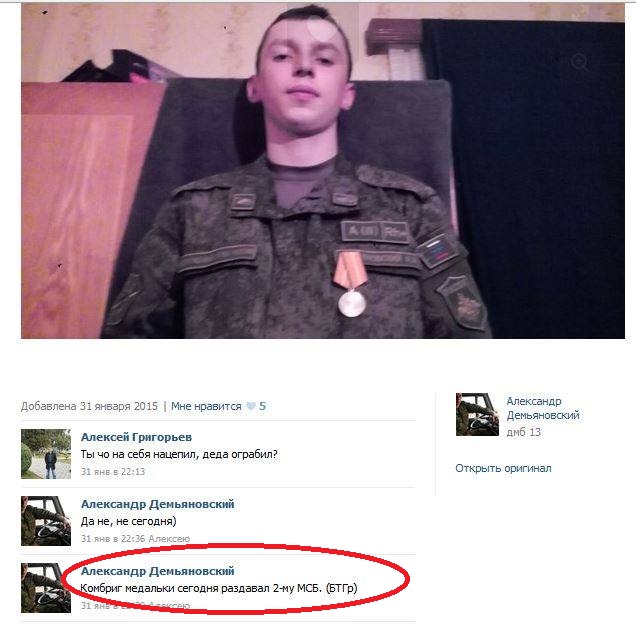 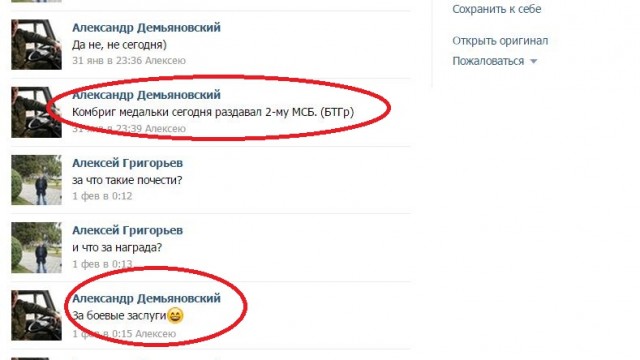 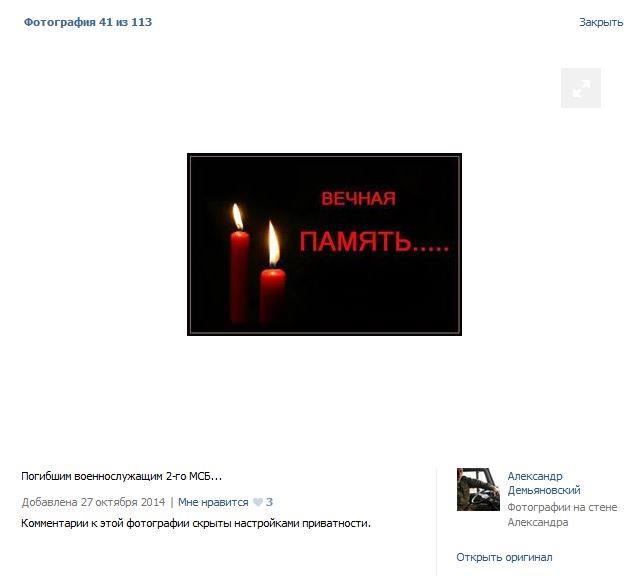 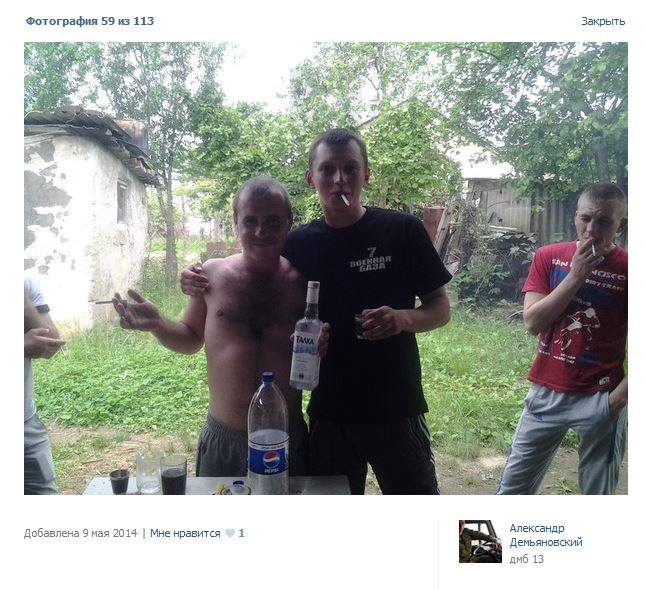 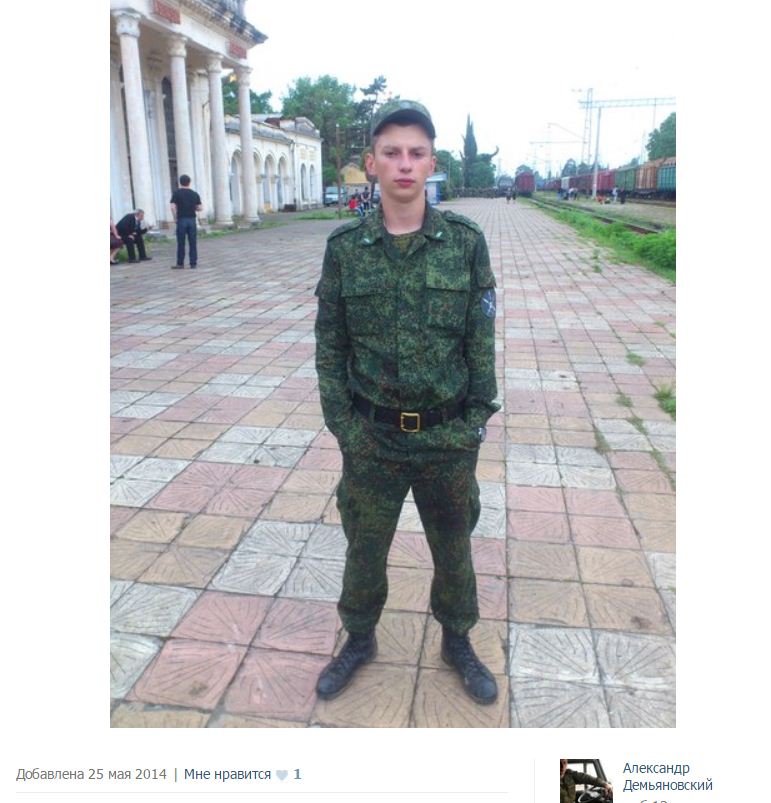 News media and InformNapalm has previously highlighted evidence of ”Rostov-Ukrainian duties” being undertaken by servicemen of the 7th Russian Military Base (in occupied Abkhazia, Georgia) and about losses from this unit. For example, in the beginning of October 2014, the self-propelled artillery from this base was spotted in the Matveevo-Kurganskii Rayon of the Rostov Oblast (see “Conbat crews of the SP gun ‘Akatsia’ from 7th military base fighting guerilla war in forests along the Ukrainian border”). The missile artillery was identified in December in Kuibyshevskii Rayon of the Rostov Oblast (see “Missile artillery of the 7th Russian occupation base in Abkhazia on the border with Donbas”). In February-March 2015, InformNapalm described events at the 7th Base related to the “Rostov-Ukrainian duty” and the preparation of yet another battalion tactic group for an expedition (see “From tangerine paradise to Ukrainian hell: Russian contract servicemen sent to kill Ukrainians in a voluntary-compulsory manner” and “Conscription soldiers from the 7th Russian military base are recruited to the contract service for ‘Ukrainian duties’”). In March 2015 a fresh battalion tactic group from Abkhazia was spotted in Oktyabrskii Rayon of the Rostov Oblast (see “Troops of the Rostov group are undergoing intensive military training and combat shakedown in the prairies near the Ukrainian border”).

This is the first evidence brought to light where a Russian invader has been awarded a “Zhukov medal”. According to the information previously published, Russian soldiers sent to Ukraine were encouraged by other medals: state medals “For Courage” and “Suvorov medal”; and the departmental medal “For martial prowess”. See references:

(с) The material was prepared by Irakli Komaxidze (link: https://www.facebook.com/irakli.komaxidze)  and krmvictory exclusively for InformNapalm. Awarded soldiers from the 7th military base were found by askai707.

The reference to InformNapalm and the authors is required when using the material.

Original article by Irakli Komakhidze and krmvictorytranslated by Maria Holubeva