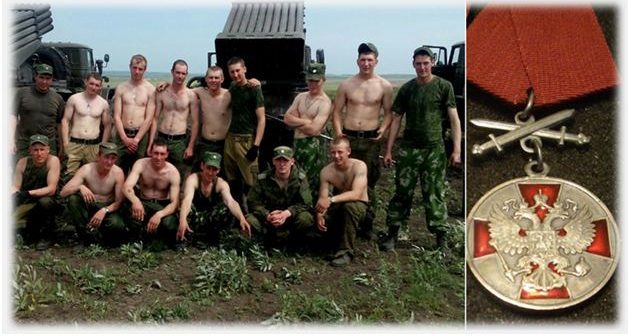 As a result of the new investigation, we disclose a name of a serviceman from the 7th Military Base who has not been previously included in the list of identified artillerymen, who served in the Battalion Tactical Group (BTG) of this Military Base. Even more, the new character helped us to identify other “Donbas veterans” from of this Military Base, who received military awards, including quite rare one – the second class Medal of the Order “For Merit to the Fatherland” with swords, which is awarded only for participation in military operations.

One of the main objectives of InformNapalm international intelligence community is discovering and recording facts that prove participation of the Russian Armed Forces in the undeclared war against Ukraine. Besides identification of equipment and weaponry, deployed from Russia to Donbas, we identify Russian war criminals and military units of the Russian Armed Forces they serve in. We work on identification of Russian servicemen recently deployed to Ukraine and blended into illegal armed groups of Novorossia, as well as “veterans” of the active combat phase of the war in eastern of Ukraine in summer – autumn 2014 and later. OSINT investigators’ efforts are focused on a group identification of entire military units, including composing and publication of the evidence base and personal data of Russian servicemen, who executed Kremlin’s illegal orders. For example, 27 (!) our investigations were about servicemen from the 7th Military Base of occupation forces (military unit 09332, Gudauta, occupied Abkhazia, Georgia), which is a part of the 49th Army from the Southern Military District of Russia. We disclosed names of more than 50 Russian artillerymen, scouts, and communications men, including 7 officers and 10 recipients of different military awards from this military unit.

After the investigation conducted in November of last year, we identified 21 artillery men from the combined rocket and gun artillery battalion from the battalion tactical group (BTG) of the 7th Military Base. These servicemen were involved in shellfire of the Ukrainian territory in 2014. However, many war criminals have not been identified yet, and we continue our investigations. The results are published on a regular basis; this is one of them. 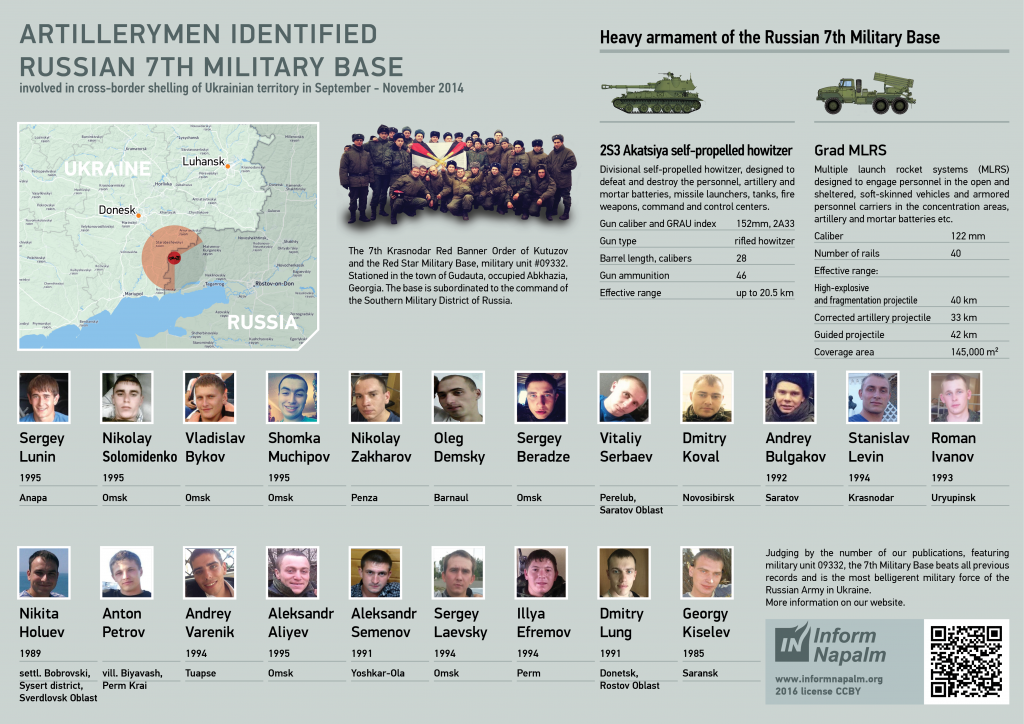 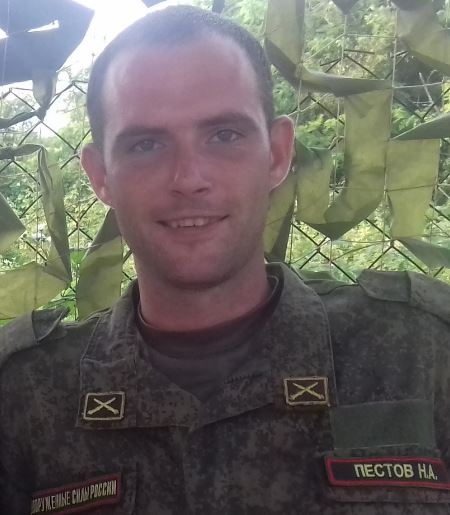 He was born on July 23, 1994, is native of the town of Serdobsk, Penza Oblast, Russia. Since the beginning of 2014, he has been a contract serviceman of the artillery unit of the 7th Military Base.

Based upon his photo album, he made a way, typical for military personnel of a BTG from the military unit 09332: in spring-summer of 2014 he was in Ashuluk training area and in summer-fall of 2014 in Rostov Oblast, from where the Ukrainian territory was shelled. 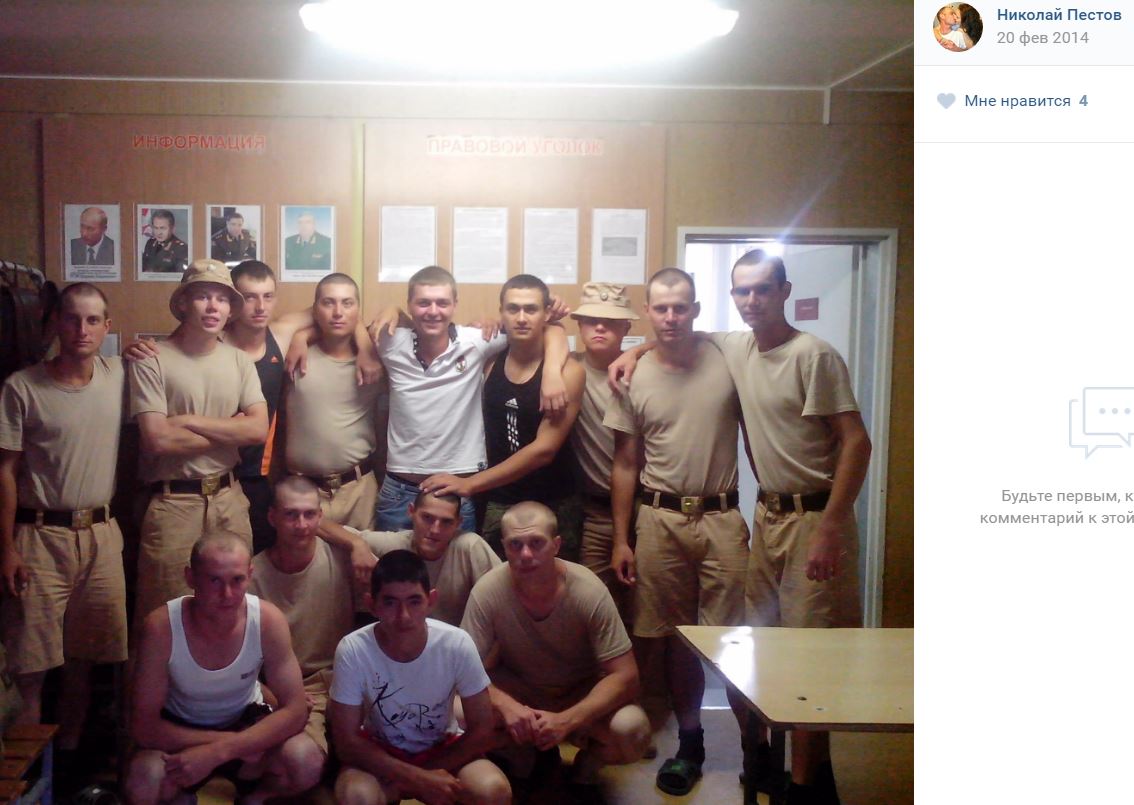 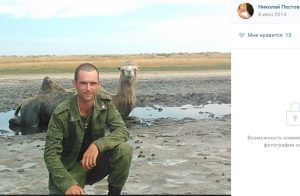 Nikolay Pestov’s album contains photos from the “Rostov-Ukraine mission of 2014” period, including: 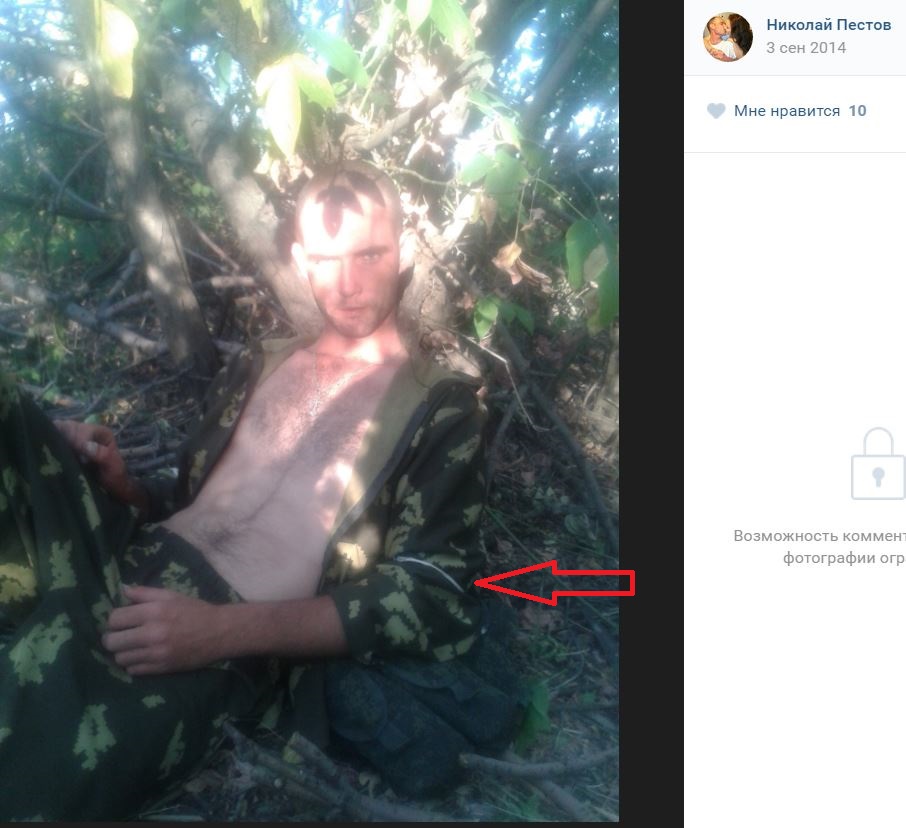 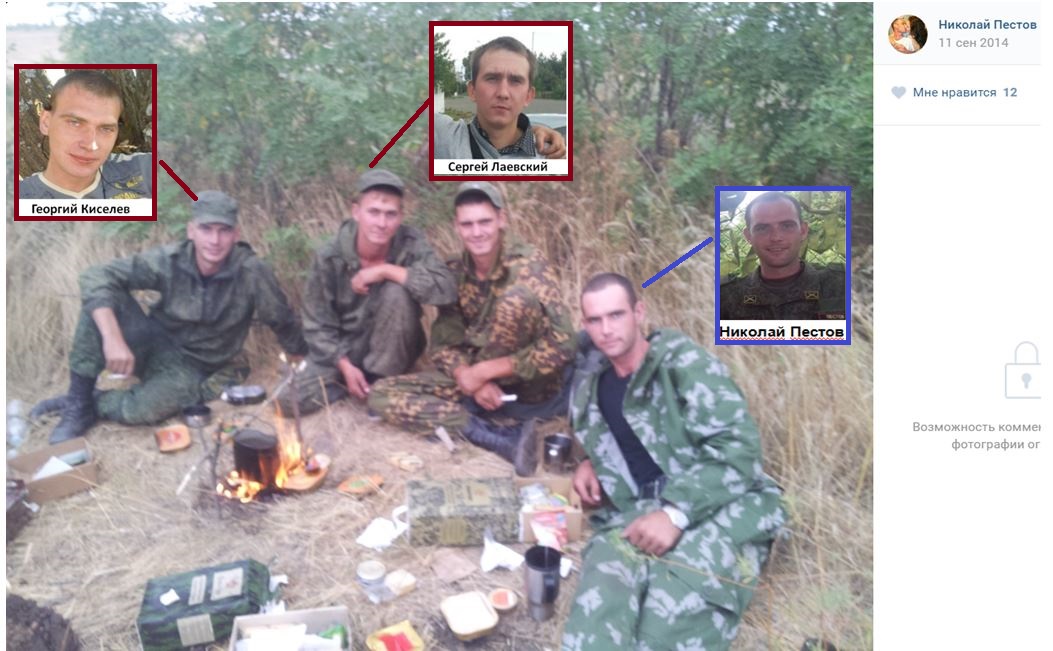 Studying Pestov’s contacts, we found his colleagues from the 7th Military Base who received military awards during a peace period which proves their participation in the undeclared war against Ukraine. 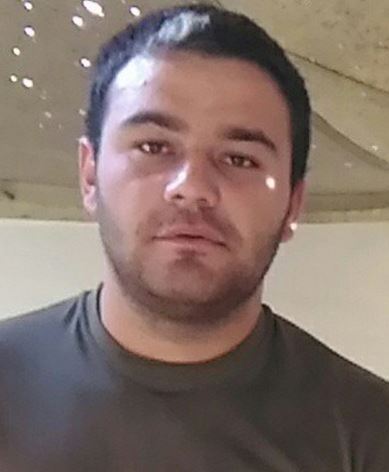 He is a contract serviceman of the 7th Military Base. Allegedly, earlier he served in the 34th Motorized Rifle Brigade (military unit 01485, Stanitsa Storozhevaya-2, Karachay-Cherkessia) of the 49th  Army from the Sothern Military District.

Here is his account on VK (archived profile, subscribers).

Though Aleksandr Motrichev has cleaned out his page and tried to hide his photo album, we have saved a link to his complete photo album and to its archive. 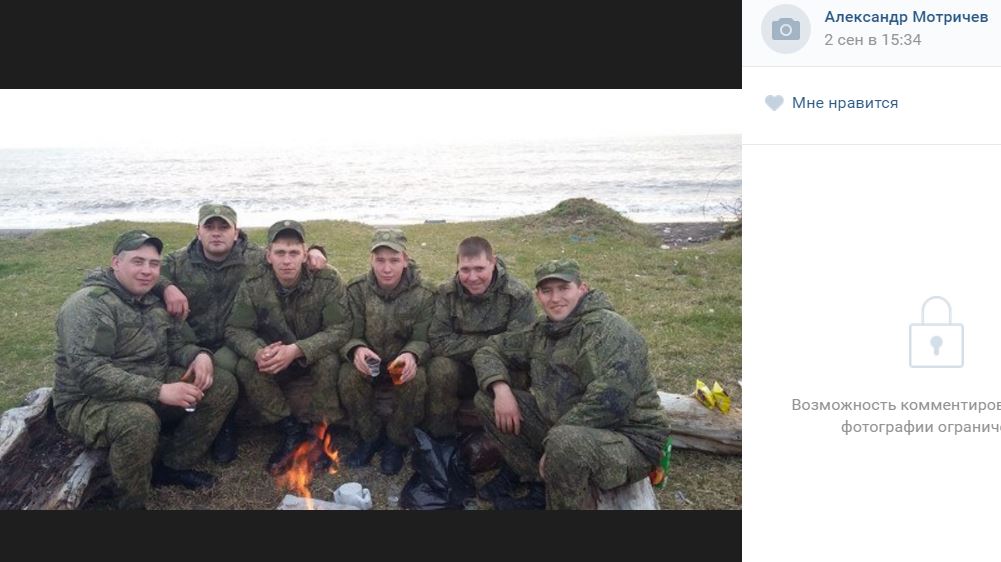 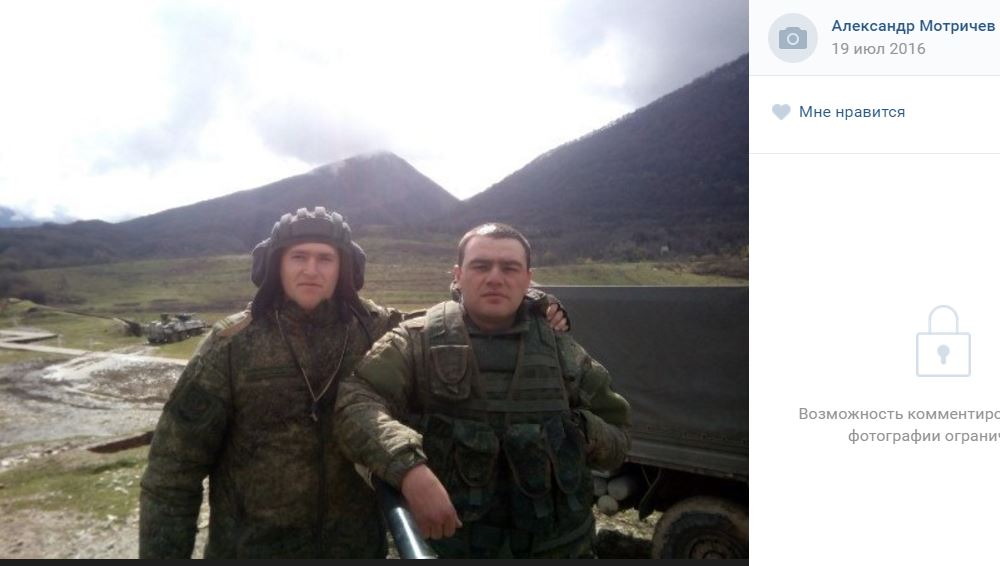 In addition to the pictures, reflecting his service on the 7th Military Base, including shots from Abkhazia training areas Nagvalou and Tsebelda, where Russian occupiers have expanded their base taking and destroying an old cemetery and church, there is a noteworthy photo that shows a certificate of award and the second class Medal of the Order “For Merit to the Fatherland” with swords. This photo was uploaded in January 2016. This is the first time when such award appears in InformNapalm investigations.

Note. The statute of this award states: “The Medal of the Order “For Merit to the Fatherland” with swords of the first and second class is awarded to servicemen for distinguished conduct during combat” (details are available here 1,2,3). 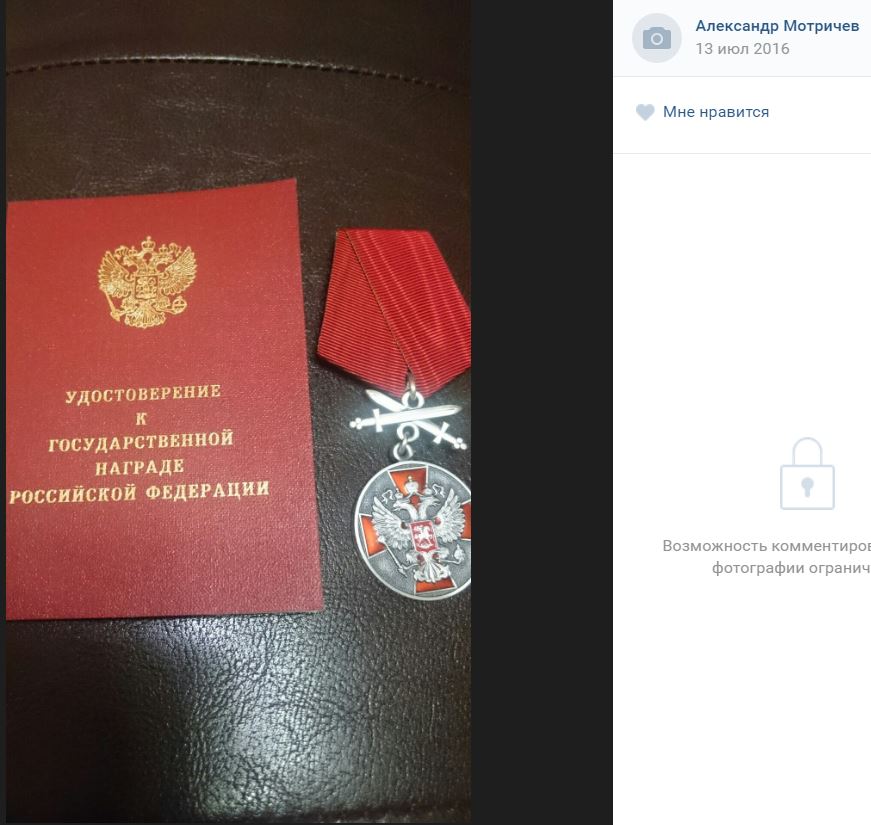 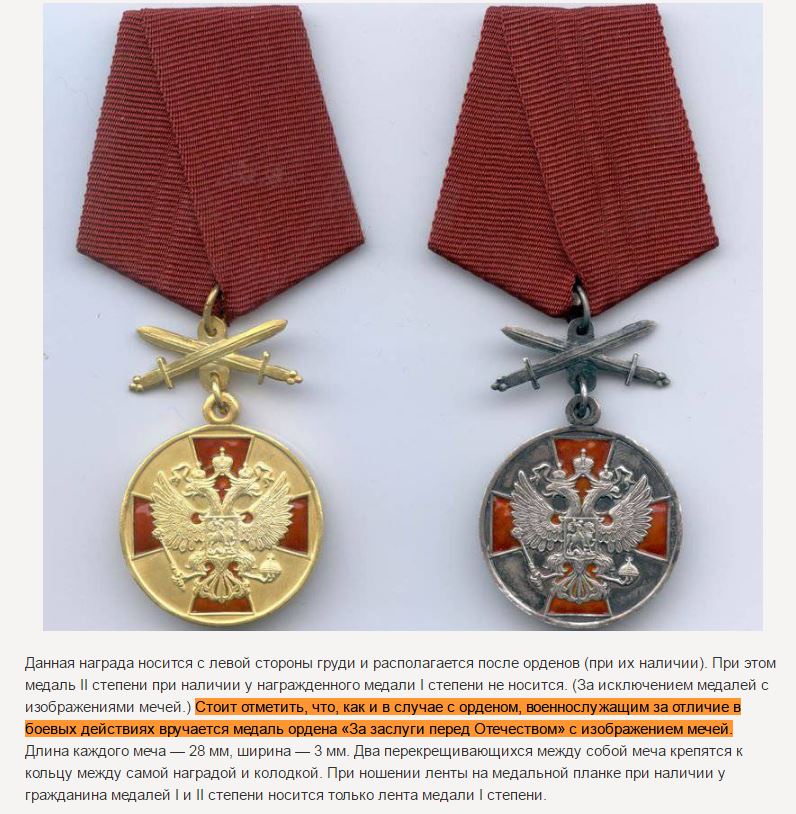 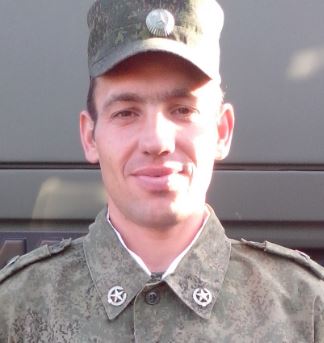 He was born on April 24, 1988, is native of the city of Saratov, Russia. Since the beginning of 2013 he has been a  contract serviceman of the 7th Military Base.

He has an active account on VK 1 (archived profile and contacts) and abandoned accounts on VK 2, VK 3, and on OK.

In one of the abandoned accounts we found a picture of The Medal of Zhukov uploaded in December 2015 (earlier InformNapalm identified 4 recipients of this award). There were some other pictures capturing his service. 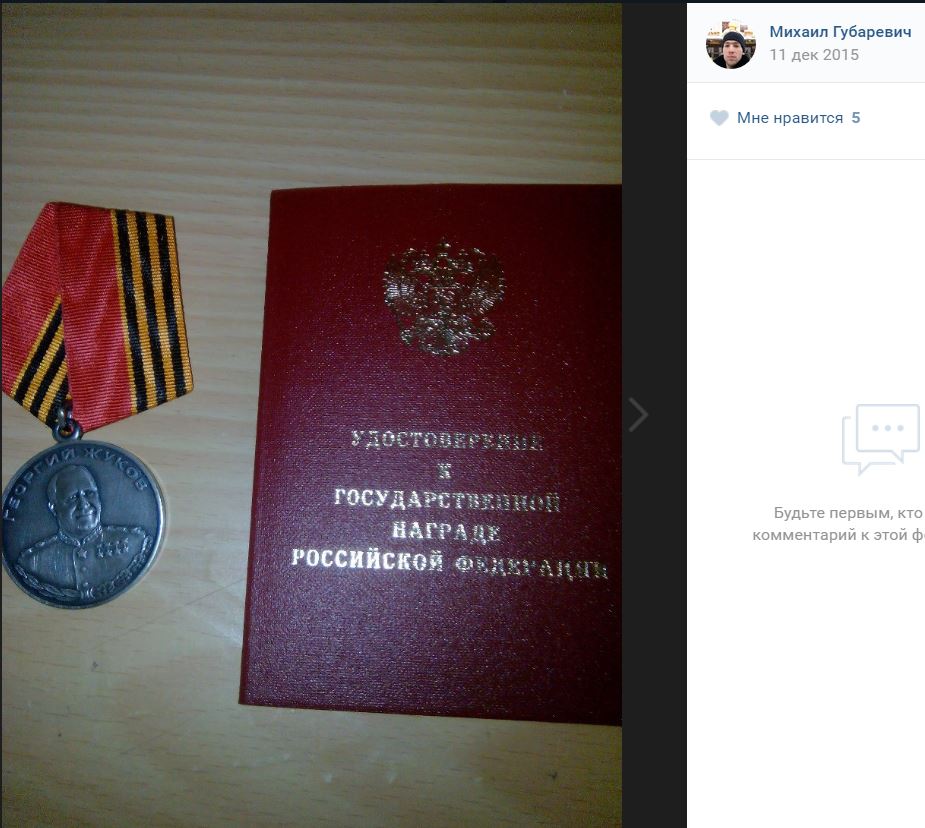 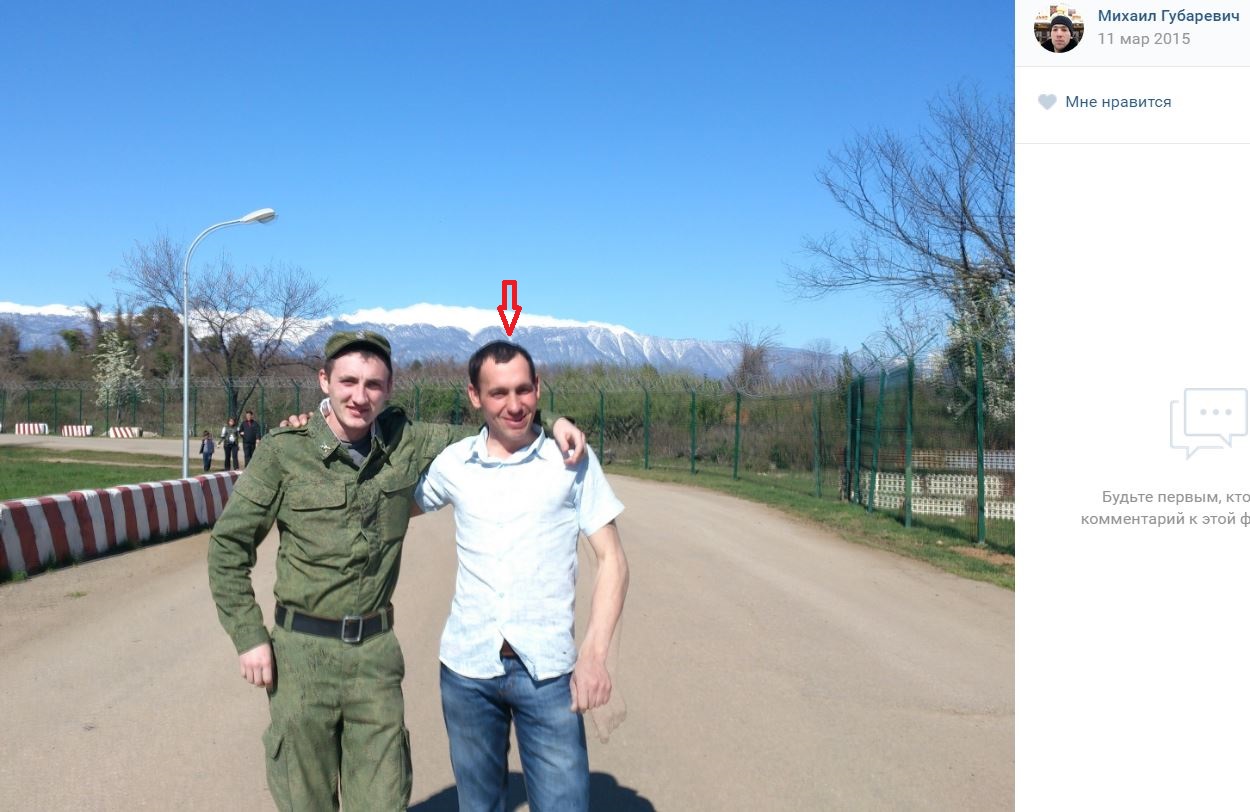 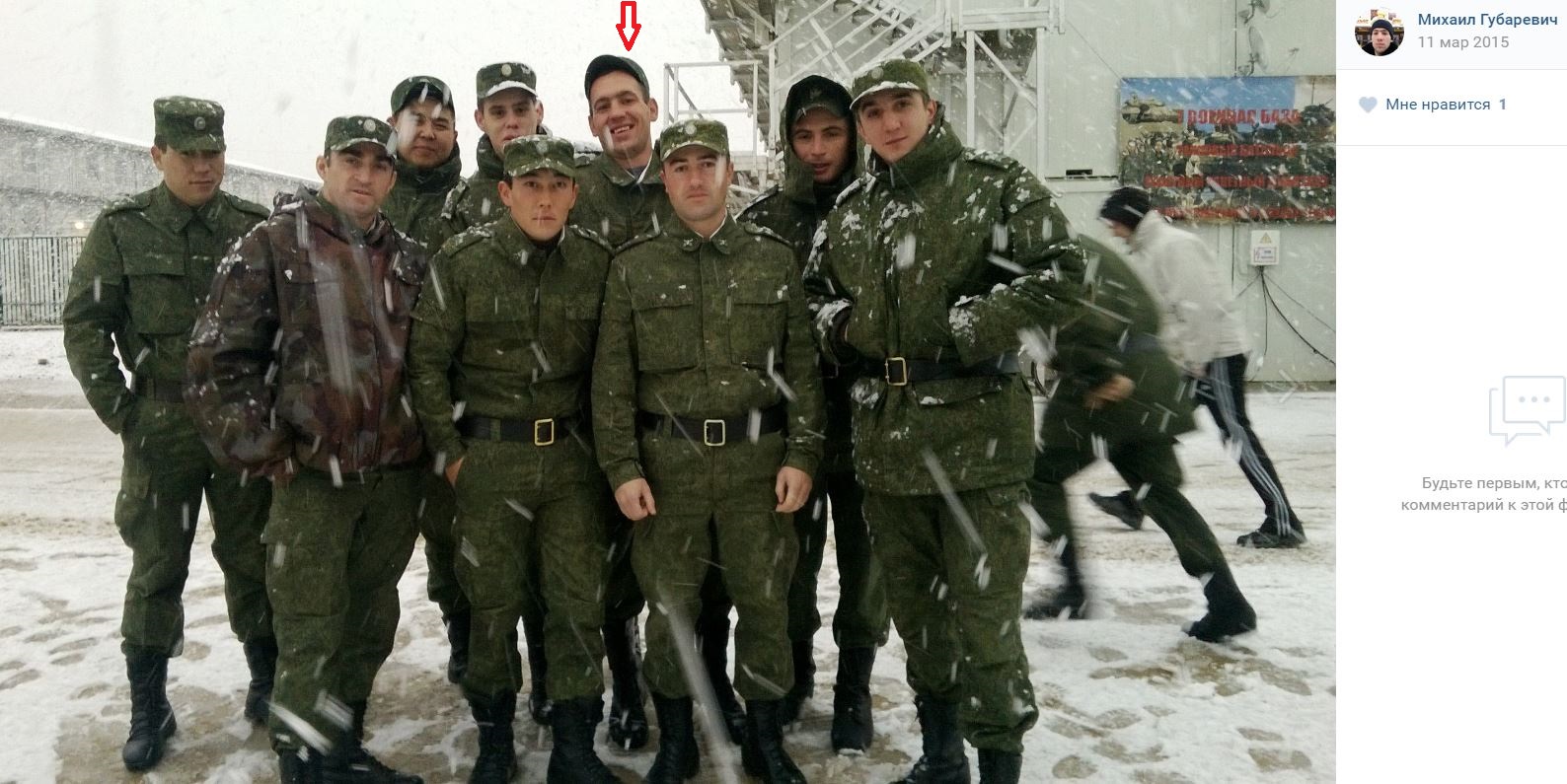 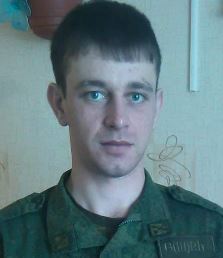 He was born on February 20, 1991, native either of the town Kolpashevo, Tomsk Oblast, Russia, or Nadym. He served in the Russian Army as a conscript in 2011. Since the beginning of 2013, he has been a contract serviceman of the anti-aircraft unit of the  7th Military Base.

According to his photo album, he also served in the Ashuluk training area, Rostov Oblast and Donbas, as it appears from the following pictures: 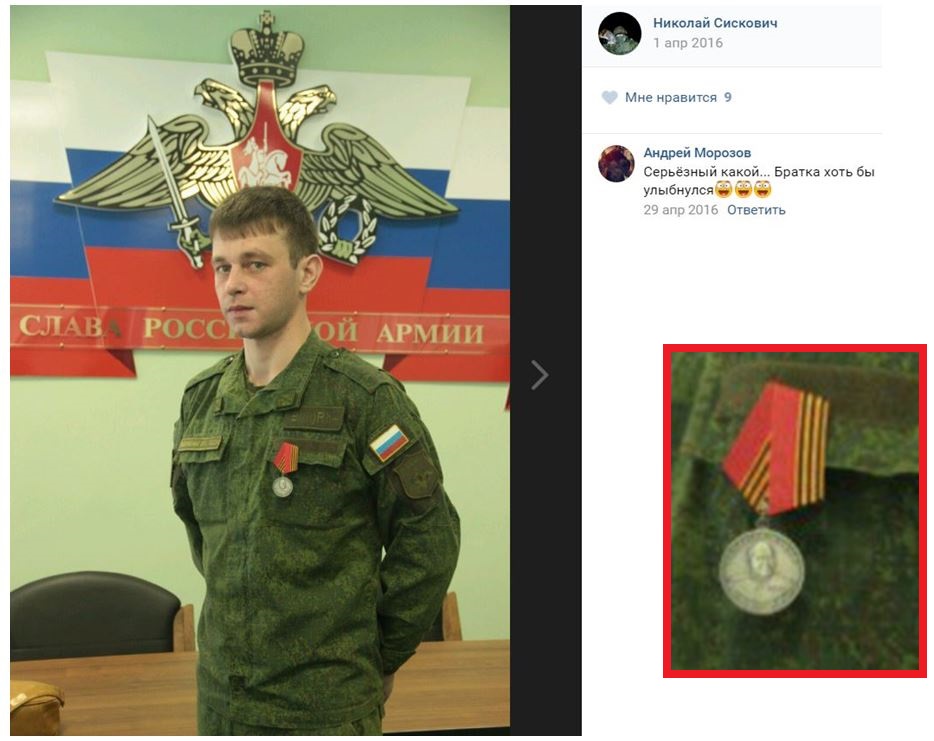 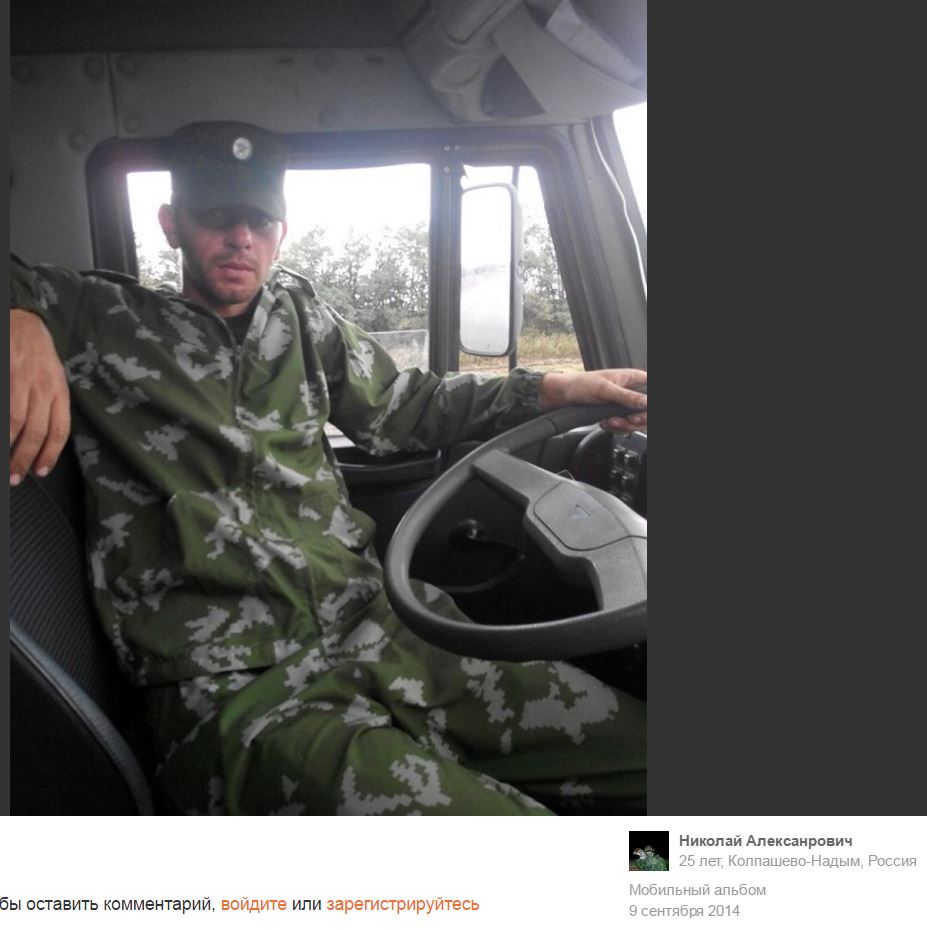 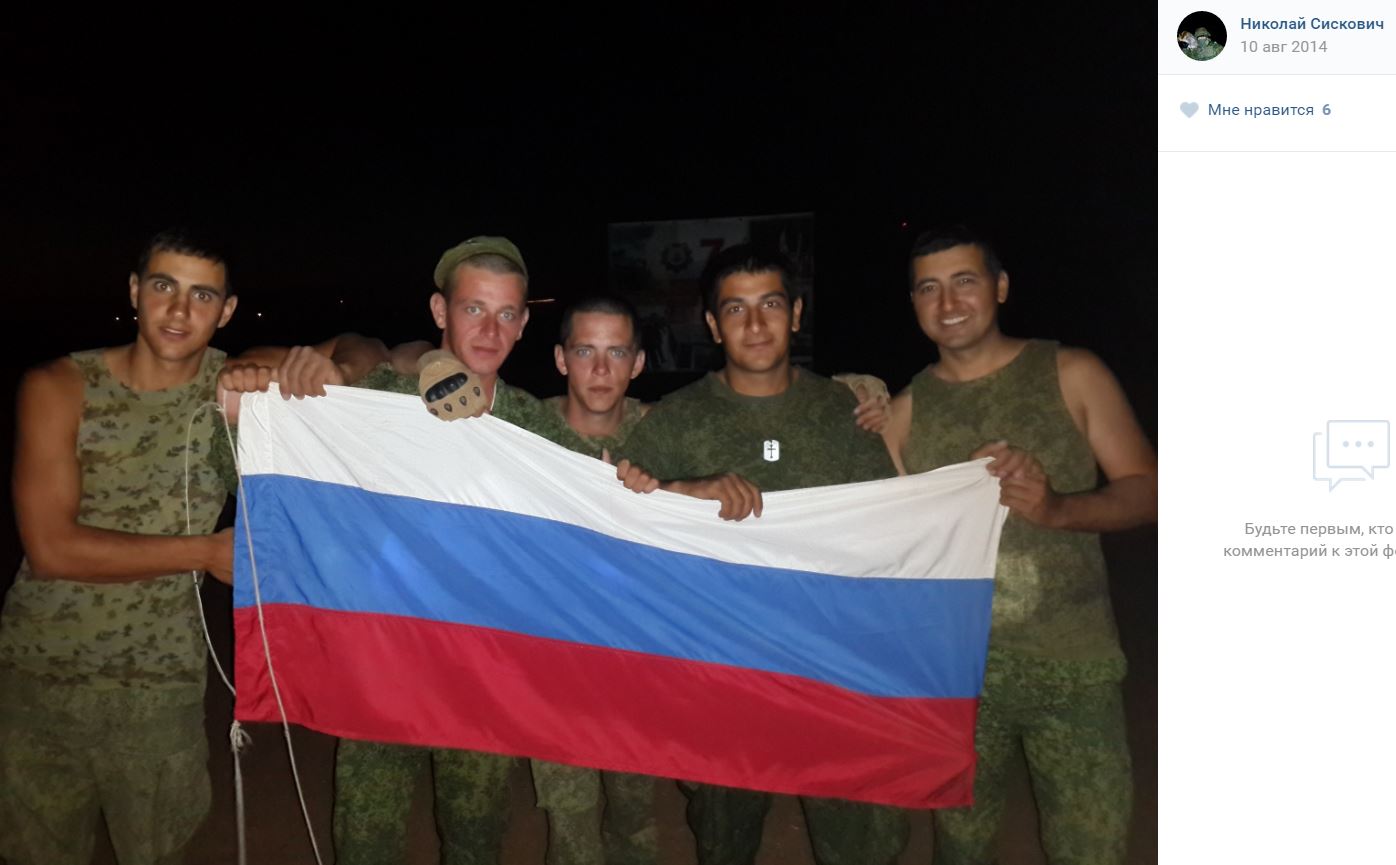 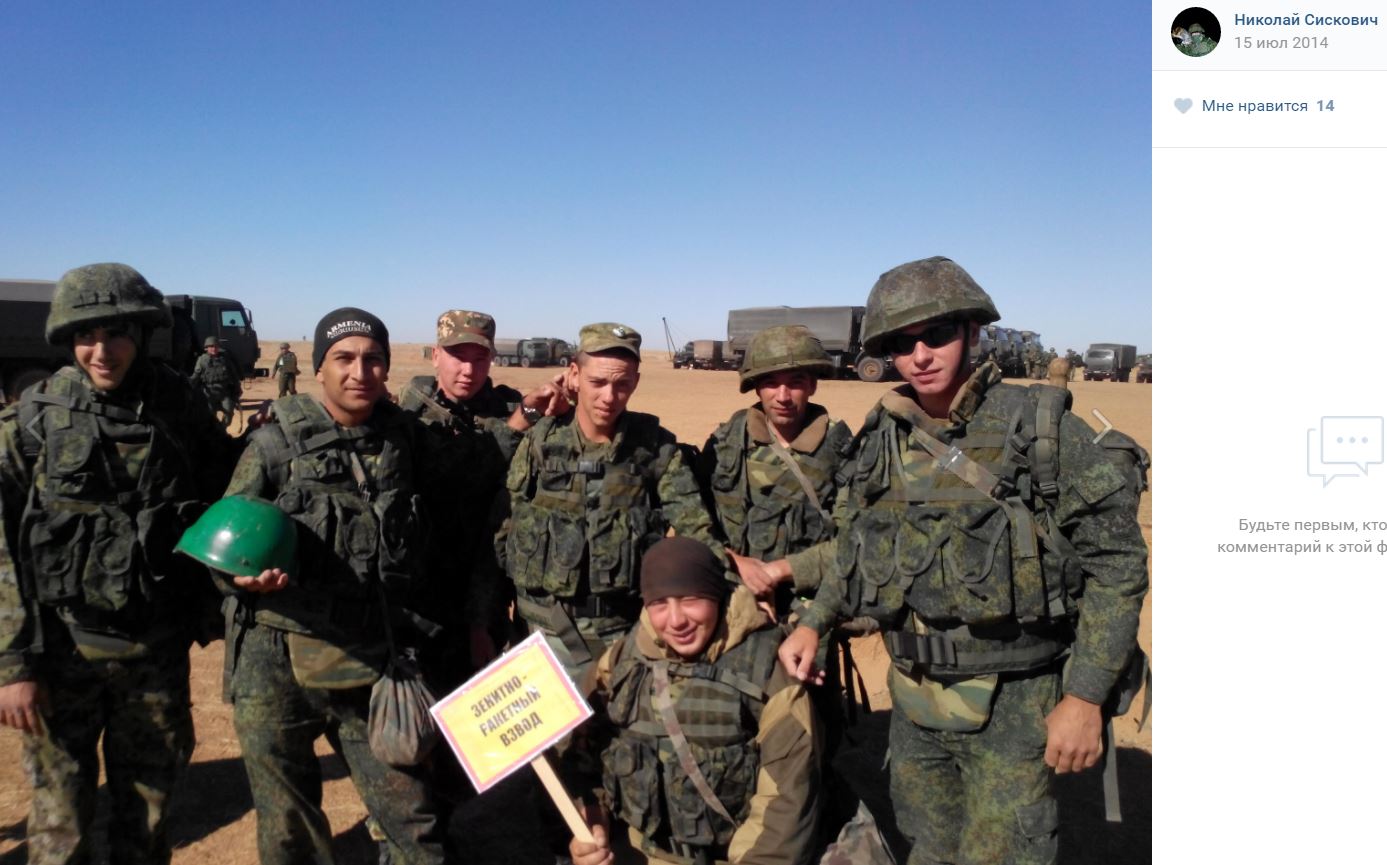 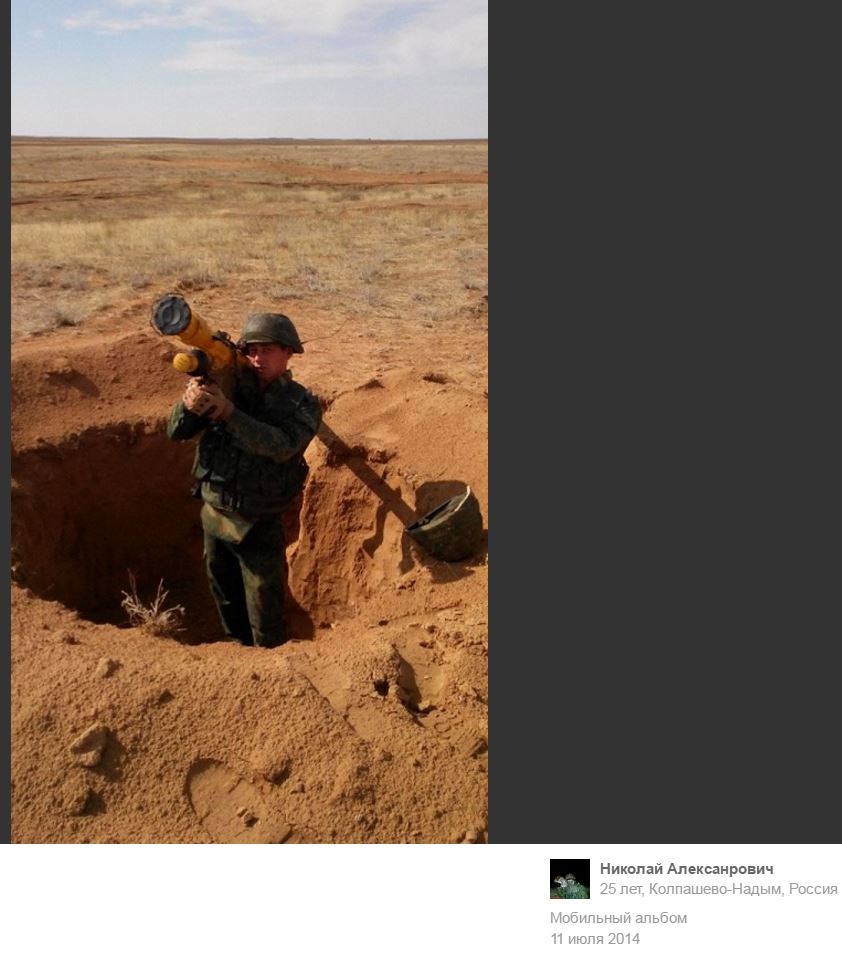 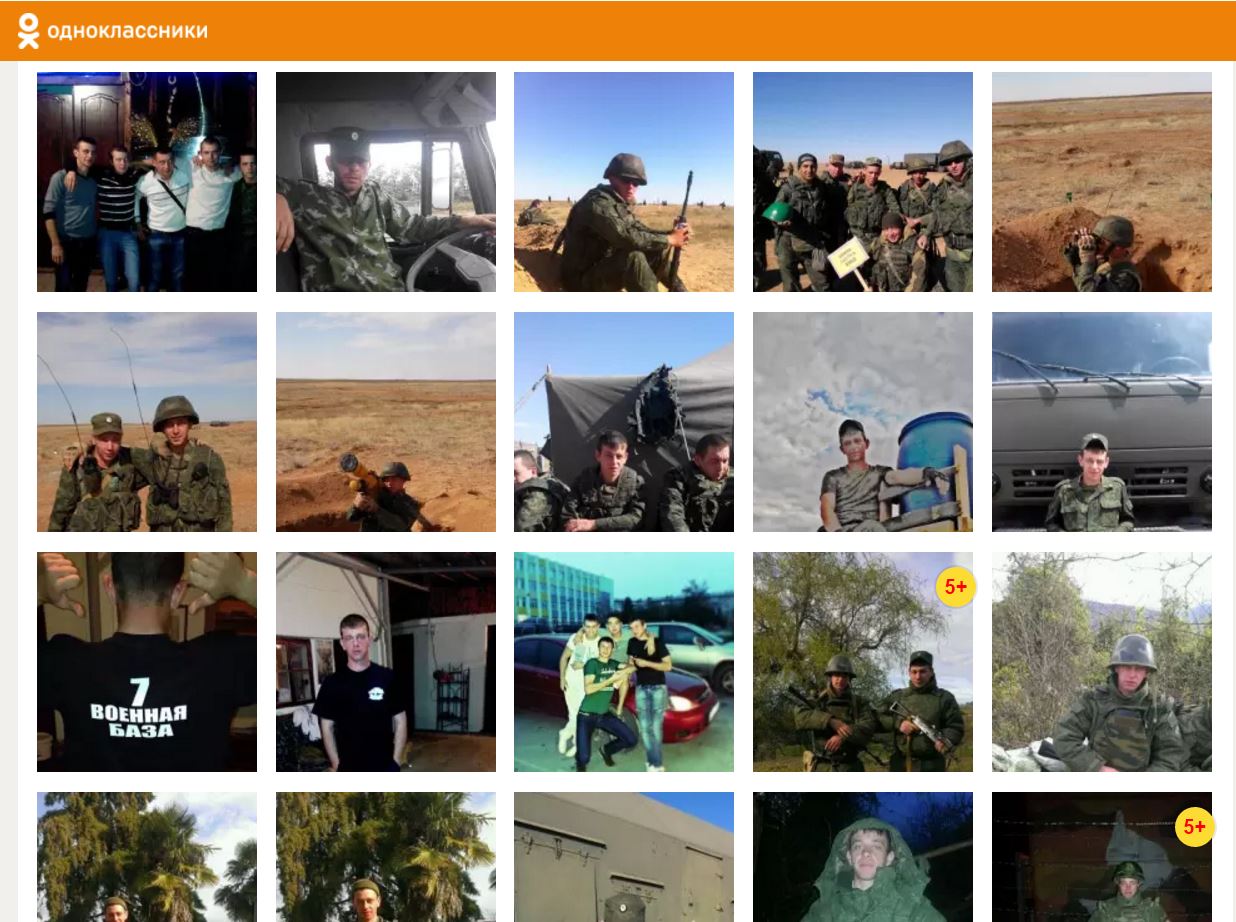 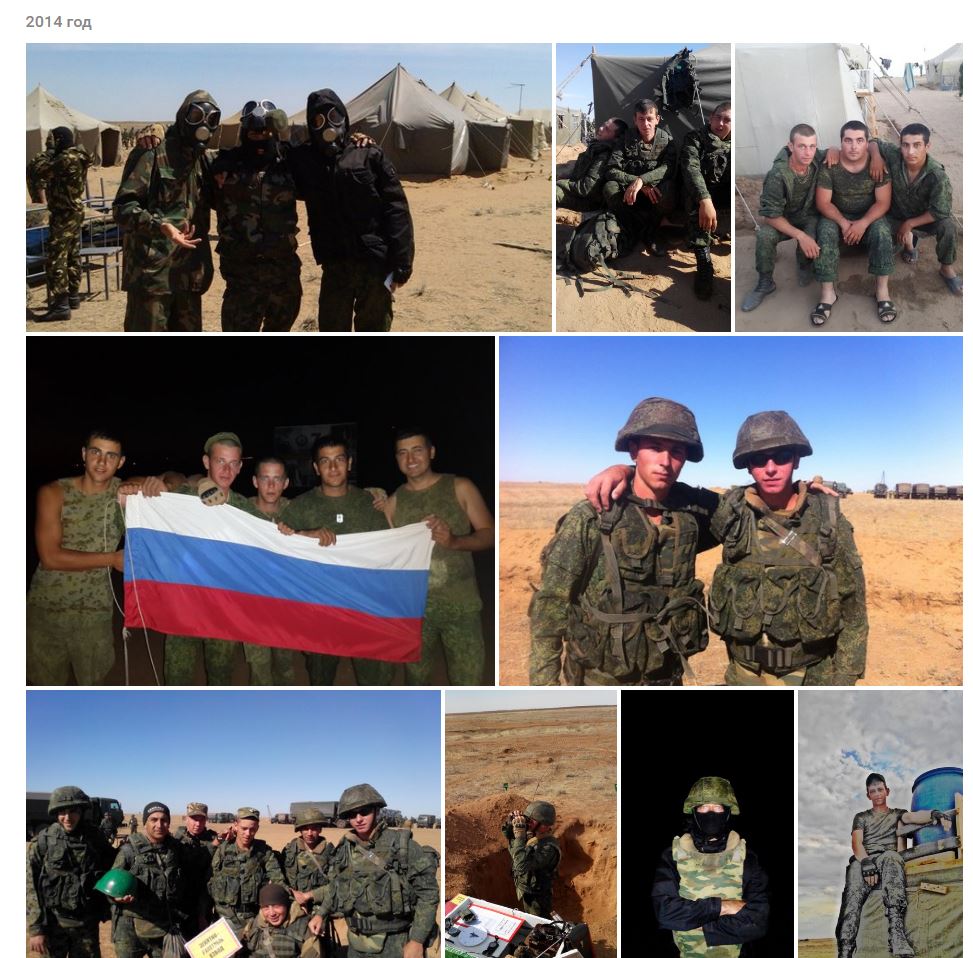 Let us remind you that all previously published InformNapalm investigations, based on the evidence of awarding Russian servicemen with medals and orders for military operations outside the Russian Federation, have been compiled in a database and presented in the form of video and infographics. 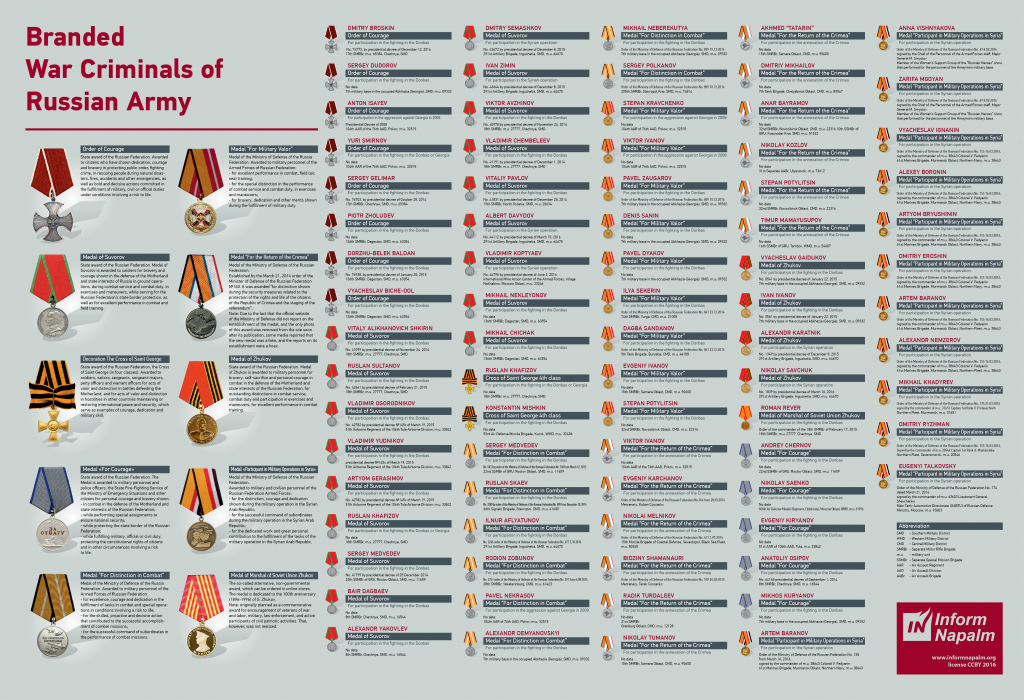 The structure and weaponry of the 7th Military Base of Russian occupation forces. 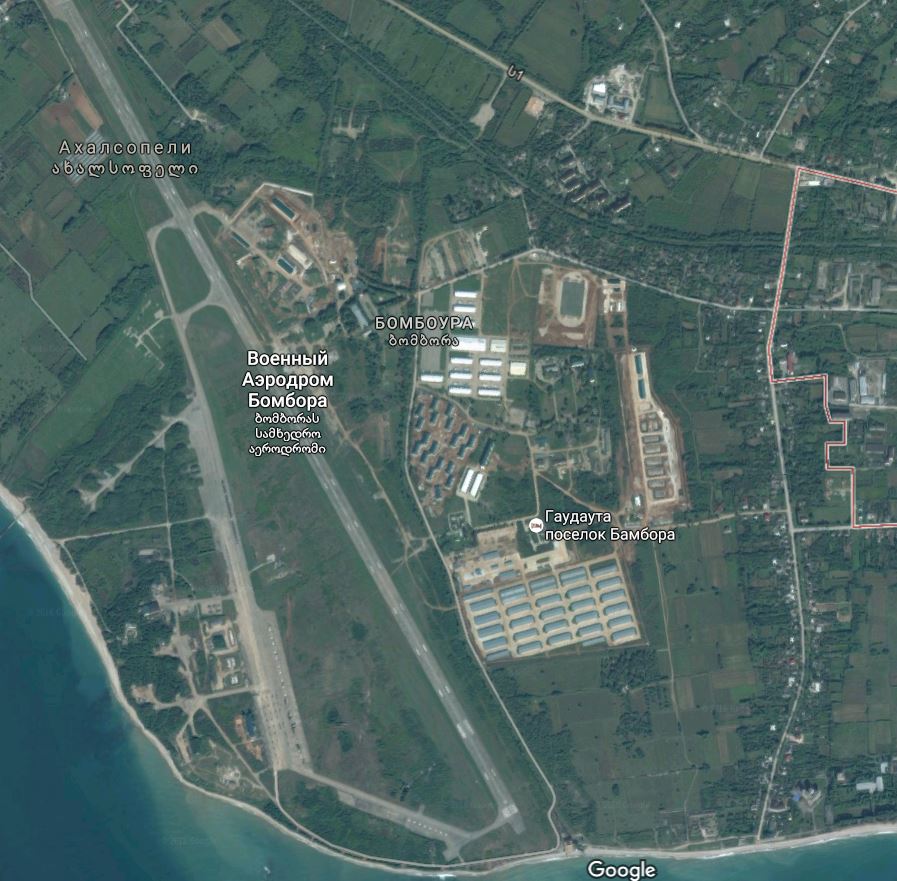 The military base also includes a so-called aviation command office providing ground support for periodic flights of the Russian Airforce planes to the airfield in Gudauta.

Except for a few of our additions, this note is based on the data from milkavkaz.net.

This is the 28th publication of InformNapalm investigating servicemen of the 7th Military Base.

From the mandarin paradise toward the Ukrainian hell’: Russian contract soldiers pressed to fight in Ukraine 2/4/2015

Conscripts of the 7th Russian Military Base massively recruited to become contract soldiers for the “Ukrainian missions”. 3/6/2015

The Dynasty of Russian War Criminals: Biographic Narrative of the Invader  08/15/2016

21 of 35: Russian artillerymen of the 7th Military Base involved in shelling of Ukraine. Identified. Infographics 11/15/20016

From ‘hybrid’ soldier to cadet: Russian Military Intervention  in Ukraine 06/01/2017

We would like to remind you that a database of InformNapalm investigations, proving participation of Russian servicemen in the fighting in Ukraine on the Russian-terrorists’ side, is permanently available at: https://informnapalm.org/database.

This publication was prepared on the basis of an OSINT-investigation by InformNapalm volunteer intelligence community. Author Irakli Komaxidze,  translated by Evgeniy Kalashnik, edited by Svitlana Kemblowski