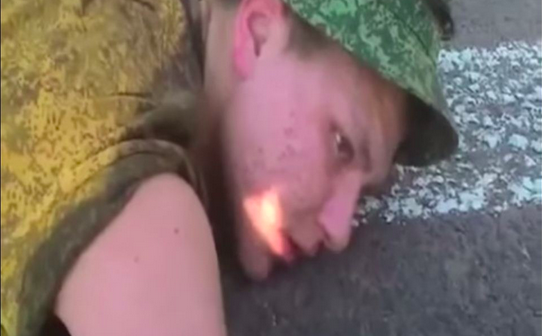 He was telling his cover story, laying on the ground near the village of Berezove, Donetska Oblast: “I quitted the army, there was no job in Anapa [Russian Federation], so I went to fight in Donbas”. These were the words of unnamed militant, presenting himself as an ‘ex-soldier’ of the 7th military during interrogation by the Ukrainian army officers that was later posted on YouTube:

In the video, starting from 1:56, you can find the interrogation of a Russian from Anapa, born in 1995 (his name was not stated to the YouTube channel owner’s fault). This soldier states that he is an ‘ex-serviceman’ of a sniper company of intelligence battalion, the 7th “Peacekeeper” military base (military unit 09332 Southern Military District, occupied Abkhasia, Georgia) who returned to his home city of Anapa after completing the compulsory military service. He decided to go to Donbas where he was promised to be paid 10 thousands RUR per month (which he claims he never received).

We immediately started questioning Russian captive’s words. There is no sense in them. A former sniper company serviceman leaves to DNR on his own for 10K roubles ($200), when at the same time soldiers of the 7th military base are recruited on contract basis with an average salary of 50K ($1000). Our assumption is that the captured Russian is an active contract soldier of the 7th military base with a weak cover story (or he was retired post factum after being captured). It seems that Russian troops assigned to Novorossia armed groups are promised to receive 10K bonus for the “Ukrainian trip”, paid by illegal armed groups in addition to their salary.

According to the our observations, Russian military command recently changed the way troops are deployed to Donbas. Russians stopped using already familiar battalion or company tactical groups (BTG/CTG) during the ‘cease-fire’. Now they assign small groups as reinforcements (mainly weapon experts, scouts and snipers), which dissolve within illegal armed groups. We are drafting a report on this topic right now.

The fact that the active servicemen of the 7th Russian base from Abkhasia are involved in the Ukrainian war was repeatedly proved, check out these links:

Note: this topic was also covered by our colleague and friend Anton Pavlushko on June, 21. In his article you can find some photos of the captured Russian with an upgraded SVD sniper rifle, which is used exclusively by the Russian Army.

The video was provided by our friend and reader საქართველო უპირველესყოვლისა.