Nostalgia for murders. Russian traffic policeman in the ranks of the Ryazan illegal armed group 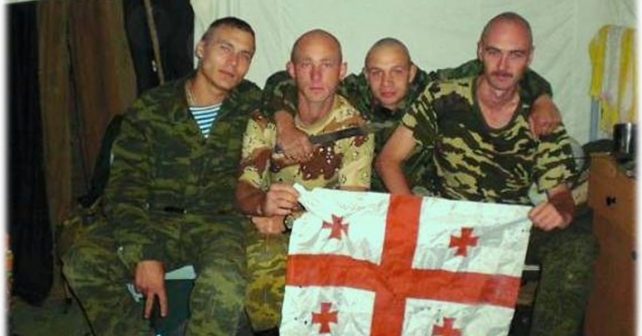 Russian traffic policeman was a participant of the Russian aggression against Georgia and a member of a Novorossia’s illegal armed group.

The current Russian aggression against Ukraine and the Russian aggression against Georgia in 2008 have much in common. In both cases, the conflicts had been provoked by Russia: they began with support of pro-Russia separatists and then were followed by invasions into the respective sovereign countries. The peoples of Georgia and Ukraine, who chose their own independent path instead of vassal dependence on Russia, were left one-on-one with the Kremlin aggressor, with a mere “sympathy” of the world community.

A hybrid war, similar to what has been going on in Ukraine today, was fought in Georgia back in the early 90’s of the last century: there were thousands of Russian “volunteers” (Cossacks, North Caucasians, etc.), deliveries of weapons and ammunition under the guise of humanitarian aid, professional military servicemen acting as instructors and commanders of illegal armed groups, as well as the forces and means of the Russian army directly involved in the conflicts.

Very often, armed people who encroached on Georgian statehood back in the 90’s and later, now do the same in Ukraine.

A good example of this is the InformNapalm publication from November 18, 2015 Confession of a paratrooper from Pskov: out of the 18 paratroopers mentioned there – “veterans” of the Russian aggression against Georgia in 2008 at Samachablo region (Tskhinvali region, or the so-called South Ossetia), six participated in the Russian undeclared war against Ukraine.

A new OSINT investigation of InformNapalm international intelligence community has identified an officer of the Russian traffic police who participated in the Russian invasion of Georgia in 2008 and fought for Novorossia as a mercenary in the Donbas, Ukraine, in the autumn of 2015. 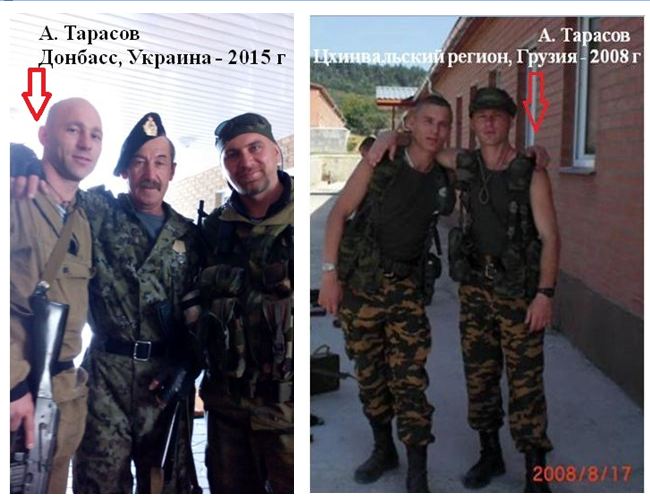 The subject of the investigation is Andrey Tarasov, born on August 15, 1985, originally from the village of Komsomolskoye, Krasnokutskiy district of Saratov Oblast, who now lives in Segezha, Republic of Karelia, married.

He served as a conscript in the Border Service of the Russian Security Service (FSB), in the Vyborg Border Detachment. In 2008, he was a contract serviceman in the rank of sergeant in a special operations brigade of the Main Intelligence Directorate (GRU), presumably, the 22nd Special Operations Brigade, military unit 11659, based in the village of Stepnoy, Rostov Oblast. In 2011-2012, he was employed by the Severniy Legion private security company.    Since 2012, he has been a Warrant Officer (Praporshchik) of the traffic police battalion in Petrozavodsk. He practices martial arts, participated in and won several competitions organized by the Russian Ministry of Internal Affairs and the FSB.

Some photos from August 2008 were taken at the Russian military base in the town of Java, Tskhinvali region (the barracks of red brick). The base was illegally built by Russia a few years prior to the events of August 2008, in violation of all the agreements, and did not have the peacekeeping status. It served as an unofficial base for reconnaissance units, for storing military equipment and weapons and training separatist illegal armed groups. 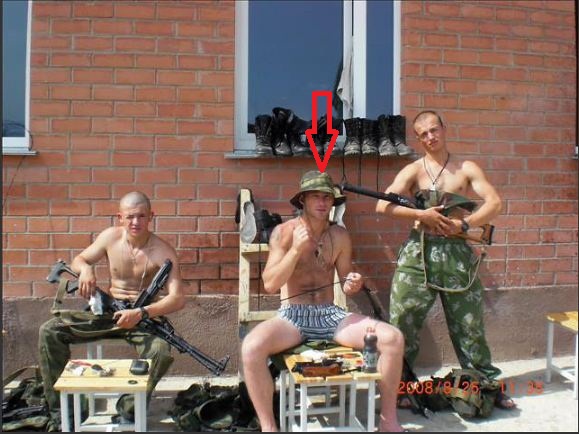 Some photos from the same period show vandalism and looting done by the Russian aggressors who destroyed Georgian administrative buildings. There is also a photo of a Tigr infantry mobility vehicle (IMV) with a sign of the Peacekeeping Forces hastily painted on its sides. 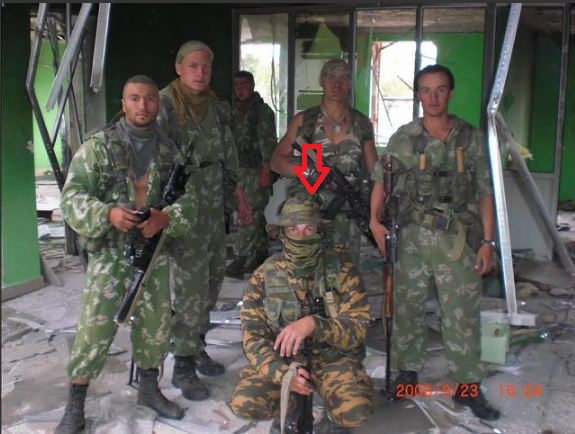 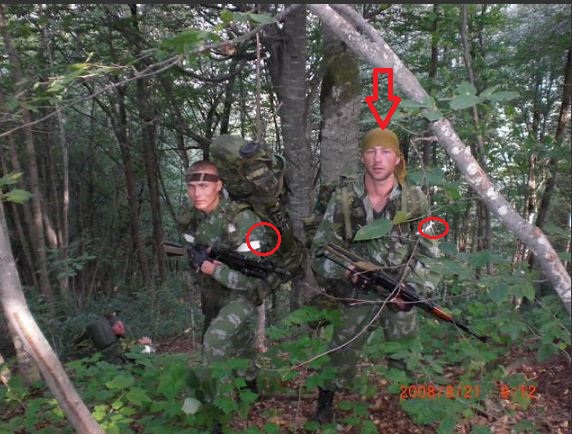 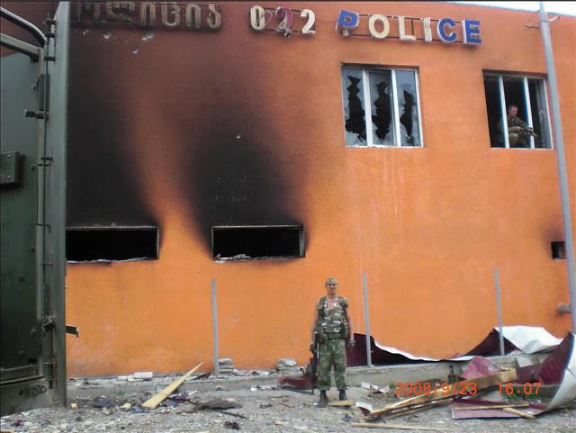 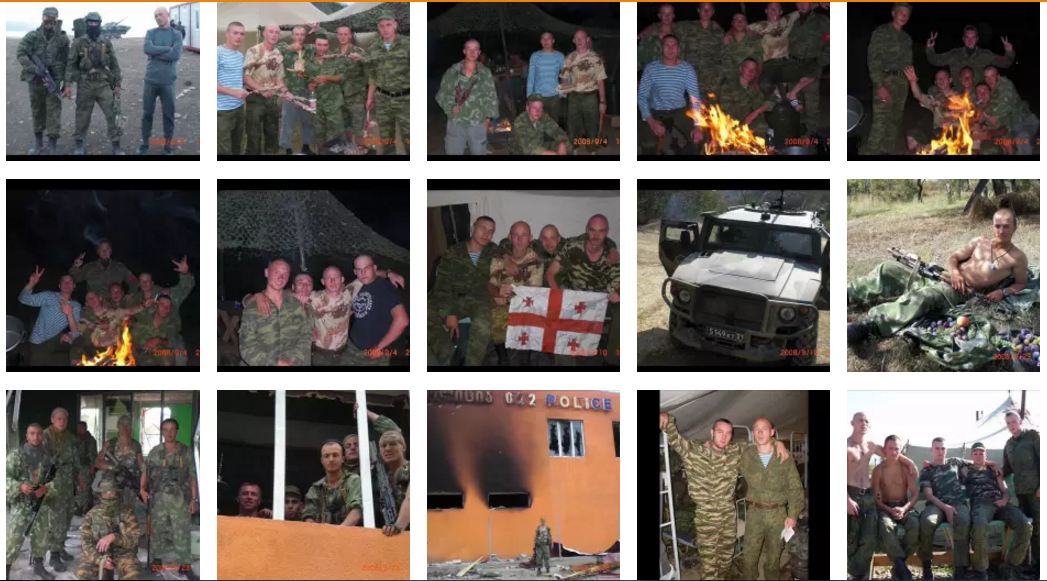 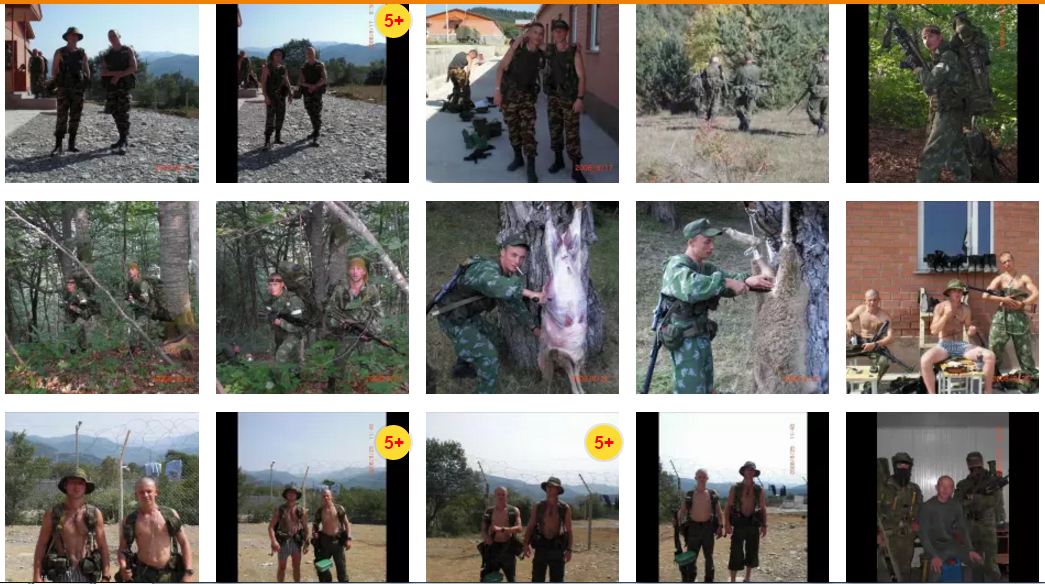 After discharge, as noted above, Tarasov worked briefly in a private security company and was into sports. In 2012 he started working in the traffic police of the Russian Ministry of Internal Affairs, where he serves up to this day. 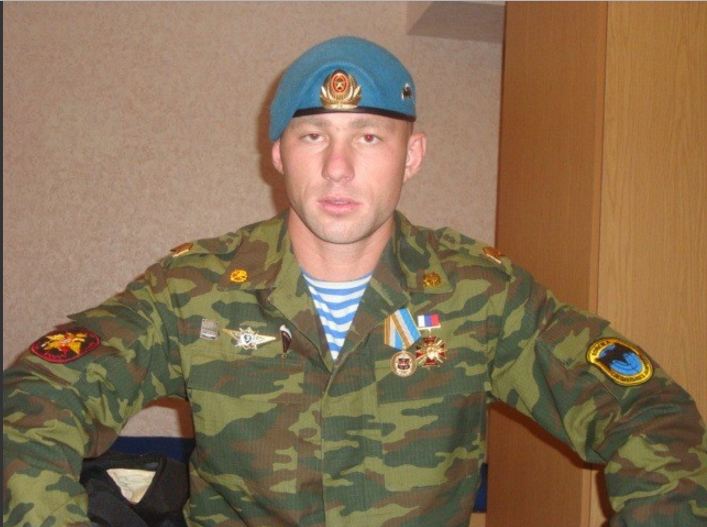 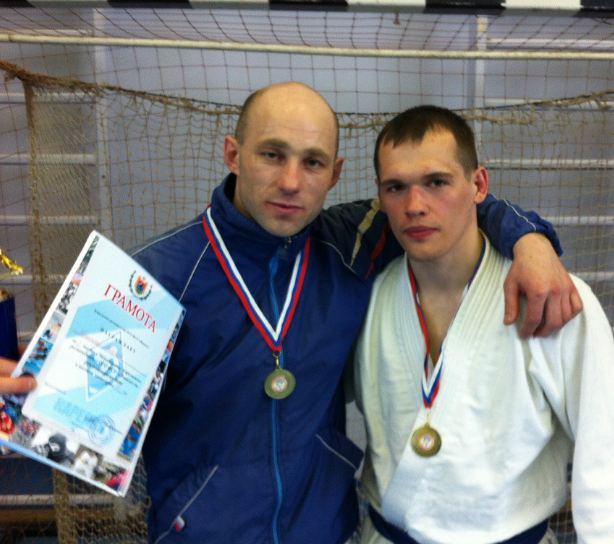 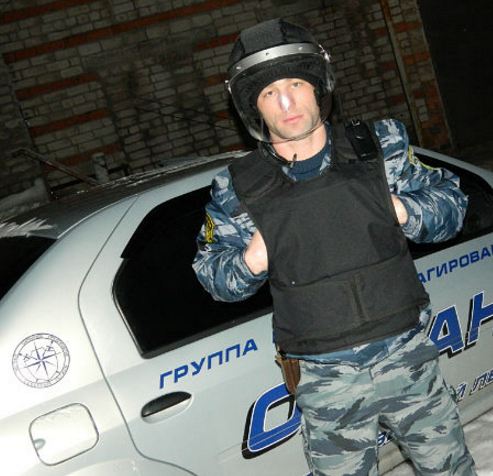 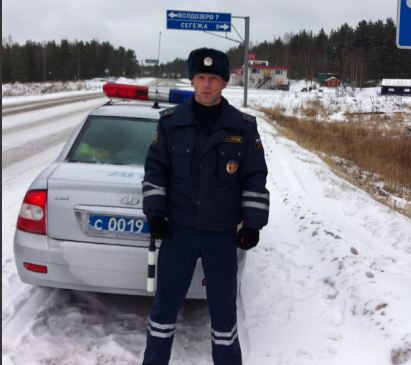 Among Tarasov’s photos that were uploaded to his album in October 2015, there was an earlier photo of a BTR-80 armored personnel carrier (APC) with “Ryazan” and “Reconnaissance“ written on it that indicates Tarasov’s connection with recruiters and his intention to go to Donbas as early as in 2014. “Ryazan” here is a name of the sabotage and reconnaissance group that was a part of Novorossia’s illegal army, militants from which are friends with our protagonist. It is worth reminding, that we have already written about former Russian special forces guys fighting in the Ryazan unit (see Retired Spetsnaz). 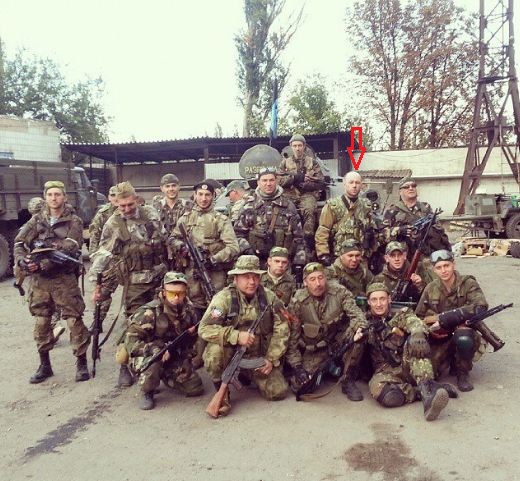 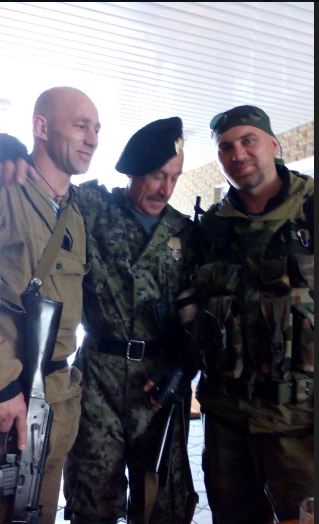 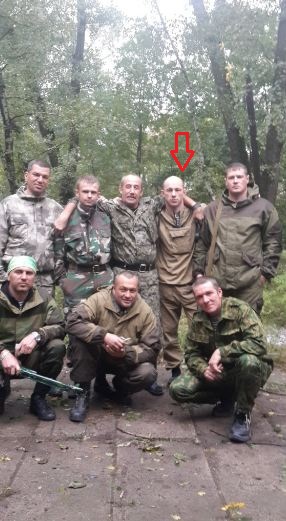 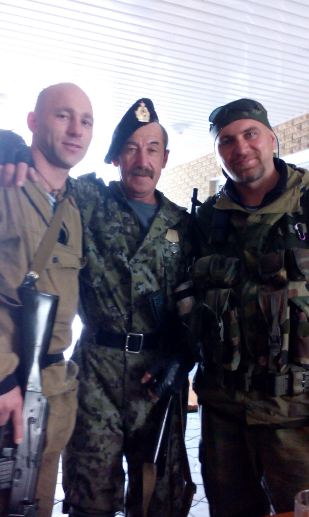 Background information: in August 2008, Russian intelligence agencies, using their South Ossetian separatist puppets, provoked a military conflict in Samachablo region (Tskhinvali region or the so-called South Ossetia), Georgia. The Russian “peacekeeping forces” deliberately did not respond to the activation of militants who conducted well-targeted shelling of the Georgian villages in the region. After the Georgian army was forced to launch an operation to ensure the safety of the population in Tskhinvali region in the territory of the sovereign state of Georgia, and started to localize the activity of the provocateurs-separatists, Russia announced the beginning of the “peace enforcement” operation, which resulted in the open aggression of Russia against Georgia followed by the occupation of Abkhazia and Samachablo regions, as well as the ongoing so-called creeping occupation. Russia’s military invasion in 2008 killed 408 citizens of Georgia, including 170 soldiers. The number of refugees and displaced persons increased by 26 thousand people. The total number of refugees in Georgia, who had to leave their homes because of the conflicts, either inspired and supported by Russia or with the direct participation of Russia, is more than 260 thousand people. More than 20 percent of the territory of the country is occupied.

P.S. While this article was getting ready for publishing, Tarasov’s social network pages have been mysteriously cleaned up. Everything that proves the protagonist’s participation in war crimes in Georgia in 2008 and in Ukraine in 2015, has disappeared from his account. But, as they say, “Google keeps your data forever”, and sooner or later he will be called to account, and the evidence base we have collected will be in demand by the international investigative bodies.

This publication was prepared on the basis of own OSINT-investigation. Author Irakli Komaxidze

(CC BY) Information was prepared exclusively for InformNapalm.org site, an active link to the authors and our project is obligatory for any reprint or further use of the material.

No Responses to “Nostalgia for murders. Russian traffic policeman in the ranks of the Ryazan illegal armed group”