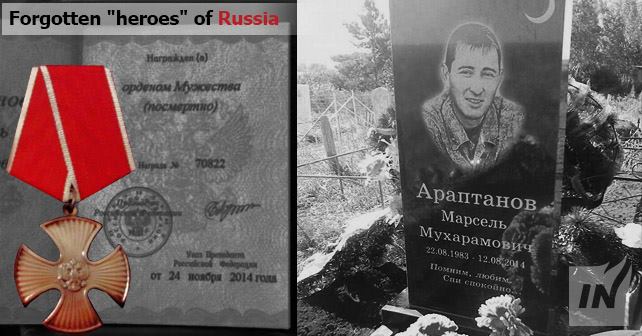 While the Russians have forgotten their next hero of the war they deny they fight, some of his friends still remember the deceased and honor his memory. InformNapalm also did not stand aside: our international intelligence community found some new information about the Russian contractor who was killed in Ukraine in August 2014.

Even at the initial stage of the Russian invasion of Ukraine, at the end of August 2014, it became known about the death of Marcel Araptanov, a contract serviceman of the 17th Separate Motor Rifle Brigade (until recently, military unit 65384, currently military unit 71718; the brigade is being reorganized into the 70th Regiment as part of the new 42nd division; town of Shali, Chechnya), originally from Bashkortostan. At that time this news (TV-stories of Dozhd and Fn24.ru) caused a great resonance, including in Russia. Moreover, at that time, the Russian agencies engaged in censorship were in some confusion and did not always control the leakage of information about the losses of their military in the Donbas.

InformNapalm volunteers also did not miss this news; they found a page on social website of the killed contract serviceman who was a “veteran” of the Russian invasion of Georgia in August 2008 (currently his account is deleted). Another reason why the Araptanov’s death became resonant was a frank Anti-Kremlin post of his sister Dinara – a photo with a print of the “Ukrainian boot” on the image of V. Putin. 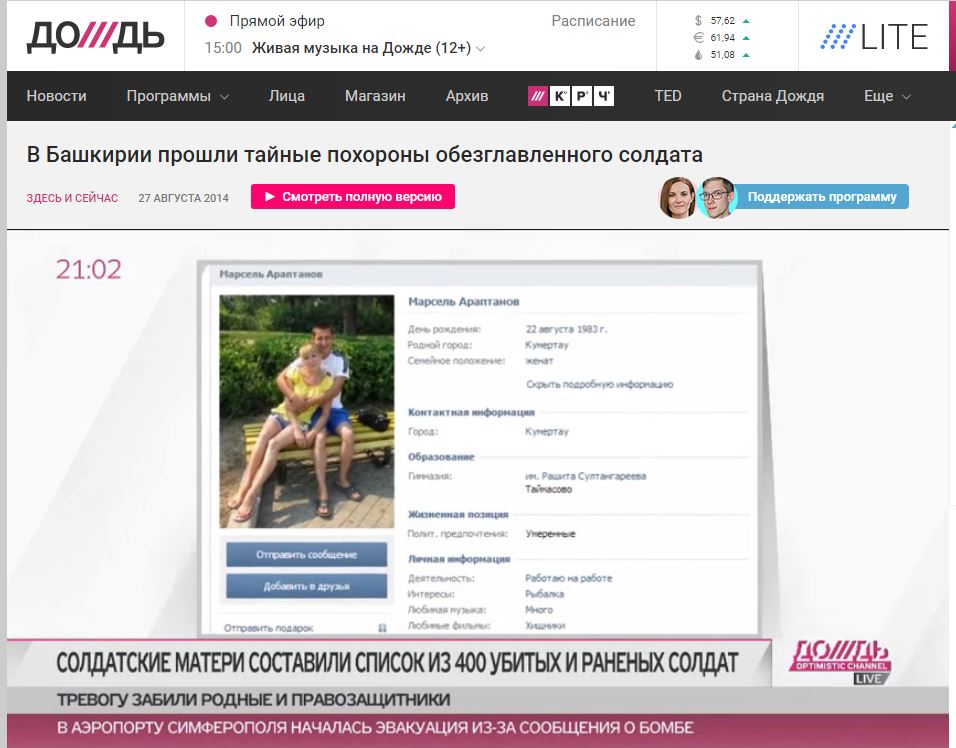 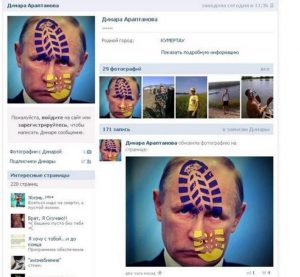 Note: subsequently, Marcel Araptanov’s name appeared in other materials of our community, including the September 9, 2014 publication with evidence of the presence of servicemen of this brigade in Ukraine and the publication from February 6, 2015 with a memorial to the servicemen of the 17th Separate Motorized Rifle Brigade killed in Ukraine in August 2014.

Two and a half years passed since the death of Marcel Araptanov. He was killed on August 12, 2014, and was buried on the day of his birth, on August 22, secretly, without special honors in his native village of Novotaymasovo (Bashkiria). Even then, in the hot pursuit, Russian propaganda in the aforementioned Fn24.ru story, managed to tell about the death of a Russian soldier, allegedly killed on the territory of Russia by a stray projectile from Grad, which was shot from Ukraine. Since then, few people remember about Marcel, including his sister who in 2015 changed the rhetoric, and over time her activity in social media evaporated. Apparently, this happened after the “educational work” of the FSB and “bonuses”, which the family received as compensation for the silence.

Bur, apparently, Marcel Araptanov still had loyal friends. So one of them, his fellow countryman, a certain Muslim Ismailov, on February 8, 2017, on the page of the group “17 << OMSBR >> Chechen Republic town of Shali” on social website VK, made a post in memory of Marcel, which scored just a dozen likes and no comments. 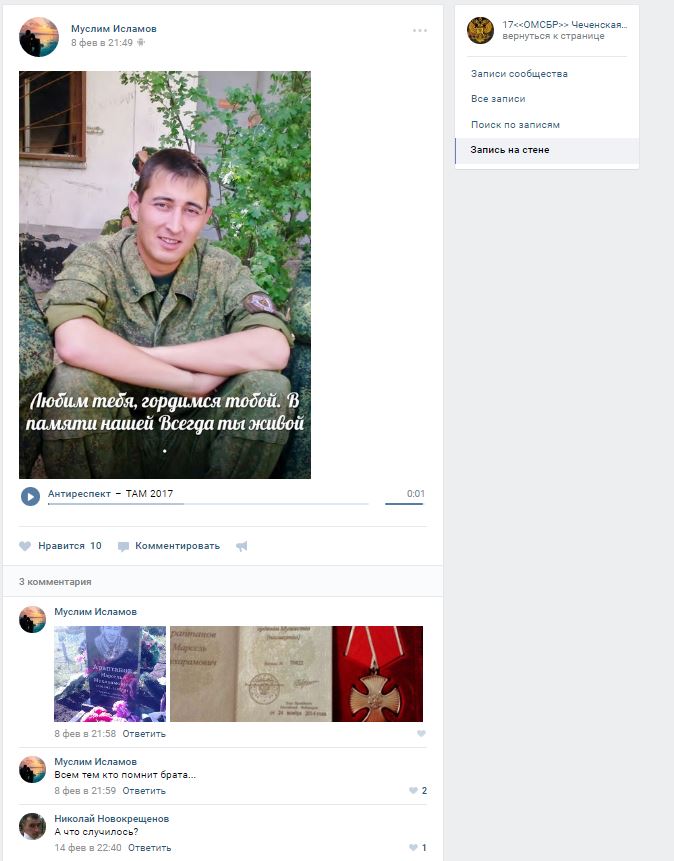 This post is of interest because of the photograph of the order and the Marcel Araptanov’s Award Certificate for the Order of Courage No. 70822, issued posthumously by the decree of the President of the Russian Federation V. Putin dated November 24, 2014 (the fact of the posthumous awarding of M. Araptanov was not announced). 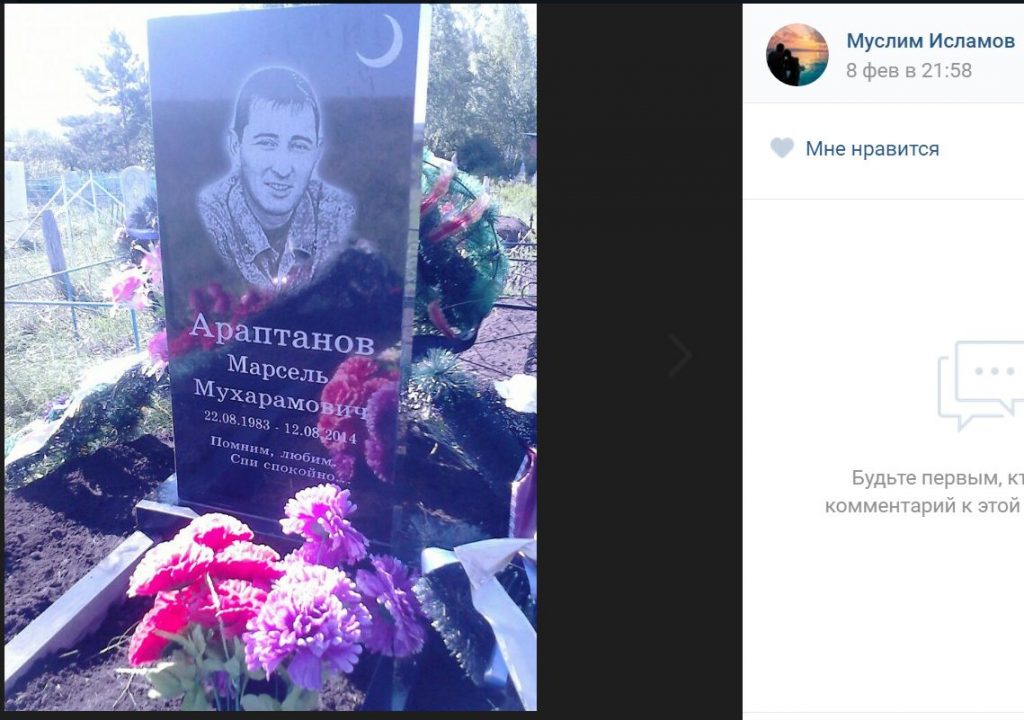 Note: the Order of Courage is a state award of the Russian Federation. The Order of Courage is awarded to citizens who showed dedication, courage and bravery in protecting public order, fighting crime, in rescuing people during natural disasters, fires, accidents and other emergencies, as well as for bold and decisive actions committed during the performance of military or civil duties under conditions involving a risk to life.

The posthumous awarding of a Russian contractor who “accidentally died hit by a stray shell that flew from Ukraine” does not fit into the clauses of the order’s regulations. It turns out that the Kremlin and the Defense Ministry still recognized the fact that Marcel Araptanov was killed in Ukraine during the fighting. And all this – for the sake of the silence of his loved ones. Most likely, the order is not the only bonus to Araptanov’s family. Probably, his grave stone was paid from the Russian treasury.

The 17th Separate Motorized Rifle Brigade appeared in 15 of InformNapalm investigations, mainly about the invasion and fighting in the Donbas in the summer – autumn 2014. But there is evidence of the later participation of contractors from this brigade in the Russian-Ukrainian war (more under the hidden link).

Databases of Russian military personnel and evidence of their participation in hostilities in Ukraine on the side of the joint Russian-terrorist forces, including awards (two more servicemen of the 17th Separate Motorized Rifle Brigade were noted being awarded the Orfer of Courage) are available by permanent link: https://informnapalm.org/database/.

This publication was prepared on the basis of an OSINT-investigation by InformNapalm volunteer intelligence community.