Another ‘Hybrid Miner’ from the Russian 17th Brigade 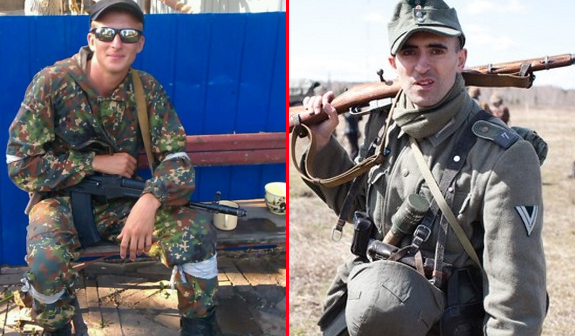 For nearly two years, the official Kremlin brazenly and with enviable persistence continues to deny the fact that the Russian army is involved in hostilities in the territory of Ukraine. And the mendacious Russian authorities are supported by thousands ideological heralds with slogans: ‘there is no Russian Army in Ukraine’, ‘prove it’, ‘you are lying’, etc. However, the facts still show that the most battle ready units of the Armed Forces are sent to the war as parts of the separate battalion tactical groups..

This time another participant of the undeclared hybrid war disclosed himself ‘in a usual manner’ – junior sergeant Sergei Belozerov from Zheleznovodsk (callsign ‘Belyi’ [White]), born on December 12, 1991. Mobile phone No. 8-961-497-54-50.

At the time of the invasion of his unit in Ukraine (August-September, 2014) Belozorov was a serviceman of the 17th separate motorized rifle brigade (military unit No. 65384, Southern Military District, Shali, Republic of Chechnya, Russia). This is evidenced by: 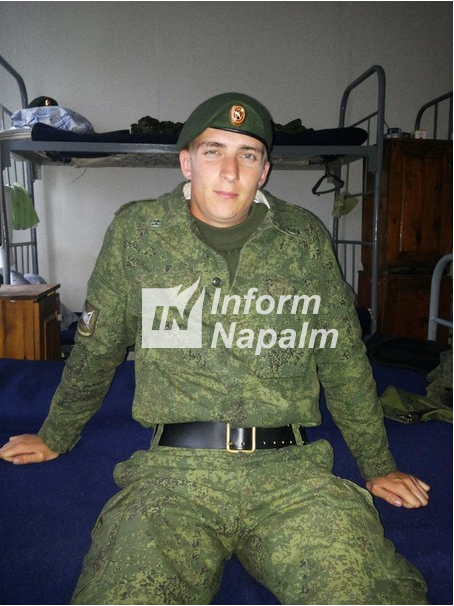 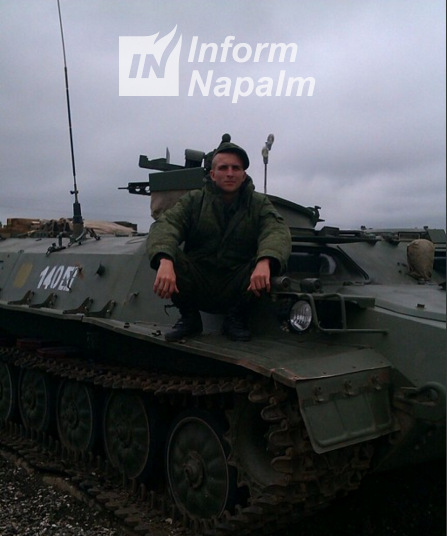 In the beginning of August, 2014, Belozerov was sent to the Kuzminskiy training camp (Rostov Oblast), where he was trained to break through the border (archive 1, 2, 3). 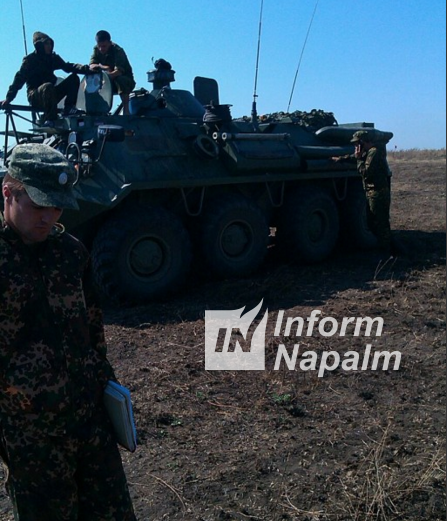 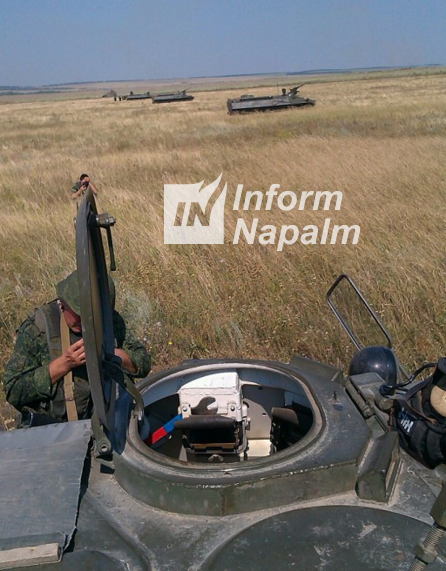 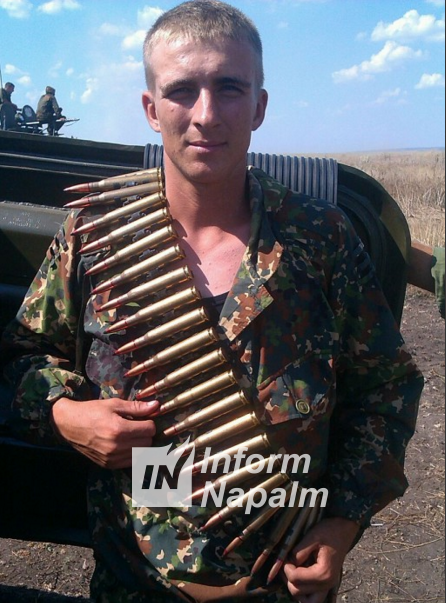 Geotags in the VK profile confirm this assumption (archive). 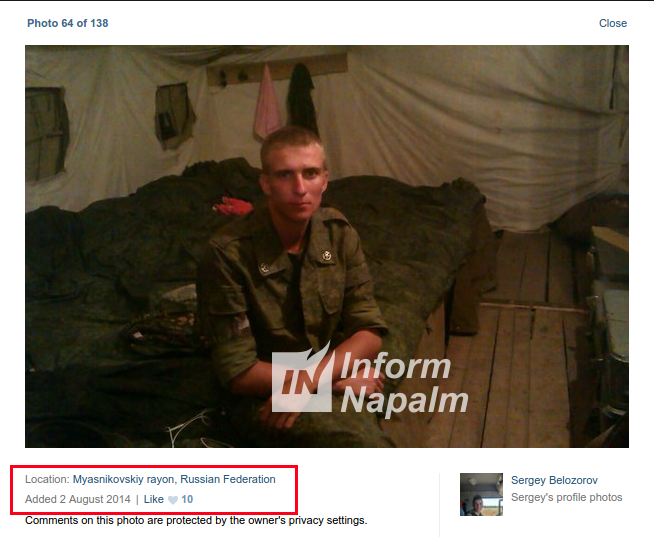 The ‘trick’ with shifting of cloths – we can see here the non-formal uniform without any insignia, the ‘famous’ white arm badges and the ‘Rostov Oblast’ geotag (archive). The similar picture from OK profile – archive. 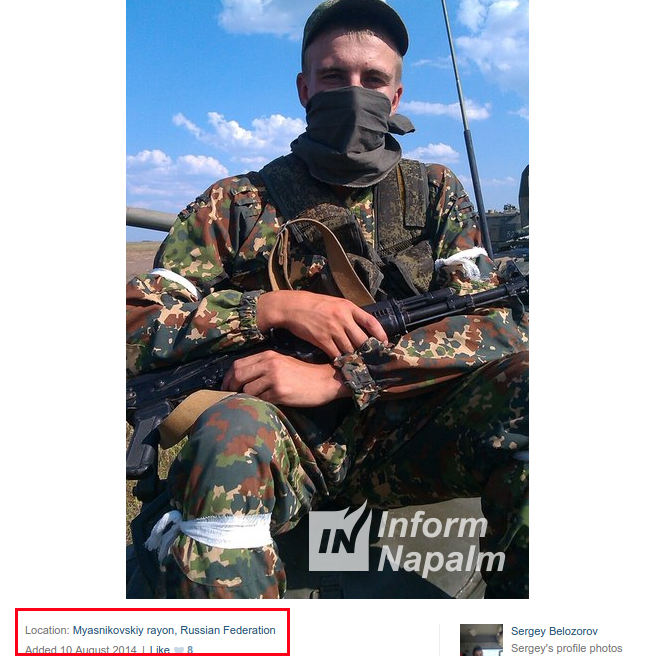 When the outfit was changed and the border was crossed by the battalion tactical group, we can see the following pictures in the album of the Russian terrorist Belozorov: 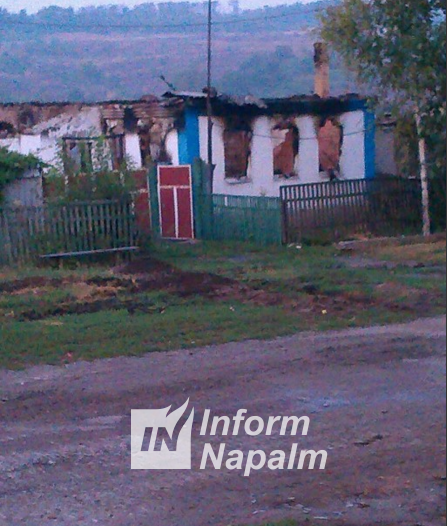 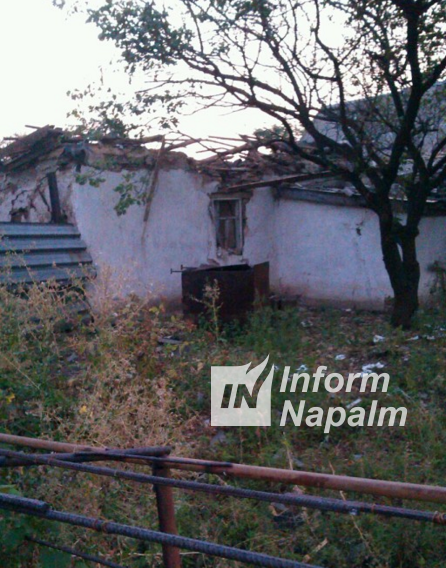 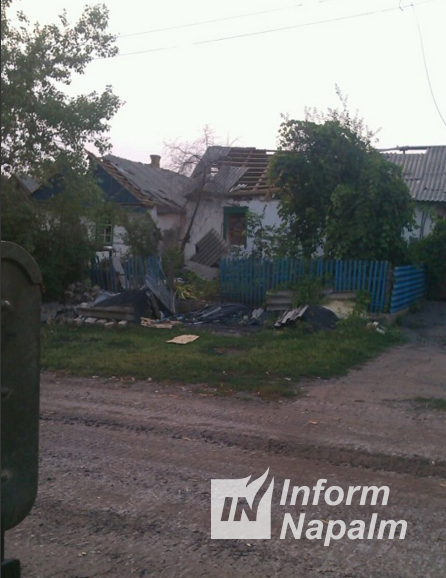 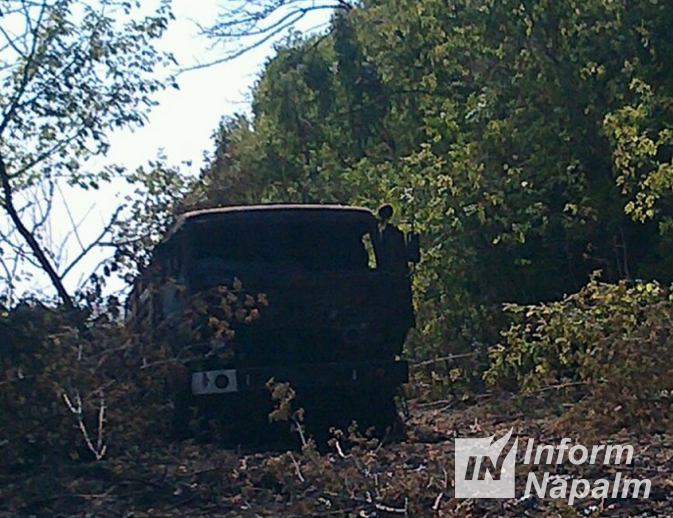 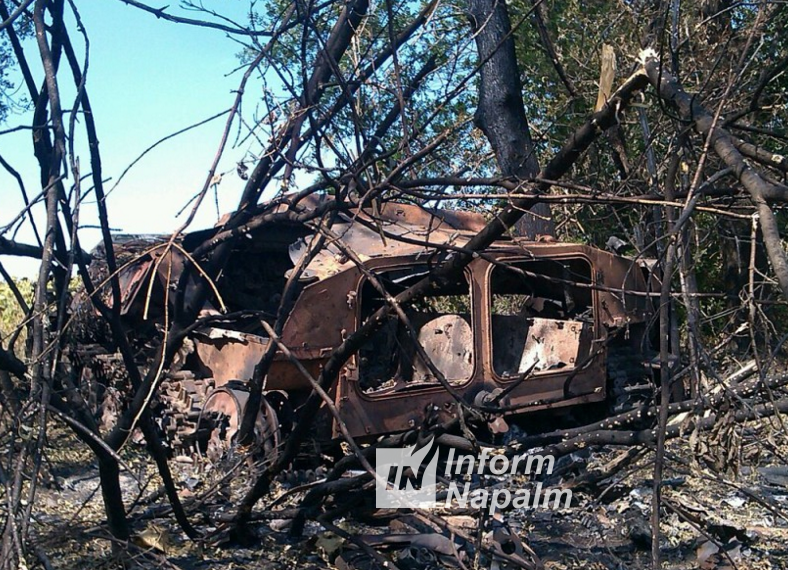 There are no doubts that this is the territory of Ukraine. All the pictures were taken in the end of August, 2014. Belozorov is even smiling while posing in front of our homes and wearing the same informal camouflage outfit. 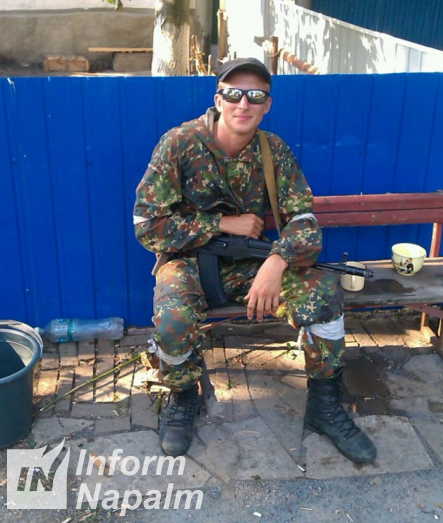 There is another interesting picture of this terrorist from Russia in a trench, again with white badges. The photo is commented:

– what happened to your leg?
– nothing, it is tactical sign. 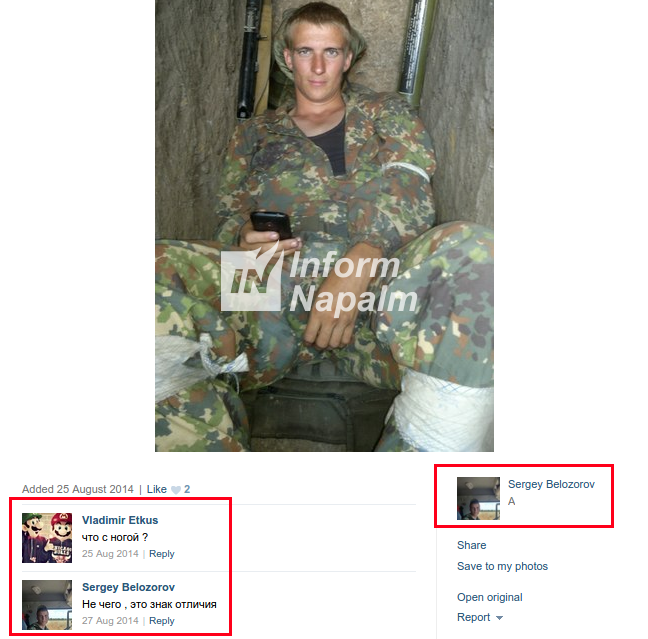 Just to make it clear for the ‘misterious Russian souls’, we will draw an analogy: it would be the same as when the German soldiers invaded the USSR in 1941 and grinningly started to make photos of themselves, burning houses and equipment. Everything is just identical. But, frankly speaking, Germans were not ashamed of their army and wore insignia. 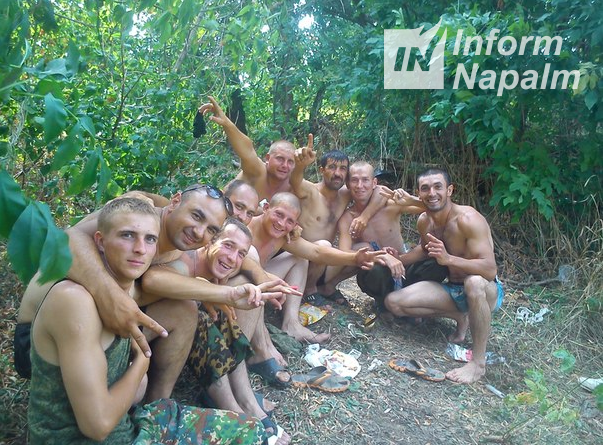 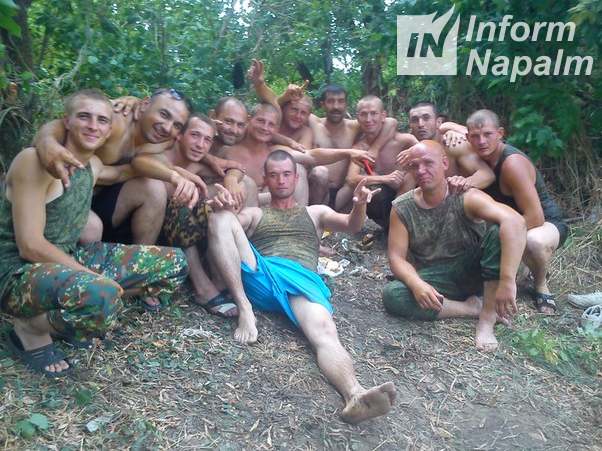 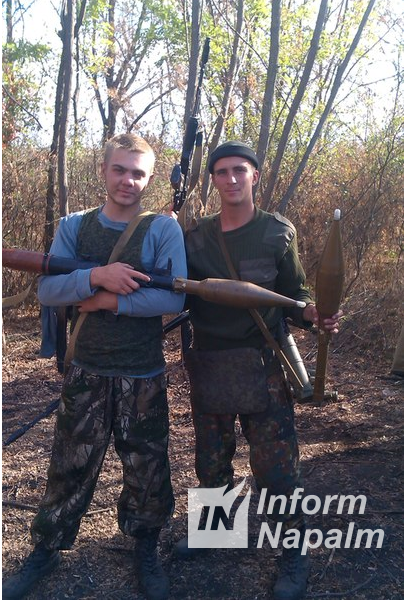 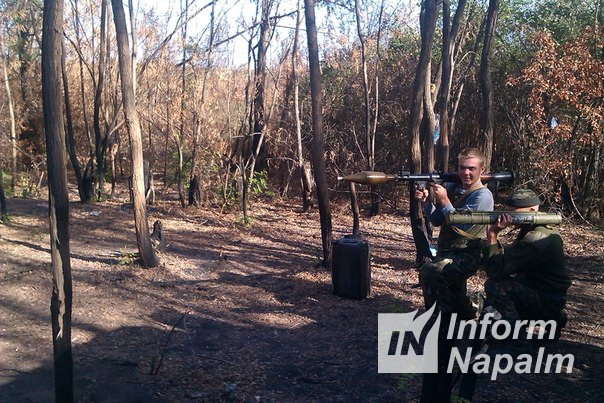 After participating in the combat actions, Belozorov was listed as a serviceman of the 17th brigade at least until February, 2015 (he obviously had a 3-year contract – archive). 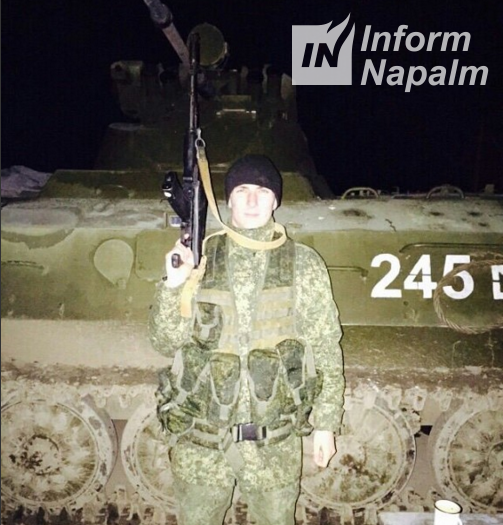 Then he seems to take a short break, but starting from May of 2015 the junior sergeant uploaded several pictures of himself in GRU uniform with traditional red carnation and anchor in the middle (archive 1 and 2). 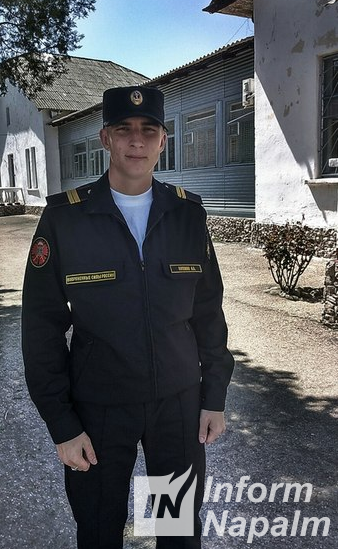 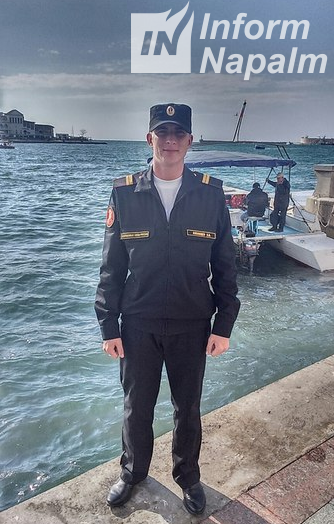 Presumably, the Crimea is one of the so-called Marine intelligence GRU points. Note that each time before taking a photo Belozorov temporarily puts on a Velcro patch with a false lastname (‘Vyazovtsev’, ‘Butenko’, etc.). This is just another confirmation that the sergeant is a professional soldier of the Russian armed forces with a great experience. Another thing is that the offender does not stay long in any of the units, changing his place of service pretty often.

So, here is how another ‘local miner’  and the fighter in the ‘Ukrainian civil war’ appears. Also note that this is not the first time that the terrorists of the 17th brigade are disclosed in Ukraine. And as a finishing touch to the article – a photo from the album, which shows the famous monument for the soldiers from the 17th brigade, the vast majority of whom were killed in August of 2014 under ‘mysterious circumstances’ (archive). 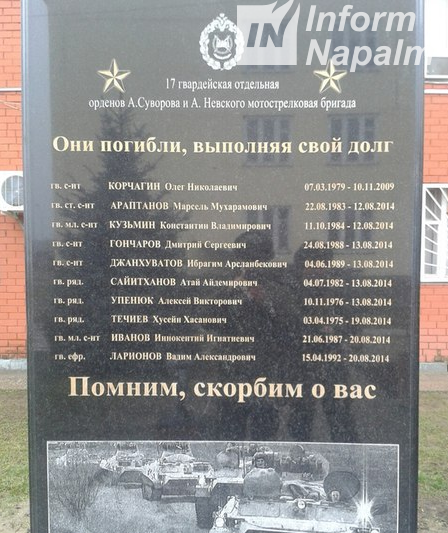 Let us recall that the 17th brigade has been repeatedly registered in Ukraine:

7 Responses to “Another ‘Hybrid Miner’ from the Russian 17th Brigade”