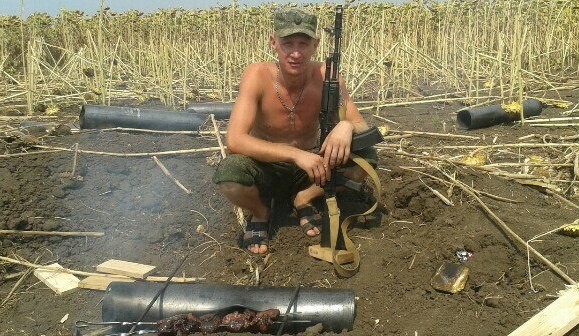 The InformNapalm team continues gathering undeniable facts of the Russian participation in the undeclared war against Ukraine.

We could track the tour of duty of the gunmen of this unit – from their moving out ‘for trainings’ (to Volgograd and Astrakhan Oblasts) in the beginning of summer 2014 till the following assignment to Rostov Oblast and sending to Donbas. The investigation was done based on the analysis of the VK online profile of sergeant Konstantin Nv-Pashinin (archive), a serviceman of the self-propelled mortar division of the 17th brigade. 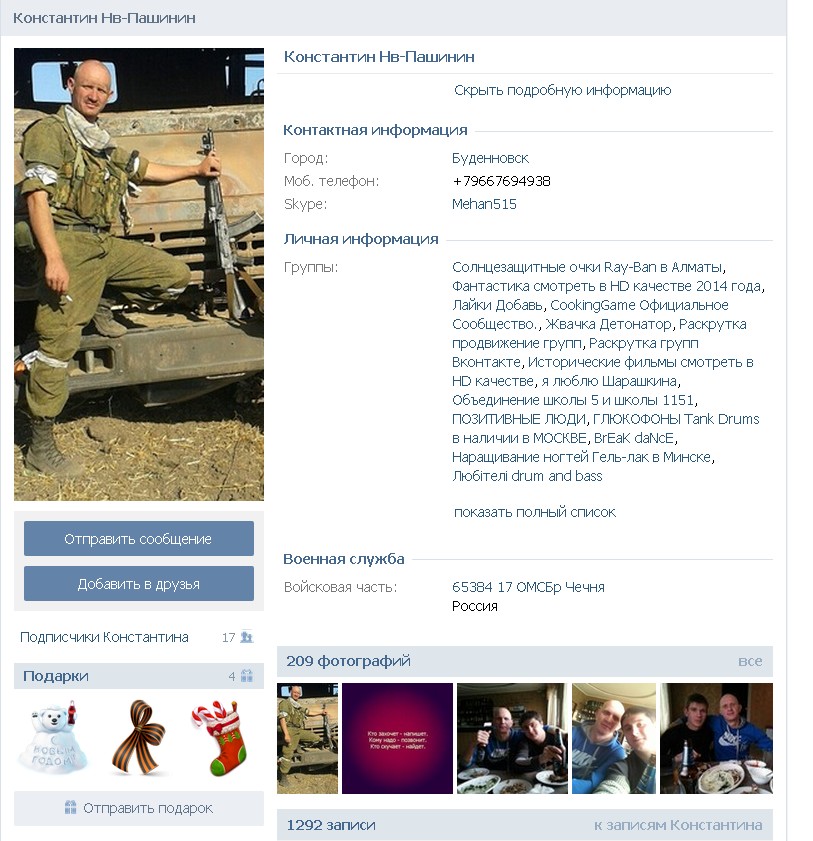 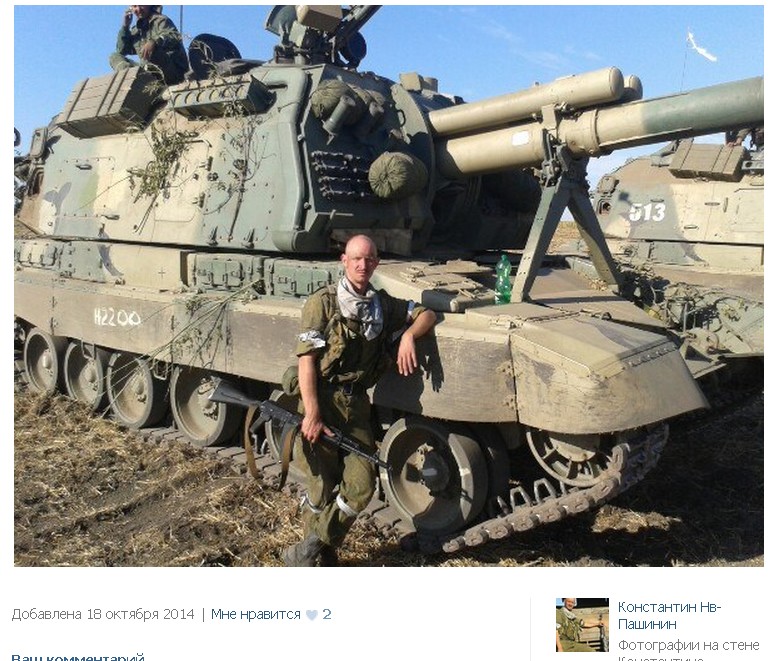 We were able to find both the identity and the location of the military unit. The well-known Russian’s masquerade during which they become ‘Novorossiya fighters’ (informal clothes, white arm bandages, etc) and their equipment masked as the war trophies did not confuse us. Also we identified all the places in Donbas where this Chechnya artillery unit had acted, and all of them are linked to specific objects and terrain. In particular, as for the beginning of fall 2014, the self-propelled mortars of the 17th brigade were located near the Novoazovsk windfarm.

Please check this out in details: 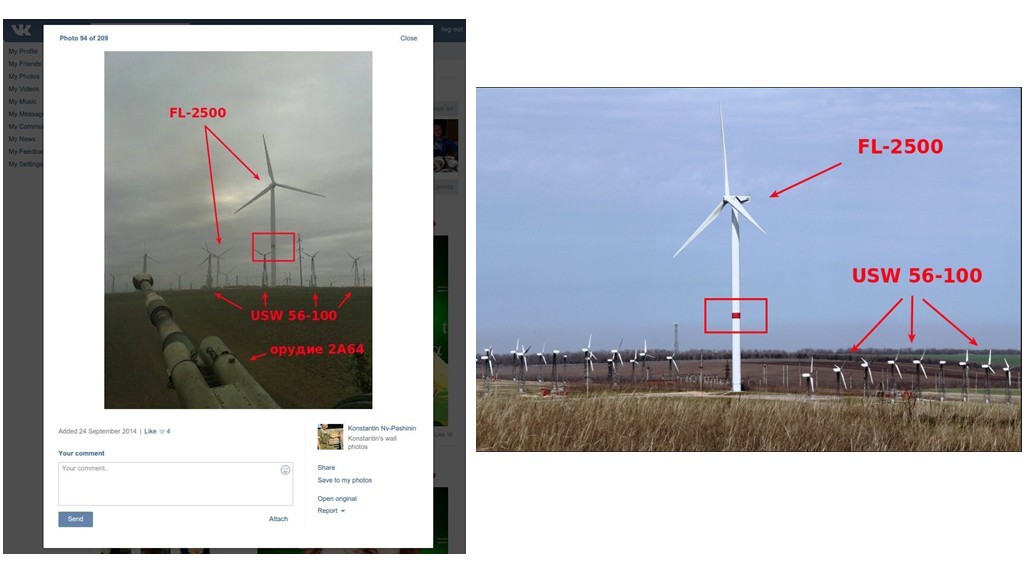 Despite the pictures in the sergeant’s photo album (archive) were uploaded randomly we still were able to find the chronology of his Rostov-Ukraine trip and some other important details. It was done thanks to this data and the information from other open sources (a set of YouTube video clips):

– In June 2014, the artillery units of the 17th brigade from Chechnya were noticed in Volgograd and Astrakhan Oblasts, at the Prudboy and Ashuluk training sites where they are prepared for the assignment

Note: to ensure that the equipment from the videos belongs to the 17th brigade you just need to compare its camouflage with the equipment from the pictures of the 17th brigade serviceman K. Nv-Pashinin – they are the same. Also analyzing the video you will notice that one of the mortars has its hull number painted over with 2 types of paint – green and yellow one. Noteworthy is that the mortar No. 524 from the album photo has ’52’ on the green background and ‘4’ on the yellow one.

– on September 4, 2014, the self-propelled mortar with the same camouflage was seen in Novoazovsk (‘Al Jazeera’ report “Ukraine rebels advance towards Mariupol“), but now the typical place of the hull number is painted out. Here we have two options: either this is not the ‘524’ vehicle or is it, but another layer of the paint was added to mask the number.

Note: We should pay attention to several details – the white flags tied to the mortars’ antennas (seen at 0:12-0:20), which you can also see in Nv-Pashinin’s pictures, as well as the white identification circles on the supply automobiles cabins (see video of the fuel truck, 0:10). 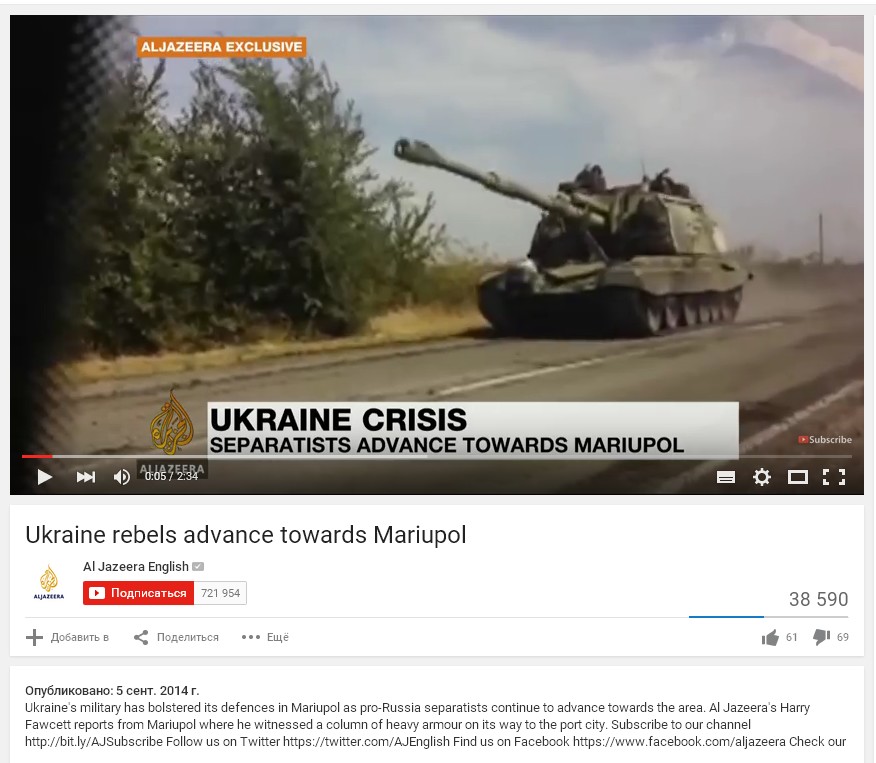 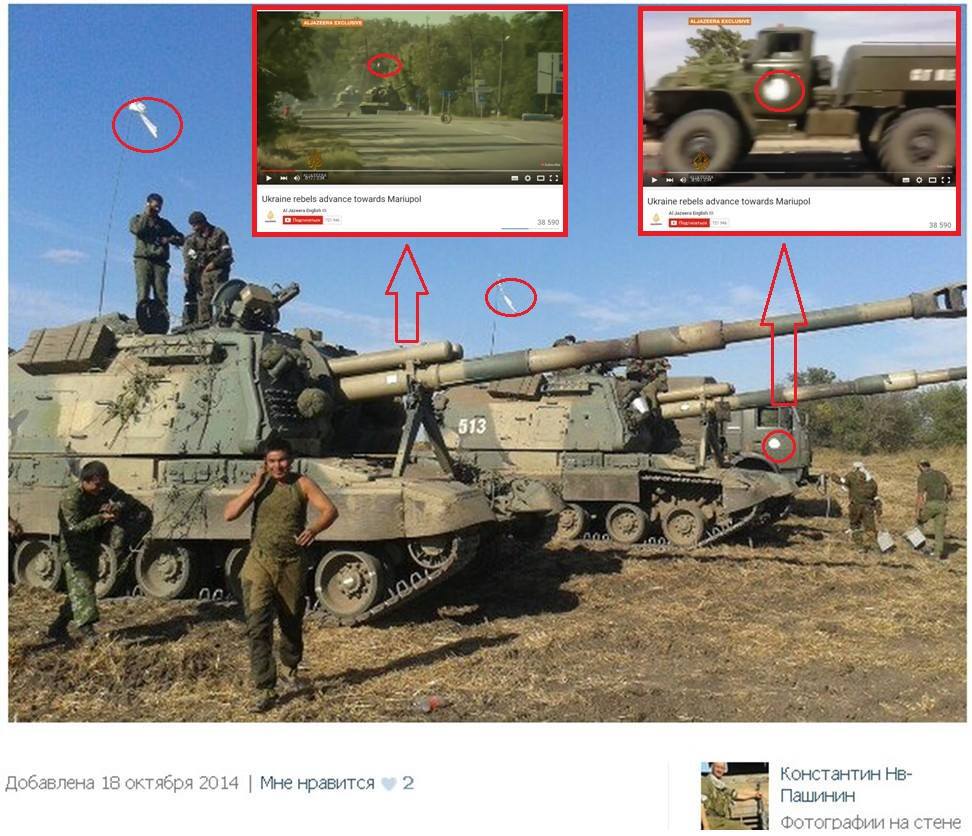 – at last, on September 24, 2014, our future ‘Hague hero’ K. Nv-Pashinin uploaded the pictures of ‘Msta-S’ mortar in front of the wind field of the Novoazovsk windfarm. The photos were made around the end of August, 2014. Thanks to this object we identified the exact place where the photo was taken. 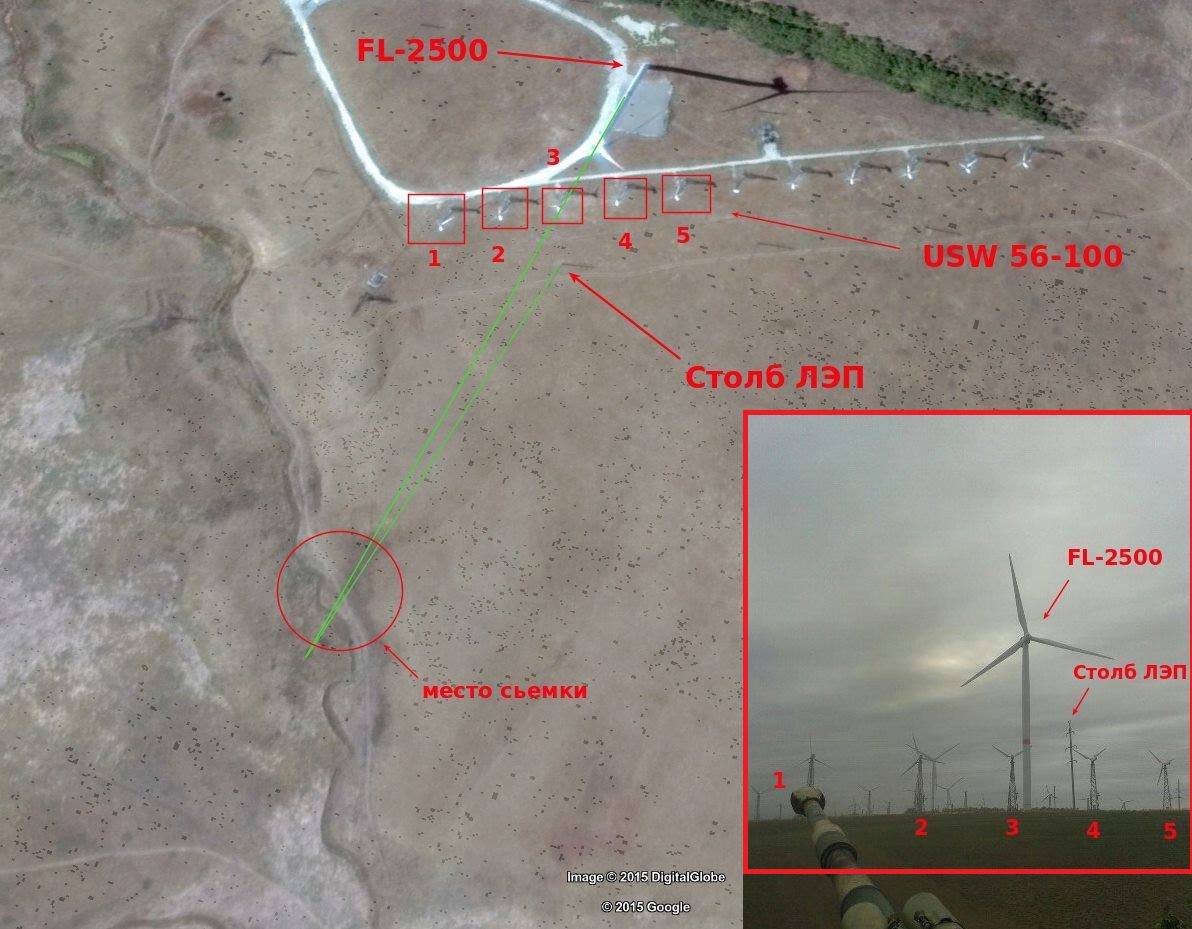 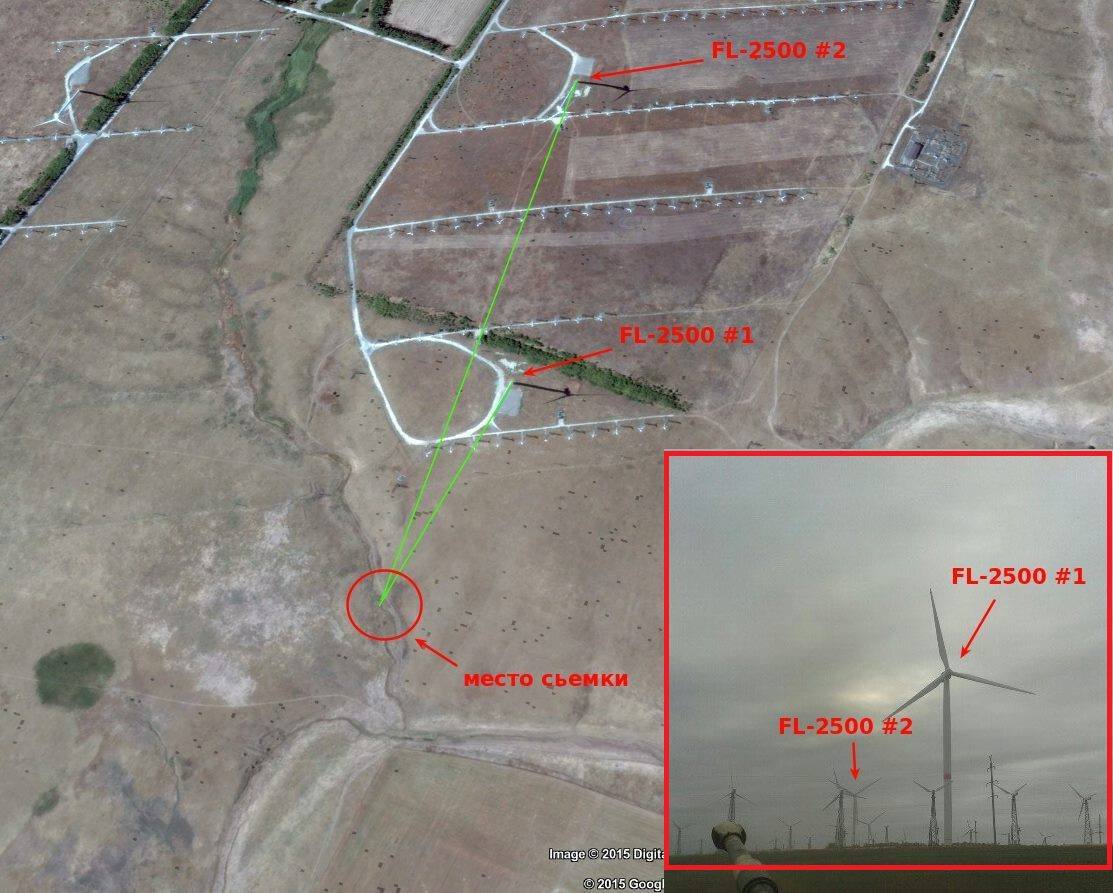 Looking through the list of contacts of K. Nv-Pashinin (archive) you can find other gunmen of the 17th brigade, who also have been assigned to Ukraine. For example, Pavel Kravchenko (VK profile, archive). He does not have much photos in his album, but still there are a couple of them that come from the same series as Nv-Pashinin’s ones: a brazier made of shells and a medal of Valor, generously given by the Russian Ministry of Defense to the ‘Donbas veterans’. 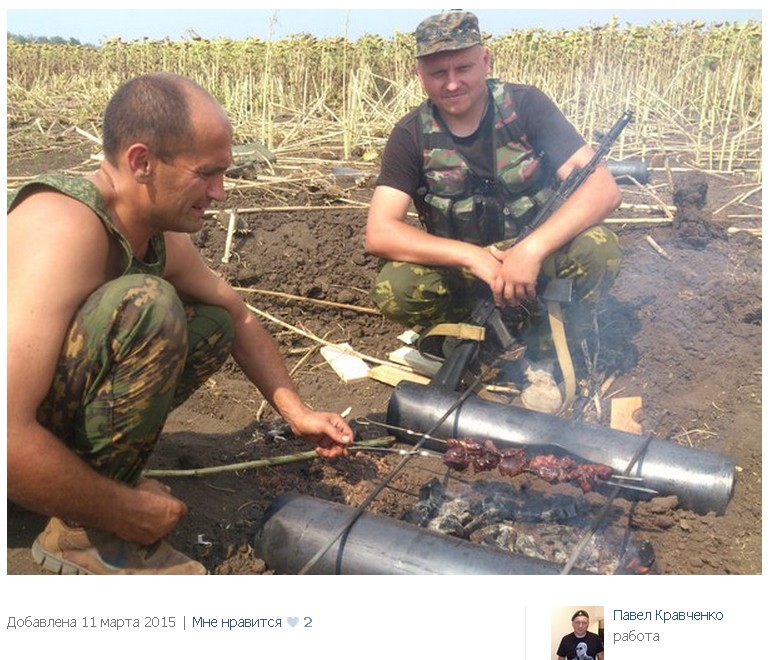 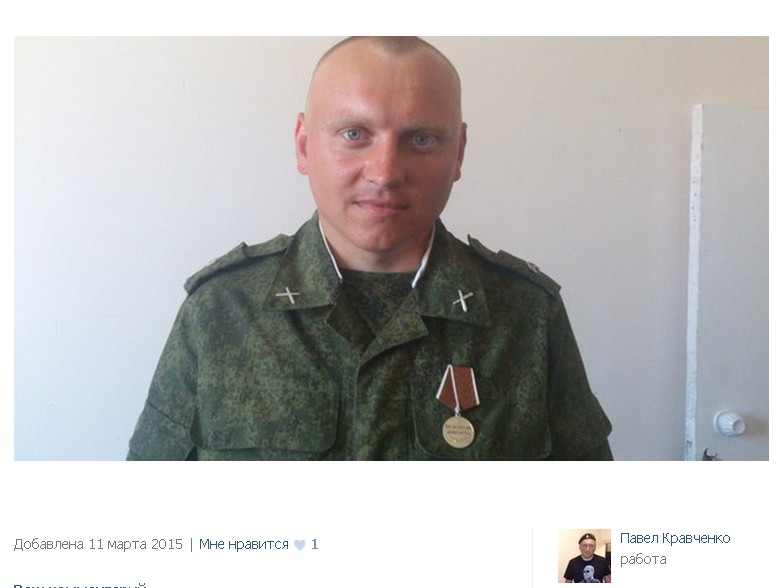 Let us remind you that the 17th brigade has become the ‘hero’ of several our stories:

– “Tankman”: Russian Officer of the 17th Independent Motor-Rifle Brigade Who Participated in Armed Hostilities in Donbas