Runaway Ukrainian Berkut fighters in the Police Service of Belarus 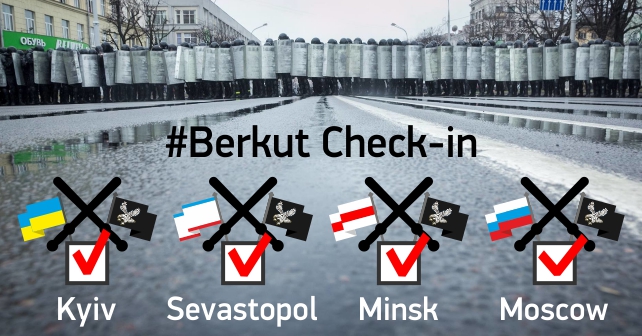 The Belarusian editorial team of InformNapalm received a tip-off that former Ukrainian policemen of the disbanded Berkut riot police unit implicated in unlawful actions against the participants of the Revolution of Dignity, are hiding not only in Russia and occupied Crimea, but also in the Republic of Belarus. InformNapalm OSINT teams proved this information.

It was established that authorities of Belarus, like their Russian colleagues, not only granted political asylum to the ex-officers of the Ukrainian Berkut, but also willingly took them to serve with Belarusian police. Judging from the recent events, we can see that both Russia and Belarus appreciated the experience of the violent crackdown on the peaceful protests gained by the Ukrainian runaway riot police officers.

Our new OSINT investigation dealing with the former Berkut officer from Mykolaiv, that participated in Maidan clashes in 2013 – 2014 and fled to Belarus after the Revolution of Dignity. Being the direct participant of the Revolution of Dignity, the author of this investigation takes it as the tribute to all the people who died at the hands of the riot police and other security officers.

The first subject of this investigation is Mykola Storgnyak, a former Berkut riot policeman. About him, the most information was from the open sources. 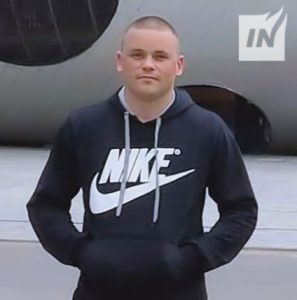 Although Stogornyak has been very cautious on social media (he deleted the previous account, which showed his participation in the Berkut public support group together with all the personal pictures), we managed to collect enough information for his identification by searching through the pages belonging to his relatives and former colleagues.

We found in his sister’s profile a picture of Stogornyak taken with his mother visiting him in Minsk in November 2016 after a long parting. The picture was taken on the observation deck on the National Library of Republic of Belarus. 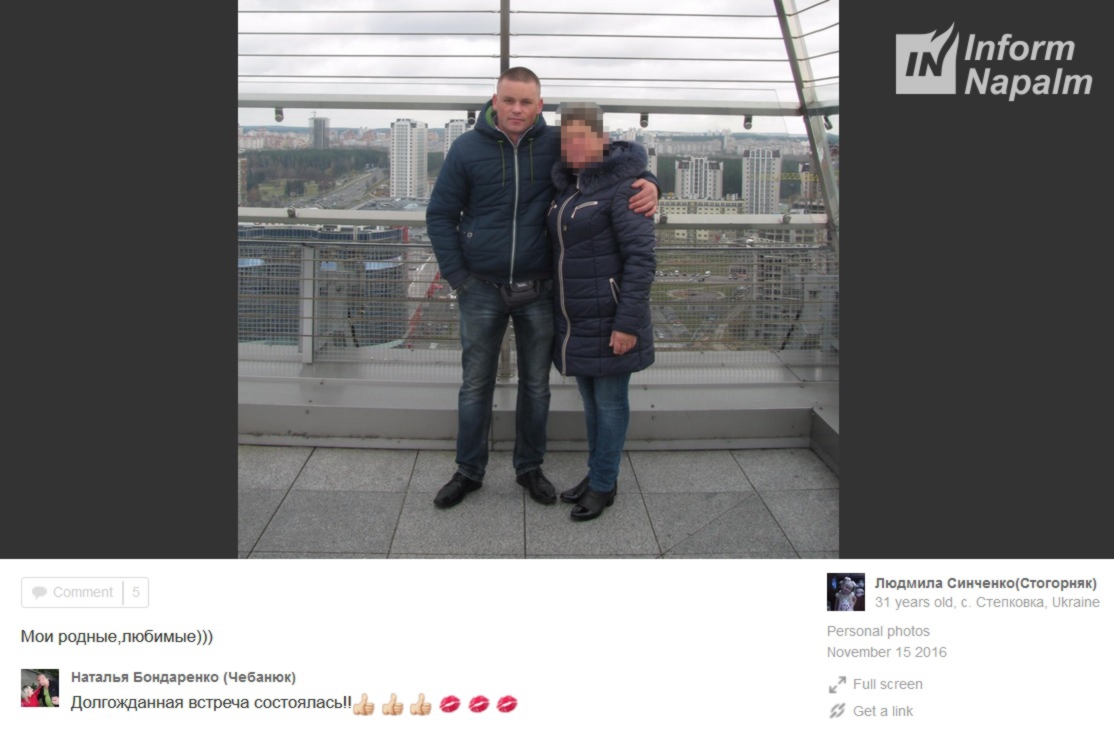 The picture below, is one those deleted by Stogornyak, it was taken in front of the high-tech Borisov Arena football stadium in Barysaw, Belarus. 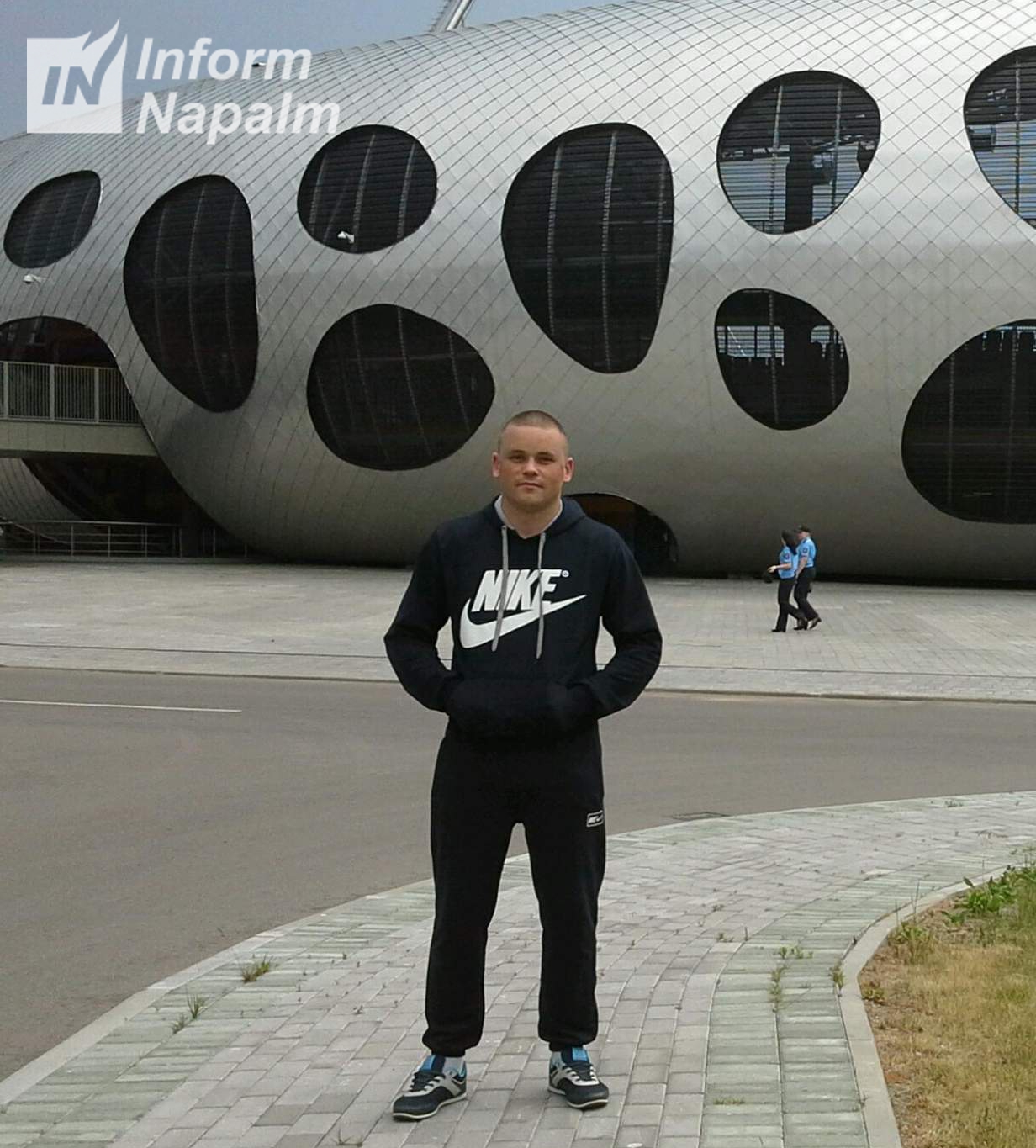 While searching for evidence of Stogornyak’s service with Berkut, we came across a group photo showing him together with his colleagues presumably in the town of Pervomaisk. The group are wearing Berkut uniforms, Stogornyak’s has shoulder marks of a sergeant. 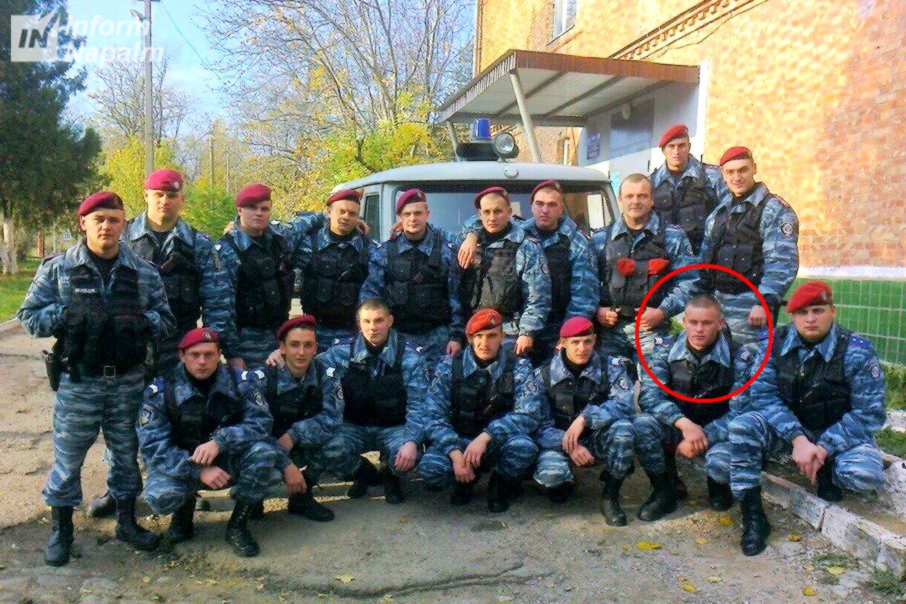 Stogornyak is the second from the right in the first line.

During his service with the Belarus police, Stogornyak already took part in violent detentions and persecution of the public activists of Belarus. On March 13, 2017 Stogornyak was the witness on the trial of the public activist Vyacheslav Kosinerov accused of participation in the march against a Soviet-style “tax on spongers” in Minsk on February 17, 2017. Stogornyak committed perjury telling that he could recognize Kosinerov in the dark by his eyes among other couple of thousands of protestors but could not tell the name and surname of the defendant. In spite of the obviously false accusations, Kosinerov was sentenced to 15 days in prison. The fact that the former Berkut sergeant Mykola Stogornyak is serving with the Belorussian police is confirmed by documentary evidence – a photocopy of a judgement in the administrative offence No. 1009/17 of March 13, 2017. 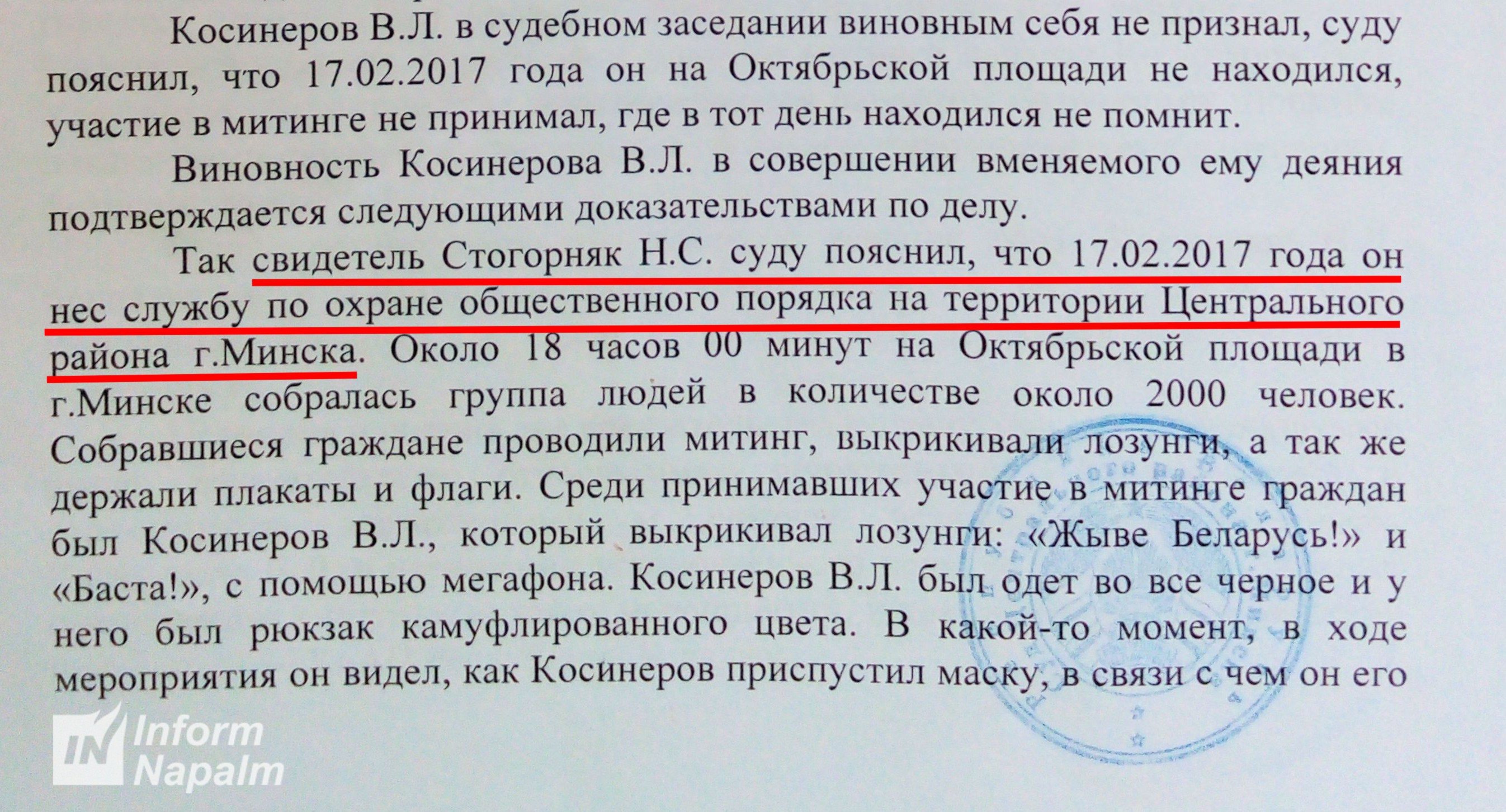 Fragments of a photocopy of the judgement in the case of V. Kosinerov

Few days later, on March 16, 2017, Stogornyak witnessed as the OMON officer (Belorussian riot police special force) in the case of Dmitri Mitrashevskiy, whom he detained the day before, right after the protest march. Mitrashevskiy was also sentenced to 15 days in prison [1, 2]. This incident, when the detaining law enforcement officer and the witness in the case are one and the same person, shows the efficient routine of the repressive apparatus of Belarus. 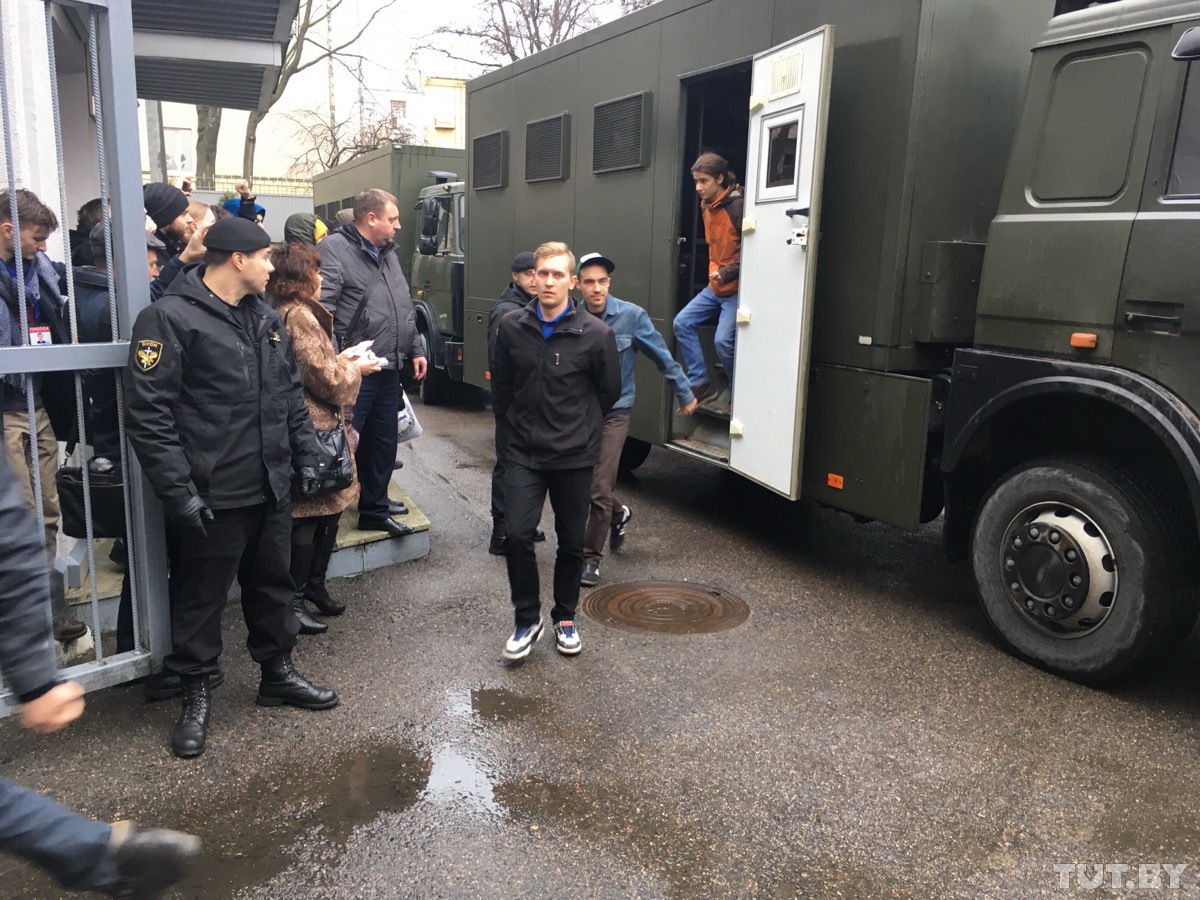 Convoy of the detainees to the court of the Central District of Minsk, March 16, 2017

Stogornyak openly perjures in court, but at the same time he himself fled from a prosecution in his own homeland. His criminal story can be probably traced from the events of November 2012 when a voting station in Pervomaisk, Mykolaiv oblast during Ukrainian parlamentary election was stormed by Berkut servicemen who stole the original ballots. These actions contribute to the vote rigging in favor of the Party of Regions possible [1, 2, 3]. 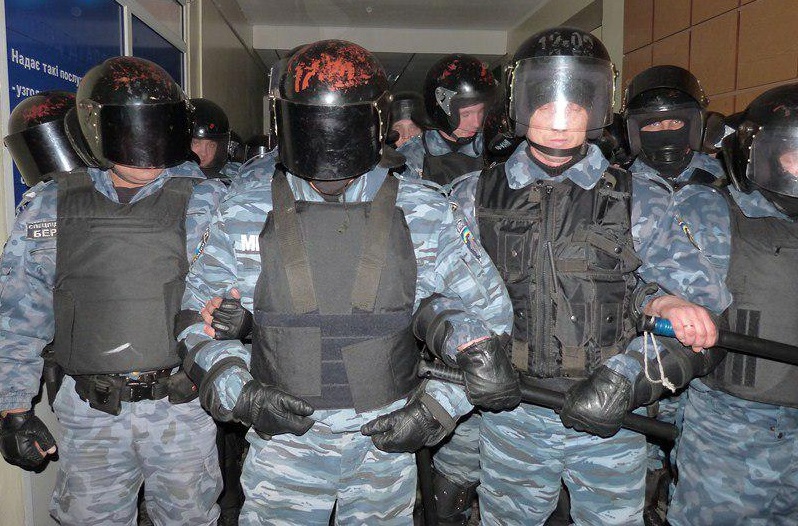 Berkut policemen in the building of the 132th District election Commission of Pervomaisk | © nikvesti.com

We presume that Sergiy Gavrilyak, the second subject of the investigation is also in Belarus and is serving in law enforcement agnecies. He was found on the friend list of Stogornyak. But Gavrilyak is even more secretive on social networks. Nevertheless we found some details about him. 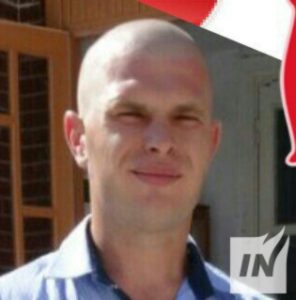 Sergiy Mykolayovych Gavrilyak, born on Febuary 02,1984, in Zelene village, Mykolaiv oblast, Ukraine. Got employed with Berkut in Mykolaiv oblast after the conscript military service. In November 2013 was sent to Kyiv with the Mykolaiv unit of Berkut. Accounts on social networks: VK (archived profile, photos, contacts).

After a profound study of the open sources, we could establish that Gavrilyak took part in the Maidan standoff as part of the infamous Berkut force. It is also evidenced by his own comments to the post about the request for asylum in occupied Crimea made by the 25 officers of the Kharkiv Berkut unit (archive). He is regretting that he and his colleagues did not turn against Yanukovych who fled Ukraine and apparently betrayed his faithful Berkut.

In another comment Gavrilyak threatens Maidan protesters that he would once be back in Ukraine and would spit into their battered faces (archive). Apparently, he hates them with even more passion than the fugitive president toppled by them.

And then in another comment, Gavrilyak goes on regretting that Russia did not invade Mykolaiv (archive).

Indirect evidence strongly suggests that Gavrilyak is hiding in Belarus, e.g. his wife Tetyana Gavrilyak (archived profile, photos, contacts) now lives together with her children in Minsk. Apparently, Tetyana fervently supports her husband’s views and nostalgia, as she posted the symbol of the disbanded Berkut in all her social network accounts on the unit’s anniversary [1, 2]. 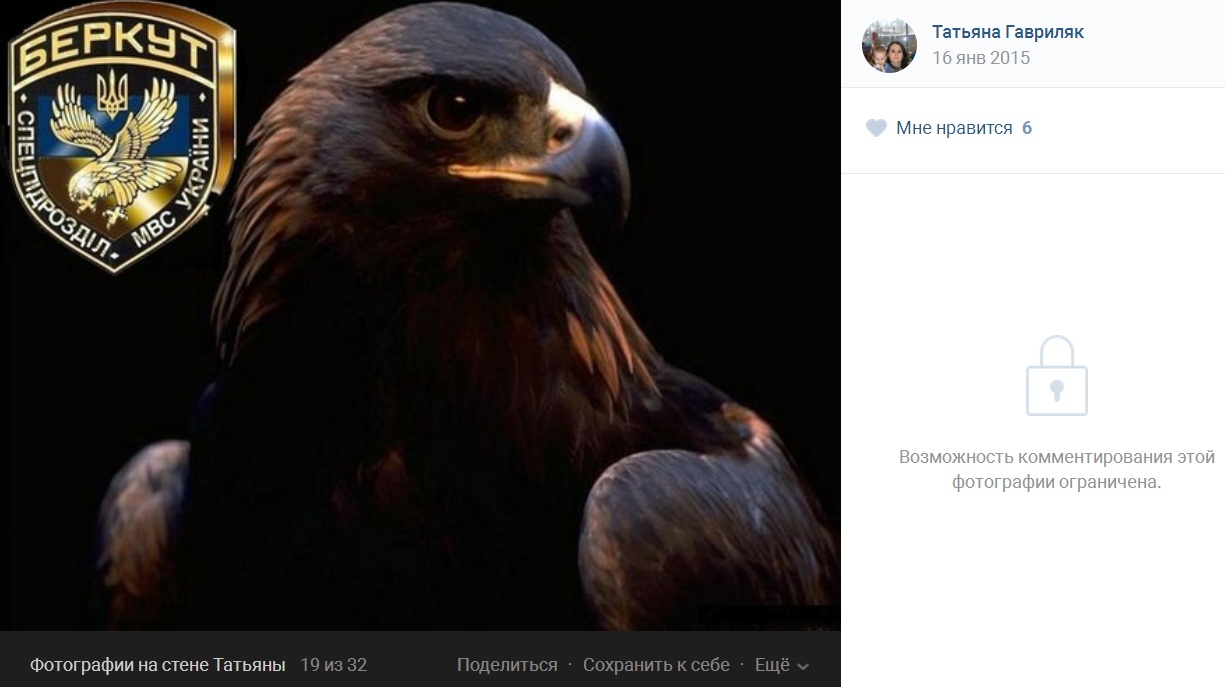 We also found out that Tetyana Gavrilyak got the job of preschool teacher’s assistant in one of the nursery schools in Minsk.

For the purposes of identification, here is a higher-resolution picture of Gavrilyak taken in 2011. 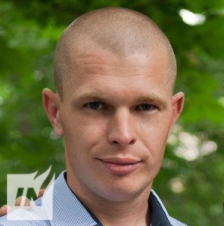 The third subject of this investigation is the colleague of Stogornyak and Gavrilyak who served in Mykolaiv unit of Berkut – Sergiy Panasenko. It proved the hardest to find any information on him, because Panasenko deleted almost everything about himself from the social media before fleeing to Belarus. We found his new nicknamed account after a thorough analysis of the accounts of his ex-colleagues. 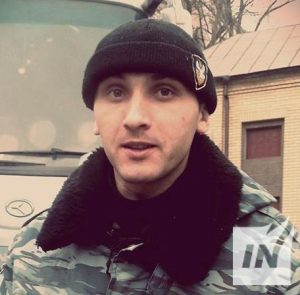 Panasenko Sergiy, born on February 1, presumably in Berezan district of Mykolaiv oblast. We are working on establishing his birth year and final authentication of his surname. Got employed with Berkut in Mykolaiv oblast after the conscript military service. In November 2013 was sent to Kyiv with the Mykolaiv unit of Berkut. Apparently, this is his new social media profile on VK (archive profile, contacts). We found this profile among the contacts of almost all of his colleagues, and in the profile of Gavrilyak it is marked as the best friend.

Social media accounts of his relatives proved more informative, there we found not only the data about his participation in Maidan standoff during the Revolution of Dignity, but also about his being in Belarus. The accounts of Panasenko’s sister Elena Bondarenko (1, 2), became our main source of information.

On the pictures below (1, 2, 3) Panasenko was taken in November 27,2013, two days before the first violent crackdown on Maidan protesters on the night of November 30. 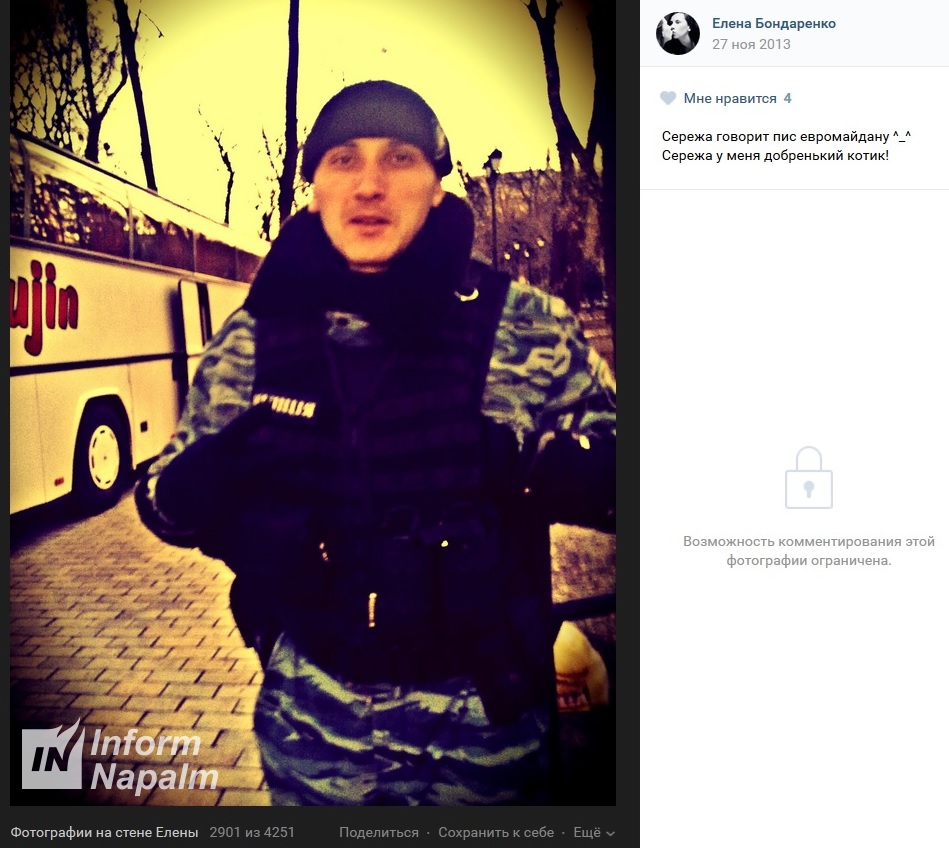 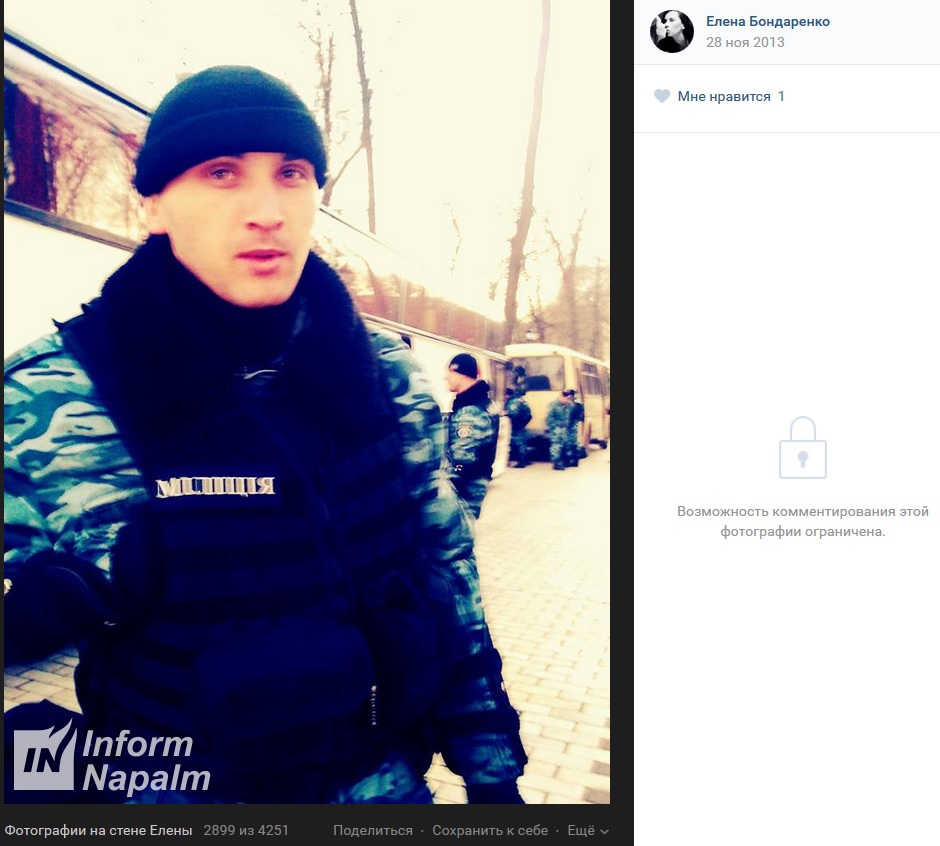 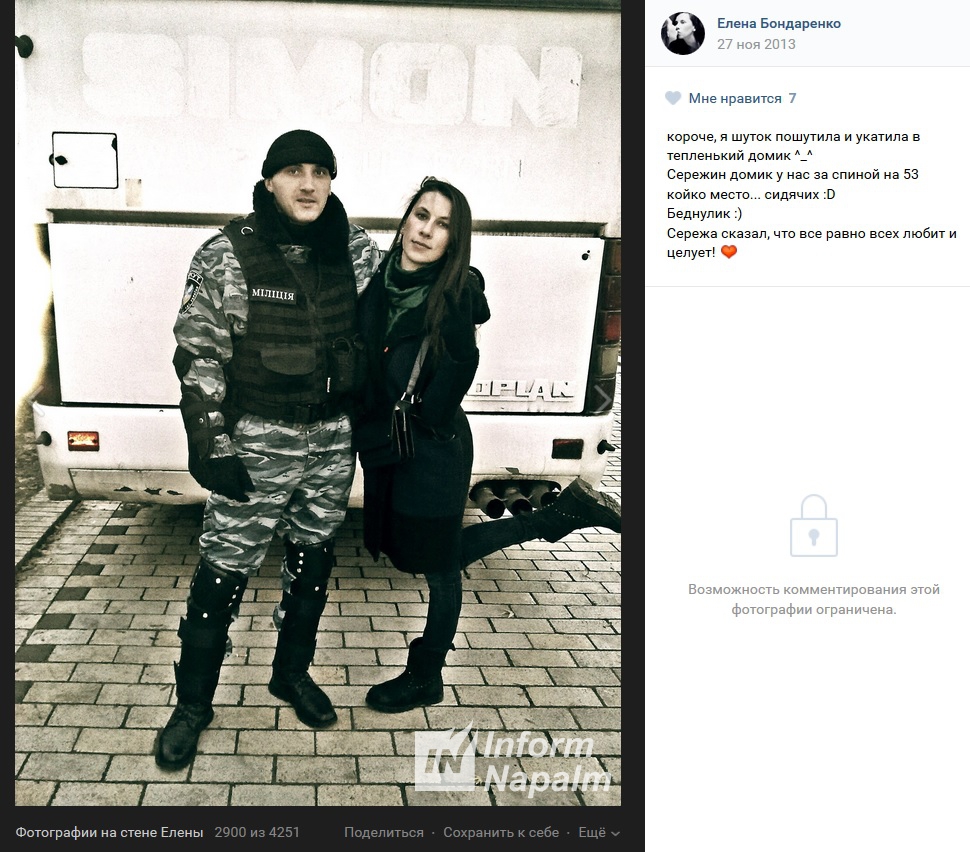 Bondarenko’s emotional posts about her brother lead us to the conclusion that Panasenko participated in guarding of the President’s Administration of Yanukovich on Bankova street in Kyiv and of his Mezhyhirya Residence [1, 2]. 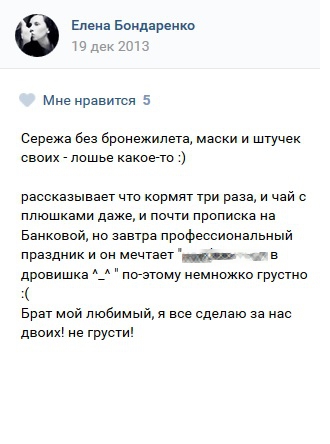 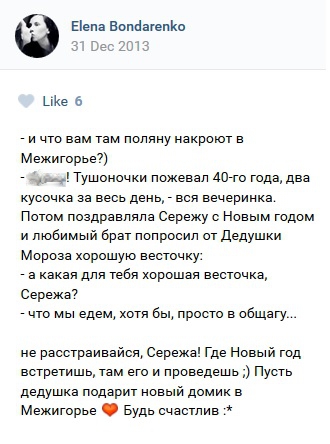 On October 3, 2015, Bondarenko wrote about a visit to Minsk, Belarus along with her friend to see Panasenko after a long time of being apart. 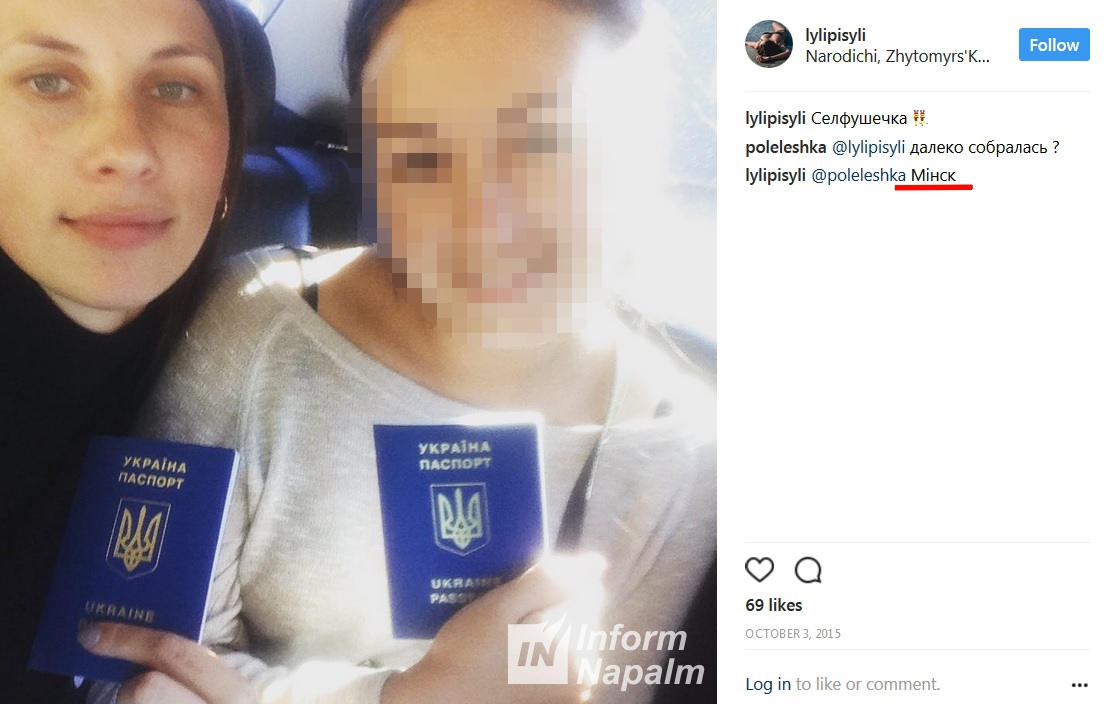 Selfie sticks played a role in this investigation. Here are selfies with Panasenko taken in the middle of Minsk on the October Square, on Svislach embankment and near Trinity Suburb (Trojeckaje Pradmiescie). 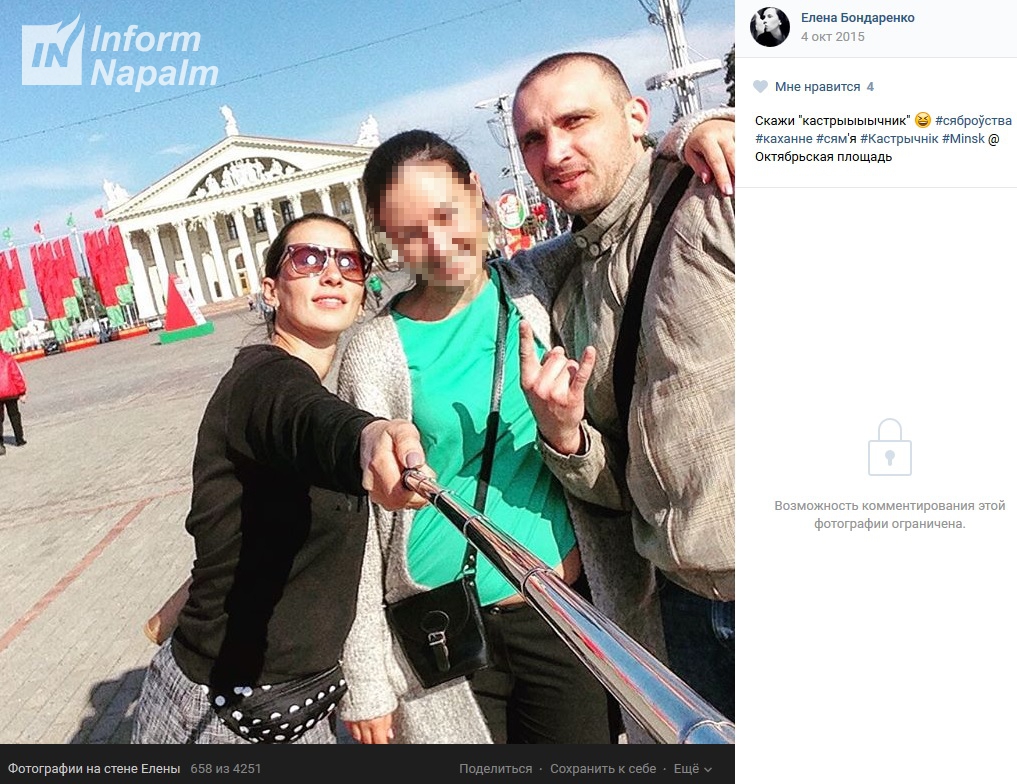 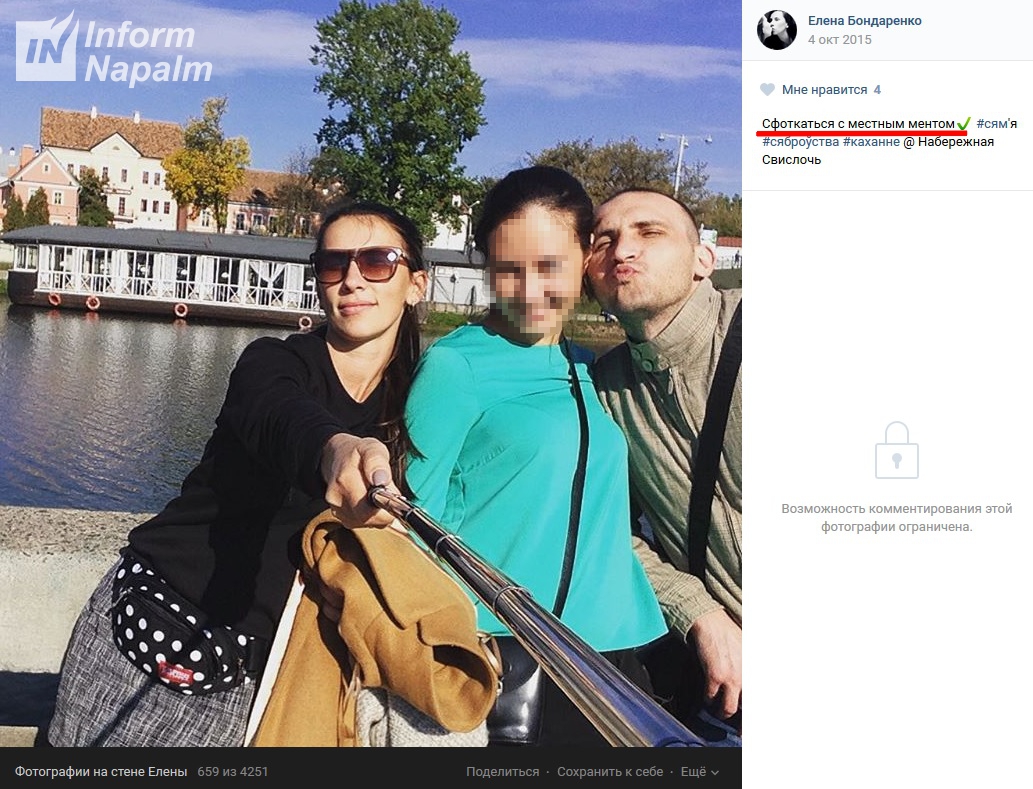 Bondarenko captioned one of the pictures as “a photo with a local cop”. Apparently, local police is in need of personnel with experience of protecting unconstitutional regimes. It is likely that subjects of the investigation could participate in the crackdown of the peaceful rally on Freedom Day, Mach 25, 2017 in Minsk.

What made them flee Ukraine in haste, leave their homes and relatives? Apparently, there are implications of crimes like abuse and torture or even killing of the Maidan protesters.

The author of this feature is a participant of the clashes on Grushevskogo street in January, 2014 and can personally testify about illegal actions of the Berkut policemen. They used Molotov cocktails against the protesters, shot directly at their eyes, used hunting and armor-piercing ammunition in their pump-action guns instead of rubber bullets. They attached metal elements to stun grenades and threw them into the crowd causing mass grave injuries. 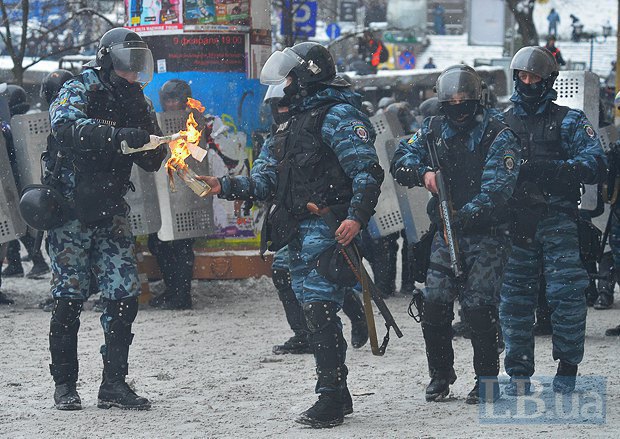 In this investigation, we dealt only with former officers of the Mykolaiv unit of Berkut that participated in Maidan clashes during the Revolution of Dignity. We found a document proving that one of the subjects is on active service with the police of Belarus. For another one, we have an indirect testimony from a close relative about his being employed by Belarus police. Lukashenko’s regime could have given asylum to dozens of former Berkut policemen. It is important to reveal and spread information about their being on duty with the police forces of Belaus. They could be used for the dirty work in crackdown on the peaceful demonstrations. It is very important to prevent of the appearance of the death squads in Belarus.

We should like to draw the attention of the competent authorities of Ukraine to the subjects of this investigation, and if it is applicable to initiate the extradition procedure.

InformNapalm showed in a number of publications that Belorussian authorities not only grant asylum to LPR/DPR terrorists and their supporters, but also actively use the topic of refugees for media manipulations against Ukraine. Taking the runaway Berkut policemen for active service in police forces of Belarus makes Belarussian authorities complicit in the crimes committed by the Yanukovych regime against Maidan protesters.

By Dzianis Ivashin, the editor of Belarusian service of InformNapalm volunteer intelligence community.

(CC BY) Information specially prepared for InformNapalm.org site, an active link to the authors and our project is obligatory for any reprint or further use of the material. Translated by Eugenia Zlamanuk, edited by Artem Velichko