Russia’s Air Forces: from Setting Up Provocations in Ukraine to Cargo Delivering to Syria 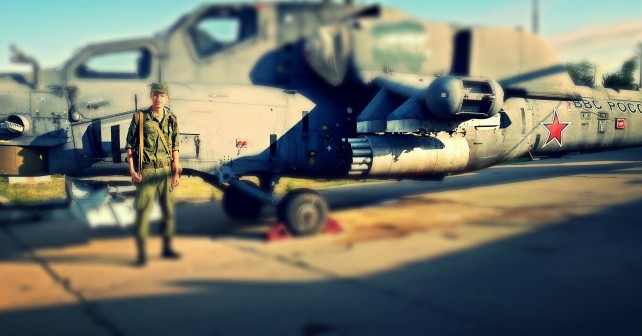 Investigating profiles of the Russian servicemen, the international volunteer group InformNapalm.org disclosed several facts about Russia’s air forces’ preparations for possible provocations with the usage of striking aviation. Also the airdrome used for weapons transfering to Syria was found.

The volunteers noticed several distinctive features on the photos of Mi-28N ‘Night Hunter’ helicopter, uploaded by Petr Gordienko (archive), a serviceman of the 1st guards mixed aviation division of the fighter regiment (military unit No. 75386, Krymsk, Krasnodar krai, Russia). Despite the applied blur effect, we could spot the following:

Here are a couple of pictures of Mi-28N helicopter with standard marks for comparison. 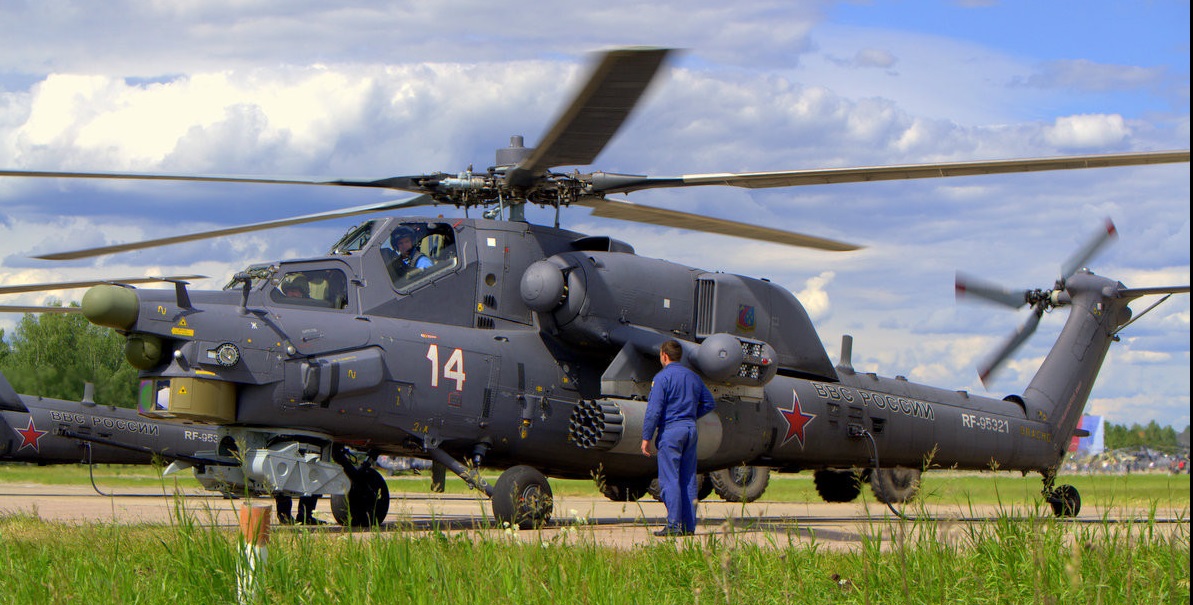 The base military airdrome Krymsk (the size of the flight landing strip is 3000 x 60 m) is located on the Northern edge of the town. It is noteworthy that this airfield is the largest one in Krasnodar krai and is now used as transshipment point for the aviation’s Syrian assignments. An-124 and Il-76 transport aircrafts take off from this base heading Syria. Monitoring and analyzing the radio communication, the call sign of the Russian air base in Latakia (Latakia Bassel Al-Assad International Airport) was determinated – ‘POROG‘ [doorstep].

The pictures found in the social profile of Ibraim Abdakirov (archive), another Russian serviceman, are also of interest. 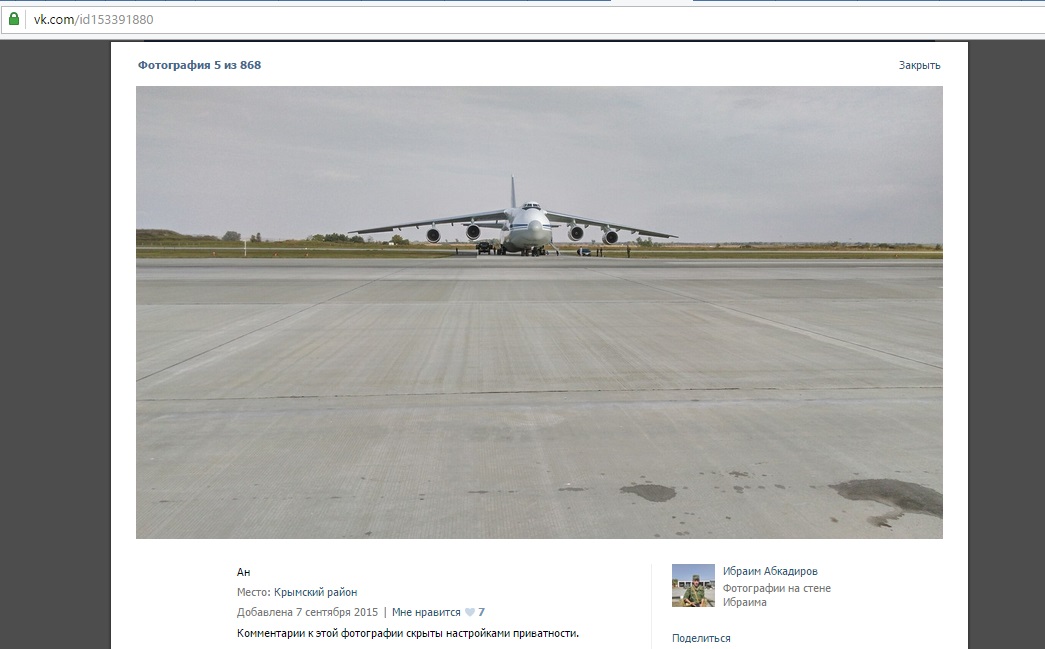 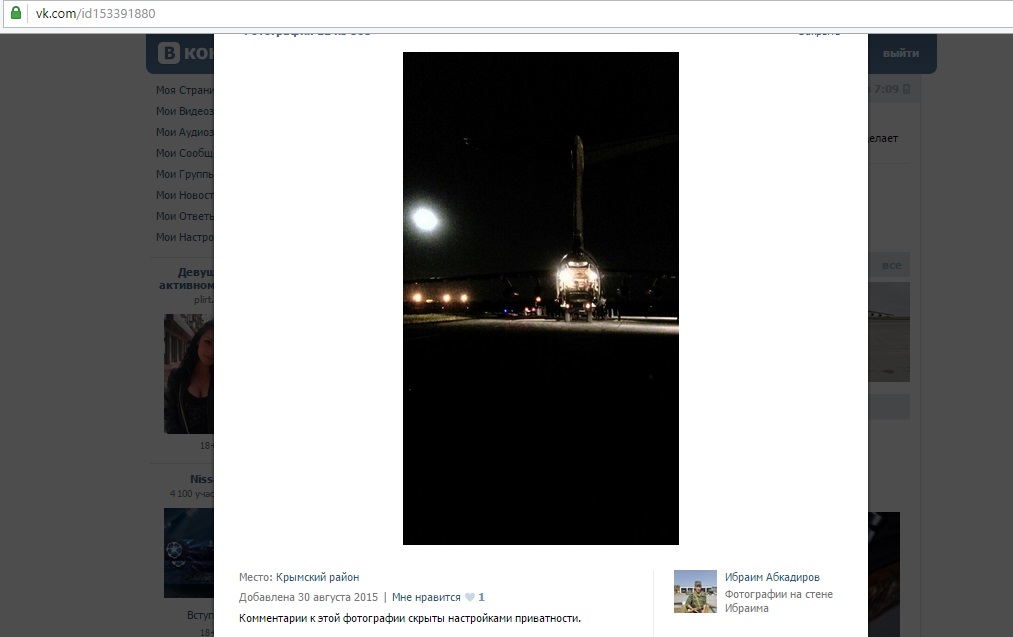 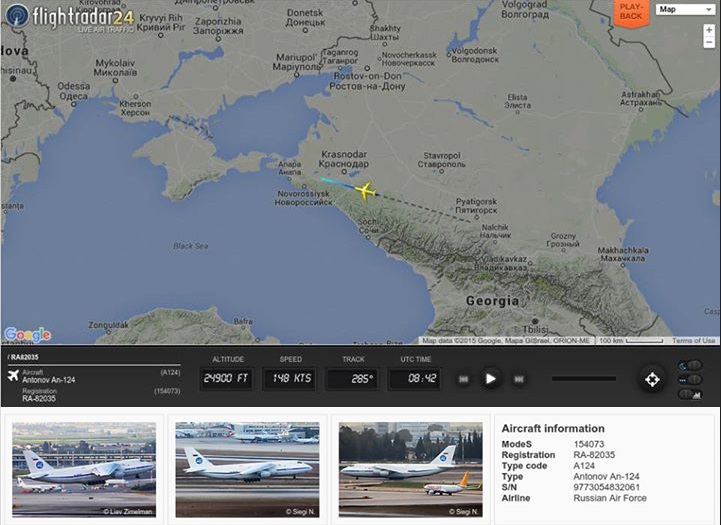 Based on the data from Flightradar24 service the InformNapalm team registered a number of recent flights of the Russian An-124.

An-124 (tail No. RA-82035, military transport aviation of Russia’s air forces) returned from Syria to Krymsk on September 23.

An-124 (tail No. RA-82039) left Gelendzhik airport heading towards Syria on September 24, and came back to Krymsk on September 25.

The radio communication interceptions of various flights of the Russian aircrafts to Syria and back can be found in the internet.

You can estimate the quantity of the military cargoes transferred by Russia to Syria based on the numerous videos with the Russian weaponry and equipment. For example, one An-124 military transport aircraft can take up to 3 Su-25 ‘Grach’ [Rook] strike fighters or 2 Su-30 multirole fighters. By the way, the recent satellite pictures published by the US private reconnaissance company ‘Stratfor’ showed exactly these types of the Russian aircrafts in Latakia airport. In our turn, InformNapalm’s experts assumed, with a high degree of probability, that at least one of the aircrafts was in service of the Russian army. In particular, it belonged to the 120th mixed aviation regiment of the 303rd guards mixed aviation division of the 3rd Air Force and Air Defense Command, Eastern Military District. The suggestion is based on the analysis of the pictures of Su-30SM fighter with side number ’24’ (RF-95003) visible through a layer of fresh paint, and other indirect evidence.

But while we can guess the military cargoes shipped from Russia to Syria, the cargo shipped back is still a mystery.

Several sources reported about the delivering the bodies of 10 marines from the 810th marine brigade to Sevastopol on September 24. The fact of ‘cargo 200’ arrival to Sevastopol from Syria was also stated by Mustafa Dzhemilev, the leader of the Crimean Tatars. We also got the information from a source close to Russia’s Black Sea Fleet that at least 6 of the killed marines had been noticed in the selfie-scandals during the Syrian assignments. Besides that we know about the tighten measures related to the leaks of information on ‘the Syrian assignments’.

Back to the main subject of the investigation, we want to remind you that this is not the first case the OSINT-investigators of InformNapalm team register Russian military helicopters with painted out markings. We disclosed Russian Mi-8AMTSh helicopter with fully blacked identification marks in Rostov Oblast in close proximity to the state border of Ukraine in September 2014. The reasons why the military equipment’s markings were partly or completely hidden are unknown. Perhaps such actions are carried out in preparation for the illegal transportation of equipment to Bashar al-Assad’s regime, and it is also possible that they are carried out in the context of the ‘hybrid’ war in Donbas.

3 Responses to “Russia’s Air Forces: from Setting Up Provocations in Ukraine to Cargo Delivering to Syria”