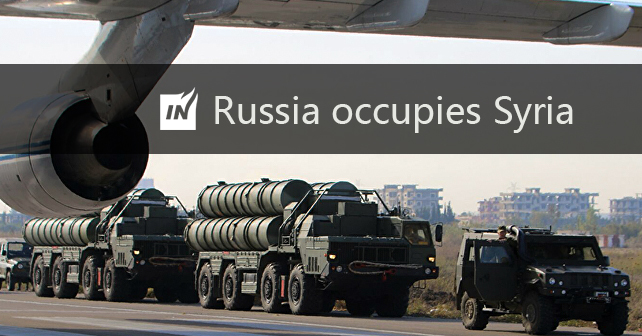 According to the official Kremlin website, this document will be presented to the deputies at the State Duma’s plenary session by Deputy Defense Minister Nikolay Pankov, who represents the President in the consideration of the Agreement ratification by both houses of the Russian Parliament. On July 29, 2016, Russian Prime Minister Dmitry Medvedev ordered the Agreement between Russia and Syria on Deployment of a Russian Air Group to be submitted to the Russian President in order to introduce it for ratification to the State Duma.

The agreement regulates the conditions for the presence of the Russian air group in the SAR. It is emphasized that the group is deployed to the republic upon the Syrian party’s request and is stationed at the Khmeimim airfield, which is provided to Russia, together with the infrastructure and the necessary area, without compensation. Since the international practice in most cases provides a paid basis for such agreements, this clause indicates that the fundamental condition for the presence of the Russian base in Syria is the preservation of Bashar al-Assad’s regime, where the Russian contingent will play the role of a guarantor.

The Russian air group shall act in accordance with its commander’s decisions, based on the plans agreed by the parties. Currently, the air base is commanded by Lieutenant General Andrey Gushchin (born on February 27, 1966 in Vyborg; until 2016 – Head of the coastal defense troops, Deputy Commander of the Baltic Fleet for coastal defense).

The agreement confirms that the weapons, ammunition, equipment and materials required by the Russian air group to perform its tasks and provide security and support for its personnel shall be imported into the SAR free of duties and levies, and the personnel of the Russian air group “shall freely cross the Syrian border and shall not be subject to the border and customs control by the Syrian party”. So, the agreement provides not only for the deployment of the air group itself, but also for establishing an unlimited contingent of ground troops functioning as the air group support and security units, without any coordination with the Syrian party.

Additionally, Russia will now be in the position to use the base in Syria for unobstructed transfer of weapons and any other shipments outside the control of the Syrian party.
According to the Agreement, the composition of the Russian air group shall be determined by the Russian party in coordination with the Syrian party.

In October 2015, InformNapalm international volunteer community launched a series of publications to search, identify and analyze by OSINT methods the personal data of the Russian pilots among the group deployed to Syria. To date, more than 50 pilots and crew members have been identified; the data is available in this infographic: 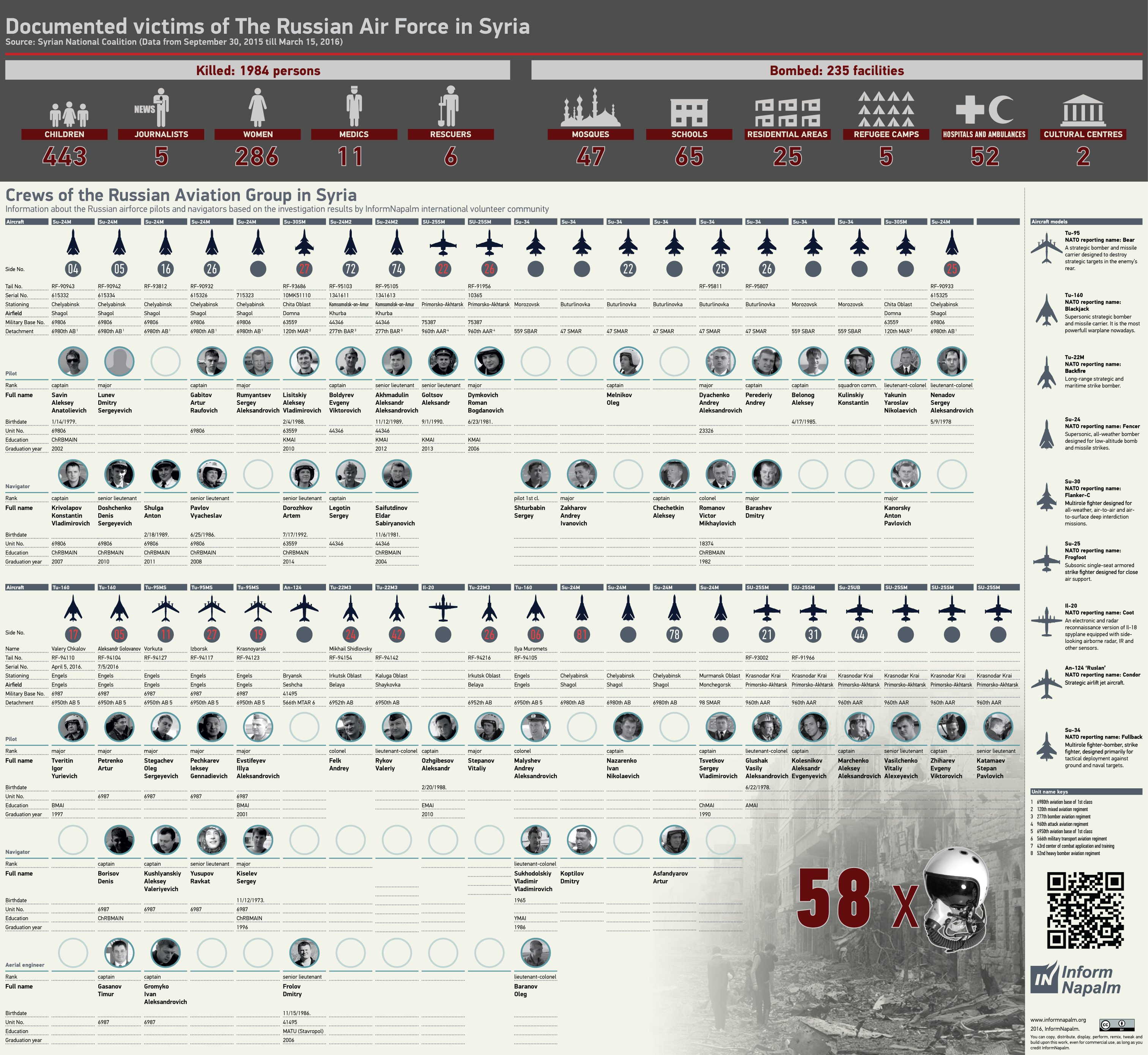 Furthermore, the numerical strength of the group is also known. The logistics battalion of the air base consists of 360 soldiers. The helicopter unit includes 90–110 people. The personnel of the communication and air traffic control battalion is 240 people.

There are about 150 pilots, 280 aircraft technicians, and 690–760 servicemen from the support, service and logistics units at the air base.

As for weapons, the information regarding the layered air defense system has been confirmed.

The total number is about 100 servicemen.

The Russian defense ministry claims that the base is currently guarded by a military police detachment, although earlier this task was performed by the Marine units of the Black Sea Fleet, the 7th Guards Mountain Air Assault Division.

Given the lack of confirmed information on the guard forces of the Khmeimim base, the manpower estimate does not include a presumptive land-based team of spotters, artillery and mechanized infantry units, special forces and Multiple Launch Rocket System (MLRS) crews, which were observed in Syria in 2015, but whose presence is currently not confirmed by the operational data; it also does not include about 300 servicemen manning the naval base in Tartus.

Thus, the total manpower of the base approximately amounts to 1200–1700 people, exclusive of the servicemen families.

It is additionally agreed that the Syrian party makes no claims on Russia, the air group and its personnel, and files no lawsuits concerning their activities.

The Khmeimim Agreement is concluded for an indefinite term and terminated one year after the date of receipt of the notice of intent to terminate this document by one of the parties.

The content of the Agreement demonstrates that the Kremlin consolidates its control over the Assad government and has the opportunity to influence it through security issues. There is a high degree of probability that the Russian Federation will take control of Assad’s personal security, deploying its own troops for this purpose.

The document states that the implementation of the Agreement will not require additional cash infusions from the federal budget, and will be financed within the limits of the funds allocated to the Defense Ministry from the budget for the relevant year.

The analysis of the available video materials shows that the active development of Khmeimim infrastructure began as early as 2015. At the same time, the base will be supported exclusively with Russian goods, materials and components. Thus, as of December 2015, the air base is supplied with Russian food products. The service personnel at the base is staffed with Russian civilians, which confirms that in addition to the battle group, the deployment included fully fledged supply teams.

Since the decision to deploy troops to Syria was made after the Russian military budget for 2015 had been passed, it is safe to assume that the construction work started in 2015 could not be financed from the budget.

The videos broadcast by RT confirm active construction of facilities, including housing, in October 2015.

This confirms the predictions made in March of this year that the Russian President’s decision to withdraw Russian troops from Syria did not mean the complete dismantling of the group. There is a high probability that the declared reduction of the air group was dictated by the need to redirect funding from supporting the group to the construction of the air base infrastructure.

Moreover, at that time the Russian military and political leaders had already been involved in active construction of facilities at  the air base in Latakia. 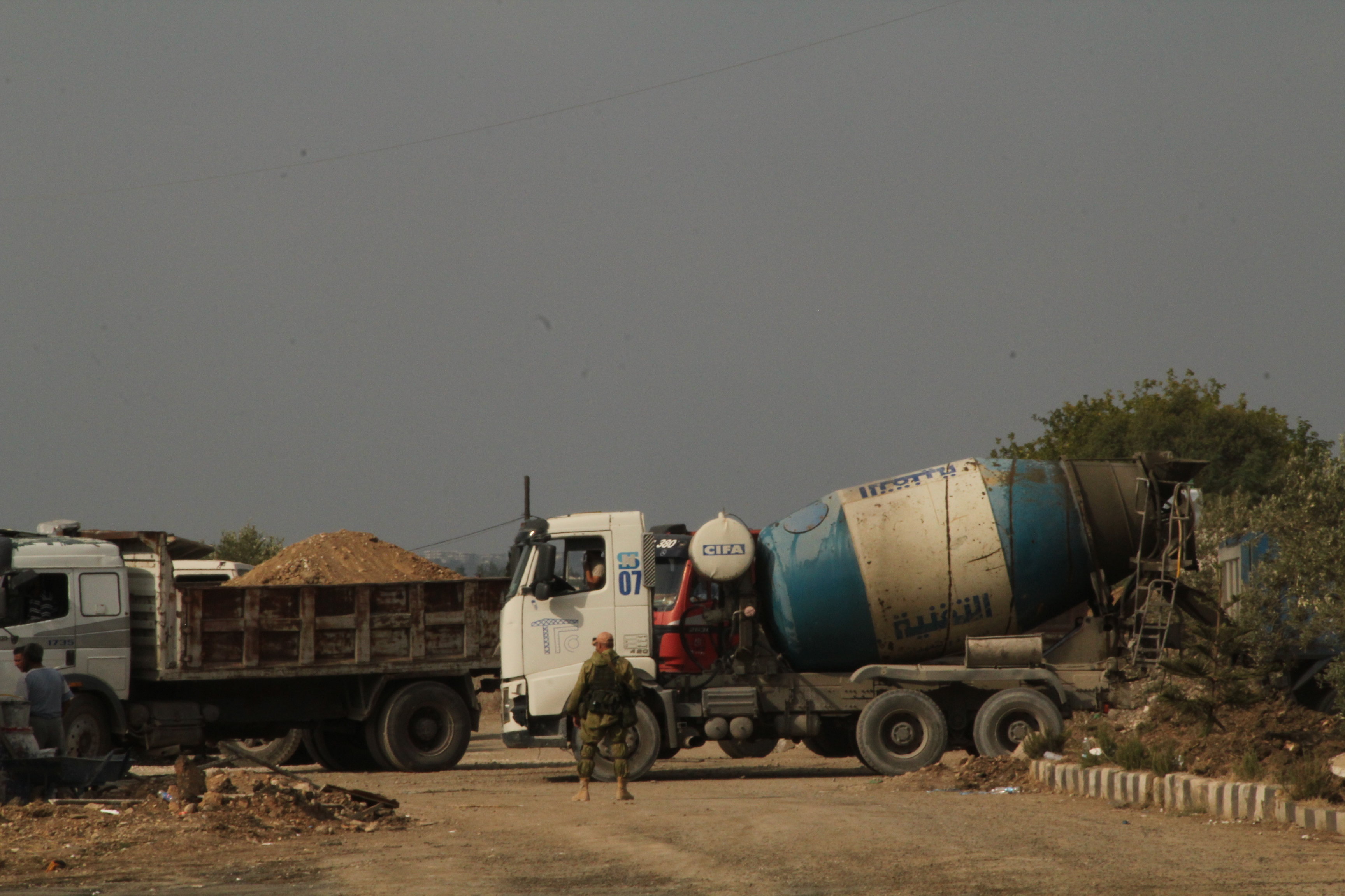 Therefore, the conditions for the Russian group’s presence in Syria, and the large-scale construction of military bases suggest that Bashar al-Assad gave Russia the carte-blanche to occupy Syrian territory. The national interests of the Syrian people and their lands have been sold in return for security guarantees for the dictator. The Russian air group keeps killing the innocent civilians and fighting the forces of the Free Syrian Army, while camouflaging the genocide against Syrians with propaganda slogans about struggle against ISIS terrorists.