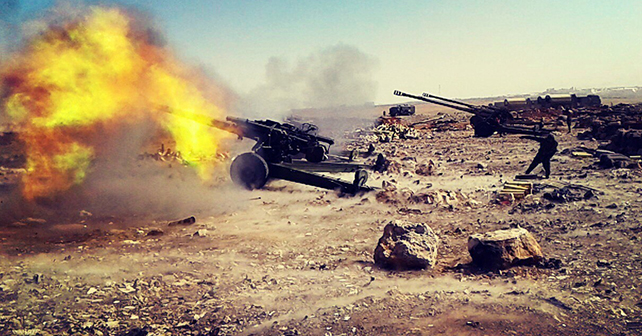 The artillerymen of the 3rd Motorized Rifle Division of the Russian Armed Forces took an active part in the fighting in Syria. We know of at least one dead Russian officer, and his connections revealed dozens of other soldiers secretly participating in the land operation. Based on photos and hand-written notes in the albums of Russian soldiers, the international intelligence community InformNapalm established a chronology of the unit’s deployment to Syria, its dislocation, and the positions that could be used by gunners for false flag operations, imitating the attacks on Syrian rebels from the territory of Turkey. At the end of this investigation you will find a video created by InformNapalm volunteers based on a Russian contractor’s notes.

On January 31, 2017, the InformNapalm volunteers published an OSINT investigation of the Russian artillery captain, Marat Akhmetshin, killed in June 2016 near Palmyra. Only after our publication was this information picked up by the Russian media, and a photograph of Marat with a Hero of Russia medal appeared in social networks.

A few months later, we managed to establish why the Russian command carefully tried to hide information about its “cargo 200″. And after the public report, the Russian propagandists quickly concocted a story about how Marat, being the intelligence officer of the staff of a self-propelled howitzer battalion, “all by himself fought off an attack of two hundred ISIS fighters.” We view this attempt at heroization of the killed artilleryman with skepticism. We became curious, who was there by the dead officer’s side? After all, in the secret ground operation in Syria, the Russian “military advisers” all too often die on the front lines, sometimes even abandoning their arms stores.

Read more: Russian gifts for ISIS: what was left behind in the abandoned military base in Palmyra. 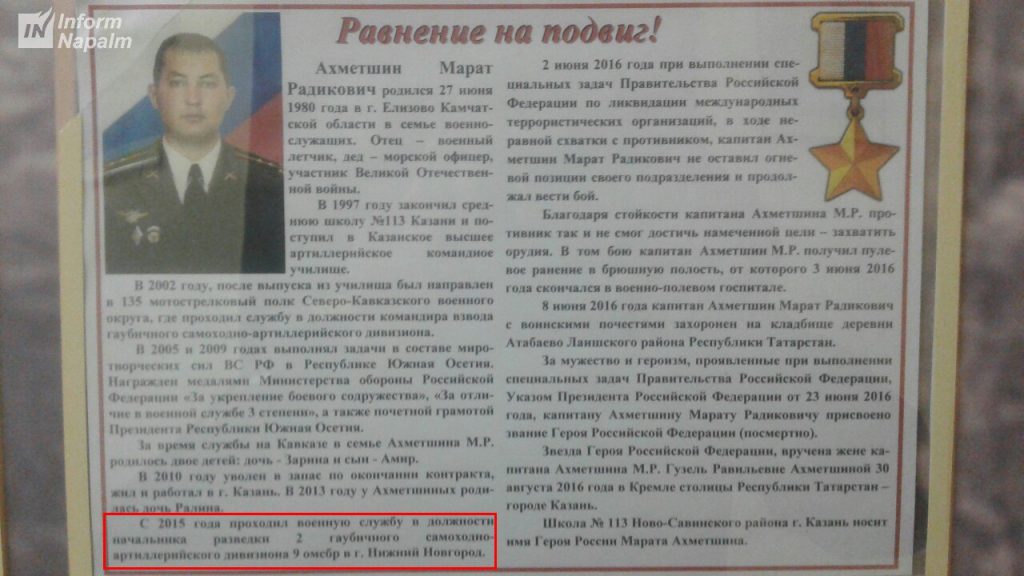 In the analysis of the social profiles of Akhmetshin’s colleagues, we managed to find multiple confirmations of the participation of the artillery of military unit No. 54046 in combat operations in Syria. We also found a group photo depicting 65 Russian soldiers in Syria. The late Marat Akhmetshin is also in that photo. 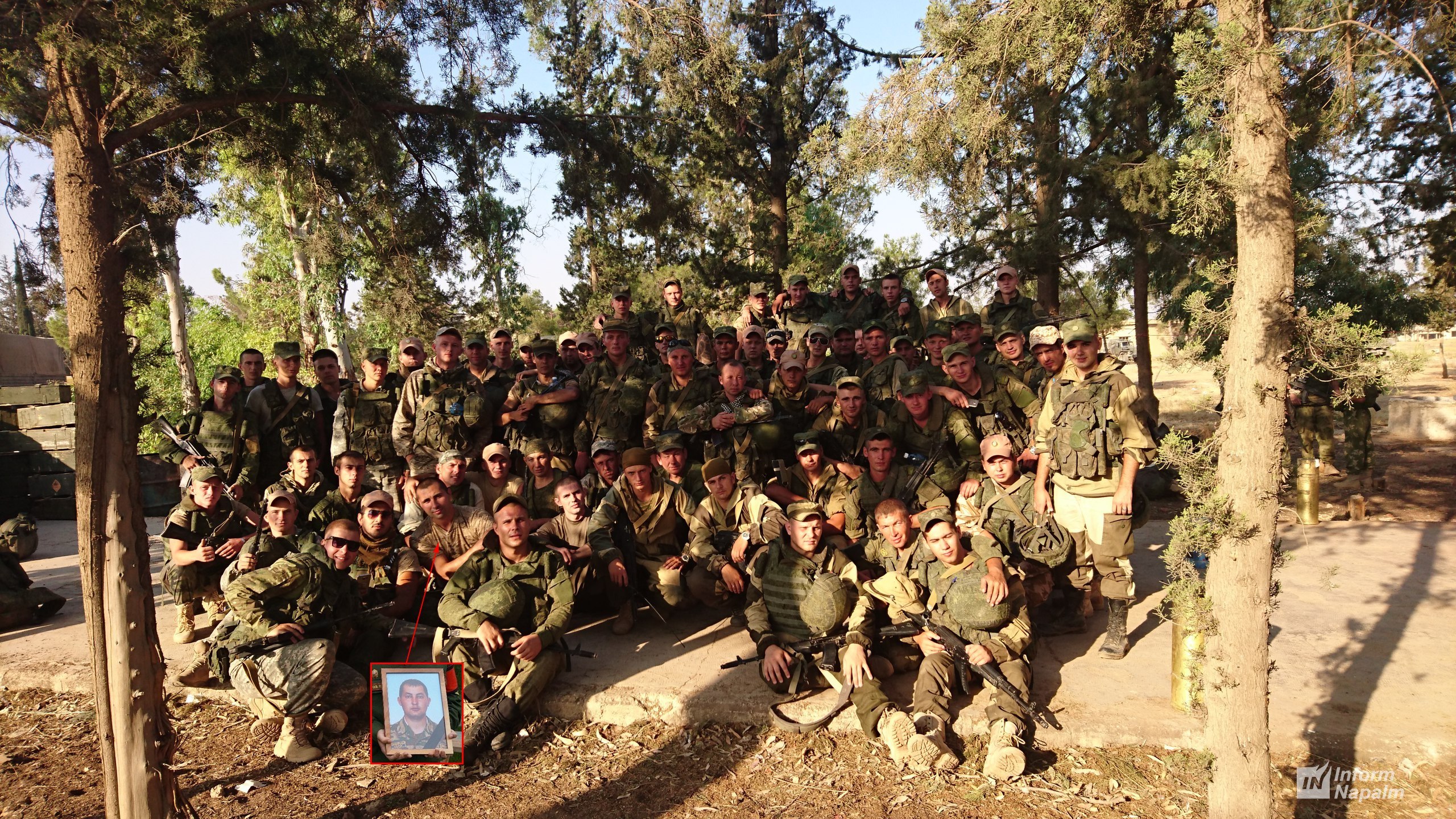 The poems of one of the contract soldiers, which clearly describe the goals and assignments for his stay in Syria, paint no less a vivid picture. Based on these documents and photos,  InformNapalm volunteers determined the chronology and put to a beat the rap written by a Russian soldier (see the video clip at the end of the article).

What we managed to establish

The trip of the Russian artillerymen began after a 3-month training at a training camp in Moscow Oblast in early 2016. First, they were all flown by plane to the air base of Khmeimim. Then a building in Beit Avan in Aleppo Province became the deployment base of the Boguchar artillerymen. Photo: 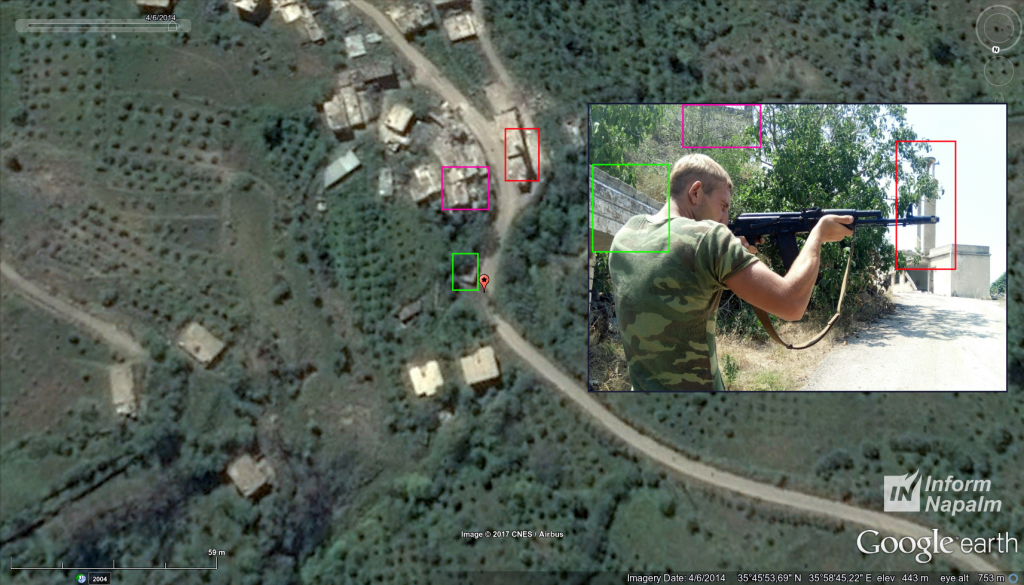 In the album of one of the servicemen, there is a photo where he points at the minaret ( 1 , 2 ). 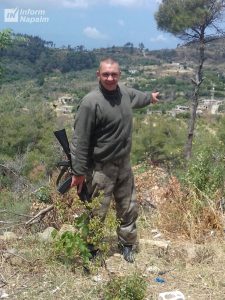 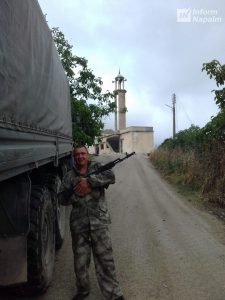 Local coordinating committees in Syria periodically spoke about the units of “Islamic militants” who allegedly set up positions in the mountains in the north of the province, inflicting a series of mortar strikes on the positions of the Syrian government army on the outskirts of the village of Beit Avan.

The Msta-B guns, one of which is seen in the photo of a soldier of the 3rd Motorized Infantry Division, were located nearby. We were able to associate the photo with the terrain, and to determine its geolocation. 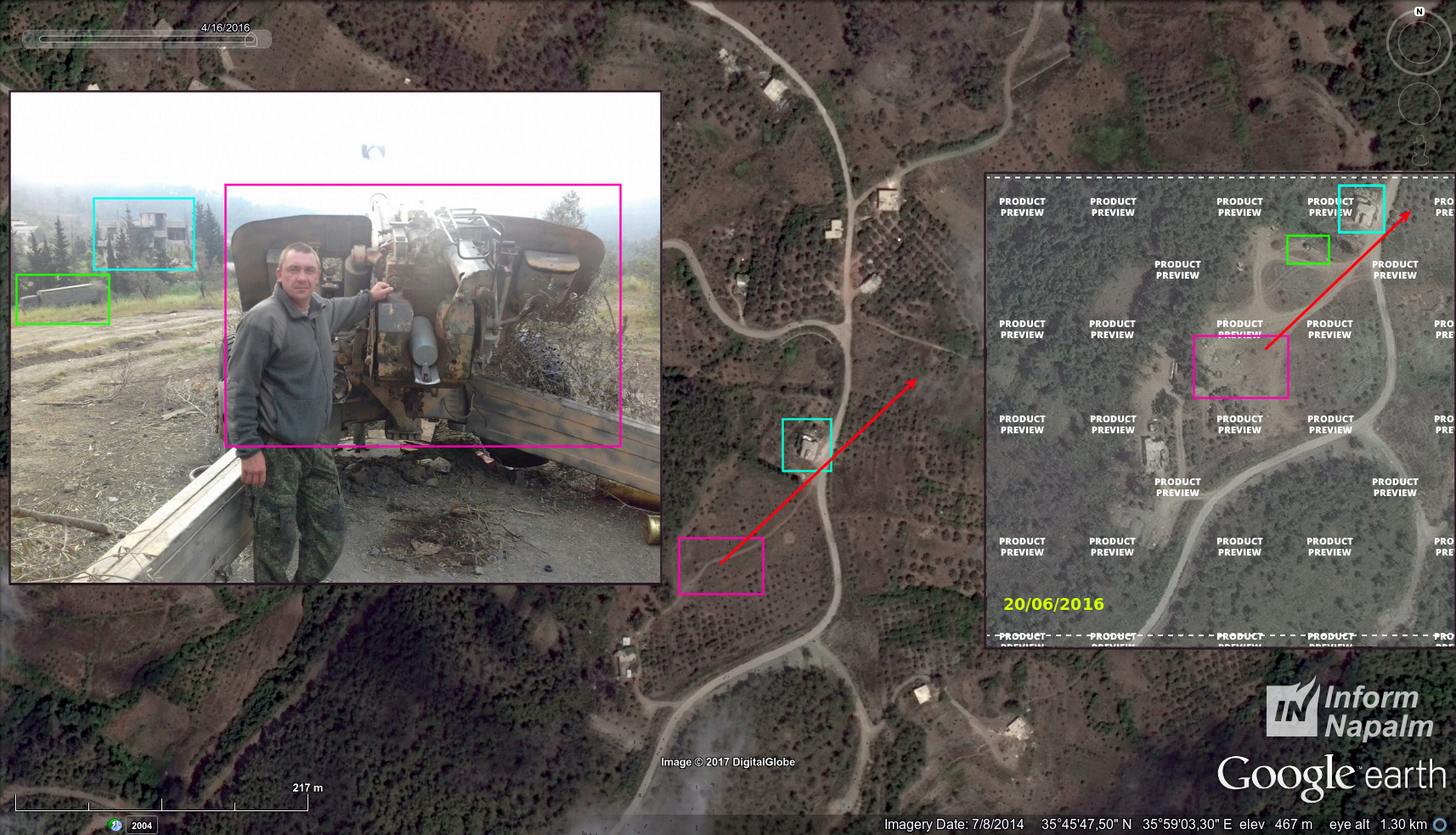 The direction of the arrow on the map indicates the direction of the barrel of the gun, the size of the arrow is the maximum firing range of the high-explosive shell (24,700 meters), which means that from this position the Russian servicemen could fire at Syrian rebels, imitating shelling from Turkey. (On the map: Red denotes territory controlled by Assad’s regime, green – Syrian rebels, white – the territory of Turkey) 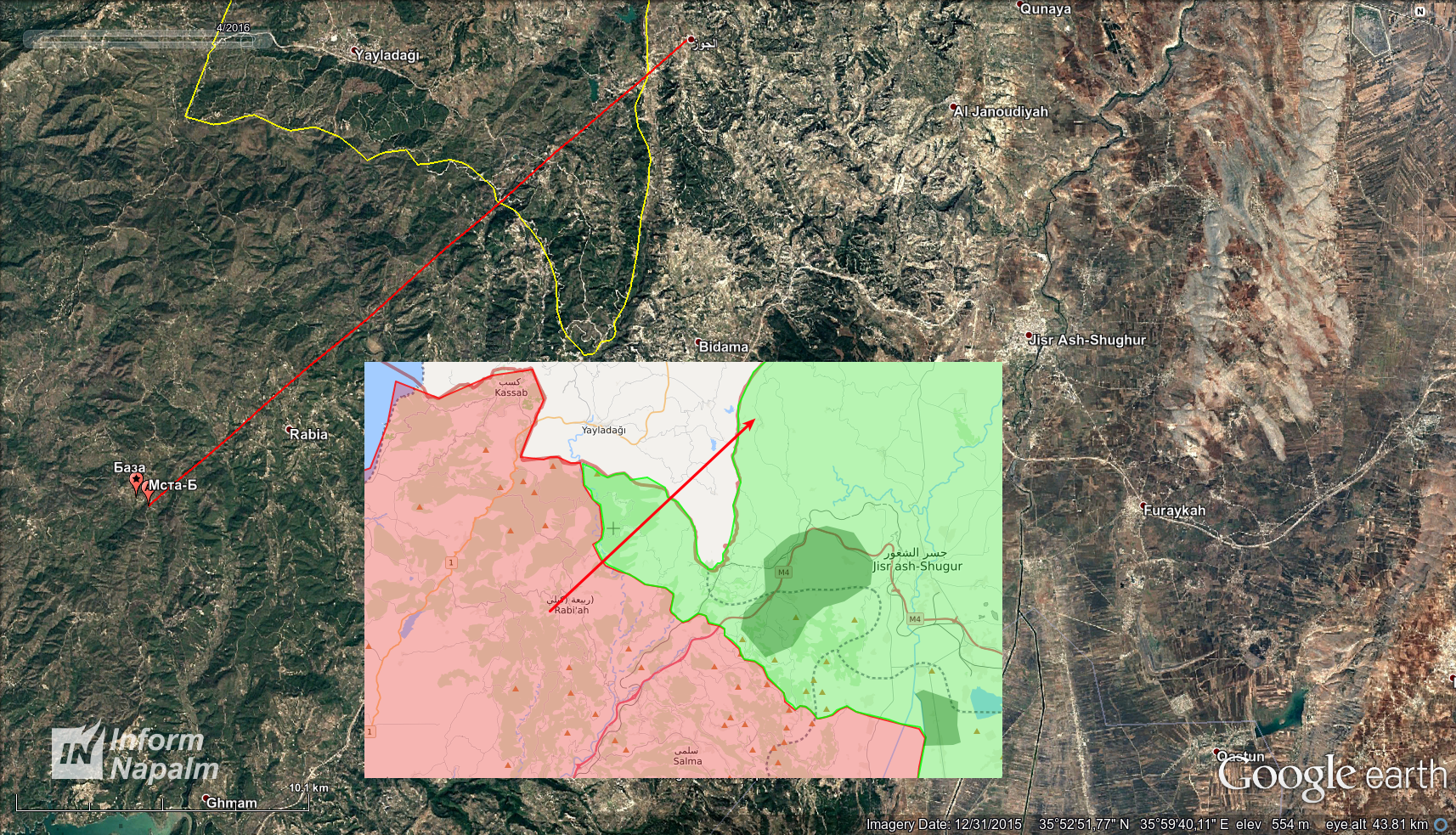 Russian gunners also left their traces at the Turkish-Syrian border at Height 745, better known as “45” or “Shakhids’ Hill”. An entire video report was made about this strategic position. On a satellite image for April 16, 2016, army trucks and Russian Msta-B howitzers are clearly visible. Photo: 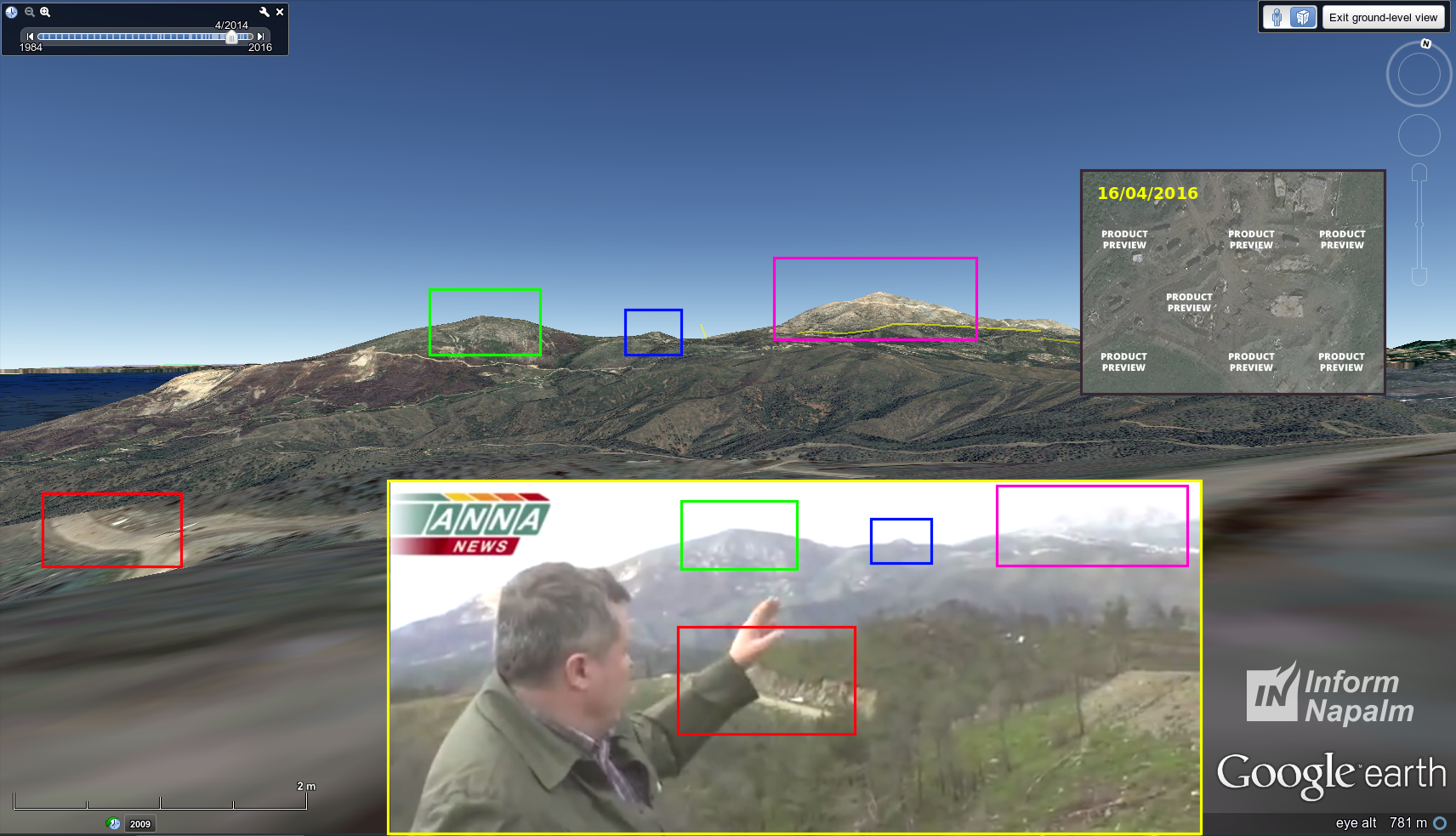 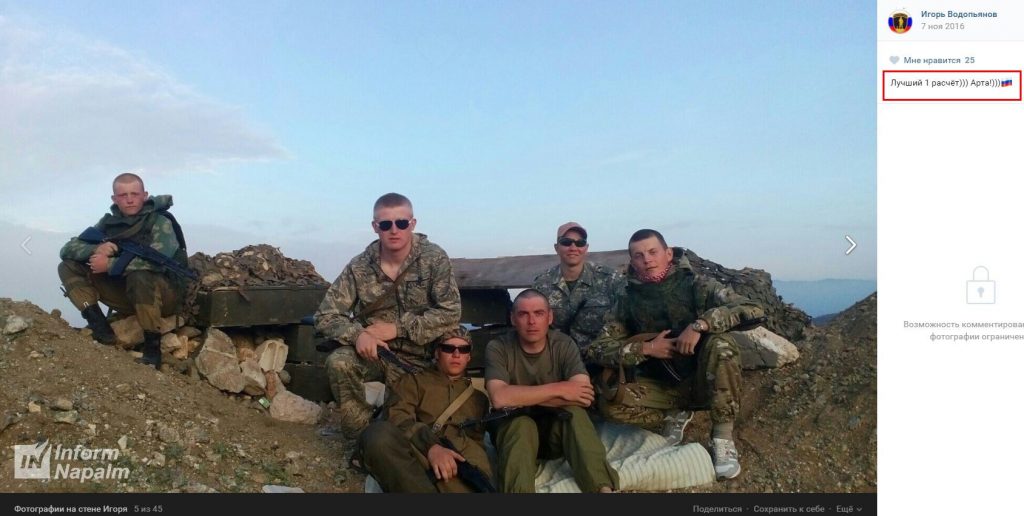 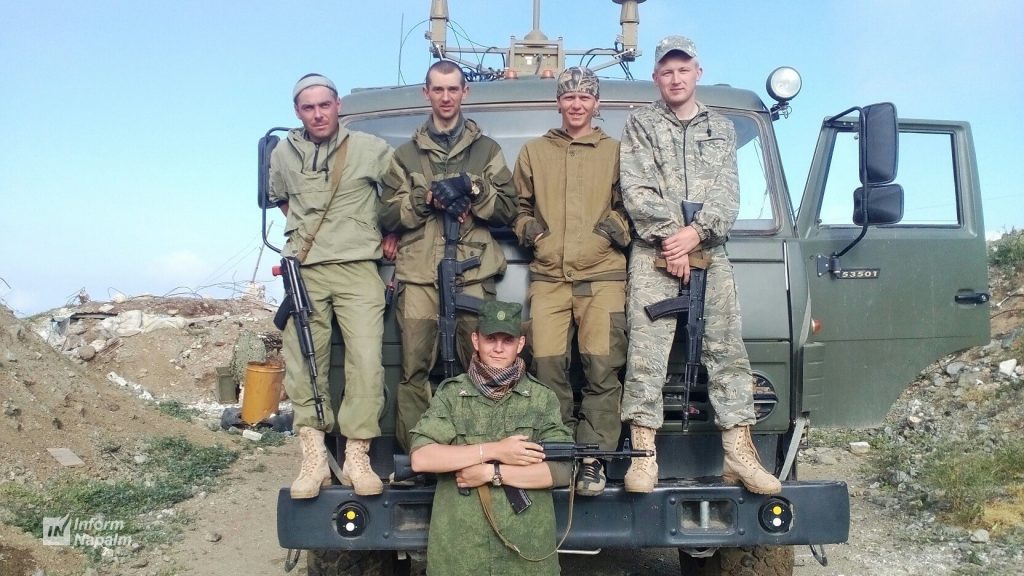 It was the servicemen of the artillery unit who were photographed standing on a KAMAZ-53501 truck equipped with a compact interference transmitter RP-377VM1.

The final destination was Palmyra, where Marat Akhmetshin was killed. The active phase of the clashes occurred at the beginning of May. The servicemen will remember the “May Day Easter” for a long time, as they themselves noted in their poem. The militants’ mortar gun crews worked around the clock. Gradually the artillerymen took the position of the airfield, advancing deeper into Palmyra. 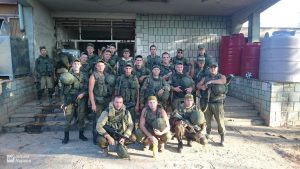 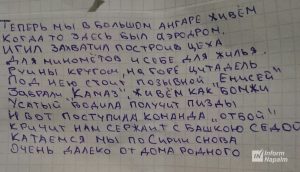 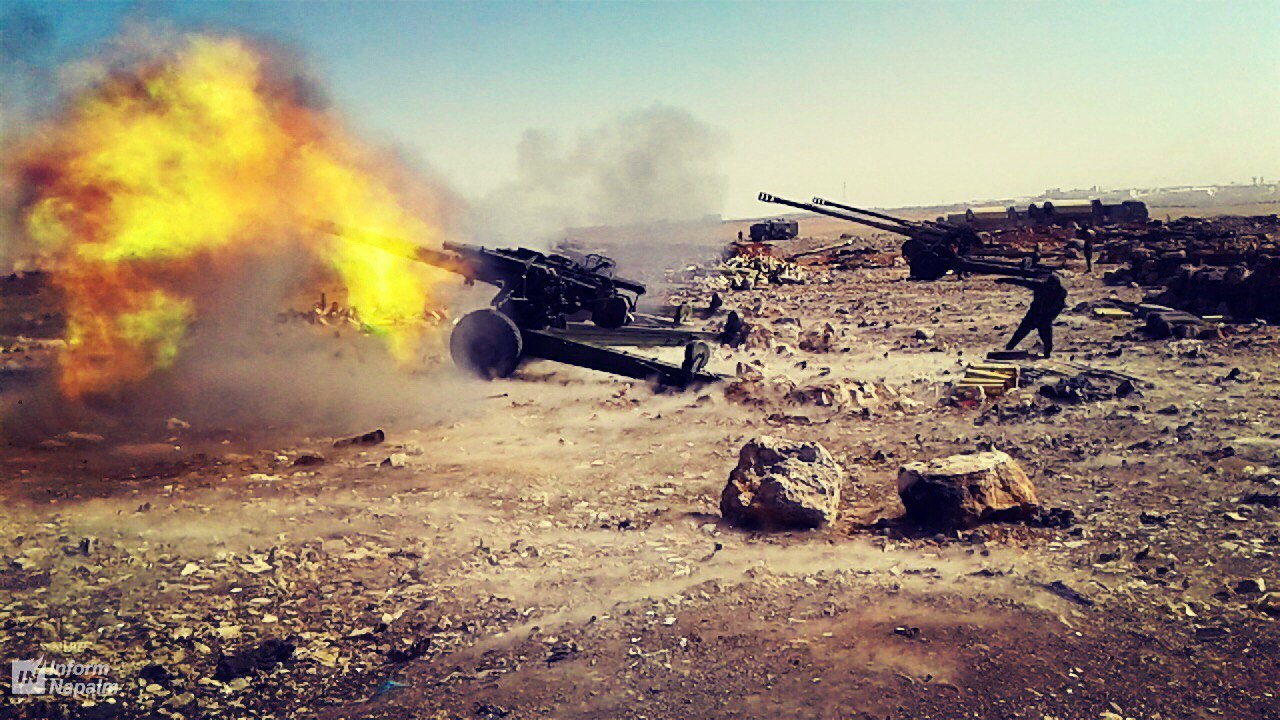 So many witnesses, but not one of the servicemen mentioned on their social media profiles the circumstances, under which Marat Akhmetshin perished. Only after the disclosure and the publication of the report in the Russian media, did sorrowful posts begin to appear. The contract soldiers’ silence was purchased with metal trinkets and combat veteran certificates. And most likely they can tell a lot. How could it be that, with such a numerous unit, Marat suddenly ended up “alone against two hundred ISIS fighters”? Was he abandoned by his own comrades-at-arms? 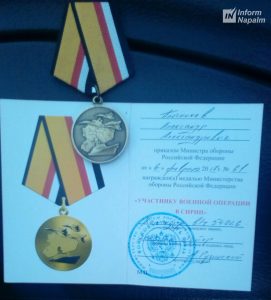 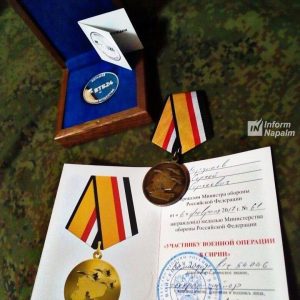 All the contact details of the Russian military personnel we found are ready to be provided to journalists by a separate request through the official Facebook page of the InformNapalm community. They should be willing to research this story in depth and to try and communicate with the direct participants of the events.

We present our readers the “Diary of the Syrian Trip” (with English subtitles) of the 3rd Motorized Rifle Division artillerymen, including personal photos of artillerymen and the chronology of events, based on the handwritten poem found in the social profile of Russian serviceman Igor Vodopyanov.

This publication was prepared by Victory Krm and Mikhail Kuznetsov specially for InformNapalm web site.  Translated by Victor Danilchenko, edited by Artem Velichko
(Creative Commons — Attribution 4.0 International — CC BY 4.0)
Repost and share with friends.
For notifications about InformNapalm investigations follow us on Facebook, Twitter and Telegram.

No Responses to “Russian artillerymen of the 3rd Motorized Rifle Division are secretly fighting in Syria (PHOTO, VIDEO)”