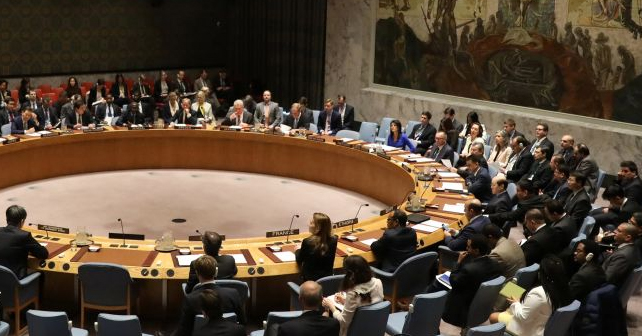 Early in the morning on April 4, 2017, the Russian and Assad’s air forces made an air raid on the town of Khan Shaykhun in central Syria. Some of the dropped bombs contained sarin, a lethal chemical weapon. The attack killed more than 100 civilians and poisoned more than 500. The use of sarin was confirmed by the WHO.

In response to the charges of involvement in the chemical attack, the Russian Defense Ministry issued a statement looking to distance itself from the tragedy. The Assad regime also denies its responsibility in this crime. But even a superficial examination meets the Russia’s line of argument and confirms the charges of the chemical weapons use. Moreover, libel could be added to the charges.

By the way it is not the first time, when Russian military and diplomats are caught lying about their war crimes both in Ukraine and in Syria.

Read more: InformNapalm responds to the Russian Foreign Ministry: there are grounds for a military tribunal

“According to the objective monitoring data, yesterday, from 11:30 a.m. to 12:30 p.m. (local time) the Syrian aviation made a strike on a large terrorist ammunition depot and a concentration of military hardware in the eastern outskirts of the Khan Sheikhun town. On the territory of the depot, there were workshops, which produced chemical warfare munitions. Terrorists had been transporting chemical munitions from this largest arsenal to the territory of Iraq. Both international organizations and the authorities of the country had repeatedly proved their usage by terrorists.” – Russian Defense Ministry spokesman Igor Konashenkov said in the official statement.

But the chemical attack occurred several hours earlier than 11.30 local time. There was no weapons, let alone chemical weapons, depot in Khan Shaykhun, as this town was among those liberated relatively recently by the rebels from the troops of the Assad’s regime. No chemical weapons could have been delivered from there to ISIS in Iraq. Firstly all rebel groups in that zone are at odds with ISIS, and secondly they are separated from ISIS by the territories under the control of the Assad’s army and pro-Assad Kurdish forces. However the chemicals could have well been captured by ISIS in Palmyra, home to one of five Russian-built chemical weapons factories in Syria. (https://en.wikipedia.org/wiki/Syria_chemical_weapons_program) The facts of chemical attacks by ISIS against the Iraqi army, the coalition forces and Syrian rebels have been documented by international monitoring and research (read more: 1, 2).

Another important detail is that chemical weapons have never been used against the Assad’s or the Russian forces during all the 6 years of the war in Syria.

“These chemical munitions had been also used by militants in Aleppo, their using was registered in the end of the previous year by the Russian specialists. The poisoning symptoms of the victims in Khan Sheikhun shown on videos in social networks are the same as they were in autumn of the previous year in Aleppo. At that time, all the facts of chemical weapons using in Syria together with the soil samples were protocoled and transferred to the Organization for the Prohibition of Chemical Weapons. However, the experts of this international organization, having received all the materials and samples, which prove the using of chemical weapons by terrorists in Syria, are still examining them” – Konashenkov said.

Another lie. The use of chemical weapons was indeed documented in Aleppo, but it was the case of Assad’s army using chlorine gas on the rebels, not vice versa. All the claims of the Russian representatives on this matter run comtrary to the official evidence, they are primarily intended for the Russian TV audience.

Read more: Chemical threat in Aleppo is a false-flag show staged by Russia to divert attention

Firstly, it is necessary to be in possession of chemical weapons in order to be able to use them. However, their possession by the rebels has never been reliably reported. On the contrary, it is a documented fact that Assad and Russia have chemical weapons.

Secondly, it is necessary to be in possession of the delivery vehicles for chemical weapons, i.e. airplanes, helicopters, missiles, special bombs or artillery projectiles. Both Russia and Assad have them, unlike the rebels.

Thirdly, there must be professionals in chemical weapons in order to try to develop or use them. Both Assad and Russia have such experts, unlike the rebels.

First chemical weapons were delivered to Syria by the Soviet Union. Before 1993, the Soviet Union and then Russian Federation constructed five factories to produce chemical warfare agents in the cities of Damascus, Safira, Palmyra, Homs and Tartus.

We invite our readers to revisit the investigations of InformNapalm volunteer intelligence community identifying the officers of the Russian Air Force involved in the bombing of civilians in Syria.

Who bombs civilians in Syria: profiles of 116 RuAF officers (Infographics)

A few hours after the chemical attack, the UN Security Council met in New York on the initiative of France. The meeting addressed the use of chemical weapons in Syria. Given all of the above facts, it was no surprise that Russia announced its intention to block any eventual resolutions on Syria.

Russia has consistently and openly supported the continuation of military operations in Syria, acting on the side of Bashar al-Assad. It continues to supply weapons and equipment as well as deploy large numbers of military personnel, both of the air and ground forces. The evidence of Russian ground forces involvement in the war was reported in numerous investigations of InformNapalm.

This publication was prepared by Serhij Repin especially for InformNapalm.

We call on our readers to actively share our publications on social networks. Broad public awareness of these investigations is a major factor in the information and actual warfare.
For notifications about InformNapalm investigations follow us on Facebook and Twitter.