This Is Important: A Comparison between the JFO and OSCE Reports over the 5th Week of the “Truce” in the Donbas 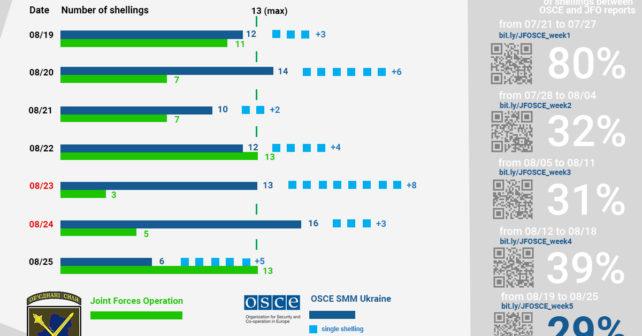 In this article, we will compare the JFO and the OSCE reports spanning the 5th week of the “truce.” We will begin with an explanation of the context for the benefit of all of you who have not been following these reports before and are now seeing them for the first time. This will be followed by the infographics, a table of calculations, and the data from the reports.

The Context: why compare the reports, and what have we learned?

Beginning from July 21, 2019 (the official start date of the so-called “truce”), the volunteers of the intelligence community InformNapalm have been providing a weekly comparison of the official reports of the Joint Forces Operation (JFO) and the Special Monitoring Mission (SMM) of the OSCE. This comparison only looks at the number of shellings done by the Russian occupation forces as stated by the above official sources in their briefings.

The constant monitoring and our analysis of its results became necessary after the first week of the “truce,” when each JFO report between July 21 and 27 showed only “zero” or “one” shelling and ceasefire violation while the OSCE data mentioned 2 to 6 shellings and violations. Thus, the JFO reported about 80% fewer cases of shots fired by the occupier troops compared to the OSCE SMM.

InformNapalm volunteers asked the press service of the JFO to comment and explain why such a significant discrepancy occurred in the data, but did not get a response. Instead, multiple posts appeared in social networks and blogs, attempting to discredit the volunteers’ data, and, when that failed, to promote the explanation that the number of violations was not under-reported and differed from the InformNapalm data solely due to the use of different methodologies.

This explanation is incorrect because the difference in methodologies cannot explain the number zero in every other report by the JFO over that week while the OSCE continued observing violations. We emphasize that the reports included only the violations by the Russian occupation forces, and not the appropriate response. This is a matter of principle that forced us to research this issue.

In our turn, InformNapalm published a follow-up explanation of our decision to track JFO reports, and described the methodology used in the comparisons. Most importantly, the same rules are used when comparing all data from JFO and OSCE reports. Therefore, the JFO’s objection to the validity of the InformNapalm data as expressed in their answers to the Radio Liberty and initially accepted by the journalists as a “refutation” does not explain things as they really are, and only reveals the weakness of the excuses that refer to “the difference in methodology” or “fire opened from both sides.”

On August 27, after the journalist and the volunteer Roman Burko, the founder of the InformNapalm, succeeded in making media change the wording of their articles from “the JFO have refuted the InformNapalm data about the under-reporting of the number of shellings” to “the JFO have objected the InformNapalm data,” Burko’s Facebook page was blocked for 3 days without any explanation. On the same day, the pages of other bloggers and activists who raised other important social and political issues were blocked as well.

Despite the signs of a focused informational attack on InformNapalm and its reports on JFO and OSCE data, the gap between the reported shelling frequencies gradually became smaller. For instance, after we published our first report on July 30, while looking at the reports during the second week of the “truce”, we noticed that their quality had improved. For some time, the number of ceasefire violations in the JFO reports even exceeded the number in the reports by the OSCE SMM. However, it did not last, and the JFO totals for the second week of the “truce” were 32% less than the numbers from OSCE.

For the third week, the gap shrank to 31%, but for the fourth week it went up again to 39.5%. Notably, the JFO reports during the five weeks of the “truce” never showed more than 13 shellings, even though the OSCE reports based on the same methodology showed more. It seems as if the number 13 was chosen as an arbitrary limit of some kind that the JFO was not allowed to exceed under any circumstances.

The fifth week of the “truce” – August 19 to August 25 – is especially interesting because it includes two important state holidays: August 23, the National Flag Day, and August 24, the Independence of Ukraine Day. And it looks like these days allow us to answer the question, why, or for whose sake, the data in the official JFO reports were under-reported all this time?

To answer this difficult question, let us quote the President’s official speech.

Every morning for me begins with a text message. I will be honest, it’s a text message from the General Staff. It says, during the last 24 hours, shots were fired 7 times and we had two casualties. These numbers can vary, but only one number can make my morning a good one: shots fired – zero, casualties – zero. – said Volodymyr Zelensky, the President of Ukraine, in his speech during the celebration of Ukraine’s Independence Day.

Here, we can see the origin of the fiction of “zero shellings” that was pictured in JFO reports from the first week and that the volunteers and the public prevented from spreading any further. Also, we can see here the desire of some officials to make the President’s mornings “good” by reducing the number of occurrences when the occupier forces opened fire.

On August 23, the JFO reports mentioned only three shellings, and on August 24 – only five. On the other hand, OSCE SMM data (adjusted by re-counting with the use of the common methodology) mentioned 13+8 and 16+3, respectively (the added numbers correspond to the so-called single shellings, see below, and introduced into the infographics separately).

We do not know whether the under-reporting or concealing the true scale of the war is the new state policy, or it is an initiative of some individual officials. However, in any case, this trend is dangerous as it distorts reality. The war will not end if we just close our eyes and ears and repeat “end the war” like a mantra. The war must be accepted for what it is, especially at the level of our country’s government, because the realistic perception of this war forms the realistic understanding of the situation not only by the Ukrainian people but also by the people of other countries that support Ukraine in its struggle.

This week, the OSCE reports added a separate parameter to their infographics, termed “single shellings.” It could be taken as a statistical error during the comparisons. Yet, even if we ignore its values when calculating the percentages, it still turns out that the JFO information service under-reports the number of times the fire was opened by 29%. It definitely indicates that the under-reporting does take place and it is deliberate rather than accidental. 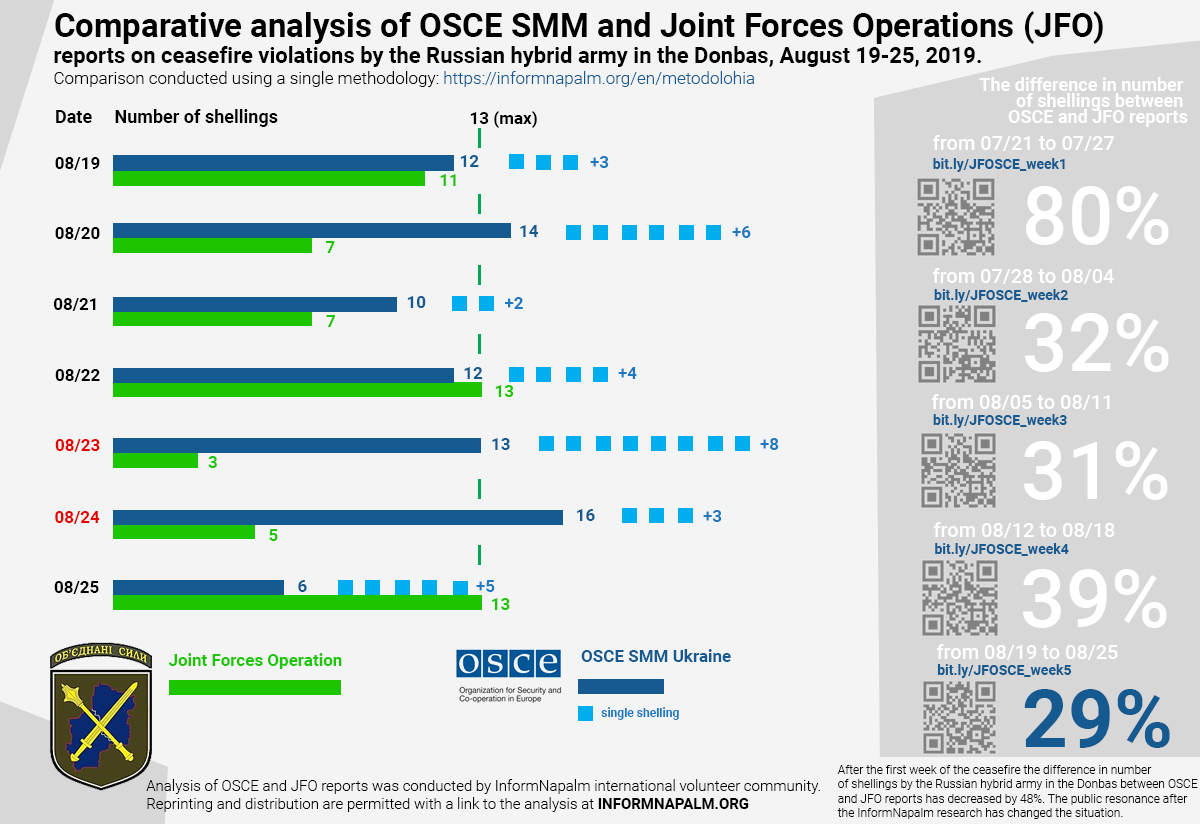 The aggregate table can be found here.

Summary of the week

Russian occupation forces violate ceasefire agreement. According to the OSCE SMM, the duration and density of numerous shelling attacks has decreased, the number of single-shot violations is about 27.5% of the total number of attacks. According to Joint Forces Operation (JFO), the enemy uses large-caliber machine guns, grenade launchers of various systems, small arms, including sniper weapons. On August 19, the use of an unmanned aerial vehicle (UAV) with a suspended VOG-25 fragmentation grenade was for the first time reported by the JFO Press Center. According to the JFO, between August 19 and 25, the armed forces of the Russian Federation and its mercenaries did not use weapons prohibited by the Minsk agreements. The number of targeted attacks remains high and threatens the lives of our soldiers, so the Ukrainian Armed Forces responded with infantry weapons several times on August 19, August 21,  August 24 and August 25.  According to official data, during the fifth week of the so-called truce, one Ukrainian serviceman was killed and eight were injured.

Restrictions on the SMM’s access continued, including at a checkpoint in non-government-controlled Verkhnoshyrokivske, at the heavy weapons storage area in a government-controlled area of Donetsk region, in Donetsk city’s Petrovskyi district, in in Sosnivske and Naberezhne, and at a border crossing point near Izvaryne. SMM UAVs are regularly fired at by militants when flying over the occupied Ukrainian territory. However, the mission reports the following situation on the non-government-controlled territories:

On August 19, observers continued to monitor the security situation along the Sea of Azov coast in Kherson oblast and at the crossing point between Chonhar and Crimea and noted a calm situation. The Mission continued to monitor the situation in Kherson, Odesa, Lviv, Ivano-Frankivsk, Kharkiv, Dnipro, Chernivtsi and Kyev. On August 23 and 24, SMM teams monitored public gatherings on the occasion of National Flag Day and Ukrainian Independence Day in Dnipro, Kropyvnytskyi, Ivano-Frankivsk, Kharkiv, Kherson, Mykolayiv, Odesa, Chernivtsi and Lviv.

On August 20, the website of the Ministry of Defense of Ukraine presented an interactive map of areas contaminated with land mines and explosive objects. The map was developed with the assistance of the Geneva International Center for Humanitarian Demining and the OSCE Project Coordinator in Ukraine. It should be noted that the map shows only government-controlled territories. Information on mine contamination in the occupied territories is very scarce and can be found only in OSCE SMM daily reports.

According to the Chief Directorate of Intelligence of the Ministry of Defense of Ukraine, the Russian occupation command is taking additional measures to increase the effectiveness of drafting campaigns for military service of the local population on the temporarily occupied territory in Donetsk and Luhansk oblasts.

Volunteers of InformNapalm intelligence community have been receiving mounting evidence suggesting that the preparations to integrate the banking system in the occupied territories of the Donbas in the Russian Federation’s financial system are in their final stages. The reports about the integration of the banking system being close to completion are corroborated by both our insiders from the occupied territories and the open-source intelligence efforts.

No Responses to “This Is Important: A Comparison between the JFO and OSCE Reports over the 5th Week of the “Truce” in the Donbas”