Ukraine has dignity: representatives of the aggressor state should be removed from OSCE SMM 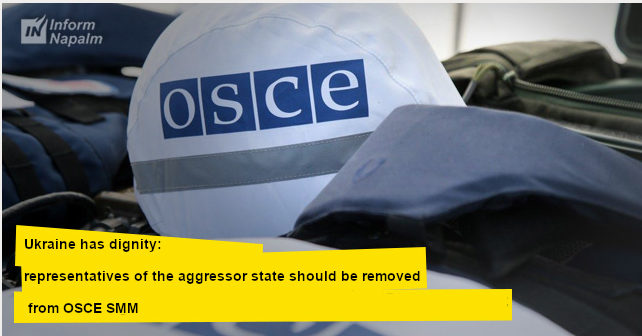 On November 21, Ukraine marks the Day of Dignity and Freedom, an occasion paid for with the blood of Ukrainians who have been fighting against Russian aggression for over five years. InformNapalm volunteer intelligence community should like to call on the readers, journalists, diplomats and all people of good will to consolidate efforts in the struggle for Dignity and Freedom. At 19:00 the popular assembly or Viche took place on the Maidan, where citizens again drawn the attention of the president and his entourage to the inadmissibility of capitulation before Russia and the betrayal of the national interests. But besides the political “red lines” that current Ukrainian officials are constantly trying to cross, there are also specific examples where it is necessary to demand justice and dignity from international organizations. In this feature we provide reasons why it is now necessary to demand that the OSCE withdraws Russian observers from the Special Monitoring Mission in Donbas.

On November 8, 2019, Ukraine won a very important victory at the UN International Court of Justice in The Hague: The court rejected all the objections of Russia and recognized its jurisdiction in the lawsuit of Ukraine against the Russian Federation.

“For the first time, Russia will be held responsible for violating international law and for violating human rights. This is the first time in history when they will be held to account for this. They will answer in court on all the counts and on all of our charges presented in our memorandum, including MH17 , ”said the Deputy Minister of Foreign Affairs of Ukraine Olena Zerkal, commenting on the court ruling.

From the beginning of the aggression, Russia claimed that it was not involved in the war in Donbas, consistently repeating the mantra about the Russian army not being in Ukraine, which gave birth to a meme #IkhTamNiet literally meaning “they-are-not-there”. However, the UN court in The Hague recognized the claim of Ukraine as legitimate and henceforth Russia is not anymore in position to deny its involvement in the war. Russia is a party to the conflict. It has been clear to the world from the start of Russian aggression. Now Russia’s involvement in the war in Ukraine has been legally recognized by an international court which took Ukraine’s lawsuit into consideration.

Another important piece of evidence proving that Russia started a war in Donbas was announced last week by the Joint Investigation Team (JIT), which is investigating the crash of a Malaysia Airlines flight MH17 on July 17, 2014 in the sky over the part of Donbas occupied by the Russian troops. JIT released the intercepted telephone calls of terrorists with Russian officials. These conversations testify to the participation of Russian officials and intelligence agencies in the command of terrorists. “… analysis of witness statements and other information revealed that Russian influence on the DPR [Donetsk People’s Republic] went beyond military support and that the ties between Russian officials and DPR-leaders appear closer. The intensity of Russian influence is relevant to investigating further individuals involved in the downing of MH17,” the JIT statement said.

Given the above facts, InformNapalm volunteer intelligence community believes that action is necessary at the international diplomatic level to insist that Russian observers be removed from the OSCE Special Monitoring Mission in Ukraine, as they represent a state legally implicated in the aggression against Ukraine.

Direct evidence of Russian observers cooperating with the DPR/LPR terrorists

The OSCE Special Monitoring Mission in Ukraine (SMM) began its work on March 21, 2014 on the grounds of a request from the Government of Ukraine to the OSCE and a consensus decision of all 57 OSCE participating States.

As of December 2017, 40 countries sent observers to Donbas. By that time, Russia had its own quota of observers in the OSCE SMM – 39 people. As of August 2019, 35 Russians and not a single Ukrainian (!) were among SMM observers.

Russian observers were on multiple occasions caught cooperating with the illegal armed groups of the Russian occupation forces. For example, in October 2014, a Ukrainian checkpoint observed DPR terrorists and the Russian military men getting in and out of the OSCE vehicles several times. Mission representatives then apologized for the “incident.”

In 2015, a GRU officer was found among Russian observer team at the OSCE SMM .

The coordinator of the Information Resistance group Dmytro Tymchuk noted in November 2014: “…While the citizens of Russia are widely represented in the OSCE, this organization, to our great regret, very often acts as a screen for the aggressive plans of the Russian Federation against Ukraine”.

In early August 2019, journalists of the Ukrainian TSN news service reported that a SMM member, a Russian citizen Nikolai Alekseev, openly showed his hatred of Ukrainians on his Facebook page. In particular, in his reports in 2017 and 2018, Alekseev wished death to the Ukrainians and glorified the LPR/DPR terrorists. Later, the OSCE SMM stated that it had “taken measures” against Alekseev.

On August 31, 2019, an Informator.media correspondent recorded on video how representatives of the Luhansk People’s Republic (LPR) terrorist organization commented on and filmed the screen of the drone operator of the OSCE mission, which flew over Ukrainian positions in the area of Stanytsia Luhanska.

As part of the OSCE SMM, Russians have direct access to information about Ukrainian positions, weapons, UAV videos of the mission, and they can also influence the reports. This is a unique legal absurdity when the aggressor has more rights than the victim of aggression. In addition, the OSCE is entrusted with the function of monitoring violations during the process of the separation of forces in Donbas. We have grounds to believe that Russian observers will exercise their hybrid influence in the mission. This situation needs to be changed.

InformNapalm volunteer intelligence community. Distribution and reprint with reference to the source is welcome! (Creative Commons — Attribution 4.0 International — CC BY 4.0)

No Responses to “Ukraine has dignity: representatives of the aggressor state should be removed from OSCE SMM”