US Sanctions on Russia: An Overview. Part 2. Ukraine related sanctions 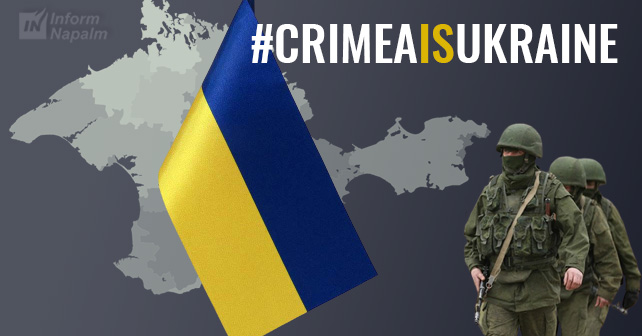 The very beginning of sanctions against Russia is the invasion to Ukraine. Since 2014 more than 1,100 private and legal persons are on the US and EU sanctions lists. Sanctions apply to dual-use products and entire sectors of the economy. The Russian economy is estimated to lose about $ 50 billion annually as a result of the sanctions.

The US is currently imposing sanctions on Russia in connection with the 2014 invasion of Ukraine, cyberattacks (including election interference), human rights violations, the use of chemical weapons, arms proliferation, trade with North Korea, support for the Syrian and Venezuelan governments, and the use of energy exports as a political tool. 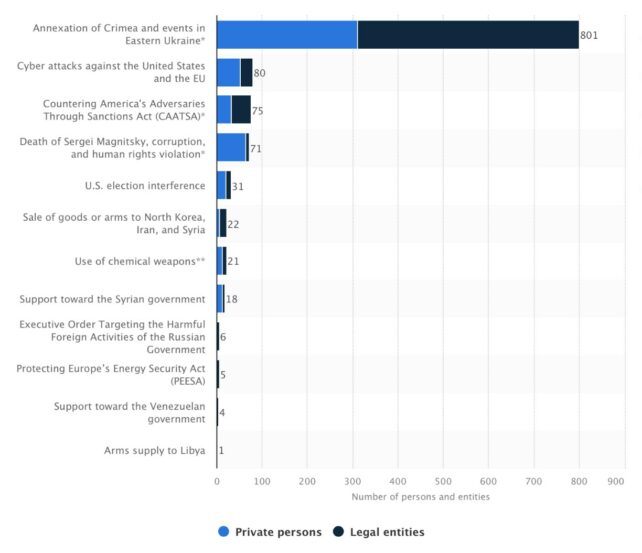 Number of private persons and legal entities included in sanction lists of the European Union and the United States on Russia as of May 21, 2021, by goal / Source statista.com

Among the first who were included in the list of sanctions at that time were deputies of the Russian Duma – Elena Mizulina and Leonid Slutsky, Chairman of the Committee on Constitutional Law, Judicial and Legal Affairs and Development of Civil Society of the Council of the Russian Federation – Andrei Klix, Chairman of the Russian Duma – Valentina Matviyenko, Deputy Prime Minister – Dmitry Rogozin, Deputy President of Russia – Valdislav Surkov and Adviser to the President – Sergei Glaziev. This list was later expanded by such well-known Russian oligarchs like Oleg Deripaska, Igor Rothenberg, Viktor Wexelberg and others. Related companies were also included in the list of sanctions.

The next major event that led to the tightening of sanctions was the down of the MH17 passenger plane of Malaysian Airlines on 17th July 2014. In response to this terrorist attack the United States immediately, on 29th of  July, imposed sectoral sanctions on Russian economy and in particular on the armament, energy and financial sectors. On 8th of August 8 US has imposed a ban on exporting oil and gas technologies to Russia. On 12th of September followed ban for US companies from entering into any commercial deals with Gazprom, Lukoil, Transneft, Gazprom Neft, Surgutneftegaz, Novatek and Rosneft. On 19th of December 2014 was released an executive order no. 13685 which banned any trade with companies registered in the Crimea.

All these sanctions were subsequently expanded and extended. In 2017, all earlier issued presidential executive orders related with Russia were approved by the so-called CAATSA (Countering America’s Adversaries Through Sanctions Act) and now can be revoked only by the US Congress.

No Responses to “US Sanctions on Russia: An Overview. Part 2. Ukraine related sanctions”