Withdrawal of U.S. troops from Afghanistan used to discredit NATO in pro-Russian media 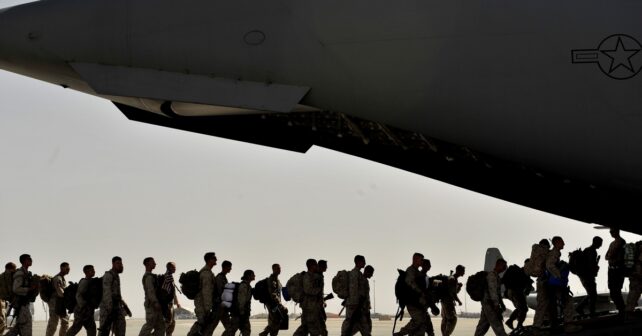 In August 2021 U.S. troops withdrew from Afghanistan after nearly a two-decade-long mission launched after the Al Qaeda 11 September 2001 attack. Although the majority of troops from other NATO member states that took part in the mission left a couple of months earlier, events that unravelled during August and September were used in the pro-Russian media, predominantly based in Serbia, but with a large audience in Montenegro as well, to discredit NATO as an organization.

Approximately 20-year long NATO mission in Afghanistan ended at the beginning of September. The speed at which Taliban forces took control over the country, entering the capital city Kabul, and the chaotic scenes of withdrawal of predominantly U.S. military forces, provoked a lot of interest in the media worldwide. This was the case in Montenegro and the whole region as well. All of the narratives and sub- narratives identified (over 20 in total) are present in all the NATO-related events while only two were tied to the Afghanistan mission. Besides the sub-narrative that the particular mission was a failure, the NATO is obsolete, i.e. an ineffective organization also stands out.

DebunkEU.org analysed approximately 1,000 articles published in digital outlets based in Montenegro, Serbia, Croatia, and Bosnia and Herzegovina including social media posts as well. Although there are differences in languages spoken in the four countries, there are no major obstacles for the audience to understand the content published in any of the regional media. Nearly 20 percent of the analysed content was labelled as misinformation. Also, the analysis showed that a fifth of the problematic content was disinformation, i.e., intentionally placed false and misleading information.

The majority of disinformative content was shared by outlets based in Serbia, known for their pro-Russian and anti- NATO editorial policies. Out of the top 20 outlets ranked according to the amount of problematic content published, only five are based in Montenegro. Although the remaining 15 are from Serbia, their influence in Montenegro is significant. For half of them Montenegro is among the top five countries where their traffic comes from. When we add to that the fact that the population of Montenegro is a tenth part of the population in Serbia, 50 percent of traffic in Serbia, equals 5 percent traffic coming from Montenegro. 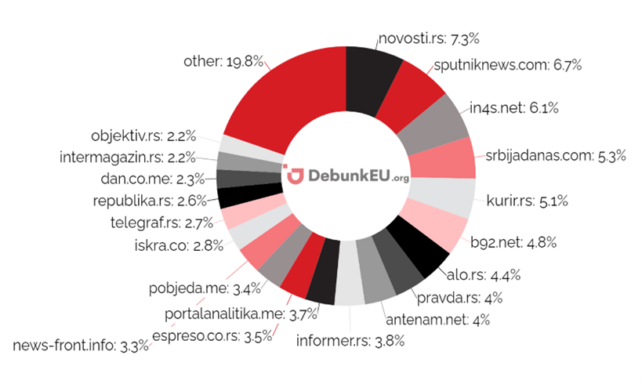 The lesser amount of disinformation in Montenegrin outlets regarding this particular topic can be attributed to the characteristics of the local media market. Since Montenegro is relatively small, the revenues of the media are also smaller which further reflects the fact that the majority of outlets for any foreign policy topics have to rely on foreign media and news agencies. The majority of media do not have networks of correspondents and those who do, are predominantly either Washington or Brussels-based and focused on relations with U.S. or EU integration policies. This is not necessarily a ‘bad thing’, on the contrary. The majority of local media rely on credible sources such as BBC, Reuters, and AP which is further seen in the quality of published content.

Although by the beginning of August the largest part of the troops from the European NATO member states, the withdrawal of the U.S. troops was used to discredit NATO as the organization often through overlapping statements, or using as synonyms- NATO, U.S., and Americans (note: this analysis focused only on publications or parts of them that explicitly mentioned NATO). Although the majority of events that unravelled were connected to the U.S. troops and their withdrawal, most of the identified narratives and sub-narratives were present in other analyses related to NATO. Only two narratives focused on this particular mission, out of which one saying that ‘the mission was a failure’ was dominant. The analysis revealed that the second narrative – sub-narrative pair measured by the number of publications was “NATO is obsolete” and “NATO is ineffective”. 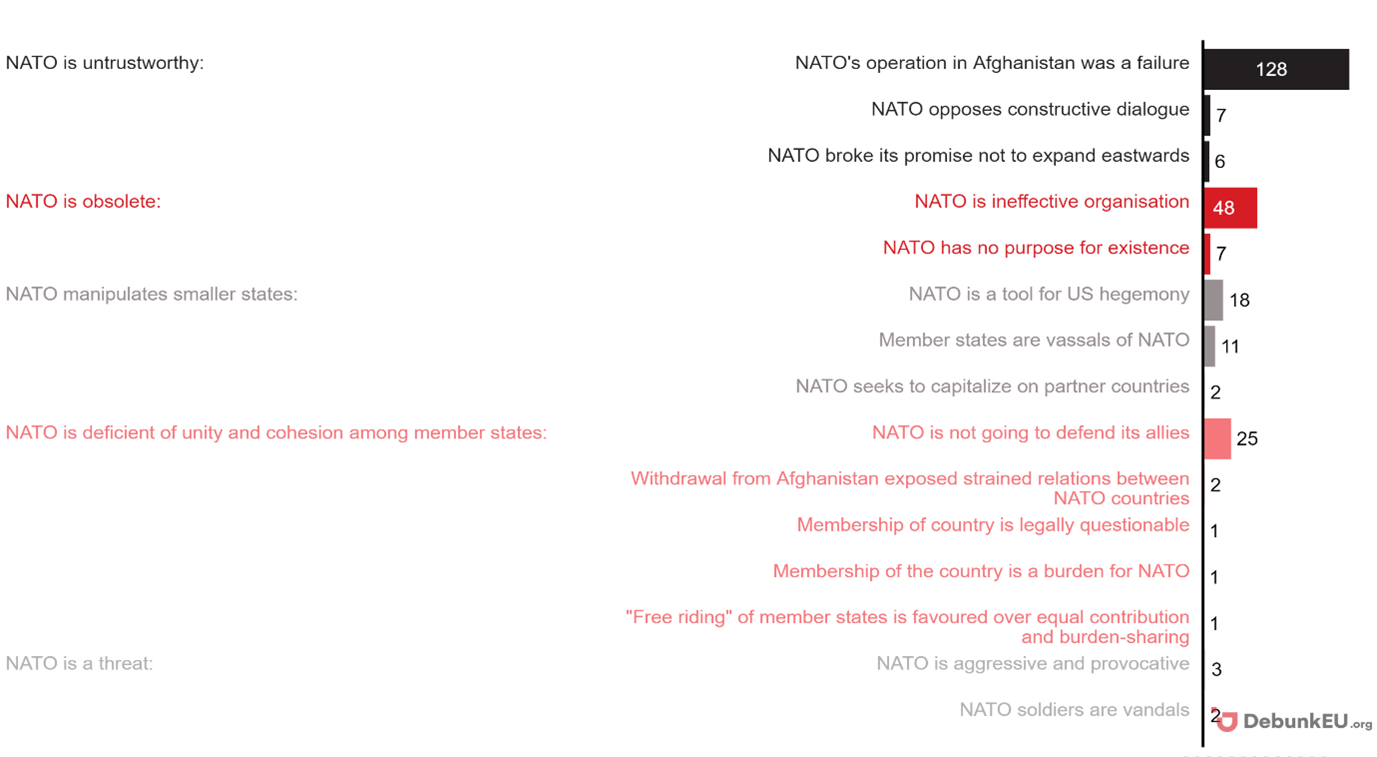 Narratives and subnarratives by mentions

The end of Afghanistan mission was not (ab)used just to promote the anti-NATO but as well pro-Russian stances. In one particular case, a Serbia-based outlet, glas-javnosti.rs, published an article promoting the Russian-supported idea of “neutral Balkan four”. The piece quoted statements by a Russian official, Sergei Zheleznyak, made during his last visit to Serbia, five years earlier. Then he claimed that there might be conflicts which NATO will be responsible for when Montenegro is forced to join. However, not only did Montenegro join and there were no conflicts, but North Macedonia joined the Alliance as well in the meanwhile, and no conflict happened either. It is unimaginable that any journalist had missed this information. 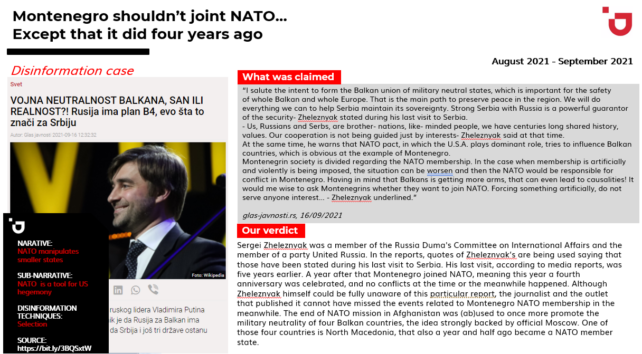 Selection was the most present rhetorical technique used in problematic content – it was recorded in in approximately every third publication analysed. This is the case because most of the labelled publications omitted some of the crucial information that puts the events in proper context, particularly when the analysed articles relied on statements made by various politicians, officials, or ‘independent’ experts known for their anti-NATO stances without mentioning any relevant data that might question the said statements.

For example, such was the case of reporting that the military service dogs are being evacuated underlining the fact that there are still Afghani people who want to leave the country, omitting that thousands of refugees have already been evacuated. Another piece of news that provoked a lot of interest was about the weapons NATO and U.S. military troops left behind in Afghanistan – in those articles it was emphasised that the Taliban got a hold of the equipment, often omitting that it is unknown what amount of it was still in use, what was dismantled, disabled and outdated.

No Responses to “Withdrawal of U.S. troops from Afghanistan used to discredit NATO in pro-Russian media”