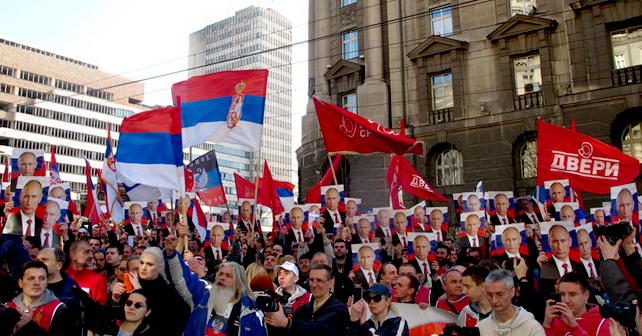 The Alexander Gorchakov Public Diplomacy Fund was established in 2010 by the Ministry of Foreign Affairs of the Russian Federation by the decree of Russian President Dmitry Medvedev. The speaker of the Ukrainian Cyber Alliance Sean Townsend showed how the Russian “soft power” worked against Ukraine in the first part of his investigation. In the second part, we will overview the actions of Russian hybrid “diplomacy” in Central Europe.

Gazprom, the Kremlin-controlled company, is an important instrument of Russian influence and the source of funding of promotion of the “Russian world” abroad. According to the correspondence of the Institute of CIS Countries, Gazprom allocated two million dollars for the subversive activities of this so-called “autonomous non-profit organization”. Its head is Konstantin Zatulin, a member of the State Duma from the ruling United Russia party.

InformNapalm has already reported how Russian oligarch Konstantin Malofeev financed destabilizing activities in Poland, Hungary and the CzechRepublic. The Institute of CIS Countries acted in the same way and is famous for its support of Russian collaborators in several regions of Ukraine. But let us focus on its subversive activities against other countries of Central Europe.

In October 2014, Sergei Pravosudov, editor-in-chief of the Gazprom magazine and Director of the National Energy Institute compiled an analytical report in which he outlined his vision of “Soft power” of  Russia in Serbia and Bulgaria:

Gazprom can not directly finance the opposition. For example, the Doors movement which opposes Serbia’s accession to the EU. The Doors believe that Serbia should become a member of the Eurasian Union and rely on Russia. This party is practically not represented in the leading Serbian media whose information policy is explicitly anti-Russian. At the parliamentary elections in 2013, the Doors got 4% of the votes and did not get into the parliament because of the 5% threshold.

In order to maintain and strengthen its impact, Gazprom needs to cooperate with a public organization that, under the guise of humanitarian projects, will actively work with public opinion in Serbia and Bulgaria. Since residents of these countries have traditionally treated Russia positively, it is quite doable. As a result, we will see demonstrations on the streets of Belgrade and Sofia in support of the Gazprom projects and Russia. Their slogans will be like: “We do not want to freeze because of Ukraine”. If Vladimir Putin during his visit to Serbia would offer this country to join the Eurasian Union and if he would mention the Doors movement supporting this idea, it would be a good signal for Serbian voters. Because now they are absolutely sure that Russia supports the current government of Serbia. In Bulgaria the situation is almost the same as in Serbia, just there are still less Gazprom’s investments here.

As we see, the activities of Russian companies Gazprom and Lukoil are associated with the usual blackmailing and coverup of subversive activities. We are perfectly familiar with this strategy in Ukraine. Aksenov’s Russian Unity party also got about four percent during elections in Crimea, but it faithfully served Russia during the occupation of the peninsula. Russia planned to invest up to 500 billion rubles (from the Russian side) and 10 billion euros in the construction of the offshore part of the South Stream pipeline. Fortunately, this money literally were thrown into a pipe, and in April, Gazprom reported a 53 billion rubles loss.

But let us go back in 2014: the Doors are holding a “patriotic” anti-government rally in Belgrade. Ivan Kostich sends a photo report to the Gorchakov Found: 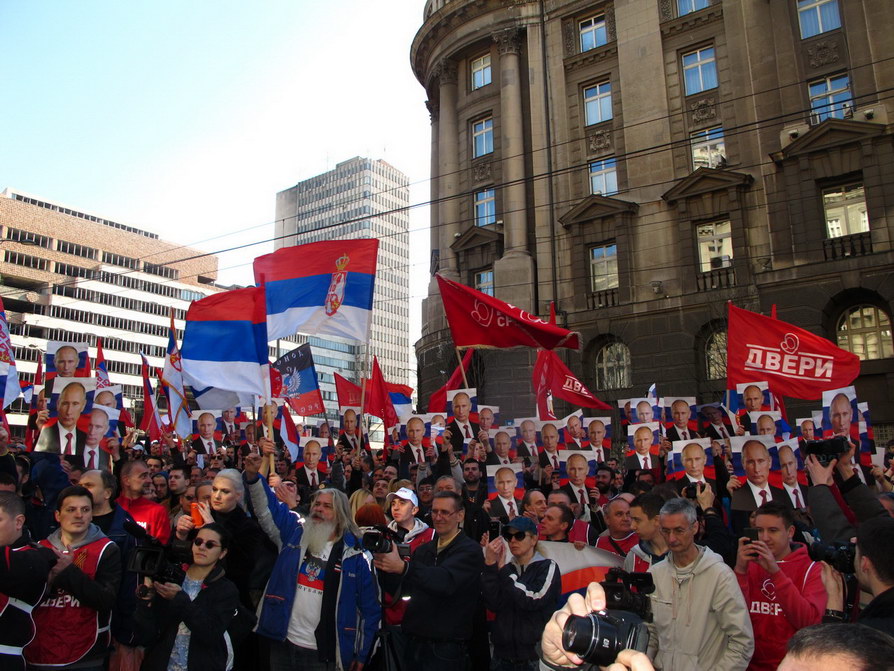 We see a typical Russian “humanitarian” project: flags of unrecognized republics along with Russian and Serbian tricolors. This fact is specially emphasized in the press release so that no one has any doubts about that:

“During the protest that began outside the government building and in the heavy police presence, the protesters carried flags of Serbia, Russia, the Republics of Novorossia and the images of Russian President Vladimir Putin.”

What ends such rallies is known from the example of the occupied Donetsk and Luhansk. In 2013, the Gorchakov Fund financed the same kind of political outsiders and freaks in Ukraine who went to rallies with foreign flags and slogans “Putin, bring in your troops”. Almost all (with rare exceptions) grantees of this Russian fund in Ukraine took an active part in terrorist activities in the framework of bandit groups LPR and DPR and are now listed in the Purgatory section of the Ukrainian website Myrotvorets. And it all started with slogans about Russian language and culture.

How does Russia work in Europe? For example, the cultural attaché of the Russian Embassy in Bosnia and Herzegovina sends an information note about the situation with Russian language in this country. Vyacheslav Charsky is a deputy chief editor of the International Projects Department in “Rossiyskaya Gazeta” and a senior lecturer of Slavic Studies and Central European Studies at the History and Philology Faculty of the Russian State University for the Humanities. He applies for 2.615 million rubles from the Gorchakov Fund to create a center of the Russian language and political culture in Belgrade (Estimates in XLS).

For comparison, recall that in 2013 Yuri Apukhtin from Kharkiv in Ukraine received from the Fund about the same amount of money for “promoting the ideas of the  Russian world”. His activities ended up with a sentence of 6 years of imprisonment for “mass riots” and “violent change of the constitutional order”. Valentin Chernov, an accomplice of the DPR terrorist from Odesa, also requested money for the “festival of the Russian language” supposedly to commemorate a birthday of the russian poet Lermontov. Subsequently, this Lermontov’s fan was seen in group photos with separatists. In the photo below, he is in the center, next to the “People’s Governor of the Odesa Republic” Kaurov, during the speech of the member of Ukrainian parliament Trukhanov on the Kulikovo Field in Odesa: 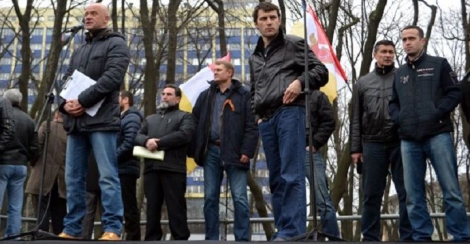 The ways of promoting the “Russian world” by Gazprom via the Gorchakov Fund both in Central Europe and in the countries of the former USSR are absolutely identical.

In the former Soviet republics, Russia is even more rude and insolent. In August 2015, political analyst Nikolai Tsvyatkov sends an analytical note titled “The situation of Russian speakers in Moldova” (DOCX) to the Fund. This note describes the role of the Russian language and autonomies in the expansion of Russian sphere of influence:

“To return Moldova to the sphere of direct influence of Russia it is necessary to abandon the outdated paradigm of public consensus. This abstract idea [of tight relationships with Russia] was understandable to “Soviet people” but completely alien to the current Moldova authorities and their curators.

“[We must] concentrate our attention at the 12 pints of growth in Moldova. We are talking about 12 cities: in the north – Balti, Soroca, Ungheni; in the center – Chisinau, Orhei, Hincesti; in the south – Cahul, Comrat, Taraclia; and in the east – Ribnita, Bendery, Tiraspol. 9 out of 12 cities are Russian-speaking. Condition their loyalty by direct Russian aid.

“Shaping of the elite of the “pro-Russian youth”. We are talking about medium-term planning, for 3-5 years, which will allow to form a stable constellation of Russia-oriented young specialists in various fields: economy, law, journalism, politics, industry, and agriculture. This group should not exceed 100-120 people. They will set the tone of public discussion.

It should be noted that, as in the case of Crimea, autonomy in the absence of any real prerequisites for a federal structure of the state leads to the isolation of the region, which can later become a hotbed of hybrid aggression. The language barrier or economic isolation helps Russian hybrid structures to take control of the local financial-industrial or criminal groups. It is much easier to individually recruit local leaders of public opinion than to force central government to such an unnatural cooperation. Russian political strategists should remember that games with fire end badly. Instead of “Slobozhanshchina” or “Bessarabian Republic” it is possible to get a real Astrakhan or Kazan Republic with a lineage that goes back to the times of Ivan the Terrible.

Similar projects are being implemented in the Baltic states. And as the imposing of Russian culture meets resistance there, there are calls for “peace”. This resembles an old Soviet joke: there will be no war, but there will be such a struggle for peace that there will be no stone unturned. They even refer to human rights, heavily criticised from the Russian ultra-conservative viewpoint otherwise. The methods may differ, but the goal is universal: the lost colonies must be regained, even as a carcass.

They allocated as much as four million rubles (Estimate, DOC) for making a clip titled “No War” where pseudo-pacifism masks defeatism. In the  funding request they clearly state that any national culture is perceived by the authors of the project as a manifestation of “Russophobia”.  The recipient of the funds  was the Baltic Youth Association “Juvenis”; the project managers: Alexey Rimantovich Greychus and Ludwik Volkhonsky from Vilnius. Informational support of the project is provided by Lithuanian newspapers Obzor and Kurier. Antonina Zimina oversees human rights of Russian-speakers and other “Eurasian values” in Lithuania:

“There is an opportunity to organize a presentation of the Gorchakov Fund in Vilnius at the Independent Center for Human Rights www.nztc.lt in order to provide Russian compatriots with comprehensive legal and other necessary support in cases of violation of their rights, freedoms and legitimate interests in accordance with generally recognized principles and norms of international law on human rights. The organization will provide a meeting room for 50 people and invite Russian-speaking students and NGO activists. The leaders and activists of the NGO “Vitis” in Kaunas also show interest in cooperation. The organization promotes the Eurasian values ​​in Lithuania. The organizer of the event form the Lithuanian side is a participant of the “Baltic Dialogue 2012” Edikas Jagelavičius. The planned date of the event is August 23, 2014. Travel and accommodation expenses will include tickets for a bus from 1000 to 1400 rubles (depending on the date of purchase and route), the economy hotel rooms on average from 30 to 40 euros.” 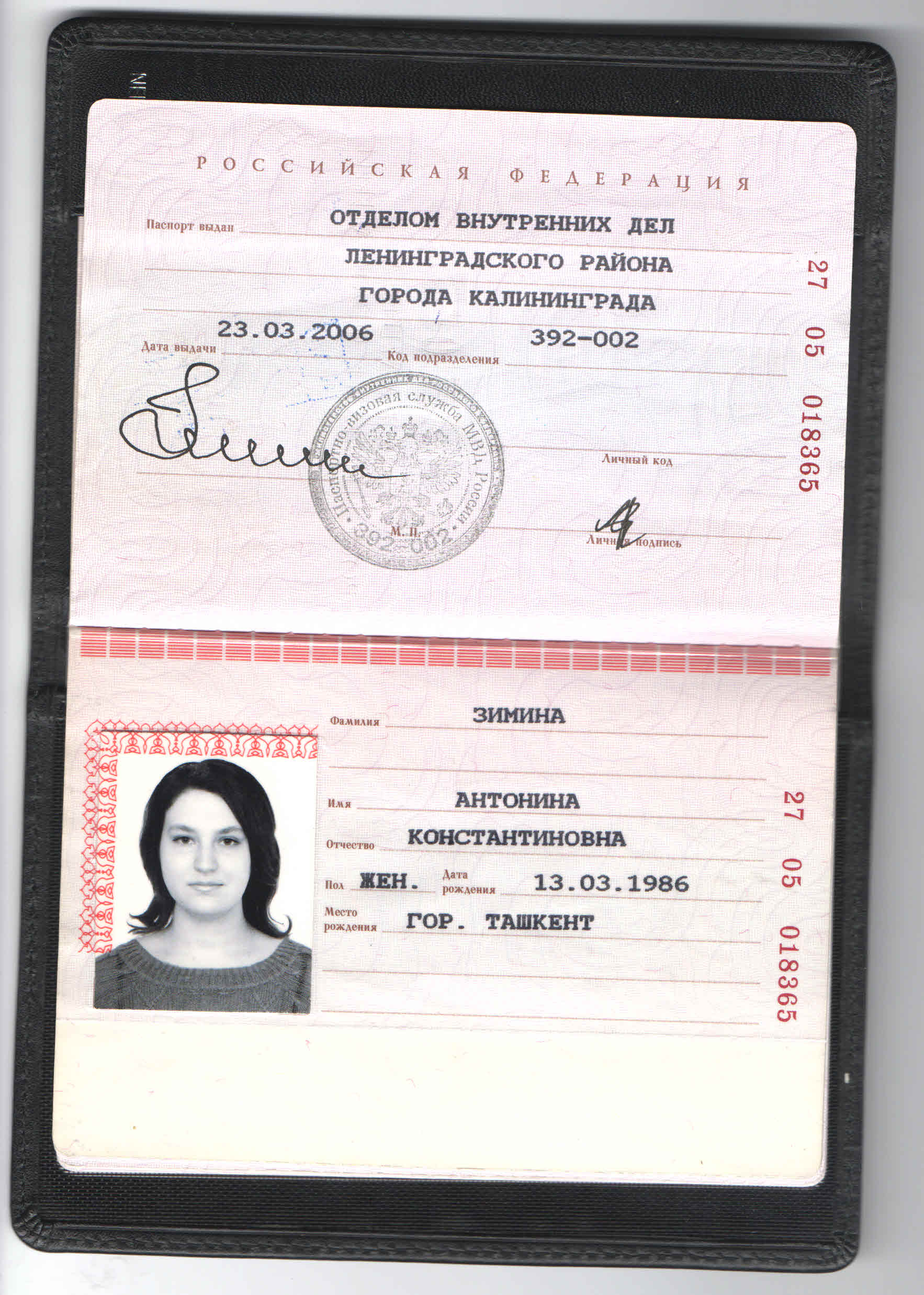 To strengthen its influence in Central Europe and the countries of the former USSR, the Russian Federation uses the methods already tested in the war with Ukraine: intensive blackmail; direct financing of marginal pro-Russian parties by state-owned Russian companies; pseudo-legal assistance to “compatriotes”; creeping federalization aimed at splitting the country on linguistic or economic basis; pseudo-pacifism that is supposed to mask defeatism; formation of pro-russian opposition to cover terrorist and separatist activities; any point of view different from the Russian one, is labeled as Russophobic. And the true sponsor of this activity in Europe is directly the Russian government hiding behind supposedly independent non-profit organizations.

Disclaimer: Data for the investigation was provided to InformNapalm by UCA hacktivists on an exclusive basis. The InformNapalm Community bears no responsibility for the way the information was obtained. We analyze and supplement materials based on open source intelligence

Material for publication prepared by Sean Brian Townsend especially for InformNapalm. Translated Volodymyr Bogdanov, edited by Svitlana Kemblowski. When using information, an active link to the source is required.
(Creative Commons – Attribution 4.0 International – CC BY 4.0) Press the repost and share with friends.
Subscribe to InformNapalm community pages in Facebook / Twitter and  Telegram  get quick information about new materials.

No Responses to “Aggressive Russian “soft power” in Europe”