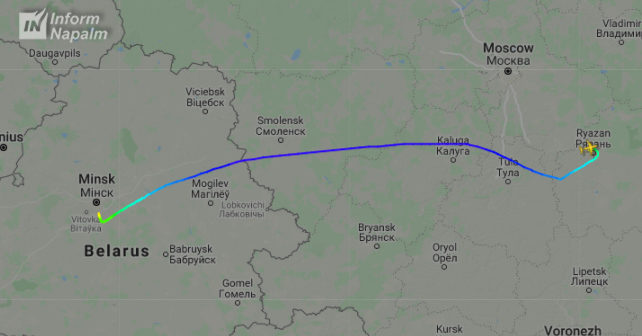 Against the background of continuing mass protests in Belarus and the dramatic socio-political situation in the country, on August 14, 2020 volunteers of InformNapalm international intelligence community tracked on FlightRadar the movement of the Belarusian Air Force , tail number EW-005DE. The flight was recorded outbound from Minsk to the Russian Dyagilevo Air Base (3 km from Ryazan) in the morning, returning to Minsk in the afternoon.

Interestingly, on August 12, the same aircraft made 3 flights, Novosibirsk and Kubinka Military Airfield near Moscow being among the destinations.

On the the next day, August 13, the YouTube channel of the Ministry of Defense of the Russian Federation showed a short video of the arrival of the Belarusian military transport aircraft IL-76MD with the tail number EW-005DE to Novosibirsk with a caption:
“Belarusian team arriving in Novosibirsk to participate in the international stage of the Excellence in Military Intelligence Army-2020 competition. Upon arrival, the servicemen were escorted to the territory of the Novosibirsk Higher Military Command School, where the competitions will take place. The opening ceremony will be held on August 23.”

We have grounds to believe that this video may be a cover story made up by the Russian Federation to avert unwelcome attention of journalists to this flight. Such an early arrival of the team, 10 days before the official start of the competition, is unusual.

At the same time, the flight of the same plane to the Kubinka Military Airfield near Moscow has not been commented on. We will remind that the 45th Special Forces Brigade (military unit 28337) is based in Kubinka. This is the special ops unit of the Airborne Troops of the Russian Armed Forces in the Western Military District. The servicemen of this unit took an active part in the operation to capture Crimea and the war against Ukraine in the Donbas.

The flight on August 14 from Minsk to the Russian air base near Ryazan and back also leaves us with a lot of questions. Ryazan is home to the Ryazan Higher Airborne Command School, the only military educational institution in the Russian Federation that specializes in training officers for airborne troops. Ryazan is also called the “capital of Russian airborne troops.”

So far, we can only guess what cargo was airlifted from Minsk to Russia or more importantly back to Minsk, or who were the passengers aboard this Belarusian military transport. It should be noted that IL-76MD is designed for parachute and on-ground landing of personnel, military equipment, cargo, fuel and containers.

On August 12, InformNapalm volunteers also recorded the arrival in Belarus of two charter flights of the Russian Air Force airplanes. 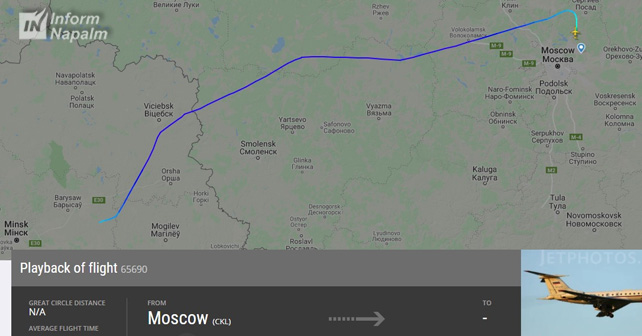 Videos of the redeployment of the Russian heavy military equipment and MLRS to the borders of Belarus have also spread on the Internet.

It is possible that Vladimir Putin has reached some form of agreement with the regime of Alexander Lukashenko, and these flights indicate either the transfer of additional forces or assets to suppress civil protests in Belarus, or are part of preparations for the invasion under the guise of Russian “peace keepers” within the Collective Security Treaty Organization (CSTO) agreements.

Media preparation of aggression against Belarus

For example, on August 14, the head of Russia Today, Margarita Simonyan, floated to the Russian public an idea of Russia’s invasion of Belarus. Both on her Twitter and Facebook pages, she wrote that it was time for the “polite men” to “restore order”, hinting at the invasion of the Russian troops without insignia to the Ukrainian Crimea. Obviously, such statements have been carefully timed and constitute a threat to the territorial integrity of Belarus.