“Best” GRU subversives of the 346th Brigade caught in Horlivka 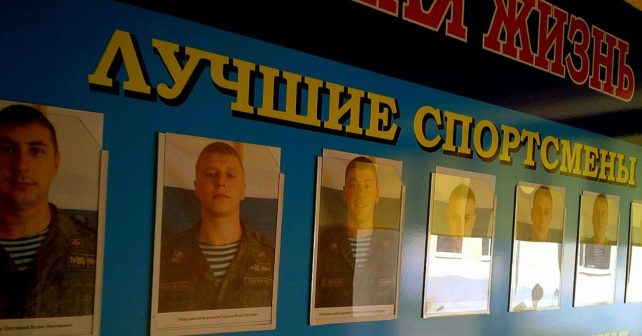 It’s official – scout snipers of the 346th Special Forces Brigade are in Ukraine.

Based on 8 months of observations, InformNapalm volunteer intelligence community obtained compelling evidence of the presence of servicemen from the 346th Special Forces Brigade of the Main Intelligence Directorate (GRU) in the city of Horlivka (Donetsk Oblast).

In early February 2016, the photos of a Russian serviceman were found against the background of fur trees and a portion of the old Soviet sprinkler system visible under them. At that time it was not possible to identify the exact shooting location.

It looks like having left the occupied part of Donbas, Sergei Tantsyura could no longer hold his urge to boast his “exploits”. On July 21, 2016, he posted a comment to one of his photos: “Horlivka)” (there is a photo dated 01.02.2016 in our archive, indicating surname Tantsyura; on 03.09.2016 it was already changed to Shamurzayev). 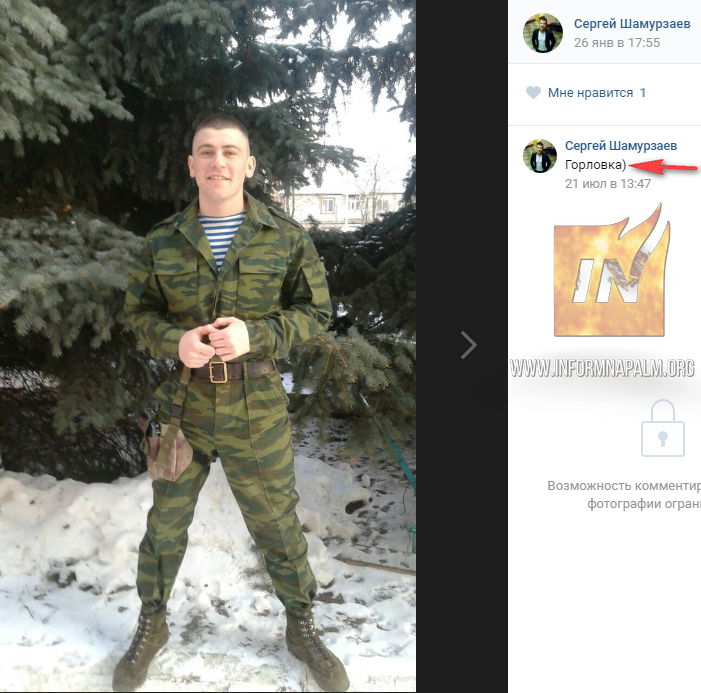 Later on, one more series of photos appeared in Sergei Tantsyura’s account. Our readers helped us establish that these photos were taken in the courtyard of the former Organized Crime Section (OBOP) of the police headquarters in Horlivka in Donetsk Oblast.

It is worth mentioning that in February 2016 a professional serviceman of the 33rd Motorized Rifle (Mountain) Brigade (49th Army of the Southern Military District of Russia, military unit 22179, home station in Maikop, Adygea) was spotted on the roof of the OBOP building in Horlivka. Earlier, in December 2015, InformNapalm volunteer intelligence community identified the photo taken on the roof of the same building by another Russian serviceman, from the 22th Separate Special Operations Brigade of GRU. In less than a year, soldiers from three different special operations brigades of the Russian Armed Forces were spotted in the same building. “Coincidence? Don’t think so”. Apparently, it has become a tradition of sorts.

We suggest that all the other Russian Army brigades staying on the occupied Donbas territory also check-in at Horlivka OBOP. Please send us your and your friends’ photos/videos in any convenient way via our Contact ussection; we guarantee your anonymity.

In the account of Ilya Godunov, a colleague of Sergei Tantsyura, we found a photo sporting the “best” scout snipers. The photo of the wall of shame is most likely to have been taken at the home station of the 346th Special Forces Brigade of GRU (military unit 31681, Prokhladny, Kabardino-Balkaria).

Sergei Vladimirovich Tantsyura is a Russian contract soldier, a scout sniper of the subversive and reconnaissance unit of the 346th Special Forces Brigade of GRU. Spotted in Ukraine.

It is confirmed by the following photo. The sandbagged window strikes the eye. 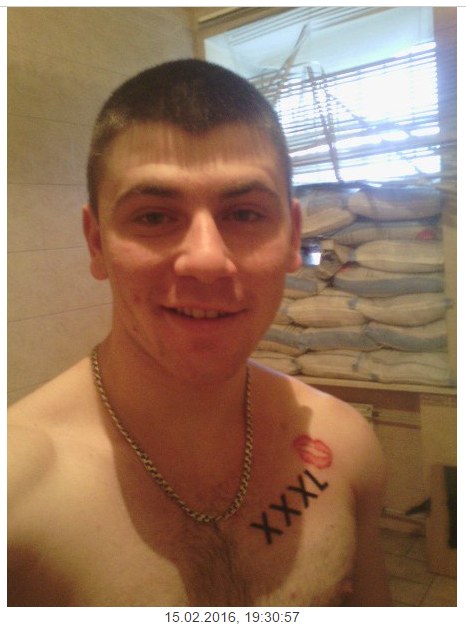 Photo from InformNapalm archive. The caption indicates the date when it was posted.

Maxim Degtyarenko is a Russian contract soldier, a scout sniper of the subversive and reconnaissance unit of the 346th Special Forces Brigade of GRU. Born on September 8, 1994 (or 1995). He was also spotted in Ukraine.

The photo clearly shows the chevron of the 22th Separate Special Operations Brigade of GRU (military unit 11659, home station in Stepnoy, Rostov Oblast). By now, Maxim Degtyarenko has most likely been transferred to the 346th Special Forces Brigade of GRU, as evidenced by his contacts and communication with the above servicemen. 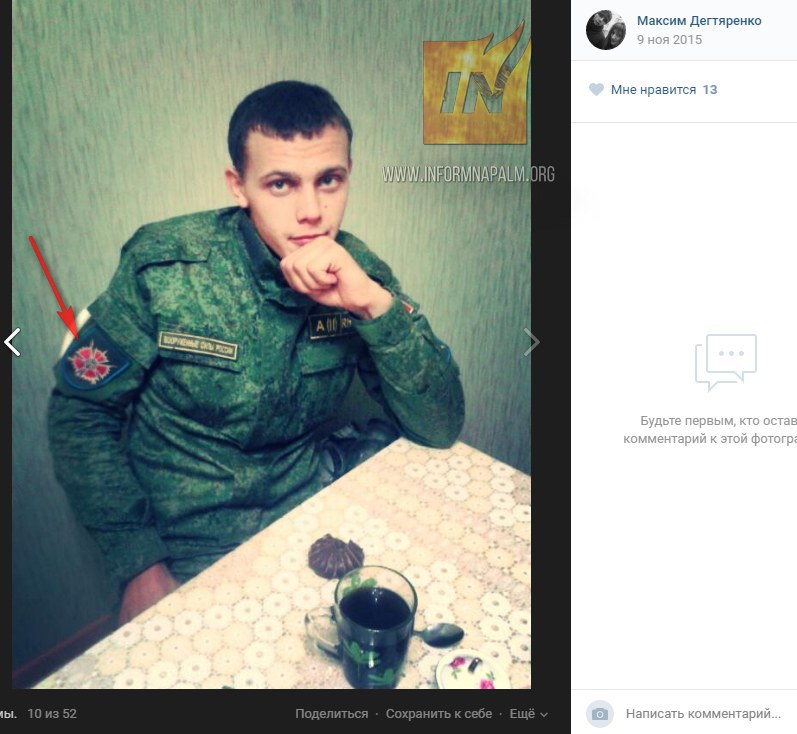 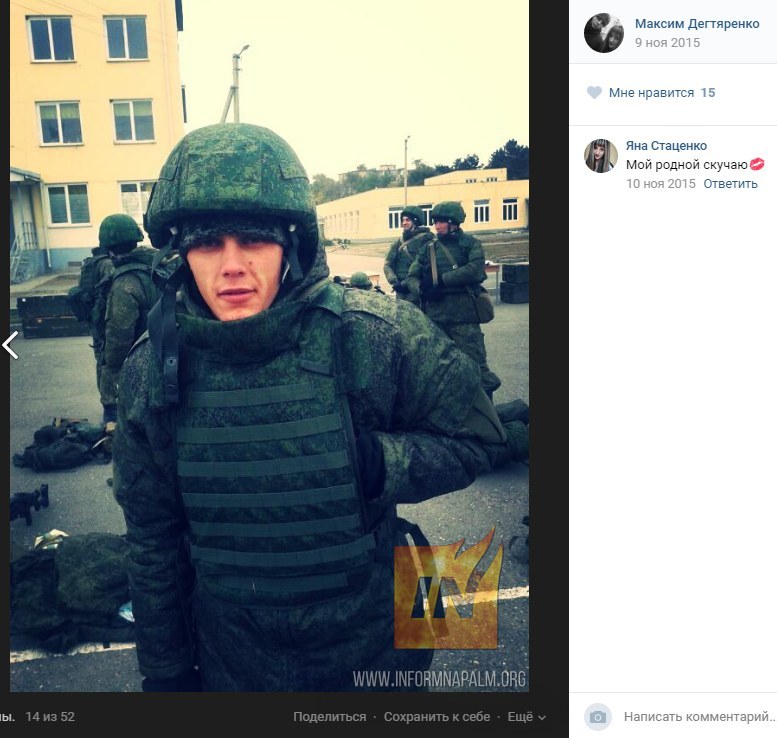 Maxim Degtyarenko gave himself away in Horlivka by keeping geolocation on his smartphone switched on. The shooting location matches the address of former OBOP building. 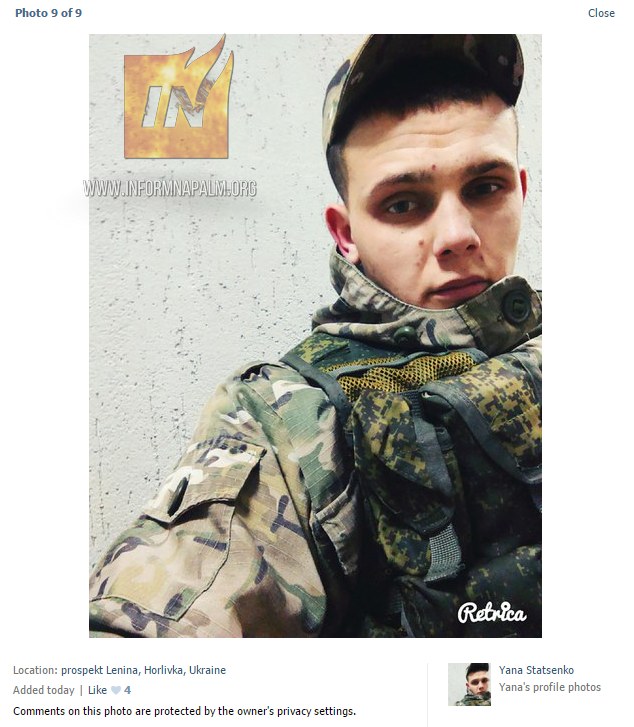 And again, we see the photo against the background of the sandbagged window, the bags are of the same coloring as in the above Sergei Tantsyura’s photo. These findings show that this group of the Russian GRU servicemen was in Horlivka at least from January to March 2016. 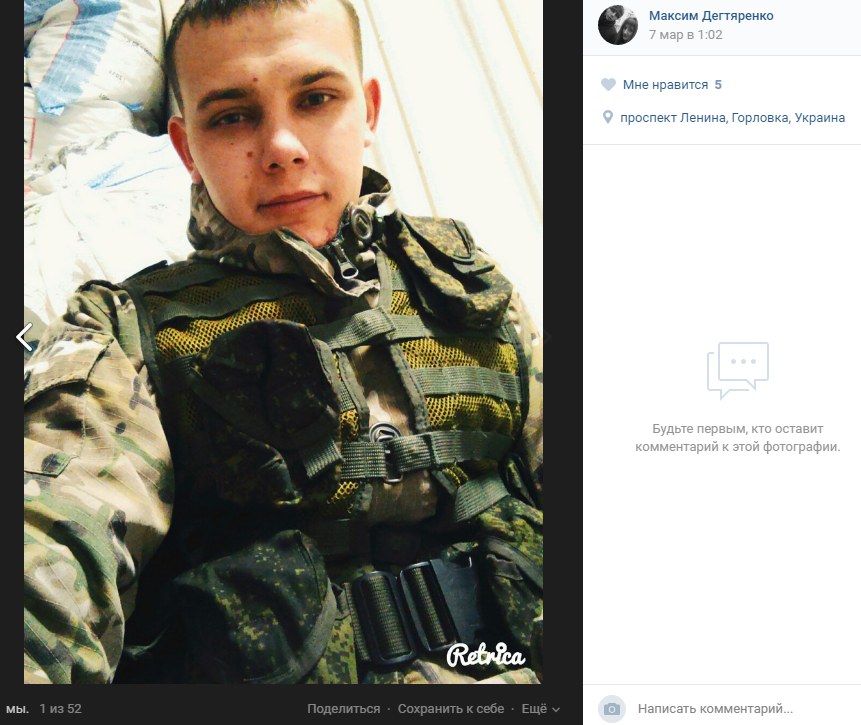 Yana Statsenko is the wife of Maxim Degtyarenko. She missed her husband so much, that she came to see him in Horlivka, thus reconfirming his illegal presence in Ukraine by geolocating her own photos. 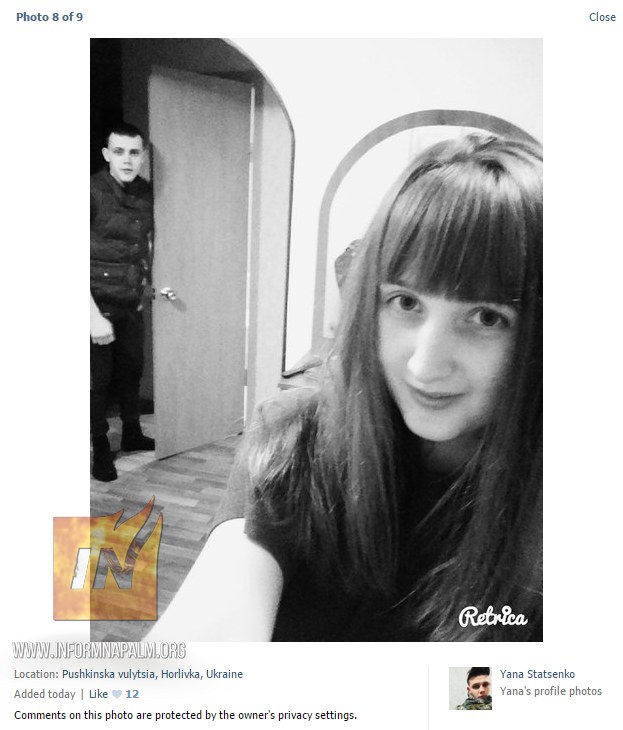 Here is a recent photo of Maxim Degtyarenko with his wife in Ekaterinogradskaya village, which is only a few kilometers from Prokhladny (location of military unit 31681, home station of the 346th Special Forces Brigade of GRU). 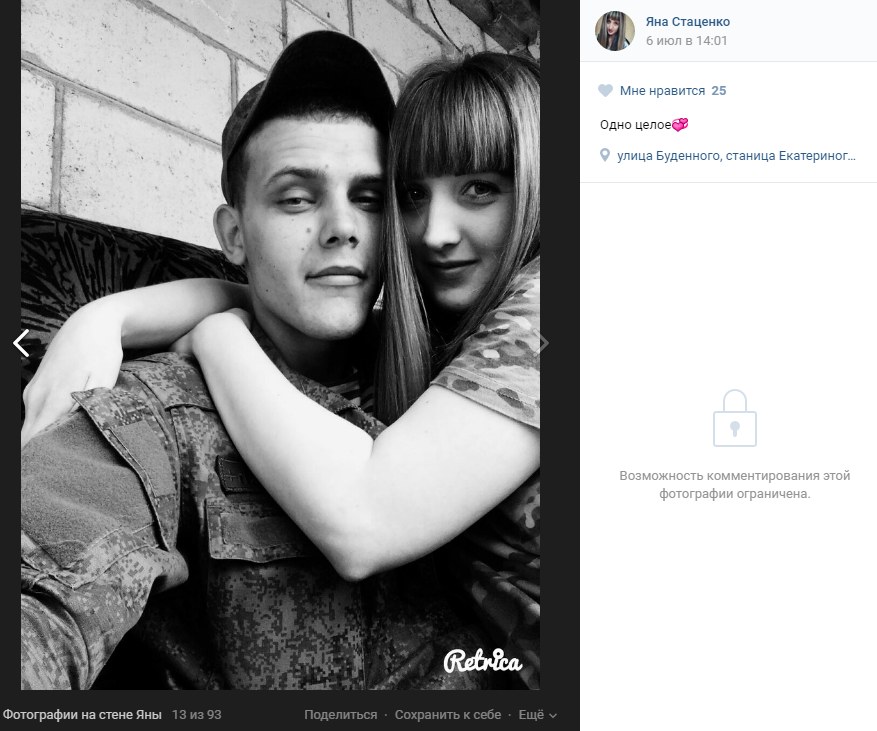 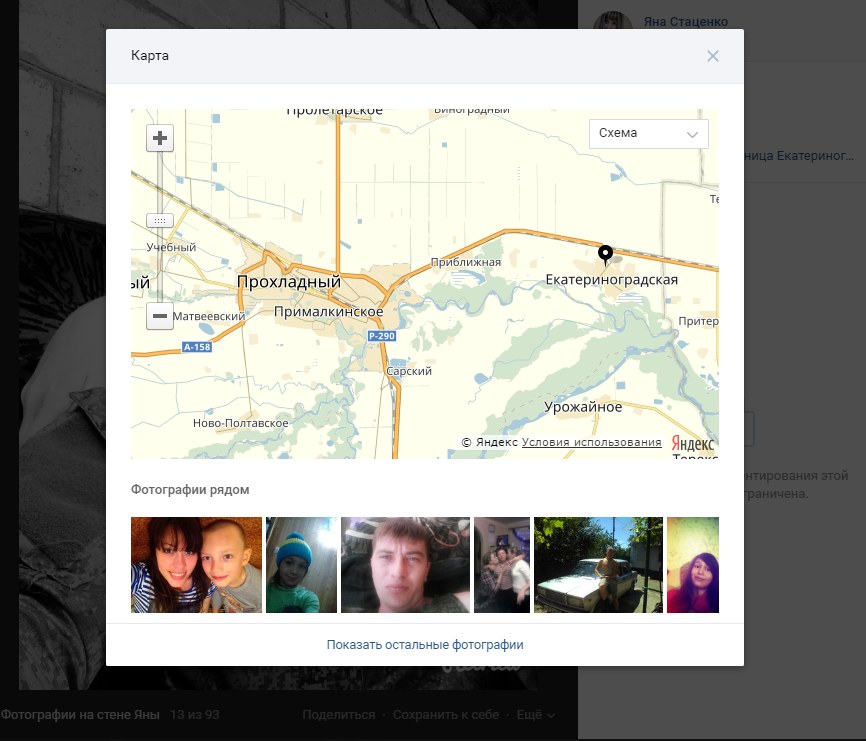 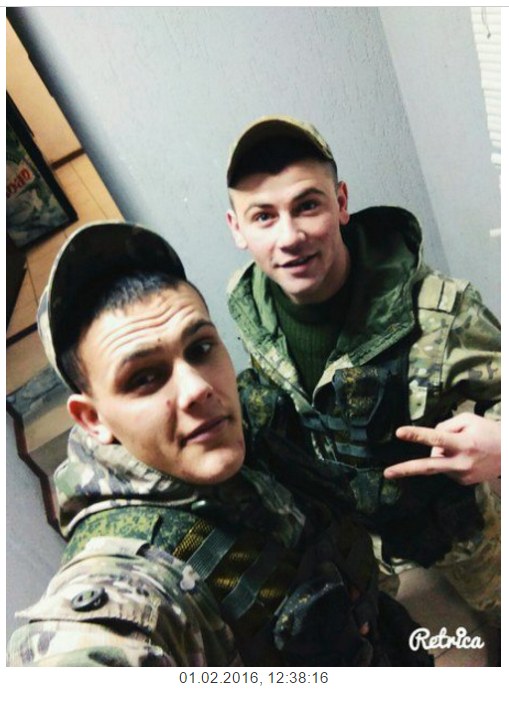 Photo from InformNapalm archive. The caption indicates the date when it was posted.

Ilya Sergeyevich Godunov is a Russian contract soldier, a scout sniper of the subversive and reconnaissance unit of the 346th Special Forces Brigade of GRU. Spotted on the Ukrainian-Russian border. He is second from the left on the “wall of shame” in the photo above.

Here is the photo of Ilya Godunov on the premises of the military unit 31681, stationed in Prokhladny, Kabardino-Balkaria. 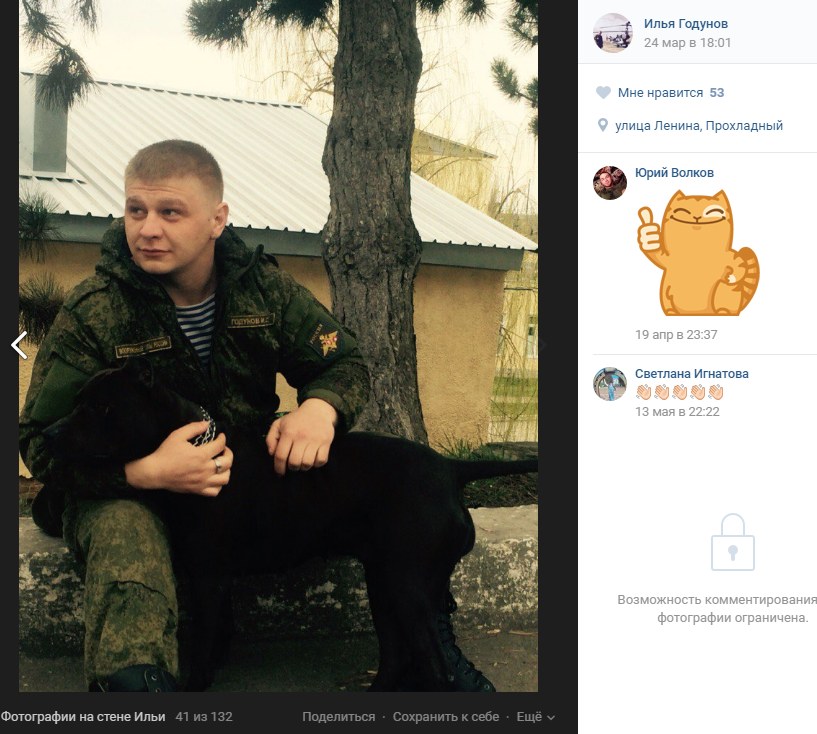 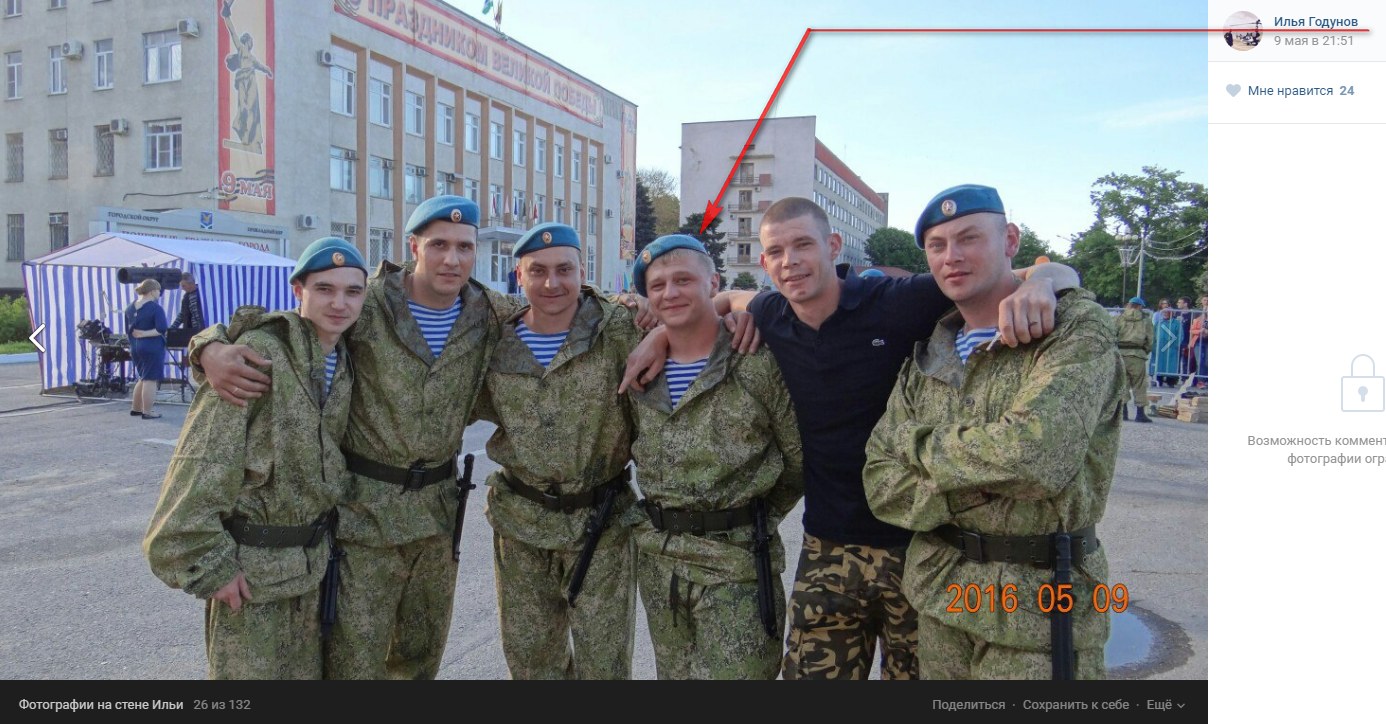 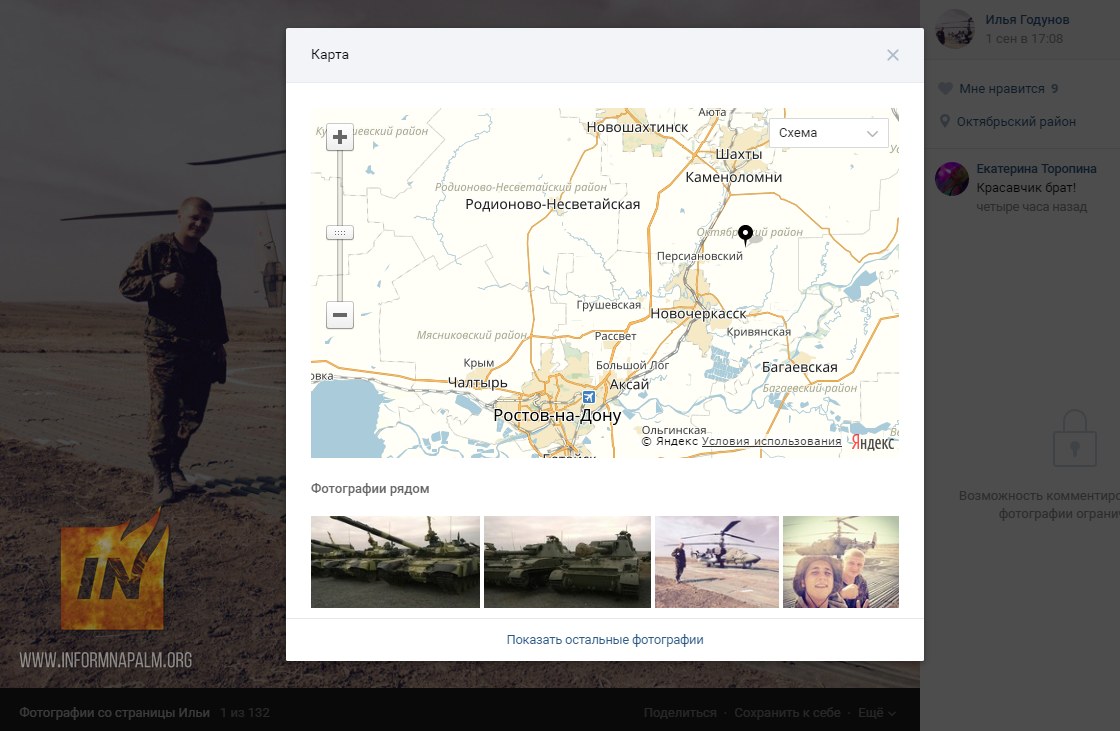 In the photo below, two blood brothers are pictured in the Donetsk airport, the exact year of shooting is unknown.

Right – Dmitri Sergeyevich Sheludko, born on 08.20.1982 in Horlivka. Now he is a pastor at Probuzhdeniye (Revival) protestant church in Moscow. 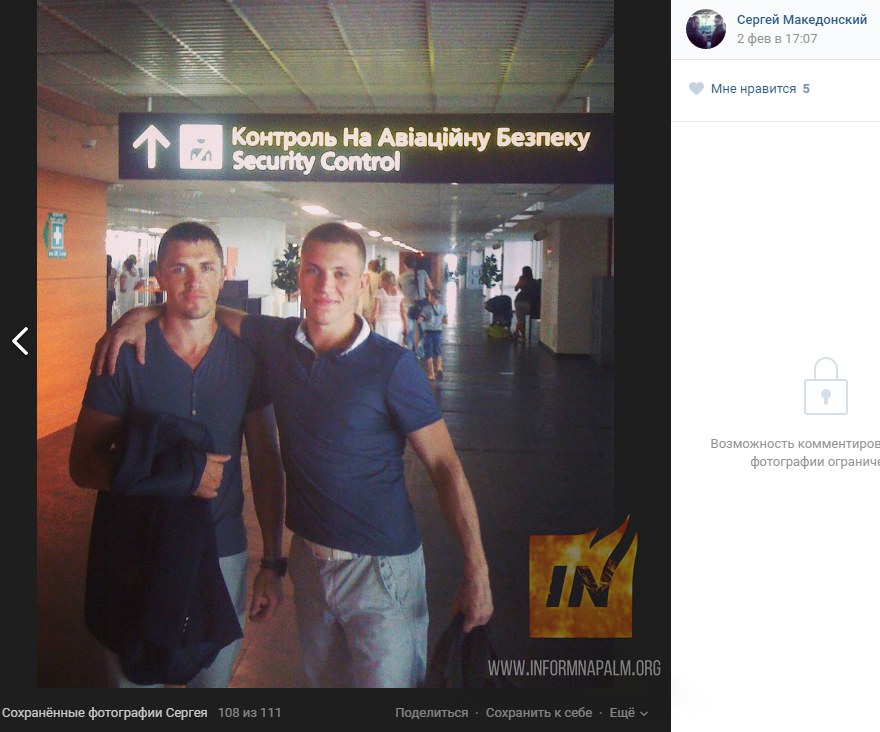 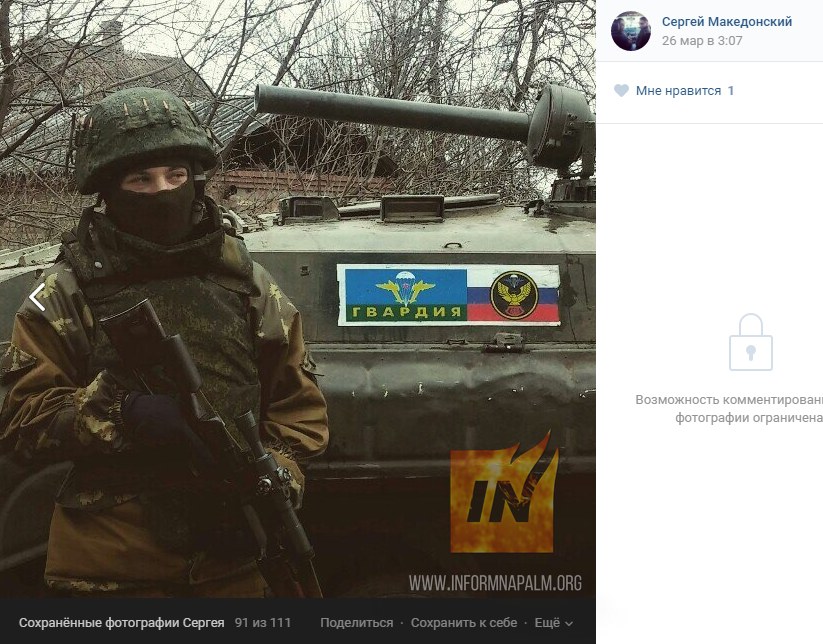 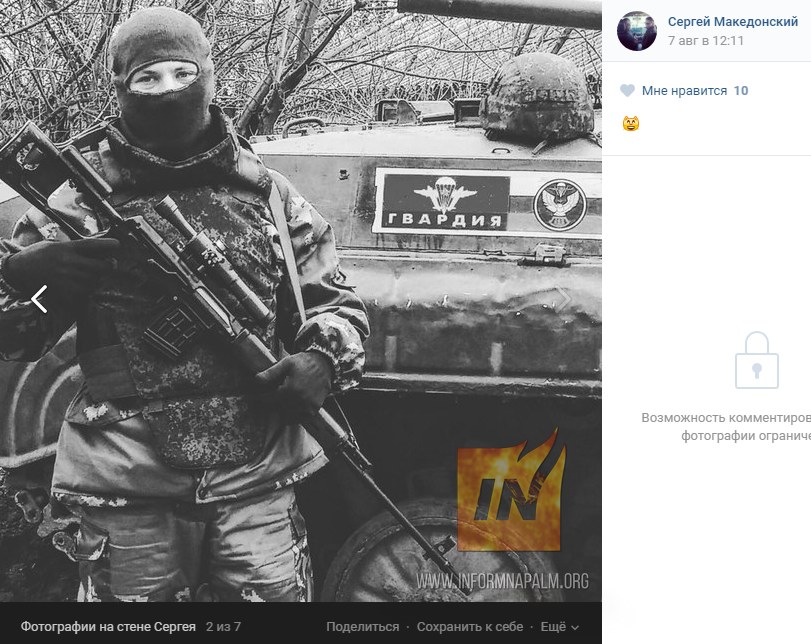 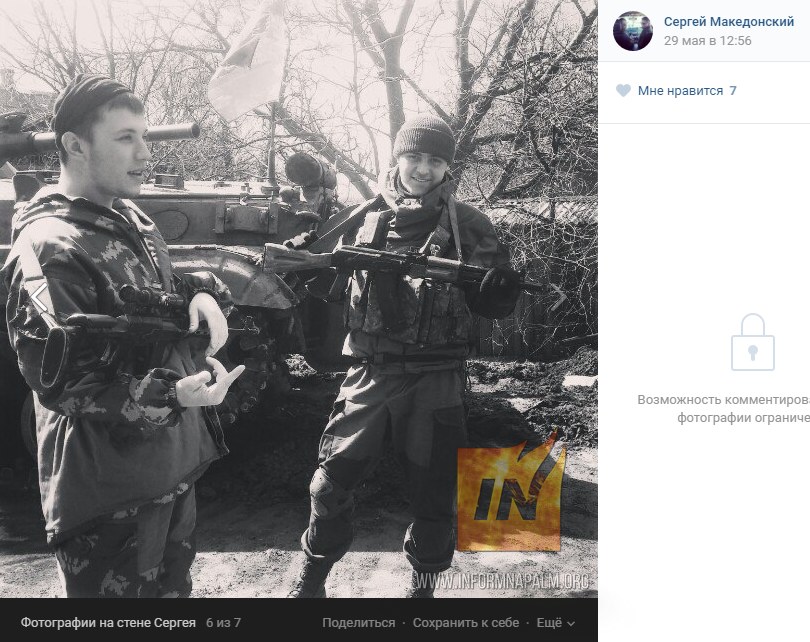 Winter 2015/2016, at the contact line in Ukraine. The photo shows Artemovsk Raion stele visible in the distance, near the settlement of Holmivskyi (we are grateful to @5urpher for identifying the location ). 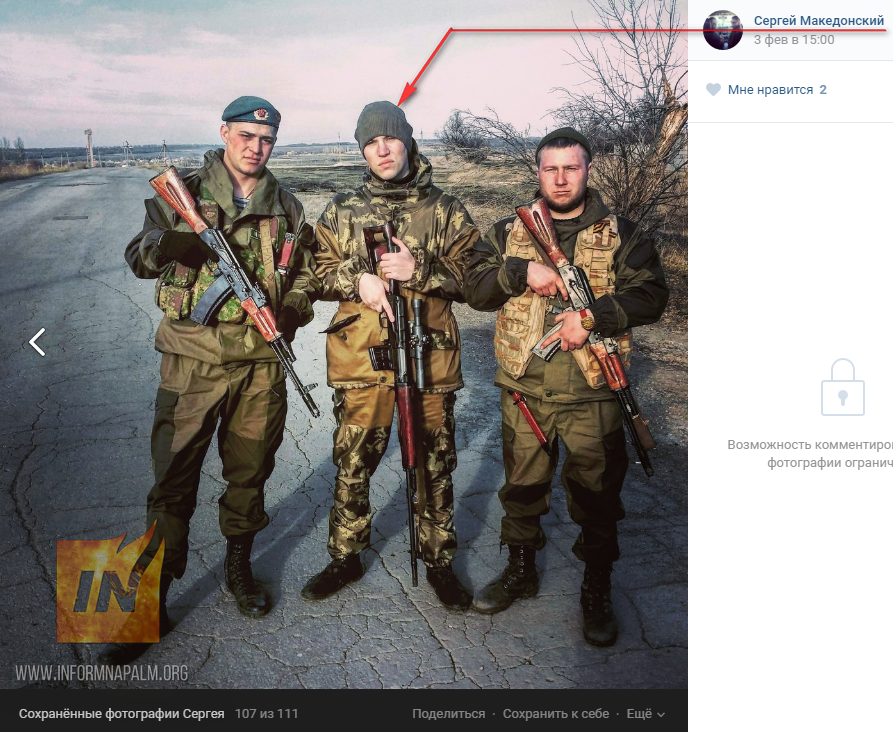 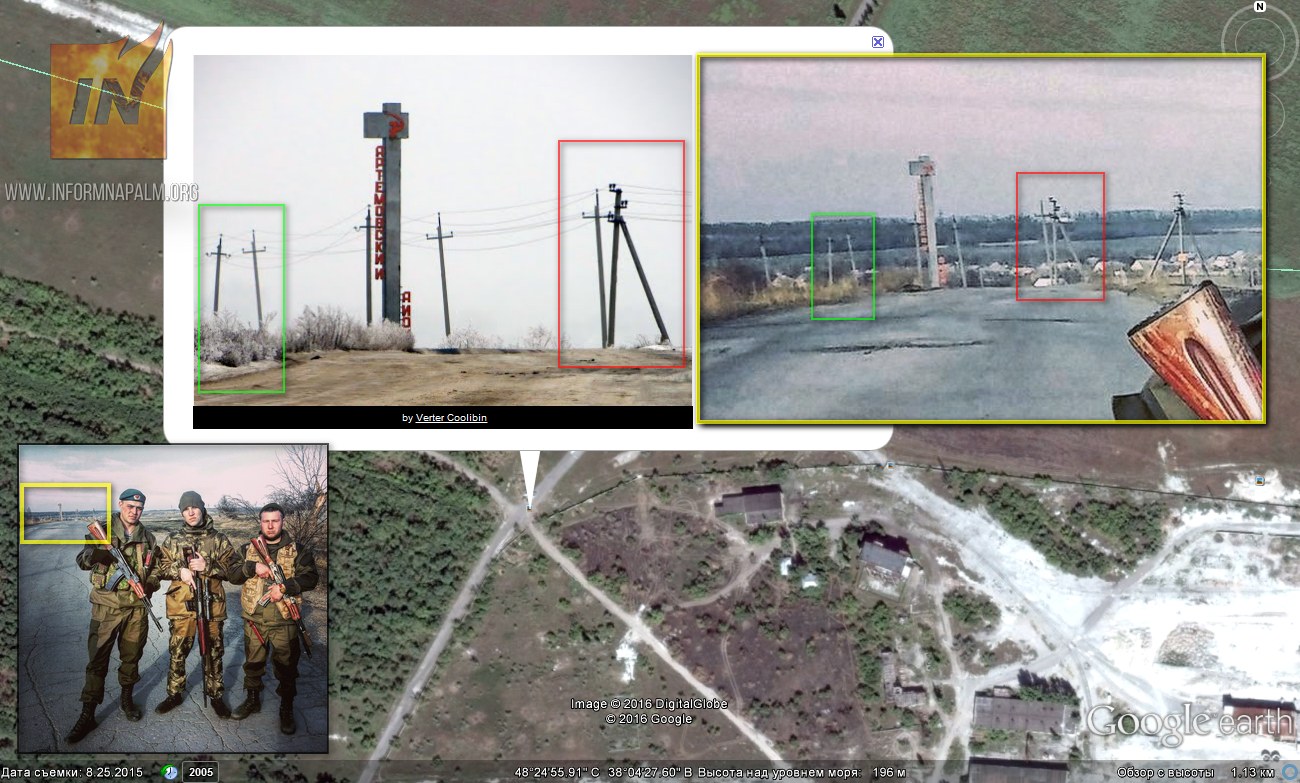 The location is marked with the green circle on the map from liveuamap.com. 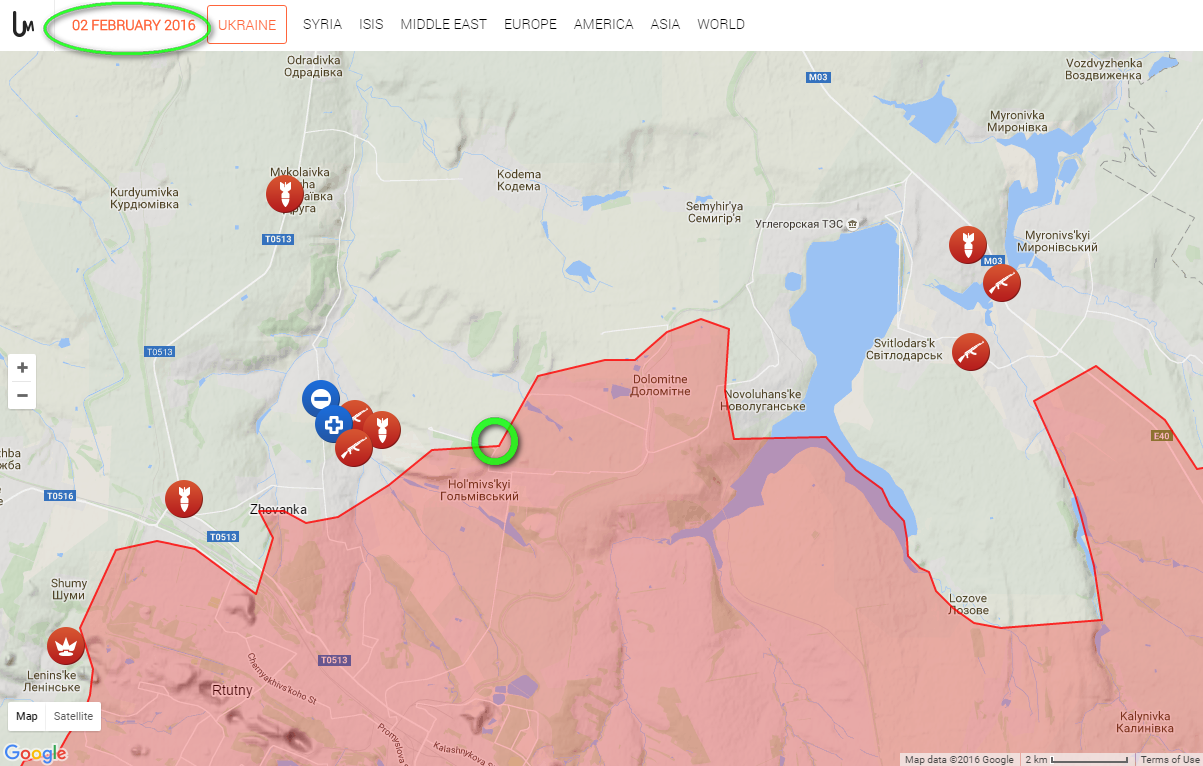 Here below, is the most interesting photo featuring Horlivka separatist sniper Sergei Sheludko together with the above-mentioned Russian scout sniper Ilya Godunov from the 346th Special Forces Brigade of GRU. The shooting location has not been identified. Was it taken in Russia or in Ukraine? We are looking for clues. 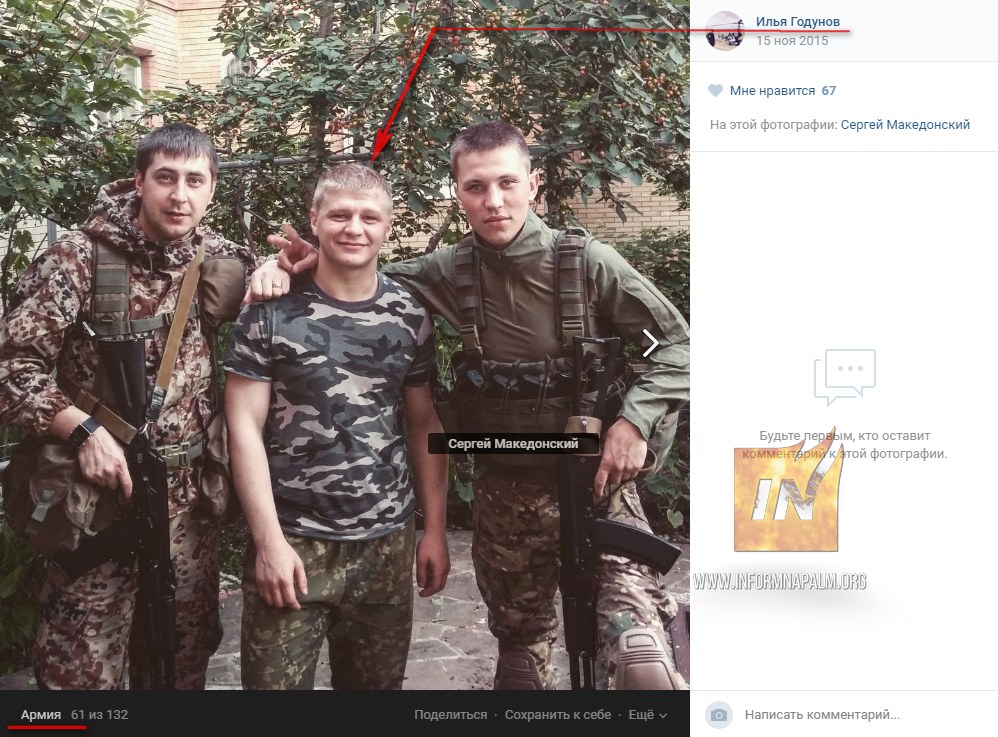 It is worth reminding that, apart from the whole units, groups and individual contract servicemen from the Russian Ground and Airborne Forces, InformNapalm has repeatedly documented the GRU special operations units in Donbas. Read more:

This publication was prepared by Vidal Sorokin