Established: crew of the Russian guided missile corvette Shtil participated in the aggression against Ukraine 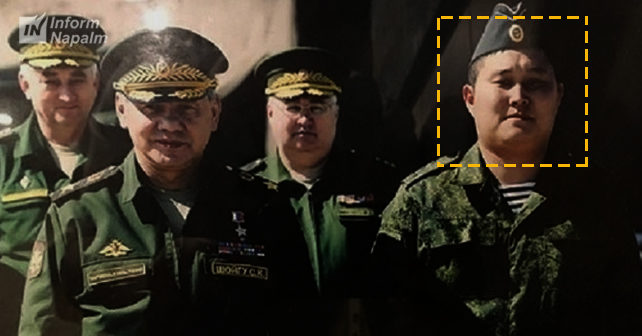 The participation of the crew of the Russian guided missile corvette (GMC) Shtil in the aggression against Ukraine has been established. This ship was involved in blocking the ships of the Ukrainian Navy in Donuzlav Bay. The list of (1, 2) of the military officers the Russian Federation who were served charges by the Main Military Prosecutor’s Office of Ukraine currently does not contain the commanding officer of GMC Shtil. This corvette has not been included on the list of the Military Prosecutor’s Office among the ships involved in the aggression against Ukraine. We urge the Ukrainian law enforcement agencies to carry out all the appropriate legal proceedings regarding the invaders in accordance with Ukrainian and international law and submit their data to Interpol.

It has been 28 years since the collapse of the USSR. In this relatively short time, Russia has launched several wars against neighboring post-soviet countries. The criminal decisions of the Russian political elite have been carried out by ordinary Russian citizens – conscripts, contract soldiers, officers of the Russian Armed Forces, mercenaries of private military companies and militants of numerous paramilitary groups. They received military ranks, awards, and benefits for the execution of the criminal orders and then boasted them on social media. They are being made into heroes by Russian propagandists for the sake of bringing up new generations of combatants for new wars. That is the only reason why Yunarmiya was created in Russia as a modern version of Hitler Youth.

The publications of propagandists and social media posts of the direct war crime perpetrators have been for over six years providing open-source data to InformNapalm volunteers who are consistently gathering evidence for the International Criminal Court. This feature looks into the role of the guided missile corvette Shtil (Project 1234.1 Ovod-1, pennant number 620) from the 166th Small Missile Ships Squadron of the 41 Russian Black Sea Fleet Brigade (military unit 72165, stationed in Sevastopol, temporarily occupied Crimea).

Rewards and promotions for military crimes

In 2013, the commander of the GMC Shtil Vladimir Derbetov, a native of the Kalmyk city of Lagan, held the rank of lieutenant commander. 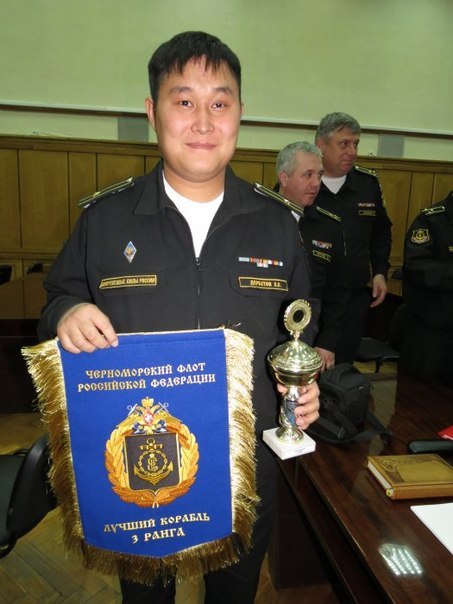 After participating in the special operation to capture Crimea, he received an early promotion to the captain of the 3rd rank and was awarded a Medal of Ushakov. He was also awarded a Medal of Admiral Gorshkov, enjoys the status of a “war veteran” and has a note of acknowledgment from Putin. 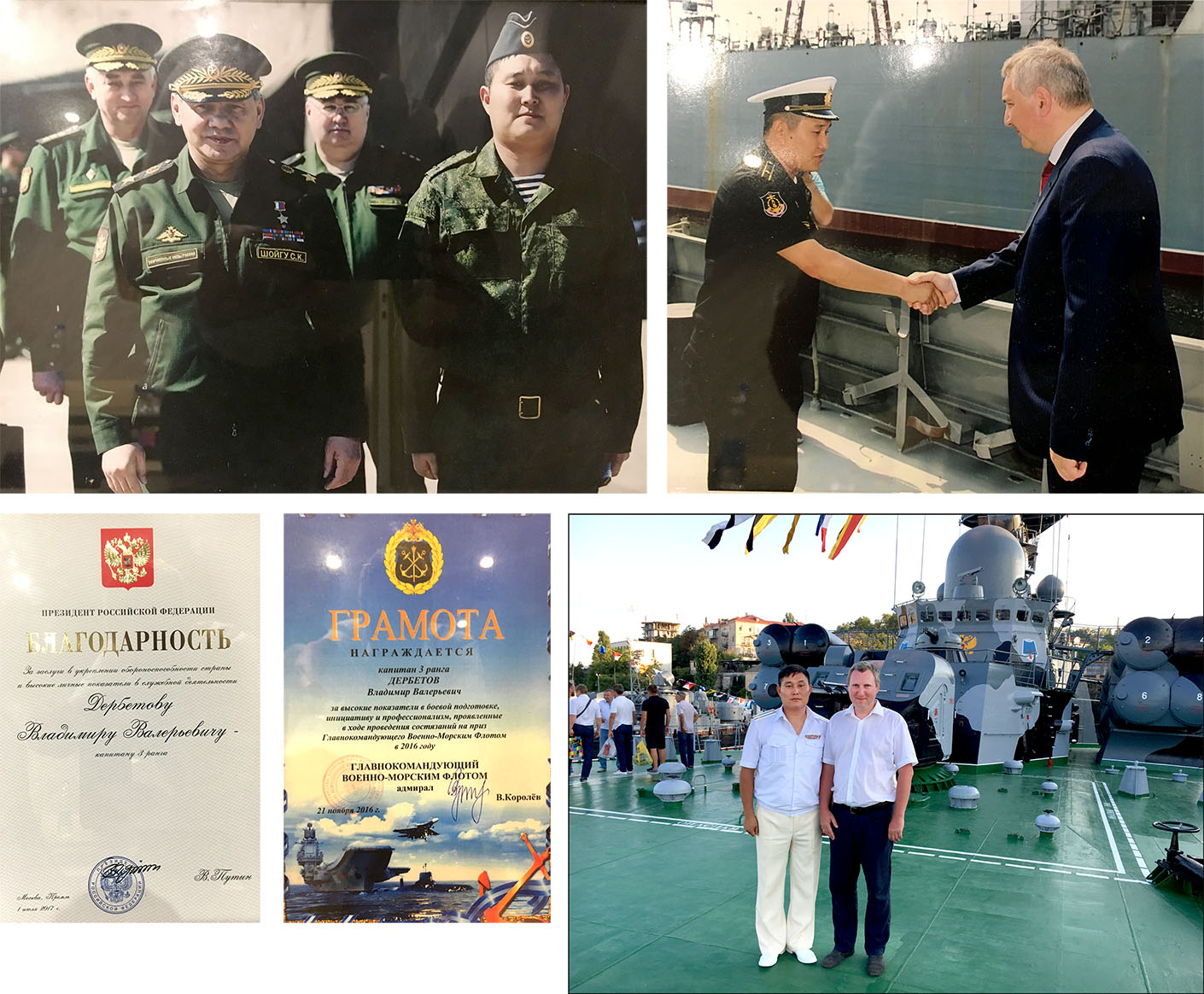 From 2015 to 2017, he was in command of GMC Zeleny Dol, whereas his ship performed combat missions in Syria. After this period, GMC Zeleny Dol became a part of the Baltic Fleet, and Derbetov was appointed commanding officer of hoverborne guided missile corvette Samum. As of May 2018, his rank has been identified as captain of the 2nd rank.

In 2016, Derbetov, as the commander of GMC Zeleny Dol, was added to the Myrotvorets Center database.

On Russian social networks, we found sailors who participated in the special operation to capture Crimea as part of the crew of GMC Shtil.

Mikheyev also posted several videos on his page from the indictable period of service that can be used for identification of other sailors who participated in the aggression (video links: 1 , 2; archive – in case of the evidence is removed by the defendant). One of the videos shows sailors of GMC Shtil, the other shows Mikheyev arriving by train after his discharge from the navy. On the freeze frame, a shoulder patch of GMC Shtil is clearly visible, worn by one of the subjects of our investigation.

Dmitry Doras, born April 14, 1994, in Stavropol city, Russian Federation. He was found on the contact list of Mikheyev.

The following photo from the album of Doras may look uninformative at first glance, but it turned out it showed characteristic elements of GMC Shtil.

Here is a comparison with photos of the ship found online.

Doras pictured with a medal for the occupation of Crimea.

In 2014, GMC Shtil was among the vessels that blocked Ukrainian ships in the Donuzlav Bay. It should be noted that the participation in the special operation to capture Crimea was not the first war crime for the crew of this ship. In 2008, GMC Shtil participated in the war against Georgia. Since 2009, on an ongoing basis, the ship was on combat duty off the coast of Abkhazia occupied by the Russians.

There are interesting comments on the Sevastopol Forum that illustrate the situation not only on GMC Shtil, but also in the Russian navy as a whole.

In 2016, a Russian from the Urals region received a referral to serve on GMC Shtil and sought local advice on Sevastopol Forum:

“Good afternoon, dear forum users! Need your support! I got a referral to GMC Shtil. I myself am from the Urals, 32 years old, higher education, have a family, children. … At the moment, the situation where I currently live is extremely unpleasant: salaries have been cut everywhere, layoffs are coming, there is a chance of being out of work. And then I got this chance to both fulfill my dream and somehow change my life, I hope for the better. However, after reading this forum thread (and not only), I am getting more and more doubts if it is it worth the while. It is great to dream, but I have a family to feed. After all, moving over 3,000 km is not a joke! The question is, what to expect from the very beginning and what are the future prospects? … “

“There is nowhere to live. No one is waiting here for you. They will give you a berth on a ship, then you search for rental housing for the family. Then no one lets you go off the ship. They demand you to have shoes and clothes, but they won’t give you anything, you buy it all from your own money. Then you do repairs at the shop at your own expense. Then your wife can’t stand it any longer and relocates to her mother’s…”

Project Ovod and “pistol at the temple”

The Ovod series of guided missile corvettes (or small missile ships in Soviet classification) were designed in the 1960s. These ships were initially to be classified as missile boats, but the commander-in-chief of the Soviet Navy, Admiral Sergey Gorshkov, specifically approved a new class for them that loosely fit the corvette class specifications in western terms. At the launch of the first Ovod project corvette he said an epic phrase: “These missile ships are a gun at the temple of [western] imperialism.”

As of 2019, 12 Ovod project corvettes were still in operation, the rest had been decommissioned because they were outdated morally and physically. Those that remain are in need of deep modernization, with naval officers saying that after the modernization only the hull and superstructure, as well as part of general ship systems could stay.

GMC Shtil is a project 1234.1 Ovod-1 vessel. The ship was launched in 1978. In the summer 2019, a photo the “stripping” process of the GMC Shtil appeared on the forums, that is of its equipment being removed from it before disposal.

In February 2020, GMC Shtil was decommissioned from the Russian Black Sea Fleet. However, the participation of its crews in the aggression against Ukraine and Georgia cannot be dismissed.

*If you are viewing this article in the Accelerated Mobile Page (AMP) mode, some of the links and pictures might not be displayed. If you are interested in the whole content of this page, we recommend viewing it on a PC or a laptop.

No Responses to “Established: crew of the Russian guided missile corvette Shtil participated in the aggression against Ukraine”