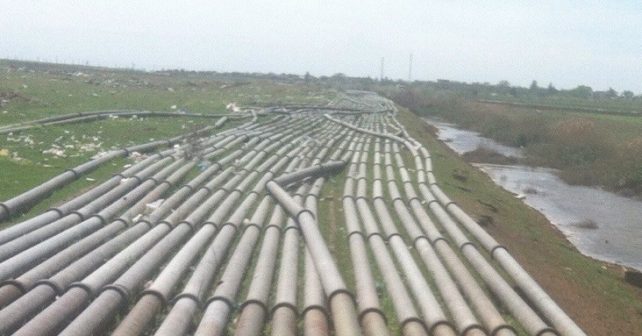 Much water has flowed under the bridges since the annexation of Crimea. It used to have a lot of problems and even more have appeared. However, such questions as “where to get food?” and “what to drink?” will never stop to haunt the minds of ordinary citizens and elite. The problem with food in the Crimea is more or less solved, but the water issue still remains urgent. Owning to the termination of the supply of the water from Dnieper by the North Crimean Canal, the population of Crimea, especially farmers living in the occupied peninsula are experiencing an acute need for water and have been forced to transition to the extraction of groundwater.

There are many opinions as to the presence or absence of water supply problems in Crimea. And still: Is there a problem with water in the Crimea? And who is to blame for the existing problems with the water supply? I think every Crimea’s inhabitant wants to get to the bottom of this issue. Thus, we offered the people who were visiting the mainland Ukraine from the peninsula to express their views on that issue. An anonymous survey at the checkpoints located in Kherson Region was conducted over three days. As a result 412 (71%) of the 584 respondents answered affirmative to the first question. Only 99 (17%) respondents claimed there were no issues with water supply, and 73 (12%) were undecided.

Amongst those 412 people who are confident that water supply issues exist in the Crimean Peninsula, 252 (61%) blame the Russian government, 101 (30%) – Ukrainian authorities, 59 (9%) – see the root of all evil in other causes, for example, in the “economic blockade” of the peninsula.

Let’s take a look at these issues. So, the peninsula has remained without water from the Dnieper river since the spring of 2014, when the uproar of the fireworks and the popular jubilation over the armed occupation called “Crimean Spring” were still going on. It was in the midst of all these events, when the representatives of the so-called militia and the charlatans of all stripes began to seize public facilities in the Autonomous Republic of Crimea. The pumping stations of the North Crimean Canal were no exception, and, under the pressure of Russian authorities, they were shut down with the rhetoric that Crimeans did not need the water from the “Bandera State”. “Let the Junta choke on their water,” they would say.

The loss of control over the North Crimean Canal’s facilities on the peninsula and the incompetence of those who captured them, were and still are the main reasons for the water supply problems of Crimea. The self-proclaimed Crimean authorities began to invent absolutely unbelievable solutions to the problem, such as the desalination of sea water or setting up water supply from Krasnodar Krai. To meet the needs of agriculture in the Crimea, people began to extract groundwater almost immediately. Since the beginning of the Crimea’s occupation the Ministry of Nature has issued 43 licenses for the extraction of groundwater for agricultural producers. But it was not enough. According to Sergei Bidanets, the “head of administration” of Perekop district, despite the fact that the “government” of the Crimea reacted to the problem of the villagers on time, with the onset of the heat and no access to water, the Crimea’s steppe areas turn into the parched desert, where it is impossible to grow even cattle feed. This means that the development of animal husbandry as an alternative remains questionable.

It still remains unclear if the situation with the water in the Eastern Crimea will improve after all the work promised by the head of the State Committee of Water Industry. Ihor Vail answered this question himself at that very meeting: “We have it, but it’s in the form of dead sediment, which cannot be taken.” Then, what are those costly operations being conducted for? The answer is obvious: it is done to calm the population. The important thing is not to solve the problem, but to create the impression of hard work.

Well, we’ll just need to wait and see. So far, there are not too many reasons for optimism in the “traditional Russian lands” that have been annexed by Russia.

While working on this article I came across an interesting piece of information on the Internet: the pipeline battalion of the logistics brigade of Eastern Military District of the Russian Federation was engaged to provide water to peninsula settlements in 2015. According to the military, about 300 soldiers and more than 90 units of military and special equipment were involved in the works to supply Crimea’s inhabitants with water. The soldiers of the pipeline battalion laid down 24 field pipelines with the total length of 288 km helping connect the Prostornenske water intake with the North Crimean Canal. And what was the result? It was amazing, you can even say exotic. Now the locals, when looking at the almost empty beds of irrigation canals, can see crooked 30-kilometer-long pipeline threads running uncovered on the ground under the open sky. They look and wonder, what wizards accomplished that and why? After all, there’s still too little water in the canals.

In reality, there is nothing to wonder about, because it was all done purely “the Russian way” – cheap and cheerful, using free labor represented by Buryat conscripts treated like guest workers and with the motto, “Russians always take care of their own!” It was built, reported, and forgotten. There is only one positive thing in all this – the local population will be able to utilize the pipes left unused by “Buryat pipeline layers” for their household needs.

And what about water?

Since the Crimean Peninsula is relatively poor for groundwater and that the occupation authorities are trying to solve the water supply problem by maximizing water extraction despite environmental regulations, a number of questions arises. How effective are the methods used by the local geniuses and their Kremlin curators? Will it be possible to fully solve the problem of water supply to Crimea without water from Dnieper? What consequences will it have for the environment and agriculture of the peninsula?

According to the head of Russian Ministry of Natural Resources Sergey Donskoy, as of May 5, 2016 the total content of liquid water reservoirs in the Crimea – the main sources of water supply of the eastern regions of the peninsula – is 35.8 million cubic meters, which is 5 million cubic meters less than it was last year. And to ensure reliable water supply of Kerch, Feodosia and Sudak districts, it is necessary to construct the first water supply canal. However, it is planned to be put it into operation no earlier than December, 2020.

The water from Tayganske and Belogorske local runoff reservoirs, which was previously used for irrigation, as well as newly built artesian wells have been used since 2014 to fill the Kerch peninsula reservoirs of household and potable water. It is worth mentioning, that transfer loss of drinking water along the bed of Biiuk-Karasu and North Crimean Canal reaches 18-28% (according to other sources, up to 50-60%). 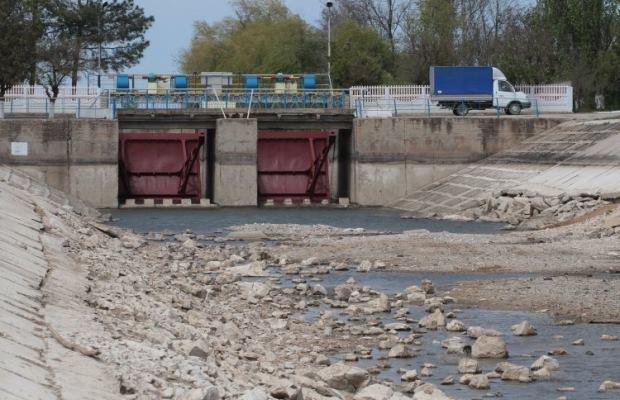 By now, because of Crimea’s switch to the local water supply sources, the agricultural sector of the peninsula has lost 90% of fresh water. The rice industry is already a thing of the past, and if there is no irrigation in the northern part of the Crimea for a few more years, the Yana Kapu (Krasnoperekopsk) and all of the Perekop district will have neither crops, nor vegetable production, nor animal husbandry.

Crimean tenant farmers started to disturb the geological balance of groundwater with the uncontrolled drilling of unauthorized wells. Previously it was the washing irrigation that allowed to maintain the soil in good condition. If nothing changes in the nearest future the real environmental disaster could begin in the peninsula.

In general, the present day situation with the Crimean water supply is very close to critical, because all measures being taken by the “new authorities” are unsystematic and can’t offer any real progress. Dredging and deepening of the reservoirs, increasing the share of underground water sources, construction of connector canals, etc. – all these are local measures that cannot have any global effect. Most of these measures are dictated by the political leadership and have no commonsense background. A striking example of this is the construction of a temporary pipeline from the Prostornenske and Nezhenske water intakes to the bed of the North Crimean Canal. It is no accident that the military was involved in that activity, otherwise the money would be stolen as a matter of course, the costs significantly overstated and the time limit exceeded. The technical side of this decision is highly questionable. In most cases, the water from underground sources is of a high quality and when it is drained into a canal the quality is lost so the water requires additional treatment.

According to official figures, Crimea’s water utility infrastructure wear reached 74.4% in 2013 and the loss in water supply systems was up to 20-25%. Given the heavy losses during the transport of water in the North Crimean Canal (20%), no more than 60% of the incoming water reaches users. To correct the situation, between 10 and 12 billion rubles are required by 2020. The plans also include the repair of about one third of the 1.5 thousand artesian wells already operating in the Crimea. Also it is necessary to drill an additional 150 wells. 5 billion rubles are required to fulfill those plans up to 2020.

“New authority” has found an easy solution for the problem of steppe Crimea – they ignore it. Just like they abandoned small settlements, which can’t be easily supplied with water in this situation. The major cities are the priority since what happens there is broadcast on TV. Most importantly, there is no time left for the implementation of long-term measures. And the things they still have time for will change nothing.

But the environmental factor is of no less importance. Well drilling to great depths, uncontrolled drilling, increased use of the existing wells, the disappearance of flow irrigation of agricultural land will certainly inflict tremendous damage to soils, aquifers, etc. Environmental damage of such barbaric approach is very difficult to assess. 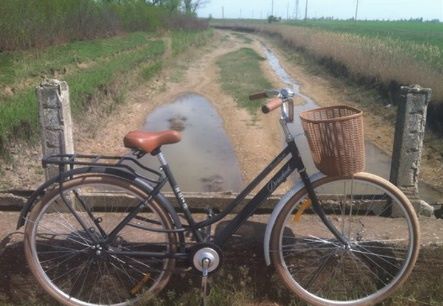 Thus, without the water from Dnieper, the Crimea will not die, but will be on the verge of a water disaster. To find the truth in this argument, it is necessary to understand the specifics of the natural environment in the region and to rewind time back to the life in Crimea before the construction of the North Crimean Canal. Catastrophic lack of water before the 1930s used to result in entire villages dying off during draughts. Water was brought in horse-drawn wagons and was allocated at the rate of one bucket of water per family. It was impossible to even think about any kind of farming. This is what North Crimean Canal was built to solve.

Just like North Crimean Canal once gave life to the peninsula, its drying out could take it away.