Karabakh and Donbas: parallel tracks of the Minsk process 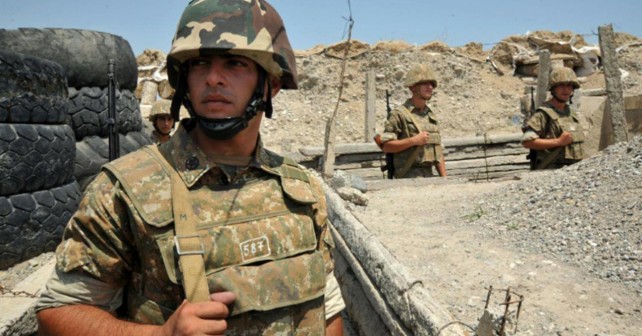 Since the morning of April 2 world news agencies have been widely covering an escalation of armed conflict between Armenia and Azerbaijan. Some media and commentators have gone as far as to suggest that a full-scale war, seemingly extinguished more than 20 years ago, has flared up again.

The roots of the conflict go back to the times of the late Soviet Union, when the crumbling empire could no longer hold back the parade of sovereignties in the territories of its constituent republics. Moreover, national aspirations and territorial disputes between nations were used in the power struggle between different factions in Moscow. The connivance and sometimes outright incitement by the Kremlin of the tensions in the Armenian-populated Nagorno-Karabakh Autonomous Region of the then soviet Azerbaijan grew into a bloody war in 1992-1994, which was then fought by independent Azerbaijan and Armenia. The latter, of course, does not admit being a party to the conflict, otherwise it would have been recognized an aggressor by the international community, occupying a significant part of the neighbor’s territory. Armenian position is that Azerbaijan is opposed by the Nagorno-Karabakh Republic defending its right to independence. But this trick does not change the fact: the entire length of the Armenian-Azerbaijani border is a front line. In addition, Turkey has also blocked its border with Armenia. As a result, Armenia became a small landlocked country isolated from the world, having land communication with Georgia and Iran only. 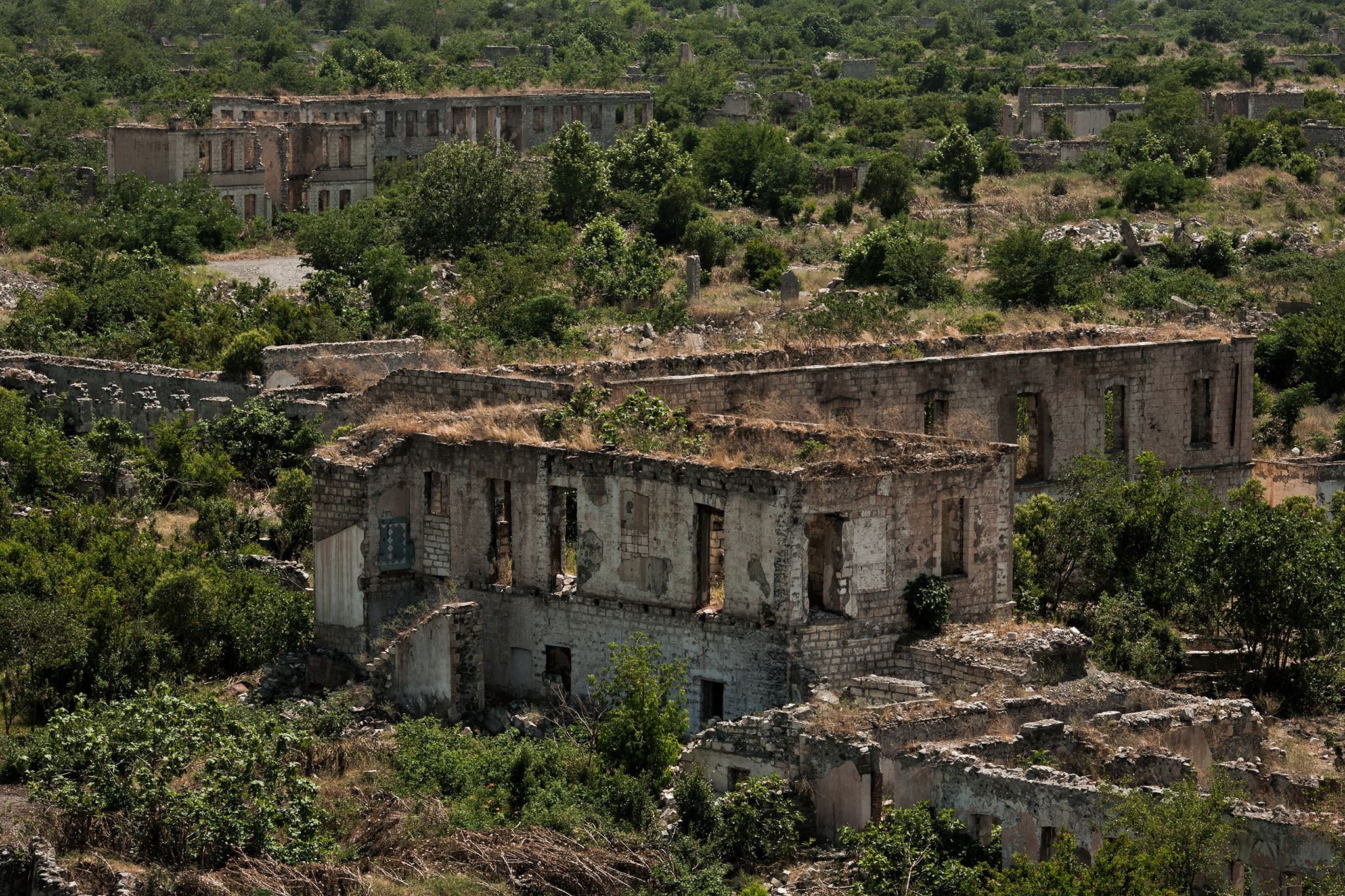 Pictured: Abandoned ruins of the Azerbaijani town of Agdam on the line of contact.

Isn’t it a strange coincidence, that the “peace process” in the Karabakh conflict, as well as the conflict in Donbass, be handled by the OSCE mission in Minsk? For Donbass, there are the Minsk agreements, and for Karabakh – the Minsk Group led by co-chairs of Russia, France and USA. The success of the Minsk process on Karabakh can be judged by the fact that after over two decades the conflict remains unresolved, with skirmishes and trench warfare going on and off. Hundreds of servicemen have been killed in this conflict since the official cease-fire in May 1994. The April incident is by far the most dangerous of all – air force, heavy artillery and armored vehicles were deployed. However, a resumption of full-scale war is not warranted. The experts monitoring the situation in the South Caucasus have weathered nerves and are cautious in their forecasts.

Over the past two decades, the conflict in Karabakh has become stable and manageable, a parity has formed between the parties, not allowing any of them expect a complete victory. On the one hand, Azerbaijan has significantly ramped up its military potential, as Baku’s current spending on defense already exceeds the total state budget of Armenia. Baku craves for a military requital, but it is restrained by the circumstances. Armenia is a member of Collective Security Treaty Organization, the Russian-led military-political bloc. There is Russian 102nd Military Base stationed in the Armenian town of Gyumri. In addition, Russia shares a common border with Azerbaijan. Baku believes that a victory over Armenia is possible only if Moscow does not interfere. 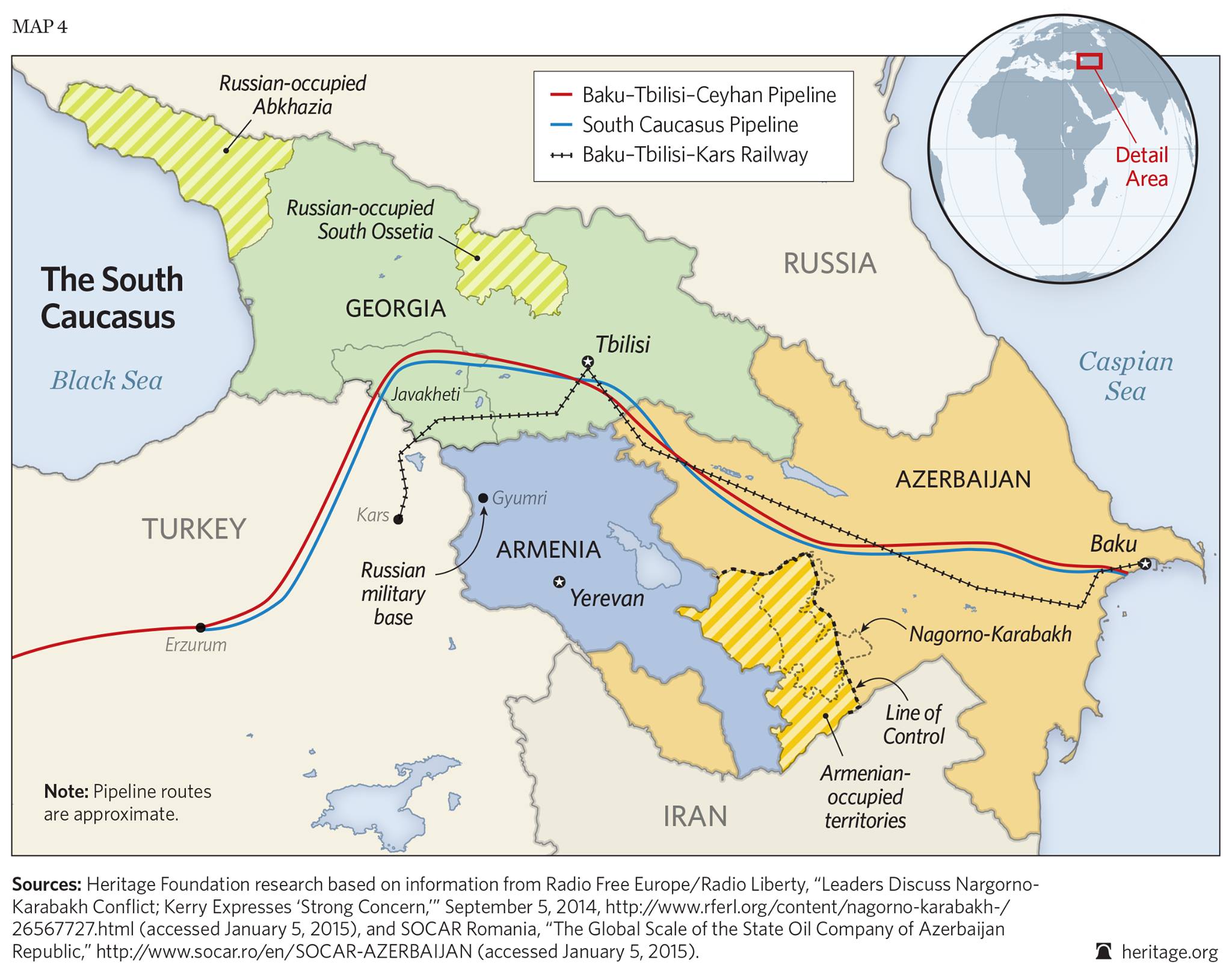 Occupied territories and transport projects in the South Caucasus

Therefore, while the prospects are vague for a permanent solution to the Karabakh conflict, the issue has become a factor of internal policy both in Azerbaijan and Armenia. Both governments are rallying public support over patriotic agenda, appealing to the need to be prepared to defend or liberate their land. The unresolved issue of Karabakh has became a resource of legitimacy for the current regimes both in Baku and Yerevan. Periodic escalations are designed to serve as a reminder that “matters are serious”, and it is necessary to stand by the “consistent policies” of the respective governments.

However, the international situation has changed significantly after the beginning of the Russian aggression against Ukraine in February 2014. The Kremlin is stretching its military resources, participating in other wars (Donbass, Syria), and a decline of economic and political power is looming in the long for Russia. This gives hope to Azerbaijan that Armenia will be left without a defender at the crucial moment. The deterioration of Russo-Turkish relations is also a signal to Azerbaijan that one day it may receive actual assistance from Ankara. No wonder the most significant conflict escalations in Karabakh happened since the summer of 2014. The current activity is no more than prodding, and it is likely to continue.

Although, there are both Russian and Western countries sitting together on the  Minsk group on Karabakh, their interests are diametrically opposed. The West sees the South Caucasus, in the first place, as a transit route to deliver Caspian energy to Europe.  In part, it is a narrow passage through “mountain gorges” sandwiched between hostile Russia and Iran, in constant danger from the nearby frozen conflicts in Nagorno-Karabakh, Abkhazia and the Tskhinvali district. 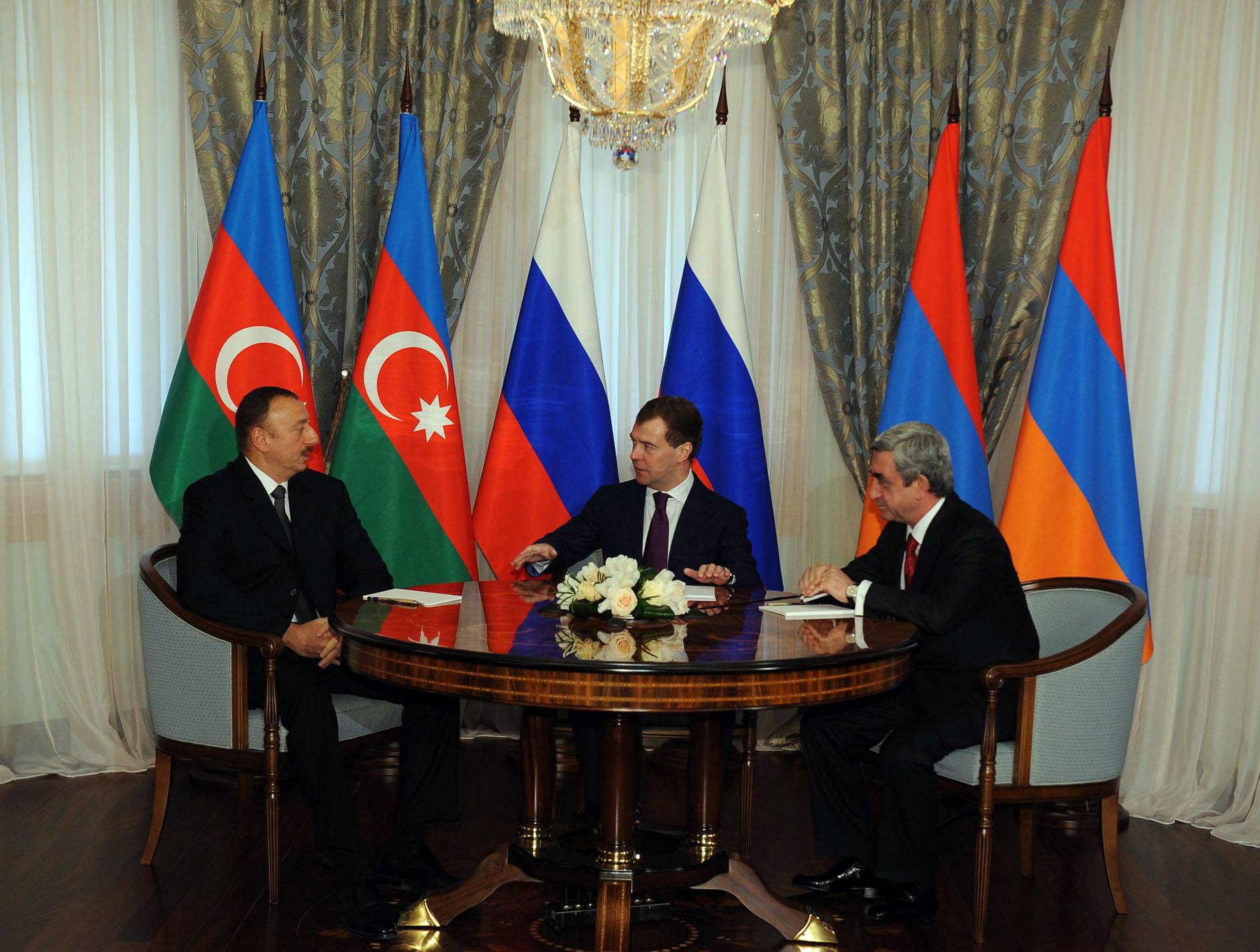 Russia has been doing the “reconciliation” of Armenia and Azerbaijan for the past 22 years.

Western countries are genuinely seeking to resolve the Armenian-Azerbaijani conflict. As this would open borders and pave the way to a safe construction of transit projects through Armenia to Turkey, in addition to those that are already in operating through the territory of Georgia. However, Western countries have so far been inapt at peacekeeping. They are against the resolution of the conflict by military means, but are not able to propose any other meaningful options to the parties. Meanwhile, Armenia is being firmly steered by the Kremlin in all matters of foreign policy, including Ukraine. Yerevan understands that it is not the good intentions of the West, but the military guarantees of the Russian Federation that provide for its security.

Russia’s interest is in maintaining an infinite Minsk format for Karabakh in its current status. Firstly, it blocks Western energy transport projects preserving the Russian acces and transit a monopoly on the resources of the Caspian Sea and Central Asia.

Bound by the conflict, Armenia and Azerbaijan have to look out for the Kremlin in their foreign policies. Russia carved itself the role of the main arbiter in this confrontation, and Moscow does not intend to lose it. Secondly, Russia’s mediation in yet another conflict, together with the Western countries, is giving it importance and respectability. As Russia’s international standing deteriorates because of its policy towards Ukraine, the Kremlin is trying to emphasize in every way its indispensability in solving urgent global problems. How does Europe stop the wave of terrorist attacks, if Russia is not recognized a full member of the anti-IS coalition? Who is able to single handedly stop a new war in Karabakh? Perhaps the one who actually controls the level of violence. Without wading too far off into conspiracy theories, it is worth noting that both Azerbaijan and Russia benefited from the current escalation in Karabakh, but for different reasons.

In conclusion, the perfect solution of the Karabakh conflict would have been finding common ground between Azerbaijan and Armenia, without the “mediation” of Russia. So far, there are no viable setup for a true ceasefire in sight, as the positions of both parties look incompatible. Armenia wants to maintain the status quo, and Azerbaijan is set on restoring its territorial integrity. However, the rapidly changing geopolitical situation could have Armenia pondering if it chose a wrong ally. Such case would inevitably entail certain concessions to Azerbaijan, in order to avoid a military defeat.
Keeping the Minsk format on Karabakh in its current shape will lead to nothing but more deaths of servicemen and civilians, as well as playing into the game of the bogus peace keeper – Russia. Moscow  has a similar role in store for the Minsk agreements on Donbass.

(CC BY 4.0) information specially prepared for InformNapalm.org site, an active link to the authors and our project is obligatory for any reprint or further use of the material.

No Responses to “Karabakh and Donbas: parallel tracks of the Minsk process”