Russian disinformation campaign against Ukraine is unfolding in Portugal 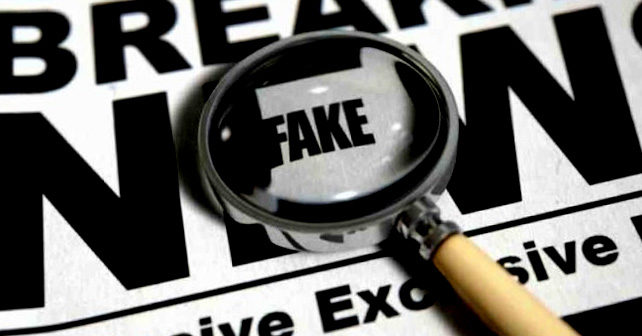 Since the beginning of June, Russia has been actively pushing a new disinformation information operation against Ukraine in Portugal, with messages and narratives typical of the Russian propaganda. InformNapalm volunteers from the Ukrainian diaspora in Portugal noticed signs of deliberate anti-Ukrainian media campaign. The culmination of this special operation was on June 21, 2020, when one of the most popular Portuguese newspapers Público published 3 articles at once, in which Ukraine was called “the cradle of modern world Nazism” and “a training ground for neo-Nazis from around the world.” On June 23, the publications were repeated, and their author provoked a diplomatic scandal. Read more about this below.

On November 8, 2019, the UN International Court of Justice issued a full decision recognizing the jurisdiction of the court in the case of Russia’s violation of two conventions – the International Convention for the Suppression of the Financing of Terrorism and of the International Convention on the Elimination of All Forms of Racial Discrimination. Charges against Russia include: providing weapons and other assistance to illegal armed groups in Donbas; downing of MH17 flight; shelling of residential areas of Mariupol and Kramatorsk; destruction of a civilian passenger bus near Volnovakha and many other crimes.

Volunteers of the InformNapalm international intelligence community have continuously presented numerous facts about the participation of Russian military personnel, unique types of modern Russian military equipment and entire Russian units in the aggression against Ukraine at high international platforms. The results of the InformNapalm investigations were presented by official Ukrainian delegations at meetings of the Parliamentary Assembly of the Council of Europe, NATO and OSCE.

Journalists and politicians in the service of the Kremlin?

Journalists must provide the public with honest reporting, not manipulate data and concepts. At the same time, distortion of facts through the use of incorrect terms is a tool of the post-truth and misinformation. Russia is an aggressor country, and this fact has been repeatedly recognized in resolutions of international organizations of the highest level. Russia has invaded Ukraine and continues to wage an unprovoked war against Ukraine in the Donbas. It continues to use distorted terminology as an effective tool of hybrid warfare. Russian propaganda is also active in the EU. One well-known fact is the Kremlin’s funding of radical parties and groups, both far-right and far-left, in many parts of the world.

Kremlin lobbyists are also active in Portugal, sometimes openly and sometimes hiding behind the front of a “Ukrainian public organization.” Media attacks are carried out regularly, and from time to time the so-called “immortal regiment” provokes clashes in the streets of Lisbon.

The Kremlin’s propaganda activities are not limited to this. Accusations of Ukrainians of Fascism, Nazism and neo-Nazism are periodically pushed to readers and viewers. One striking example is the activity of Mamadou Ba, known in Portugal for his racist remarks, who heads the SOS Racismo, an organization allegedly set up to “fight racism”.

Mamadou Ba belongs to the far-left party and is a member of the Portuguese parliament. His message on the page warns the Portuguese to be alert, claiming that “Lisbon is infected by Ukrainian Nazis.” 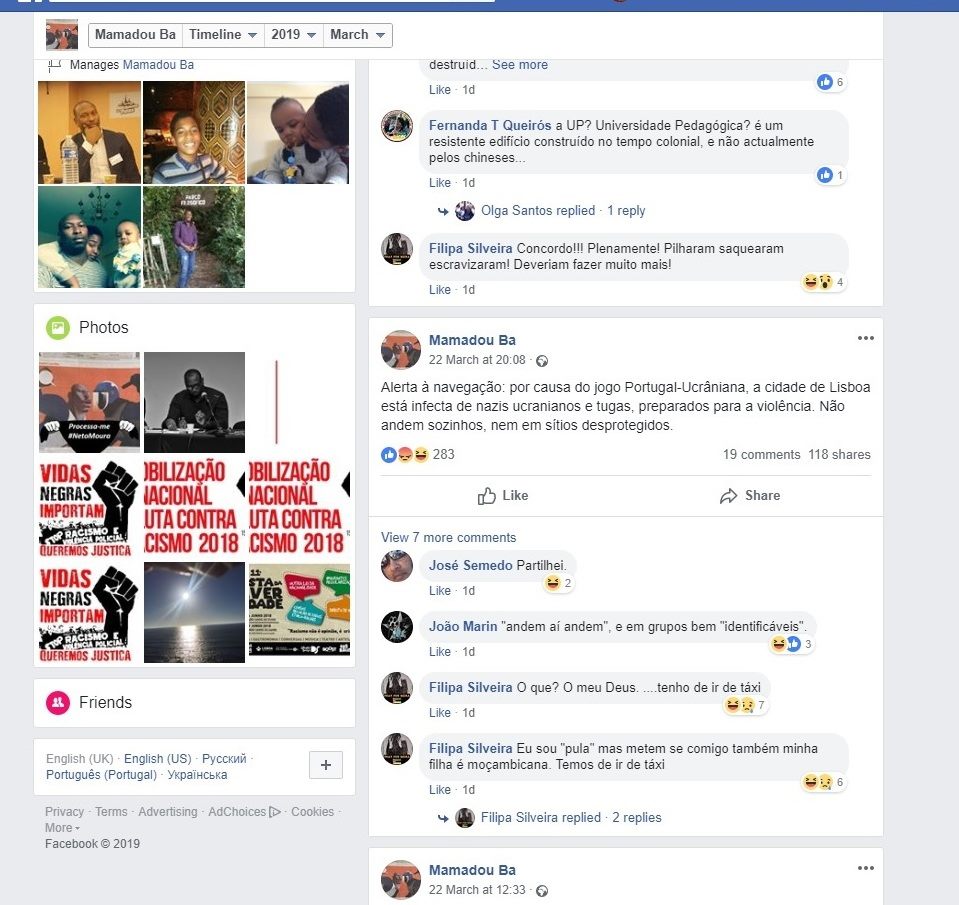 The Ukrainian community in Portugal responded to the attack by demonstrating, writing an open letter and a letter of complaint to parliament, as Mamadou Ba is one of the legislators, who decides how 36,000 Ukrainians will live on the Portuguese soil.

There are 273,600,000 people around the world whose native language is Portuguese. Therefore, the Kremlin’s operations in the Portuguese media space pose an important threat to Ukraine and are just another dimension of the Russian hybrid aggression. By the way, the InformNapalm international volunteer community also has an active Portuguese version of the site.

Another escalation of the anti-Ukrainian media campaign in Portugal took place in early June. One of the first alarming signals was an article by Giulia Fontes, which appeared in the Brazilian media on June 1. 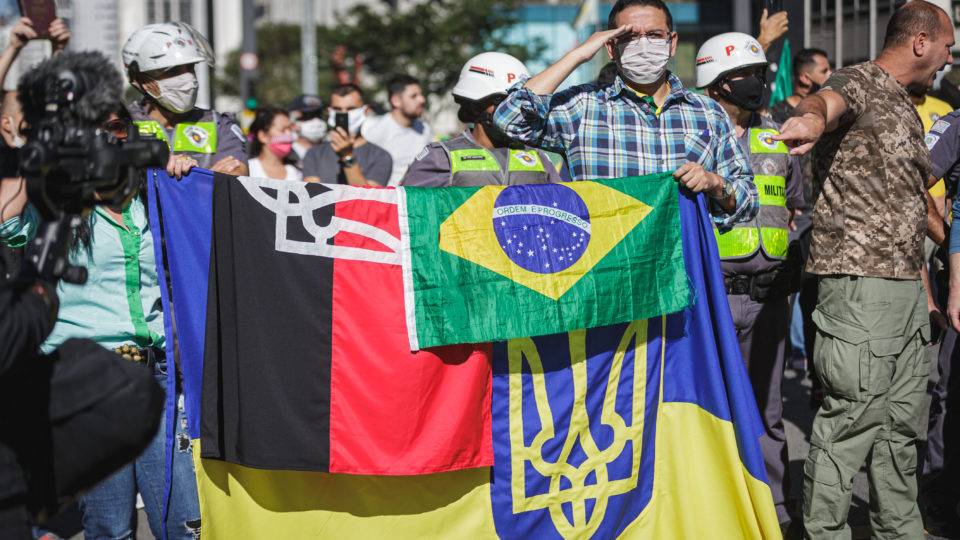 The article said that in Sao Paulo, protesters in support of incumbent president Bolsonaro appeared with Ukrainian national blue and yellow flag and red and black flag bearing a Ukrainian trident , which, according to the author, are “extremist symbols”.

The Ambassador of Ukraine to Brazil Rostislav Tronenko in an interview with CNN, said that the red and black flag is historical and symbolizes the fertile land of Ukraine and the blood shed by Ukrainians in their fight for its sovereignty, whereas the Trident means the Holy Trinity, a tribute to memory of Prince Volodymyr who brought Christianity to Ukraine in the tenth century.

Contrary to the statement of the Ukrainian diplomat, journalist Giulia Fontes insisted that these symbols allegedly belong exclusively to the “Right Sector” and are, in the journalist’s opinion, “extremist”.

The continuation of the information offensive did not take long in Portugal. On Sunday, June 21, 2020, one of the most popular newspapers Público published 3 articles in a row, in which Ukraine was called “the cradle of modern world Nazism” and “a training ground for neo-Nazis from around the world” (attached PDF with these publications).

The author of these materials is Ricardo Cabral Fernandes, an ardent admirer of the extreme left (Esquerda or Bloco de Esquerda). All three of his articles sound similar in tone, emphases and use of definitions. The most noteworthy is the publication titled “Ukraine – a military training ground for the global extreme right” (“Ucrânia, o campo de treino militar para a extrema-direita mundial”).

“Today, Ukraine is one of the main centers of attraction for international extreme right, and almost four thousand foreigners from 35 countries have already been trained and have taken part in the ranks of militia in the Ukrainian civil war”

Despite numerous international documents defining the war in eastern Ukraine as Russian aggression, this journalist is actively promoting the Kremlin’s narrative of the “civil war in Donbas”.

Manipulating baseless allegations is a staple tactic for this author of anti-Ukrainian articles:

“The Azov Regiment has become a broad movement, has created a state within the Ukrainian state, has spread its tentacles throughout Europe, and aims to create a Ukrainian foreign legion,” said Cabral, pushing another absurd Kremlin narrative.

The manipulations did not end there, but became even deeper. Cabral compared Ukraine to ISIS or Daesh. To lend credibility to the manipulation, Cabral made a reference to Jason Blazakis, an expert who for a whole decade was responsible for financial counteraction to terrorism and the definition of terrorist organizations at the US State Department. The journalist wrote that Blazakis allegedly claimed that this was the way ISIS had trained extremist killers to succeed in Syria, and that Ukraine was an ideal training ground for terrorists because it was “the back door of the European Union.” We have not found any original sources of this quote or any similar statements from Jason Blazakis. Perhaps this misrepresentation on the part of the journalist Ricardo Cabral is also a manipulative attempt to divert attention from recent US determinations against Russian right-wing radical movements that have recruited militants for the war in Donbas.

Interestingly, Cabral gives negative connotation to the events of the Ukrainian Revolution of Dignity, calling these events – a “coup against the incumbent President Yanukovych“, fully in tune with the Kremlin terminology book. It is sad to see such writing from a Portuguese journalist, but Cabral is also just a human entitled to his own opinion. Of much greater concern, however, is the fact that all these articles were published by Público, a major Portuguese newspaper, which had not previously been seen as the “Kremlin mouthpiece.”

The Embassy of Ukraine in Portugal, represented by Ambassador Inna Ohnivets, addressed the Portuguese institutions and the wider community, expressing outrage at the false reporting in one of the most popular national newspapers.

Meanwhile, the newspaper came out again with the same anti-Ukrainian article on the front page.

Politically active Ukrainians living in Portugal have also prepared an open appeal to the Parliament to draw attention to the wave of fake news and publications that promote the narratives of the aggressor country Russia, pointing out that this kind of libelous reporting is harmful not only to Ukraine but also carries a threat to Portugal itself, which has provided and continues to provide political support to Ukraine in its struggle for sovereignty and independence. Portugal is also among the countries that have recognized the Holodomor a genocide of Ukrainian people. Portugal also voted in favor of the North Atlantic Council admitting Ukraine as a member of NATO’s Enhanced Capabilities Program.