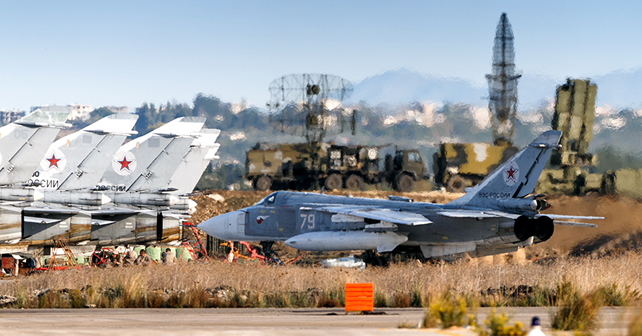 On December 31, 2017, on the New Year’s Eve, the Russian military in Syria suffered significant losses in at least two incidents. The Russian Ministry of Defense tried to hide the incidents from the public, but the information began to leak into the media, which forced the Ministry to publish its own response several days later.

On January 1, it became known that on December 31, 2017, a Russian Mi-24 combat helicopter crashed in Syria. Both crew members were killed. Only after the outcry on social networks and the media, on January 3, the Russian Defense Ministry recognized the incident, offering significantly different details of the disaster.

Also on January 3, the Russian Kommersant newspaper reported details of another incident, with reference to two of its own military and diplomatic sources. According to the newspaper, on December 31, the Russian Khmeimim airbase in Syria was targeted by mortar shelling by radical Islamists. As a result of the shelling, at least seven aircraft were destroyed: four Su-24 fighter bombers, two Su-35S multirole fighters and an An-72 transport aircraft. More than ten servicemen were injured.

On January 4, the Russian Defense Ministry was forced to acknowledge the fact of mortar shelling, but claimed the deaths of two Russian servicemen, denying information about the destruction of several Russian military airplanes.

As the reports are controversial, we should expect additional information and satellite images of the Khmeimim airbase for the specified period in order to confirm or refute the reports. But one thing is evident: Russian Ministry of Defense had to explain its losses to the public twice in a few days. This raises the question: will Russia be able to officially complete the military operation in Syria, as Vladimir Putin said on December 11? Or will these statements prove once again to be short-sighted fallacies, like all previous promises of the Russian military and political leadership concerning the withdrawal of troops from the Syrian Arab Republic?

By Roman Burko especially for InformNapalm .

No Responses to “Russian Khmeimim airbase in Syria shelled by mortars”