On October 21, website Donbas.Realii, citing the report of InformNapalm international volunteer community on the location of areas of responsibility of the Russian 1st and 2nd Army Corps in the occupied Donbas, published an analysis and map of the ceasefire violations.

Additional information on these hybrid units, their personnel, weapons and equipment can be found in InformNapalm materials:

Identified: 1500 Russian servicemen of the 3rd MRB in Donbas

From Transnistria to Donbas, more data on Russian occupants in Ukraine

According to the information from the Joint Forces Operation, on October 21, the Russian armed forces violated the ceasefire in the Donbas three times. In Donetsk Oblast, near the towns of Avdiivka and Maryinka, the Ukrainian military also documented the flight of a Russian Orlan-10 drone along the demarcation line. The UAV was suppressed by means of EW.

Let us remind you that the Russian Orlan-10 UAV has repeatedly come under the scrutiny of InformNapalm international intelligence community. You can learn more about its use in the Donbas in the articles:

Another Russian drone shot down in Syria. Overview of Orlan-10 crashes from Syria to Ukraine

As of 2020, InformNapalm volunteers have collected facts about the use of at least 8 different types of Russian UAVs in the Donbas, in particular: Granat-1, Granat-2, Granat-4, Forpost, Orlan-10, Eleron-3SV, Takhyon, and Zastava, as well as another type of secret Russian drones with an unknown name. 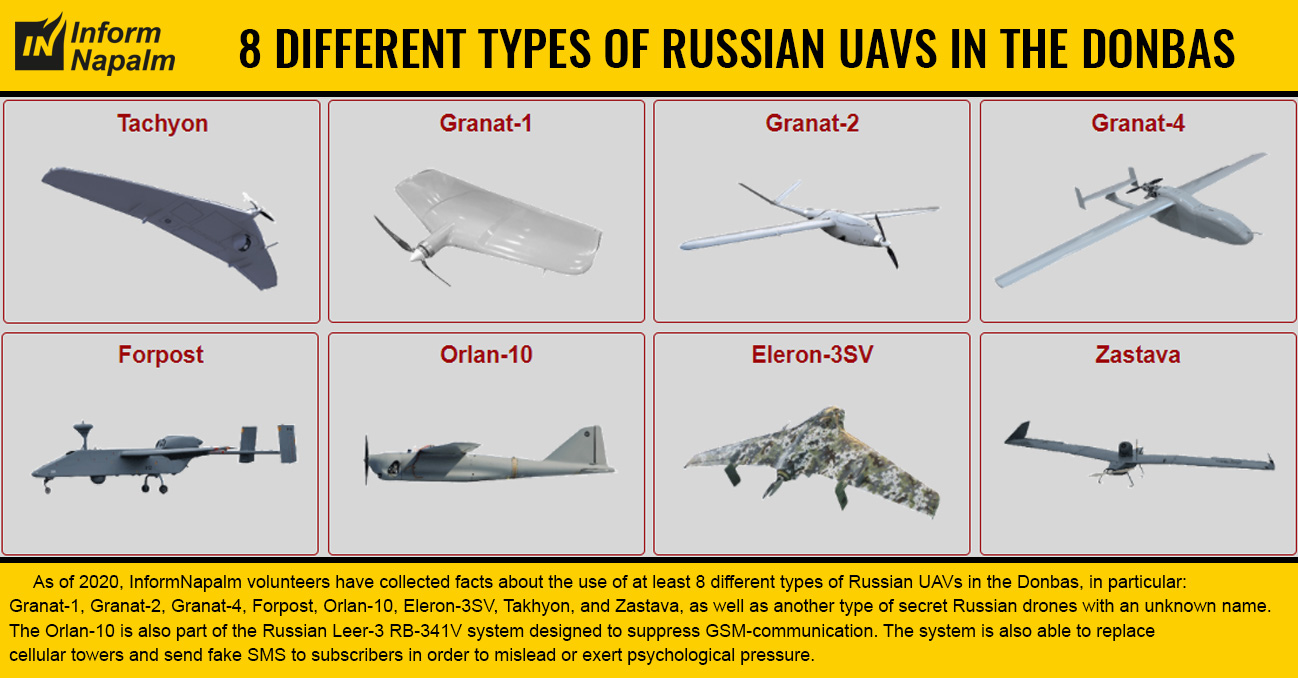 The Orlan-10 is also part of the Russian Leer-3 RB-341V system designed to suppress GSM-communication. The system is also able to replace cellular towers and send fake SMS to subscribers in order to mislead or exert psychological pressure.

This publication was prepared especially for InformNapalm.  Distribution and reprint with reference to the source is welcome! (Creative Commons — Attribution 4.0 International — CC BY 4.0)