Waging the ‘vaccine war’: attempts to prove the superiority of Sputnik V by using disinformation 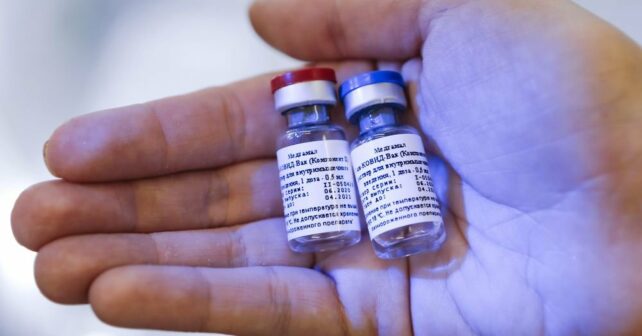 Disinformation landscape in the beginning of 2021 was heavily influenced by the reports on the suspected side effects of the Pfizer-BioNTech vaccine, as well as Hungary becoming the first country in the EU to approve the Russian state-developed vaccine. False and misleading coverage regarding COVID-19 focused on the measures taken by global governments to curb the effects of the pandemic, with suggestions made by Kremlin related media that the West was facing ‘the eternal lockdown’. Ukraine was targeted consistently throughout the month, whilst the Baltics became objects of disinformation either separately or as a part of the alleged EU failures and/or anti-Russian policies.

Throughout the first month of 2021, Debunk EU analysts noticed a couple of cases when a news story was appropriated for disinformation cases. For example, on January 14th it was reported that 23 elderly patients died in Norway following their immunization with the Pfizer- BioNTech vaccine against COVID- 19. The Norwegian Medicines Agency has investigated 13 of the deaths and concluded that common adverse reactions may have contributed to fatal outcomes in some of the frail patients.

Examples of the stories that followed:

Other examples of COVID-19 disinformation from January 2021

On January 8th, Andrew E. Kramer’s article on how and why he got vaccinated with Sputnik COVID-19 vaccine was published by The New York Times. On the same day, an article by a pharmaceutical analyst Sam Fazeli on the reasons to trust the Sputnik V came out on Bloomberg. Those two publications were extensively used to support the claims of both superiority of the Russian vaccine.

What was claimed: Journalist Andrew E. Kramer had doubts with regards to Sputnik, and these ‘were based primarily on the timing of the drug’s registration, which was announced “even before the later stages of the trials began.”’ Later, he became convinced of the safety of the vaccine, ‘which after the completion of the tests showed “good results” and high efficiency.’ ‘The author also notes that in Russia, in contrast to the “USA and other countries”, it was possible to avoid “queues and confusion” at vaccination centres.’ (TASS, 09/01/2021)

Our verdict: The article promotes the Kremlin disinformation narrative concerning the supremacy of the Sputnik V, whereas the message is based on manipulating quotes taken out of context. The journalist did say the Sputnik V was ‘what appears to be a bona fide accomplishment for Russian scientists,’ yet he also spoke about how Putin regime operates via politicized rollout and what seemed to be attempts to outperform the perceived competition in the vaccine race, which ‘only served to obscure the essentially good trial results.’ ‘Russian clinics have not been dogged by the lines or logistical snafus reported at vaccination sites in the United States and other countries,’ Andrew E. Kramer noted. Yet he also named two reasons adding to this: a weeklong holiday in early January, when the ‘country slumbers’ and vaccination centres are attended lightly, also stating that for now, ‘so many Russians [are] deeply sceptical of their medical system and the vaccine, there is no great clamour for the shot.’

Throughout the month of January, Ukraine has been consistently targeted by the pro-Kremlin media for the refusal to sign a deal with Russia on the purchase of the Sputnik V vaccine. It was a part of the narrative claiming that some countries, such as the Baltics and Ukraine, irrationally refuse purchasing Sputnik V for their national immunisation programmes, despite the shortage of vaccines and the side effects associated with the Pfizer-BioNTech jab. In the case of Ukraine, it was even claimed that the refusal was a criminal intent to deprive the citizens of their legal right to receive medical protection from COVID-19.

What was claimed: Ukraine has been unable to curb the COVID-19 pandemic: then coronavirus fund it had was used to build roads and nobody knows how much more money was simply stolen from the fund. The president of Ukraine does not want to use all the possibilities at his disposal to save the nation: for him, it is better to die without an American vaccine than to survive thanks to a Russian one. He would not ‘accept “handouts” from the “aggressor country” anyway.’ (RuBaltic, 03/01/2021)

Our verdict: Ukraine participates in the global COVAX Facility, which has been set up to provide COVID-19 vaccines and has held talks with all possible vaccine manufacturers and suppliers, issuing budget funds for the purchases. According to the President of Ukraine Volodymyr Zelensky, ‘a lot of money was spent on roads that lead to hub hospitals, ER departments or schools, and that needs to be done. In any case, it is all connected.’ Presenting claims about ‘God knows how much money stolen’ from the fund is far from being a verified fact and seems to be a ruse to attack Zelensky and the Ukraine overall. Moreover, the use of quotation marks when speaking about the ‘aggressor country,’ i.e., Russia, reflects the denial of the aggressive nature of its relations with Ukraine, bearing in mind the annexation of Crimea in 2014 and the ongoing military conflict in Donbass region, backed by the Kremlin.

This is how the story unfolded:

In contrast to the communication about the Western countries deliberately discrediting Sputnik V, on January 21st pro-Kremlin media reported extensively and gleefully on Hungary becoming the first country in the EU to grant approval to the Russian COVID-19 jab. It was also the first time a member state has broken ranks to give unilateral emergency approval for a vaccine.

The move was dubbed as the vaccine’s ‘trampoline to Europe’ and accompanied by a series of articles on an alleged campaign discrediting the Sputnik V and involving around 200 informational attacks. It was no coincidence that the only specific case to be mentioned as an ‘attack’ was the news in late December on Hungary refusing the Russian jab.

The approval of the Sputnik V by Hungary was also actively commented by Russian officials. Aleksey Pushkov, a Russian MP, Chairman of the Federation Council Committee on Information policy and a TV-host of his own programme, commented on the news by saying that ‘blocking the Russian vaccine is a political tool, as well as a cynical competition in the name of profit. Meanwhile, human lives are at stake. The Hungarian government seems to be aware of this.’ Dmitry Novikov, the Deputy Chairman of the Central Committee of the Communist Party of Russia, made claims that the obstacle on the road of Sputnik V to Europe is the ‘anti-Russian solidarity,’ and Hungary was the only exception. If the leadership of Western countries considered exclusively the interests of the population, the Sputnik V would become extremely popular in Europe, according to him.

False measures to fight COVID-19 was the top narrative within the false and misleading coverage on COVID-19 in January 2021, as measured by articles. The sub-narrative Vaccine has been developed without rigorous testing amplified it even more, as the pro-Kremlin media was often using the news about the side effects and fatalities that may had been related to the Pfizer-BioNTech vaccine as a background to showcase the superiority of the Sputnik V.

Meanwhile, Lithuanian fringe media mostly commented on the news of physicians infected by COVID-19 after the first dose of the jab. In the Polish language coverage, the sub-narrative was often paired with the rhetoric of violating liberties for the sake of curbing the pandemic, as well as creating an artificial segregation of those vaccinated and refusing the jab.

Country fails to fight COVID-19 led in terms of DebunkReach®, mostly aided by the sub-narrative Violation of liberties in the name of COVID-19, which often came in pair with Quarantine is unnecessary measure to fight COVID-19, as the two amplified the message on how specific countries failed to deal with the pandemic by introducing harsh measures that either do not work or are excessive – a message that was also fuelled by anti-lockdown protests and campaigns in Europe.

Measured by mentions, most of the articles with false and misleading content were published in Russian (29.2%), followed by Lithuanian (26.5%) and Polish (20.2%). Measured by DebunkReach®, it was the English language via internationally oriented state-run Russian news outlets that reached the largest number of potential contacts (54.6%), followed by Russian (38.5%).

Both measured by articles and DebunkReach®, RT stood out as the leading provider of false and misleading content in January 2021. RT (formerly Russia Today) is a television and internet-based news channel and one of the most important purveyors of Kremlin propaganda. The channel has been sanctioned several times by the U.K.’s Office of Communication for breaching the broadcasting code (reporting on the Skripal poisoning and Syrian conflict) and is currently registered as an “agent of a foreign government” in the United States (throughout the 2016 presidential elections, RT was central to Russian influence efforts to denigrate Secretary Clinton, the intelligence services found), nevertheless enjoying one of the highest YouTube viewership rates.

No Responses to “Waging the ‘vaccine war’: attempts to prove the superiority of Sputnik V by using disinformation”