93: the Battle for Ukraine – the new stunning documentary about Russian military aggression against Ukraine 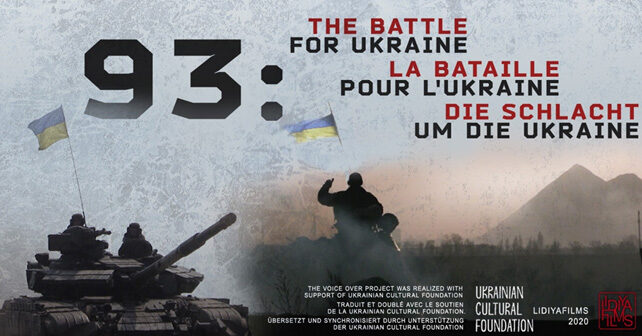 Volunteer project Lidi Ya Films made a compelling two-part documentary about the unprovoked military aggression of the Russian Federation against Ukraine. This film is a story of the war in the Donbas as seen through the eyes of the soldiers and officers of one of the most efficient Ukrainian infantry brigades. The documentary covers the war path of the 93rd Mechanized Infantry Brigade (MIB) from 2014 to 2016, a period of the most savage fighting. It is a story of terrible losses, hard-earned victories and true grit.

The command of the 93rd MIB was alerted to possible Russian aggression in January 2014. The first combat orders came about in March 2014 when Russia made its first move by invading Crimea. At that time, the 93rd MIB was desperately understaffed and far from combat-ready. Its live deployment history started with bringing out of mothballs its tanks and infantry fighting vehicles (IFV), as well as drafting and training conscripts and reservists. Within an impossibly short period of time, in an amazing show of resilience and support from the Ukrainian people, the brigade became one of the most skilled and successful infantry units of the Ukrainian Armed Forces.

In May 2014, the units of the 93rd MIB received its baptism by fire from Russian rocket artillery near Dobropillya, Donetsk Oblast. And in the summer of 2014, the brigade had already left its mark in some of the most critical areas of the Russo-Ukrainian war across both Donetsk and Luhansk Oblasts. It played a key role in the liberation of Karlivka and Avdiivka, in the tragic thrust for Ilovaisk, in the epic battle for the Donetsk Airport, and in many other key operations. It learned to cooperate closely with the volunteer battalions and partook in their morale and motivation. Throughout 2015 and 2016, the 93rd MIB was deployed to the hottest spots around Donetsk, and probably saw more fighting than any other infantry brigade of the Ukrainian Armed Forces.

This documentary is a rare glimpse into events on the ground through the eyes of the people who led their battalions, companies and platoons, drove their tanks and IFVs into battle, stormed towns and villages, and broke out of encirclements. It also shows the sheer scale and savagery of this war, as well as the participation in it by Russian career military men and mercenaries, totally destroying the Russian propaganda narrative about “civil war” and “separatist internal conflict” in Ukraine.

The film was translated and dubbed in English, French and German in 2020 with the support of the Ukrainian Cultural Foundation.

No Responses to “93: the Battle for Ukraine – the new stunning documentary about Russian military aggression against Ukraine”