Volunteers of InformNapalm international intelligence community, found out that Kyrylo Shevchenko (currently the head of the NBU) and Yevhen Metzger (currently the chairman of the state-owned Ukreximbank) traveled to Russia in 2016. A probable reason for the visit was the situation with the seizure of the assets of the runaway president Yanukovych and his entourage.

The data about individuals who visited Russia before 2019 was obtained through volunteers who collect information in the context of uncovering war crimes committed by the aggressor state Russia in a hybrid war against Ukraine. It became known that Kyrylo Shevchenko (at that time, the chairman of the state Ukrgasbank) and Yevgen Metzger (director of the SME Department at Ukrgasbank, and soon a member of the board) on August 16, 2016 at 10:10 AM took the same plane from Boryspil airport to Minsk (flight 844). Once there, they boarded a plane to Moscow at 12:20, landing at their destination at 13:40. By 19:50, Metzger and Shevchenko completed their tasks in Moscow, returned to Minsk at 21:10 and boarded a plane to Kyiv, which departed at 22:30 and landed at Zhulyany airport at 23:30.

Such behavior in 2016 is unacceptable for the head of one of the largest state-owned banks in Ukraine. Why would Shevchenko take the risk and travel to the territory of the aggressor state? The most likely reason is the negotiations with people who could not leave Russia in order to meet in a safer jurisdiction for Shevchenko and Metzger. We are specifically referring here to Viktor Yanukovych and his closest circle, in particular Serhiy Kurchenko [Ed: Kurchenko is widely known as the “treasurer of Yanukovych” and fictitious holder of his assets].

It was very difficult for Yanukovych and his entourage, in particular Kurchenko, to withdraw the money stolen in Ukraine. The story of the seizure of Yanukovych’s money is widely known in the world. The relevant decision was made by the Kramatorsk City Court, but all the details of the decision were classified. In the end, the secret decision of the Kramatorsk court was published …by Al Jazeera which made public all 95 pages of that legal text. From the text of the decision, it became clear that the company VETEK, founded by Kurchenko for criminal and corrupt transactions, illegally embezzled billions of hryvnias. In particular, UAH 500 million from the state-owned Ukrgasbank. 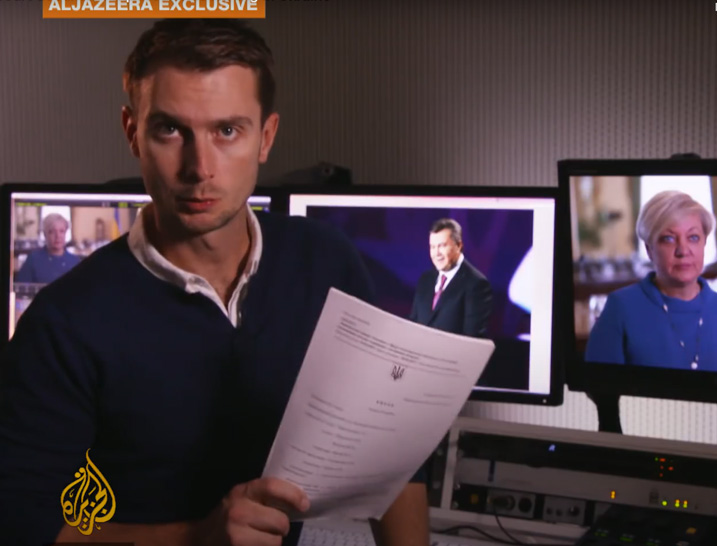 Thus, Ukrgasbank had assets that were controlled by “the family” [Ed: this word was widely used in Ukraine to refer to the family of Viktor Yanukovych which came to control vast assets through corporate raiding during his rule], Kurchenko’s people and the like. Obtaining and withdrawing these assets, in order to save them from the seizure, could only be possible through access to the bank’s management and the consent of the people who fictitiously held these assets. We believe that law enforcement agencies in Ukraine should take a keen interest in the operations that were carried out at Ukrgasbank in 2016 and later. Apparently, they will find traces of the withdrawal of money to “the family” under fictitious agreements to jurisdictions where these funds would become unreachable for the Ukrainian justice.

Until recent events, information about Kyrylo Shevchenko’s contacts in Russia could not be properly assessed by the investigative volunteers of InformNapalm. However, there were recent reports in the media that Sberbank was allegedly actively seeking to avoid the sanctions in Ukraine through a merger and acquisition procedure, and that the National Bank of Ukraine (NBU) had already agreed to it, whereas the buyer would be the agrarian tycoon Andriy Verevskyi (Kernel), a highly influential member of the Dovira parliamentary faction. According to the information from other sources, this issue is also being pushed by other MPs of the same Dovira faction, Vitaliy Khomutynnik and Andriy Ivanchuk. It is Ivanchuk who is allegedly negotiating with the Russian side (represented by German Gref). The essence of the negotiations is obtaining the permission from Russia to sell the Ukrainian subsidiary of Sberbank (which is now under the sanctions National  Security and Defense Council of Ukraine) to a Ukrainian buyer. It is clear that such an acquisition is impossible without the approval of the NBU. The head of the NBU, Kyrylo Shevchenko, is also within the perimeter of the deal, as he is very close to Ivanchuk: an old friend and colleague of Andriy Ivanchuk, Oleksandr Prysyazhniuk, heads the Office of the National Bank of Ukraine created by Kyrylo Shevchenko, which is very similar to an “overseer” structure [Ed: a mafia-style figure or group appointed to supervise important assets managed on behalf of the syndicate]. Mr. Prisyazhnyuk is also the son-in-law of the late Vasyl Dzharty who was known as the “overseer of Crimea” under Yanukovych.

Recently, on June 15, 2021, MPs Andriy Ivanchuk and Oleksiy Ustenko submitted a number of amendments to the draft law on corporate governance in banks (4367). These amendments abolish the powers of the NBU Council, eliminate the positions to which Shevchenko failed to appoint his people, and make the National Bank a fully controlled body. Thus, there are signs that negotiations between the head of the NBU, Kyrylo Shevchenko, with Russia and Yanukovych’s people are continuing.

By Mykhailo Makaruk specially for InformNapalm. Translated by Artem Velichko. Distribution and reprint with reference to the source is welcome! (Creative Commons — Attribution 4.0 International — CC BY 4.0) InformNapalm social media pages: