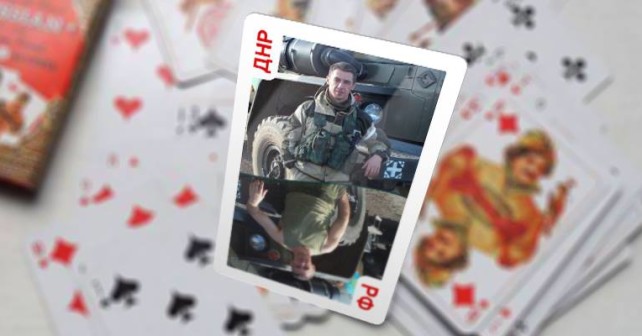 InformNapalm community has demonstrated a lot of facts how the Russian servicemen mimic the ‘militants’ of so-called ‘Novorossiya’. Another open source data investigation resulted in disclosing of impersonation of a whole unit from the 15th separate motorized rifle brigade with a cynic name ‘Mirotvorcheskaya’ [‘Peacekeeper’] (military unit No. 90600, Central Military District, Roshchinsky, Samara Oblast, Russia) which has been mentioned a lot in the context of the ‘Ukrainian assignments’.

The whole unit was given away by Evgeny Ivanov (profile archive, album archive, contacts archive), a serviceman of the ‘Peacekeeping’ Russian forces who had a contract with the mentioned military unit. Ivanov is assigned to the supply unit of the 15th brigade and presumably is a Ural-4320 truck driver (1, 2). 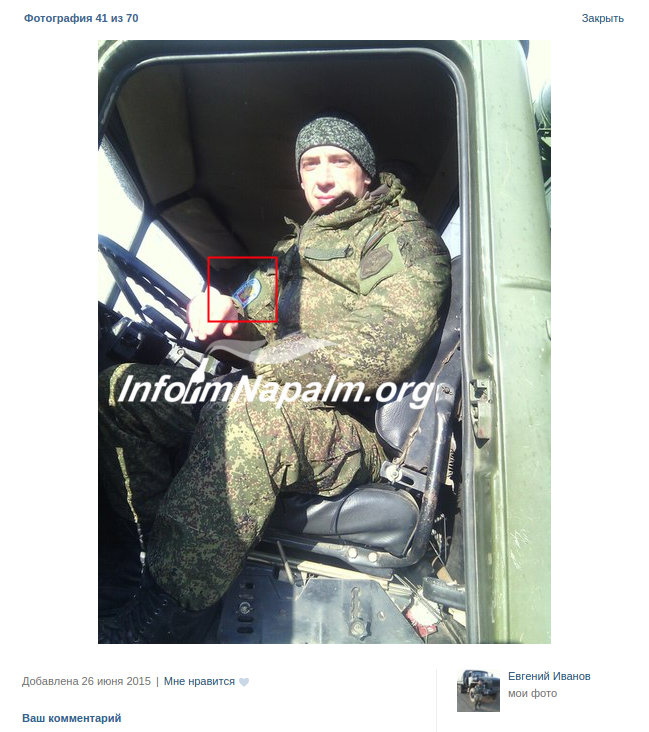 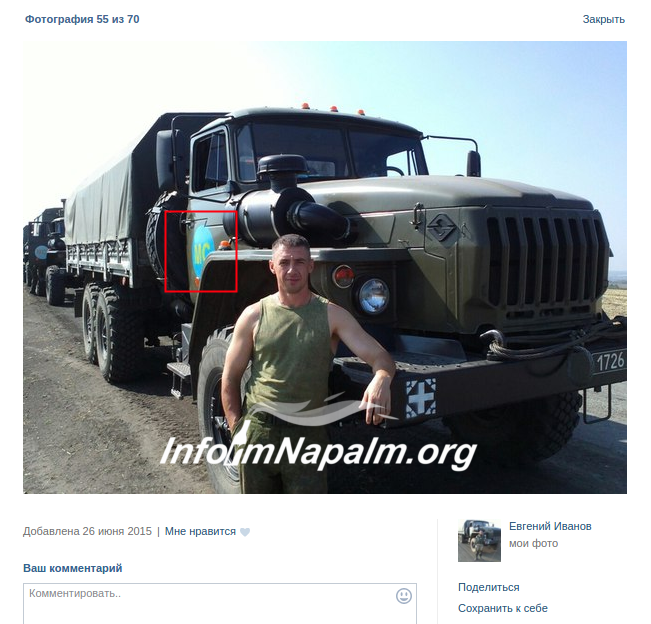 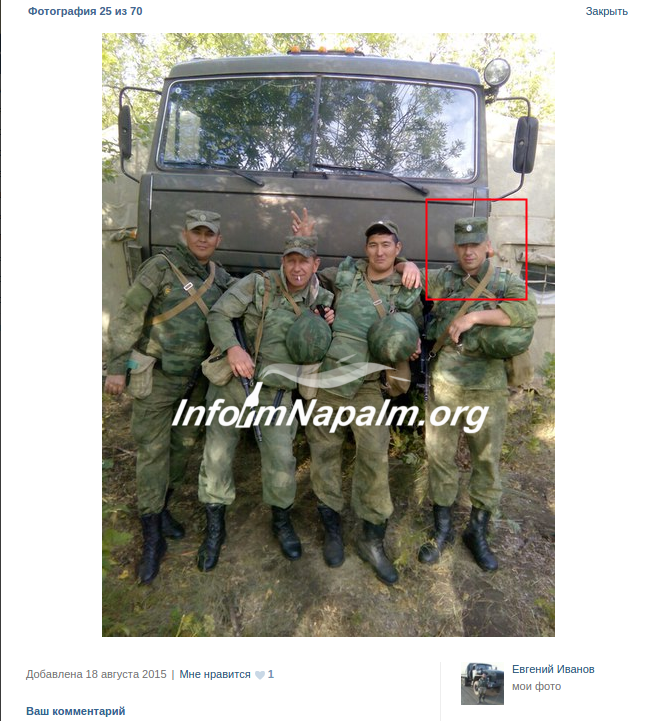 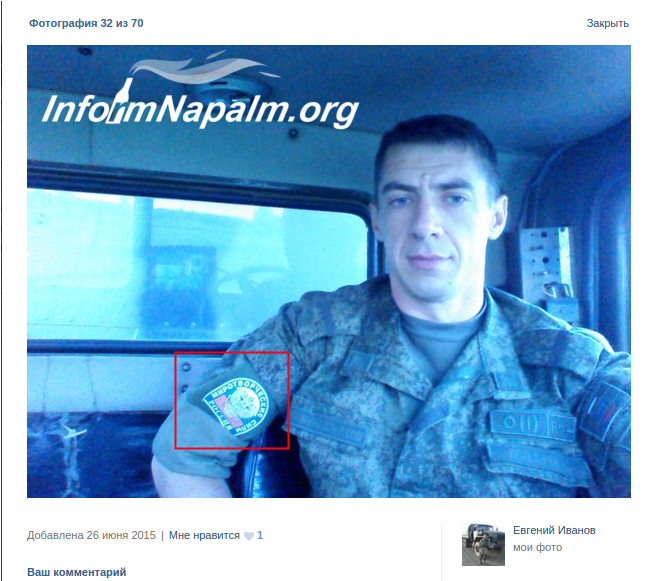 According to our information, deployment of the servicemen of the 15th brigade from Ural to the South of Russia started in the beginning of 2014. ‘Peacekeepers’ from Samara also took part in the annexation of Crimea in early Spring of 2014. Next, they were transferred to Belgorod Oblast, to the areas bordering with Kharkov Oblast of Ukraine. In some time, when ‘KhPR’ project failed and the hostilities in Donbas escalated, units from the 15th brigade were urgently moved to Rostov Oblast (Kamensky raion was one of the base locations). Starting from there the tactical ‘peacekeeping’ groups infiltrated Ukraine for different military operations. Brigade’s personnel was constantly rotated, the equipment was replaced as well. As far as we know, the rearming of old BTR-80 APCs to BTR-82A model used to be done almost in field environment. Replacement and shipment of new equipment was done via the railway, the personnel rotation – exclusively by Il-76MD military transport aircrafts (with endpoints in Millerovo, Rostov and Taganrog). 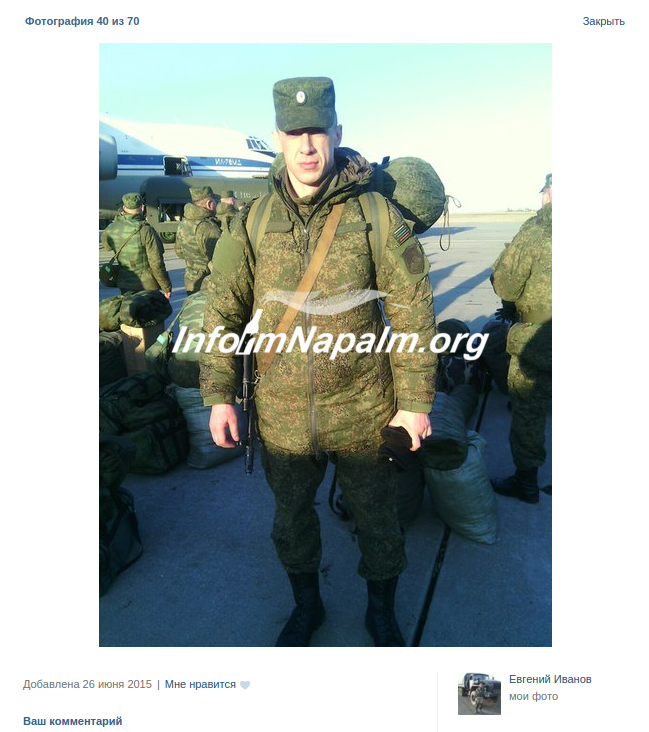 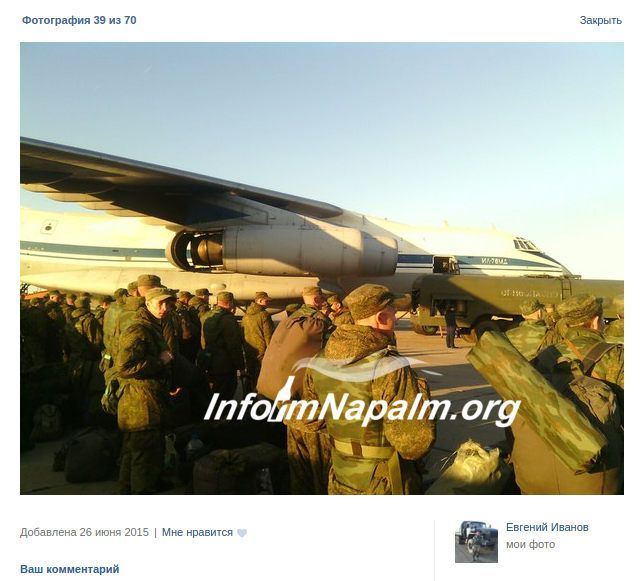 Evgeny Ivanov uploaded pictures from his ‘Rostov-Ukraine assignment’ on June 26, 2015. We were able to identify the exact date of his supply unit arrival to Rostov and the location of the field camp near khutor Akatnovka (8-10 km from the Ukrainian border, Kamensky raion, Rostov Oblast, Russia) thanks to Ivanov’s brother-in-arms Vitaly Redkin (profile archive, album archive, contacts archive), who served in the medical company – it was September of 2014 (1, 2). 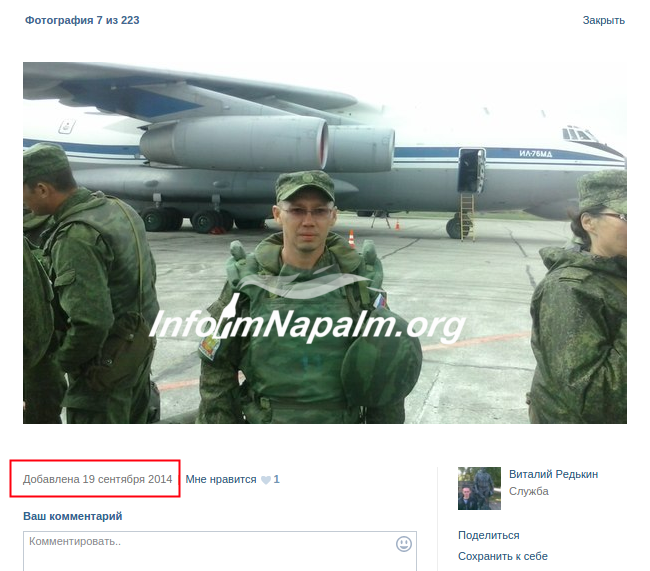 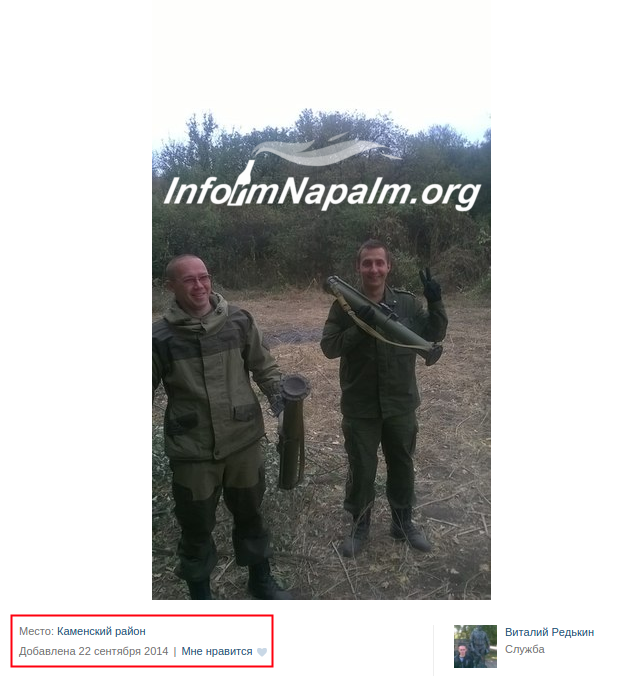 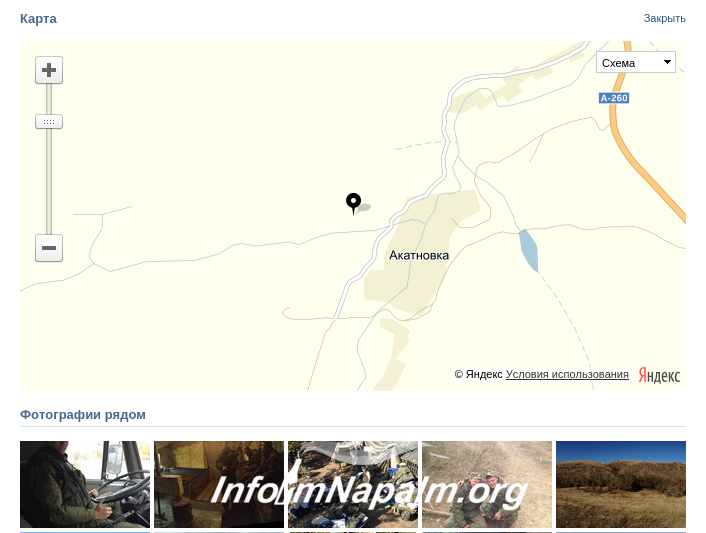 The next photos show the field camp of the 15th brigade: 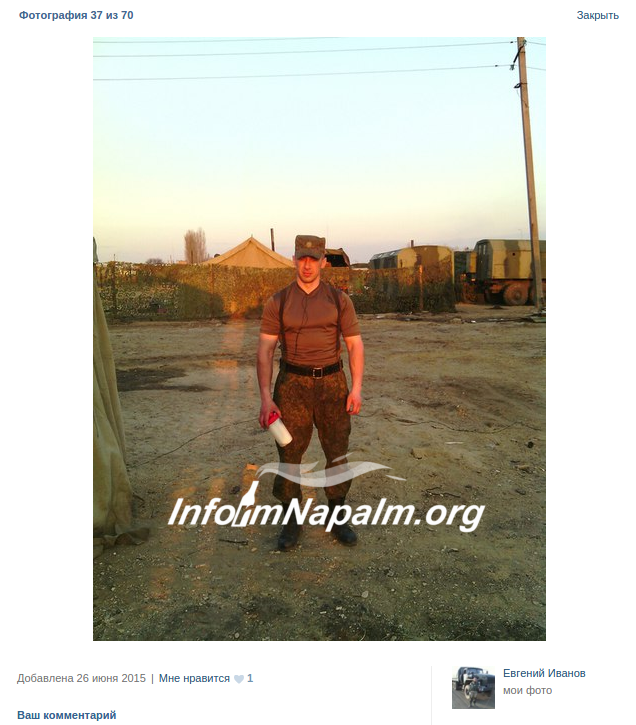 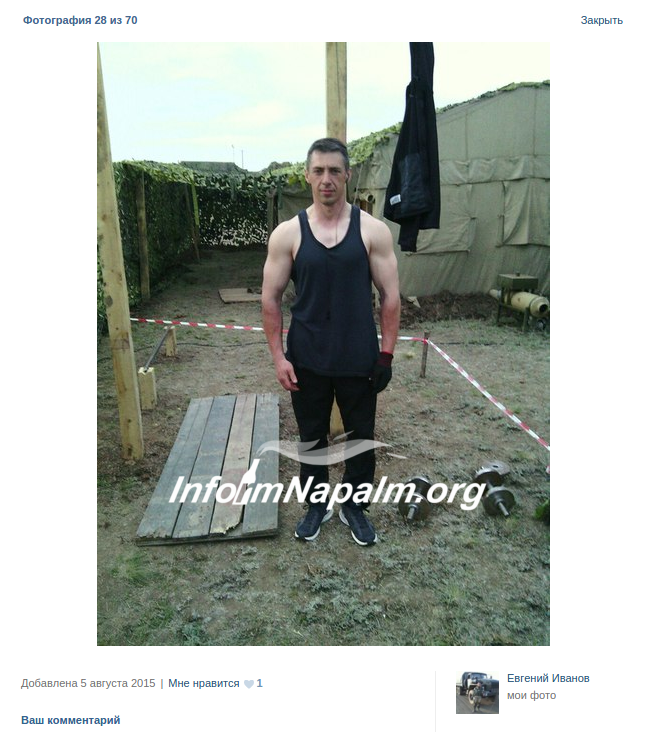 Supposedly in the end of September of 2014, the ‘peacekeepers’ got another trip to Ukraine. A convoy was formed (1, 2). We identified the license plate of ‘Ural’ truck presumably driven by Evgeny Ivanov – it is ‘1726АЕ 76‘ (region code ‘76‘ indicates vehicles of the 15th brigade, since the unit is part of the Central Military District). 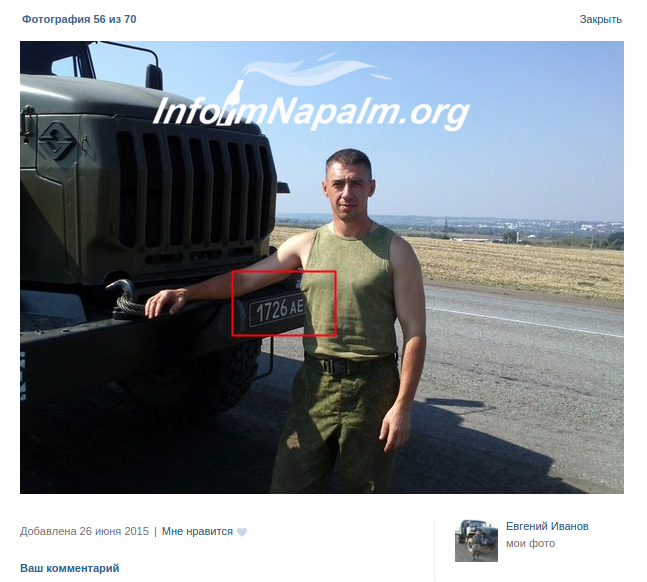 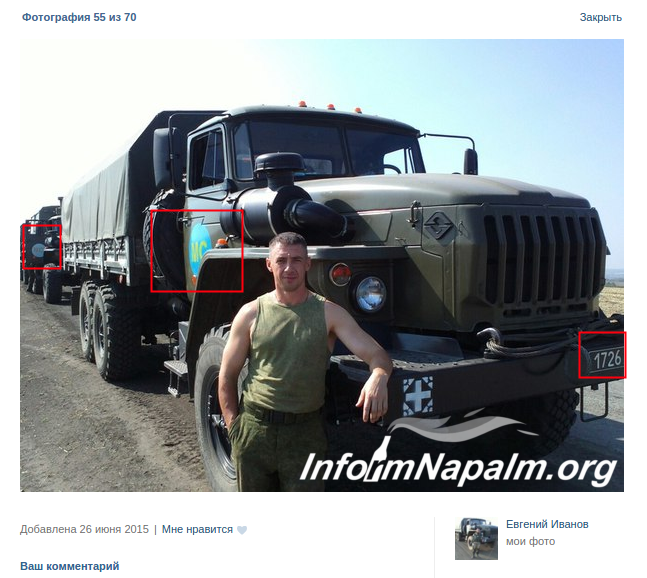 Being in standby mode before invasion to Ukraine, the ‘peacekeeping’ unit starts the transformation. They follow the proven scheme: the license plates are removed from the vehicles, the blue ‘peacekeeping’ identification signs are painted over with bright green paint, the servicemen change their uniform to informal clothes used by ‘Novorossiya’ militants, and the white arm badges are put on. 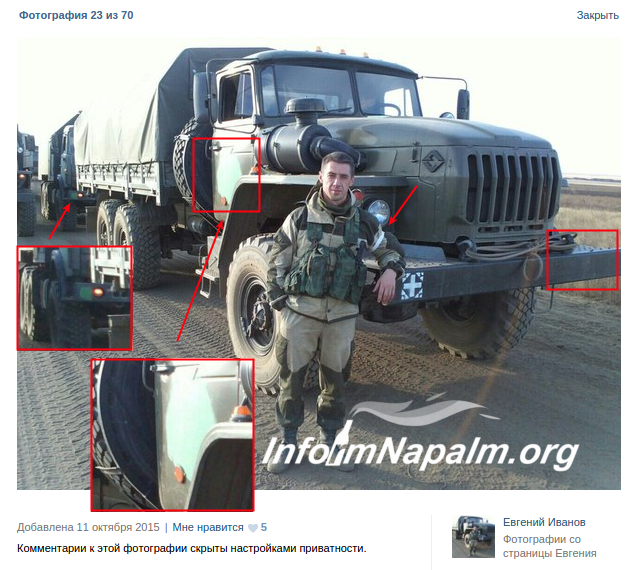 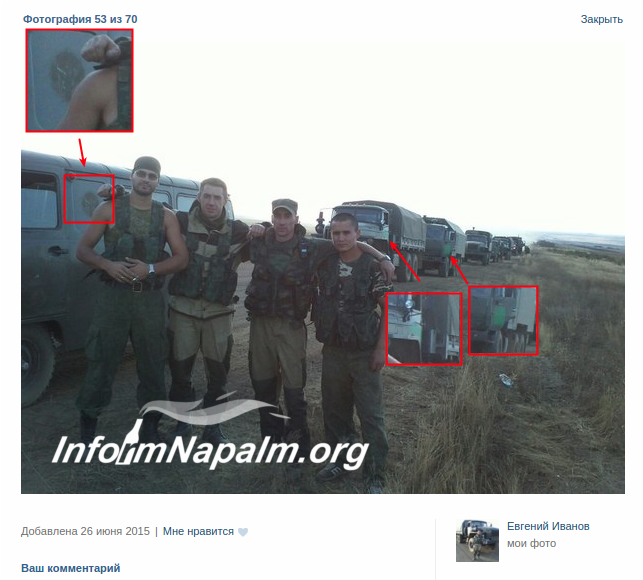 In the picture below we can see typical ‘miners’ who try to hide in the woods a command vehicle on ‘KamAZ-43114’ basis, presumably already in the Ukrainian territory. You won’t find here any license plates, formal uniform or any identification signs on the equipment. Tourniquets are winded on stocks, AK magazines are fastened with tape. 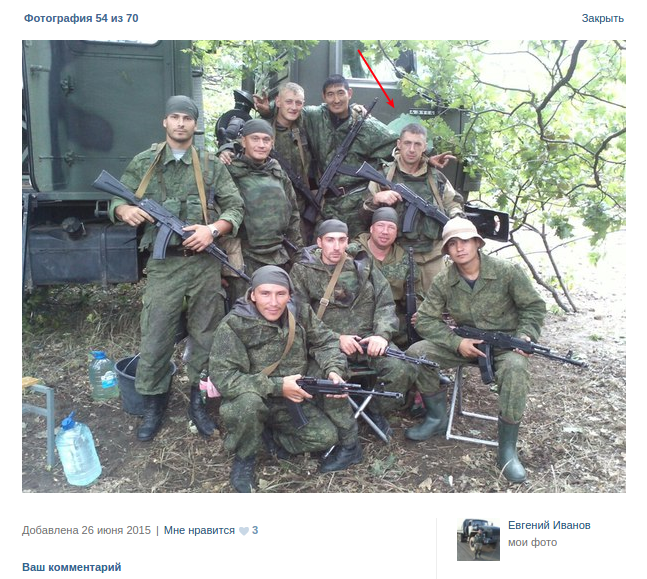 The last pictures show the process of equipment loading on a train (1, 2). The ‘peacekeepers’ came back from the assignment and got medals for returning in one piece. 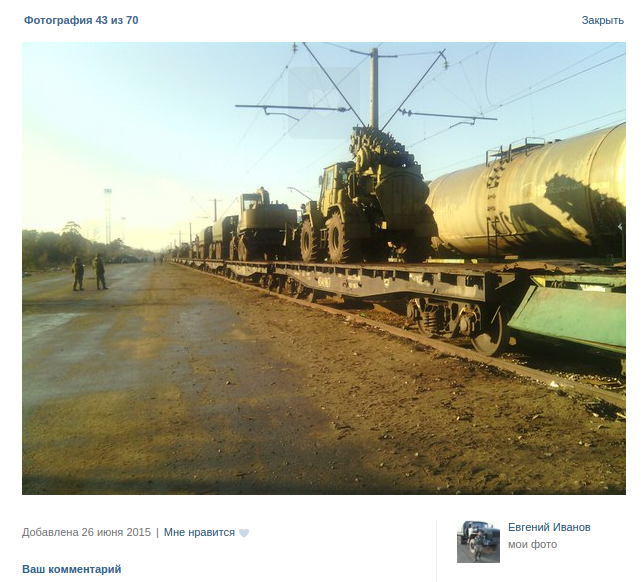 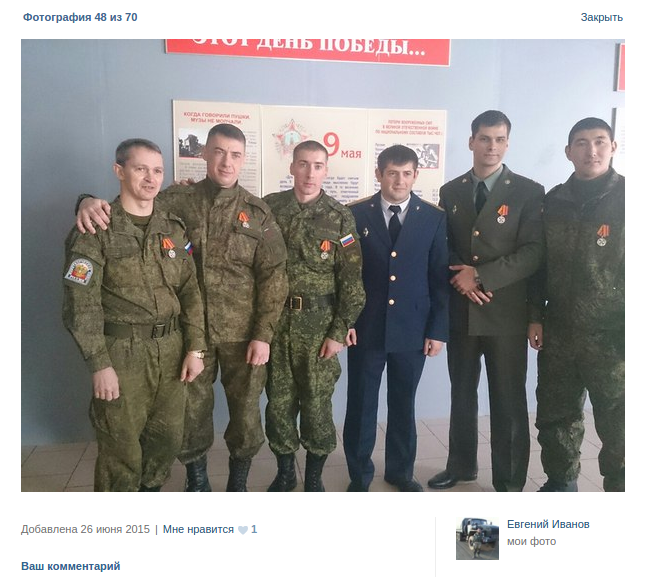 This is not the first time we register the ‘Rostov-Ukraine assignments’ of the 15th brigade. You can analyze their ‘tour of duty’ by these materials:
– 15th Motorized Rifle Brigade deployed to the Ukrainian border as an intelligence unit and “peacekeepers” at the same time

– Back to Basics: Russian Mercenaries Pretend to Be Peacekeepers

– Back to Basis – 2. Another Evidence of Russian servicemen mutation to militants and back

– Mourning ‘Peacekeepers’ of the 15th Brigade

– The 15th Brigade Contract Soldier Is Noticed in Krasnodon