It Is Hard To Survive in Syria Without A Passport. Russian 28th Brigade in Syria 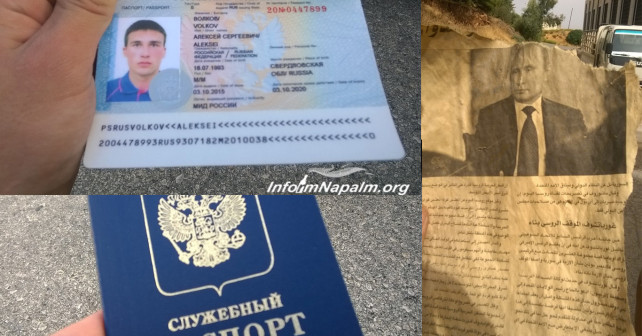 InformNapalm volunteer community has documented new facts of the Russian 28th brigade’s servicemen presence in Syria and their participation in the unofficial ground operation. New OSINT investigation exposed soldiers from Yekaterinburg, Russian Federation. Interestingly that the servicemen operate not only near their base in Latakia, but also in the Eastern direction – near Hama.

So, the first character is Aleksei Sergeevich Volkov (born on July 18, 1993), a contract soldier. Probably due to his happiness about soon returning to home he has uploaded several interesting pictures to his social profile:

1.1 Aleksei has a set of photos with ‘Hama Governorate‘ geotags taken near a village of Deir Shamil. A newspaper in Arabic with a photo of ‘great leader’ with Syrian landscape in background draws our attention. Another photo from Hama province with his brother-in-arms is also available.

1.2 At the moment of the article preparation Aleksei was still uploading fresh photos from Syria – you can find them here and here (the exact location is not known). More soldier were identified thanks to these pictures. We will talk about them later.

1.3 As for the connection to Hmeimim airbase area, the most interesting points here are the international passport with the personal information about the serviceman (20 #0447899, issued in Sverdlov Oblast, etc) and the cover of special service passport (which is given to the Russian soldiers when they serve outside Russia). We think that thanks to this passport’s data it is possible to find this soldier and even take an interview. 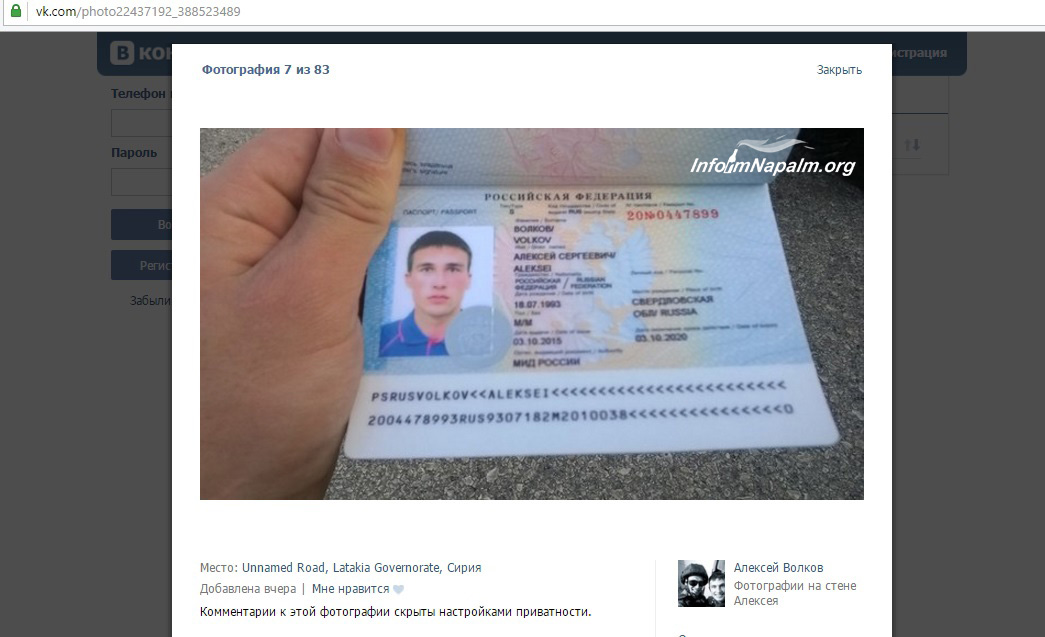 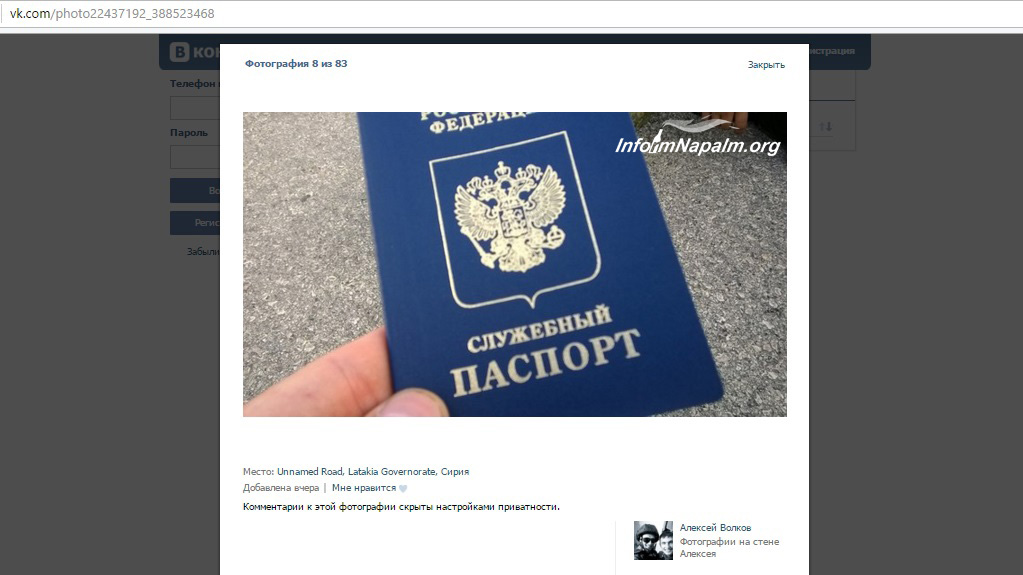 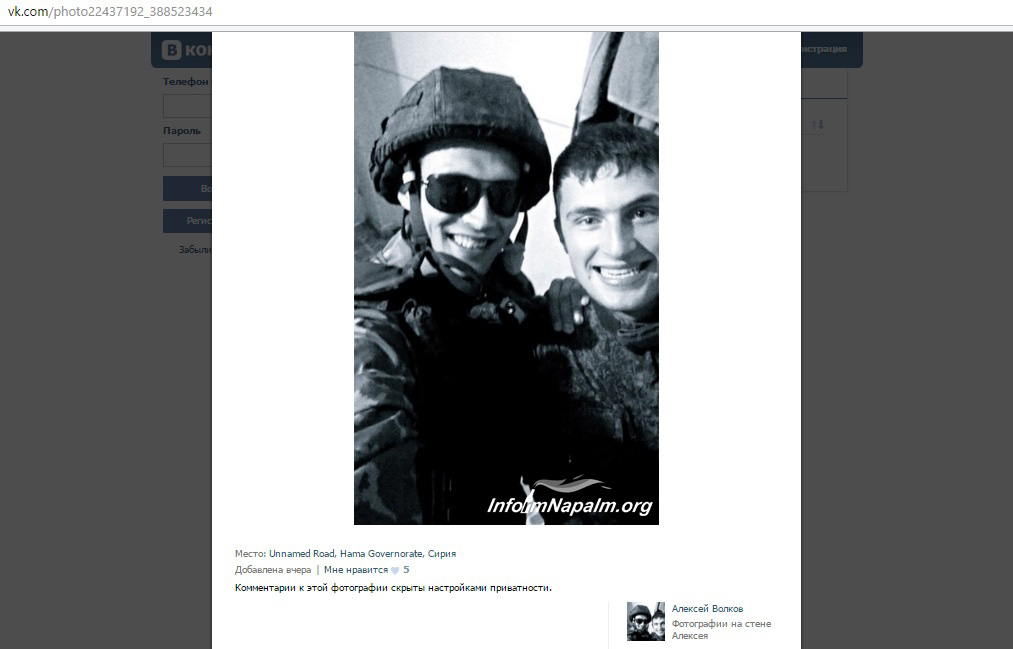 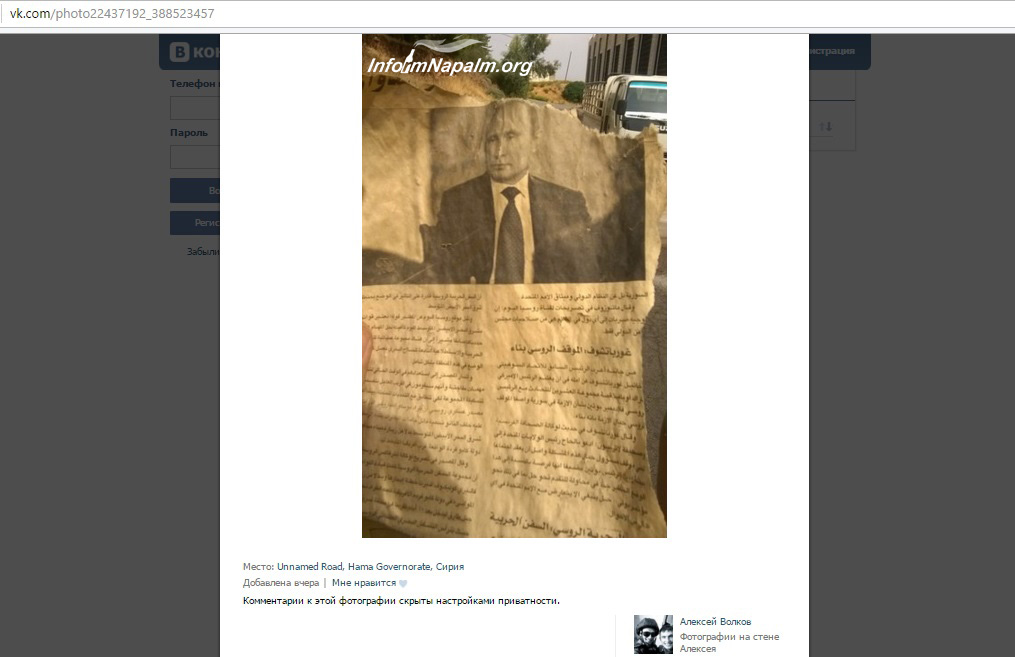 1.4 There is another point about the assignment. Aleksei went to Syria around October 3-4 (the group photo named ‘Flying away’). And now on November 9, a month later, another photo named ‘Home’ was uploaded. We can assume that at least some of those soldier went home on a short vacation. 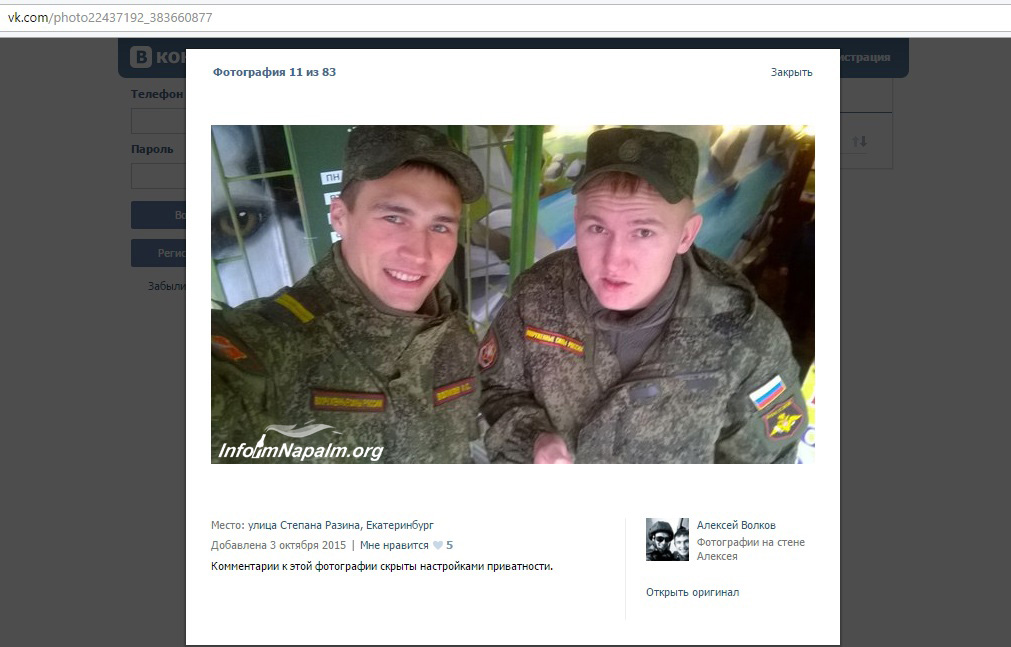 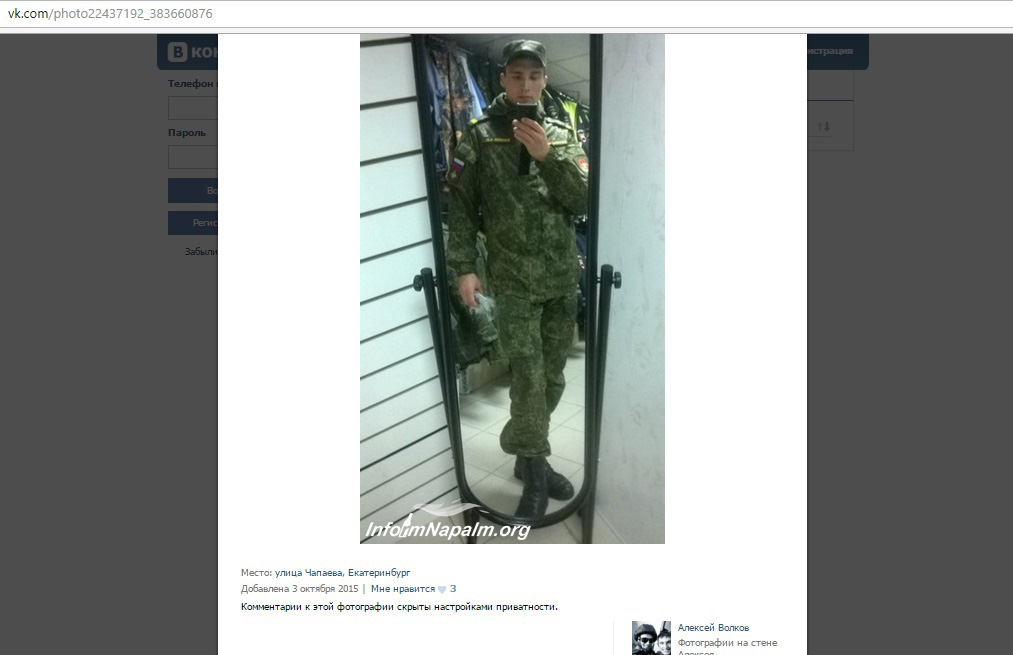 The Central Military District’s badge can be clearly seen in this selfie. We are still working on identification of the military unit, but for now we think it is the 28th separate motorized rifle brigade (military unit No. 61423). There are several pictures made in Chapaeva, Shcherbakova and Stepan Razin streets (servicemen were walking there and shopping before departure) and this is close to the 32nd garrison town (the 28th brigade).

The second soldier is Vyacheslav Sergeevich Razin (born in Perm on October 17, 1991) also from Yekaterinburg. He served in the Internal troops (military unit No. 7459) as well. Starting at least from May of 2015 Vyacheslav is a contract serviceman – see here or here. 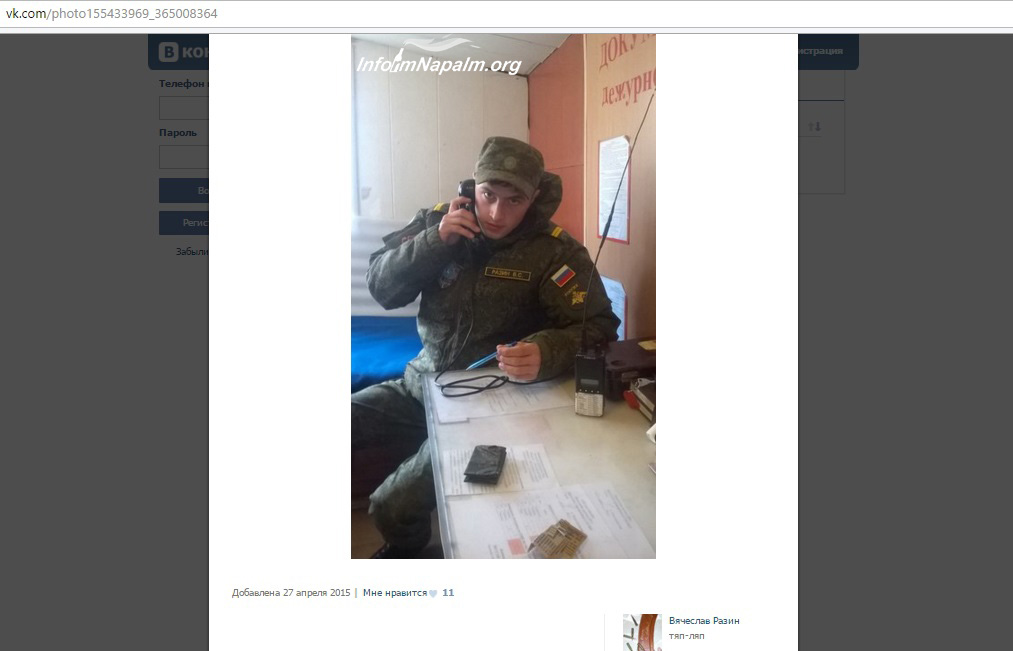 Now Razin is in Syria – take a look at the photo where he wears the desert camouflage. Thanks to the identical pictures we found out that Razin belongs to the same unit as Volkov (compare these photos). He has also some juicy information about the equipment and everyday life of the Russian military. 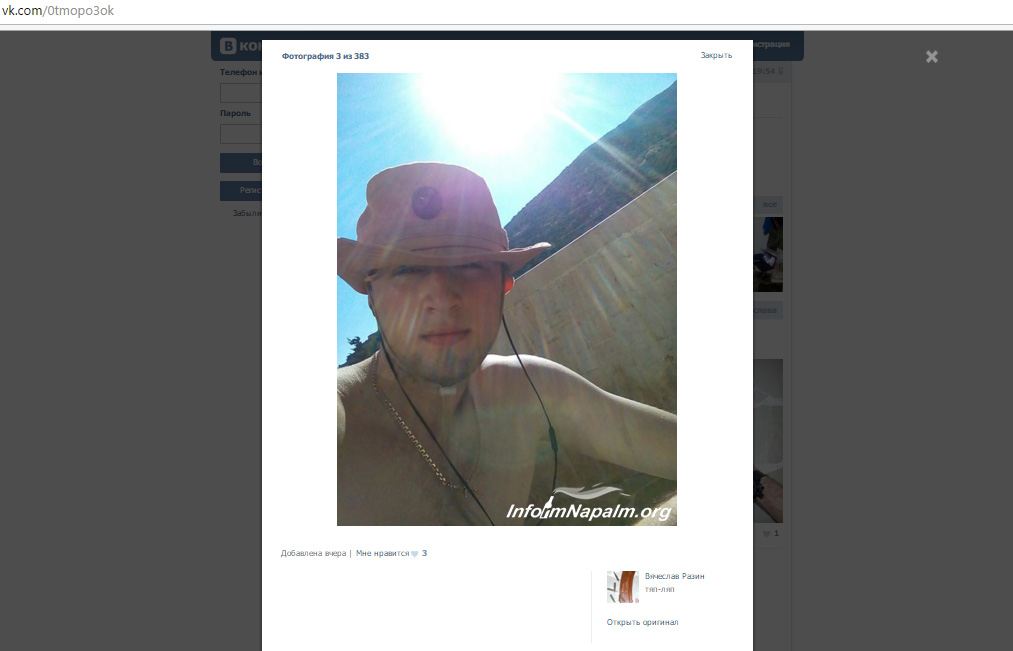 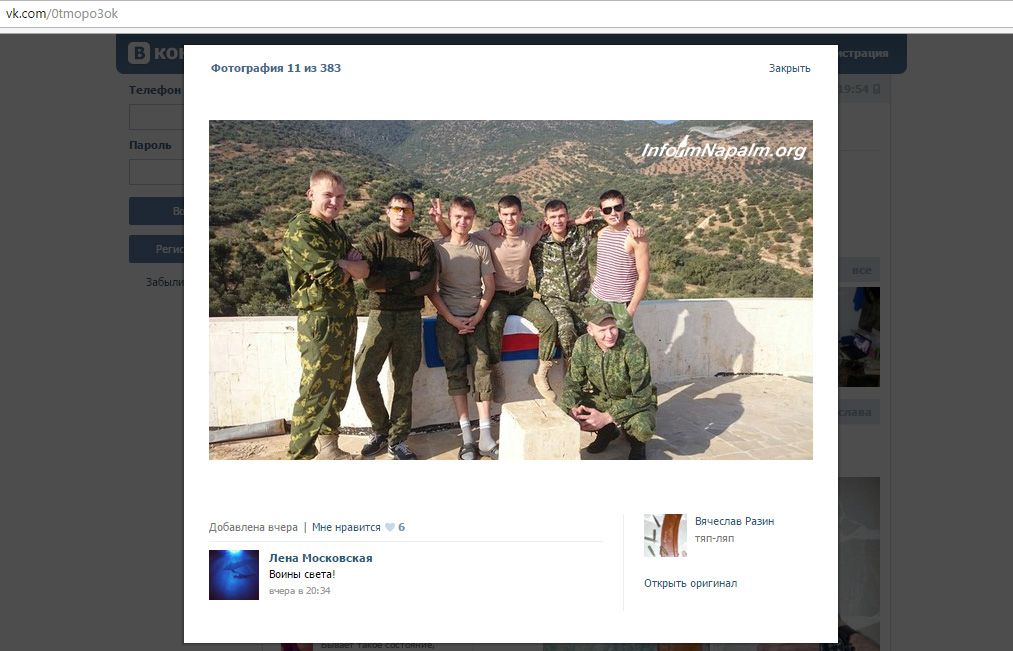 2.1 As for the equipment, we were pleased to find a set of pictures with Russian soldiers posing in front of GAZ-2330 ‘Tigr’ armored vehicle. Of course, it had no military insignia (photo 1, photo 2, photo 3). 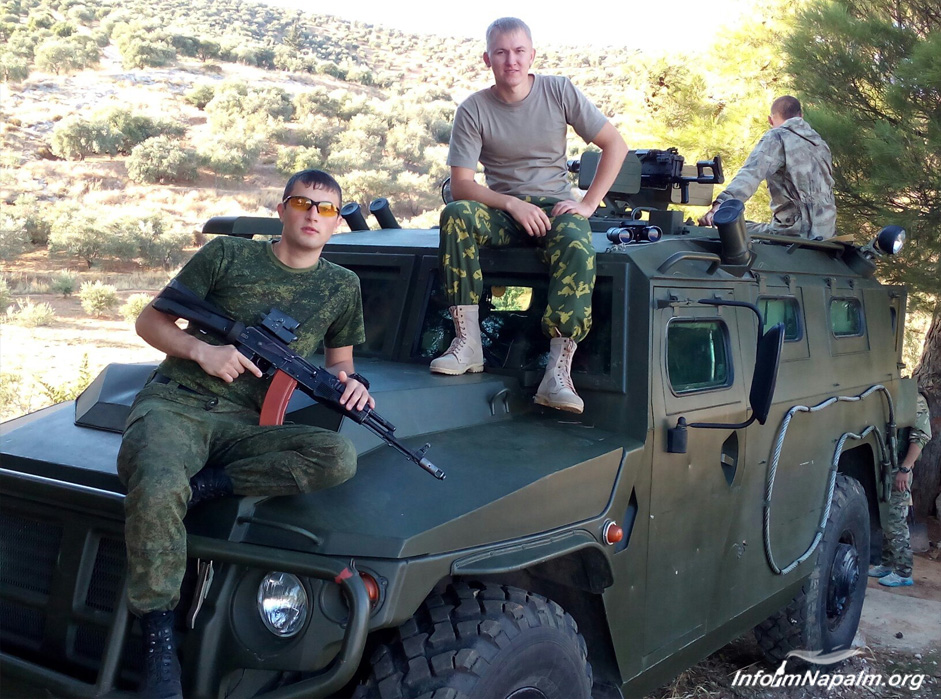 2.2 The terrain is mountainous. It is important to note that the Russians have a kind of checkpoint or outliers – we can see ammo crates, bags, etc. We identified the location of the village and this checkpoint. 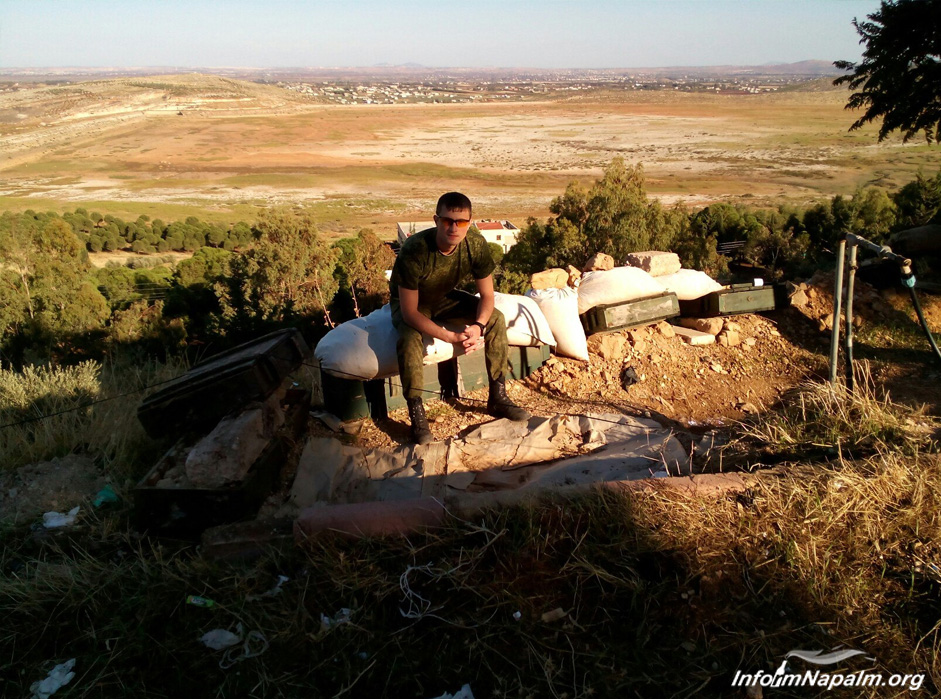 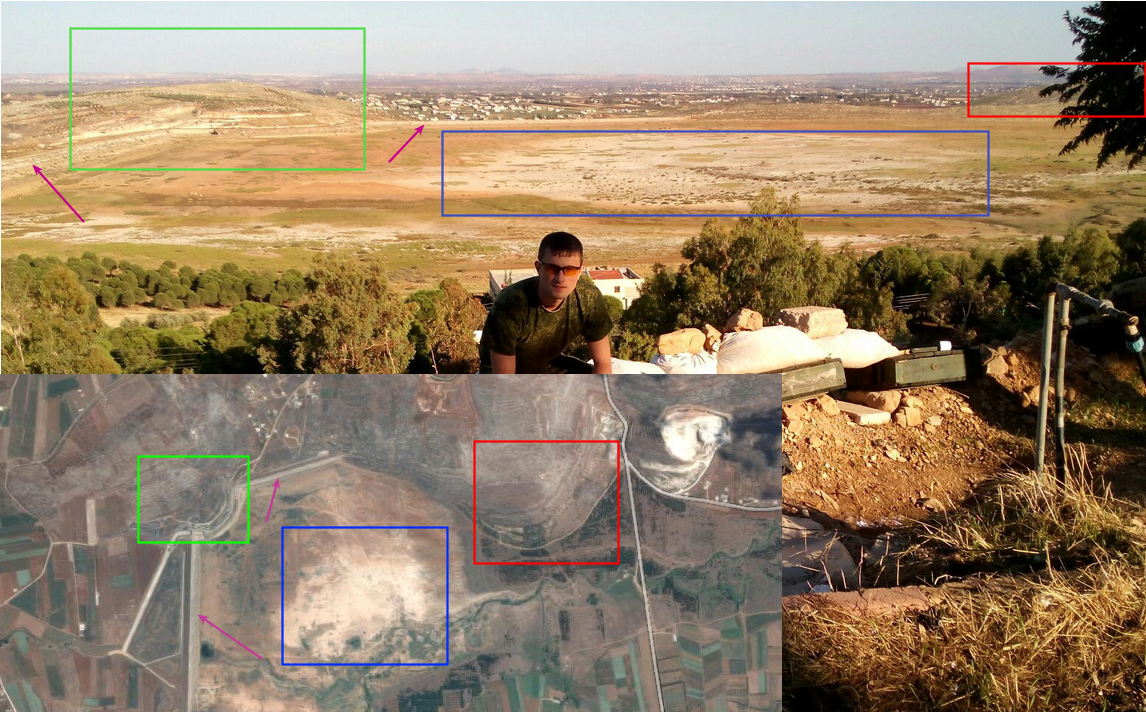 2.3 Here we have a picture of how the soldiers spend their free time. Anyway it is good the servicemen feast their eyes on the beautiful ladies and not Putin. And this is the group leisure (with posters of a man looking like al-Assad). …maps and ammunition… The Syrians should pay attention to the mocking inscription ‘from Perm with love‘. 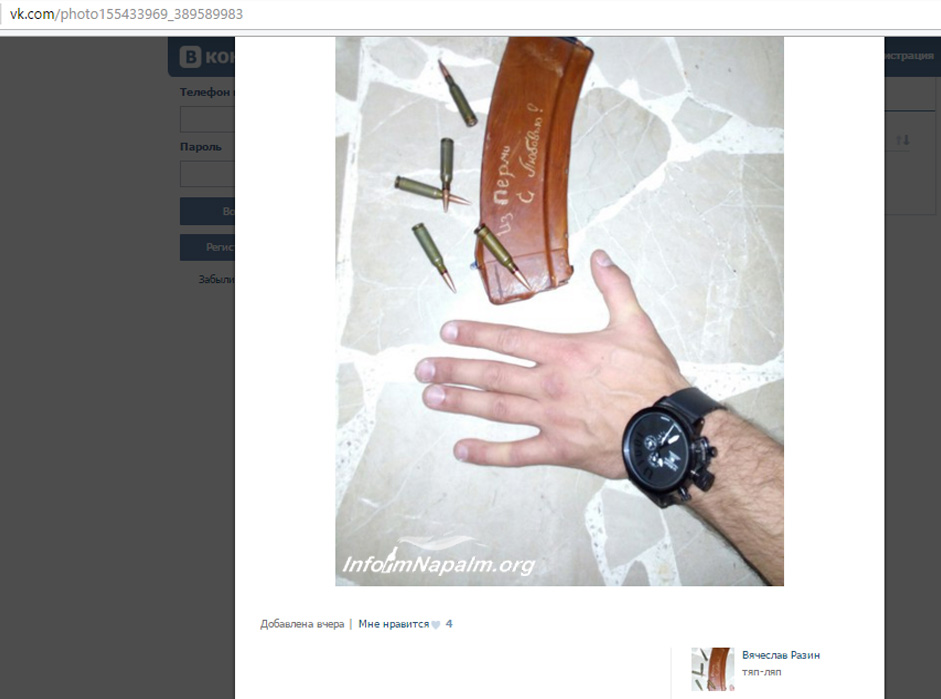 2.4 Finally, the picture of Razin with his comrade. Please note that the Russian soldiers often wear the green uniform. 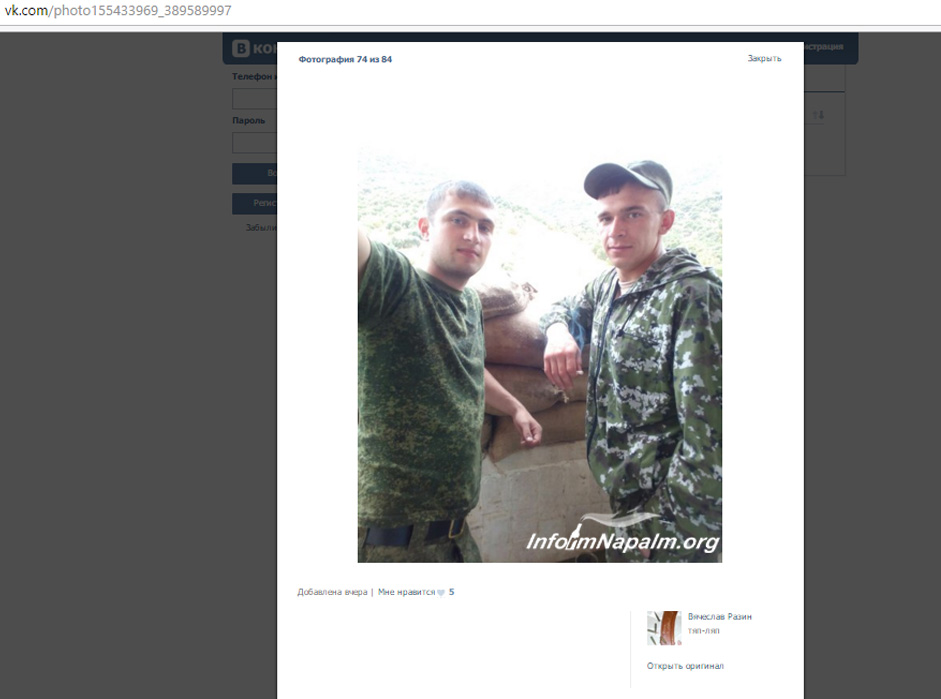 The third soldier identified on the group ‘Syrian’ photo was a soldier with nick name ‘Tolyan Dimkovich’ from Yekaterinburg. There is no much information about him, his blog misses data on his ‘Syrian assignment’ – only the photos from the army service in Russia are available:

And this is the video clip of the combat actions in Latakia. The rebels captured the new Russian helmet and new ‘Ratnik’ [Warrior] bulletproof vest which is in service of the Russian army only. No insignia, of course. In general, it looks the same as with the ‘men in green’ in Crimea. The only difference – they were met here with machine-gun bursts.

28 Responses to “It Is Hard To Survive in Syria Without A Passport. Russian 28th Brigade in Syria”