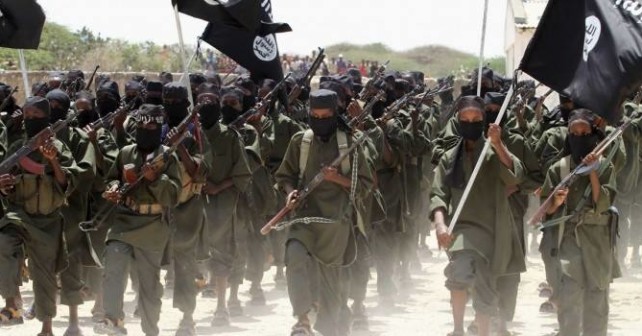 A coalition as an Indulgence

Last September, at the 70th session of the UN General Assembly, Russian President Vladimir Putin called for creation of a broad international coalition against the terrorist organization ‘Islamic State’ (IS), also known as the ‘Islamic State of Iraq and the Levant’ (ISIL), Islamic State of Iraq and Syria (ISIS) or Daesh. Putin said about the nature of the proposed coalition: “Similar to the anti-Hitler coalition, it could unite a broad range of forces that are resolutely resisting those who, just like the Nazis, sow evil and hatred of humankind”.

For attentive international observers there is no reason to suspect that the Kremlin fears the Middle East terrorist organization or accepts international ‘evil and hatred of humankind’. The events that happened 70 years ago are more important for Putin than the ‘Islamic State’. The anti-Hitler coalition mentioned by Putin not just defeated the Nazis; it gave Stalin-the-Cannibal a right to decide the fate of the post-war world at the same table with the leaders of the developed nations. For four decades, countries of Eastern Europe (Poland, Hungary, Czechoslovakia and others) came under control of communist Moscow with silent agreement of the West. This was a payment for participation of the USSR in the anti-Hitler coalition.

The real goal of Putin’s ‘anti-ISIS coalition’ is to return the reputation lost by Russia after its aggression in Crimea and Donbas. If things go well, the Kremlin can count on the consent of the West for the status quo in annexed Crimea, and even the recognition of the whole Ukraine as the Russia’s sphere of influence. As a philosopher wrote, history repeats itself, the first as tragedy, then as farce. The difference between Nazi Germany and the ‘Islamic State’ is about the same as between a spring torrent and a leaking faucet in the kitchen. So, to give a convenient enemy considerable political weight (otherwise what’s the point in the coalition?), Putin’s regime has to play giveaway with the IS.

Most obviously it happens in Syria. Moscow announced a military operation of the Russian Aerospace Forces against anti-government forces in Syria. Contrary to Kremlin’s propaganda, the main targets of the Russian Air Forces are not troops and infrastructure of the ‘Islamic State’ but localities under control of the Syrian opposition.

It is less known that in similar fashion Moscow destroys competitors of the ‘Islamic State’ in its own territory. But first, a little history.

From the Republic of Ichkeria to the Caucasus Emirate

The two Chechen wars (of 1994-1996 and 1999-2009) did not bring peace to the Caucasus. The underground resistance to the federal government that took the form of guerilla operations continues to this day. The ideology of the armed underground has undergone significant changes: today’s enemies of the FSB and the Interior Ministry are no longer Chechen nationalists, but the Salafis (Islamists) often referred to by the Russian television as the ‘Wahhabis’.

The last president of the Chechen Republic of Ichkeria (ChRI) Dokka Umarov has changed the goal, the objectives, and the ideology of the military struggle. In 2007, he abolished the Chechen Republic of Ichkeria and its presidency and proclaimed the Caucasus Emirate (CE), thereby outlawing ‘all ethnic, territorial and colonial zones named North-Caucasian republics’. He declared himself the ‘Supreme Amir of the Mujahideen of the Caucasus’. The Emirate is claimed to be composed of five operational and administrative entities: Vilayat Dagestan, Vilayat Nokhchicho (Chechnya), Vilayat Galgaycho (Ingushetia and North Ossetia), Vilayat Nogay steppe (Krasnodar and Stavropol Territories), and the United Vilayat of Kabarda, Balkaria and Karachay. The Vilayats are headed by the valis appointed from the amirs of the autonomous ethnic military units, or Jamaats. The Caucasus Emirate is headed by the Supreme Amir vested with extremely ample powers. The members of the CE underground are fighting not for their national rights, but for the establishment of the Sharia law in all territories of the self-proclaimed state.

The CE is known for its terrorist methods, including attempts against FSB, MIA and prosecutor’s office employees and bomb attacks on civil transport and the infrastructure of the Russian law enforcement agencies, sometimes using suicide bombers. The ‘Forest Brotherhood’ do not shun blackmail and threats directed at the businessmen who refuse to pay the ‘revolutionary tax’, or zakat.

The experts tend to believe that the CE is under the ideological, material and technical influence of al-Qaeda. In 2010, the UN Security Council included the Caucasus Emirate in the Al-Qaida Sanctions List. At the diplomatic level, Moscow has taken full advantage of the thesis that its fight against the Caucasian Mujahideen is part of a broader warfare against the Islamic terrorism that is waged by the entire civilized world since September 11, 2001.

In the face of total absence of civil rights and violation of basic human rights in the Northern Caucuses’ republics by RF, the ideas of Emirate prompted strong response in the hearts of a large number of young people. Due to the overall hopelessness and arbitrary rule combined with high demand for justice, the CE was not really short of human resources, for every new case of unlawful acts on behalf of security forces send young men into the woods looking for justice. 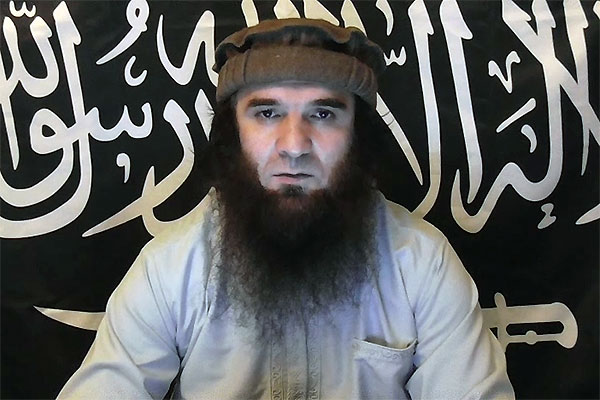 It went on like that until the ISIS appeared in the Middle East. In the summer of 2014 the ‘Islamic State’ held a number of successive offensive operations in Northern Iraq and Syria. Development of real combat operations and victories of Mujahideen attracted more and more attention of Salafi youth in RF. Many people seriously considered the jihad in Syria with its expanses, real combat activities, clearly defined objectives i.e. everything the Caucasian mountains lack of.

Emirate ran into the staff scarcity, it was short of not just fresh recruits (which ISIS attracted to itself like a magnet) but experienced mujtahids as well, who had already gained combat skills in the Northern Caucasus and would join in jihad in Syria. The organization was getting weaker however the open conflict between CE and IS did not take place.

Everything got changed in November 21, 2014, when Suleyman Zailanabidov, one of the amirs (sharifs) of Dagestan Vilayat, swore an oath to ‘Islamic State’ caliph  Abu Bakr al-Baghdadi. Quite soon, some other amirs got out of CE control to join ISIS. Caucasus Emirate’s leaders broke their long lasting silence and appeared on the web with their video address in which the supreme amir of the Caucasus Emirate Ali Abu-Mukhammad (Aliaskhab Kebekov) accused his former companion in arms, who swore allegiance to ISIS, in the split-up and treason. The CE leader suggested the ‘dissenters’ to move to the territory under the ISIS control and appointed new amirs to replace them.

De facto, there are two parallel underground resistance operating on the territory of the Northern Caucasus: Caucasus Emirate and Caucasus province of ‘Islamic State’. The first one connected with ‘Al-Qaeda’, holding in its ranks veterans of Russian-Chechen wars and monitored by the people having theological education along with combat experience. According to experts, the Supreme amir of the Caucasus mujtahids Aliaskhab Kebekov had a reputation of ‘vegetarian’ in the underground: forbidding women bombers, banning attacks on civilian targets etc. However the IS followers in the Northern Caucasus territory did not declare not practiced such kind of particularity about warfare methods. Those mujtahids who have sworn the oath to the ISIS got the reputation of active and merciless militants. Kebekov’s ‘soft’ line did not satisfy ‘hot head youngsters’ and that became one of the reasons of personnel flow from CE to ISIS in the Caucasus itself. 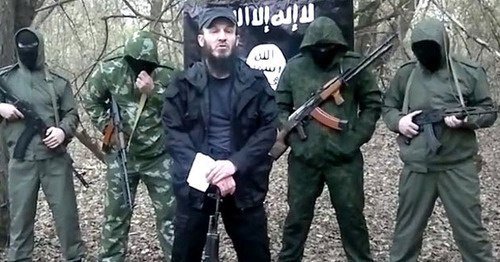 Simultaneously with the split in the ranks of the Caucasian Mujahideen the Kremlin outlined its position. Al Qaeda and its associated structures stopped being the ‘absolute evil’ and ceded its primacy to ‘Islamic State’. Now it has become possible for you to revealingly fight against the threat of Islamism if your opponent is ISIS. So, to bring the situation in the Caucasus in accordance with the desired media image, the power structures of the Russian Federation began to progressively reduce the Emirate’s organizational network.

The supreme Emir Ali Abu Muhammad (Aliaskhab Kebekov) was killed in a battle with the FSB special forces on April 19, 2015. His successor, Abu Usman Gimrynsky (Magomed Suleymanov), lasted less than a month, and died fighting the Russian military in the village of Gimry (Republic of Dagestan) on August 11, 2015.

Starting from June 1, 2015, the Russian security forces have killed 82 members of the Islamist underground. This includes 38 members of the Caucasus Emirate, 42 militants whose organizational affiliation has not been established, and 2 fighters of the ‘Islamic State’. The figures are based on the cross-checked data provided by ‘Kavkazsky Uzel‘ [Caucasian Knot] and ‘Kavkaz-Center‘ [Caucasus Center] sites. Those 42 fighters, whose organizational affiliation is not established, include also the victims of the so-called return fire by security forces who shot vehicles from which the alleged militants opened fire. It is very difficult to confirm or deny victims’ belonging to the underground.

Such disparity in losses is difficult to be explained by an accident, given that in the regions of the active Islamist underground activities (Dagestan, Chechnya and Ingushetia) the number of the Mujahideen of the Caucasus Emirate is about the same as the Mujahideen of ‘Islamic State’. Moreover, the CE is facing a severe personnel crisis and has greatly weakened in recent years. At the same time, Moscow invests efforts in elimination of the leaders of the CE’s network: two leaders of this organization and a number of mid-level commanders of the underground were killed in a short period of time. 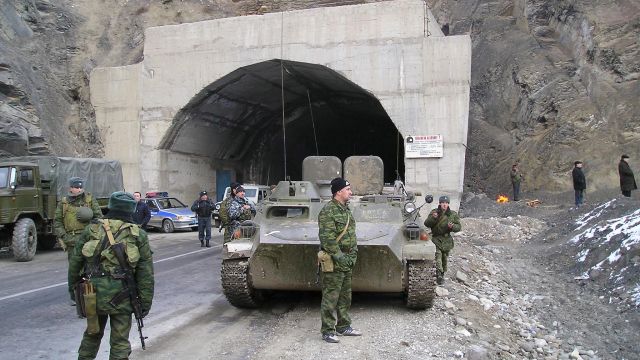 Russian security officials at a road tonnel near Gimry (Dagestan)

Some experts tend to believe that Moscow has also resorted to the elimination of the CE’s representatives abroad. For example, Abdulvahid Edelgiriev (an administrator of ‘Kavkaz-Center’ site, a high powered person in the CE’s network and Naib of Vilayat Nokhchicho’s foreign representative) was shot in his own car not far from his place of temporary residence in Istanbul on November 1, 2015.

Based on this information it can be clearly seen that the Russian security forces want to eliminate the CE’s underground. The most cynical in this is that Moscow not only consistently destroys competitors of ISIS in the North Caucasus, but also that the operations against the Caucasus Emirate are presented as ‘blows to the thugs’ of ‘Islamic  State’. There was a fight between the Interior Ministry’s special forces with FSB and a group of Mujahideen in Gimry village in Dagestan on October 24, 2015. As a result, 36-year-old local resident Abdul Nustafaev was killed. The National Anti-Terrorist Committee (NAC) of the Russian Federation stated that the victim was a member of the ISIS. At the same time this information was denied even by the Russian experts Orhan Jemal and Mikhail Roshchin who are quite loyal to the Kremlin. The killed was an Emirate’s militant.

Thus, the destruction of competitors of ‘Islamic State’ is presented as ‘fight against the ISIS‘. It is difficult not to recall Syria, where the Russians ‘conduct strikes on IS’ in areas where are no ISIS’s militants.

To summarize, we can assume that Moscow has set itself the goal to permanently remove Caucasus Emirate from the ‘Caucasian Chessboard’. Because a longtime struggle with the local resistance movement, which openly condemns the methods and means of ‘Islamic State’ does not fit into Putin’s new ‘anti-Hitler coalition’ scheme.

One Response to “Moscow Formats North Caucasus as the ISIS”