Corporate raids and terrorism of Russian Federation. “Boyko’s Rigs” as an indicator of maritime military challenges 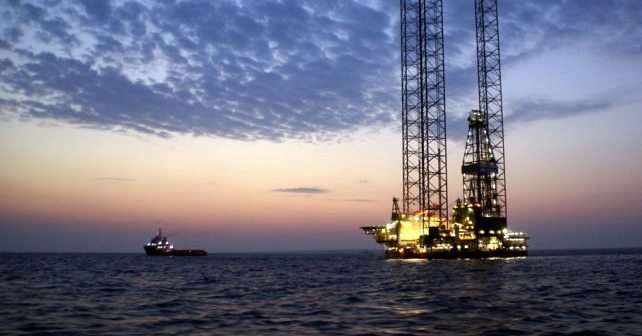 The war between Russia and Ukraine doesn’t take place only along the demarcation line in the Donetsk and Luhansk regions. The Russia-annexed Crimea and the territorial waters of Ukraine, especially its maritime economic zone, are also areas of active military and political confrontation. About it not to talk aloud, because unlike the ATO area where politics and the media often shift the focus from the Russian aggression towards separatism, then the invader appears in its true form and demonstrates a disregard for all norms of international law and treaties. The occupied Crimea is being transformed into a militarized zone and a staging ground for Russian “muscle-flexing” that threatens not only Ukraine, but also other countries of the Black Sea region.

Russian Federation not only occupied and annexed Crimea but also captured Ukrainian property in the Black Sea. The international volunteer community InformNapalm conducted several OSINT-related investigations of  illegal armed seizure of two jack-up rigs “Peter Godovanets” and “Ukraina”, owned by the Ukrainian company “Chornomornaftohaz” and better known in Ukrainian media as “Boyko’s rigs”.
Our first investigation showed that soldiers of the 104th Airborne Assault Regiment of the 76th Airborne Division of the Russian Army participated in the seizure.

Read more in: Drilling Rigs of ‘Chernomornaftogaz’ Were Captured By The Russian 104th Regiment’s Paratroopers

In the third investigation of this series, an expert, the chairman of the supervisory board of the organization “Maidan of Foreign Affairs” and the Chief Editor of BlackSeaNews Andrei Klimenko  commented on the situation resulting from the Russian operation on removal of Boyko’s rigs and revealed its details.
InformNapalm also found that soldiers of the 126th Separate Brigade of coastal defense of the Russian Black Sea Fleet participate in the rotations serving on the rigs.

Read more in the material: ‘Boyko Drilling Rigs’ Were Found Thanks to Tugboat’s Tracks And Photos

Based on the volunteer investigation, on February 5, 2016, the member of Ukrainian parliament Andriy Teteruk submitted an official inquiry to several of the Ukrainian authorities, including the Office of the General Prosecutor, the Security Service, the Interior Ministry and the State Border Service of Ukraine.
Here are a few points from the official responses to the inquiry by the authorities (the full text of the inquiry and the responses can be found at link):

As we can conclude from the responses, the Ukrainian authorities are simply confirming the facts of seizures of Ukrainian property, while doing nothing to prevent them from happening. But let’s try to understand: could Ukraine prevent the removal of costly jack-up rigs and the illegal gas production at the Odessa field? What is the current condition of Ukrainian Navy and can it effectively respond to the invasion? Let’s be objective and analyze the situation.

The volunteers of InformNapalm community managed to interview a direct participant of the events related to the removal of the Ukrainian rigs from Odessa gas field in December 2015. Our interlocutor was Petty Officer 1st Class Nikolay Parkhomenko. 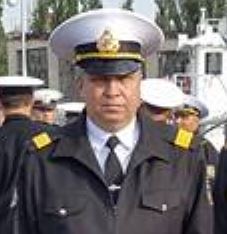 We met Nikolai thanks to  a publication on the website www.peoplesproject.com concerning a raid of the Ukrainian ship “Netishin” to the area of Odessa gas field. In the photo and video we can see the Project 12417 missile corvette”Shuya”, hull number 962, of the Black Sea Fleet guarding the area around the gas platform “Tavrida” which replaced “Boyko’s rigs”.

What do you know about the incident with the seizure of rigs in December 2015? Is it true that our border guards were intercepted by a boat of Federal Security Service and a missile boat of the Black Sea Fleet of the Russian Federation?

On December 12 2015, “Netishin” urgently put to sea with the location of the rigs as the destination of its mission. It was known that the capture of our rigs could be expected in this area. A similar mission was assigned to the ship “Pereyaslav” based in Ochakov. When we approached the rigs on December 15, our path was blocked by the project 22460 border patrol boat “Amethyst”, hull number 055. My commander on “Netishin” requested 055 to provide their goals and objectives in the area of our rigs. They answered that we should better leave the area. My commander reminded 055 over the radio that we were in Ukraine’s economic zone, but received a repeated order to withdraw. Next we were approached by the Russian missile boat “P-109” hull number 952, which, by maneuvering, demonstrated its readiness to attack us. We signalled battle stations alarm on board, while the Russian boat approached to a distance of 100 meters. We did not flinch, but we received the order from the Ukrainian South Naval Base in Mykolaiv to withdraw, and we left the area. Later it was reported in Russian press that on that day they “took away” the rigs. We did not see our ship “Pereyaslav” probably it was in an area where there were our other rigs. 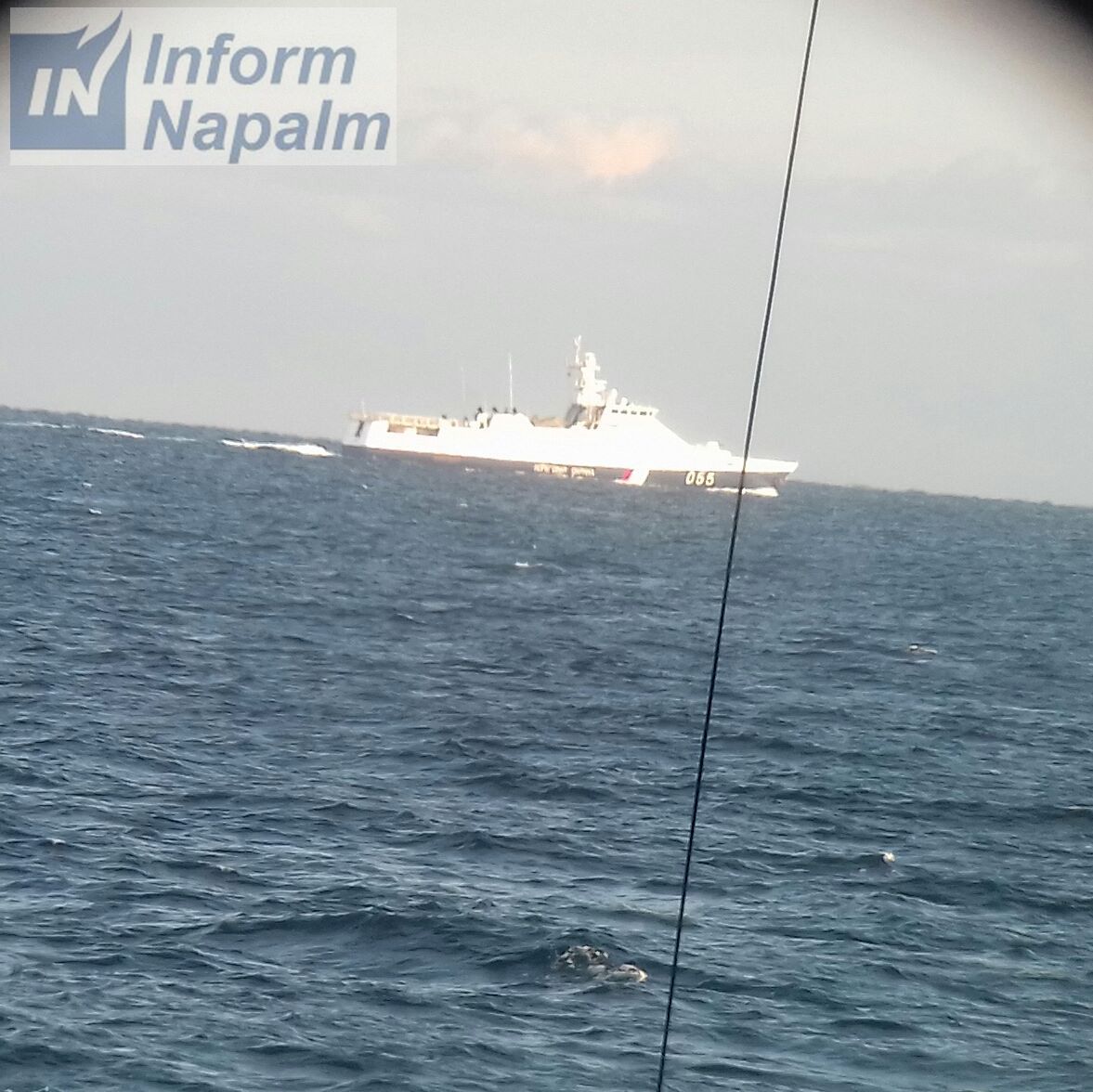 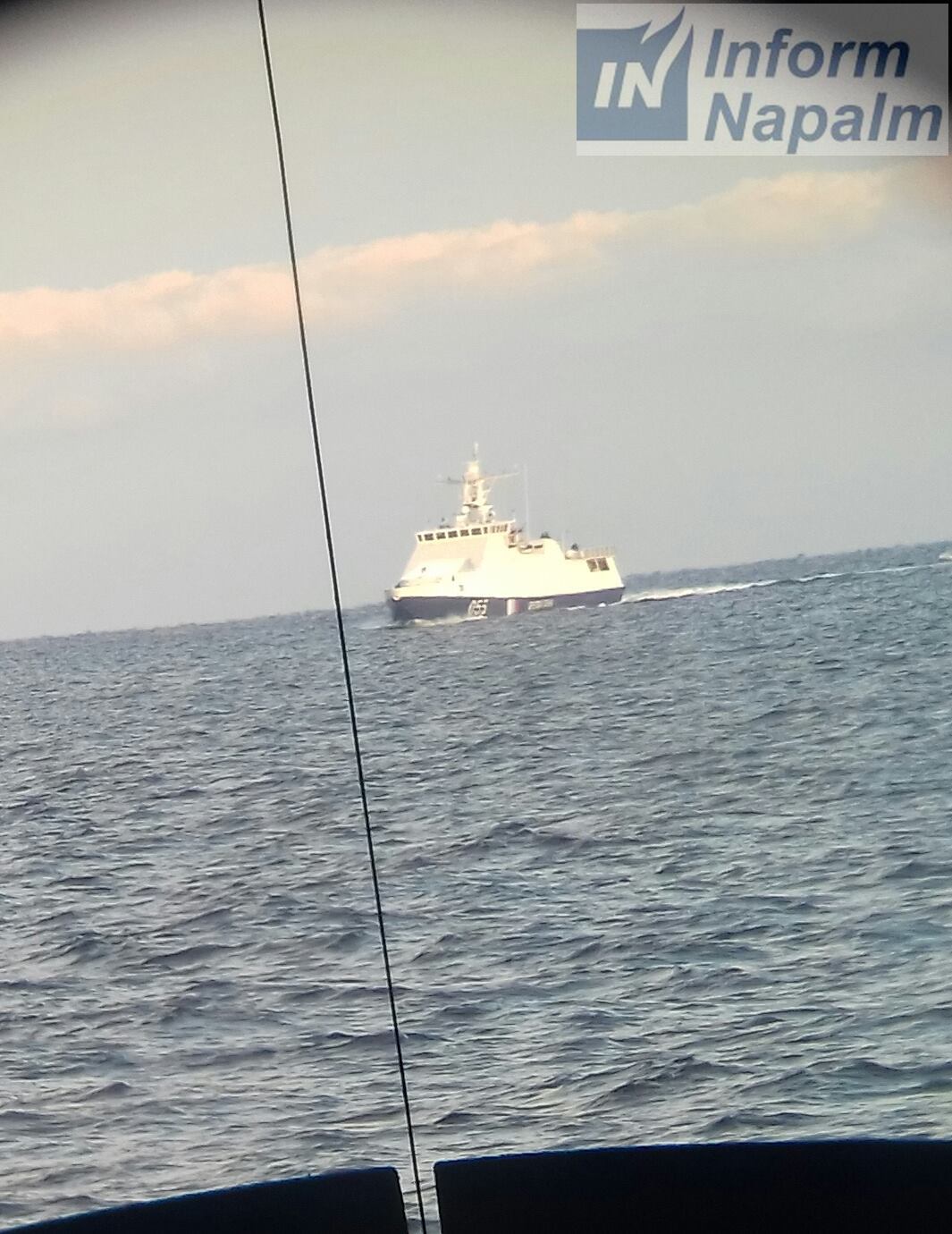 For reference:April 2, 2014 the Border Guard Department of Russian Federal Security Service was formed in the Republic of Crimea.

Since the annexation of the Crimea the fleet of the Coast Guard of the Federal Security Service has been renovated:

On October 13 2014 a group of four Project 12150 “Mangust” patrol boats, hull numbers 633, 634, 635, 636, arrived in Balaklava. Prior to that, border patrol ships of the Russian Coast Guard were on duty for the protection of sea borders around the Crimean Peninsula, but were not based in Crimea. 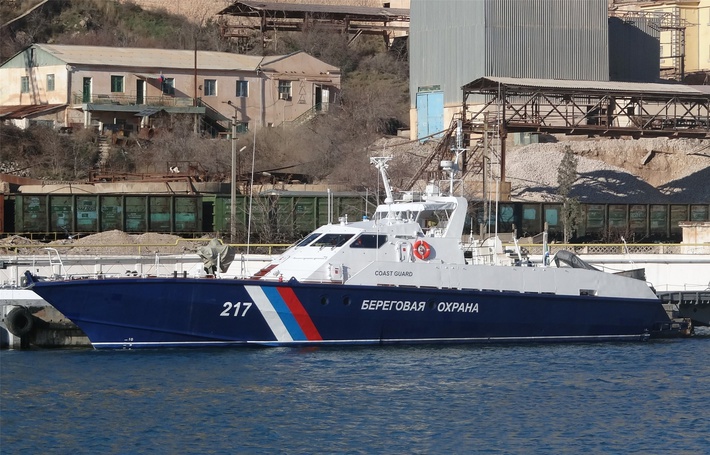 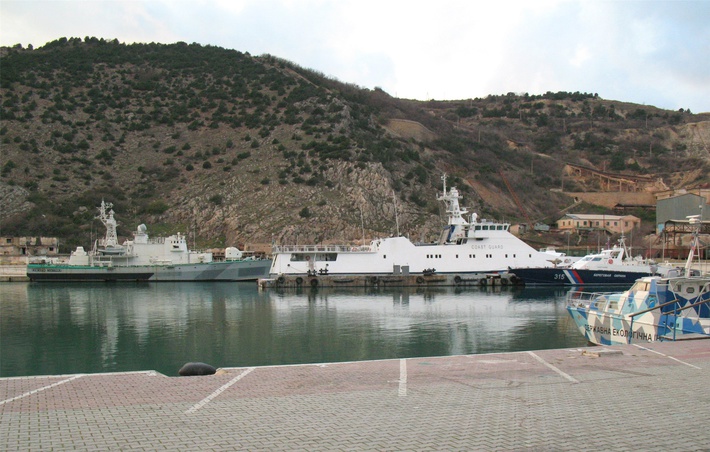 In April 2015, the Project 22460 patrol boat “Zhemchug”, hull number 503, was added to the Coast Guard fleet in Crimea. This is a small displacement ship capable of taking a helicopter on board and using it at sea. 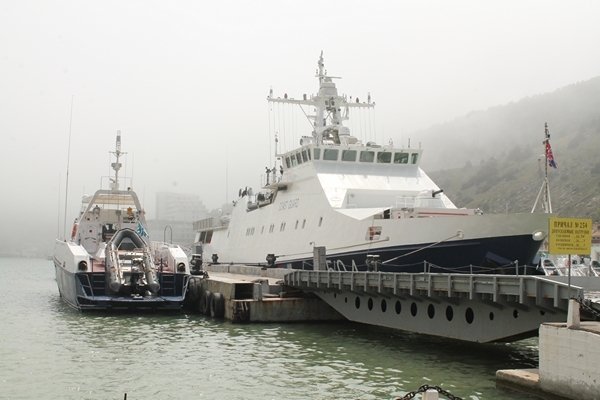 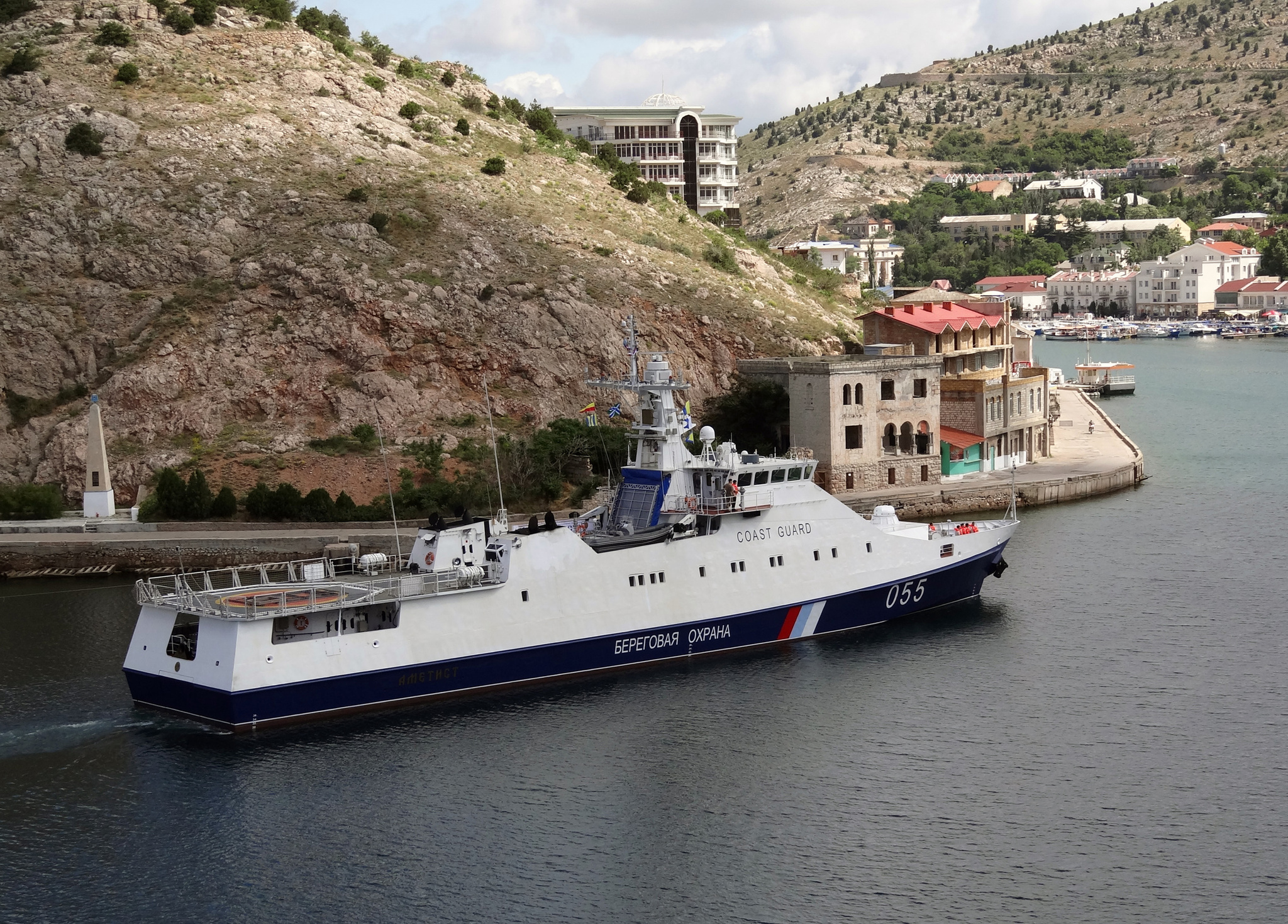 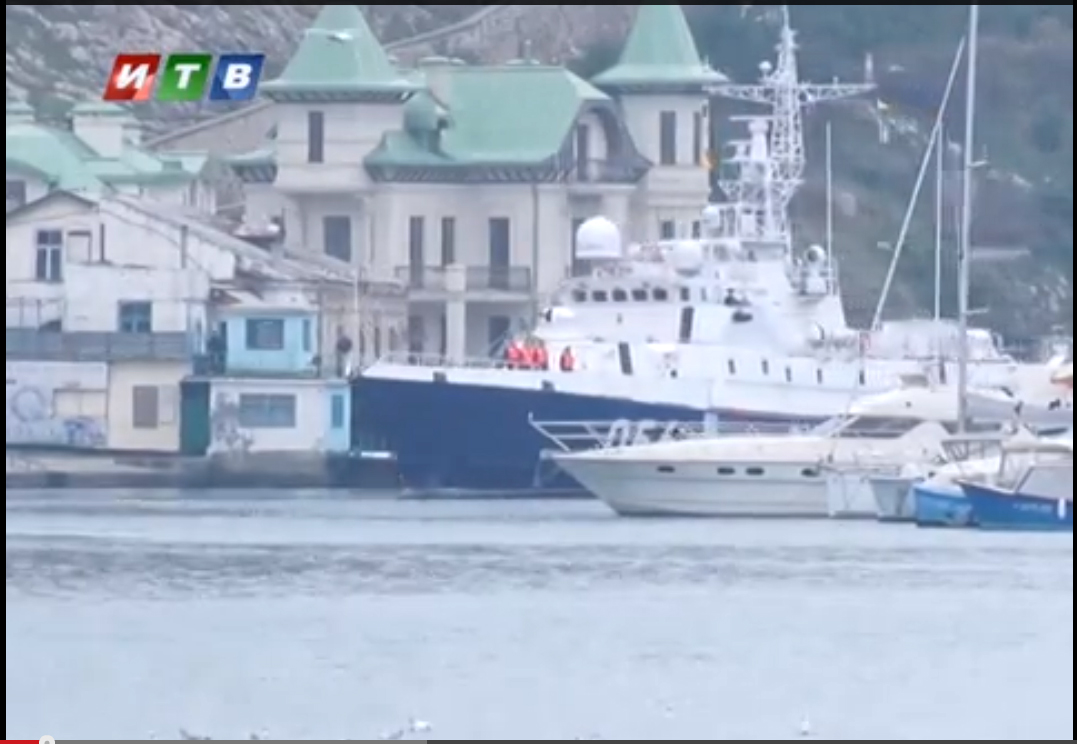 On November 25, 2015, the Border Administration of the Federal Security Service in the Crimea received the Project 10410B patrol boat “Svetlyak”, hull number 056. It is armed with two 30-mm AK-306 guns and two release gear.

In March 2016 it was reportedthat the Coast Guard units in Crimea were expecting deliveries of ten more ships and boats.

It is worth noting that on December 12, 2015 the naval base of the Black Sea Fleet in Sevastopol was supplemented with ships “Zelenyj Dol” and “Serpukhov” (project 21631), equipped with long-range missile complex “Calibr-NK”, infamous for the strikes on Syrian territory conducted from the Caspian sea.

Apparently our fleet, and especially its border security, is not in the best condition, if we put it mildly, while the Border Administration of the Russian Federal Security Service in Crimea has received a number of new combat boats over the past couple of years What kind of answer could Ukraine offer?

As I said before, during the incident with the seizure of our rigs by Russians we were met by two Russian missile boats: Project 12417, hull number 962, and Project 12411, hull number 952, which control the area, and the Federal Security Service patrol boat 055. At that time, on board the “Netishin” we only had one DShK heavy machine gun and 20 AKS-74, so we did not represent any threat to the Russian boats. The “Pereyaslav” was armed only with automatic rifles, therefore it was also not dangerous to the Russians. Today Russians de facto control the line almost up to the Zmiiny island.

How do border guards of the Federal Security Service and Russian military behave when Ukrainians attempt to approach the rigs?

During our latest trip, as can be seen in the photos, the Russian missile boat 962 pursued us and then followed us for two days. It also maneuvered to demonstrate that it was not desirable for us to approach the rig within 2 miles. As far as we know there are also Russian snipers on the rig.

Does the Ukrainian government pay enough attention to its fleet, and what do you think is missing?

I think, the ships that are now deployed at sea to guard the borders should be better equipped with monitoring devices, including AIS (Automatic Identification System – in navigation, a system used to identify vessels, their size, heading, and other data via VHF radio – ed.) and radars, and of course with weapons. When we go with machine guns against missile boats, it is just ridiculous. In April 2016, we expected to have two grenade launchers installed on our ship, we welded the mount points for them, but neither us ( “Netishin”) nor “Pereyaslav” ever received them. And it still remains this way.

That’s how sad the situation has been and remains in our maritime economic zone in the Black Sea. We hope for the best and that our fleet will be refurbished and modernized, not to mention the new ships.

Just recently Irina Fris, the head of the subcommittee on the security of government information systems of Verkhovna Rada Committee on National Security and Defense, noted that:The recently celebrated Day of Ukrainian Navy made us revisit our concept of the further development of the Ukrainian Navy and the feasibility of ordering new frigate class ships. Currently Russia is deploying the modern “Bastion” systems in Crimea, which greatly reduces the effectiveness of large ships. Thus in our economic conditions the strategy of the Navy development must first of all respond to the current challenges and the situation in the Black Sea… The preference for small, agile, fast attack ships should form the concept of the development of the Ukrainian Navy”.

But the question of security and respect of international law in the Black Sea region is a problem not only for Ukraine. The enemy that knows that its victim is not able to fight back acts more aggressively and boldly. Therefore the improvement of the equipment and military readiness of our fleet is a very serious question. The economy of Ukraine, which opposes the hybrid aggression of the world’s largest country, may not be able to quickly address the issue of procurement of ships and weapons at its own expense. But in regard to the issue of the protection of international law and the existing system of international security, many developed countries can and probably should support Ukraine. Ukraine is now in a situation when its territory is an obstacle to aggressive imperial ambitions. Once this outpost falls, the borders of other European countries will be exposed to such a dangerous neighborhood.

While national security experts continue their discussions and build their concepts of further restoration and equipping of the Ukrainian Navy, Ukrainians themselves have for a long time been raising funding to equip the navy. Through crowdfunding and incredible dedication of ordinary Ukrainians, who donated their savings to support the army, in 2014 we managed to stop the advance of the aggressor. But the battles for the liberation of the occupied and annexed territories are yet to come. Whether we fight in the battlefields or participate in political games, the Ukrainian Army must have the most modern and sophisticated weapons to deter the enemy that understands only the language of force.

But this is a global issue while in this particular case one can help to raise funds for the restoration of “Netishin”,which in addition to diving operations performs combat missions, monitoring the Black Sea.

Written by a volunteer of the international community InformNapalm Victory Krm

No Responses to “Corporate raids and terrorism of Russian Federation. “Boyko’s Rigs” as an indicator of maritime military challenges”