Secret cargo from Syria to Crimea: the saga of Nadalina. Part 2 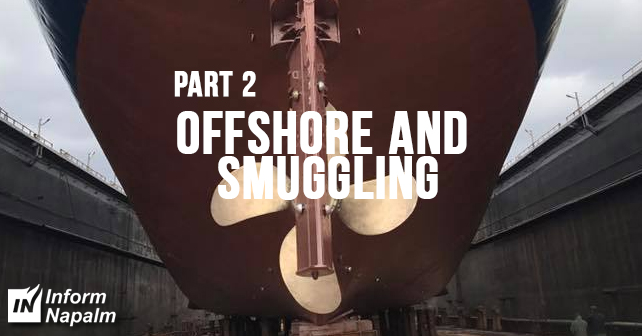 InformNapalm international volunteer intelligence community got on the trail of a secret cargo which was shipped from Syria to Crimea under very mysterious circumstances. It was unloaded at destination by Russian military personnel with utmost care and heightened security. This publication is a result of OSINT and HUMINT activity of our volunteer community.

The first part of our report will reveal the nature of cargo and walk you through other unexpected investigation findings:

Secret cargo from Syria to Crimea: the saga of Nadalina. Part 1

The second part of our report is devoted to the owner of the ship that transported the secret cargo from Syria.

The operator and owner of Nadalina (IMO:8215754) is an offshore company, Bia Shipping Co Ltd. (the Marshall Islands, 2010), headquartered in Constanța (Romania). This company is a part of a family business of Syrian entrepreneurs coming from the outskirts of Tartus. Bia Shipping Co. is an official partner of Johar Shipping srl. registered in Constanța (Romania) and controlled by the a Syrian family. Its owner is Hassan Johar, born in 1981. The members of Johar’s family live in Syria, Romania and the UK.

Despite the fact that Johar is not the official owner of Bia Shipping Co Ltd, he actually controls the company and is entitled to sign for it. Three key positions at the company are occupied by Adnan Hassan (Managing Director), Johar Hassan (Head of Operational Department) and Ferhad Hassan (Ship Chandler).

The social network analysis shows that Nadalina is supervised by Samir Fahel. Its pictures take up a significant portion of his posts on Facebook. Nadalina has been apparently named after his granddaughter, Nadalina Fahel (the company ships are mostly named after the daughters of a family member).

The relationship between Fahel family and Johar is clear from the diagram. Amin (Samir’s son), has a brother, Mahmoud Hassan, which confirms the kinship between the families. 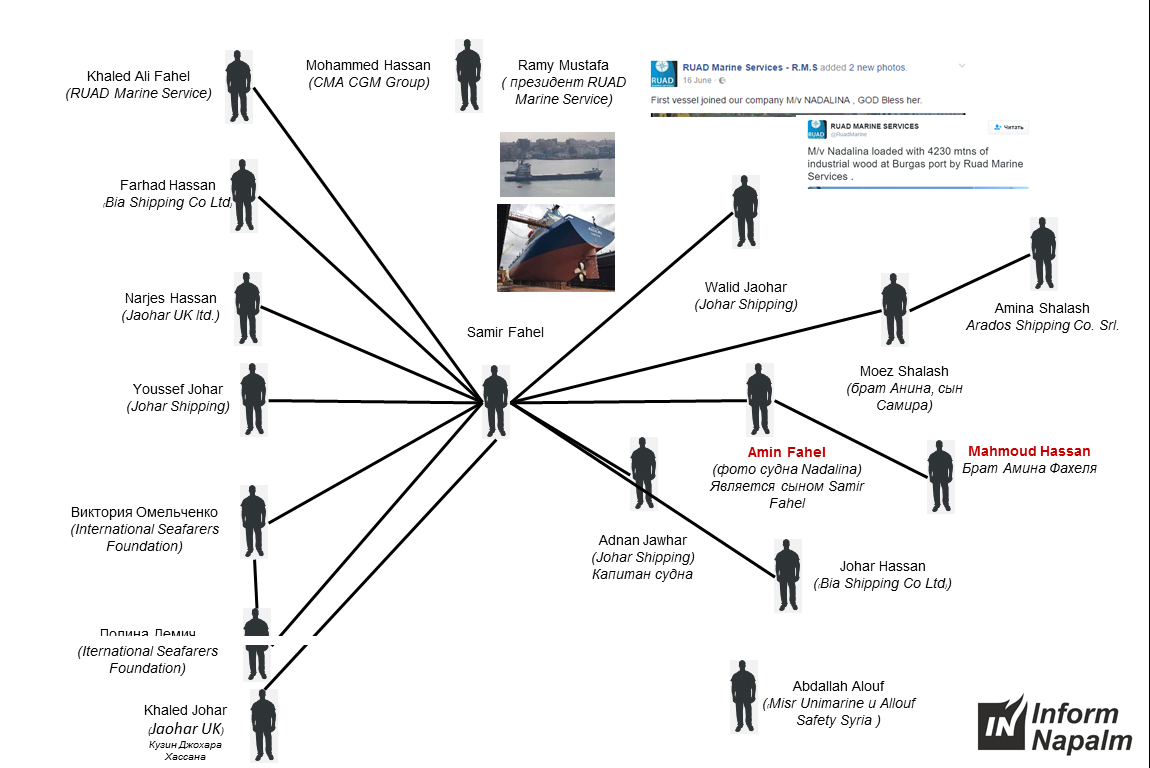 There are different ways to spell the name used for the companies of the Johar family: Johar/Jaohar/Jawhar.

Khaled Johar is a cousin of Hassan Johar. He lives in London and owns the company Jaohar UK. http://www.jaohar.com/ Its branch offices also operate in Constanța and Beirut. A partner of Johar Hassan is Abdallah Aluf, Chairman of the Board of Misr Unimarine, an Egyptian company, and Allouf Safety Syria (Tartus), as well as President of Dameko Shipping Company S.A. (PO Box 726, c/o Unimarine Management Co, al-Mina street, Tartus, Syria). Taking advantage of his private contacts at the Ministry of Transport of Syria, Aluf obtained security certificates which were used for illegal transportation of Syrian migrants to Turkey and Europe. 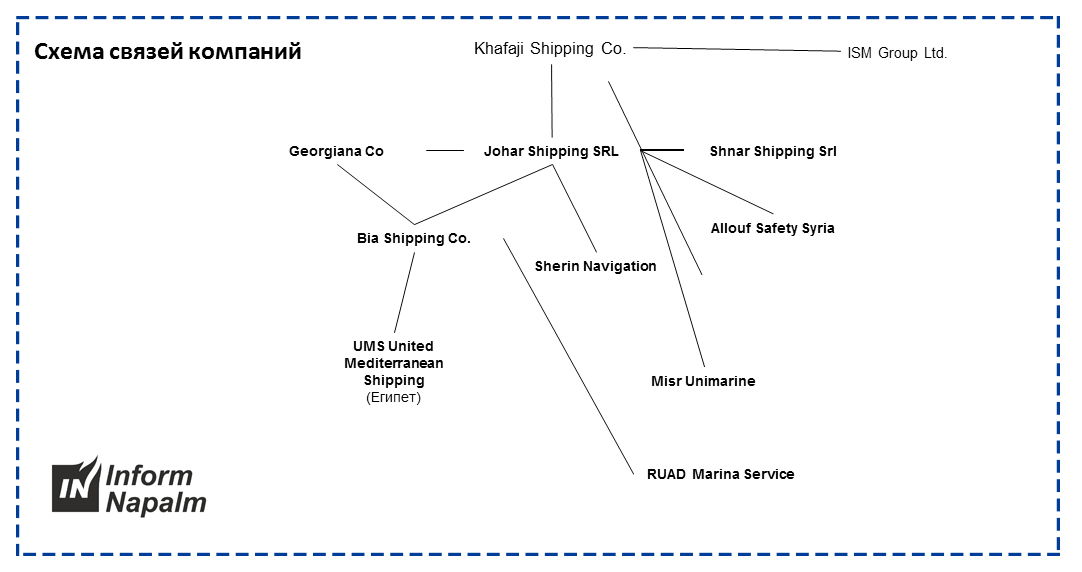 Abdul Rahman Hassan, 53, was arrested in 2014 in Constanța for smuggling of 40,440 cigarettes from Turkey to Romania while he was the captain of the vessel Rania H (in October 2015 he was convicted to three years and eight months in prison). According to the Prosecutor of Constanța, Abdul Rahman Hassan was also convicted for human trafficking after he facilitated the illegal entry of two Syrian Kurds into Romania.

On social networks the Hassan-Fahel family members appear indifferent to politics and it looks like they have no long-term ties with Russia. While being tacit Assad supporters, the family representatives do not express their political views in public.

At the same time, taking into account the level of counterintelligence regime in Tartus, calling at this port and receiving delivery/shipment orders from the territory of the Crimean Peninsula would with great probability require contacts/relations with the Syrian intelligence agencies, or a coat-tail in the high political or military circles in Damascus and in the Russian intelligence agencies. Such contacts/relations are likely to have a business basis.

Apparently, choosing Nadalina for the transportation of this cargo is connected with the specialization of these shipowners on risky operations, as well as with their strong presence at Tartus and relations with the Syrian authorities. Today, Johar operates the vessels associated with illegal traffic. Thus, his company’s ships regularly violated the EU sanctions regime, calling at the ports of the occupied Crimea: 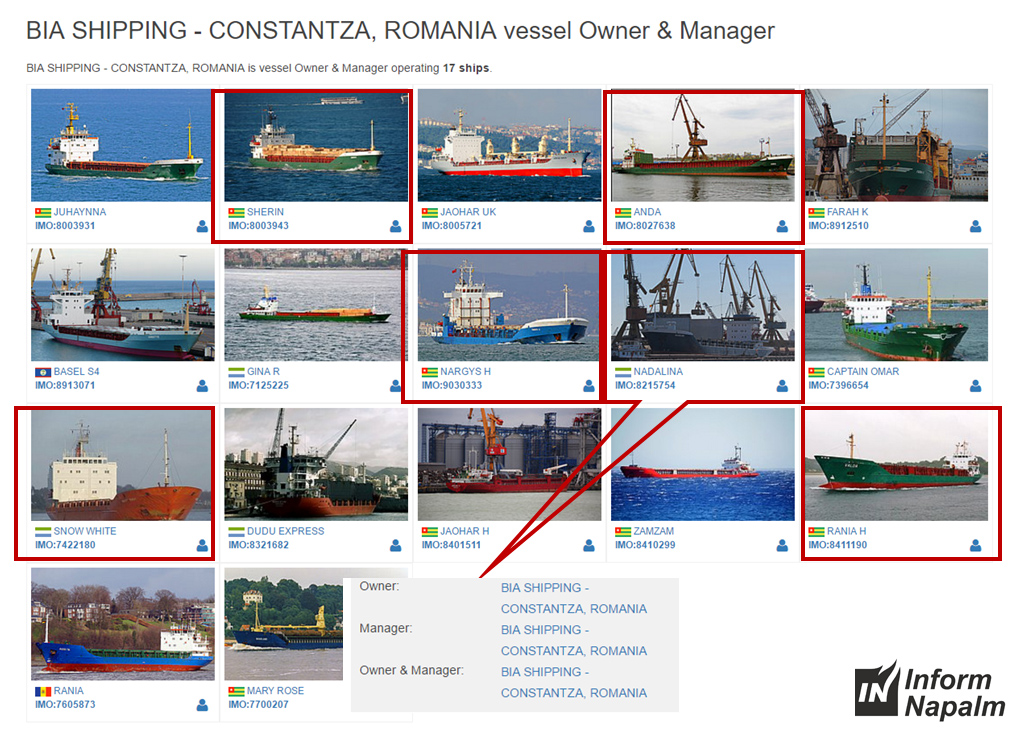 The analysis of the marine traffic for the period of October 20-26, 2016 has revealed the regular character of the traffic by Johar-related fleet in the direction of the occupied Crimea to bypass the EU sanctions regime. 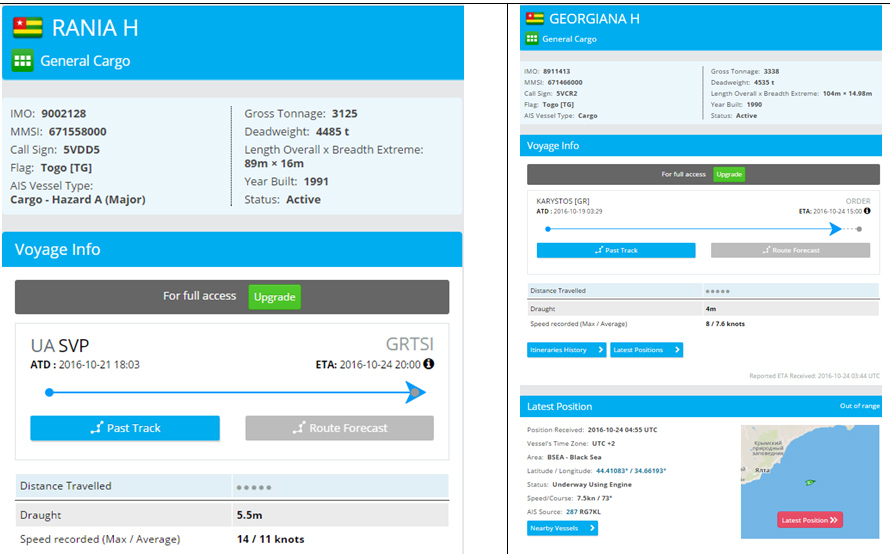 Thus, the routes of Bia Shipping Co Ltd vessels bear evidence of their regular use for cargo transportation to and from the occupied Crimea.

Johar had been directly or indirectly connected to illegal shipping. He had twice sold vessels to operators who then used them for arms smuggling. In 2012 ship Letfallah II was sold to Mohammad Khafaji, the owner of Khafaji Shipping Co. registered in Honduras. Khafaji is the only representative of the business group who actively publishes messages related to deaths of Syrian migrants and shows his utmost sympathy in this regard.

Letfallah II operated by ISM Group Ltd., was intercepted by Lebanese navy with three containers of weapons transported from Libya to Syria on board.

There are grounds to assume that Johar Shipping and Syrian ISM Group Ltd (Abdullah Yahia Building, BP 83, ath-Thawra street, Tartus, Syria) are related companies. Two vessels of the latter, Mega Star and Hiba K (renamed to Rasha D), were involved in arms smuggling allegations in 2013. ISM Group Ltd. also offered registration of ships under the flag of Sierra Leone (the flag of ship Nadalina) in Tartus. The flag of Sierra Leone, along with the flag of Togo, are frequently used by the Johar group vessels.

Conclusions: there is no reliable and direct evidence, that we have witnessed a delivery from Syria of WMD components/ammunition rather than anything else. However, our analysis of the information indicates the following:

This investigation was prepared by Dmytro K, Anatolii Baronin и Kateryna Yaresko for InformNapalmvolunteer intelligence community. An active link to the authors and our project is obligatory for any reprint or further use of the material.

No Responses to “Secret cargo from Syria to Crimea: the saga of Nadalina. Part 2”