Volunteer Reservists of the Russian GRU for Military Conflicts Abroad 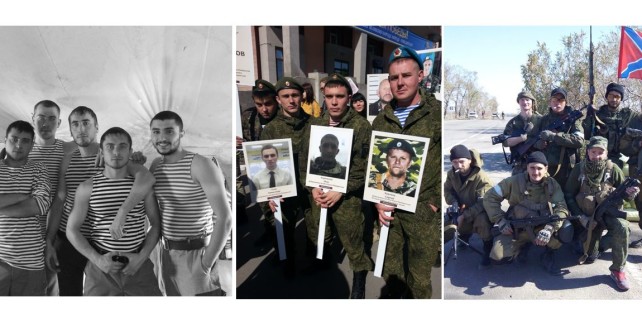 We started working on this article on September 27. Many journalists have already reported on the opening of a ‘memorial plaque’ to a militant killed in Donbas; however, no one bothered to find out how the young people from the Altai (Russia) ended up serving in the illegal armed groups of ‘Novorossiya’.

The team of InformNapalm.org in its OSINT investigations tracks down not only the military forces of the Russian aggressors, but also other auxiliary units involved in the war in Donbas sponsored by the Kremlin.

The topic of the Russian ‘volunteers’ fighting in the East of Ukraine has been covered repeatedly. We know that most of the ‘volunteer militants’ fighting in Donbas get into the conflict area in an organized way and often represent various public organizations (Cossacks, veterans’ associations, military-patriotic clubs and other groups) having legal registration and status in the Russian Federation and providing the main venue to the Russian special services for the recruitment of the ‘cannon fodder’ for Russia’s foreign military operations.

In this article, we would like to draw attention to the Altai branch of the so-called inter-regional voluntary patriotic organization ‘Volunteers’ established in 2014. One of the main activities of the ‘Volunteers’ is the ‘patriotic education of youth’ or, to be precise, the recruitment of the young people to the ranks of militants. Besides, the organization is engaged in comforting the families of the ‘volunteers’ that were killed in Donbas or returned home with injuries, and is in contact with the Russian military medical institutions treating the surviving bandits who returned home safe and sound (or not quite so) from the Ukrainian Donbas. Chairman of the Board of ‘Volunteers’ is Aleksandr Ilyutenko from Novosibirsk, callsign ‘Palestinian‘.

One of the latest events organized by this organization was the opening on September 26, 2015, in the village Ozerki of the Altai Krai of the memorial plaque in ‘honor’ of the local resident Ivan Korolkov (born in 1989, codename ‘Tsar’) killed on January 28, 2015, near ​​Debaltseve (watch a video). The plaque was opened at the initiative of the Barnaul regional organization of the veterans of the Afghan War and other minor wars, Altai Volunteers of ‘Novorossiya’, ‘Solidarity’ trade union named after Stolypin and its chairman Andrey Mayevich. 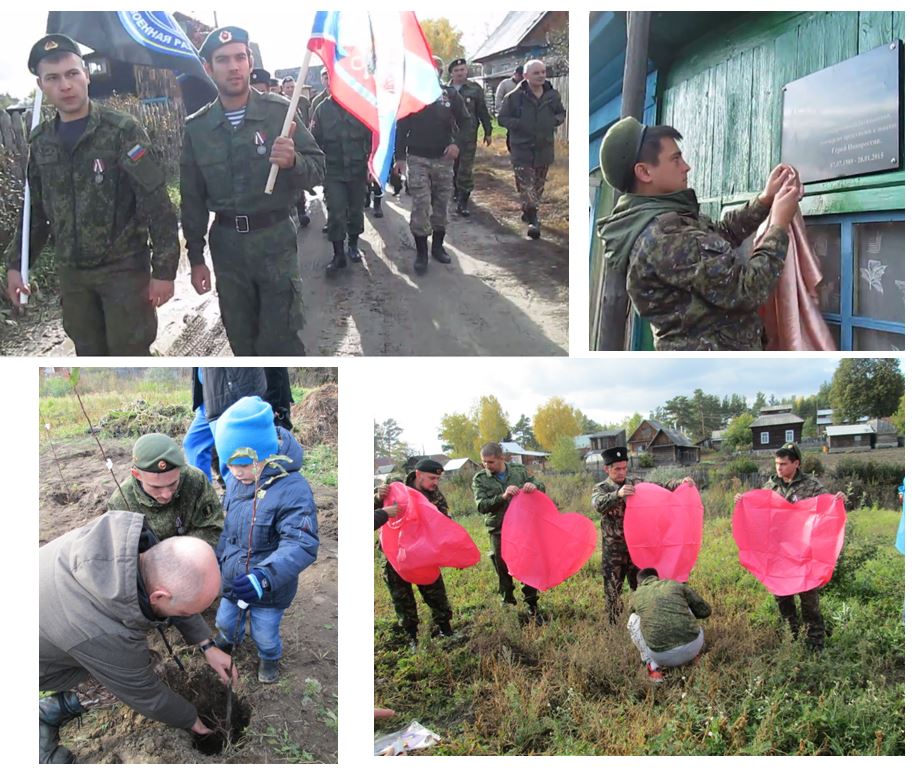 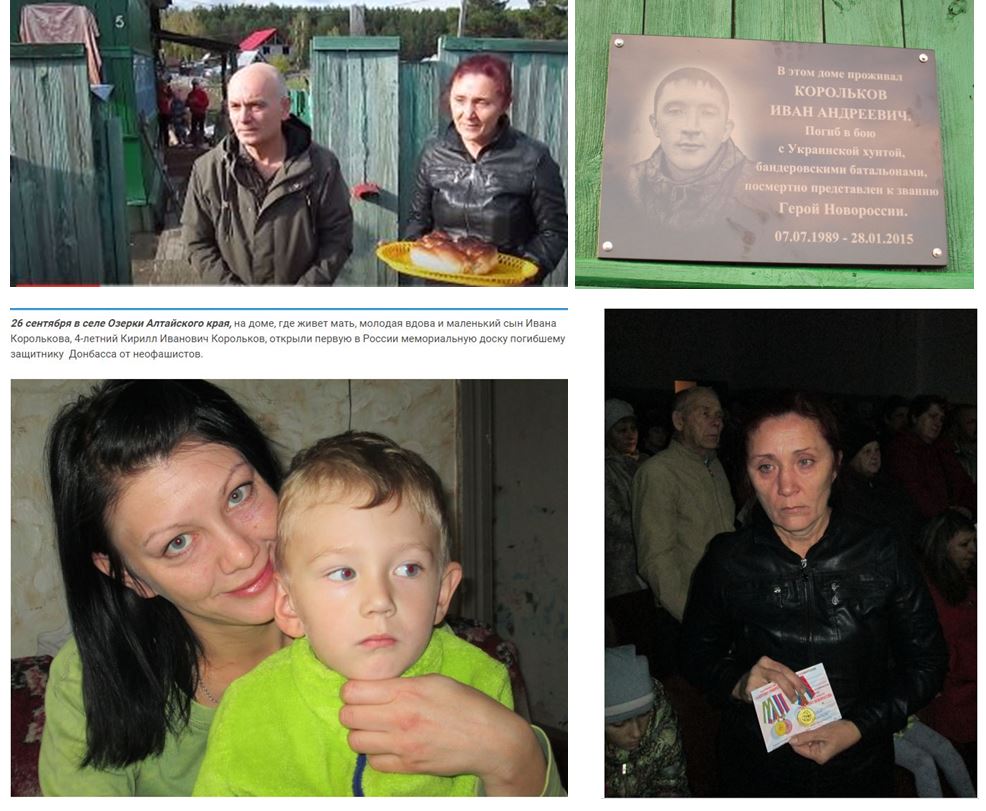 He was not the only ‘volunteer’ from Barnaul sent by Mayevich and his GRU curators to meet his doom in Ukraine – at least 7 more local residents returned home as ‘cargo 200’ (human remains): 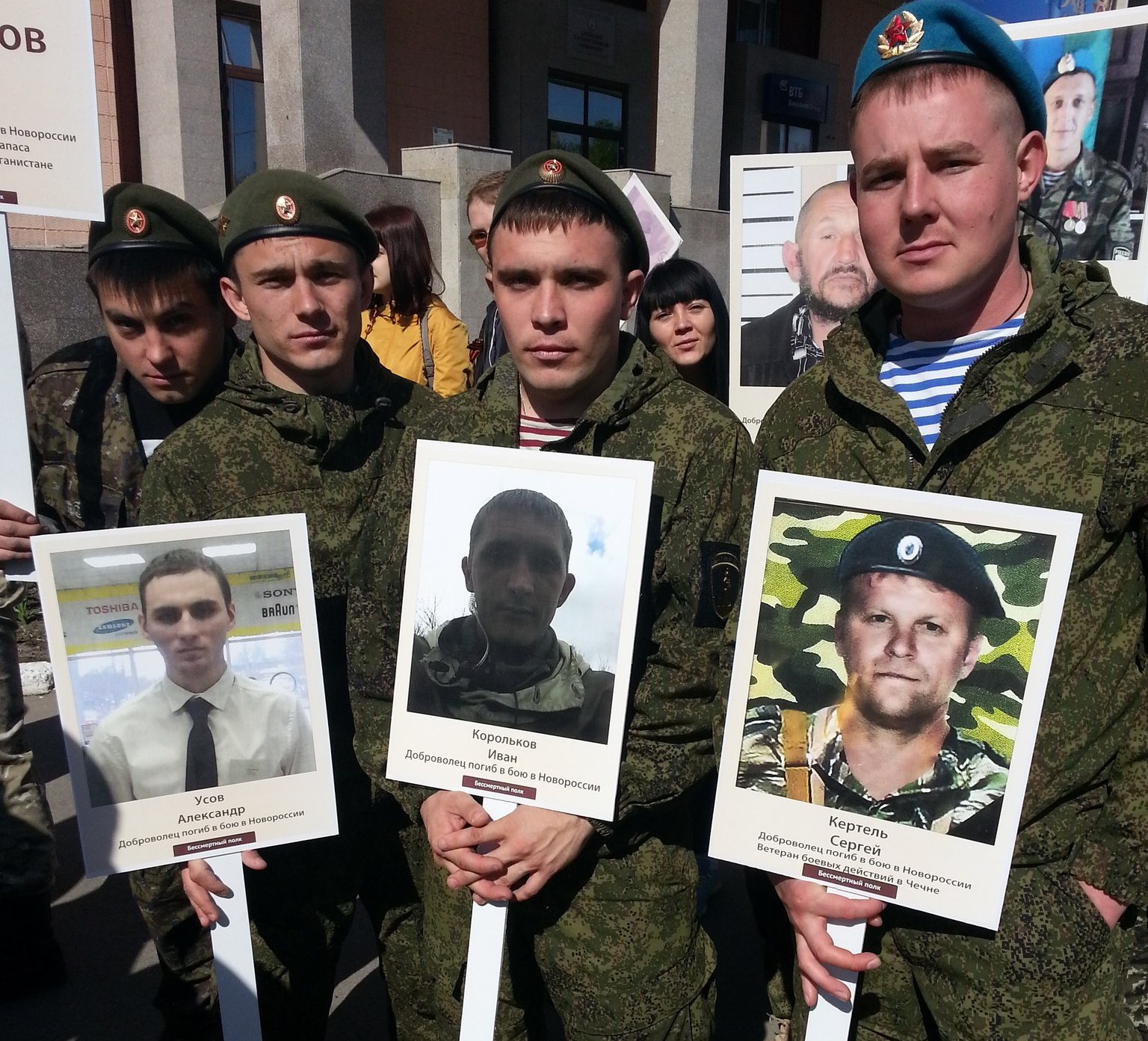 The same Mayevich organized in June in Barnaul the distribution of awards to 35 ‘volunteer militiamen’ from the Altai Krai that fought in the East of Ukraine, who were presented with ‘numbered’ medals ‘For Defender of Novorossiya’. 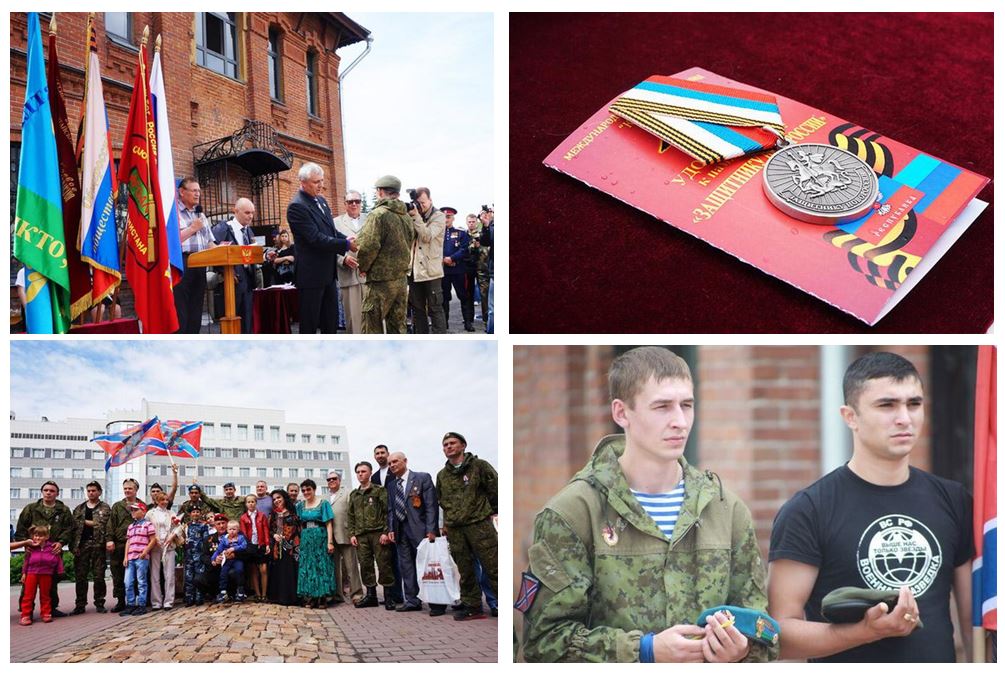 InformNapalm has identified a number of Barnaul ‘volunteers’ and tried to trace down the itinerary that brings them to the illegal armed groups of ‘Novorossiya’.  Specifically, as a result of the study and analysis of the available information, we have identified:

2013–2014, military unit No. 22316, 32nd separate motorized rifle brigade, Shilov, Novosibirsk Oblast (this unit has been repeatedly mentioned in the context of the occupation of Crimea and the war in Donbas).

2014–2015, the 10th Special Force Brigade of GRU, military unit No. 51532, Krasnodar Krai, Goryachiy Klyuch (this Spetsnaz brigade has also been noticed in Ukraine).

Bayramov has a rich military biography, but the albums in his social network profiles have practically no pictures reflecting the period of his military service at the bootcamp and in the 32th brigade, except for one photo with colleagues made in August 2014, where they are showing off their brand-new medals ‘For the Recovery of Crimea’ in ok.ru social network. 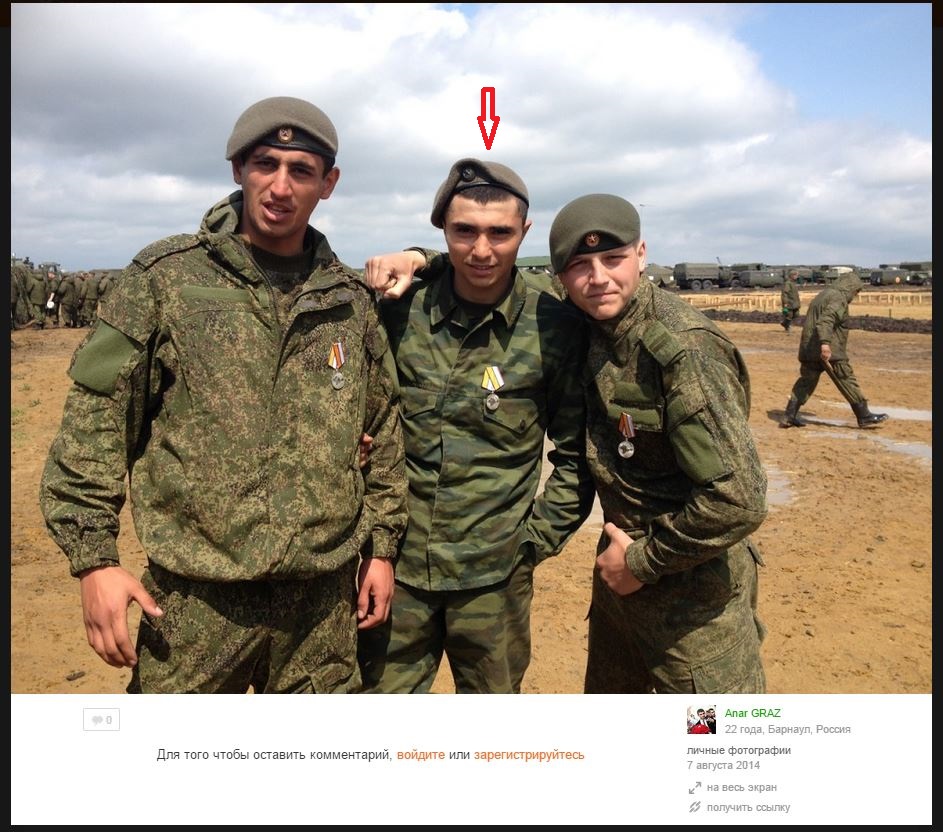 It seems that Bayramov is not being quite frank about his military service at the 10th brigade of GRU Spetsnaz, but his profile on ok.ru has, among other pictures made in October 2014, a few interesting photos showing some young men wearing ‘Gorka’ uniform and striped vests usually worn by the Russian paratroopers and Spetsnaz, posing in a tent with Ainar (marked with a red arrow).

Note: It should be noted that photos from the same series can be found in the social profile of another ‘volunteer’ from Altai, Kirill Geist (marked with a blue arrow). This picture explains a lot, including the above record of Bayramov’s service at the 10th brigade of Spetsnaz. The analysis of this photograph can be found below. 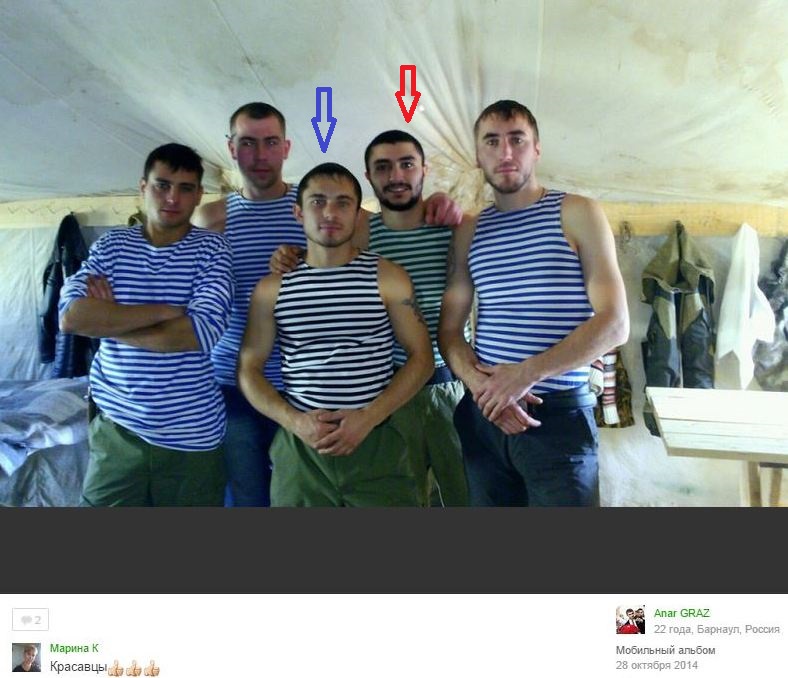 Among the photos with Bayramov, several pictures showing his comrades-in-arms from Donbas were made in Altai, as well as at the award ceremony of the above-mentioned medal ‘The Defender of Novorossiya’. 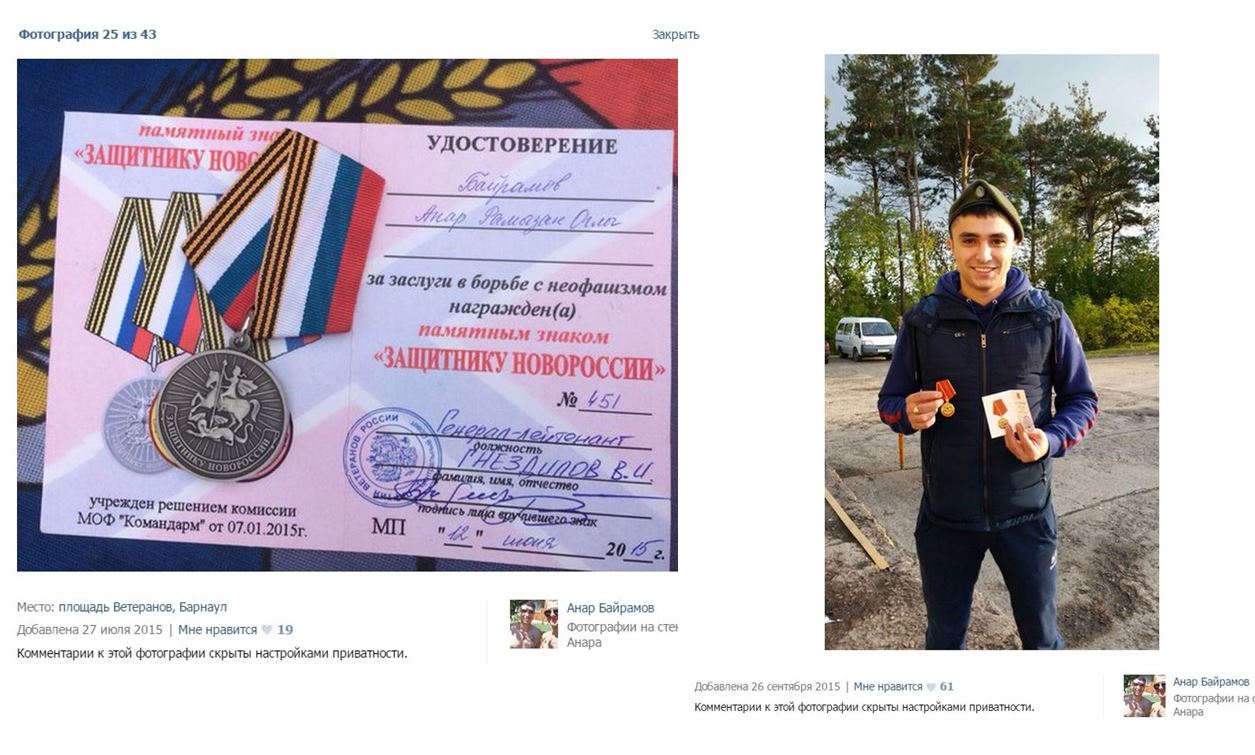 2. Kirill Geist (archive with photos, archive with pictures) – born on 01.10.1990 in Zarinsk in the Altai Krai, resident of Barnaul. Posts and photos related to his military service are missing from Geist’s profile (presumably, hidden intentionally), with one exception: a photo uploaded on October 30, 2014 featuring Geist (marked with a blue arrow) in the company of several young people wearing vests, including the above-mentioned Bayramov (marked with a red arrow). Other tags related to this picture are noteworthy as  well, like the comment by the ‘mentor’ from the Altai branch of ‘Volunteers’ NGO Andrey Mayevich: ‘I don’t see Diman?? He must have been cooking pilaf then!’ and, of course, the geotag ‘Goryachiy Klyuch’.

Note: it should be remembered that the 10th separate special operations brigade of the Main Intelligence Directorate (GRU) of the General Staff of the Russian Armed Forces is stationed near the settlements of Goryachiy Klyuch and Molkino in Rostov Oblast. Several field camps, training ranges and shooting grounds are also deployed there. For instance, a training camp used by the Russian military command to prepare ‘volunteers’ to be sent to Donbas is located near the settlement of Psekups (see earlier publications on informnapalm.org): 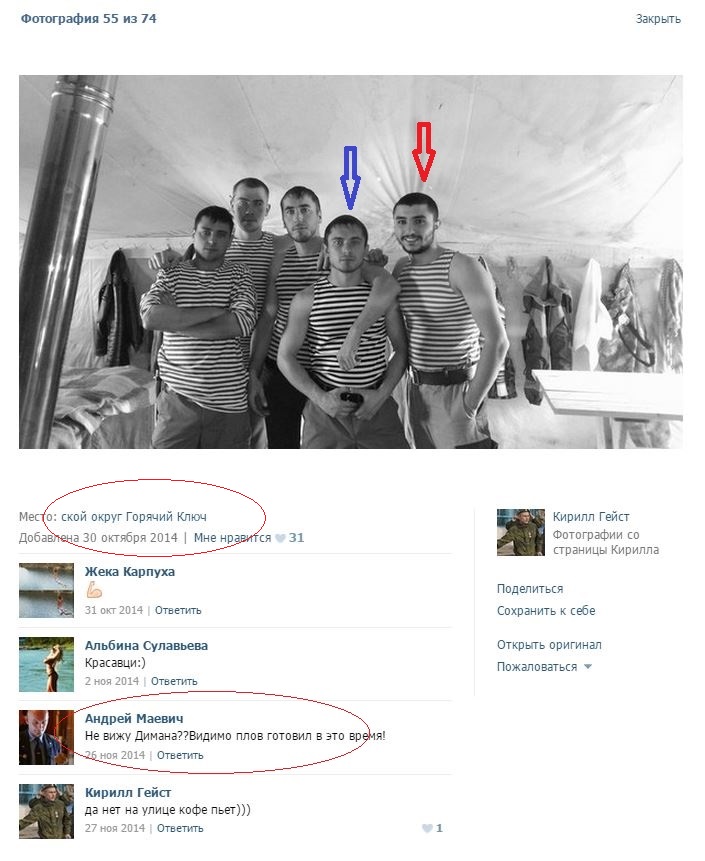 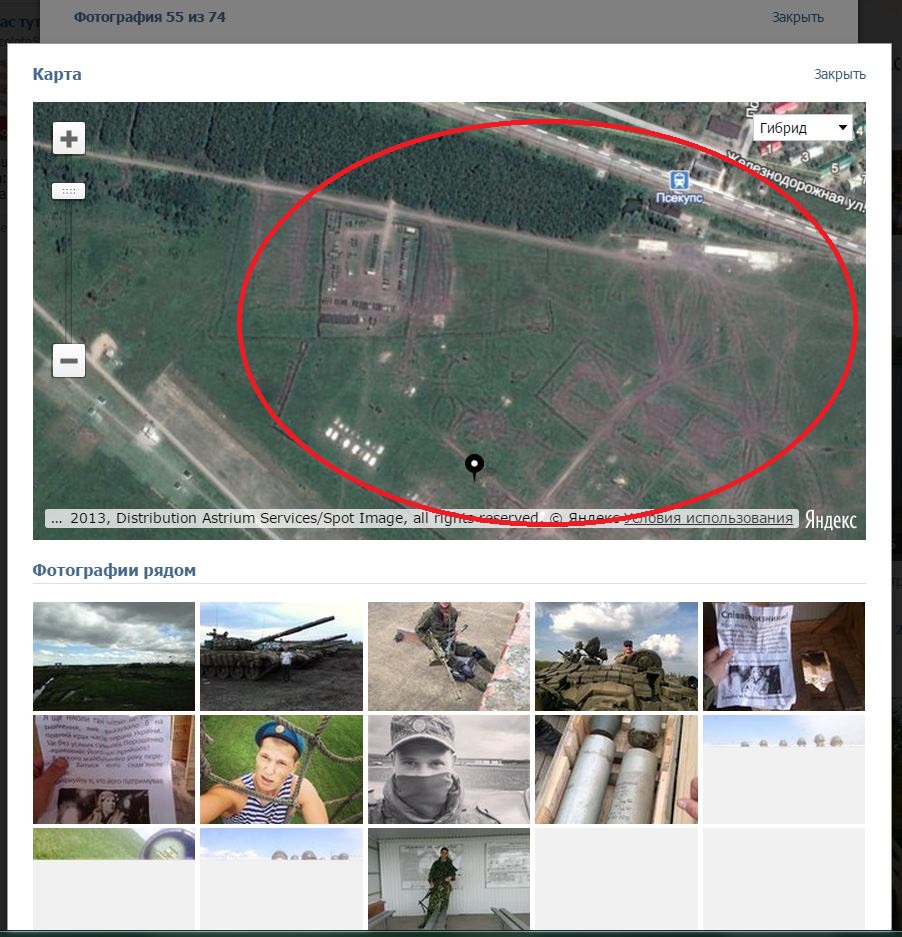 Other photos posted by Geist include a number of pictures made in the Altai and showing his joint activities with the ‘comrades-in-arms’ from Donbas mentioned above, including Bayramov, as well as Ivan Pakhomov (marked with a green arrow) and David Basilashvili (marked with a yellow arrow ) analyzed below, and their mentor from ‘Volunteers’ NGO Andrey Mayevich (marked with a black arrow). 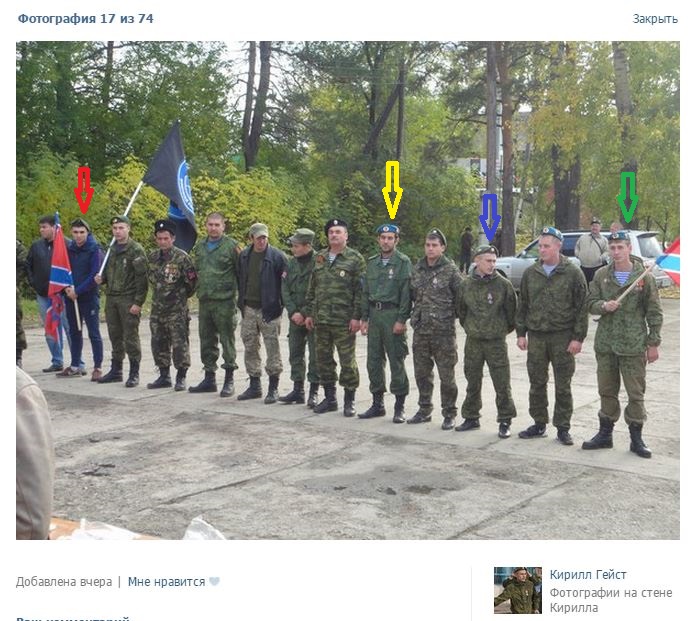 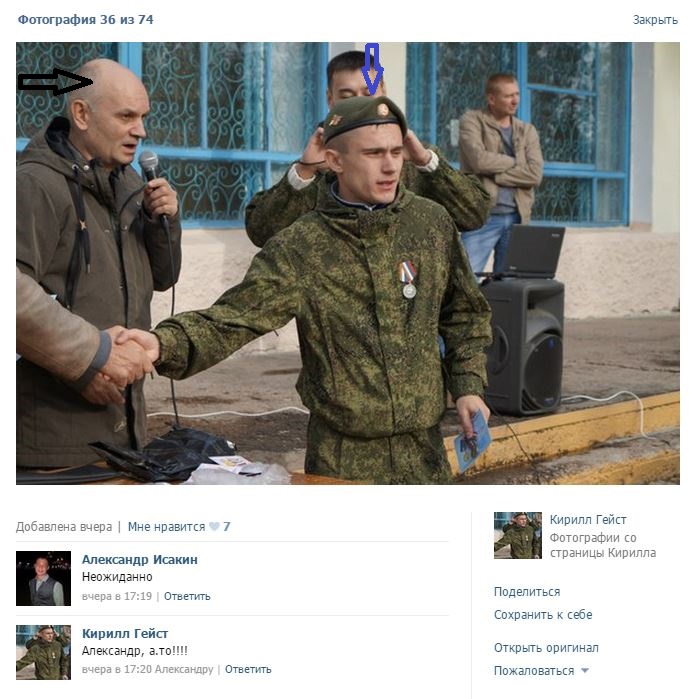 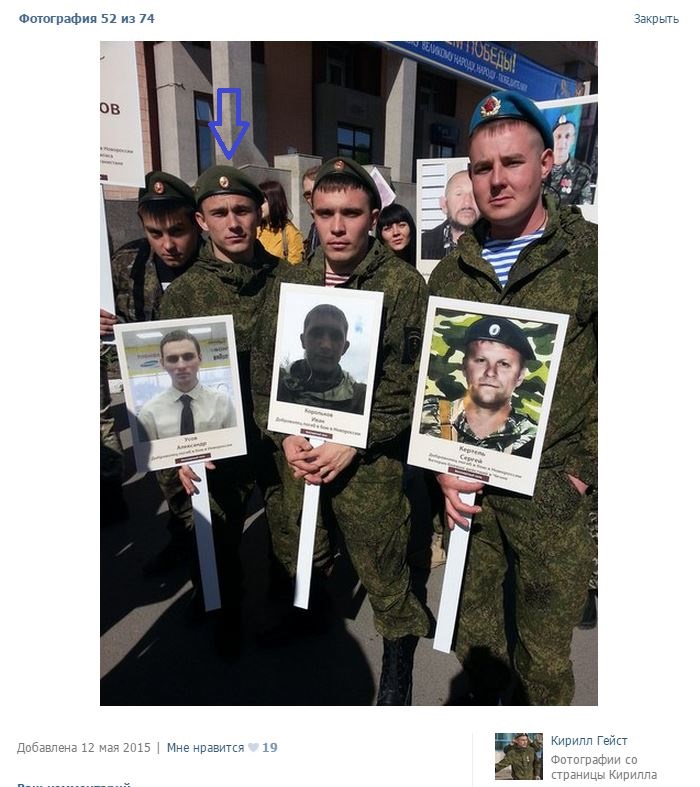 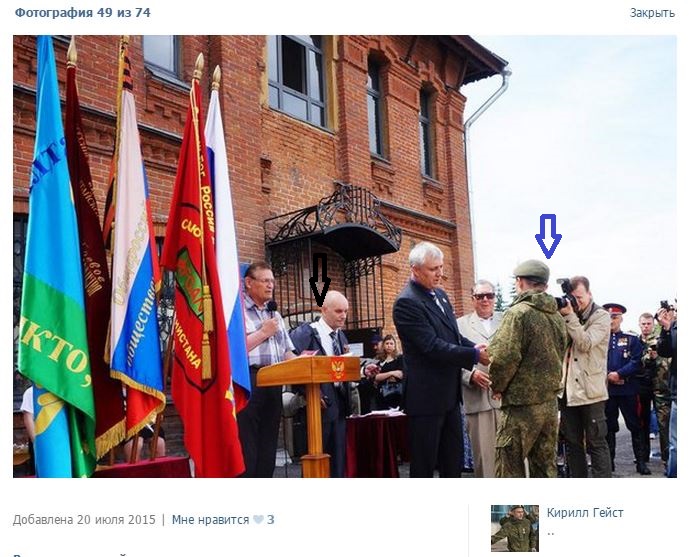 3. Ivan Pakhomov (archive with photos, archive with contacts) – born on 16.11.1990, resident of Barnaul. There are no many posts and pictures related to his military service in Pakhomov’s profile (presumably, in 2013–2014 he served in airborne troops), but unlike his ‘comrades-in-arms’ from Donbas, Ivan dared to upload pictures taken in the area of combat operations in the Eastern Ukraine, some of which can be found in his page on ok.ru social network. These include a picture of Pakhomov next to the Russian propagandist from ‘Rossiya’ TV channel, the author of TV reports of the ‘Special Correspondent’ series, Aleksandr Buzaladze (marked with a pink square) uploaded in April 2015. Pakhomov has been identified by the Myrotvorets [Peacemaker] Center back in November 2014 and entered into the Purgatory database of terrorists.

Note: In April 2015, ‘Rossiya’ TV channel released a propaganda film by A. Buzaladze named The Pincers on the situation near Novoazovsk and Shyrokyne. Judging from Pakhomov’s photos, upload dates, comments and geotags, he was near Shyrokyne from October 2014 till May 2015. 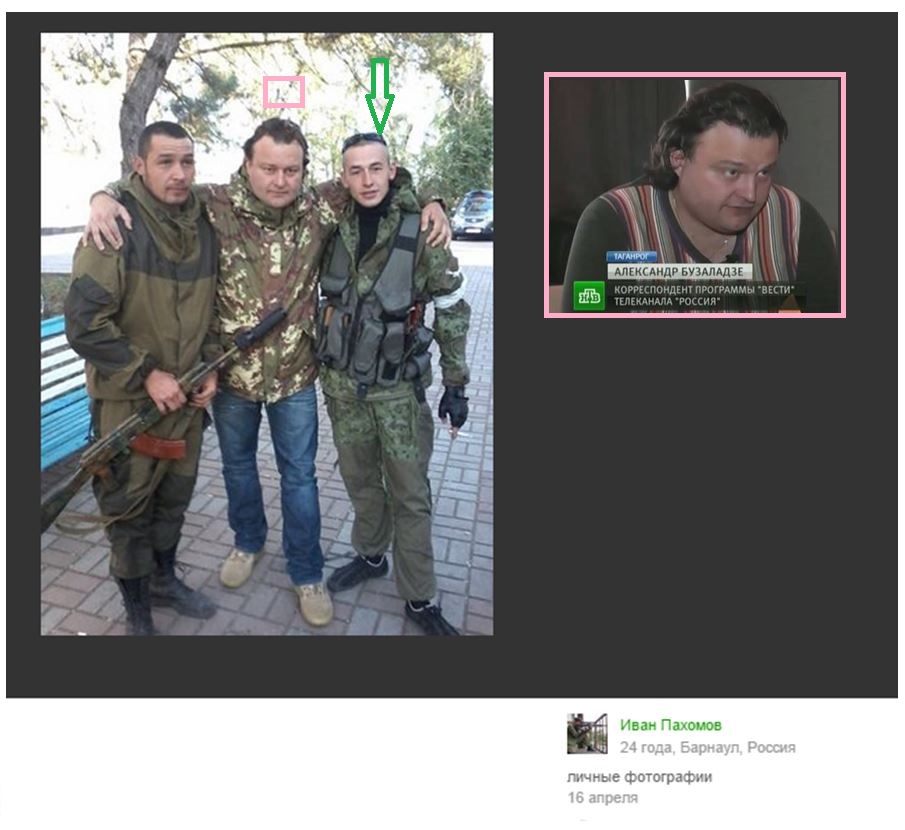 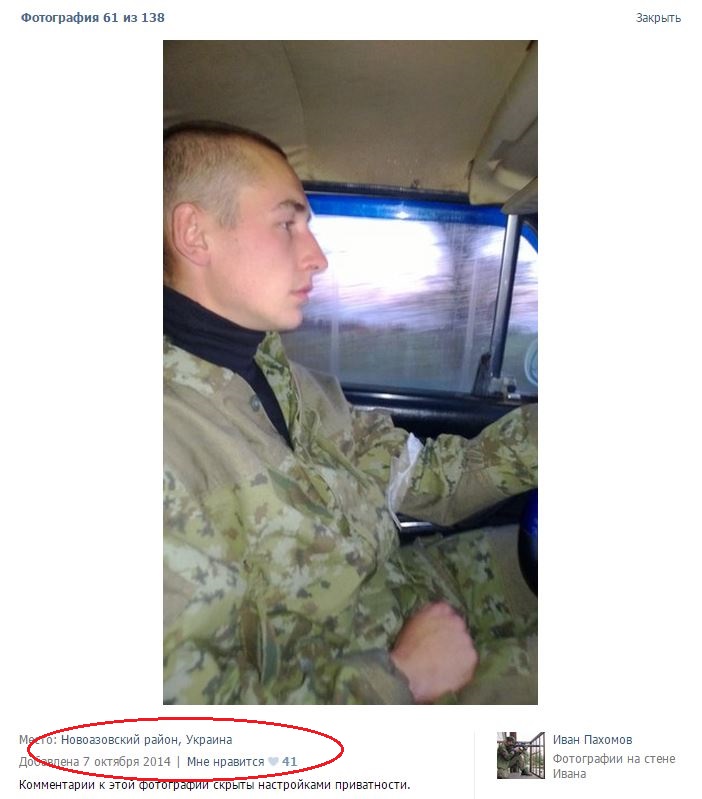 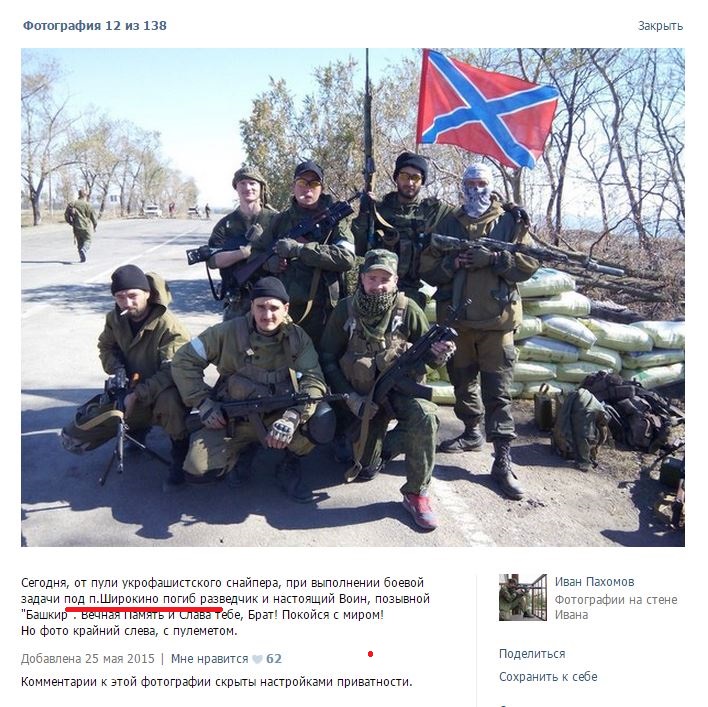 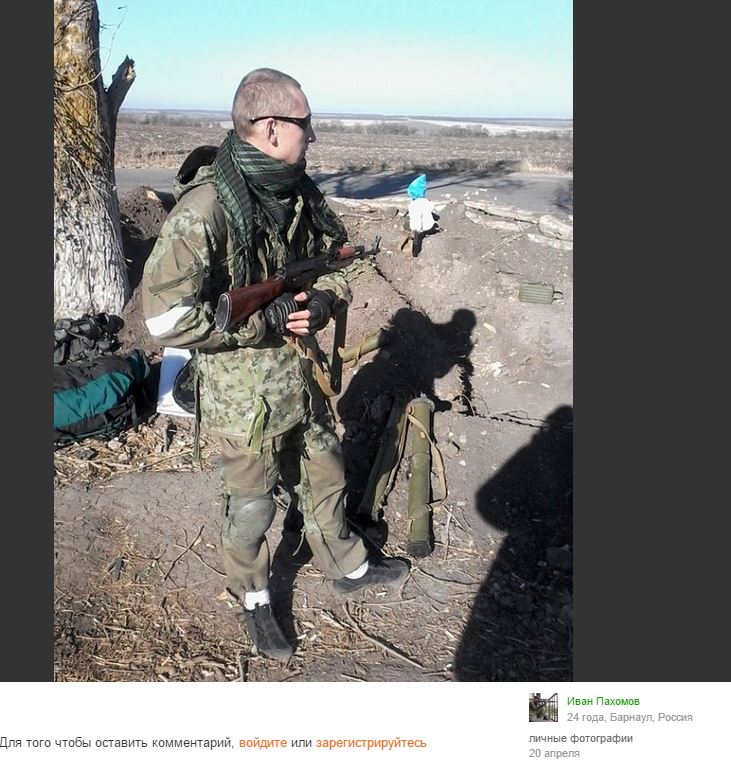 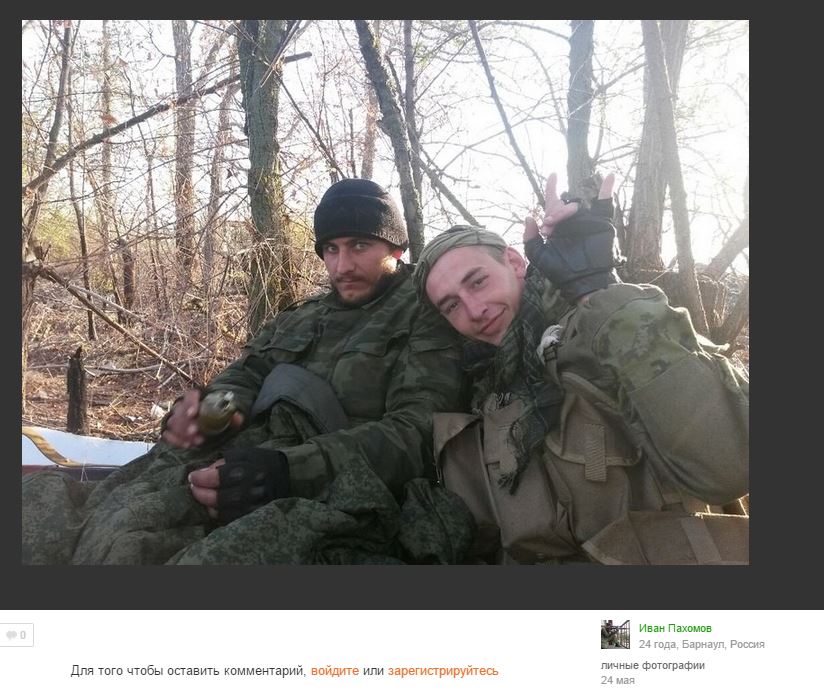 As we said above, Pakhomov’s pictures include a number of photos made in the Altai featuring his ‘comrades-in-arms’ from Donbas, including photographs of the persons investigated in this article: Basilashvili and Bayramov.

Pictures from the ‘Summer Camp 2015’ apparently held in the Altai are also noteworthy. They feature the ‘volunteers’ trained at the shooting range by the Russian career officers and Pakhomov posing with the latest SVD-S sniper rifle. 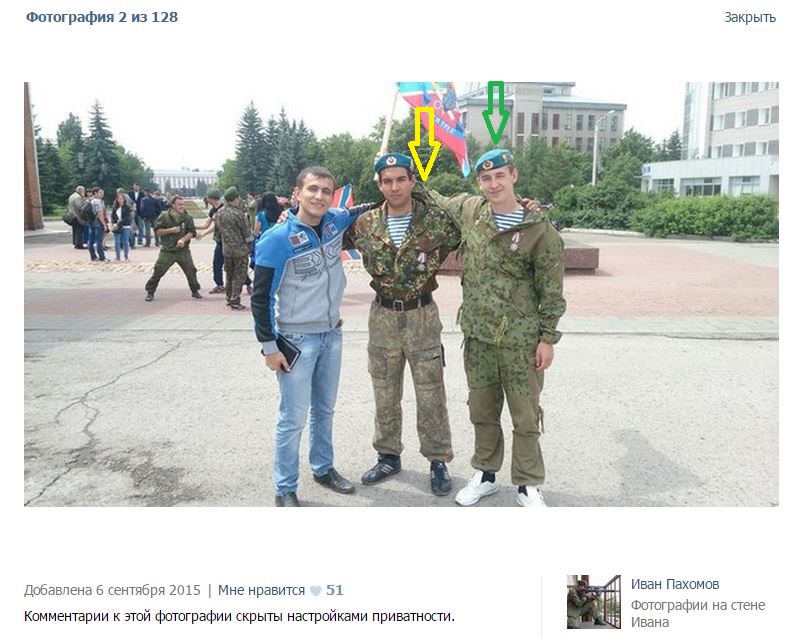 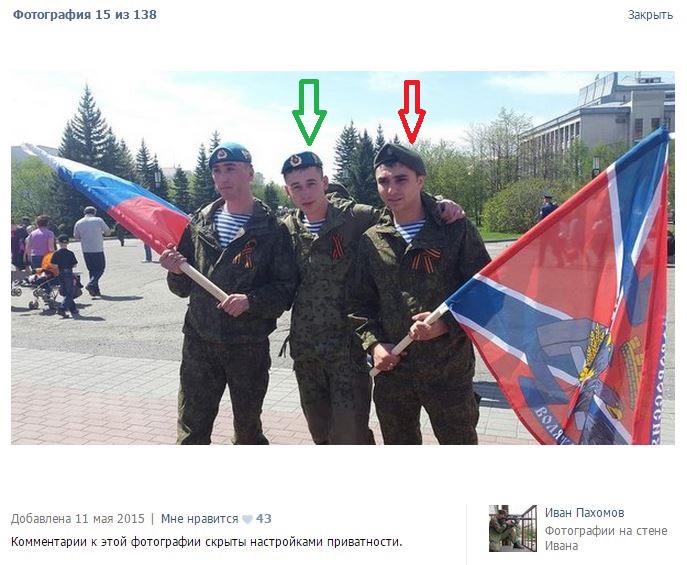 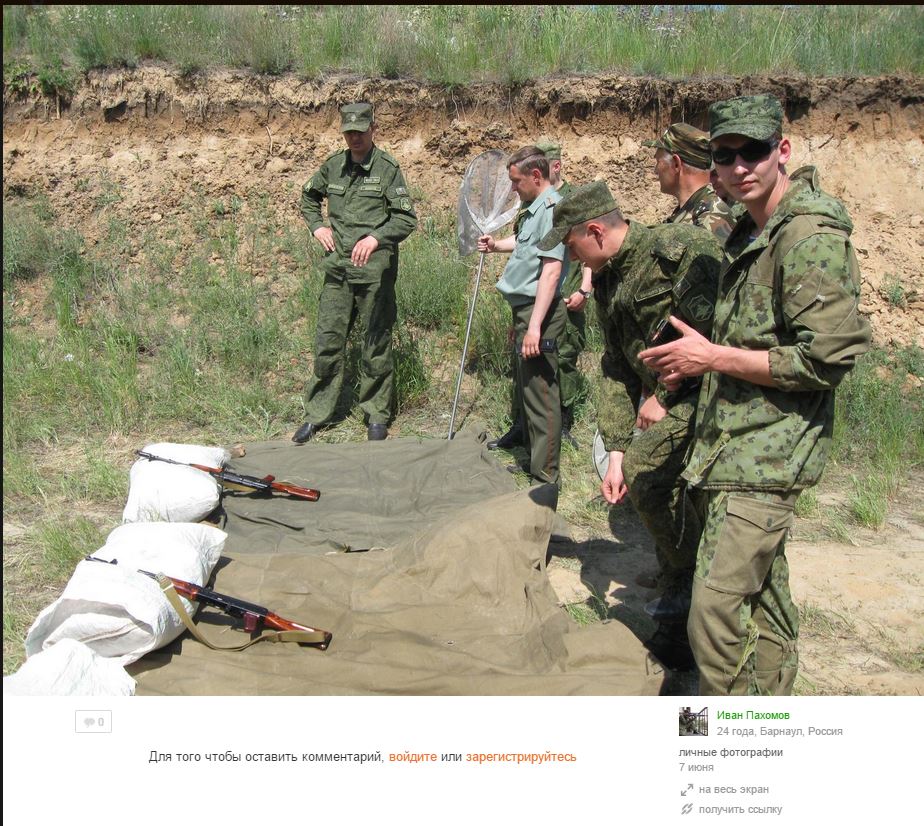 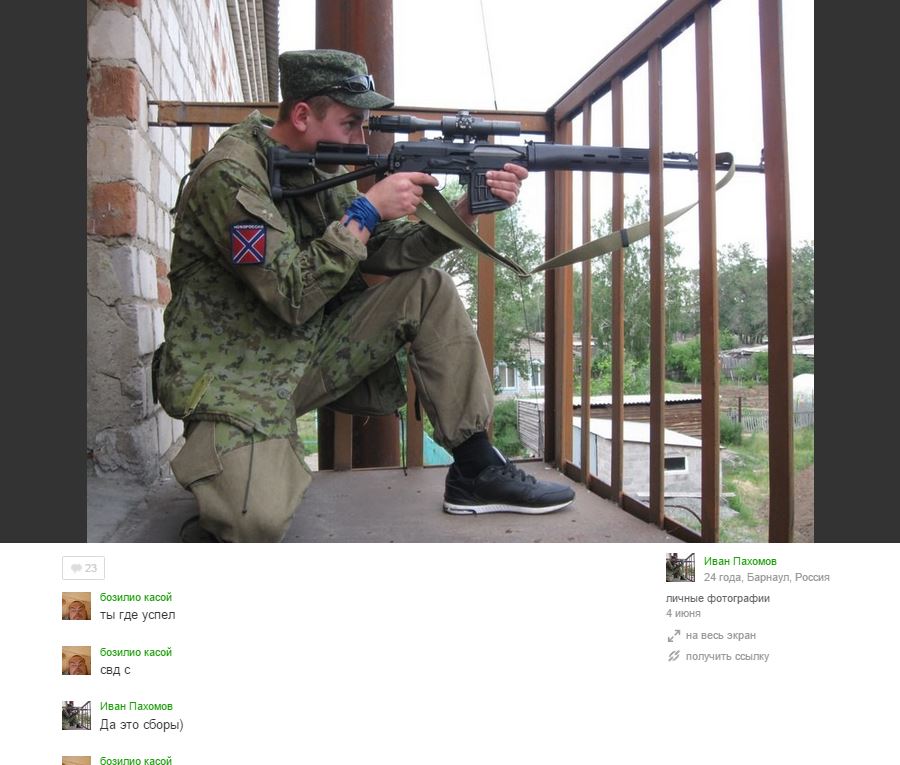 4. Davit Basilashvili (archive with photos, archive with contacts) – born on 19.02.1993, resident of Barnaul. A ballet dancer and a loser, Basilashvili is a frustrated ‘Tsiskaridze’ (he studied at the Altai State College of Culture) turned militant. In contrast to his ‘comrades-in-arms’, the information and photos posted by him are meager, but quite enough; he can also be found in various videos and photographs posted by his colleagues. Moreover, Basilashvili, based on the initial information provided by InformNapalm back in March 2015, was identified by the Myrotvorets Center and got into the Purgatory database of terrorists. 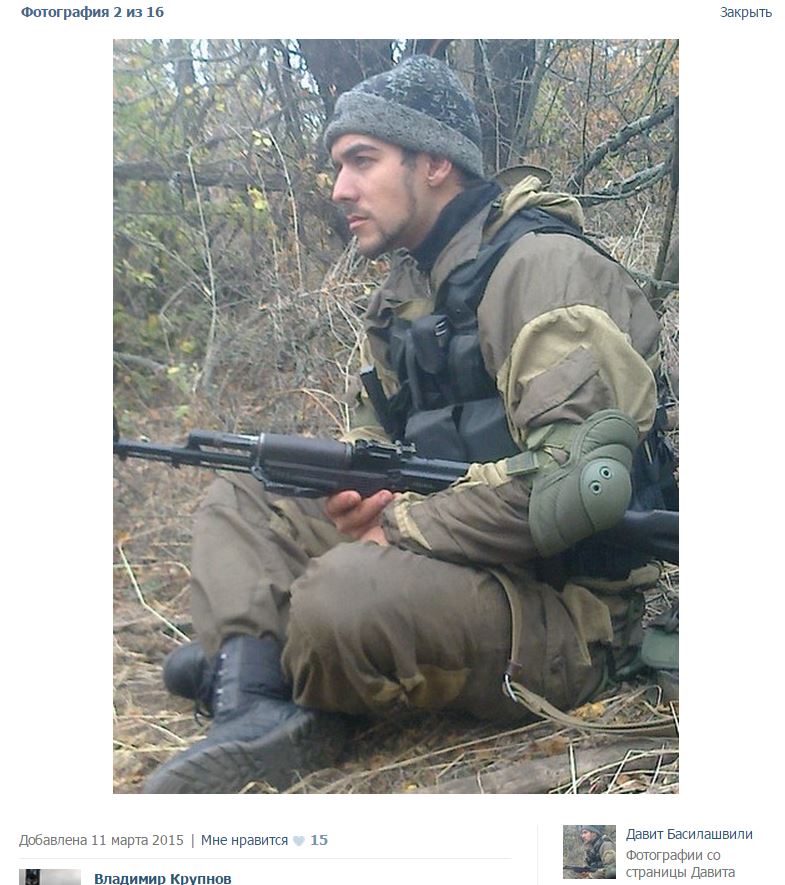 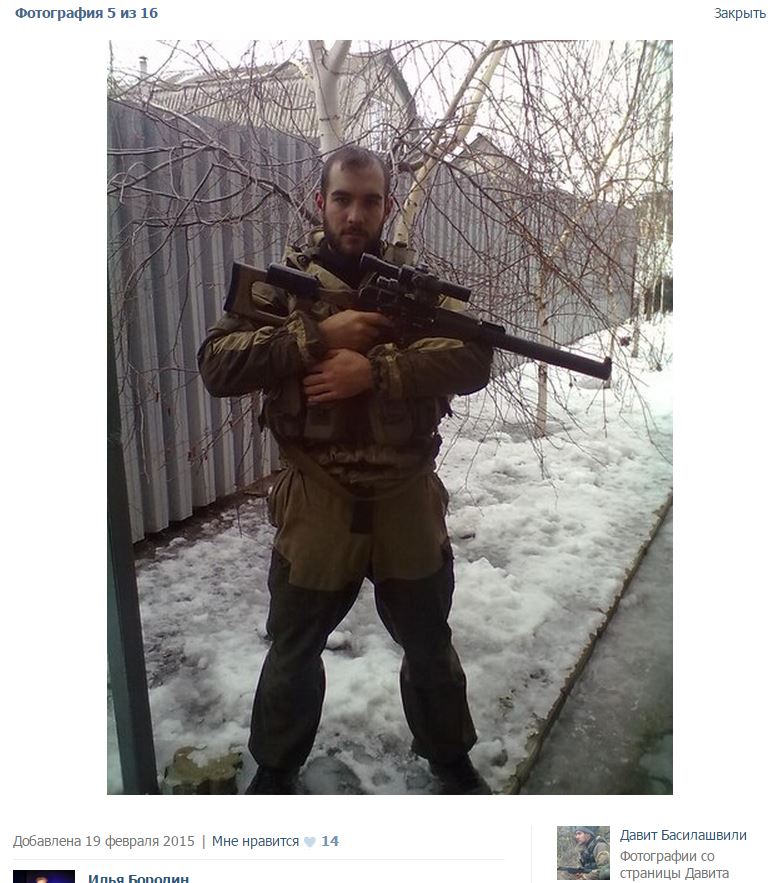 All of the above characters have something in common. They are all the ‘volunteer reserve’ of the Russian secret services and share a number of common features: all of them recently served in the Armed Forces of the Russian Federation and have the corresponding military skills and experience; all of them are members of the Barnaul branch of ‘Volunteers’ NGO, from where they were recruited to the ranks of the militants; all of them underwent training prior to their trip to Donbas at the base of the 10th brigade of the GRU special forces; and they were all in the combat zone in the East of Ukraine at about the same time.