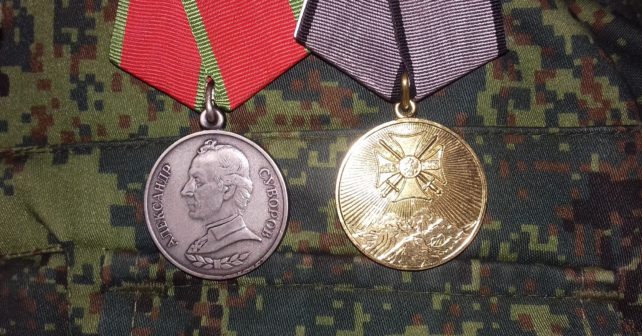 OSINT research by our investigators into state and institutional military awards of the Russian Federation, given to Russian soldiers for participating in Kremlin regime’s secret wars in Ukraine and Syria, has been used as a basis for many publications of international volunteer community InformNapalm. So far we identified over 50 awardees. In most cases, we provide not only the names, but also copies of award certificates with the numbers and dates of the decrees (orders), and build reasonable assumptions about the merits for these medals.

According to our statistics, many awardees serve in the infamous 291st Artillery Brigade (military unit #64670, Ingushetia, village Troitskaya, a part of the 58th Field Army of Southern Military District of the Russian Armed Forces), a noted participant in the undeclared war against Ukraine, as well as in ground operations in Syria. 291st Artillery Brigade of the Russian Armed Forces is Back on the Donbas Radar for a Record 12th Time, InformNapalm presented in June of 2016.

We should note that at the end of December 2015 our community’s analysts identified a group of soldiers of the 291st Artillery Brigade, who were “paying their international duty” in Syrian Arab Republic, see East Is a Delicate Matter: 29 Servicemen from 291st Artillery Brigade in Syria (some “heroes” of the publication were also spotted in “Ukrainian business trips”). However, after the publication the tracks of most of them simply disappeared – social profiles of the Russian soldiers were removed by Russian censors, and the ones that did remain lost the photographic evidence related to the trip to the Middle East, because, according to Moscow’s assurances, “there are none of them there.”.

However, Russians’ memory is short, as usual. Three months later, three of the subjects of this investigation bragged in social networks about award documents and the medals for the Syrian mission, Presidential Decree of 8 December 2015 – see Syrian Dividends of Russian Army 291st Artillery Brigade Soldiers. And again, after our publication and the intervention of Russian censorship the photos of the awards of dashing representatives from the Russian Army vanished. Apparently, after the record twelfth leak the command of the 291st Artillery Brigade received a serious ass-kicking not only from the district headquarters, but directly from Moscow. Educational and preventive work plus strict instructions were given to the soldiers: don’t advertise themselves in social networks! But these measures clearly were not sufficient – now the unit’s political instructors and security officers will have to educate even the servicemen’ parents. 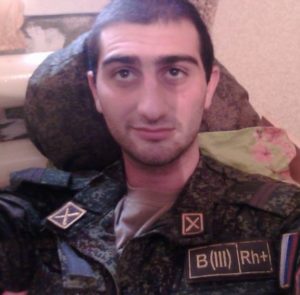 Our experts discovered a soldier of the 291st Artillery Brigade Albert Arzumanyan-Davydov, born January 28, 1999 (archive of the profile, albums, contacts). At the first glance, it is an unremarkable profile of a junior sergeant of the military unit #64670 without a hint of Ukrainian or Syrian “business trips”. Only the shot with two medals with no award documents or comments, uploaded to the album Saved Photos on July 25, 2016 is suspicious: here we can see a Medal of Suvorov and a medal For Service in the North Caucasus. Also the profile contains a photo with a comrade-in-arms and fellow countryman Darzyan, subject #2, one of the 29 soldiers of the 291st Artillery Brigade sent to Syria. 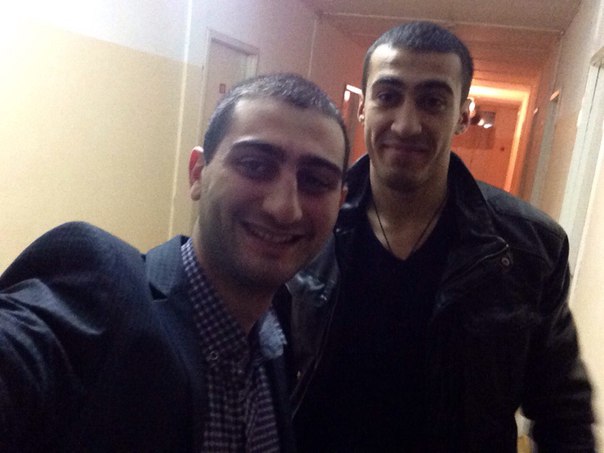 Taking into account that many braggers are boasting about somebody else’s awards, it is not guaranteed that the owner of the page is the owner of the awards. But some interesting details came to the light after a closer look at Albert’s profile. Among his contacts we identified Armen Davydov (profile 1, 2) – his father. His pages in social networks VKontakte and Odnoklassniki are decorated with the award certificate for the medal of Suvorov #44112, issued in the name of Albert Armenovich Davydov, by Presidential decree of 15 March 2016. 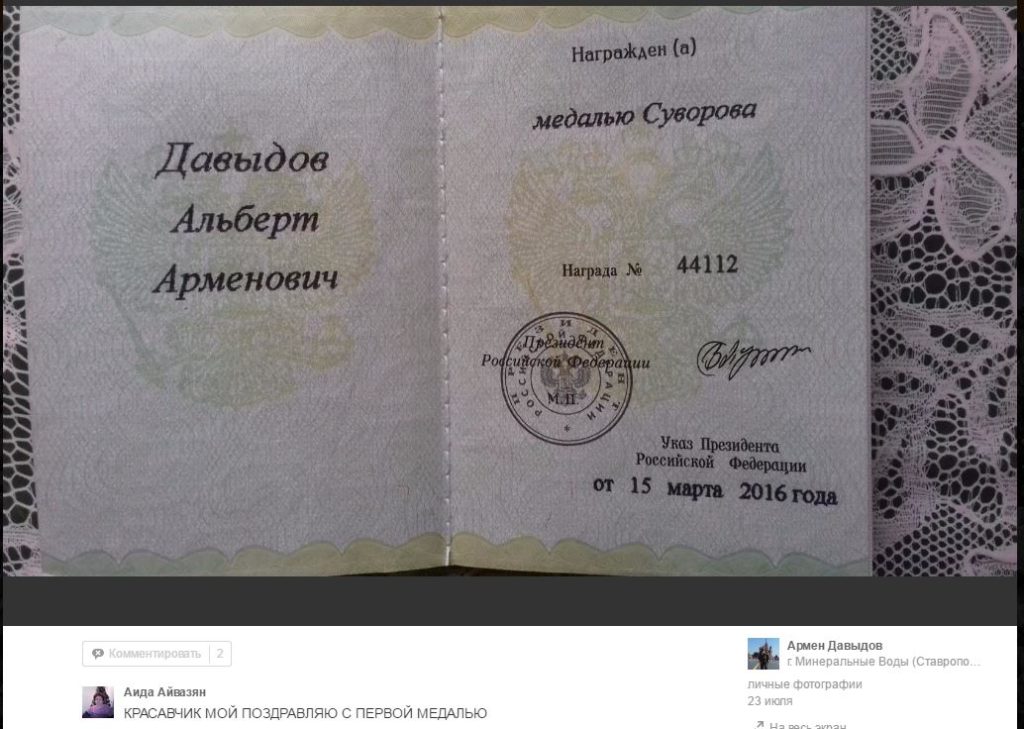 “Dear daddy” didn’t just expose his son’s award, he also set him up with a series of pictures uploaded in December 2015. In these photos Albert poses before heading to the Syrian mission in the summer sand-colored uniform, which Russian military uses in Syria. 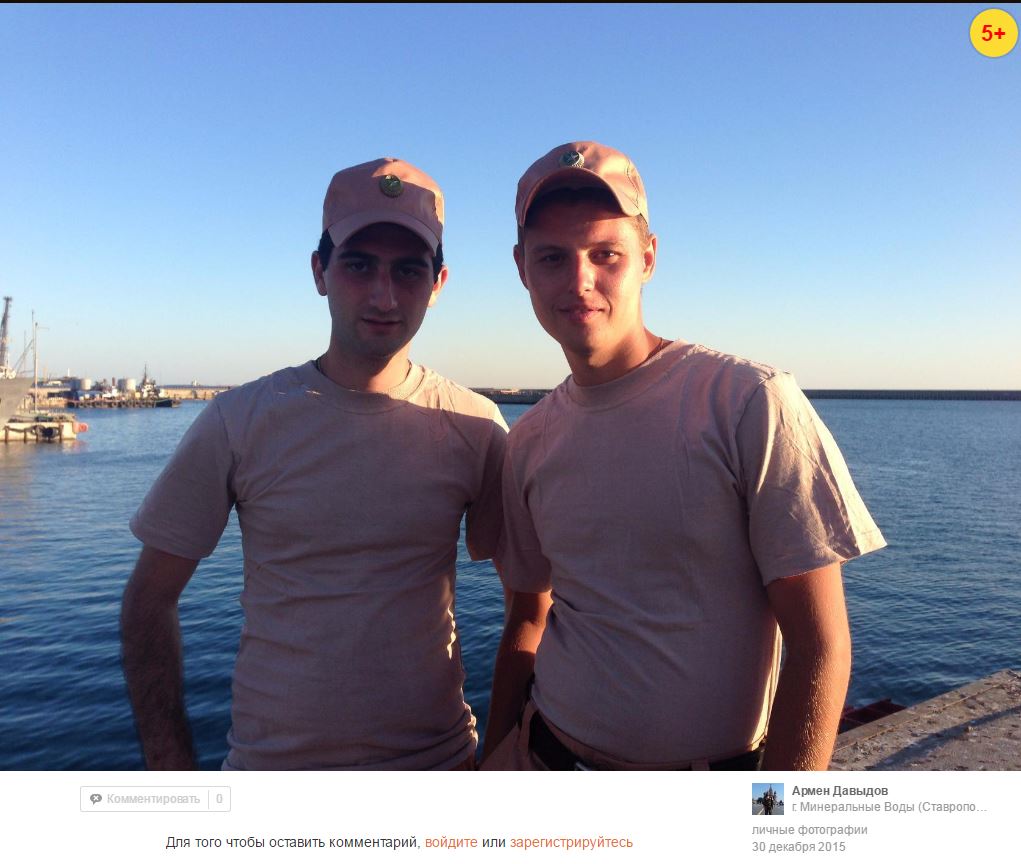 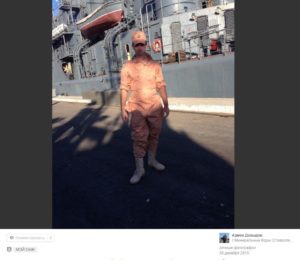 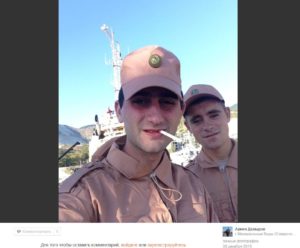 The assumption that it is the departure, not the arrival, is confirmed by a number of clues. First, the uniform is brand new. Second, Albert Davydov was not among the 29 gunners identified in December 2015. Third is the date of the award. The first crew of 291st Artillery Brigade was in Syria between September and November or beginning of December of 2015, which is indirectly confirmed by a single decree on awarding them of 8 December 2015. Accordingly, the Syrian trip of Davydov Jr. began in late 2015 and ended in early March 2016. We can conclude that from the date of the decree for his award, March 2016, as well as a series of pictures from Albert’s father’s album, where Davydov Jr. was posing against typical Syrian landscape with unknown (yet) servicemen of the Russian Army. 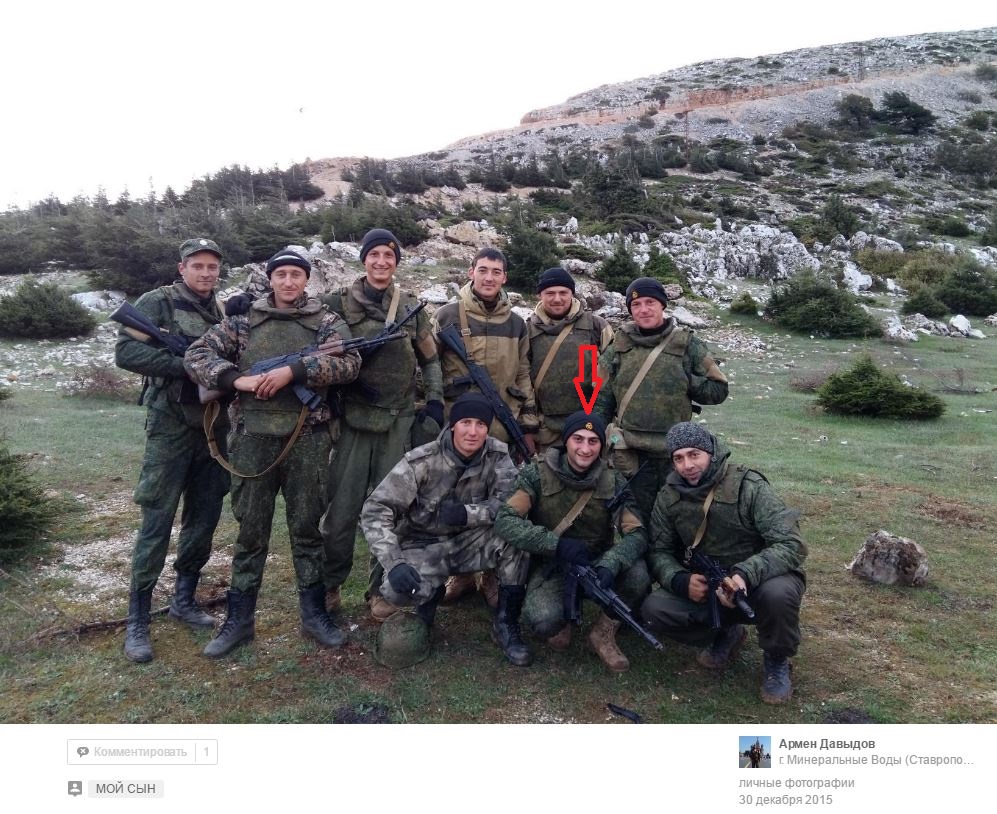 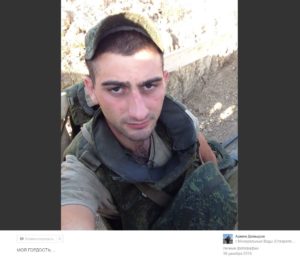 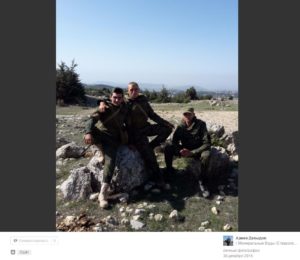 Not only the son Albert, but also his father Armen sparks the interest. He lives in the city of Mineralnye Vody, Stavropol Kray – a teacher of additional education (basic military training in the school – AG), a retired major of Internal Troops, a participant of Putin’s punitive operations in the North Caucasus, which cost tens of thousands of Chechen, Ingush and Dagestani lives. 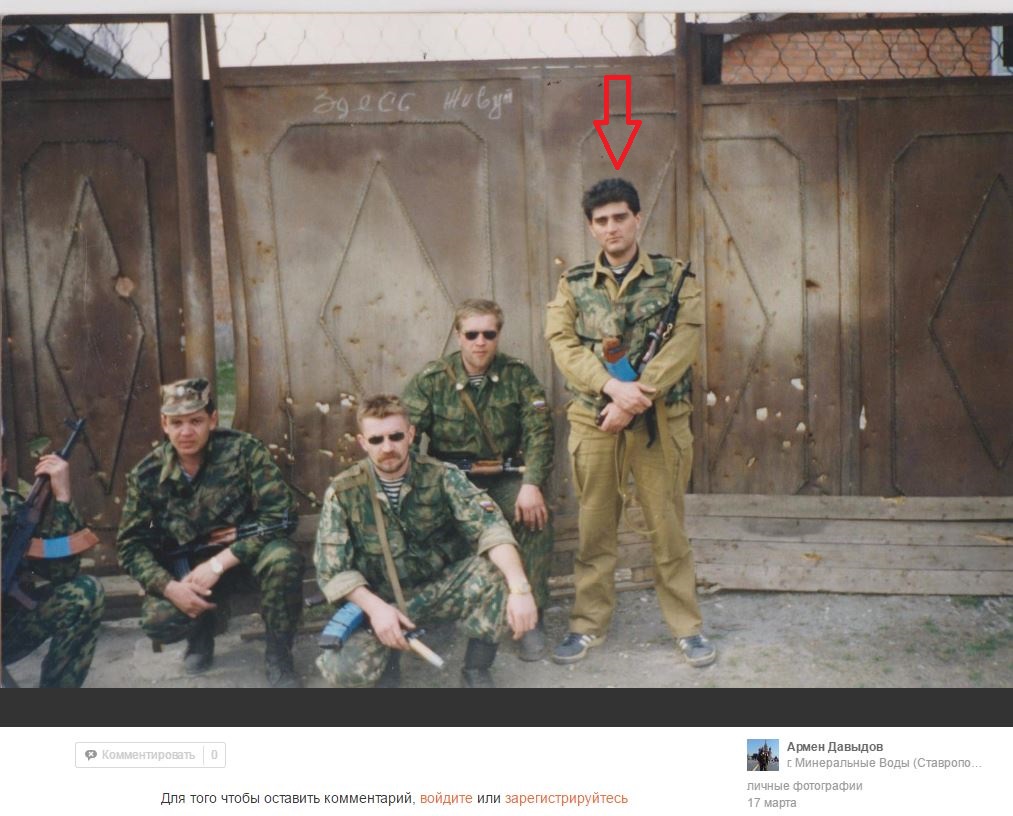 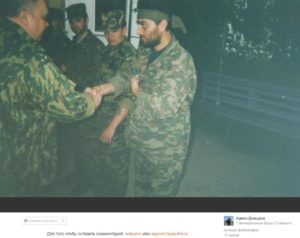 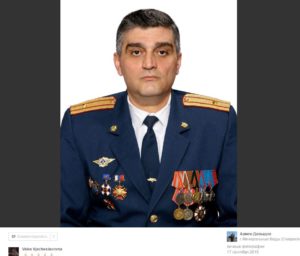 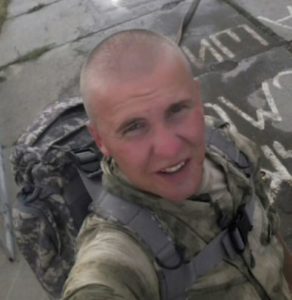 Davydov is not the only soldier of the 291st Brigade, who received a state award from the Supreme Commander in March 2016. We also found Nikolai Mikhailovich Savchuk (profile, album, contacts) from the village Kargasok of Tomsk Oblast, who on June 3 boasted about the Medal of Zhukov #1839, awarded by Putin’s decree of 16 March 2016. He also most likely received it after a Syrian mission. 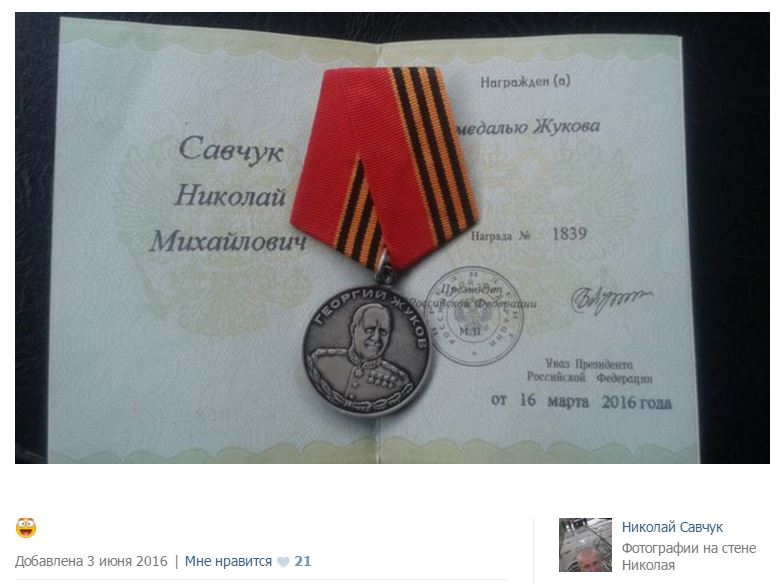 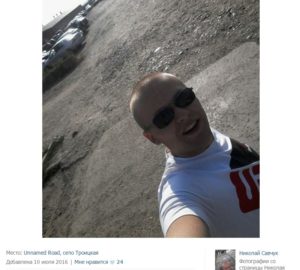 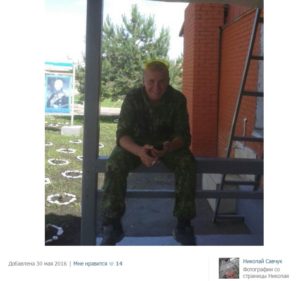 Note that Davydovs are not the first dynasty of Russian war criminals identified by the volunteers of InformNapalm. At the end of July 2016 we presented father and son Shtondenko, see The Dynasty of Russian War Criminals: Biographic Narrative of the Invader. 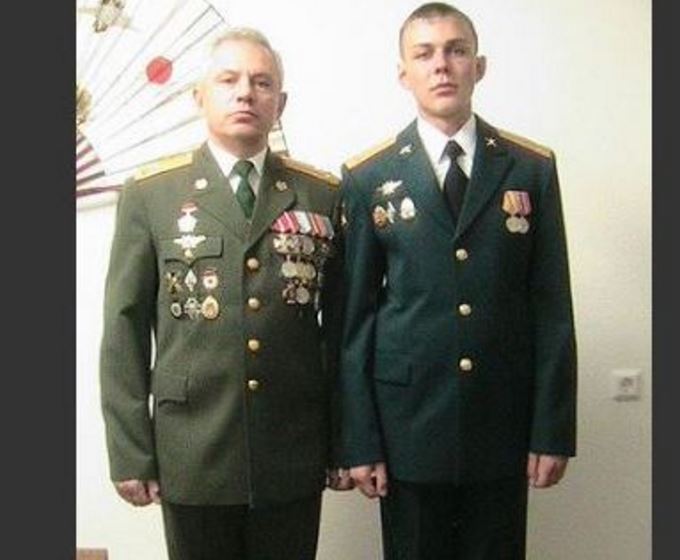 291st Artillery Brigade has been repeatedly featured in InformNapalm publications. Including this publication, there is now a total of thirteen articles:

This publication is based on OSINT investigations of the InformNapalm international volunteer community.

2 Responses to “Dynasty of Russian War Criminals 2: “Thank You Daddy””