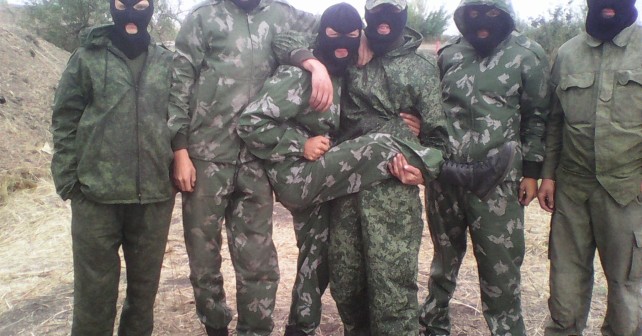 The local antiterrorist operation in the Eastern Ukraine could end 1.5 years ago, when the Ukrainian servicemen had a successful advance against armed gangs’ forces and were close to encircling them near the state border in Luhansk Oblast. Realizing that militants had not enough forces, Russian Armed Forces started a tactics of rocket-artillery strikes from the Russian territory of Rostov Oblast. Right after that they invaded Ukraine with their tactical groups, which were concentrated along the border. There is a lot of evidence, which describe what happened those days and, despite the attempts of the Russian security services to prevent any informational leak, the global network still has information which proves the fact of the invasion. The InformNapalm international volunteer community has decided to present a set of investigations, in terms of which we will present additional proofs of the participation of the Russian artillery in a war in Donbas. This will include the information about particular units and the Russian criminals of war, who were taking part in the shelling of the Ukrainian forces from the foreign territory.

Back in September 2014, InformNapalm had presented a combined information about the Russian invasion forces group, which was concentrated along the border of Ukraine in the Rostov Oblast of Russia. Then we collected the information about the artillery units of Russian army group, which was then reflected in further publications supporting the statement of participation of particular Russian army’s units in the hybrid war. Some investigations did mention the 291st artillery brigade (1, 2, 3). The information which includes all facts of the invasion was reflected in the material named ‘Professional Russian army in Ukraine. Database and Visualization‘.

The number one in our list of the Russian artillery units was the 291st separate artillery brigade (military unit No. 64670, Troitskaya, Republic of Ingushetia, the 58th general army, Southern Military District of the Russian Armed forces). It was then noticed numerous times in terms of ‘Rostov-Ukrainian assignments’. Moreover, in October of 2015 we assumed that trucks and towed artillery which were noticed in Syria are part of the 291st artillery brigade, and then after a month this guess was proved as a result of our own reconnaissance of open data.

This publication opens new facts of participation of artillerists from the 291st brigade in the war in Donbas. It will become the first in a new series of investigations, where we are going to disclose the information about military units and separate Russian criminals of war, who were executing illegal orders.

Ilnur Ilsurovich Afliatunov was born on July 20, 1990, and now lives in the city of Kazan, Russia (archives of profile, picture albums 1, 2, 3 and contacts). His mother’s name is Nuria Afliatunova, his sister is Nailia Galiakhmetova.

I. Afliatunov was conscripted for military service in late 2013 and was assigned to serve in the Northern Caucasus in the 291st separate artillery brigade, located in Republic of Ingushetia, where he became a part of the heavy howitzers division (armed with 2A65 ‘Msta-B’ 152mm howitzers). In mid summer 2014, when the armed collision in Donbas became acute, junior sergeant Afliatunov left the military service. However, his military career did not end at that point, he had signed a 3 year contract with the Russian Ministry of Defense to serve in the same 291 artillery brigade. According to his leave certificate, issued to him in the military unit No. 64670, starting from December 24, 2014, till January 23, 2015, Afliatunov was on leave and had then returned to the place of unit deployment. 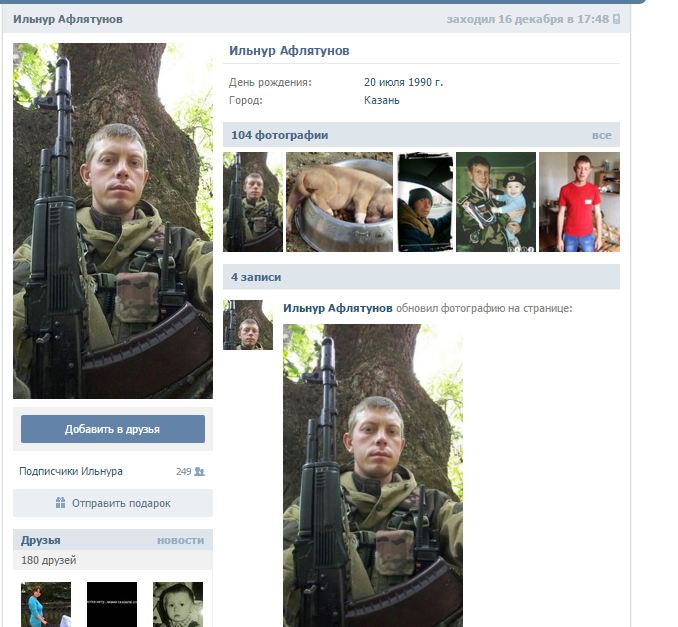 Pictures of illegal shelling of the territory of Ukraine from the territory of Rostov Oblast of Russia during the period of Summer-Autumn 2014 were uploaded to his VKontakte social network profile in September, 2014 (section ‘Saved pictures of Ilnur’). As it was informed before, there was a number of other pictures from the Kamenskiy raion of Rostov Oblast which belonged to other artillerists from the 291st brigade, and which were reflected in other InformNapalm materials. Dates when those pictures were taken, landscape, the way equipment and guns were masked together with informal uniforms of servicemen who looked like those from ‘Novorossiya’ is the evidence in itself. 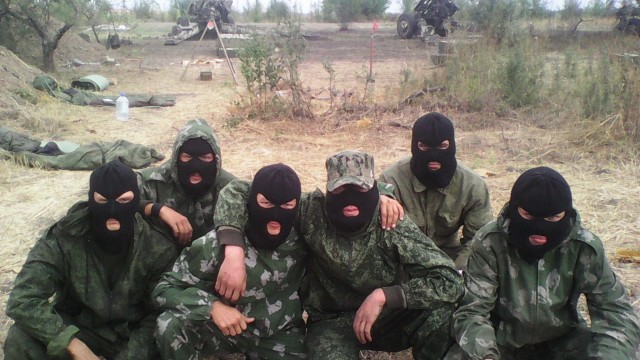 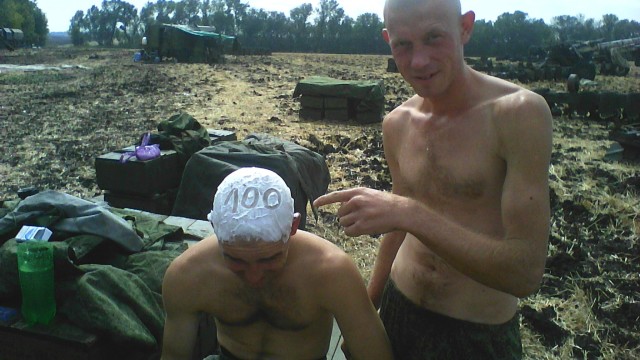 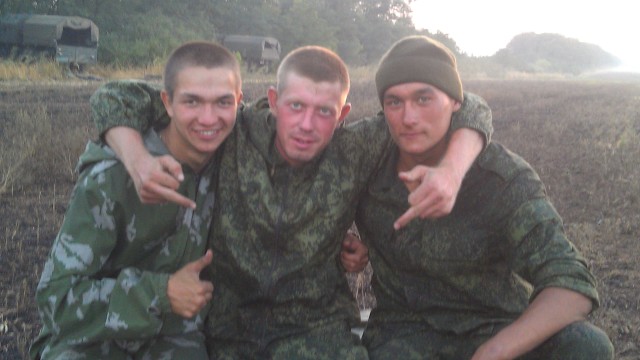 Among pictures, published on social network profiles of Afliatunov’s family members we can see several military awards: a gorget ‘For service in Caucasus’, awarded according to the order No. 888 dated on October 1, 2014, and signed by the commander of military unit No. 64670; anniversary medal ’20 years of 58th army’ and a medal ‘For battle honors‘ (archives 1, 2, 3, 4) awarded on the basis of the order of the Russian Ministry of Defense No. 677 dated on October 2, 2015 (medal number is 2266). We can also see pictures of a sergeant strap together with the order No. 4 dated on June 11, 2015 and signed by the commander of military unit No. 64670, who awarded Afliatunov the rank of sergeant. We can also see a leave certificate No. 544 dated on December 24, 2014, and signed by temporary executive commander of the same military unit.

Note: medal ‘For battle honors‘ is an institutional award of the Ministry of Defense, which is given to servicemen of the Russian Armed forces in the following cases: 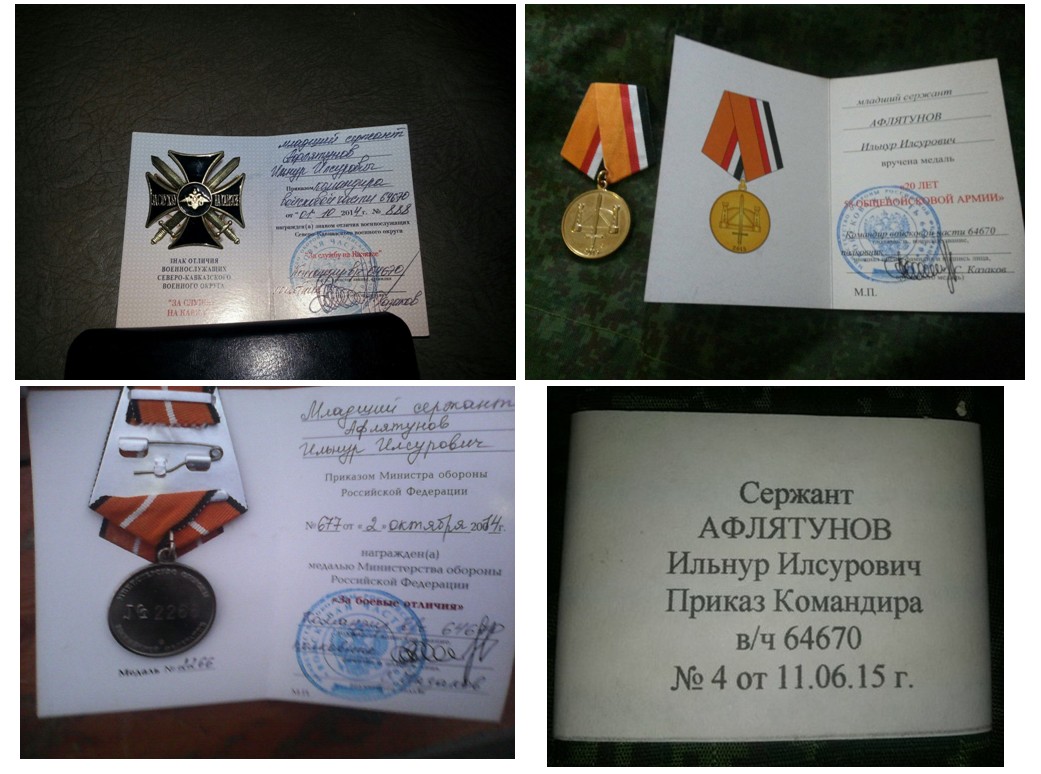 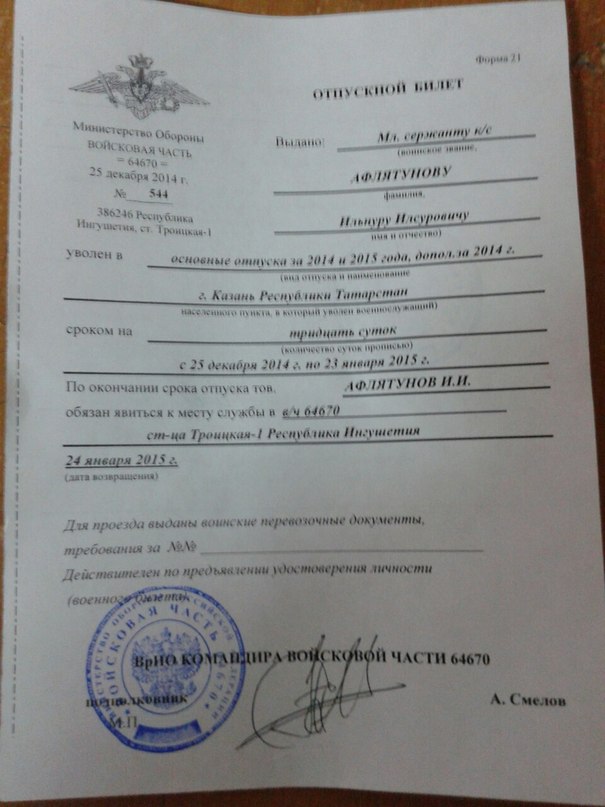 Starting from the summer of 2015 Afliatunov again uploads new pictures, which show military actions – those were from his second ‘Ukrainian assignment’. Those are pictures, where young sergeant again poses in fields, wearing full combat gear and the informal ‘Gorka’ camouflage uniform with weapon and radio station. 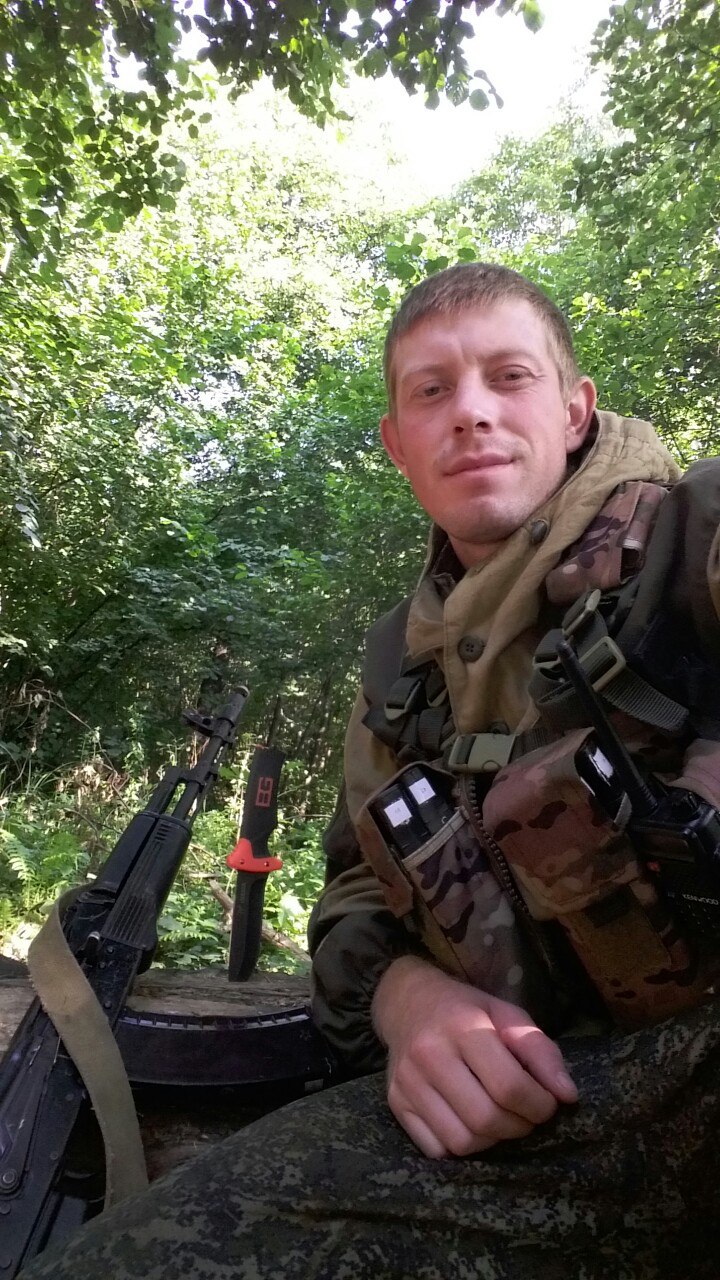 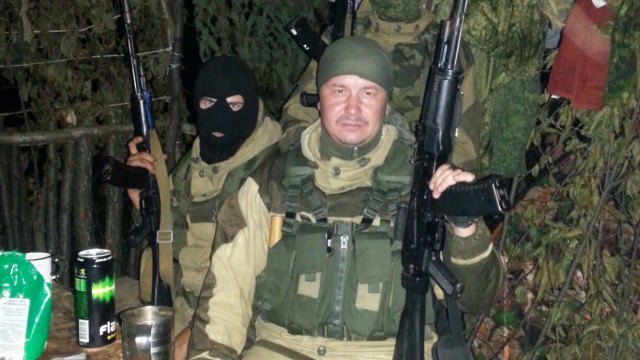 The 291st artillery brigade is not the only Russian unit which was shelling the Ukrainian territory.

In December 2014 we also published a material about a reactive unit from the 7th Russian occupation base (BM-21 ‘Grad’ multiple rocket launchers, town of Gudauta, occupied Abkhazia, Georgia).

Here are also some materials about the 291st artillery brigade:

8 Responses to “War Crimes of Russian 291st Brigade in War Against Ukraine. Part 1”