Identified: 5 soldiers from the 15th MRB who tried to hide their participation in the aggression 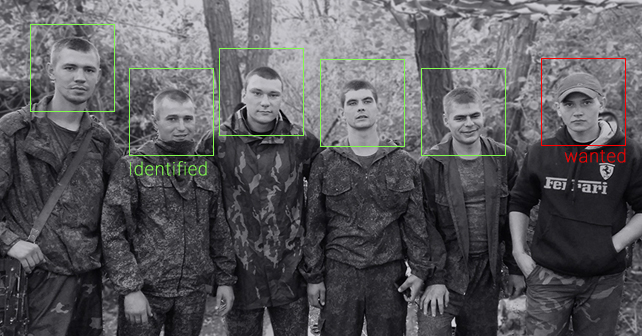 InformNapalm volunteer intelligence community publishes new evidence of participation of servicemen from the 15th Motorized Rifle Brigade (MRB), military unit 90600, Roshchinsky town, Samara Oblast in the war against Ukraine. We have collected photo and video evidence about Russian servicemen deployment in Luhansk Oblast, Ukraine in the summer and autumn of 2014. Also, we carried out detailed identification of 5 Russian contract servicemen.

The starting point for this OSINT operation was the photo from the 15th MRB contract serviceman account. In this photo, we could accurately identify 5 out of 6 investigation subjects. Moreover, additional evidence (clearly incriminating images and videos taken directly during the hostilities in Ukraine) have been found in the social media profiles of these servicemen. 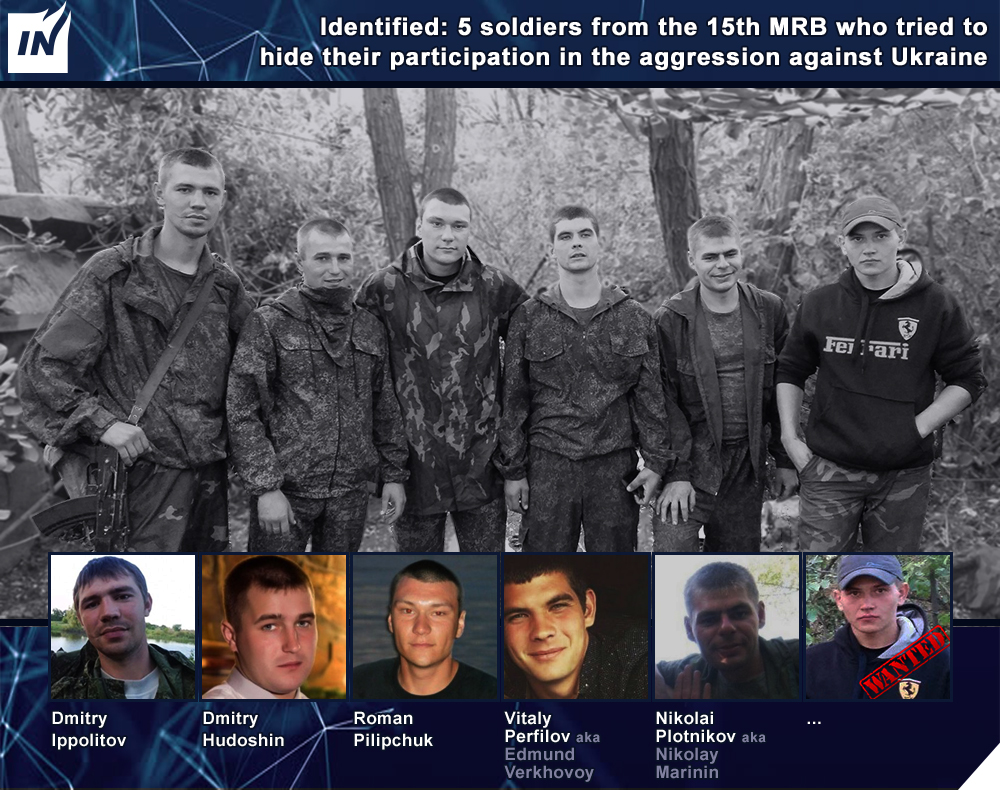 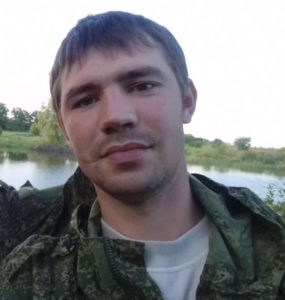 Born on March 4, 1990. Place of birth: Chapayevsk, Samara Oblast, Russia. He did his conscript military service in the Russian Army in 2009 and 2010 in military unit 95852. As of 2014, he was a contract serviceman of the 15th MRB and presumably serves there until today. Social media accounts: VK (archived profile, photos, contacts), OK (archived profile, photos, contacts).

It is also recorded that Dmitry Ippolitov tried to hide his service at the 15th MRB from his social media accounts. The photos showing his service in this unit have disappeared from his personal photo album in the past year; he also reduced the list of friends by a hundred contacts. But we saved the archives. Also, the joint photo with other suspects in the participation in invasion in Ukraine helped us to identify him. 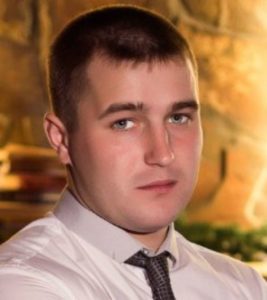 Hudoshin, like his colleagues, tried to disguise his service at the 15th MRB. But he tried to hide behind the identity of his wife. In the photo albums of the couple, there is little indication of his military service. However one image (archive in original quality), apparently left in the album on July 25, 2014 through negligence, points to the deployment in Ukraine. In the background a radio tower is visible, and next to it is the building with clearly visible Ukrainian flag above it. In addition, Hudoshin was also identified in a group photo of the 15th MRB servicemen. 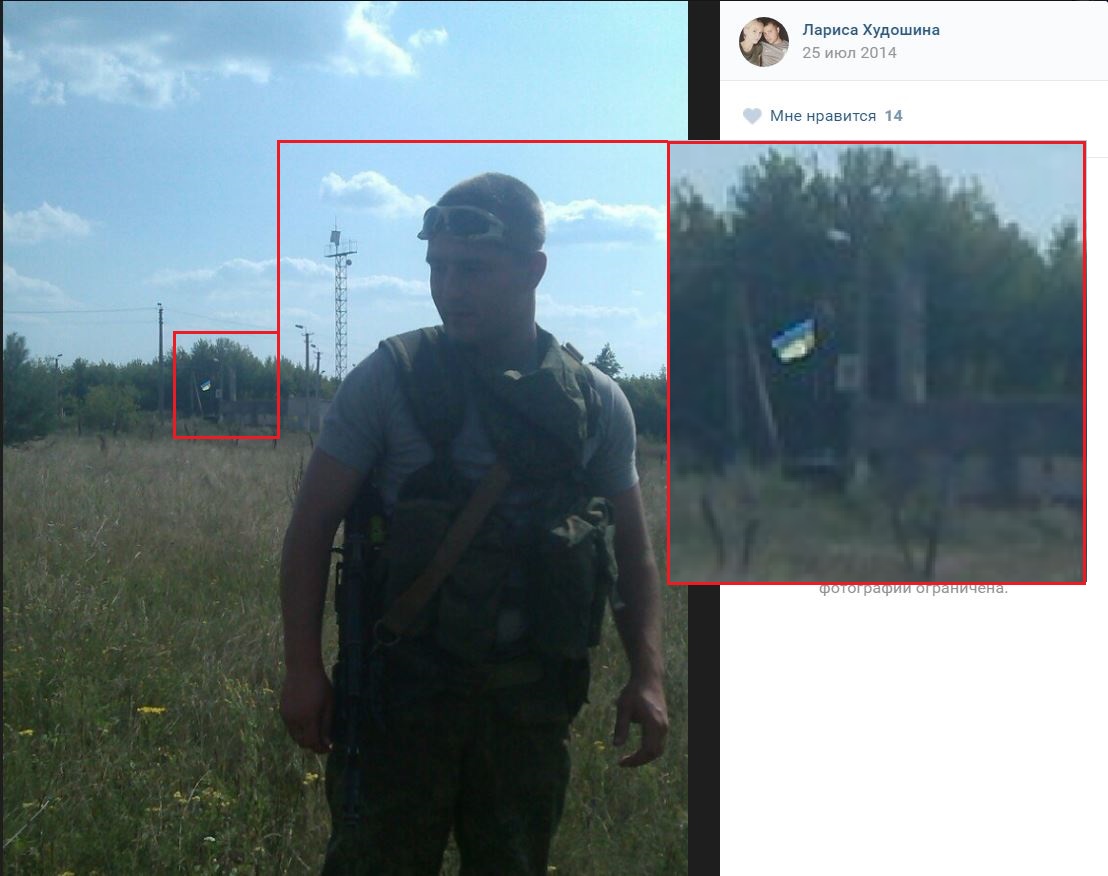 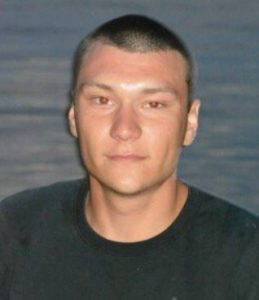 Pilipchuk, like his other colleagues, tried to hide his service at the 15th MRB, he started a new unremarkable profile with a minimum of friends and family photos. However, his three older abandoned accounts still exist. The evidence of his participation in the war against Ukraine are the following:
He was identified in the group photo; photo album of his second profile contains a whole array of meaningful photos of the 2014 deployment period, which contributed to our investigation and helped identification of the Russian servicemen, mentioned in it. Particularly, the pictures uploaded from July to September 2014. They show the field life of the Samara contract soldiers, their combat gear, non-standard uniform, identification white armbands which were typical for militants and the Russian military at the active phase of the invasion to Ukraine. Along with Pilipchuk, other contract soldiers of the 15th MRB (Ippolitov, Plotnikov and Hudoshin) were identified in these photos. 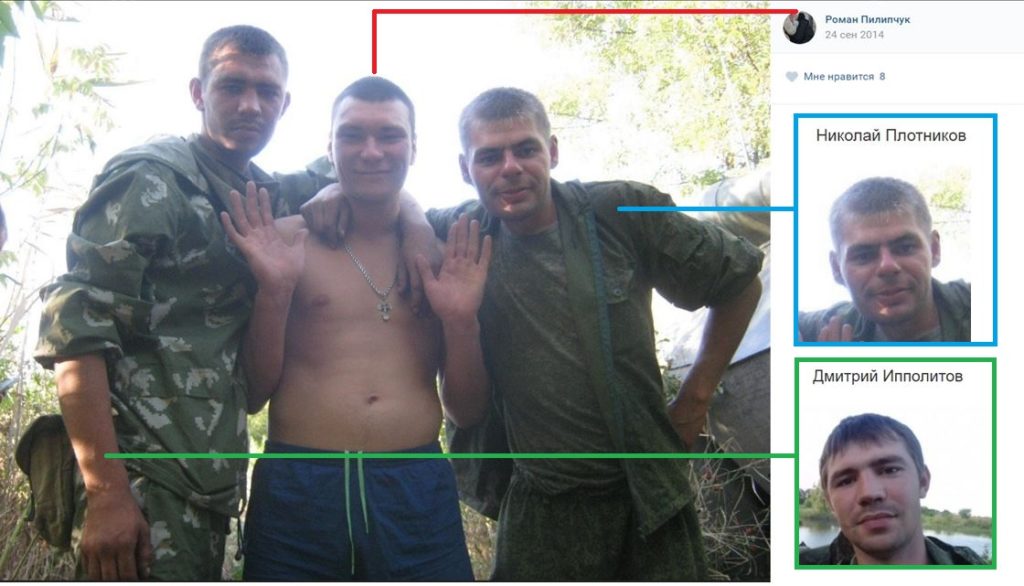 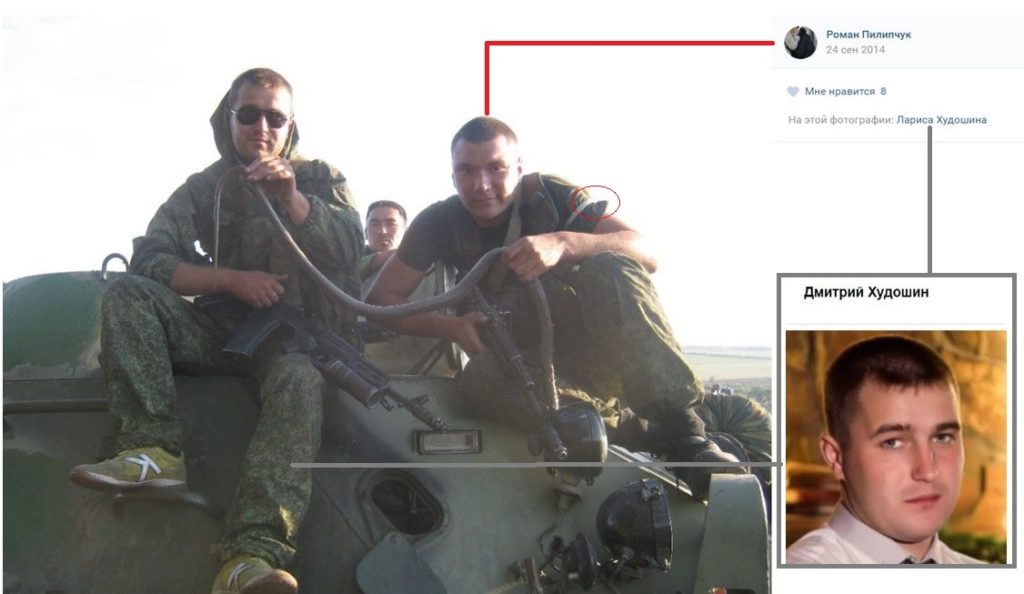 Also very telling are the pictures with destroyed equipment and ammunition, which reliably point to the fact that they were taken in the war zone. In these photos, it is easy to recognize some subjects of this investigation, as well as other servicemen of the 15th MRB. 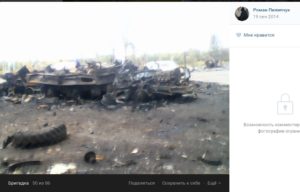 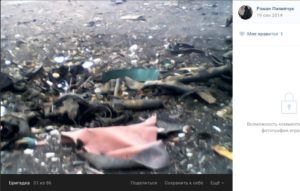 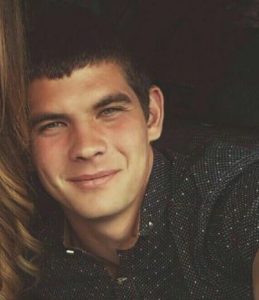 Date of birth August 6, 1991 (according to other sources – 1992). Place of birth: Chapayevsk, Samara Oblast, Russia. He did his conscript service in 2009 and 2010 in military unit 04436 (the 102nd Russian Military Base, Gyumri, Armenia). As of 2014, he was a contract serviceman of the 15th MRB and presumably serves there until today. Social media accounts: under the alias Edmund Verkhovoy VK1 (archived profile, photos , contacts), under the real name V. Perfilov VK2 (archived profile, photos, contacts).

Perfilov, like his comrades, is trying to hide his service at the 15th MRB. On social media, he writes under an alias. It was in his album, that we found the photo posted on September 13, 2014, which became the starting point of this investigation, and helped us identify a group of Russian servicemen who participated in the war against Ukraine. 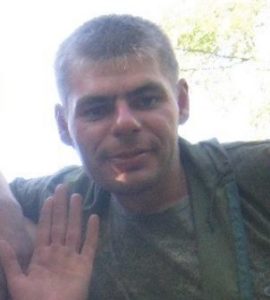 Born on December 18, 1981 in Yoshkar-Ola, Republic of Mari El. He did his conscript service in the military unit 92676 (Omsk Oblast, Tavrichesky Raion, Strela station). As of 2014, he was a contract serviceman of the 15th MRB, presumably he serves there till the present time. Social media accounts: under the alias N. Marinin VK1 (archived profile, photos, contacts) and under the real name N. Plotnikov VK2 and OK – pages inactive since 2014.

Plotnikov changed his name to an alias. But he did not get rid of the incriminationg photos, including the picture posted in December 2014 geotagged in the Luhansk Oblast, Ukraine. He also has a photo showing his awards from the Russian Ministry of Defense: a medal For the Return of Crimea and a medal For Military Distinction. Plotnikov was also identified in the group photo of the 15th MRB servicemen. 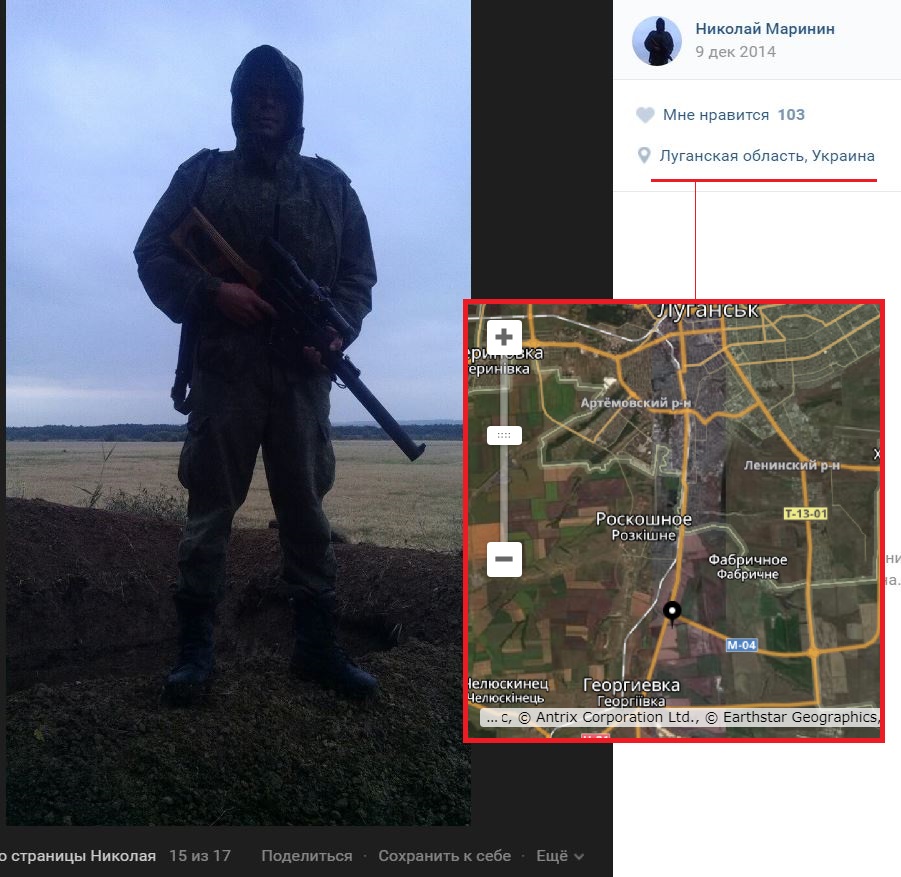 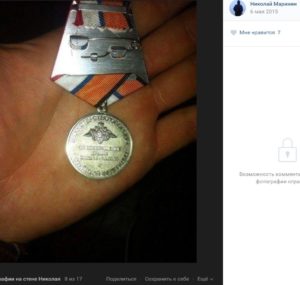 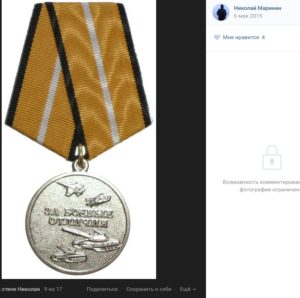 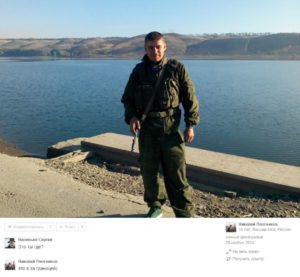 In addition to photos, there is a video posted on Plotnikov’s page in December 2014 under the heading: “How I spent the summer 2014″. The video lasting 1:51 minutes shows the convoy of armored personnel carriers (APCs) of the 15th MRB on the march in the war zone in the east of Ukraine, with destroyed buildings, burned vehicles and scorched fields. Based on the video analysis, we established the location, which is the town of Novosvitlivka in Luhansk Oblast, Ukraine. The video starts with the footage of the destroyed community center on the way from Luhansk towards Molodohvardiis’k and Sorokyne (former Krasnodon). In that video, we identified Plotnikov (at 0:21). 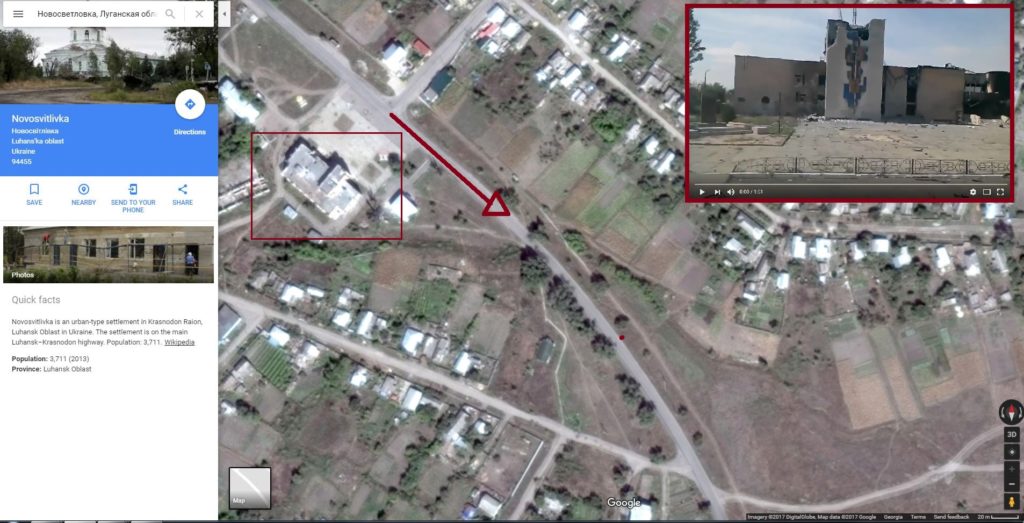 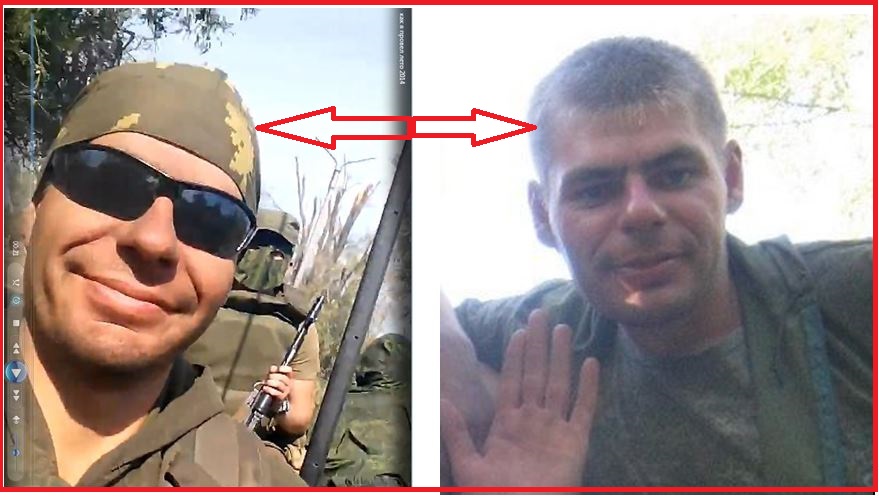 Note: another video with the same geolocation, showing another Russian “a convoy of 2C3 self-propelled howitzers of the 136th MRB on the march in Novosvitlivka, Lugansk Oblast”, was also featured in another investigation InformNapalm – Russian Artillery of the 136th Motorized Rifle Brigade Identified in Ukraine. 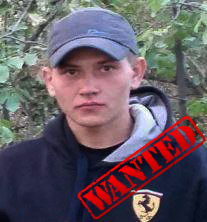 The sixth war criminal in a hoodie, code-named “Ferrari”, could not be identified so far.

At the moment, InformNapalm is studying and analyzing an array of data related to the participation of the 15th MRB in the aggression against Ukraine. New facts and identified Russian military personnel will be presented phase-by-phase, in new publications of our community.

Read more about identifying servicemen of the 15th MRB of Russian Armed Forces in Donbas:

No Responses to “Identified: 5 soldiers from the 15th MRB who tried to hide their participation in the aggression”