Journalist Dzianis Ivashin, detained in Belarus, was not allowed to attend the funeral of his grandmother 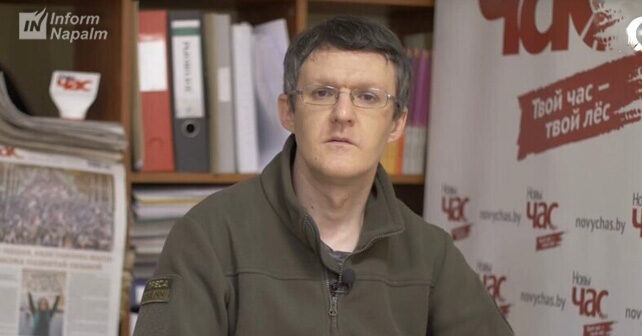 Security agencies of Belarus apply not only physical, but also psychological pressure to political prisoners of the Lukashenka regime. Apart from fabricating charges, they also exploit tragic events and grief that happened in people’s families. Thus law enforcement officers, did not allow Dzianis Ivashin, a well-known Belarusian journalist and editor of the Belarusian version of InformNapalm website to attend the funeral of his grandmother who died on May 26.

Let us remind you that journalist Dzianis Ivashin has been in custody in a pre-trial detention center in Hrodna since March 12 on trumped-up charges against him. The investigation is being conducted by the KGB of Belarus. On March 12, security forces searched the journalist’s apartment and the house of his mother with numerous procedural violations. On March 15 they also searched the house of his 95-year-old grandmother. Dzianis has been behind bars for more than 2 months. Since the beginning of May, in order to exert additional psychological pressure on Dzianis, the prison officers transferred him to a punitive confinement for 7 days.

According to the journalist’s mother, Lyudmila Ivashina, the psychological pressure and stress took its tall on Dzianis’s grandmother, and she passed away on May 26. On the same evening, Lyudmila Ivashina called the investigator in charge of her son’s case and asked if Dzianis could attend the funeral. The investigator gave a categorical “no”. The next day, a man called her from a hidden number saying that he did so “on behalf of the investigator” and informed her that “they conferred and decided to let Ivashin go to the funeral.” The employee inquired twice about the time and place of the funeral.

“Until the last moment we didn’t know whether they would bring Dzianis or not. They did not. Dzianis loved his grandmother very much and looked after her until his arrest. They even took him away with the medicines that he bought for her at the pharmacy and was going to bring to her. It is inhuman to play on such grief and manipulate. However the immorality of some law enforcement officers does not surprise anyone” – said Lyudmila Ivashina.

Dzianis Ivashin was engaged in investigative journalism. In Belarus, he collaborated with the Novy Chas newspaper. A week before his arrest, he released another investigation into how the former Ukrainian officers of the disbanded special riot police unit Berkut got employed by the Lukashenka regime. Relatives and colleagues believe that the detention of Dzianis Ivashin is connected with these investigations. Dzianis was charged under Art. 365 of the Criminal Code of the Republic of Belarus – “Interference in the activities of employees of the internal affairs bodies”. Human rights organizations have recognized Dzianis Ivashin as a political prisoner detained in relation to his journalistic activities.

Translated by Artem Velichko. Distribution and reprint with reference to the source is welcome! InformNapalm materials are available under a public license Creative Commons Attribution, CC BY. The condition for using our materials is a hyperlink to the original source in the first or second paragraph of your publication. InformNapalm social media pages: Facebook / Тwitter

No Responses to “Journalist Dzianis Ivashin, detained in Belarus, was not allowed to attend the funeral of his grandmother”