Service record of contract soldier from the 7th military base: Crimea, Donbas, Abkhazia

Since the beginning of the Russian aggression against Ukraine, much has been written about the Russians serving at the 7th Military Base of the Russian Army deployed by the occupiers in Abkhazia (military unit 09332, Gudauta town, occupied Abkhazia Georgia). InformNapalm archives contain more than 30 publications that one way or another are connected to the 7th Military Base. The most explosive and interesting investigations were focused on the participation of tactical groups, recon units, and the artillery of this military unit in the so-called Rostov-Ukrainian assignments in the summer and fall of 2014. We also published data about the massive outflow of contract soldiers and awards of the occupants form Gudauta based on the results of their Ukrainian and Syrian assignments.

Both at the 7th Military Base and elsewhere we have repeatedly observed hybrid Russian military, with previously contract soldiers suddenly becoming “Novorossia” militants, as well as former “L/DPR militants” changing the gangster Gorka camo suits for regular Russian military uniforms with the regalia of the Russian Armed Forces and the chevrons of specific military units of the Russian Army.

The soldier we are making famous this time is almost the same as his colleagues, other “hybrid warriors”, except, unlike the others, he didn’t just take part in the hostilities in the Donbas, but was also in the vanguard of the Russian invasion to Crimea in spring 2014. 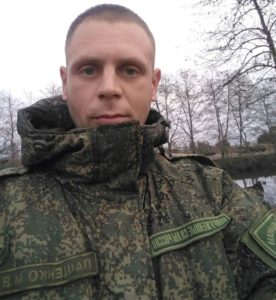 According to the personal data records:

Since 2004, he has served in military unit 09332. Apparently, after completing conscript service, he immediately signed the contract.

It appears that he serves in the reconnaissance company of the 7th Military Base (Until 2009, the 7th Military Base, military unit 09332, was the 131st Maykop Separate Motorized Rifle Brigade. It was defeated by patriots of the Chechen Republic of Ichkeria on December 31, 1994). For a number of years, units of the Maykop brigade were on duty as a part of the so-called Collective Peacekeeping Forces in Abkhazia. After the Russian aggression against Georgia in August 2008, the 131st Maykop Motorized Rifle Brigade was reorganized into the 7th Military Base and deployed in Abkhazia)

Among the photos found in Maxim Pashchenko’s albums, there are many curious ones – related to his service in Abkhazia, as well as his everyday life as a “Novorossia” militant, uploaded in 2012-2019. Perhaps the most curious pictures are:

The picture, uploaded on March 31, 2014, taken in Simferopol (Crimea), against the background of the so-called monument “Shot in the back” (opened in 2007), where Pashchenko poses in Russian military uniform with a chevron that looks similar to the symbols of the IAG “Terskaya Wolf Hundred” that served as a cover for the agents of the GRU / FSB operating in Crimea in the spring of 2014 as a part of the so-called self-defense of Crimea and later on in the Donbas. Another photo is from Chornomors’ke village in Crimea – against the background of the monument to internationalist soldiers “The pain of Afghanistan is in my soul,” uploaded on September 13, 2014, where the soldier poses in shorts. 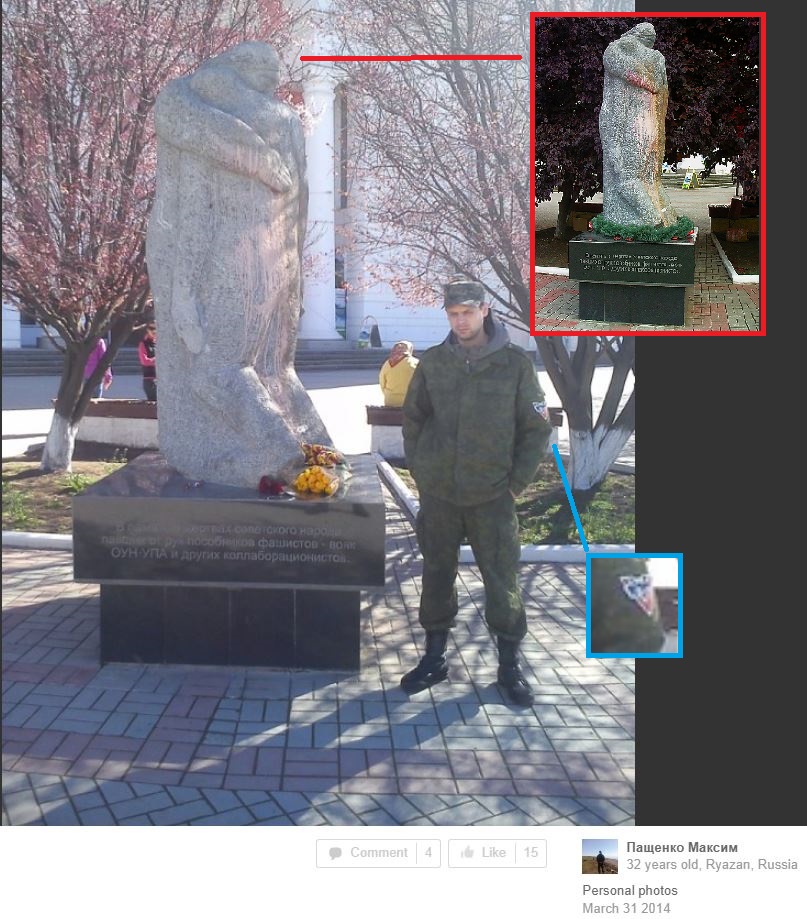 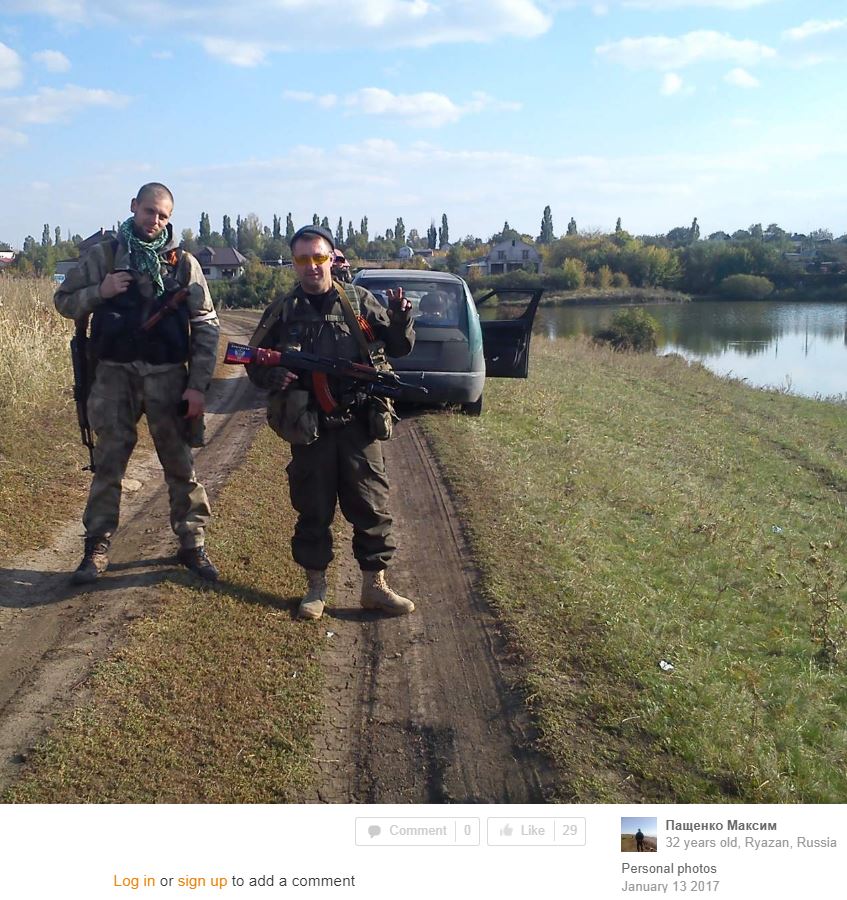 It is not difficult to identify the Russian contract soldier Maxim Pashchenko in a number of group pictures of Novorossia militants from 2014, including pictures from albums of the aforementioned “Terek” gangsters — Russian secret service agents, who were among the first to be deployed to provoke the conflict in the Donbas. 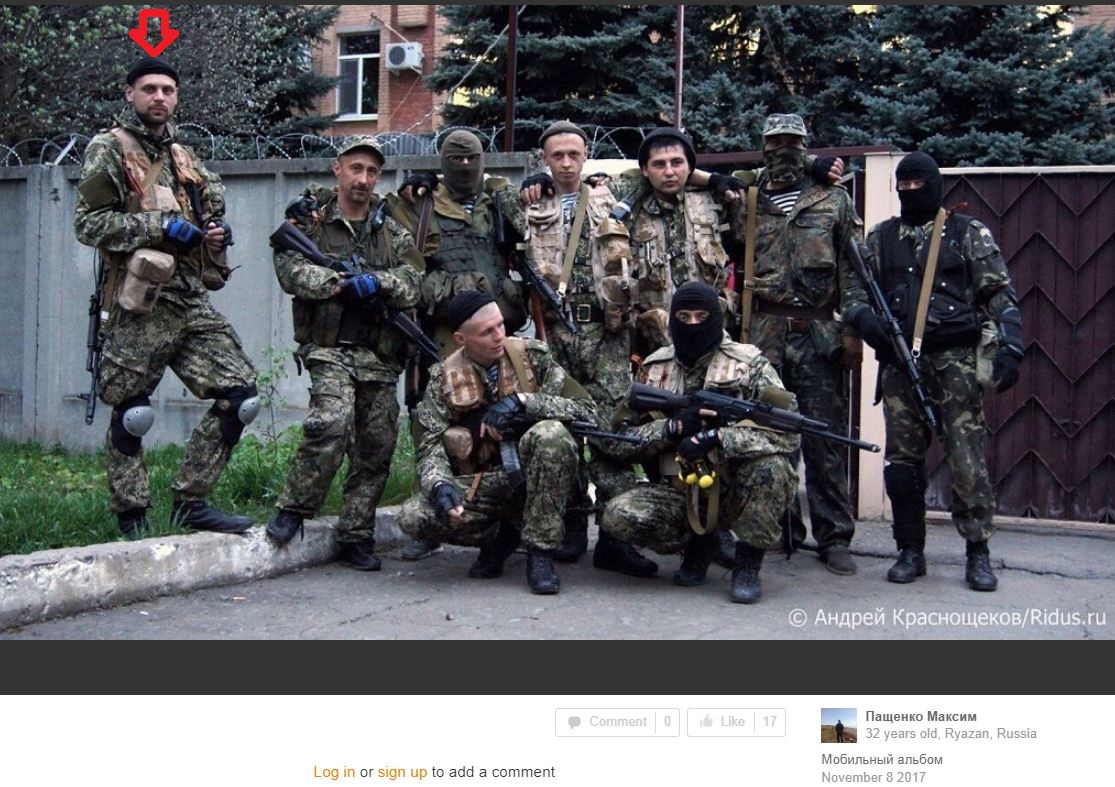 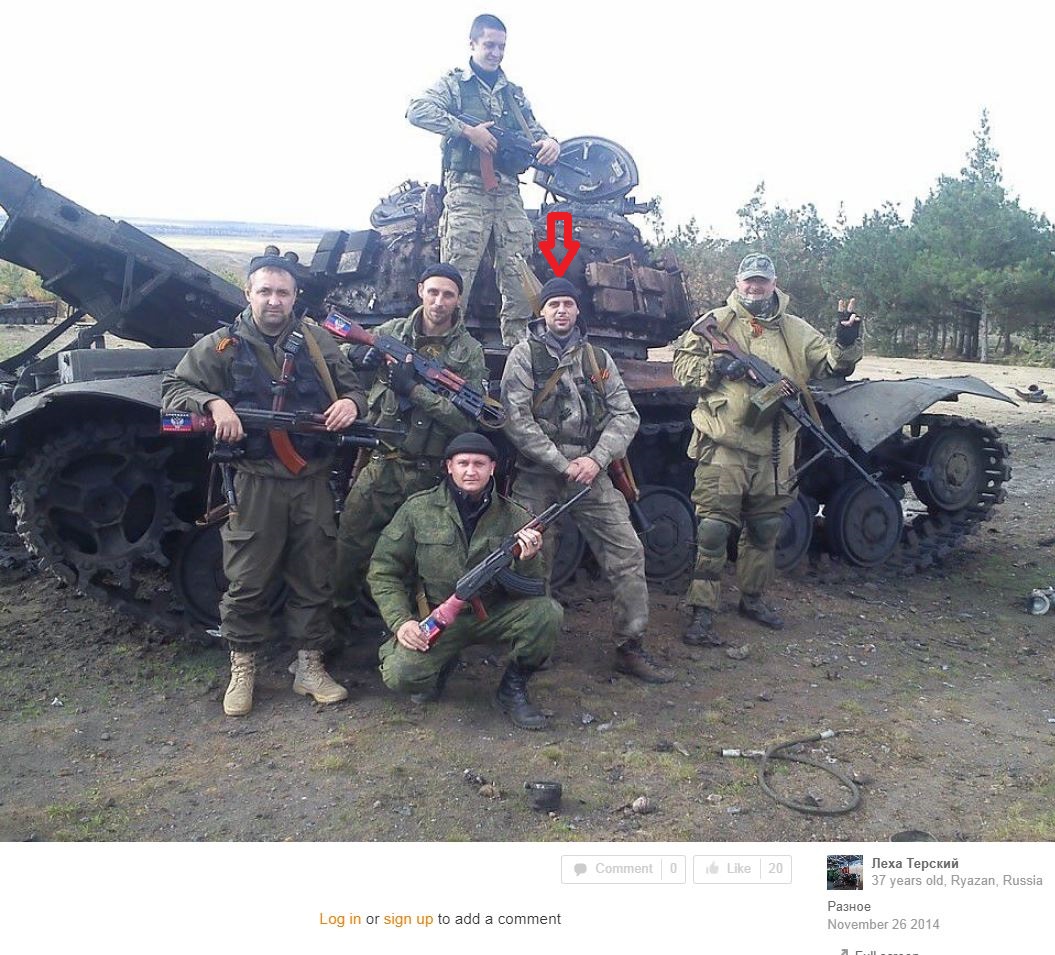 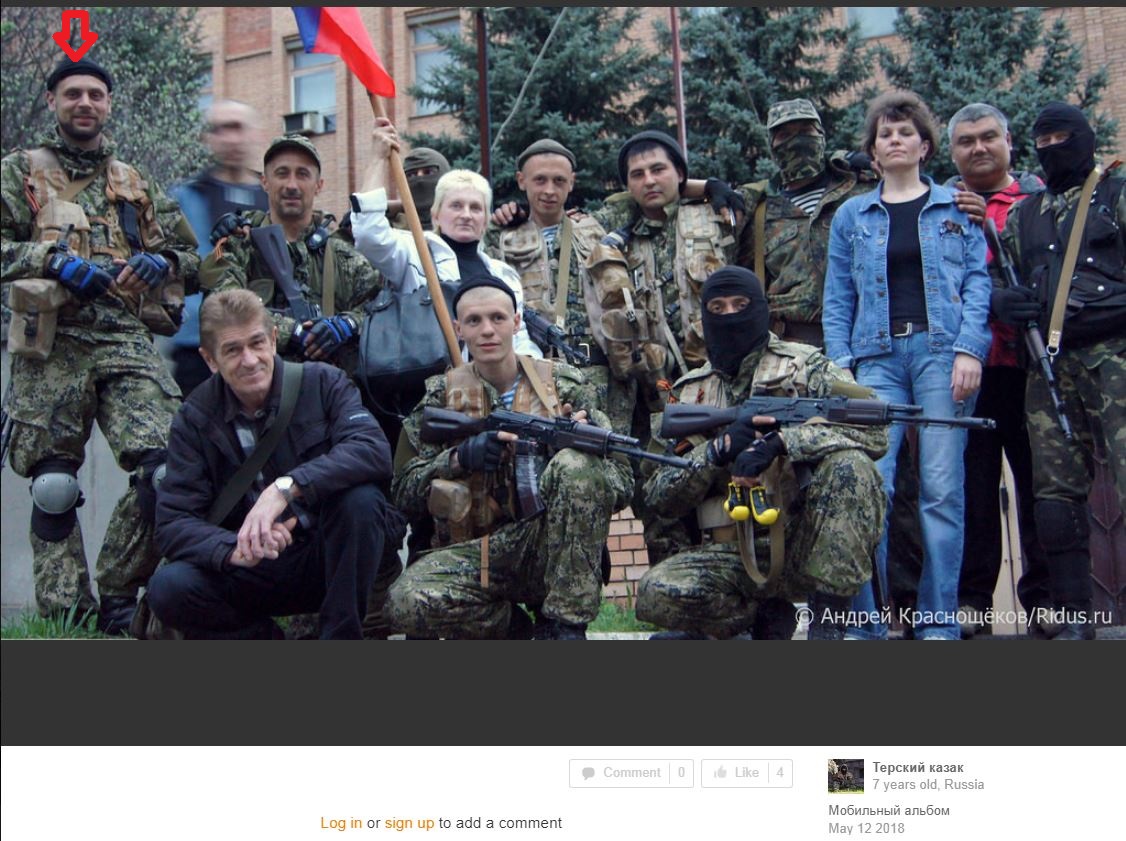 Also in Pashchenko’s albums there are many photos from the occupied Abkhazia – the city of Gudauta, the “Tsebelda” training area, as well as Kodori Gorge. 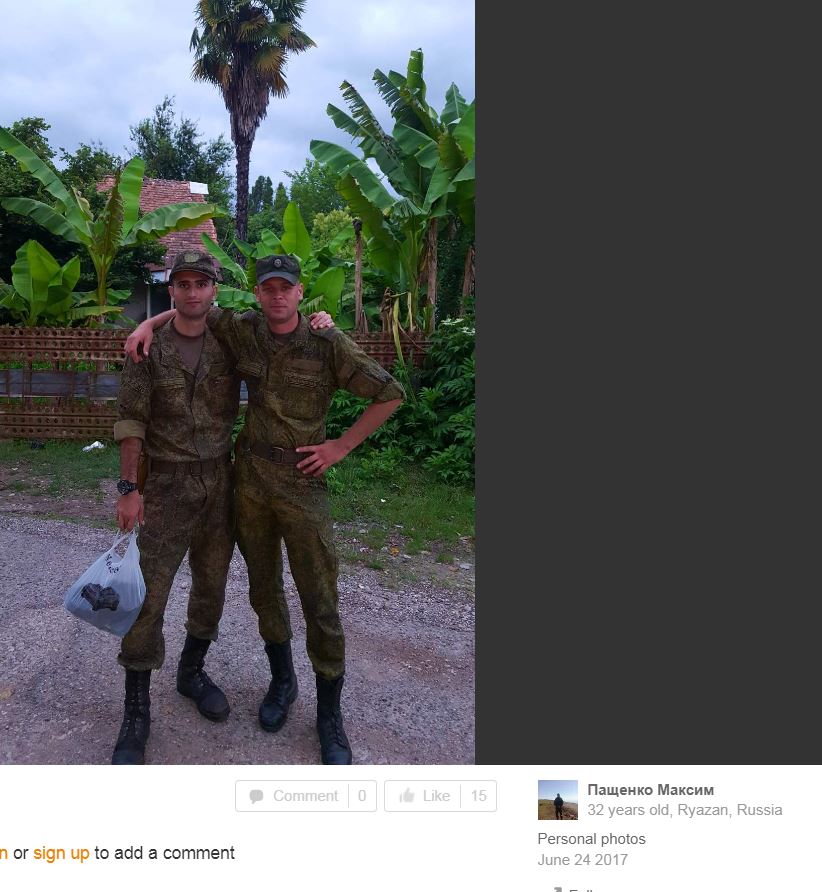 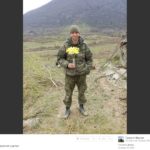 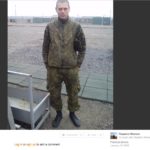 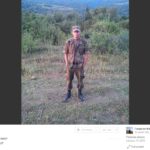 Reference data of the 7th Military Base (source – http://milkavkaz.com/):

The 7th Military Base, military unit 09332 (Georgia, occupied Abkhazia, Gudauta, belongs to the 49th Army of the Southern Military District of the Russian Federation), began to take shape in 2009, after the Russian invasion to Georgia in 2008. It was organized on the basis of the 131st Maykop Separate Motorized Rifle Brigade.

The personnel of the occupation force consist of both conscripts and contract soldiers.

The main armaments of the Gudauta base include:

During the additional investigation, it was determined that the tank in one of Pashchenko’s photos belonged to Ukrainian Armed Forces and was damaged in a fight next to Sontseve settlement (Donetsk Oblast, Ukraine). It can be seen at the beginning of a video shot by terrorists. There is also some information about this tank on the LostArmour site.

Another photo evidence of this soldier’s participation in the war in Donbas: the picture in the article published on April 23, 2014 in “Time” (archive), in which Pashchenko is depicted next to Alexander “Babai” Mozhaev, the Russian terrorist from the Girkin group: 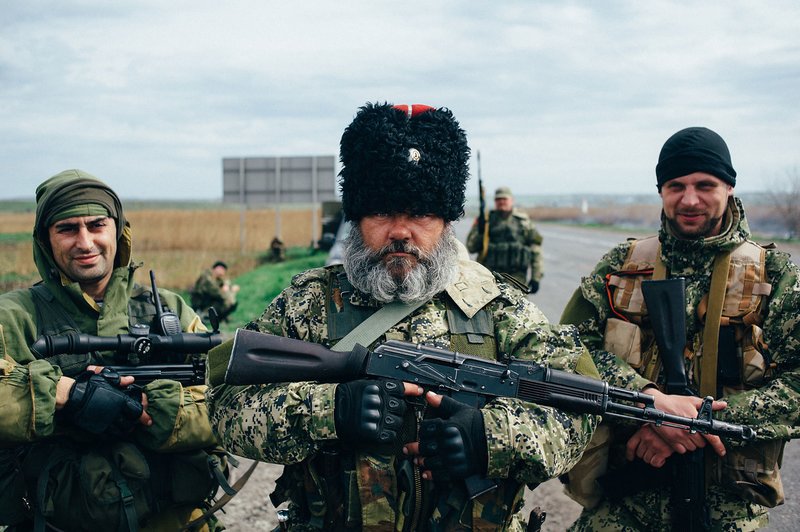 This publication was prepared by Irakli Komaxidze on the basis of his own OSINT investigation specially for InformNapalm.

No Responses to “Service record of contract soldier from the 7th military base: Crimea, Donbas, Abkhazia”