Tracking Down the Russian 66th Signal Brigade: from Donbas to Syria 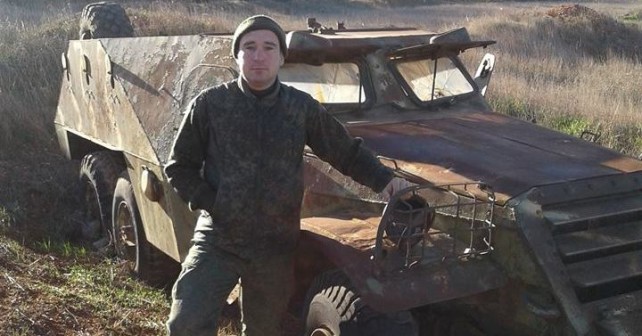 Volunteers of the InformNapalm community have documented another fact of the ‘Novorossiya-Syria assignment’ of a communication unit from Stavropol (Russia). The details of the maneuvers of the Russian 66th separate signal brigade were disclosed by a Russian serviceman of this unit who had been previously sent also on a ‘Rostov-Ukraine assignment’.

During this OSINT investigation we found out the personal information about Ruslan Skaev a contract serviceman of the 66th separate signal brigade (military unit No. 41600, 49th general army, Southern military District, Stavropol, Russia). 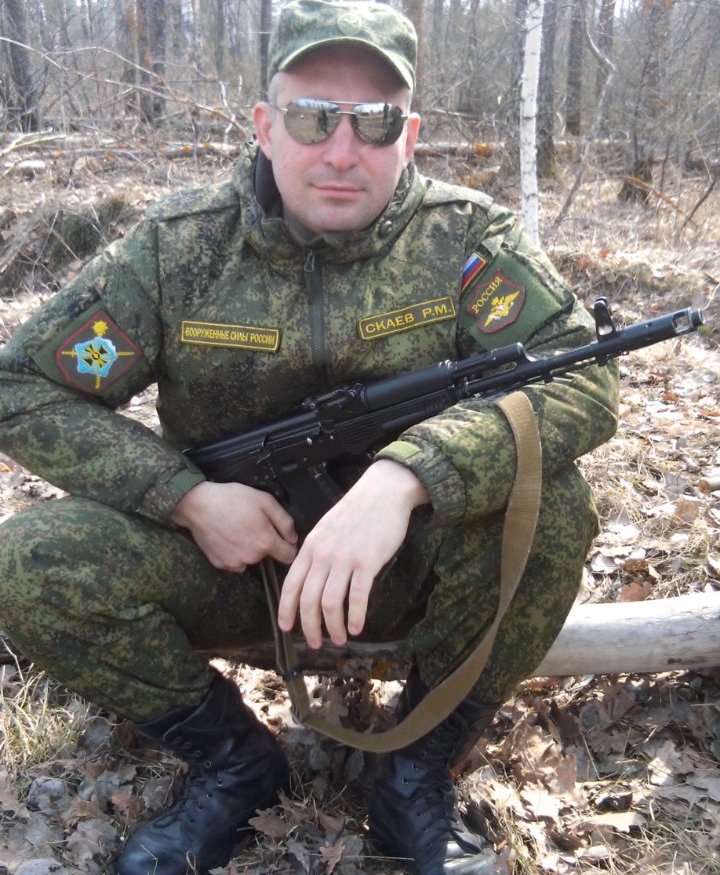 The Ukrainian assignment of Ruslan Skaev

According to the Skaev’s album, serving in the 66th brigade he participated in the hybrid war against Ukraine. This is proved by the photos uploaded by him on March 28 and April 28 of 2015. The first picture shows Ruslan Skaev posing together with his brothers-in-arms in front of provincial buildings, the personnel is in full battle gear wearing informal cloths (old Russian ‘flora’ camouflage) and without any insignia. The second picture shows the same people sitting around a table in a field camp and wearing the same ‘flora’ uniform, some have masks put on. The photo is definitely ‘fresh’ (taken in the summer or fall of 2014) which is proved by the commendation letter for the ‘For military distinctions’ medal No. 3380 on an order by Russia’s Minister of Defense No. 809 from December 10, 2014, signed by colonel V. Probchenkov, the commander of the military unit No. 41600.

Note: The ‘For military distinctions‘ medal is a departmental award of the Ministry of Defense of the Russian Federation. Only the Russian servicemen can be awarded with this medal for:

The medals of the same kind have been also registered in the pictures of other servicemen which had been sent on the ‘Ukrainian assignment’, including the ones published by InformNapalm in December of 2015 (1, 2). 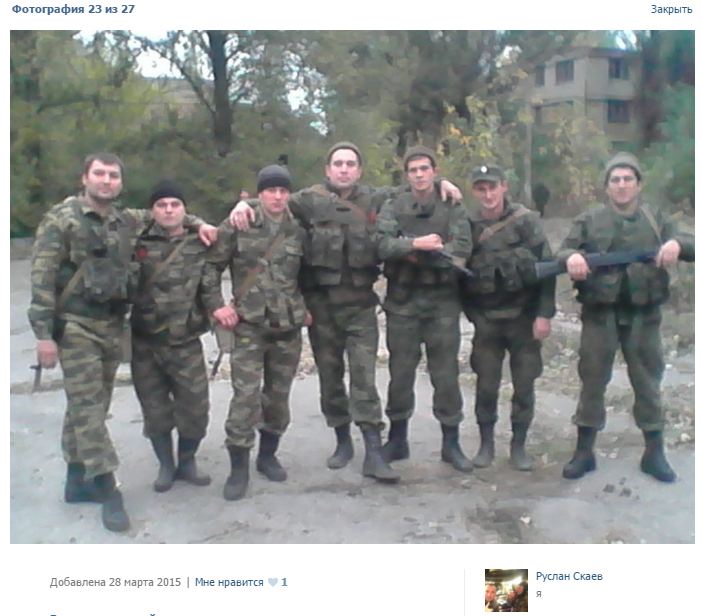 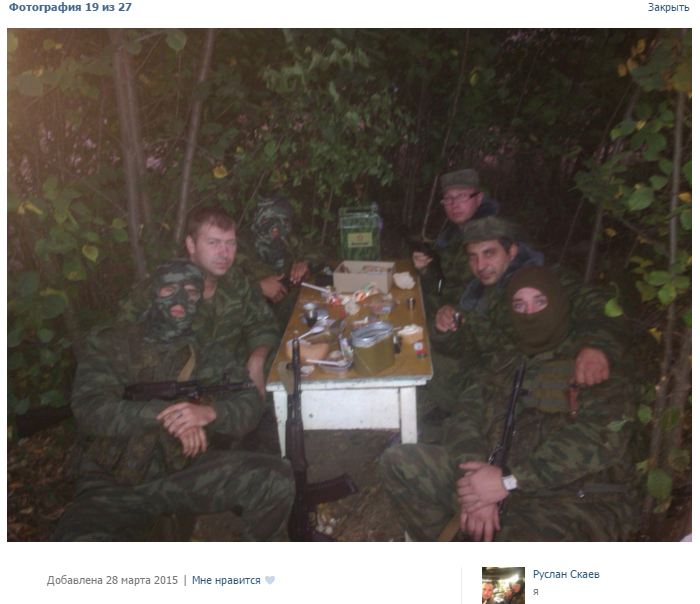 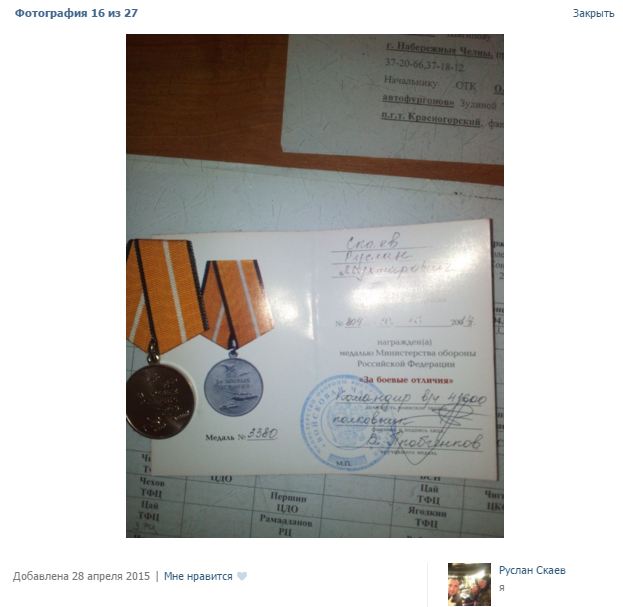 The Syrian assignment of Ruslan Skaev

Skaev’s album contains a set of pictures uploaded on December 13, 18 and 23 of 2015. Two of them show flora not typical of the Russian Northern Caucasus, also the appearance of the servicemen is not formal. Moreover, one of the photos presenting the Russian servicemen sitting in a military vehicle has a ‘Homs province, Syria‘ geotag. 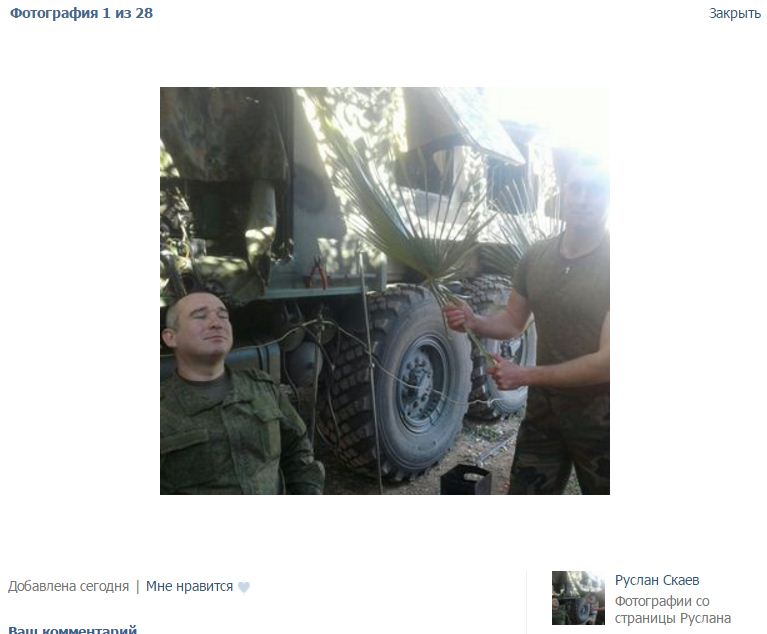 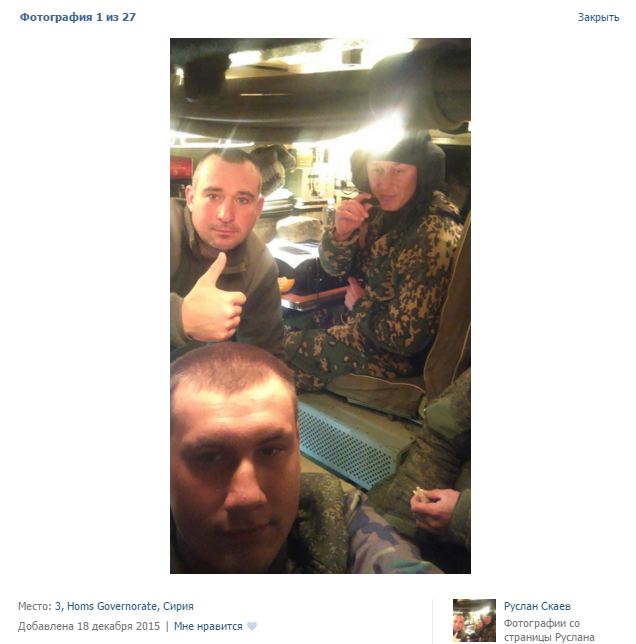 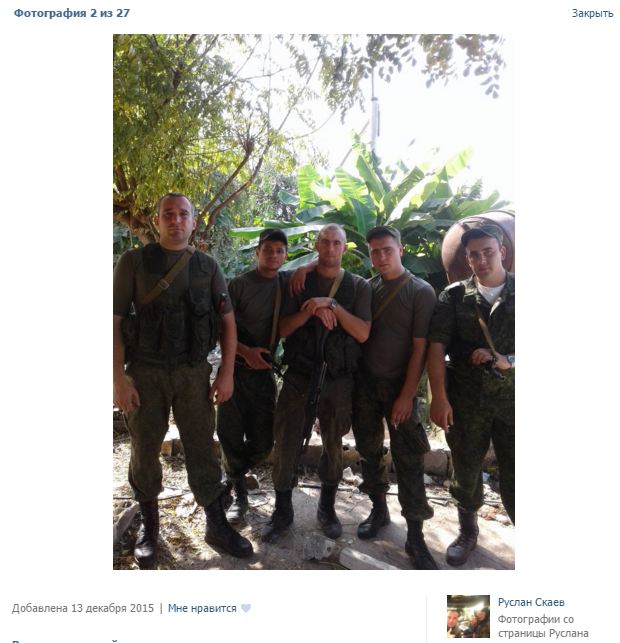 These are the archives of the Skaev’s photos from Syria on VKontakte account (1, 2, 3)

Yes, skeptics may say that such vegetation can be found in Sochi or Abkhazia (region of Georgia occupied by Russia), and that geotag can be faked. But InformNapalm proves the opposite with the help of facts:

A page of Ruslan Skaev was found in the Facebook network (archive), where he uploaded the abovementioned pictures between December 13-18, 2015. There is also a picture of remainings of Soviet BTR-152 APC, a real rarity from 1950s. This type of armored vehicles has been removed from service for several dozens of years already and cannot be found in the Russian army any more. But according to the open sources, up to 500 units of this vehicle were still in service of the Syrian army in 2010 (refer to ‘BTR-152‘ and ‘Syrian army‘). Also we were able to perform georeferencing: the picture was taken to the South-East of Homs, in the territory of a Syrian military base, where assumably the signalmen from the Stavropol signal brigade were based. The satellite photos clearly show caponiers for the equipment and the equipment itself (just like the one in the picture by Skaev). 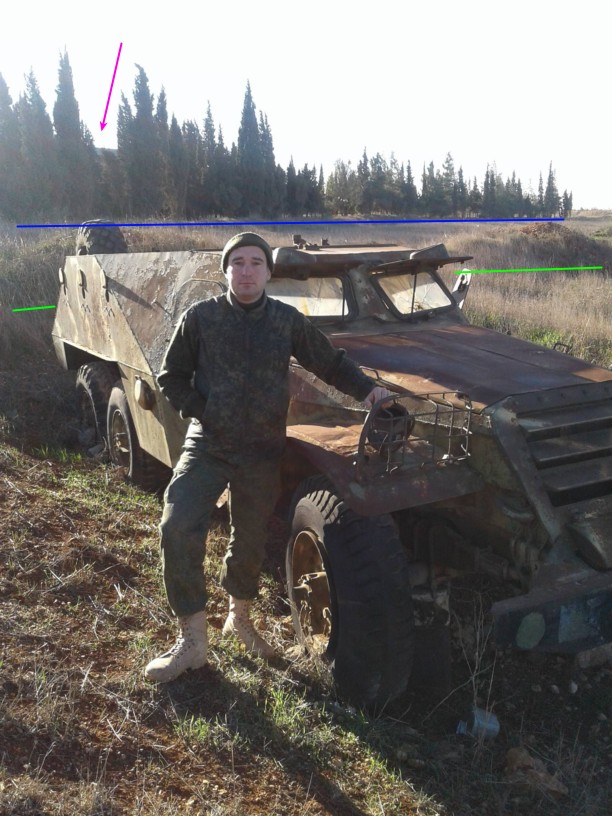 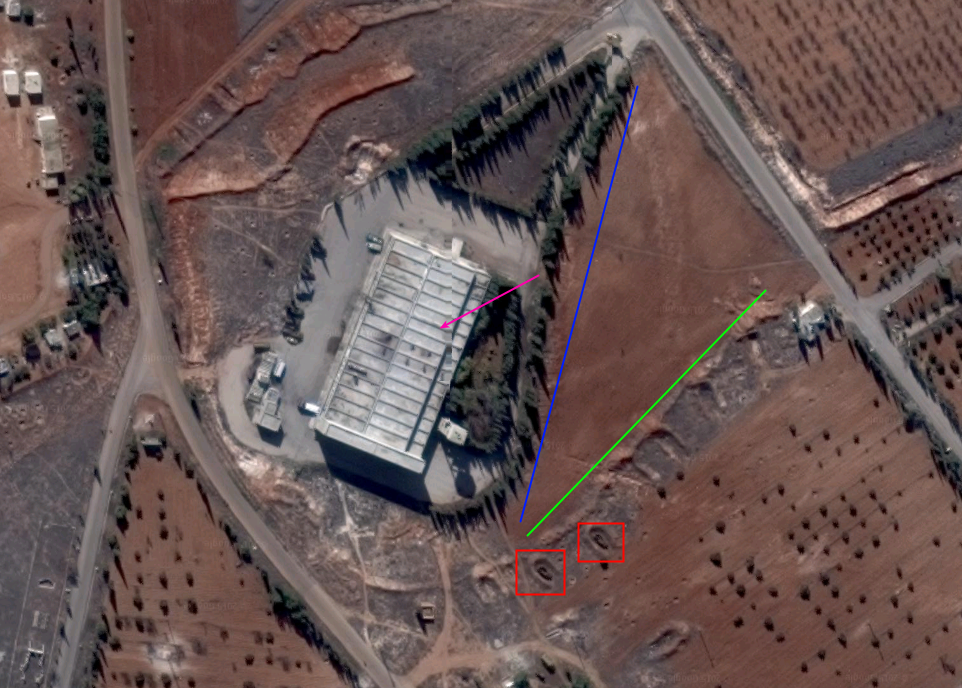 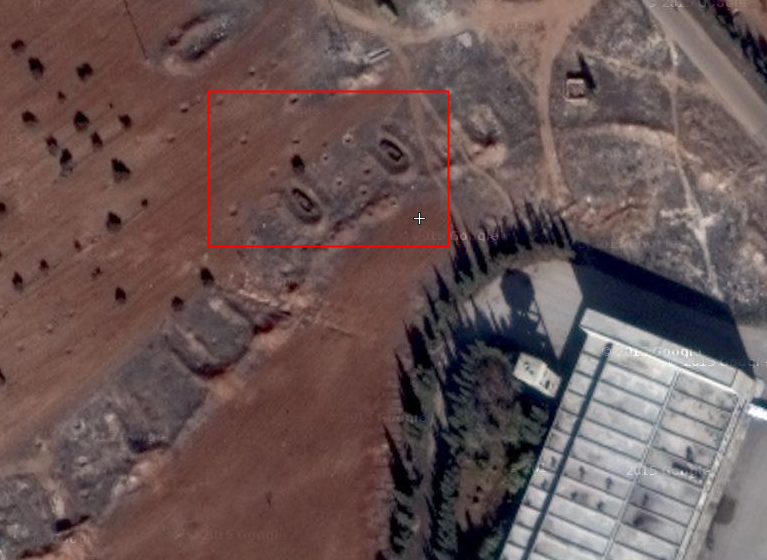 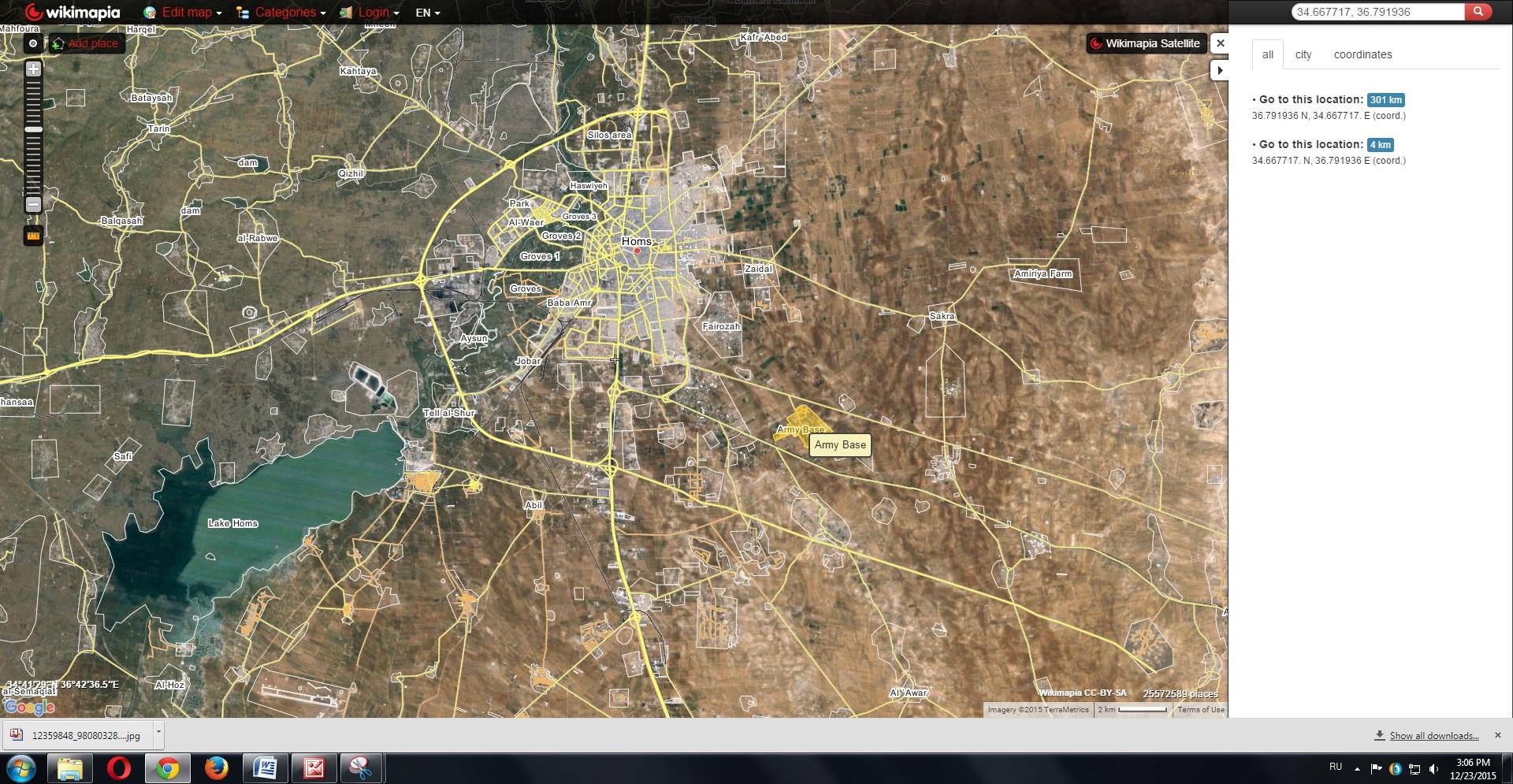 We’d like to note that the InformNapalm international volunteer community was one of the first to document and prove the presence of the Russian ground forces in Syria. Moreover, we have disclosed not only the types of the Russian weaponry and the names of the military units deployed to the Middle East, but also the names of the Russian pilots-criminals and artillerists who (together with the criminal regime of al-Assad) kill the peaceful Syrian population. Also we have traced the way that Russia paved to the ground operation through the sea via the ‘Syrian express’.

Syrian assignment of the Russian armed forces (without aviation component)

More information with ‘Syria‘ tag to be found on InformNapalm.

6 Responses to “Tracking Down the Russian 66th Signal Brigade: from Donbas to Syria”