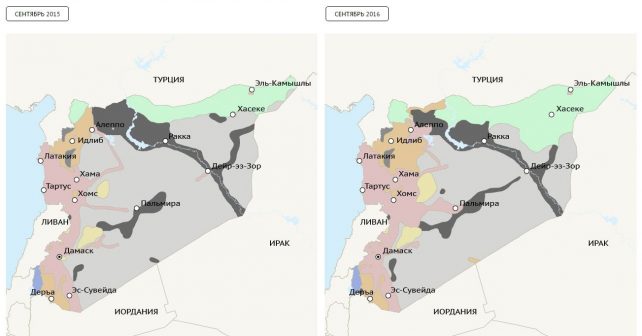 On September 30, 2015, Russia officially launched its military operation in Syria. InformNapalm international intelligence community has been at the media forefront of this war from its very first days. In this article, we will look at what has been happening in Syria over the past year and how our OSINT experience from Donbas helped us in Syria.

The civil war in Syria started in 2011, and for several years the world persistently ignored the Syrian events. There were alarming reports coming at times about Islamists, executions of civilians or use of chemical weapons. But bad news from the Middle East were commonplace.

Our first article in the “Syrian series” was published on September 7, 2015 – three weeks before the official start of the Russian Air Force operation. We drew attention to the Russian military base in Tartus, which had been largely forgotten even in Russia since the 1990s. It turned out that with the beginning of the war in Syria, it came to life again and started actively receiving Russian Navy ships. Multitudes of photos – loading and unloading, port calls, naval and military life, images of military cargo – were posted in 2012-2014.

Read: Tartus As The Hub of Russian-Syrian Friendship

Actually, it was those photos of cargo gave away intensive preparations for the military operation: it turned out that there was a whole crowd of maritime spotter photographers documenting the passage of ships. In August 2015, a Turkish blogger photographed the Russian landing platform/dock (LPD) Nikolai Filchenkov passing through the Bosporus loaded with military equipment. That got it all rolling…

We analyzed online groups dedicated to the Russian LPD’s, and it turned out that they had been hectically active for several months shuttling to the Syrian port of Tartus. Apparently something was cooking there.

And rumors about possible missions to Syria had circulated as early as 2013 in the Russian Army.

The Turkish website Bosphorus Naval helped us a lot with the straits traffic analysis by meticulously photo-documenting all the passages through the Bosporus.

Two weeks before the official start of the military operation, we analyzed the traffic through the Bosphorus, and it turned out that in the years 2013 to 2015 there more than 50 voyages of ships and vessels of the Russian Navy that went to Syria. More than 70% of the total traffic was operated by LPD’s, which were used to carry military equipment to help Bashar al-Assad.

Traffic was growing from year to year with all the Russian fleets being involved, but the brunt of the lift was borne by the Black Sea Fleet of the Russian Federation. For the visual presentation of information, we released our first infographics on Syria. 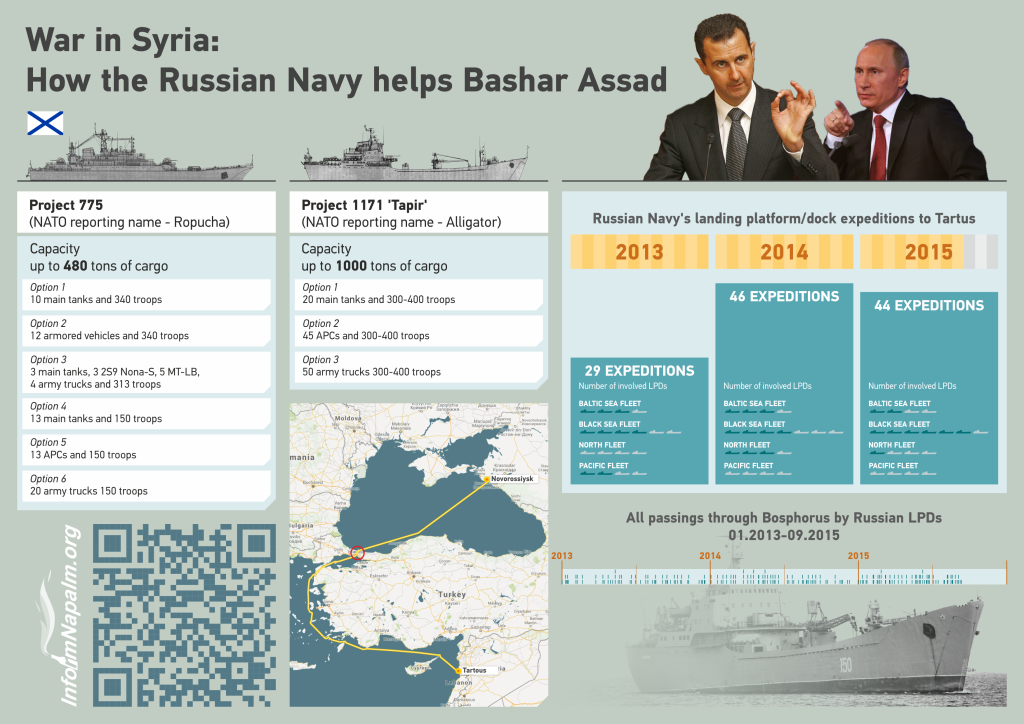 And on September 30, 2015, a military operation began “suddenly”, even though preparations for it had been going on for months.

Soon the LPD’s were joined by ferries previously used at the Kerch ferry line. By the way, it became later known that their crews had not received payment, and they went on to publish the actual number of voyages to Tartus.

We began to gradually accumulate images of service passports, which were issued to the Russian servicemen sent to Syria.

Read: It Is Hard To Survive in Syria Without A Passport. Russian 28th Brigade in Syria

It should be noted, that the operation in Syria was divided into land and air components since the first days. The media almost never wrote about the fighting on the ground and the role of Russian troops in it, but ground ops around the military aircraft and the air raids were filmed by a whole crowd of Russian journalists. We took a close look at those propaganda materials and began our work to identify the air crews. Our first unwitting helper was Murad Gazdiev, a journalist with Russia Today.

Read:Our Response to Russian Terrorists’ Provocation – Crew of Su-24M Aircraft With Side Number ’26’ Is Disclosed

Lots of materials went into this work: videos of parades, multitudes of threads on aircraft fan forums, posts on social networks and inadvertent comments of colleagues. As Ukrainian soldiers continued to die in Donbas, we decided to deliver an ultimatum to the Russian authorities: for every provocation in Donbas, we would publish personal data of another Russian military pilot fighting in Syria.

Russian Federal Security Service (FSB) started to actively read us (server logs are worth more than a thousand words), and the president’s press secretary Dmitry Peskov called it “a hostile act”.

The news even reached the Western media:

«A Ukrainian Website Is Outing Russian Soldiers, and Moscow Wants Canada to Stop It» (VICE News)

We duly noted Russia’s reaction and decided to release the first version of the infographics on Russian pilots. 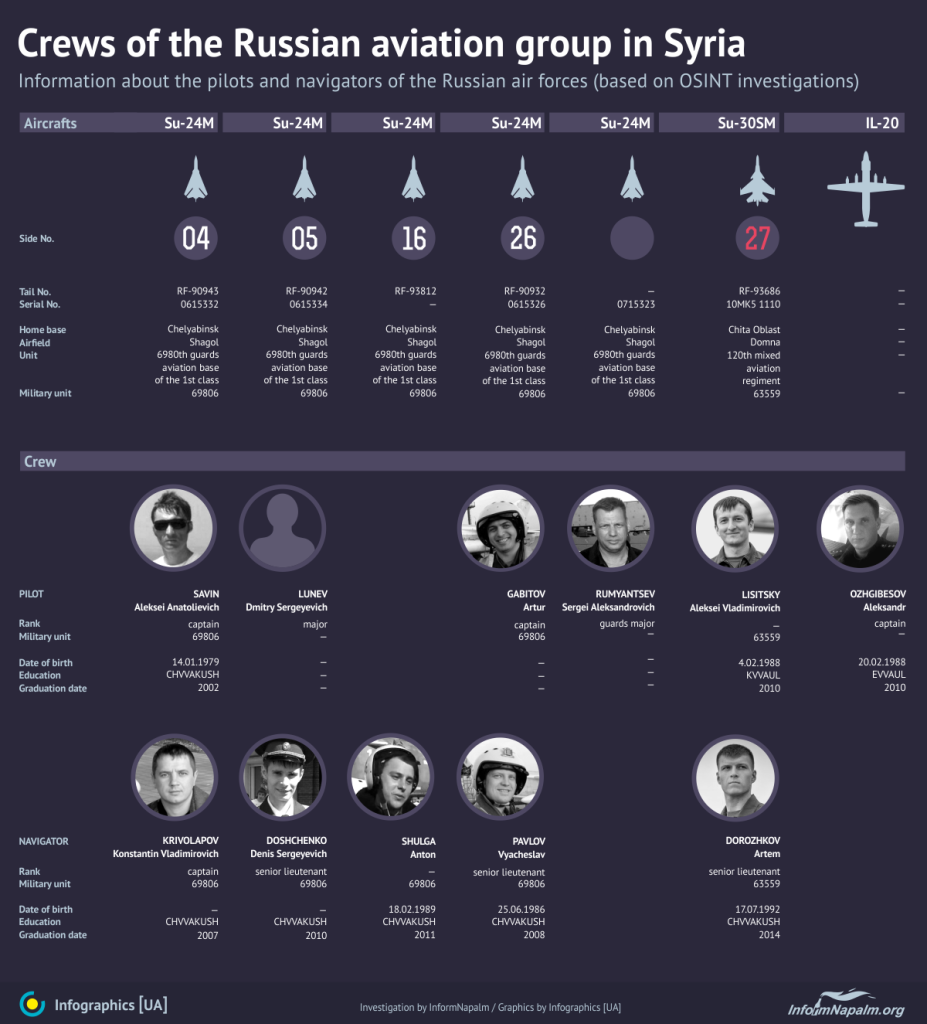 In the meantime, as the Russian Foreign Ministry “fought for the rights” of the Russian pilots, ground deployment of Russian troops gradually expanded. We spotted a heavy flamethrower system (TOS) Solntsepyok in Syria, which the world press called “a hellish weapon”.

Increasingly, in our searches on Syria we encountered representatives of ground forces of the Russian Federation: the 34th Brigade and its snipers showed up on our radars, marines from all over Russia were photographing their strongholds in various areas of Syria.

Gradually, the soldiers began to give away roadblocks and strongholds all throughout the Syrian territory. For us it was a new experience of searching through an unfamiliar terrain and without the knowledge of the local language. But we were helped by Twitter, Syrian activists and our experience of Donbas.

In every war, civilians are the first to suffer. InformNapalm was one of the first to write about the humanitarian catastrophe in Syria:

Tragedy in Zabadani – who will help them?

Also we started to give Syrian activists a say early on:

As a result, we were noticed by leading Russian propagandists:

“The main flow of information on the web of the Russian hits on mosques or on schools come from Kiev propagandists … Not observers, but journalists -” InformNapalm”. Well, their hatred is understandable. But with all this, there are such data, and these data are quite often objective, which is unfortunate” (Maxim Shevchenko in an Echo of Moscow radio broadcast, January 27, 2016).

Meanwhile, to ensure the supply line for the war, Russia had to use more ships – even an icebreaker from the Northern Fleet was involved. Then bulk carriers bought in Turkey were deployed for deliveries. As Russian bombs killed thousands of civilians, the sea routes became increasingly busy with the delivery of supplies to the Russian deployment in Syria. The maritime traffic to the base almost doubled. 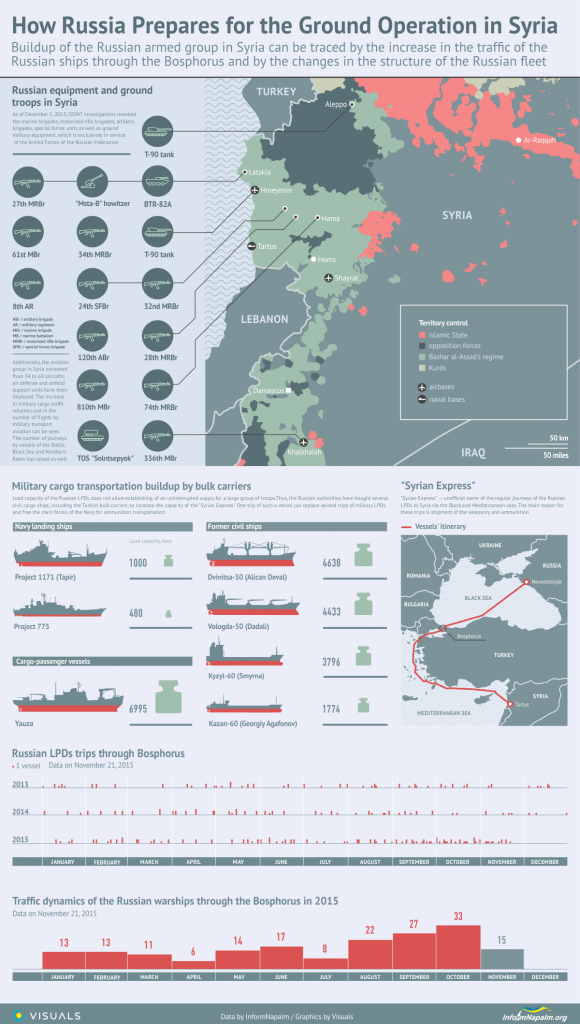 Russia doubled its deliveries by sea. It was especially exciting to encounter in Syria those who had fought in Donbas. Gradually, the servicemen of the Russian ground forces were throwing caution to the winds. Apparently, there was a severe shortage of political instructors and special military counterintelligence officers in the Russian Army.

Tankmen lovingly photographed their new T-90s and whole units of artillerists casually fell into the frame.

A year later, the web was flooded with hundreds of award photos of the personnel. It turned out that the Russian Ministry of Defense had issued a whole series of new medals exclusively for the Syrian war. Interestingly, tankmen, artillerists, medics and sappers were awarded combat decorations, whereas many of them had surfaced in Syria two months before the official start of the Russian military operation.

For the first anniversary of the start of the Russian military operation in Syria, we have prepared an extensive database of Russian pilots: 116 officers of the Russian Air Force who bombed Syrian cities have been made infamous by the InformNapalm infographics (6000 reposts on social networks in the first day alone (!)).

Impressive, isn’t it? To be continued …

This publication was prepared by Anton Pavlushko, an OSINT-expert of the InformNapalm international volunteer community.

No Responses to “InformNapalm Chronicles: a year of Russia destroying Syria”