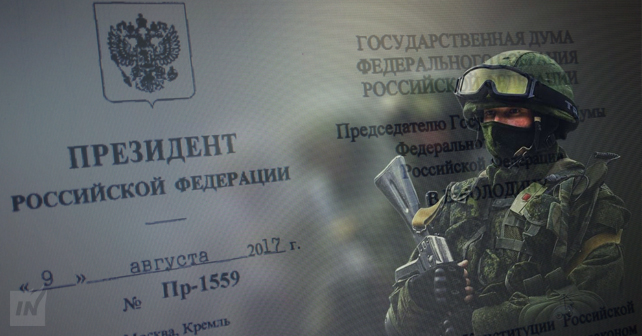 On August 10, 2017, the Russian President presented a protocol signed on November 2, 2016 for ratification to the Russian Duma.

It proposes amendments and additions to the agreement between Russia and Belarus on the common protection of the Union’s external borders. It refers to a previously signed agreement on airspace protection and the creation of regional air defense as of February 3, 2009 (Protocol No. 245943-7). The proposed amendments to the protocol and its additions provide Russia with a genuine carte blanche for military action in Belarus and the Union’s airspace protection.

The 2009 agreement was formulated with the goal definition for a common regional protection against threats toward Russia and Belarus. In particular, under so-called «periods of direct threat of aggression», e.g. in case of armed attacks against any of the parties in the region. The agreement entered into force in March 2012.

A protocol on amendments and additions to the agreement was signed in Minsk on November 2, 2016 at a meeting between the Defense Ministers of Russia and Belarus. At the same time, important decisions were taken in the field of defence. Alexander Lukashenko approved the protocol by a decree on March 10, 2017. In particular, the former word «air defense» was replaced by «air and space defense». This really reflects a change (2015) but it is not very interesting.

Period of aggravation of the military and political situation

Much more interesting is the proposal to replace the terms «critical periods of threat» and «periods of direct threat of an aggression» defined as «period of aggravation of the military political situation with threats of aggression against one of the parties».

The new concept, especially in regard to the time factor, during periods of direct threat, extends the possibility of full deployment of troops to the common regional air defense organization. In fact, this means Russia’s air and space defense on the territory of Belarus.

First, there may be no threat of an armed attack, but only the factor of a threat of aggression. In fact, any of the units in the Ukrainian armed forces that are located along the border with Russia and Belarus can be considered as a factor of potential threat.

Second, potential threats may range from statements from some political leaders to the establishment of a NATO military base on Ukrainian territory.

Third, the term «periods of direct threat» can be counted from the beginning of the Crimean occupation or the war in Donbass, as an aggression that worsened the situation in Ukraine, which has a border of more than a thousand kilometers with Belarus.

In this context, it should also be noted that Ukrainian issues have taken place in Belarus during the period 8 December 2013 (Maidan) and until 7 September 2014 (signing of the first Minsk Donbass agreement). During a limited episode, video conferences were conducted at the Belarusian airfields in Baranovichi and Bobruisk.

Changes to the Statement of Air Defense Systems

The protocol also contains amendments to the Statute of the Common Regional Air Defense Systems of Russia and Belarus. This means that the parties’ respective bodies, together with the commander of the common regional units, organize the interaction «between the Baltic fleet (air defense and ground forces) with the Russian and Belarussian air force».

The expression in this context, «the armed forces’ air and space defense» (next to Belarus and Ukraine) may indicate a desire to expand military action in the event of «an aggravating military or political situation».

Russia is currently carrying out major relocations of armoured support groups to the western boundaries before the Zapad-2017 Joint Strategic Operation, which will take place between 14 and 20 September, including in Belarus.

The Belarusian leadership should consider the consequences of «military cooperation» with a political regime that is upset by international sanctions and thus in need of «small victorious wars». Perhaps another Slavic country (or part of it) is about to «reunite with the motherland» carefully and methodically. A nice little reunion and a possible participation of Belarus in the Russian conflict with Ukraine.

In this regard, it is also worth noting that the post as commander of the Belarusian Air Force has been available for one month. The holder of the position over the last five years, General Major Oleg Dvigalev, was elected President of the Belarusian State Military Industrial Committee on July 18, 2017.

His name is included in our previous article Belarus: Russian Protectorate Or Sovereign State. It can be assumed that Dvigalev’s resignation, and the vacancy indicates, an attempt by Minsk, to silently try to «sabotage the cooperation». Something that could make Belarus a hostage in Kremlin’s foreign policy adventure.

More on the subject