Russian Contract Soldier from the 7th Base Fights as ‘DPR’ Militant 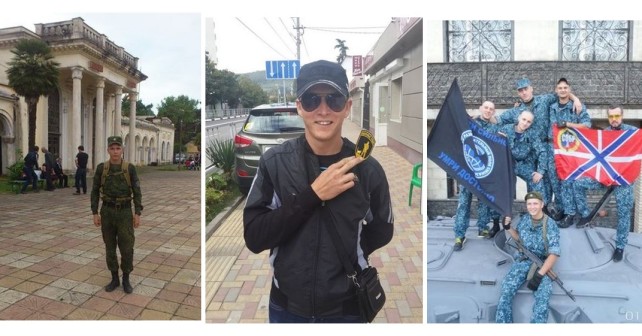 Several days ago the international volunteer team InformNapalm.org announced presentation of the information about presence of the contract servicemen from the 7th military base (military unit No. 09332, Gudauta, occupied Abkhazia, Georgia) in the ranks of the illegal armed formations in Donbas (please refer to ‘Massive Deployment of the Russian Troops And Equipment from the Occupied Abkhazia Is Registered’ article).

During the investigation of the social profiles, a Russian serviceman Mikhail Stolyarov was found (profile archive, photo album archive, friend list archive). Sifting and identifying his profile, and also with the informational support of the ‘Myrotvorets‘ center, we could find out several interesting details. The cover name ‘Stolyarov’ masks Neberekutya Mikhail Mikhailovich, born in Sevastopol on May 6, 1993. He is a contract serviceman of the Russian army from the Spring of 2013. He was called to active duty in Maykop, where after finishing basic military training he was assigned to an air defense division of the 7th occupation military base. In a year, in 2014, Neberekutya signed a contract – that was justified by the comments to the photo of his VKontakte profile.

Note: It is common practice in the Russian army (and so in the 7th base) to sign a contract after serving for 6-8 months. A typical contract lasts for 3 years and obliges a soldier to serve in the particular military unit. A contract serviceman gets around 45 thousand rubles (a conscript soldier in Abkhazia earns around 11 thousands) with possible extra payments – so called ‘field’ and ‘assignment’ extras, etc. Transfer to another military unit or resigning before the end of contract may result in problems (including punitive sanctions). Please check out the material from March 15, 2015 (in Russian): “The conscripts of the 7th military base are to sign contracts to be sent to Ukraine.“ 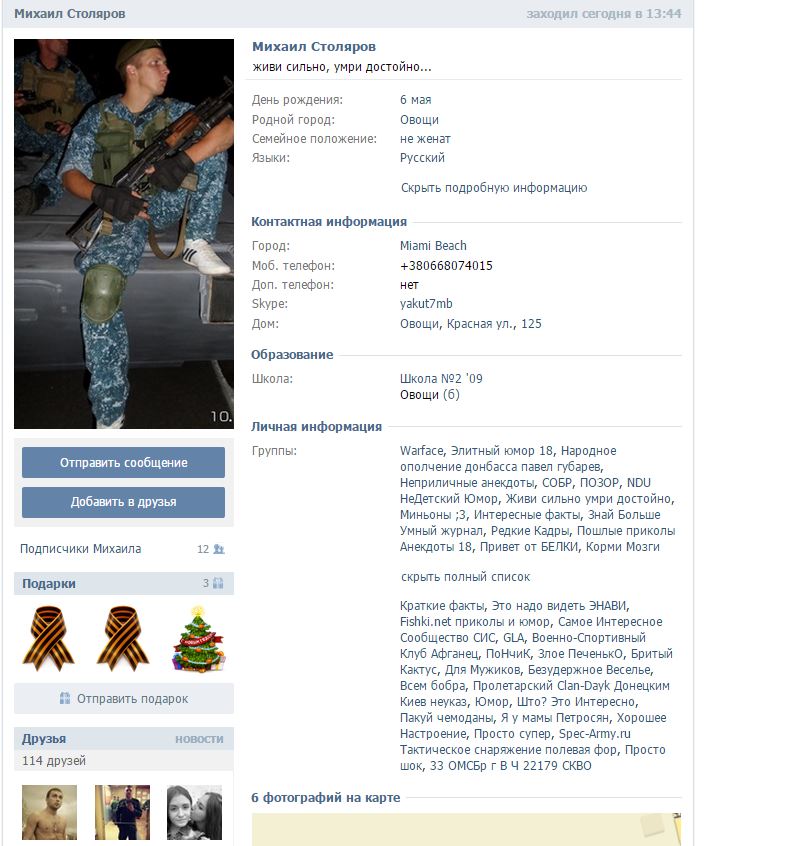 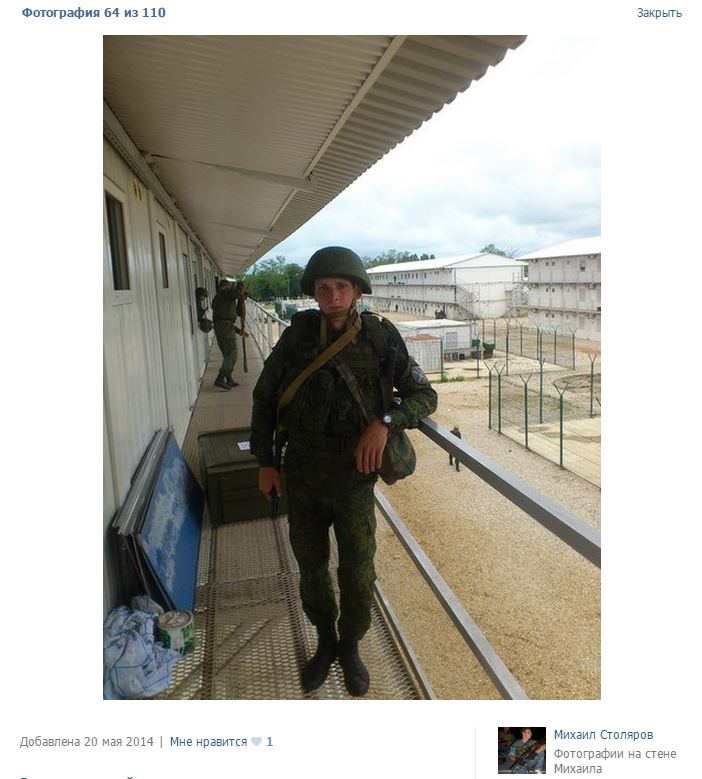 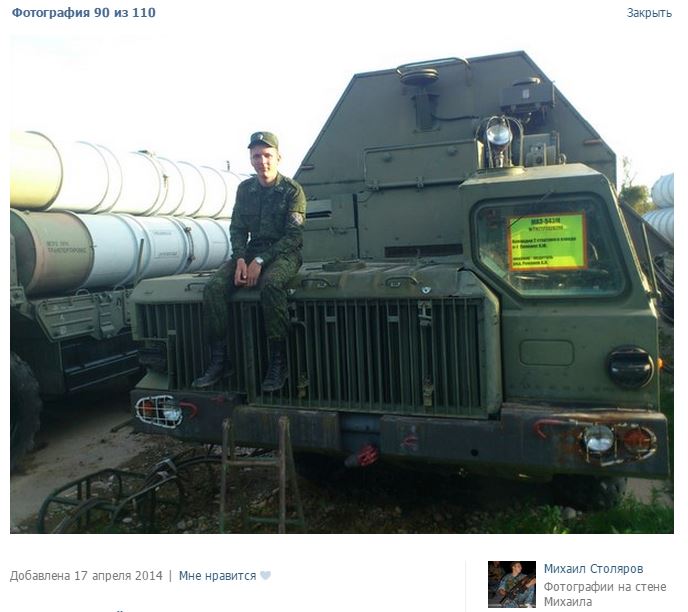 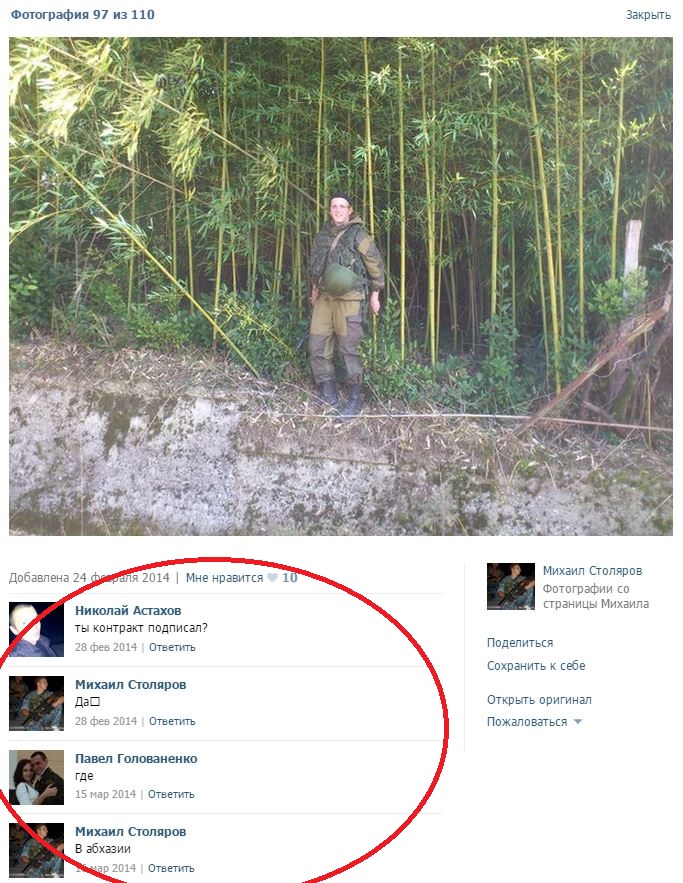 InformNapalm has repeatedly published articles about how the Russian contract soldiers become DPR/LPR militants ‘with a subtle motion of the hand‘ (as exemplified by the 7th base’s servicemen – “‘Cinderellas’ with Self-propelled Artillery Systems or How Russian Contract Servicemen are Posing as ‘Self-defence’”). Mikhail Neberekutya was not an exclusion – he still was a serviceman of the Russian army in December, 2014. That is proved by the medal ‘For battle honors’ he got, according to the order No. 809 from December 10, 2014, issued by the Minister of Defense and signed by the base’s commander, colonel Kosobokov. After a short break, starting from May, 2015, the Russian occupant M. Neberekutya appeared as a militant known as ‘Belka’ [squirrel] from the 5th ‘Oplot’ brigade of the ‘DPR forces’, and then in some ‘SOBR special police’. 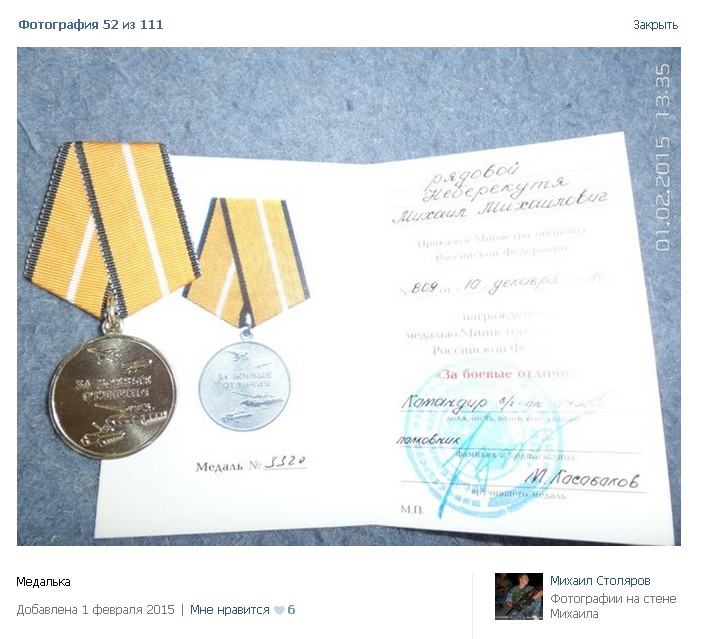 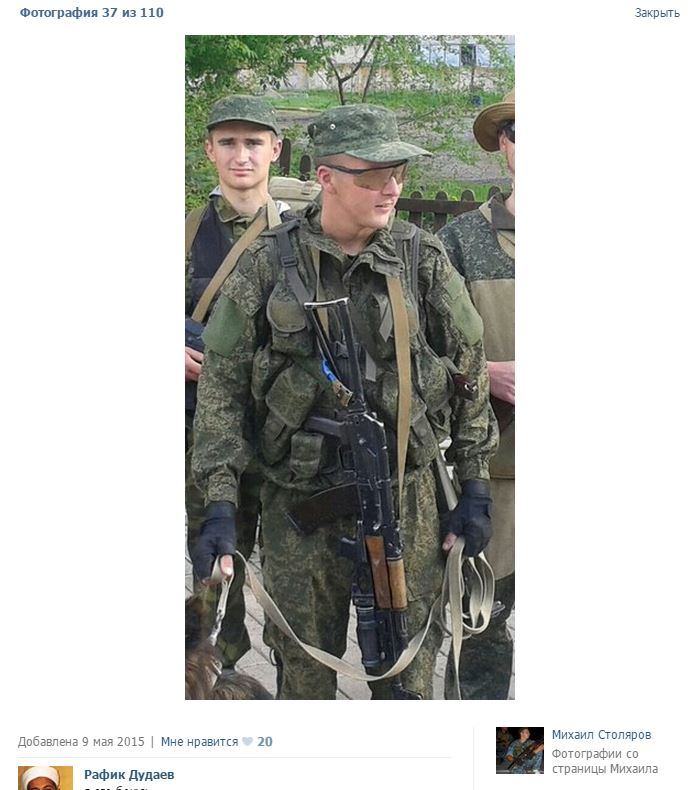 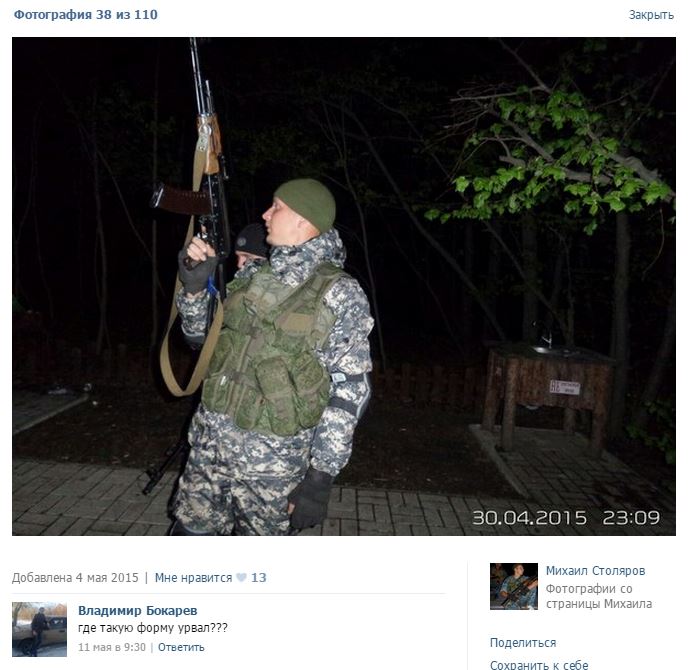 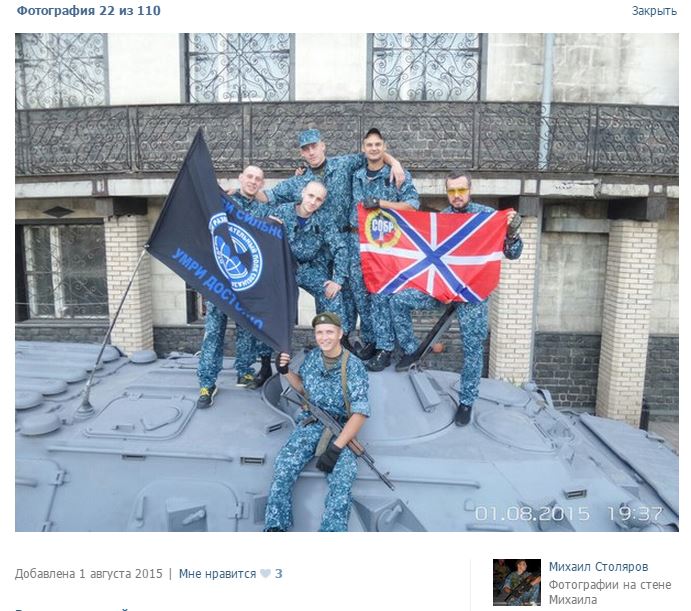 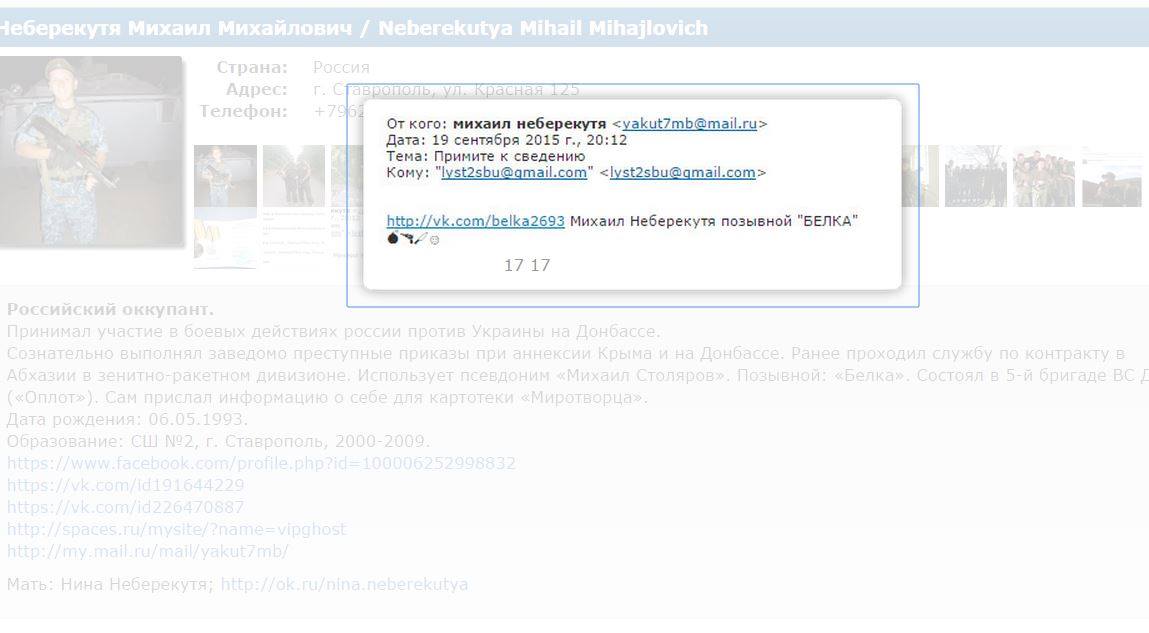 It should be noted that ‘Belka’-Neberekutya sent the information about himself to ‘Myrotvorets’ database on his own. He wanted the fame, and here it comes. Despite a number of manipulations with the intent to hide the personality, ‘Belka’ took a knock on his peacockery. Of course, neither him nor the Russian bots will admit he is a Russian soldier, but the fact remains – it is unlikely that the Russian contract serviceman with triple salary would barter the service in the Russian army for empty pockets and being a homeless militant in DPR/LPR. This is not the first time when a Russian contract soldier appears in the ranks of the ‘Novorossiya’ armed formations. By the new Russian army command’s approach, the military experts are assigned to those formations as coordinators, counselors, instructors, and junior commanders (crew commanders, etc) – as it was noticed regarding the servicemen of the Southern Military District units and GRU special forces. So, while the tactical group of the 7th base is being deployed to Rostov Oblast, its specialists in Donbas conduct reconnaissance survey and set the stage for a possible main forces arrival.