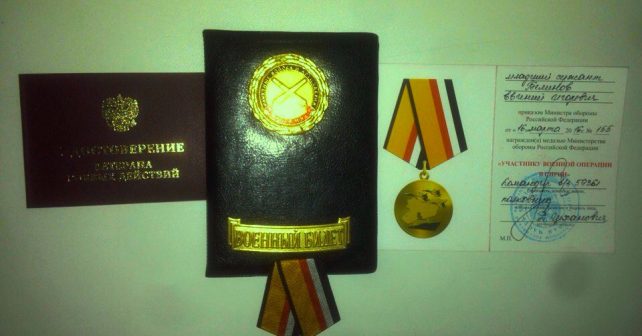 In this OSINT investigation, InformNapalm volunteer intelligence community exposes Russian servicemen from 120th Separate Artillery Brigade (military base 59361 of 41th Army, Central Military District, stationed in Yurga, Kemerovo Oblast) which at the beginning of 2016 were on a “Novorossia-Syria mission”. Russian contract soldiers themselves became our main source of information, as they could not hold their urge to boast of their military awards in public. We also used regional Russian media that, unlike the central media, who are not shying away from sharing such kind of news with their modest audiences.

It is worth reminding that in the end of 2016 InformNapalm published evidence of a “Ukrainian mission” of 120th Separate Artillery Brigade. The article pointed that artillerymen from 120th brigade besides the Rostov-Ukraine mission” were also spotted in Syria. In autumn 2015 Ukrainian military intelligence uncovered  initial information about deployment of the subunits of 120th Brigade to Syria. 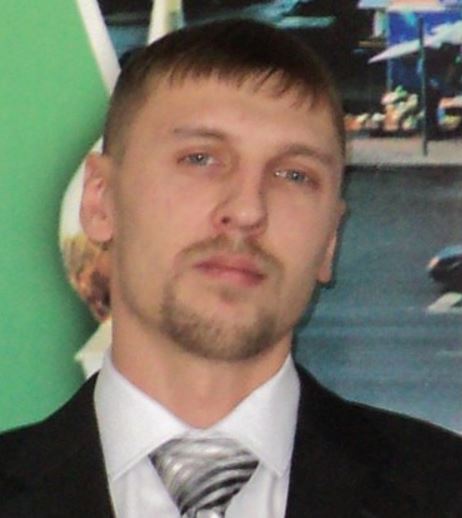 Turkanov does not keep in his profile any pictures revealing his military status and uses a nickname Shram (ed.: Russian for Scar). However, an urge to boast overcame caution. On January 17, 2017 Turkanov posted a video story made by the local TV Station in Beryozovsky showing him awarded for a military mission to Syria that lasted from January to April 2016. The same information was posted on the site of Berezovsky City hall on January 16, 2017. 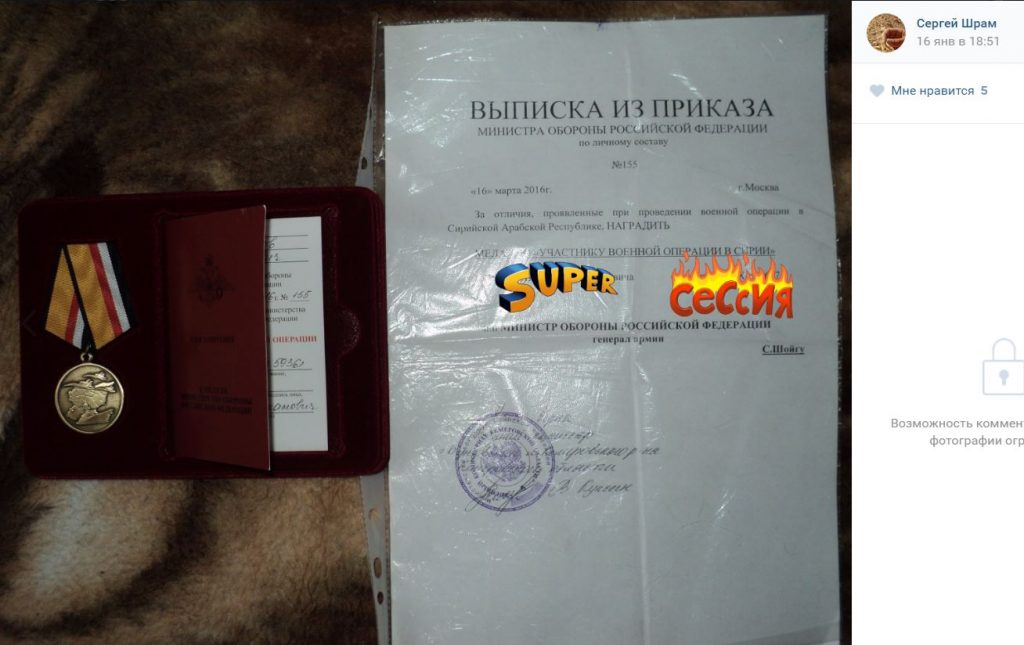 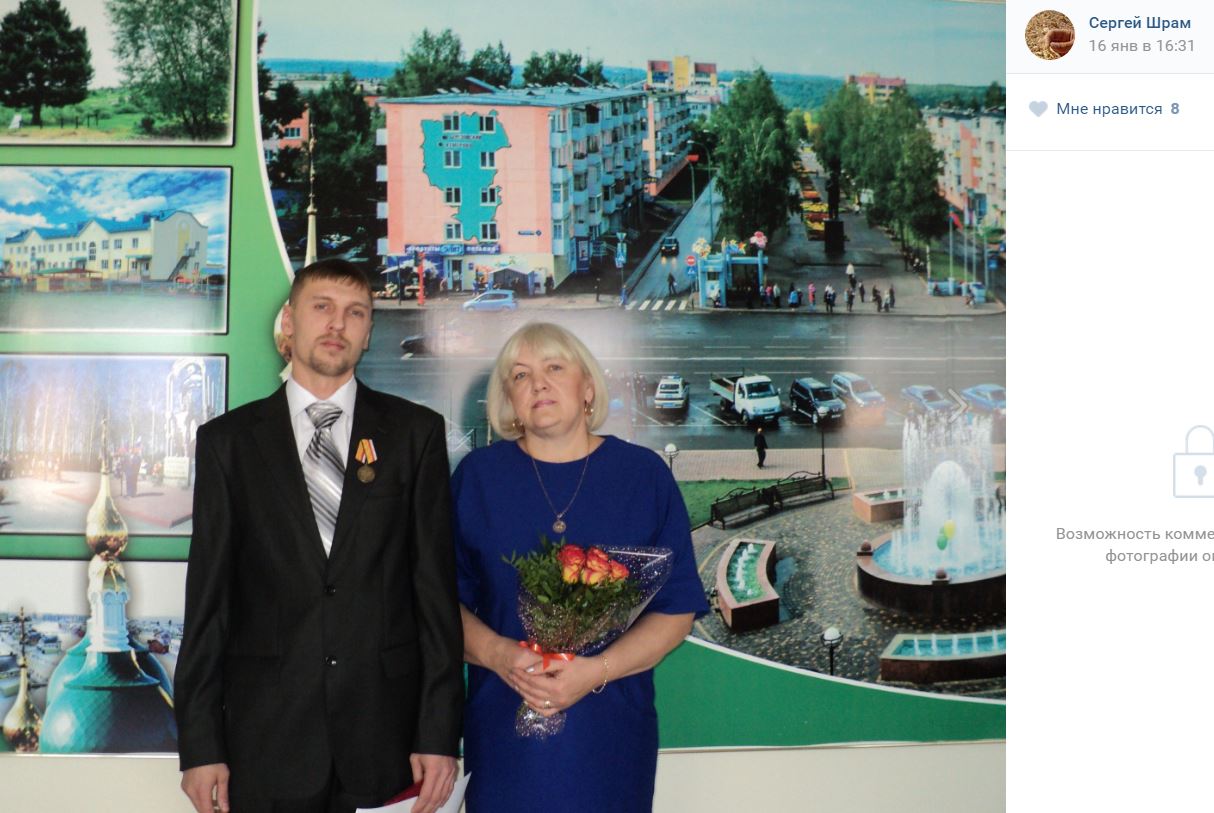 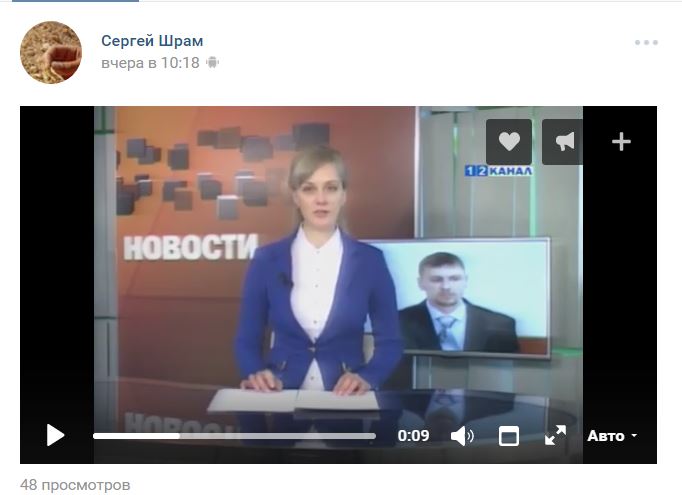 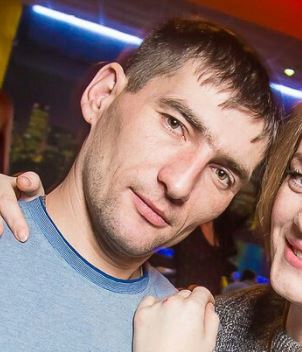 Just like Turkanov, Belinov too does not store pictures pointing to his military service in his album, but also succumbs to the boasting urge. 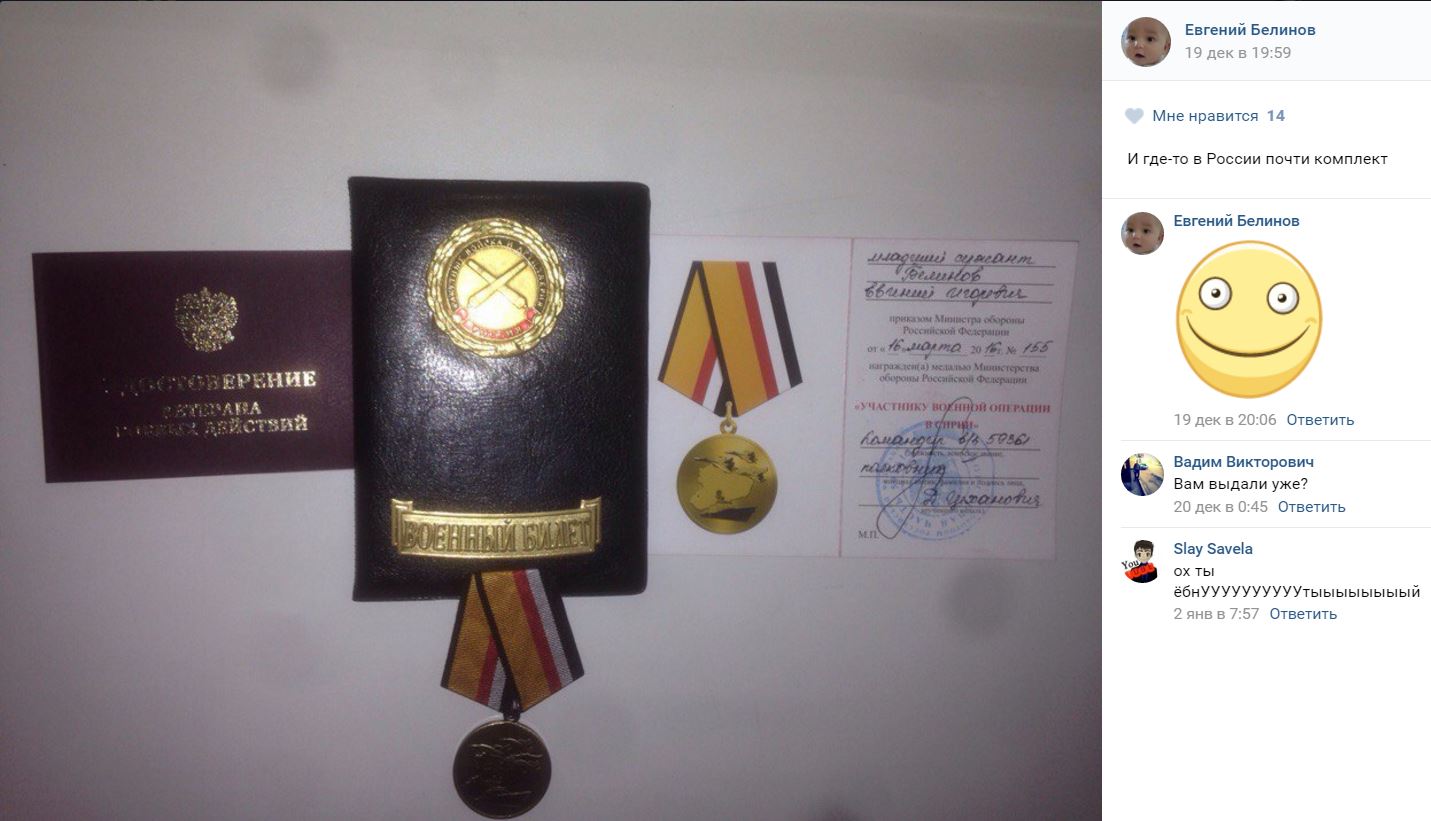 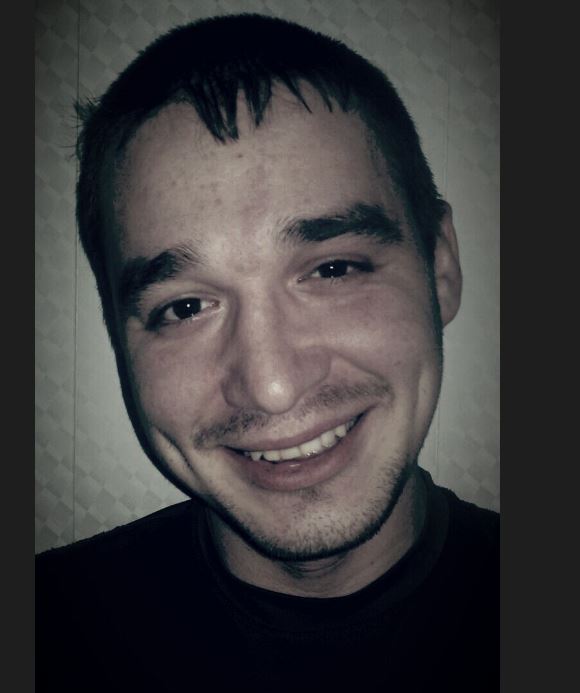 Awards: medal Participant of Military Operation in Syria. For some reason he covered his rank, kind of award, order number and military unit commander. But judging by the handwriting, identical with the award certificate of Belinov, we can tell that he was awarded by the same order of the Russian Ministry of Defense.

Several pictures from Saveliev’s photo album point to his service in the Russian Army including the time of the “Syrian mission”. 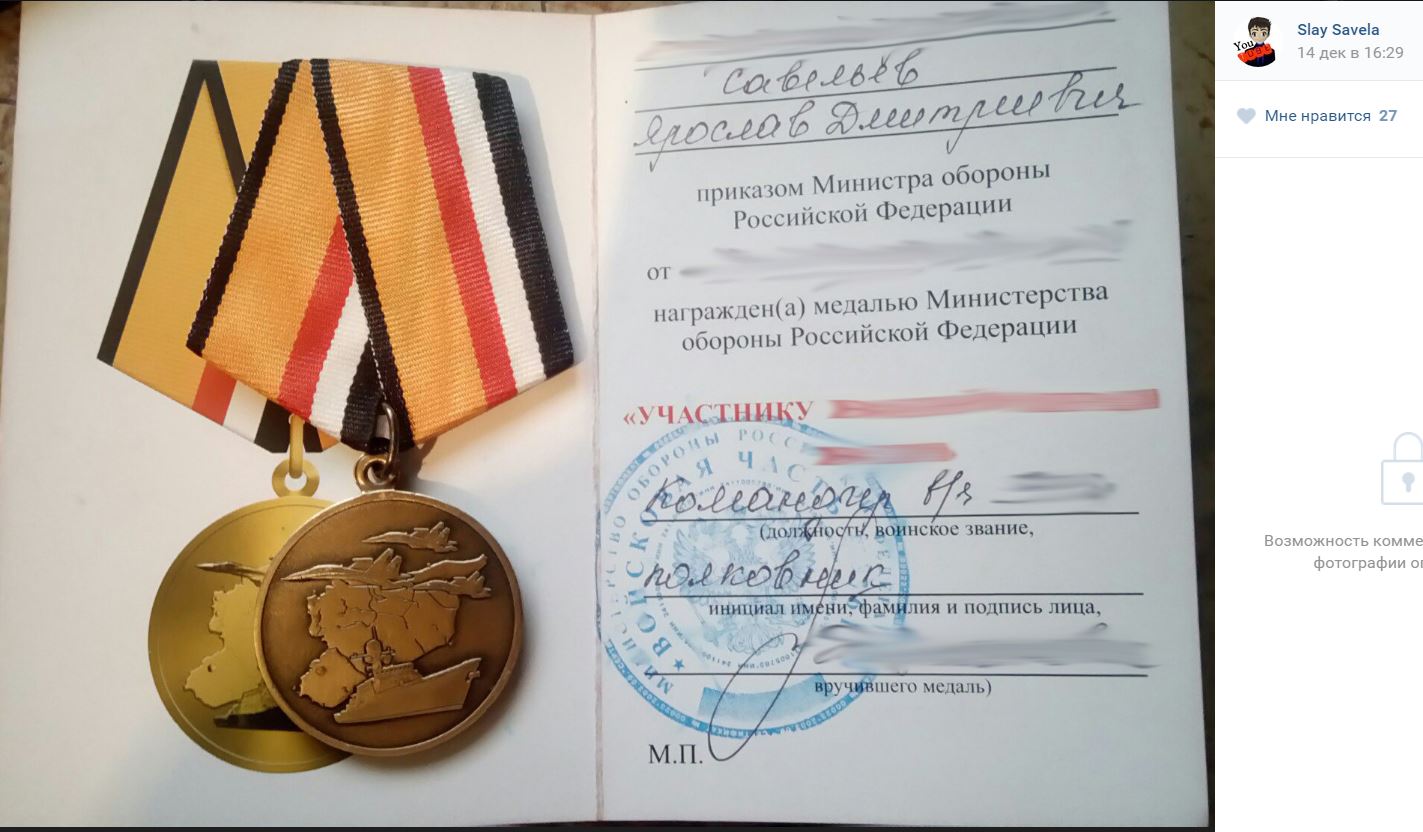 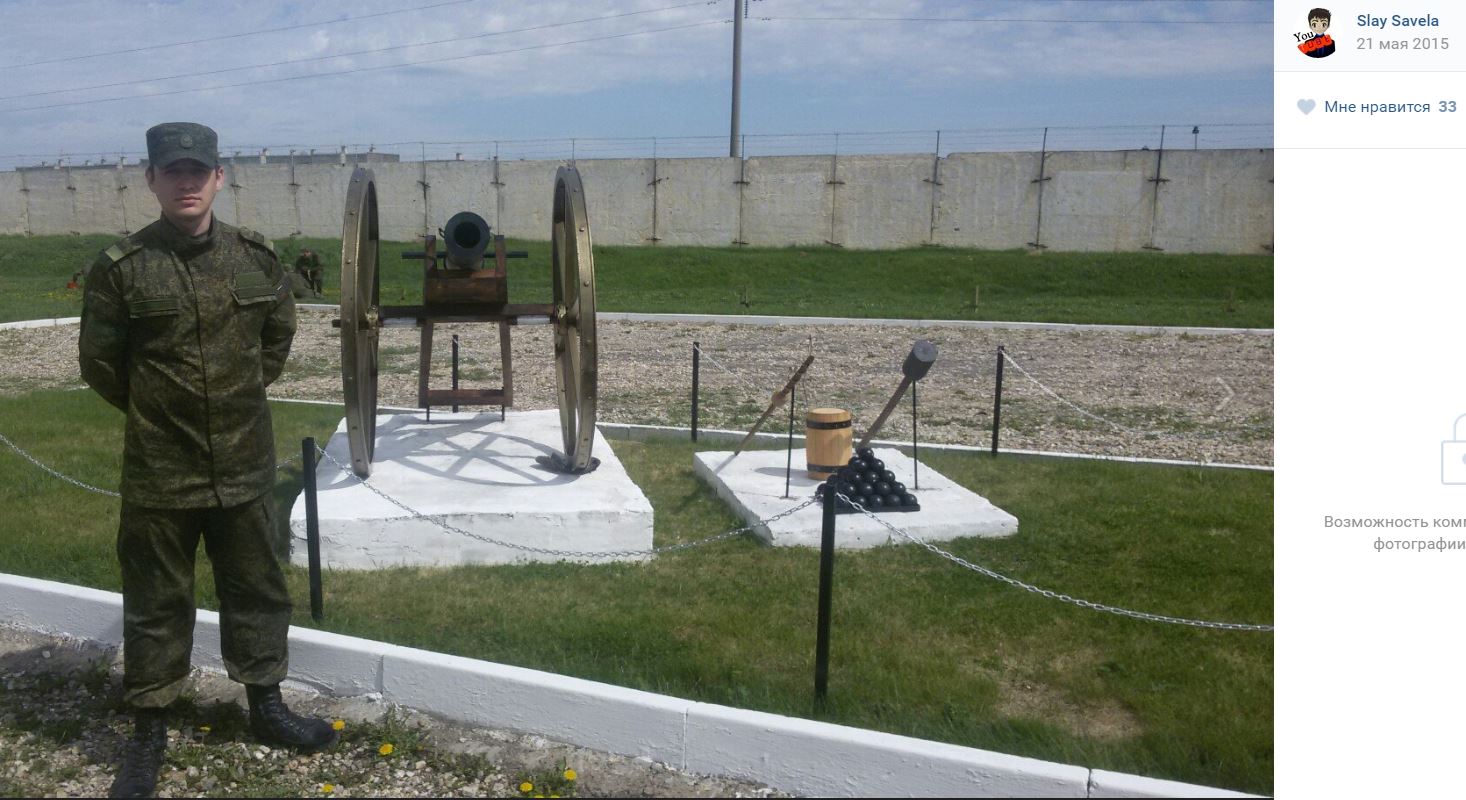 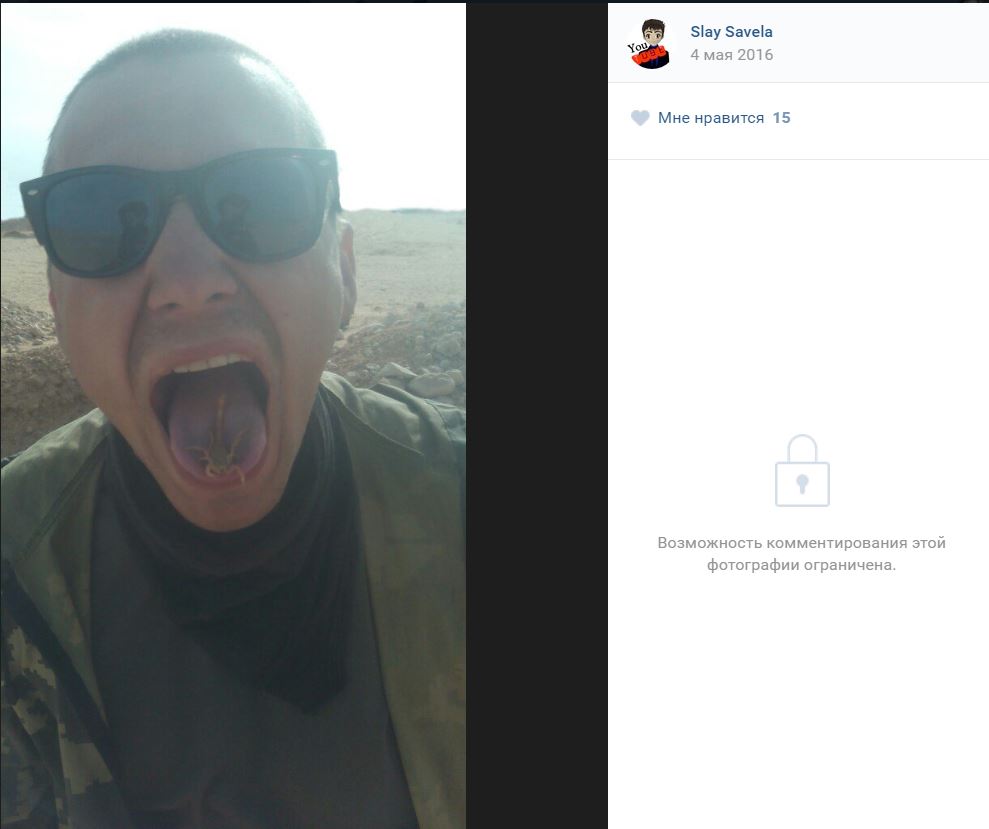 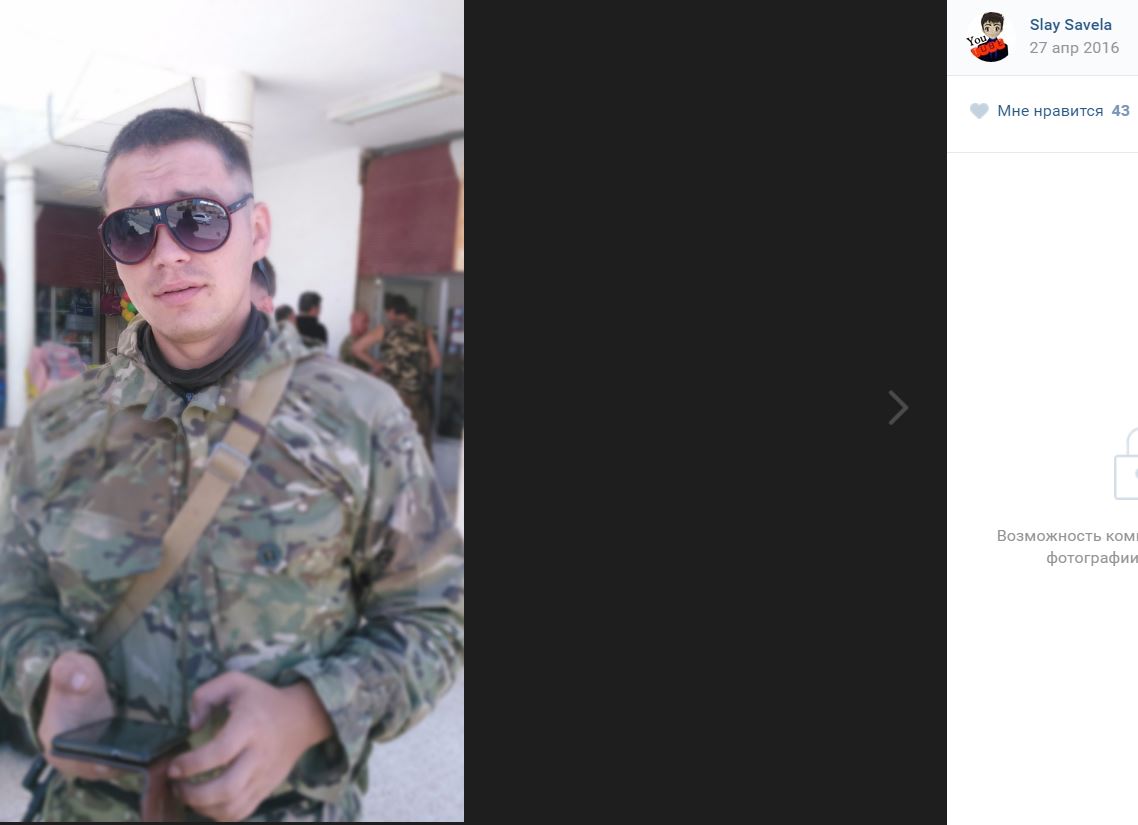 Three persons serving in the same artillery brigade are enough to make a conclusion about the involvement of the Russian 120th Artillery Brigade in a “mission in Syria” that was mentioned above. However , looking through their contacts on social networks we are finding dozens of other “they-are-not-theres”. For example Philip Gagarinov (archives profile, photos, contacts), who keeps his photos from the Middle East handy. 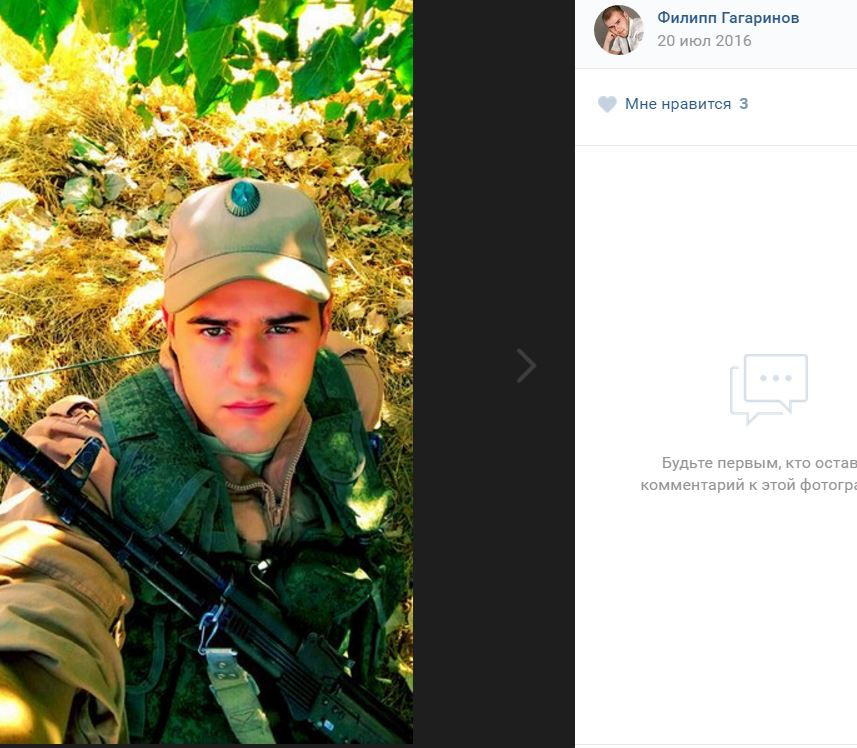 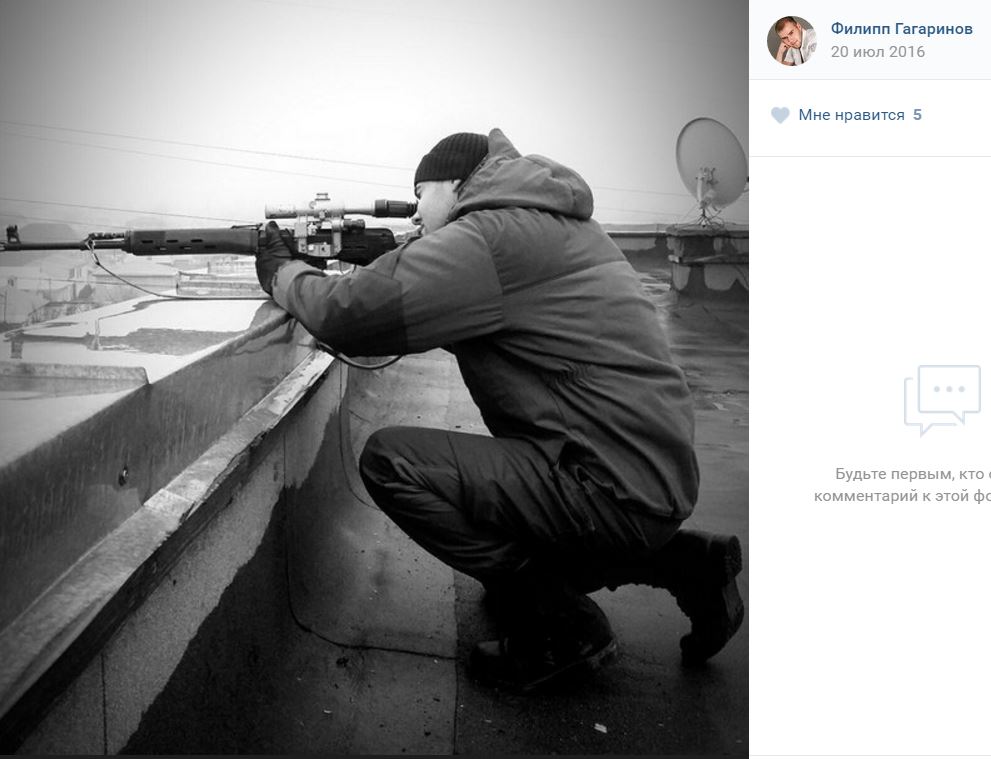 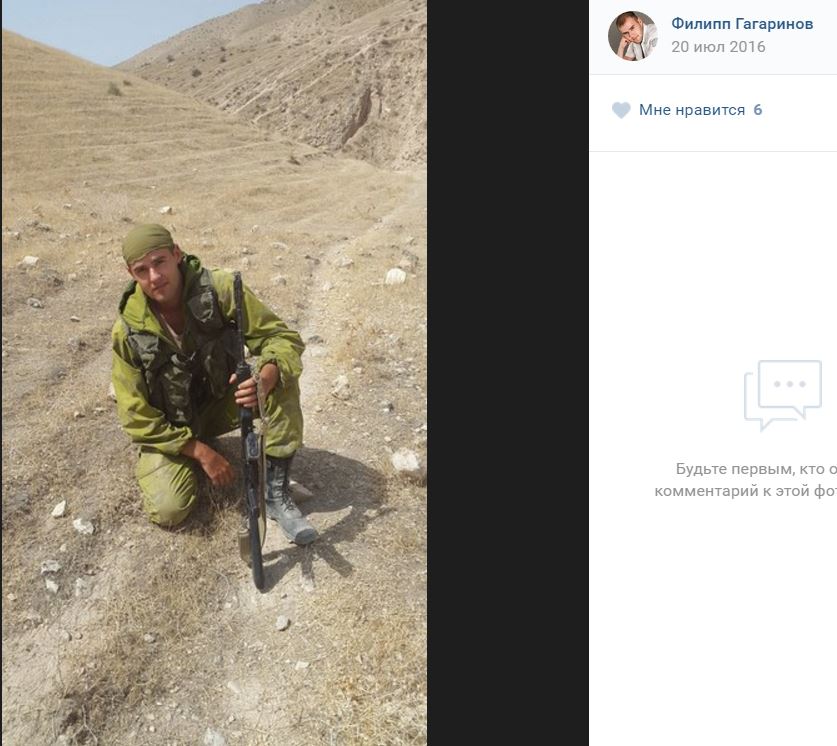 As it was mentioned before, based on observations of InformNapalm, the patterns of Syrian and Ukrainian missions are similar for the Russian Army and Fleet. The deployed units consist of task forces of the battalion or company level, staffed with contract soldiers. The same military units that got combat experience in missions in Donbas often get deployed to Syria. InformNapalm has already identified 16 military units of Russian Army and Fleet in Syria:

All these military units had already taken part in “Ukrainian missions”. We should also add to the mix special operations forces, units of Main Intelligence Directorate (GRU), airborne forces, the Air Force , military consultants and of course Russian private military companies (PMC’s) which were deployed to Syria long before other units. Ina addition to all the above, there were also secret reserves of the Russian intelligence agencies staffed by  militants, that had taken part in the Donbas fighting before Syria.

In December 2015 InformNapalm published evidence of a“Syrian mission” of the artillerymen of the Southern Military District, see East Is a Delicate Matter: 29 Servicemen from 291st Artillery Brigade in Syria..

120th Artillery Brigade is involved in 3 cases investigated by InformNapalm, both of Syrian and “Rostov-Ukraine missions. 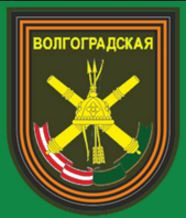 This publication was prepared on the basis of an OSINT-investigation by InformNapalm volunteer intelligence community. Author: Irakli Komakhidze , translated by Eugenia Zlamanuk , edited by Artem Velichko

No Responses to “Syrian mission of Russian 120th Artillery Brigade”