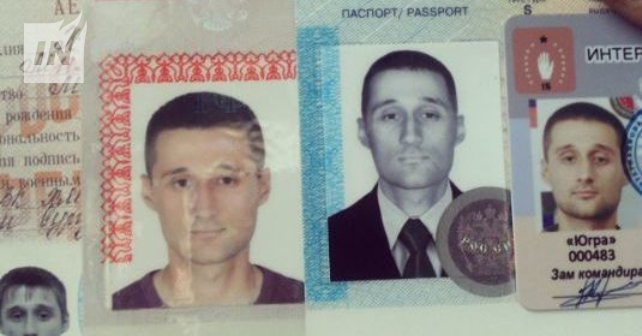 International volunteer community InformNapalm has been working for more than 2 years. During this time we have identified dozens of Russian units, military groups, and individuals representing the Russian army in the war in the Donbas. Many of them were spotted in the Donbas in the critical period of the summer-fall 2014, when the Russian military command had thrown significant forces to turn the tide of battle in their favor.
Having left their tracks all over the region, after the shelling from across the border and the invasion of Ukrainian territory by the tactical groups in July-August 2014, Russian side was forced to sign the first Minsk accord under pressure of the international community. Yet, even though it had lost the opportunity for open military presence branded as “a peacekeeping mission”, Russia managed to occupy a fairly large portion of the Donbas. Immediately after that the Russian military command rushed to legalize their armed groups in Luhansk and Donetsk regions, forming army corps of the so-called Donetsk and Luhansk People’s Republics. These corps were manned based on a mixed approach: overt use of the local “rebels” and Russian “volunteers” and covert employment of Russian military personnel – officers and contract soldiers (junior commanders and specialists) – who had the task to form, combat train and use illegal armed groups in battles.
Illegal armed groups of so-called “Novorossiya” can boast of many Russian units and individual soldiers, specifically: 19th Motorized Rifle Brigade (Vladikavkaz, North Ossetia), 18th Motorized Rifle Brigade (Kalinovskaya, Chechnya), 136th Motorized Rifle Brigade (Buynaksk, Dagestan), 7th military base, see 1 and 2 (Gudauta, occupied Abkhazia, Georgia), 205th Motorized Rifle Brigade (Budennovsk, Stavropol Krai), 8th Motorized Rifle Brigade (Borzoy, Chechnya), 291st Artillery Brigade (Troitskaya, Ingushetia) from the Southern Military District; 74th Motorized Rifle Brigade (Yugra, Kemerovo Oblast), 23rd Motorized Infantry Brigade (Samara), 15th Motorized Rifle Brigade of “Peacekeeping” Forces (Roshinsky garrison, Samara Oblast), 21st Motorized Rifle Brigade (Orenburg), 31st Separate Airborne Brigade of the Airborne Forces (Ulyanovsk) from the Central Military District. Units of the Russian National Guard (forces of the Russian Ministry of Internal Affairs) and other security and law enforcement departments were also engaged.
This list, however, does not include the servicemen from the 28th Motorized Rifle Brigade of Yekaterinburg operating in illegal armed groups, despite the fact that this particular unit had repeatedly appeared on our radar in other circumstances. Now it’s time to expose the participation of soldiers from this brigade in the militant groups of “Novorossiya”.
The record of Michael Khvorostyanov has been residing in “Purgatory” online database of Myrotvorets center since August 2015. There he is cattegorized as “Russian mercenary, militant from the illegal armed group “Pyatnashka” (this is something he bragged about on his VK page). While there is a lot of useful information on him, the record lacks even a slightest hint about his link to any government organization of the Russian Federation. Yet, our in-depth OSINT (open-source intelligence) research let us collect more details about Khvorostyanov, and, what is more important, prove his service in the Russian Armed Forces. 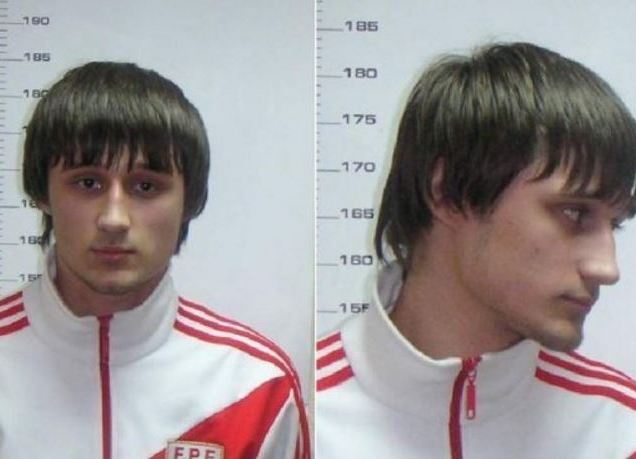 Michael Khvorostyanov was drafted for military service at the end of 2012. After several months of service in the 28th Motorized Rifle Brigade, he was attached to the 201st military base in Tajikistan, where, while still a conscript, shortly before demobilization he signed a 3-year contract with the Ministry of Defense of Russia.
NB: The 201st Russian military base is manned with the personnel from the Central Military District units of the Russian Armed Forces. Draftee soldiers and sergeants are sent to Tajikistan after serving 4-5 month in the units of the Central Military District, or immediately after training in operational training unit. Similar scenario works for the 102nd Russian military base in Armenia, where the command sends conscript soldiers from the Southern Military district, and also graduates of operational training units from various regions of Russia. In about a month the conscripts are sent back to their units where they serve until demobilization. 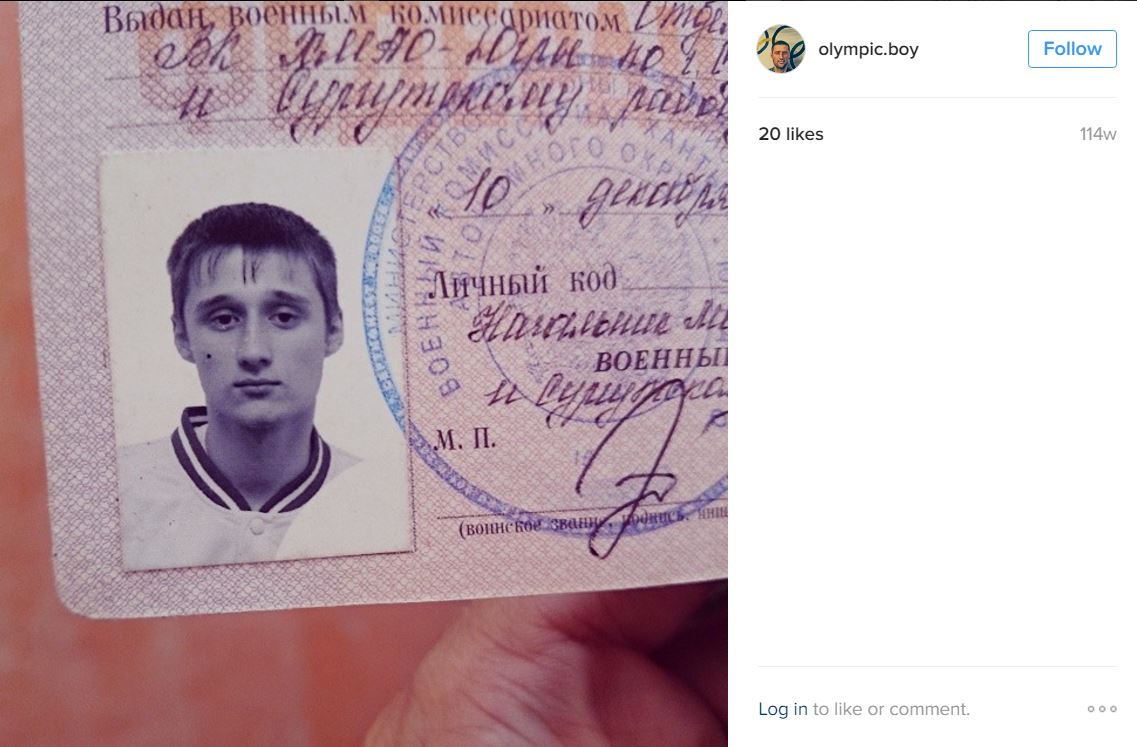 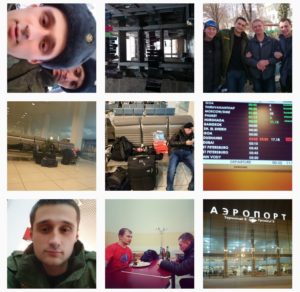 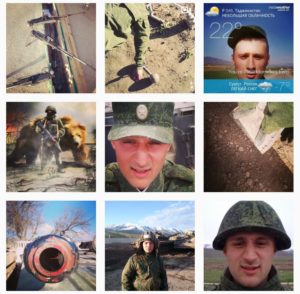 While in Tajikistan, already as a contract soldier, Khvorostyanov boasted of his insignia of the “polite people” (Russian occupation forces in Crimea), a gift from his colleagues who came from “Ukrainian business trip”. Most likely, Russian propaganda, brainwashing by political commissars, stories of colleagues who came from the Donbas, and desire to earn a triple salary, all played the role in convincing Khvorostyanov to go. 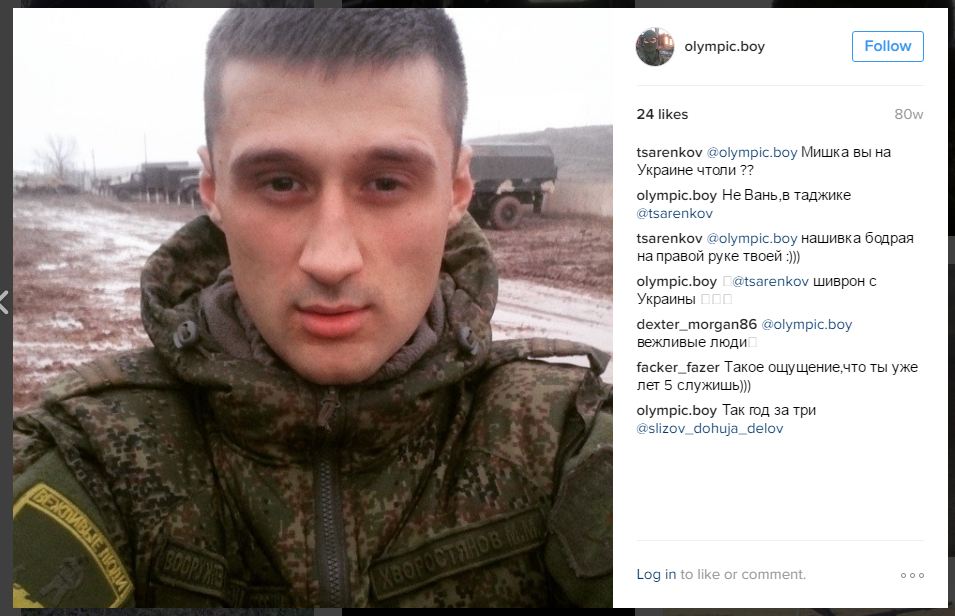 Michael Khvorostyanov got to Donbas on June 12, 2015. Having stayed but a short time at the base in Donetsk as a member of the illegal armed group “Pyatnashka” of the so-called Republican Guard of DPR, he was sent to the war zone in Marinka area. When we look at Khvorostyanov’s Instagram correspondence with his friends we can learn many curious things: that he stayed in the Donbas of his free will, that “Czechs and Georgians fight for Ukrops (Ukrainians), and they fire even at the regular (i.e. Russian) military”.
viktorius__86 Micah, did you go voluntarily, or were you volunteered?
olympic.boy@ viktorius__86 voluntarily of course
[email protected] artur_0086 bro, there are Czechs and Georgians there
tsarenkov@ olympic.boy Czechs and Georgians fight for Ukrops?
[email protected] Vanya Yeah Vanya, they even open fire at the regulars who decide to retreat 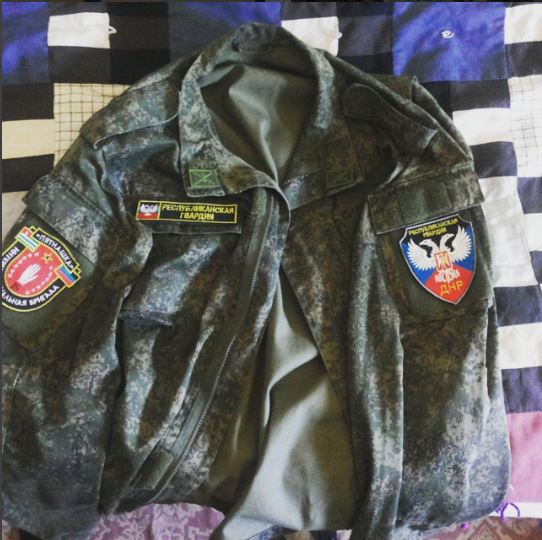 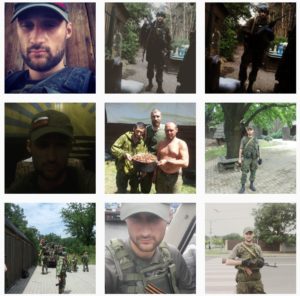 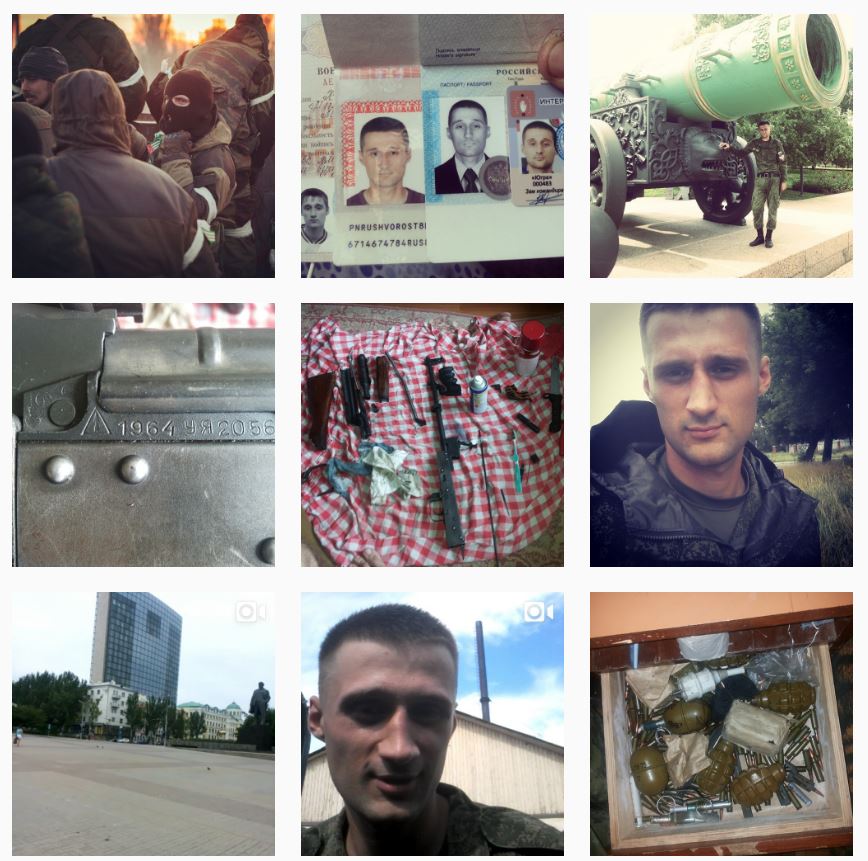 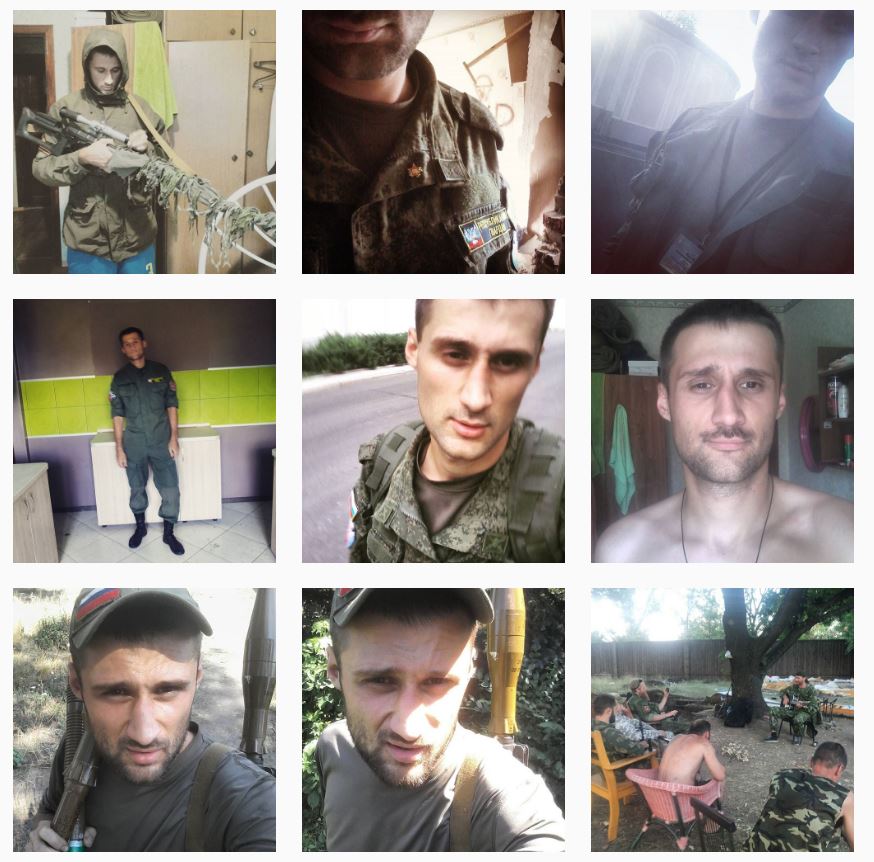 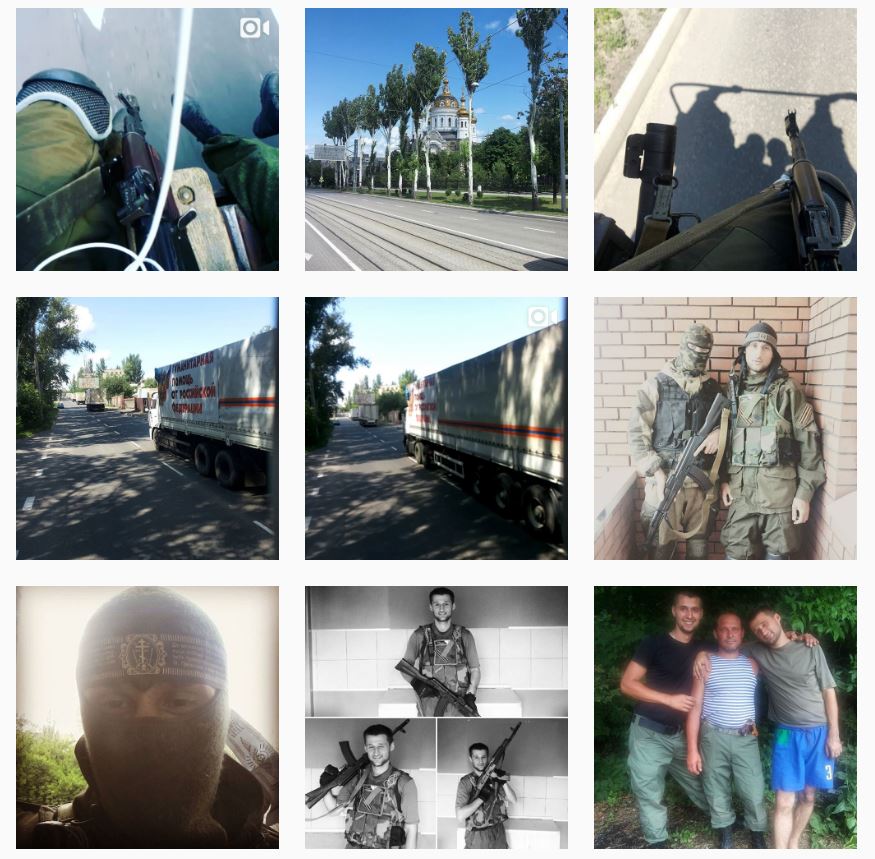 The Donbas career of Michael Hvorostyanov did not last long. A month after his arrival, on July 19, 2015, he got wounded in the abdomen, chest, and shoulder near Marinka. It is noteworthy that during his period of treatment and rehabilitation in Donbas, Khvorostyanov managed to become a hero-star of the “Novorossiya” video propaganda:
– Ugra, a heavily wounded soldier of the “Pyatnashka” International Brigade, July 30 2015: https://youtu.be/l6mlOz5oW0U
– Ugra, a fighter of “Pyatnashka”, tells the story of the battle for Marinka where he was seriously wounded on August 4, 2015: https://youtu.be/tRsUHUpgwHY 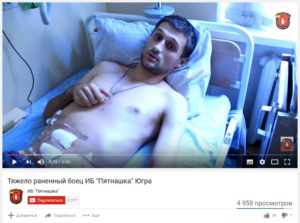 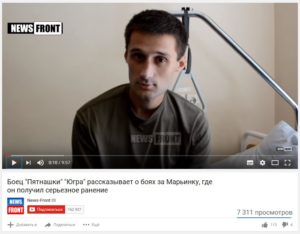 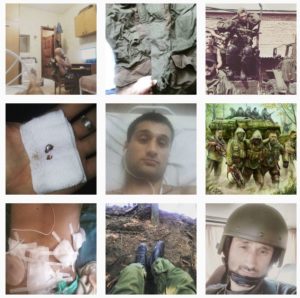 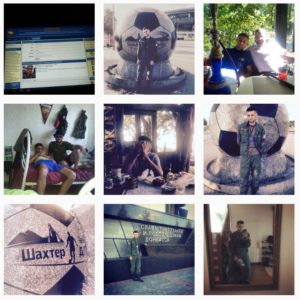 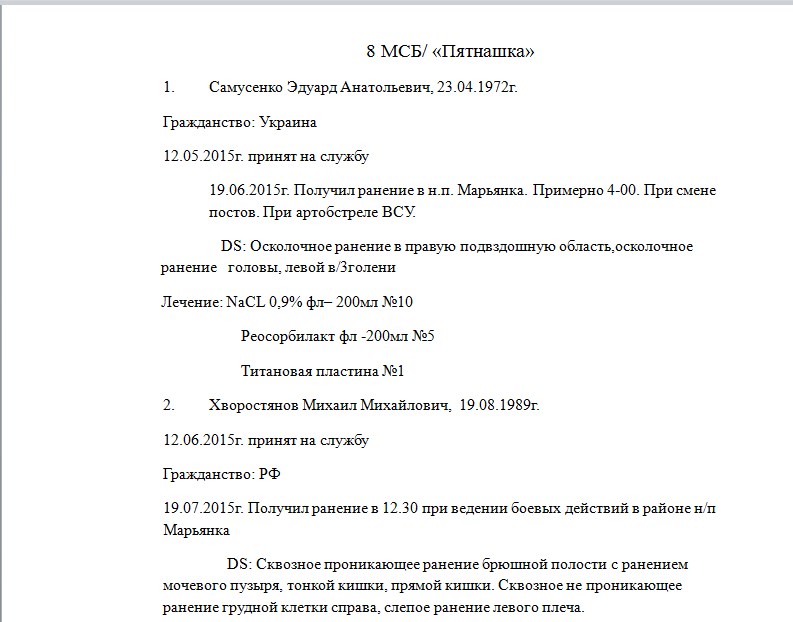 After the first course of treatment and rehabilitation, taking into account that Khvorostyanov had already been “exposed” by Russian propagandists as a “volunteer from Pyatnashka”, he was rewarded with a consolation prize. In October 2015 Khvorostyanov was sent to the 1st Congress of the “Union of Donbas volunteers”, where he was honored with the chance to stand in the photo with the “legendary” spetznaz soldier “Gurza”. 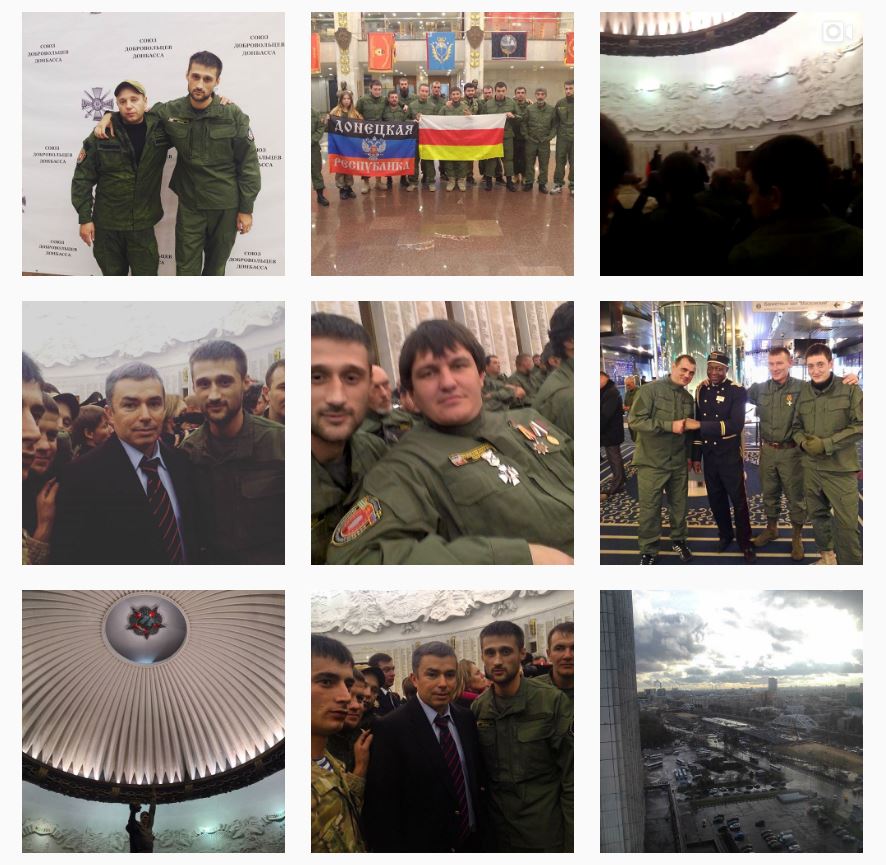 After that, presumably in November-December 2015, Khvorostyanov required additional medical rehabilitation, which he received in the 451st Military Hospital of Defense Ministry of the Russian Federation at the 201st military base in Tajikistan, as evidenced by this video (https://www.instagram.com/p/BD9-32hpCAm/?taken-by=olympic.boy) with his own commentary: olympic.boy 451st military hospital. These facts once again confirm that Khvorostyanov, while being a militant in “Pyatnashka” in the Donbas, was simultaneously listed among the personnel of the 201st military base of the Russian Defense Ministry in Tajikistan, since his full medical rehabilitation was carried out by the Russian military hospital in Dushanbe. 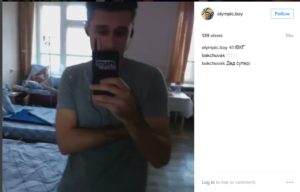 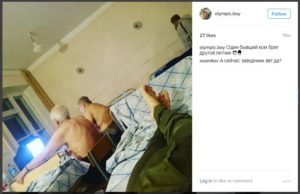 Armed Forces of the Russian Federation. Career progress of the Donbas veteran: from artillery to reconnaissance

As of January 19, 2016, Michael Khvorostyanov was photographed in the uniform of the Russian Armed Forces, with the sleeve insignia of the 201st military base. A month later, he was already posing with the insignia of the Central Military District – those are worn by the soldiers of the 28th Motorized Rifle Brigade from Yekaterinburg. It is also worth to single out a photo with an extract from the official character report of Khvorostyanov, that, most likely, was written shortly after his transfer from the 201st military base back to the 28th brigade. In this report Junior Sergeant Michael Khvorostyanov appears to hold a position of a control platoon scout of the 2nd self-propelled howitzer artillery battalion, unit 61423 (the same 28th Separate Motorized Rifle Brigade). 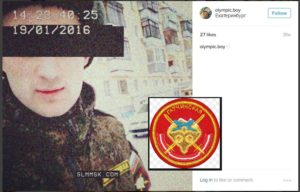 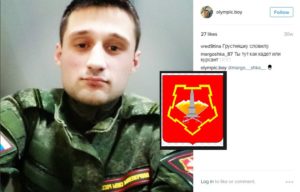 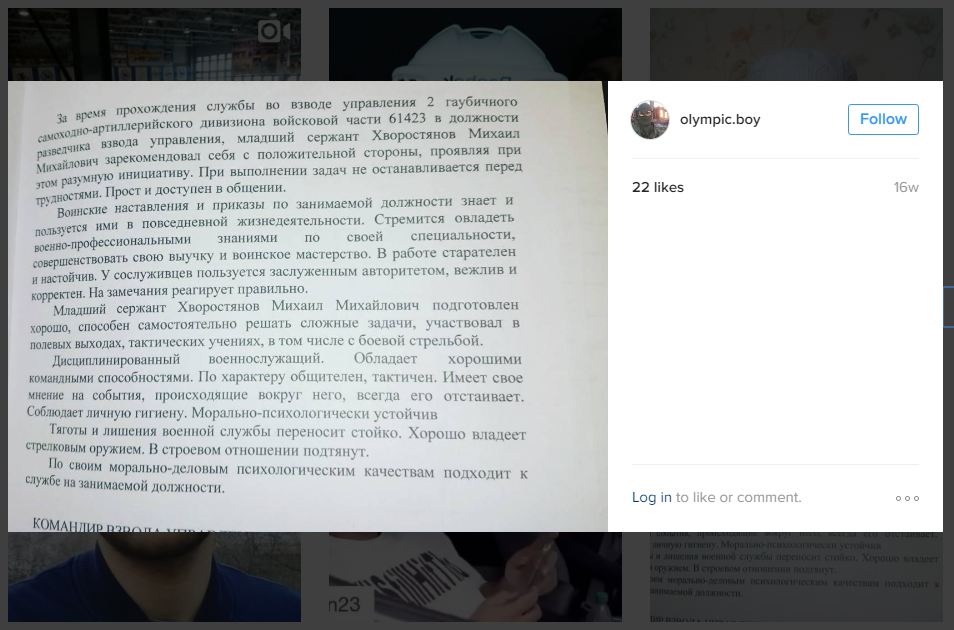 As was already mentioned above, Khvorostyanov signed a 3-year contract to serve in the Russian Armed Forces, which expires in the fall of 2016. This is also evidenced by a five-month-old comment from Khvorostyanov.
Judging by the latest series of photographs, as of July 2016 Mikhail Khvorostyanov was transferred from the artillery to a reconnaissance battalion. In particular, he exposed his sleeve patch of the military intelligence and was wearing a striped t-shirt – notable elements of the Russian Armed Forces reconnaissance division. In addition to photos with the abovementioned symbols, there is a remarkable video (https://www.instagram.com/p/BH098_OgUsv/?taken-by=olympic.boy), shot and uploaded by Khvorostyanov during the same period. In the video we can see a group of soldiers with the same military intelligence insignia on the parade ground of the 28th Brigade in Yekaterinburg.
It is entirely possible that Khvorostyanov got transferred to a new structural division of his motorized brigade – an airborne reconnaissance company of the reconnaissance battalion. InformNapalm just recently reported on the formation of these units in motorized rifle brigades of the Russian Armed Forces (see Hawkish Course: New Airborne Reconnaissance Companies for the Russian Infantry) 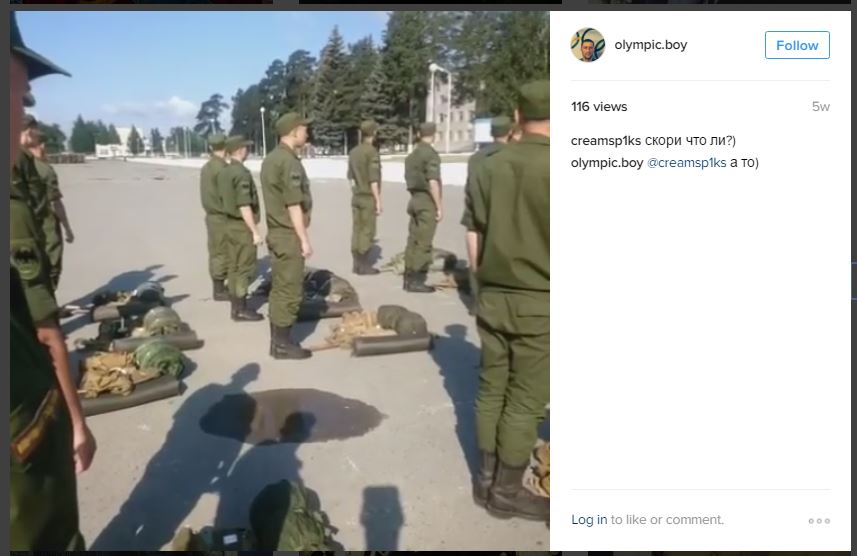 The new role of Michael Khvorostyanov as a scout is quite understandable: it was his bonus, but also an opportunity to use Khvorostyanov as instructor to teach recruits. Khvorostyanov’s instructor role is evidenced by a number of recent photos from classes, including tactics classes with rangefinder binoculars, combat engineering, and firearms training, where we can see that Khvorostyanov acts as a mentor. 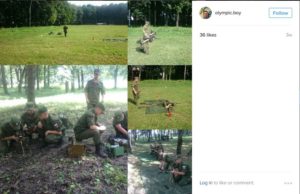 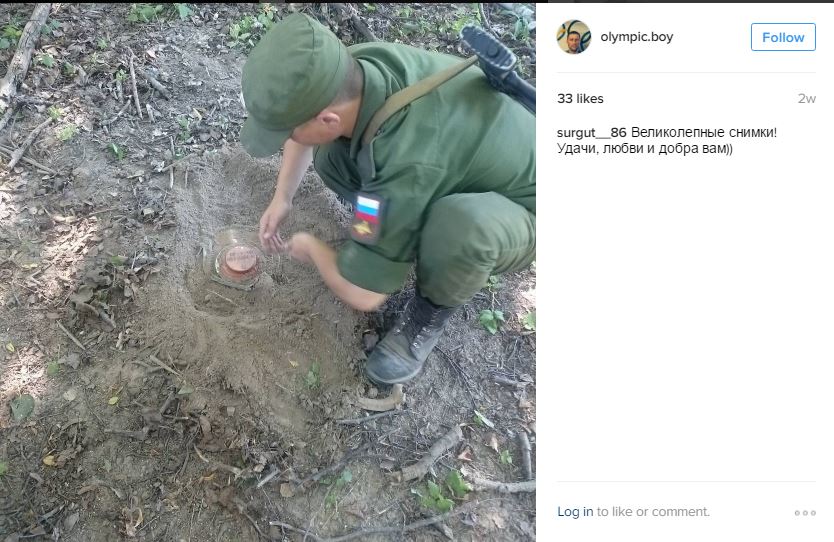 We would like to remind you that this is not the first time when Russian servicemen from the 201st military base were spotted in the Donbas. In the spring of 2016 we received a set of data from an independent hacker alliance, and on the basis of these data we identified Yaroslav Volkov, contract serviceman of the 201st military base in Tajikistan, see Another Russian soldier on active duty in Donbas, Ukrainian hackers provide more proofs.
The 28th Separate Motorized Rifle Brigade of the Russian Armed Forces has appeared on our radars many times. We saw soldiers from the tactical groups of this brigade in “Rostov-Ukraine business trips”, “Novorossiysk-Syria business trips”, and also when individual soldiers from this brigade were seen in the Donbas. In fact, InformNapalm was the first outlet that gave a coverage of the relocation of the 28th Motorized Rifle Brigade from Yekaterinburg to Bryansk Oblast.
28th Motorized Rifle Brigade on the Ukrainian heading
 The return of the 28th Motorized Rifle Brigade from Yekaterinburg to Rostov Oblast to join back invasion forces [RUS], November 13, 2014
 The tracks Russian invading forces leave on December snow [RUS], December 8, 2014
 28th Brigade from Yekaterinburg on “Exercises” in Rostov Oblast Sometimes Mourns Its Dead, January 22, 2015
 Stage Play “Time to go home” on the rails and in the airport in Belgorod [RUS], March 12, 2015
 A Medal for Killing Ukrainians, 12/15/2015
 Evidence of the ‘Ukrainian Assignment’ of the 28th Brigade from Yekaterinburg, 03/19/2016
 Russian Federation Hurries to Build Military Bases Near the Ukrainian Border. Part 1: Klintsy 04/19/2016
 Closing in: the 28-th Separate Motorized Rifle Brigade from Yekaterinburg is being moved to Klintsy, 05/30/2016
28th mechanized infantry brigade in Syria
 It Is Hard To Survive in Syria Without A Passport. Russian 28th Brigade in Syria, November 10, 2015
 Russia Mired in the Ground Operation in Syria. Russian Servicemen Are in Hama Province, November 10, 2015

This material was prepared based on OSINT investigations by volunteers of international intel community InformNapalm.
Author: Irakli Komaxidze

(CC BY) Information is specially prepared for InformNapalm.org; an active link (accessible for search engines) to the authors and our project for any reprint or further use of the material is required.